Oncologists are often required to estimate the survival of patients with incurable malignancies to recommend treatment options and hospice enrolment. In the United States, Canada, and many European countries, hospice referrals require a physician-predicted prognosis of 6 months or less (1). The correct survival prediction during end-of-life discussions can also help to avoid aggressive medical care that is associated with lower quality of life, greater medical care costs and worse caregiver bereavement outcomes (2-4).

There are multiple factors that are important in determining the prognosis of cancer patients, including tumor size, stage, grade and genetics, but none seem to play a significant role in predicting prognosis in end- of-life care (5,6). Many studies have reported that performance status (PS) is a good prognostic indicator in patients with advanced cancer (7-14). In a retrospective study published in 1985, Evans et al. showed a moderate correlation between Karnofsky performance status (KPS) and survival (15). In addition, in a study that observed greater magnitudes of decreases in the palliative performance scale (PPS) associated with worse prognosis, Chan et al. reported that changes in PS are also indicative of prognosis (16).

A literature review by Krishnan et al. showed that 10 of 13 examined models for predicting prognosis (7,9-11,17-24) incorporated PS scores, whether it was KPS, PPS, or Eastern Cooperative Oncology Group Performance Status (ECOG PS) (1). PS has also been used in the enrolment of patients into clinical trials and as a potential stratification factor in the trial analysis. However, despite the clear significance of PS in predicting prognosis, different health care professionals (HCPs) may grade PS differently, thus giving rise to the important question of which PS assessment should be relied upon to guide treatment and trial decisions. Some studies report differences (25,26) while others report similarities (27-29) among different HCPs. The purpose of this systematic review is to investigate the PS scores evaluated by different HCPs, and to assess the inter-rater variability in the assessment scores.

A literature search was conducted in Ovid MEDLINE and OLDMEDLINE from 1946 to Present (July 5, 2015), Embase Classic and Embase from 1947 to 2015 week 26, and Cochrane Central Register of Controlled Trials up to May 2015. Terms and phrases such as “Karnofsky Performance Status”, “Eastern Cooperative Oncology Group Performance Status”, “Palliative Performance Status”, “physician or doctor or nurse or research assistant or clinician or practitioner or specialist”, and “prognostic tool or prognostic instrument” were included in the search. The complete search strategy is displayed in Figures 1-3. Titles and abstracts were then reviewed to identify references that were relevant for full-text screening.

Articles were selected for full-text screening if the title or abstract mentioned PS in addition to the involvement of at least two HCPs. Articles that compared PS of HCPs to patients were excluded. Duplicates of articles found in each database were also omitted.

The literature search yielded 744 articles, with 475 from Embase, 234 from Medline, and 35 from Cochrane (Figure 4). Of those, 18 articles were identified for full-text review as specified by the inclusion criteria; 3 of the 18 articles were rejected after full-text review because of the set exclusion criteria (Table 1) (38,43,44). Of the fifteen remaining articles, eleven compared PS between HCPs of different disciplines (25-29,36,39,41,42,48,49), one between the attending and resident physician (40), two between similarly specialized physicians (45,46), and one between two unspecified-specialty physicians (47). Studies assessed inter-reliability of ECOG PS in four studies (25,27,41,45), KPS in four studies (33,40,48,49), and PPS in one study (29). Four studies (39,42,46,47) examined inter-reliability of both ECOG PS and KPS, while one study (28) compared inter-reliability of ECOG PS, KPS and PPS. One other study (26) examined the inter-reliability of an unspecified PS assessment. 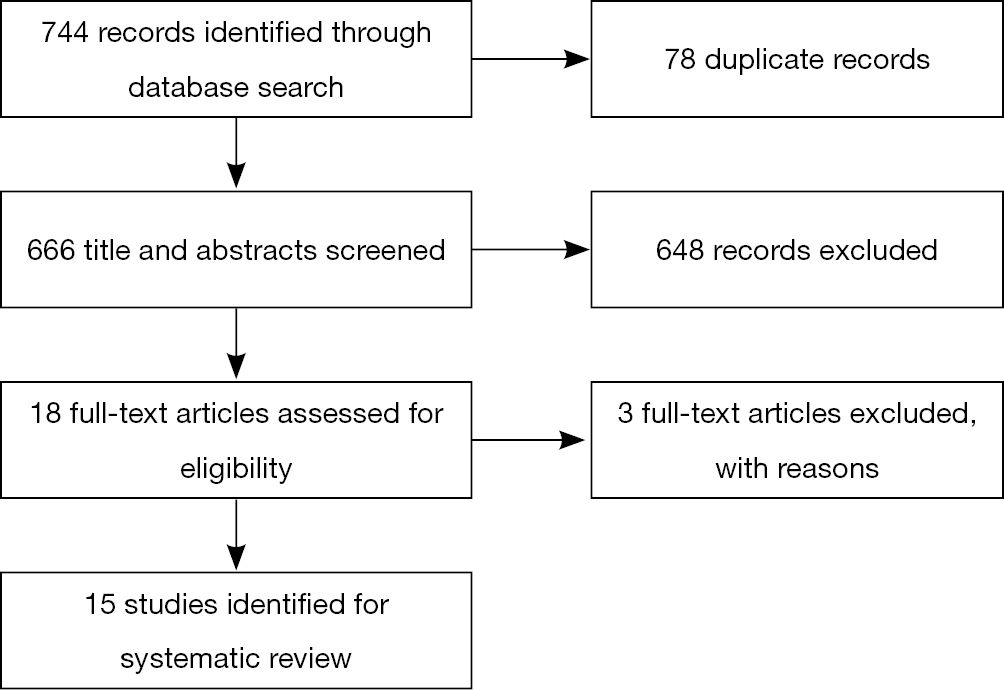 Figure 4 Flow of information for articles included in the systematic review. 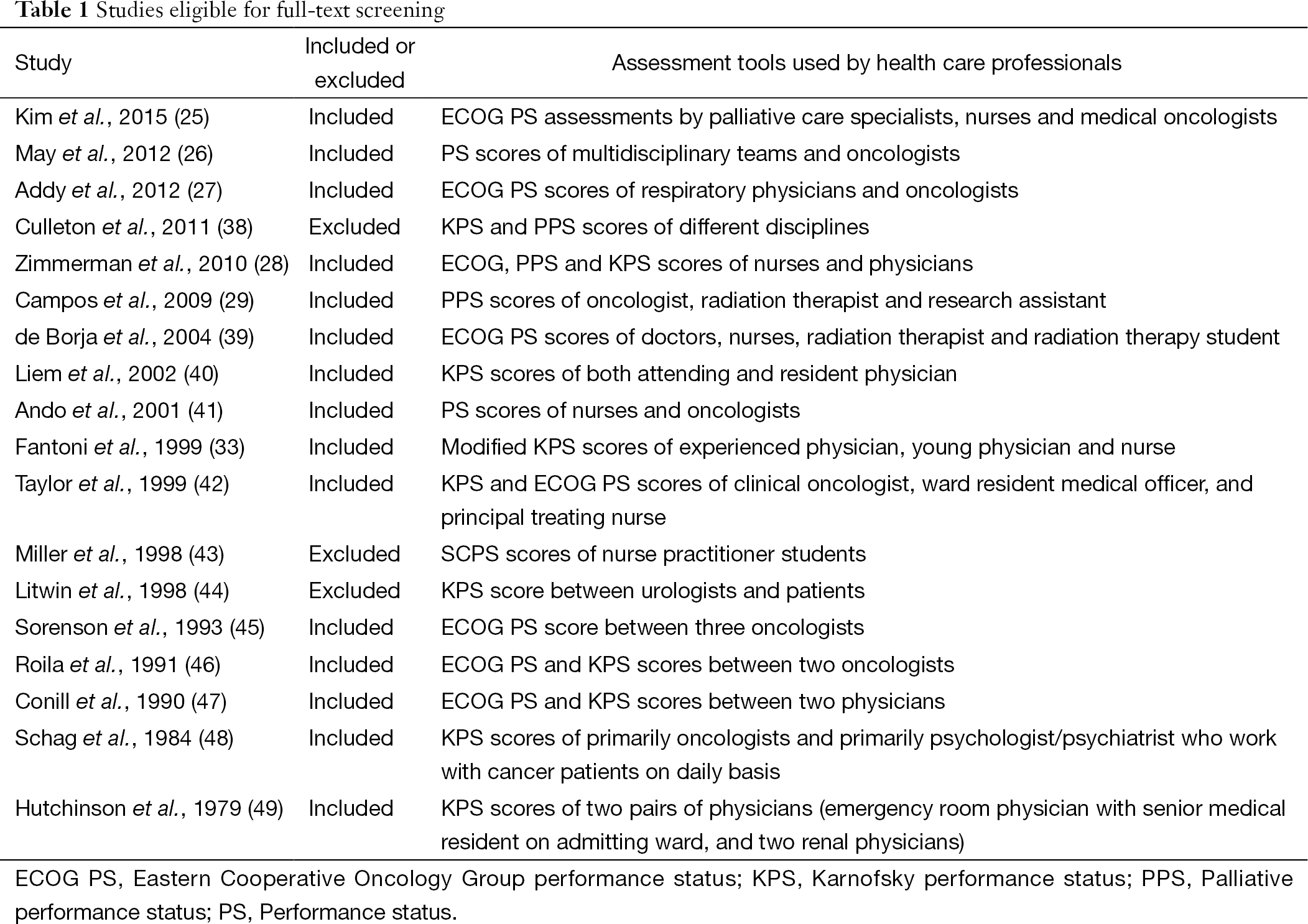 Studies examining the assessment among HCPs 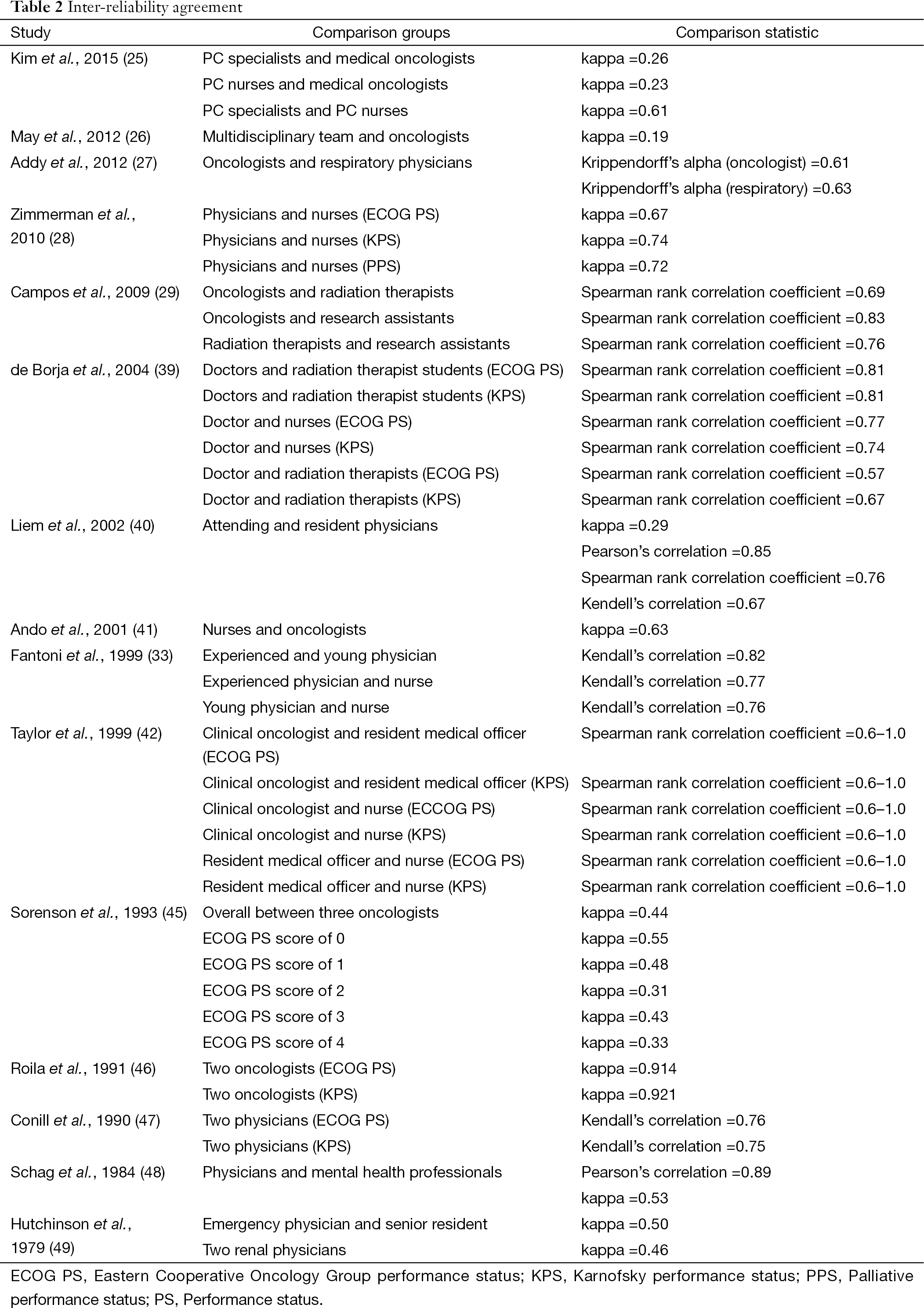 Another four studies (28,41,45,49) reported moderate inter-rater reliability. Zimmermann et al. examined inter-rater reliability for KPS, ECOG PS, and PPS between physicians and nurses; there was moderate reliability for all three tools (kappa =0.74, 0.72, and 0.67, respectively) (28). They reported a healthier assessment by physicians over nurses for the ECOG PS (P<0.0001) and PPS (P<0.0001), but not for KPS (P<0.5) (28). A study by Ando et al. showed moderate agreement between nurses and oncologists in the ECOG PS score (kappa =0.63), with oncologists reporting healthier assessments (41). In Sorenson et al.’s study, inter-rater reliability between oncologists was moderate for ECOG scores of 0, 1, 3 and overall (kappa =0.55, 0.48, 0.43 and 0.44, respectively) (45). ECOG scores of 2 and 4 were just below moderate agreement, with kappa scores of 0.31 and 0.33, respectively (45). Hutchinson et al. reported moderate agreement between an emergency physician and a senior resident’s KPS assessments (kappa =0.50) as well as KPS assessments between two renal physicians (kappa =0.46) (Table 2) (49).

Studies examining the assessment in patients with better vs. worse performance status (PS)

Four studies (29,40,45,46) discovered that inter-rater reliability varied with the nature of the PS; for example, inter-rater reliability would differ between patients with higher and lower PS. Campos et al. reported that doctors and radiation therapists had better agreement at lower ratings, while radiation therapists and research assistants had better agreement at higher ratings (29). In a study by Liem et al. that investigated reliability between the attending and resident physician, stronger agreement was found for KPS scores below 70 (Spearman rank correlation =0.69; Kendall’s correlation =0.61) than for scores greater or equal to 70 (Spearman rank correlation =0.48; Kendall’s correlation =0.43) (40). On the ECOG PS scale, Sorenson et al. reported that ECOG scores of 0, 1, or 2 had a higher chance of agreement (probability =0.92) than ECOG scores of 3 or 4 (probability =0.82) (45). Roila et al. examined both ECOG PS and KPS scales, and observed that the chance of agreement was higher for KPS scores between 50–100 and ECOG PS scores of 0–2 (probability =0.992 and 0.989, respectively) than for KPS scores and ECOG PS scores greater than 50 and 3, respectively (probability =0.882 and 0.909, respectively) (46).

This is the first systematic review assessing the differences in PS ratings by different HCPs. Its findings suggest that there is disagreement in existing literature about the inter-rater reliability between different HCP assessments of PS. While some studies suggest poor agreement, and others suggest moderate agreement, there are a great number of studies that suggest good agreement.

Several factors that might explain the differences in PS scores given by different HCPs include their different medical backgrounds as well as the different assessment techniques that they may employ; differences are a result of the subjective nature of scoring on the impression of patients. For example, medical oncologists place emphasis on documenting efficacy and toxicity while palliative care specialists focus on symptom distress and daily function. Moreover, medical oncologists may have a more optimistic bias in determining PS because they may think that patients with better PS are eligible to continue chemotherapy while those with very poor PS would need to discontinue treatment. This might bias oncologists to perceive the patient as more active than they really are. This difference in perspectives may have resulted in different understandings of the grading systems. Coupled with different alterations of PS scores when they receive unexpected survival findings, HCPs from different backgrounds may assess PS very differently (25).

Despite the reported differences in inter-rater PS scores, the numerous studies highlighting correlation of PS scores suggest, in contrast, that scores are similarly rated across the HCPs. However, while these studies (28,29,33,39-42,45-49) suggest moderate or good correlation, perfect correlation has never been reported. Even among such studies, there still exist differences in the rating of PS scores among HCPs.

The difference of PS scores, whether reported as common (25-27) or uncommon (28,29,33,39-42,45-49), results in either a more optimistic or pessimistic prognosis. It is important to note that the HCPs who typically bring patients into the examination room will have a great understanding of patients’ disabilities (28). As nurses and research assistants generally interact more with patients, they often exhibit a greater understanding of the functionality and mobility of the patients, as well as any of the additional concerns patients may have (28,29). Oncologists, who may not be as aware of patients’ disabilities, often grade patients as both healthier (25,28) and unhealthier (29,33) than what nurses and research assistants report. However, there is no verification in the existing literature that nurses or research assistants rate the PS scores of patients with greater accuracy.

The final consideration is if patients themselves should be the ones to report their PS. It would be necessary to produce educational material and check their understanding. Patient reported outcome measures are a very effective way to achieve a “gold standard” for other problems.

This systematic review was not without limitations. Two of the studies included in this systematic review were published only as abstracts, and hence it was difficult to interpret the reasoning behind the inter-rater reliability statistics. Additionally, studies used different PS assessment tools, whether it was ECOG PS, PPS, KPS or another PS assessment, leading to inconsistencies across the literature that made comparison between studies difficult.