Effect of acupuncture treatment on dysphagia caused by pseudobulbar paralysis after stroke: a systematic review and meta-analysis

Studies were included if they met the following criteria: (I) study design: RCTs; (II) intervention: acupuncture with or without rehabilitation; (III) comparison: rehabilitation treatment without acupuncture; (IV) population: diagnosed as dysphagia caused by pseudobulbar paralysis after stroke, regardless of age, sex or race; (V) outcome: the number of patients who substantially recovered, markedly effective, effective and invalid in the intervention and control groups. We excluded non-RCTs, animal studies, prospective studies, case-control studies, cross-sectional studies, letters, reviews, commentaries, and studies that dysphagia not related to pseudobulbar paralysis after stroke or other unknown diseases. If the study was reported more than once, we would use the latest results. In the course of this work, any differences between the two authors need to be discussed with the third author (DHX) to reach a consensus.

Two groups of four investigators (PW and XMM, JH and JXL) independently reviewed and extracted relevant data from each included report. We extracted the following information: authors, publication year, number of patients, intervention duration, participant characteristics, intervention, acupoints, comparison, efficacy evaluation criteria, and drop-out rate. All results were displayed in the form of figures or tables. Adverse events were also collected from the included studies. The same investigators also assessed the risk of bias from each included study using the Cochrane risk of bias tool. Any differences were resolved by discussion and consensus.

Meta-analysis of RCTs with available data was performed by calculating the effect size [risk ratio (RR)] and 95% confidence interval (CI) using the random-effect models and the Mantel-Haenszel (M-H) method.

The detailed calculation method is shown in Table 1.

Heterogeneity was considered statistically significant at I2>50%. To explore the heterogeneity and stability of the results, we carried out sensitivity analyses. In addition, we conducted subgroup analyses to explore the effects of different interventions.

Publication bias was assessed by visual inspection of funnel plots and formal testing by Egger’s and Begg’s test if more than 10 studies were included.

A total of 1,583 studies were identified by the initial database research. Six hundred studies were excluded because of duplication, and 873 studies were excluded based on the titles and or abstracts. The remaining 110 full-text reports were reviewed for more detailed evaluation. available online: https://cdn.amegroups.cn/static/public/apm-21-3551-01.pdf listed the reasons for excluded articles: the intervention of comparison is non-rehabilitation (n=58); the intervention of treatment group is non-acupuncture or non-acupuncture combined with rehabilitation (n=23); non-RCTs (n=11); reviews or meta-analysis (n=3); participants are not with pseudobulbar paralysis (n=6); duplicated (n=2). Finally, seven RCTs that met our eligibility criteria were included in the present meta-analysis (6-12). The selection process for RCTs included in the meta-analysis is shown in Figure 1. 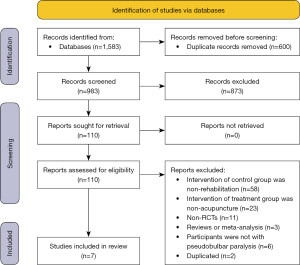 We conducted a graphical summary of bias risk assessment for the 7 included studies (Figures S1,S2). Of these, patients were randomized using a random number table in 5 studies (8-12). The remaining 2 studies referred to“randomization” but did not describe specific randomization methods (6,7). None of the literature described allocation concealment. Due to the nature of acupuncture, blinding of participants and personnel was not attempted in any articles. Only one study clearly stated that results were assessed blindly by a third-party organization (12). All the included literature had complete data for analysis. Except for Yuan’s study, 6 studies have not provided the protocol of its main and secondary outcomes, which were judged as an unknown risk of reporting bias. Other bias was assessed as low risk in all.

The drop-out rate of all studies was 0, except that Chu et al. (9) was 3% (2 cases in the intervention group and 1 case in the control group were caused by recurrence and aggravation of cerebrovascular accident). 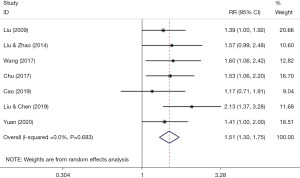 As shown in Figure S5, we implemented sensitivity analyses by systematically omitting a single study step by step, and the result did not change, indicating that our result was stable.

Publication bias was not assessed for outcome since fewer than 10 articles were included.

The mechanism of acupuncture stimulation is considered to be closely related to the nervous system and is expected to improve neurological function after stroke (24). Acupuncture treatment of dysphagia caused by pseudobulbar paralysis after stroke may be related to the swallowing cortex’s excitement (25). Also, acupuncture can promote the establishment of collateral circulation and angiogenesis, improve nerve function, regulate inflammatory factors, regulate the production of inflammatory factors, growth factors, and transcription factors, and effectively reduce nerve injury (26,27). In addition, some animal experiments and clinical trials show that acupuncture mainly regulates the release of neurotransmitters, improves cerebral microcirculation, protects neurons, inhibits inflammation, and so on (28-31).

GB20 and CV23 have become the most frequently used acupoints in the included studies. Therefore, acupuncture in these two acupoints may help to improve dysphagia caused by pseudobulbar paralysis after stroke. According to the standard acupoints of the World Health Organization (WHO Western Pacific Regional Office, 2008), GB20 is located at the back of the neck, suboccipital depression, between the origin of the sternocleidomastoid muscle and the trapezius muscle, and the surrounding anatomical tissue includes the sternocleidomastoid muscle, trapezius muscle, head clamp muscle and branches of the lesser occipital nerve. Another important acupoint CV23 was located in the anterior part of the cervical midline, above Adam’s tubercle, and in the depression of the superior margin of the hyoid bone. The surrounding anatomical tissues include the suprahyoid muscle, facial nerve, glossopharyngeal nerve, hypoglossal nerve branch, and vagus nerve branch. Studies have shown that electroacupuncture stimulation of CV23 activated the swallowing-related neurons of (VLM) in the ventrolateral medulla of rats, and promoted swallowing activity in rats, 5-hydroxytryptamine (5-HT1A) in the nucleus of the solitary tract (NTS) may play an essential role in this excitatory effect (32,33).

Overall, this meta-analysis demonstrates the efficacy of acupuncture in treating dysphagia caused by pseudobulbar paralysis after stroke, although more high-quality RCTs are needed. In terms of treatment, we have also found that acupuncture combined with rehabilitation has a better effect, which may have some implications for clinical practice.

This study has several limitations. Firstly, we paid attention to the efficacy of acupuncture in the treatment of dysphagia caused by pseudobulbar paralysis, but there was no comparison and research on true bulbar paralysis. Then, due to the small number of studies included, the design of RCTs was not strict, which may have an impact on the accuracy of the results. Besides, all studies were conducted in China, and it was impossible to evaluate the efficacy of acupuncture in different regions and different ethnic groups.

At present, there is no unified standard for the treatment of dysphagia caused by pseudobulbar paralysis after stroke. This meta-analysis fully confirmed that acupuncture could effectively improve dysphagia caused by pseudobulbar paralysis after stroke, and acupuncture combined with rehabilitation has a better effect. However, because the included studies’ quality was not high enough, the findings should be interpreted with caution. Also, further high-quality RCTs are needed.

The authors thank anyone who contributed to the article.

Reporting Checklist: The authors have completed the PRISMA reporting checklist. Available at https://apm.amegroups.com/article/view/10.21037/apm-21-3551/rc

Conflicts of Interest: All authors have completed the ICMJE uniform disclosure form (available at https://apm.amegroups.com/article/view/10.21037/apm-21-3551/coif). The authors have no conflicts of interest to declare.