Amyotrophic lateral sclerosis (ALS) is a neurodegenerative disease, also known as Charcot disease or Lou Gehrig disease. The total prevalence of ALS is [2–9]/100,000, with an annual incidence rate of 3/100,000. The average incidence rate in Beijing alone was 0.38 cases/10 years, with an average age of 48.88±11.35 years [95% confidence interval (CI): 48.17–49.85] (1). The disease progresses rapidly and clinically is considered to be progressive degeneration of the upper and lower motor neurons. According to the diagnostic criteria of Neurology branch of Chinese Medical Association, the signs of upper and lower motor neuron damage in three areas (including brainstem, brachial plexus, trunk and lumbosacral muscles) are positive for ALS, and the signs of upper and lower motor neuron damage in two areas are accompanied by upper motor neuron damage and develop upward, or signs of upper motor neuron damage on the basis of lower motor neuron damage, which is the proposed ALS. Traditionally, it is classified as a neuromuscular disease (2). Most cases of ALS are sporadic (SALS), but up to 10% are classified as familial (FALS) (3). At present, it is considered that there are >50 gene mutations related to FALS, of which >30 are considered to be pathogenic factors. The most common FALS mutant genes include superoxide dismutase-1 (SOD1), chromosome 9 open reading frame 72 (c9orf72), fusion sarcoma (FUS) and tar DNA binding protein (TARDBP) (4,5). Currently, there is no effective treatment for ALS, especially FALS, so the aim of this case report is to provide a reference for the diagnosis and treatment strategy through a review of the diagnosis and treatment of a patient with FALS caused by SOD1 mutation. We present the following article in accordance with the CARE reporting checklist (available at https://dx.doi.org/10.21037/apm-21-3254).

A 19-year-old male presented in April 2018 with the chief complaints of weakness of the left leg, limited movement of the left foot muscle atrophy and muscle fasciculation in both legs, which had begun and progressed since he had been accidentally injured 4 months prior. He could stand, but dragged the left leg while walking. He did not have back pain or numbness of limbs and back. Speech was also affected but there was no choking cough or dysphagia. Electromyography (EMG) in the local hospital showed extensive neurogenic damage (involving the medulla oblongata, neck, chest and waist), but no abnormality on lumbar magnetic resonance imaging (MRI). After treatment with B vitamins, the patient’s symptoms did not improve significantly and he was referred to our department (The Fifth Affiliated Medical College of Guangzhou University of Chinese Medicine).

The patient gave a personal history of full-term spontaneous labor, no history of birth injury or asphyxia, and normal growth and development since childhood. His parents were not close relatives. However, an uncle, maternal grandmother, and the maternal grandmother’s sister and two younger brothers had similar medical histories: the uncle died at age 43, with symptoms similar to those of the patient, including lower limb weakness and muscle atrophy. Combined with EMG and other evaluation results, his uncle was definitely diagnosed with ALS, and his gene test report also suggested SOD1 mutation. The maternal grandmother died at about age 40, but details were unknown. His mother had back muscles and jumping movement of both lower limbs, without obvious limb weakness.

Genetic testing was performed to guide diagnosis and treatment. A 2-mL sample of venous blood was collected from the patient, his parents, grandparents, brothers and sisters, aunts and cousins to extract genomic DNA for ALS2, ELP3, MATR3, SIG, MAR1, UBQLN2, ANG, ERBB4, NEFH, SOD1, UNC13a, ATXN2, FIG4, OPTN, SPAT, VAPB, BSCL2, FUS, PARK7, SPG11, VCP, c19orf12, GARS, PFN1, SPG7, VEGFA, c9orf72, GRN, PNPLA6, SQSTM1, VPS54, CHMP2b, hnRNPA1, PRPH, TAF15, DAO, LMNB1, PRPH2, TARDBQ, DCTN1 Exon coding region of MAPT, SETX and TRPM7 genes. The results (Figure 1) showed that the patient, his younger sister, his younger brother, his mother, aunt and cousin had a heterozygous mutation of SOD1 c.456 g > C (p.g142a), which was the same as for the deceased uncle. No genetic mutations were detected in the patient’s father, eldest sister, second sister, cousin and grandfather (Figure 2). The results of EMG of his mother and aunt showed neurogenic damage of the upper and lower limbs and paraspinal cord. SOD1 c.425g > C (nucleotide 425 in the coding region changes from guanine to cytosine) mutation, resulting in amino acid change P.g142a (amino acid 142 changes from glycine to alanine), which is a missense mutation. Using polyphen-2 (http://genetics.bwh.harvard.edu/pph2/index.shtml), we performed a bioinformatics analysis of this gene mutation and found that its frequency in the database of normal population was 0. Protein function prediction was conducted with online tools SIFT and PROVEAN (Protein Variation Effect Analyzer), which website is http://provean.jcvi.org/protein_batch_submit.php and the results showed that Protein function of missense mutation was deleterious. The patient was finally diagnosed as FALS, and the family was confirmed as FALS. Edaravone 30 mg twice daily by intravenous drip and Shenqi Fuzheng by intravenous drip were administered to the patient in hospital for 2 weeks, then as a course of treatment every 6 months. Riluzole tablets is administered as 50 mg every 12 h. After 2 years of follow-up, the patient’s symptoms had not progressed significantly. The mother, brothers and sisters were not treated; the mother has no new symptoms such as muscle weakness, and the brothers and sisters have no disease symptoms yet. 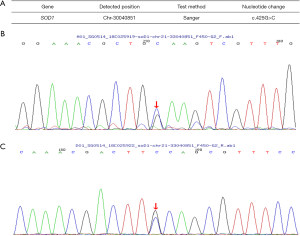 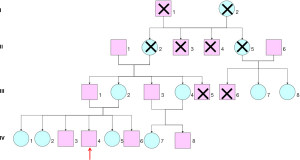 Figure 2 Patient’s pedigree. Red arrow indicates the proband (IV4). The same gene mutation was found in IV5 and IV6 in this gene test, but without clinical symptoms. III2 is the mother of the proband and has the same gene mutation, with twitching of her back and leg muscles, but no obvious limb weakness. The crosses showed in this figure indicated the member was dead. The square refers to a male member in this family and the circle refers to a female.

All procedures performed in this study involving human participants were in accordance with the ethical standards of the institutional and/or national research committee(s) and with the Helsinki Declaration (as revised in 2013). Written informed consent was obtained from the patient for publication of this case report and accompanying images. A copy of the written consent is available for review by the editorial office of this journal.

The symptoms of ALS are muscle weakness and atrophy, speech difficulties, swallowing and respiratory dysfunction due to progressive degeneration of upper and lower motor neurons. Familial cases account for ~5–10% (6), and there are 22 subtypes of pathogenic genes, of which the mutation rate of SOD1 in ALS is 2–7%, and that in FALS is ~20% (7-10).

SOD1 is a ubiquitous enzyme that catalyzes the conversion of superoxide radicals to oxygen and hydrogen peroxide. The gene is located in band 2, region 2, of the long arm of chromosome 21 (21q22.11). It contains 5 exons with a total length of about 11 kilobase. The encoded SOD1 protein contains 153 amino acids. More than 170 mutation types have been found worldwide (11), scattered the full length of the SOD1 protein, and the common mutation sites are A4V, D90A, D96A, D96N and ILL3T. Excepting the D90A and D96N loci, which can be dominant or recessive inheritance, the other loci are autosomal dominant inheritance.

Because the mutations are dispersed throughout the SOD1 structure, the exact molecular mechanism leading to ALS pathology has not been determined (12). The clinical manifestations of patients can differ according to the mutation site. Even with the same mutation site, the clinical manifestations of patients can be heterogeneous. At present, it is speculated that the mechanism of the toxic effect on motor neurons is related to oxidative damage, abnormal mitochondrial function, abnormal glial transmitter release and astrocyte-mediated, cytotoxicity of specific proteins, abnormal aggregation of proteins, autophagy activation of lymphocytes, neurogrowth factor and glutamate excitotoxicity, post-translational modification, etc. (13-17).

There was not a detailed medical history report on this family with this gene mutation. The patient and the uncles with a medical history and gene examination in had common symptoms of lower limb motor element injury and poor prognosis. The family shows maternal inheritance, but the brothers and sisters of the patient do not carry this gene; however, EMG examination was not performed, so it is uncertain whether there are subclinical symptoms, and not completely clear whether there is incomplete penetrance or a variable degree of expression. Therefore, follow-up of the family has great significance for the understanding of the genetic mutations of ALS.

In terms of diagnosis, it is particularly important to detect the pathogenic gene in other members of a FALS family, carry out genetic counseling, and prevent the birth of children with the pathogenic gene through prenatal gene diagnosis technology. It is also of great significance to actively follow up the family members carrying pathogenic genes but show no symptom, and take active treatment to delay the time of onset as long as possible, improve the quality of life and prolong their life span. At the same time, it is also recommended to detect peripheral neuropathy and autoimmune diseases in patients in order to provide more evidence for differential diagnosis.

In terms of treatment, drugs with clinically efficacy data, such as Taitai and edaravone, are powerful but their long-term clinical application is limited because of their limited curative effect, strong side effects and high cost. In this case, the medications were administrated followed Chinese guidelines for diagnosis and treatment of amyotrophic lateral sclerosis. Therefore, Riluzole was used for prolonging the life of patients in ALS and prolonging the time when they need mechanical ventilation support. What’s more, edaravone scavenged free radicals and inhibited lipid peroxidation, so as to inhibit the oxidative damage of nerve cells according to previous study (18). Therefore, it is necessary to further expand research and explore the treatment of integrated traditional Chinese and Western medicine in order to improve the quality of life and prolong the life span of ALS patients.

Reporting Checklist: The authors have completed the CARE reporting checklist. Available at https://dx.doi.org/10.21037/apm-21-3254

Conflicts of Interest: All authors have completed the ICMJE uniform disclosure form (available at https://dx.doi.org/10.21037/apm-21-3254). The authors have no conflicts of interest to declare.

Ethical Statement: The authors are accountable for all aspects of the work in ensuring that questions related to the accuracy or integrity of any part of the work are appropriately investigated and resolved. All procedures performed in this study involving human participants were in accordance with the ethical standards of the institutional and/or national research committee(s) and with the Helsinki Declaration (as revised in 2013). Written informed consent was obtained from the patient for publication of this case report and accompanying images. A copy of the written consent is available for review by the editorial office of this journal.