Depression is a common and serious mental disorder affecting 16% of the world’s population. It is characterized by general depression, loss of interest in usual activities, and is accompanied by symptoms such as physical discomfort (1). Nowadays, there are many antidepressants, including selective serotonin reuptake inhibitors (SSRIs), monoamine oxidase inhibitors (MAOIs), and tricyclic antidepressants (TCA). Emerging evidence has shown that depression is associated with inflammation (2). Clinical studies have suggested that compared with healthy people, patients suffering from depression have higher circulating levels of pro-inflammatory cytokines (3). Animal experiments have also demonstrated that depressed mice produced large amounts of cytokines including interleukin-6 (IL-6), interleukin-1β (IL-1β), and tumor necrosis factor-α (TNF-α) in the serum and brain tissue (4). In addition, some meta-analyses found that pro-inflammatory cytokines are positively correlated with depression. However, the mechanism involved has not yet been clearly investigated. IL-1β is an important neuroendocrine mediator, and its production and secretion are mainly regulated by the inflammasome. The nucleotide-binding oligomerization domain-like receptor family NLRP3 inflammasome is a cytoplasmic receptor containing NLRP3, ASC, and caspase-1 (5). Therefore, regulating the TLR4-NLRP3 signaling pathway and further inhibiting neuroinflammation may be a treatment strategy to improve depression. Safflower (Carthamus tinctorius L.) has long been a hot topic of research due to its diverse chemical components as well as extensive pharmacological effects. More and more studies have shown that safflower extract (SE) could inhibit inflammation and oxidation, protect the heart, and enhance immune function (6). Studies have shown that spermidine in safflower can alleviate depression symptoms, but the underlying mechanism is not yet clear (7). Whether SE can inhibit inflammation by inhibiting the TLR4 signaling pathway in depression remains unclear. In this study, we speculated that SE could treat depression through the inhibition of TLR4 activation and NLRP3 downregulation. To test this hypothesis, we established a mouse model of depression to investigate the effect of SE on the expression of the inflammatory cytokines TLR4 and NLRP3.

We present the following article in accordance with the ARRIVE reporting checklist (available at https://dx.doi.org/10.21037/apm-21-1728).

A total of 60 adult male ICR mice (18–22 g) were purchased from the Laboratory Animal Center, Zhongshan School of Medicine, Sun Yat-sen University. Mice were placed in cages alone for about 1 week to let them adapt to the environment under standard housing conditions: 12 h light/12 h dark cycle; abundant food and water supply; temperature maintained at 22±2 °C and humidity of 50%±10%. All animal experiments were approved by the Animal Experiment Ethics Committee (AEEC) of Zhongshan School of Medicine and were in compliance with the Guide for the Care and Use of Laboratory Animals.

After 1 week of adaptation to the new environment, the mice in the control group were kept in a separate room and the other 5 groups were modeled for depression. These animals were exposed to stress every week, including 12 h without food, 5 min cold swimming, 10 min cage shaking, 30 min behavior restraint, 5 min tail pinch, 8 h light/dark reversal, and 12 h cage tilting with a 45° angle. We applied stressors continuously during the day and night individually. In order to prevent the habituation of mice to the stressor and ensure the unpredictability of stressors, all stressors were randomly arranged within a week and repeated throughout the experiment.

In the first 24 h, 2 bottles (same bottle) of 1% (w/v) sucrose solution (SS) were placed in each cage in order to train mice to adapt to the SS. After 24 h of adaptation, we replaced 1 bottle of SS with cooled boiled-water (CBW) in the same bottle. The positions of the water bottle and the SS bottle were exchanged every 12 h to avoid any influence caused by the bottle location. When these mice adapted to the SS, we deprived them of water and food for 12 h. At 24 h later, the volumes of SS and CBW consumed were calculated. Sucrose preference (SP) = volume of SS consumption/(volume of CBW consumption and volume of SS consumption) ×100%.

Locomotor activity was measured by the OFT. The testing field consisted of a lighted glass-box (100 cm long, 100 cm wide, and 50 cm high) and a real time monitoring system. The test subject was initially placed right in the bottom center of the box, and was allowed to move freely in the box. Then, the total movement distance during 60 min was recorded automatically.

The test subject was put in an open cylindrical glass water tank (diameter 20 cm, height 40 cm) filled with water of 25 cm depth at 22±1 °C. The environment around the tank was kept quiet when the test was conducted. The mice were placed in the cylinder individually for 6 min, and immobility time was recorded during the last 4 min of the test. The mouse was considered immobile only when it floated in the water without struggling. After each experiment, the used water was changed with fresh water.

The mouse was suspended by its tail in a box (25 cm long, 25 cm wide, and 30 cm high) with its head 5 cm above the bottom of the box. The test was also conducted in a relatively quiet environment as described before. The mouse was suspended for 6 min, and the immobility time was recorded in the last 4 min. The mouse was considered immobile when it was passive and completely immobile. The test process was recorded with a monitoring system and analyzed by a researcher.

After the depression-related behavioral tests, all mice were sacrificed. Serum was obtained from the abdominal artery, and brain tissue was also collected from each mouse and stored in a freezer at −80 °C for further analysis. SOD (Superoxide dismutase), MDA (Malondialdehyde), and GSH-Px (Glutathione peroxidase) were tested using ELISA kits (Nanjing Jiancheng Institute of Bioengineering, Nanjing, China). Expression levels of 5-hydroxytryptamine (5-HT), norepinephrine (NE), tumor necrosis factor-α (TNF-α), interleukin-1β (IL-1β), and interleukin-6 (IL-6) in the hippocampal tissue and prefrontal cortex tissue were all measured by ELISA kits (R&D system, USA) according to the protocol provided in the kit. The concentration was set according to the manual of the kit and was calculated with reference to the standard curve.

Mice were sacrificed after the behavioral tests. Under disinfected conditions, the hippocampal tissue and prefrontal cortex tissue were quickly removed from each mouse brain and kept in cold (4 °C) saline solution. Tissue samples were homogenized in radioimmunoprecipitation assay lysis buffer (RIPA lysis buffer, containing protease inhibitor), then centrifuged at 12,000 ×g for 15 min. The supernatant was then collected at 4 °C. The BCA protein assay and western blot were performed to determine protein concentration. The proteins were separated by SDS-PAGE and then transferred to a polyvinylidene fluoride membrane (Millipore Company, Bedford, Mass.). The membrane was blocked with 5% bovine serum albumin at room temperature for 1 h, and the primary antibody was incubated overnight at 4 °C. Then, the membrane was incubated with a horseradish peroxidase (HRP)-conjugated secondary antibody. The main antibodies used included toll-like receptor type 4 (TLR4) (1:1,000), p-p38/p38 (1:1,000), p-NF-κb/NF-κb (1:1,000), NLRP3 (1:1,000), and caspase-1 (1:1,000). The membrane was then incubated with the enhanced chemiluminescence reagent (Perkinelmer) and secondary antibody (Chemicon). Data was obtained by a molecular imager.

GraphPad Instat 5.0 software was used for statistical analysis. Analysis of variance and Tukey’s multiple comparison test were used. The results are expressed as mean ± standard deviation. Statistical significance was considered if P<0.05.

The effect of SE on the SPT

The effect of SE on the depression-like behaviors of mice 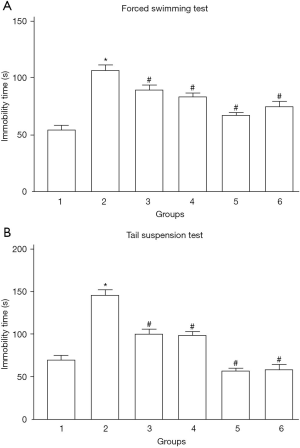 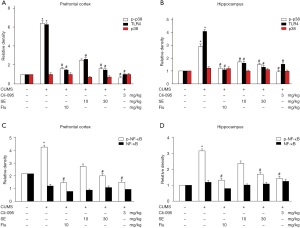 The effect of SE on the expression of the NLRP3 inflammasome

Reporting Checklist: The authors have completed the ARRIVE reporting checklist. Available at https://dx.doi.org/10.21037/apm-21-1728

Conflicts of Interest: All authors have completed the ICMJE uniform disclosure form (available at https://dx.doi.org/10.21037/apm-21-1728). The authors have no conflicts of interest to declare.

Ethical Statement: The authors are accountable for all aspects of the work in ensuring that questions related to the accuracy or integrity of any part of the work are appropriately investigated and resolved. All animal experiments were approved by the Animal Experiment Ethics Committee (AEEC) of Zhongshan School of Medicine and were in compliance with the Guide for the Care and Use of Laboratory Animals.