Seborrhea is caused by an excessive secretion of sebum by the sebaceous glands that are densely distributed on the forehead, nose, scalp and back. Inflammation of the skin, erythema, scales, or fungal infection can cause seborrheic dermatitis. Acinetobacter colonization with a secondary inflammation results in acne. Additionally, follicular worm infection and abnormal skin vascular function contribute to rosacea. Hence, seborrhea is generally considered as an independent disease, and is also an important symptom in the development of acne, rosacea, seborrheic dermatitis, seborrheic alopecia and other diseases. The causes of seborrhea may be related to high androgen levels, genetics, diet, metabolism, age, mental stress and other factors, and may also be significantly related to digestive tract dysfunction (1). Specifically, high androgen levels may be the key cause of seborrhea, and evidence has been provided that the rate of sebum secretion is higher in men than in women (2). The amount of sebum secretion in individuals overlaps exactly with the three peaks of hormone levels. The sebaceous glands are active in infants during the first 3 months of life under the influence of androgens from the mother, and gradually return to normal levels thereafter. During puberty, androgen levels rise again, sebaceous glands become hypertrophic, and sebum production increases. In women after menopause, sebum secretion decreases, as well as in men after the age of 70 years (3,4)

Numerous studies have shown that intestinal flora-metabolites are closely related to the development of several diseases, such as chronic kidney disease (5). Particularly, the interaction between intestinal flora and intestinal epithelial cells and neuronal immune cells can cause a series of endocrine and neuroimmune responses. Recently, it has been found that dysbiosis of the intestinal flora results in changes in androgen levels, disturbances in lipid metabolism, insulin resistance, and production of inflammatory factors, which are extremely associated with obesity, metabolic syndrome, reproductive and gastrointestinal diseases, and gynecological tumors (6-10). Therefore, we hypothesized that dysbiosis of the intestinal flora may also be inextricably linked to seborrhea.

Ultra-performance liquid chromatography/quadrupole time-of-flight mass spectrometry (UPLC-QTOF/MS) technology is widely used in various fields. UPLC-QTOF/MS based untargeted metabolomics analysis has been widely used in metabolomics research in recent years. This technique provides the maximum amount of information about the central carbon cycle metabolism, and can characterize and quantify as many metabolites in biological systems as possible, reflecting the total metabolite information to the maximum extent. It also has high sensitivity and separation for metabolites that are difficult to volatilize or have poor thermal stability. In this study, we performed a non-targeted metabolomic analysis of the gut flora of seborrheic patients and healthy individuals based on UHPLC-Q-TOF-MS technique, which is reported below.

We present the following article in accordance with the MDAR reporting checklist (available at http://dx.doi.org/10.21037/apm-21-331).

The study was conducted in accordance with the Declaration of Helsinki (as revised in 2013). The study was approved by medical ethics of Dongguan Tungwah Hospital and informed consent was taken from all individual participants.

This study enrolled 10 healthy individuals (6 males and 4 females) and 10 patients with seborrheic dermatitis (6 males and 4 females) who were admitted to the Department of Dermatology of Donghua hospital (Dongguan, China) between October 2019 and April 2020. The median age of the patients and healthy subjects was 44.71±5.22 years (range, 31–57 years) and 45.86±5.93 years (range, 34–57 years), respectively. The study included the patients who exhibited the symptoms including facial oiliness, scalp oiliness, scalp scaling, and scalp erythema; were accompanied by seborrheic dermatitis, acne and folliculitis; originally intended to cooperate with the investigator in collecting fecal specimens; have lived in Dongguan for more than 2 years. All healthy participants, randomly selected with similar gender, age and body index as the enrolled patients, showed no seborrhea symptoms and settled in Dongguan for more than 2 years. Patients or healthy individuals who had taken glucocorticoids, antibiotics, probiotics, immunosuppressants, retinoids, herbal medicines within 6 months, were pregnant or lactating, smoked and drank, had malignancies or other serious internal diseases, had intestinal diseases, and had gastric and lower gastrointestinal surgery, were not included in this study.

Original data were converted into the mzXML format by ProteoWizard, and then the XCMS program was used for peak alignment, retention time correction, and peak area extraction. The metabolite structure was identified with accurate mass matching (<25 ppm), secondary spectrum matching, and detected by the laboratory’s self-built database.

DNA was extracted using QIAamp DNA Stool Mini Kit following the manufacturer’s description. Then 6S V3-V4: 341F-806R, 18S V9: 1380F-1510R, ITS1: ITS1F- ITS2R. 16S/18S rRNA genes were amplified used the specific primer (Table 1) with the barcode, followed by confirmation by PCR and purification with Agencourt AMPure XP beads. Next, the 16S rRNA sequencing was performed with an Illumina MiSeq platform. The obtained reads were analyzed using the QIIME 1.9.1 package after a quality filtering and removal of ambiguous nucleotides. Amplicon sequences were clustered into operational taxonomic units and used to characterize microbiota diversity. Sequences not aligning the references were excluded. 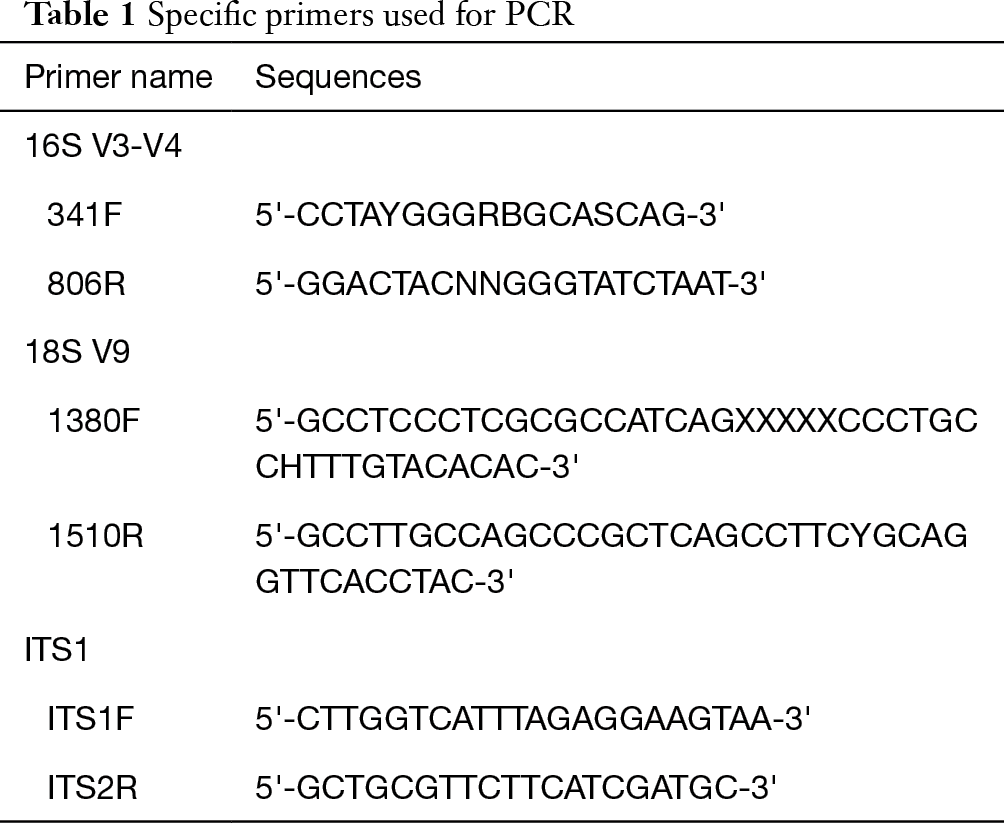 When comparing the positive ion and negative ion modes of UHPLC-QTOF-MS, we found their response intensity and most retention time of peaks overlapped (Figures 1 and 2). This indicated that the variation due to instrument error was minor, the system was stable, and the data were stable and reliable. The differences in metabolic profiles were reflections of biological differences between samples. The ion peaks of metabolites were isolated using XCMS software and calculated. The peaks of all the experimental samples and QC samples were presented in the PCA model through Pareto-scaling. As revealed in Figure 3, the QC samples in the positive and negative ion modes were closely clustered together, indicating good repeatability of this experiment. The correlation coefficients all exceeded 0.9, indicating a good correlation between the 2 modes (Figure 4). 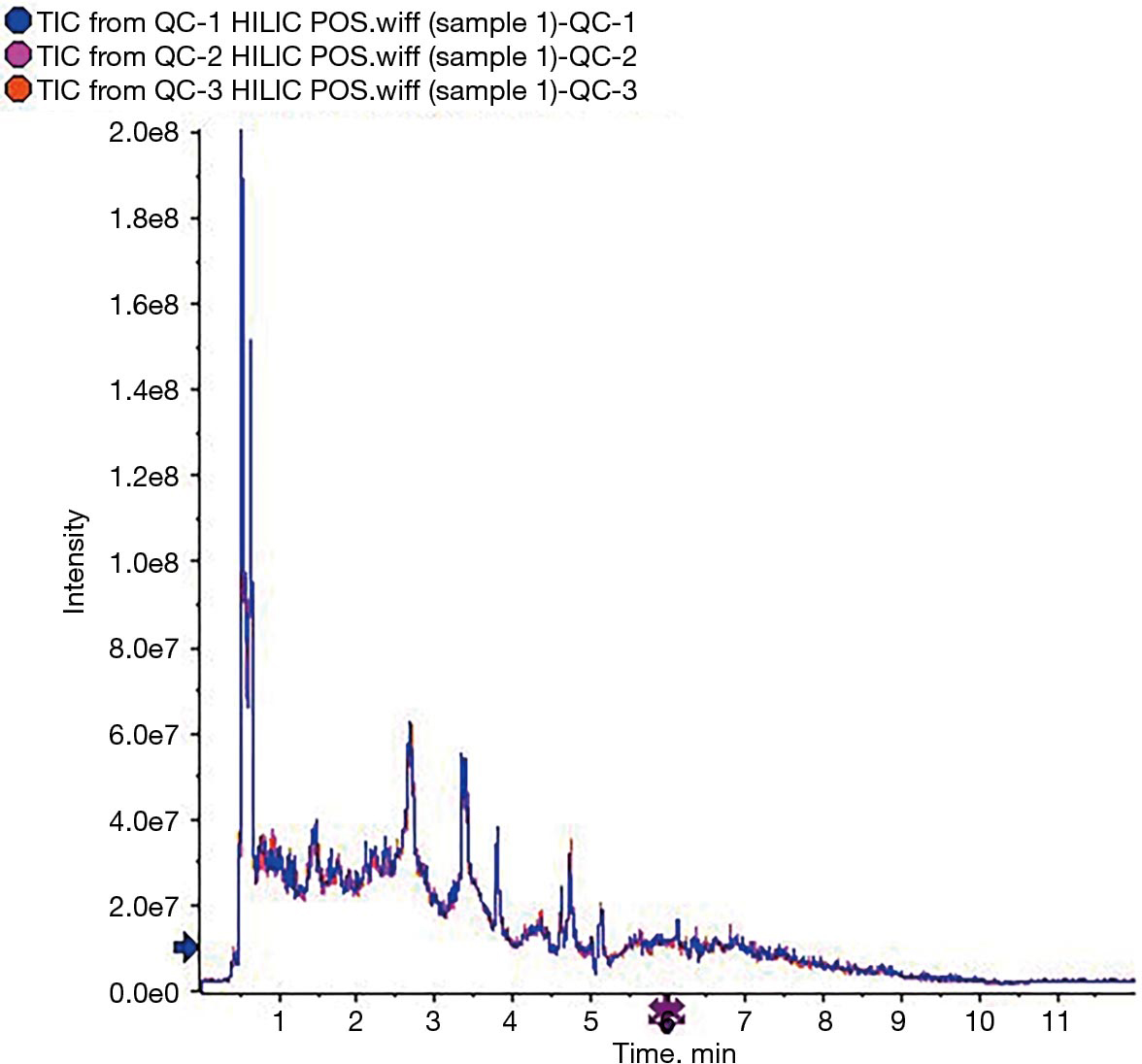 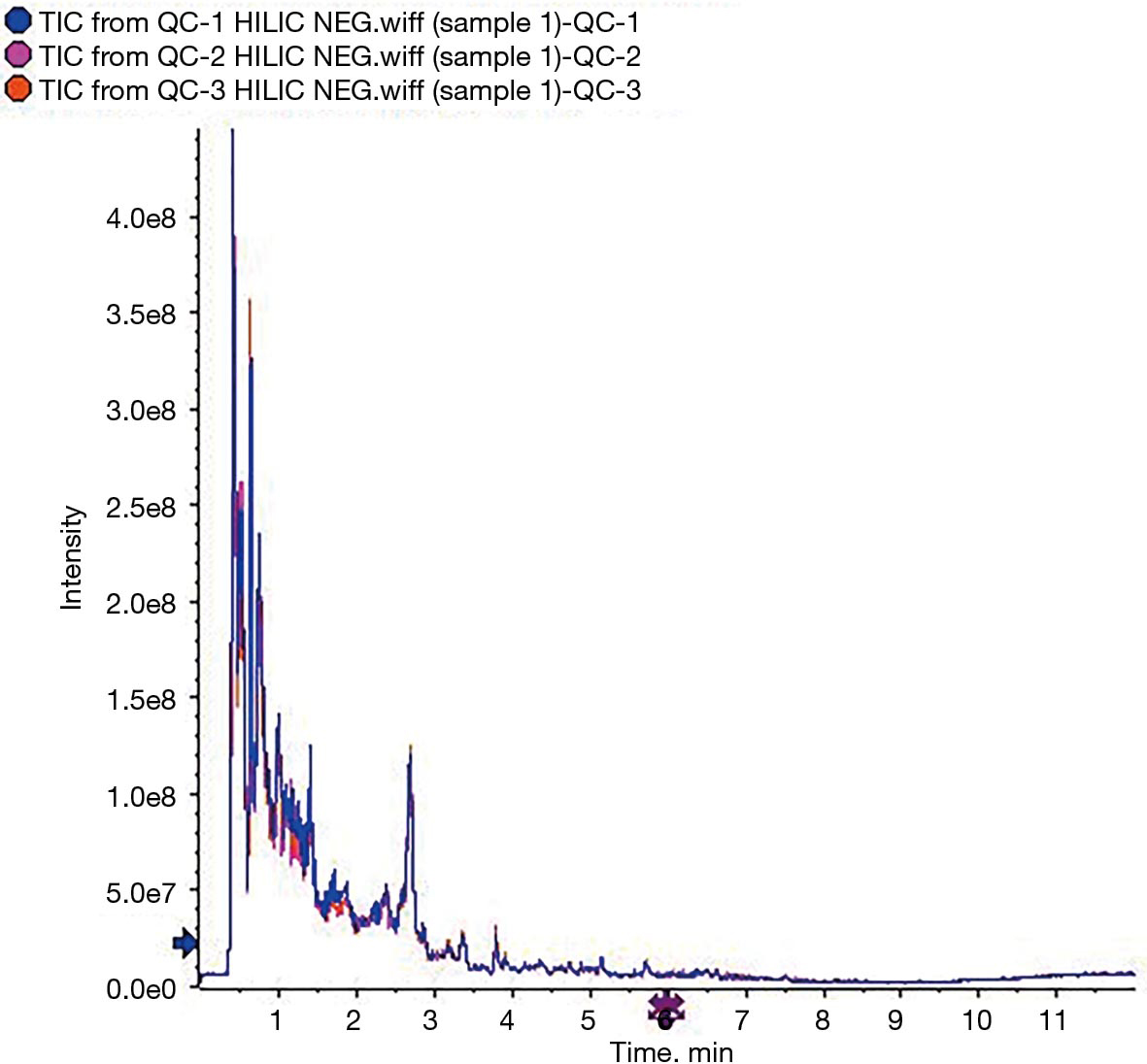 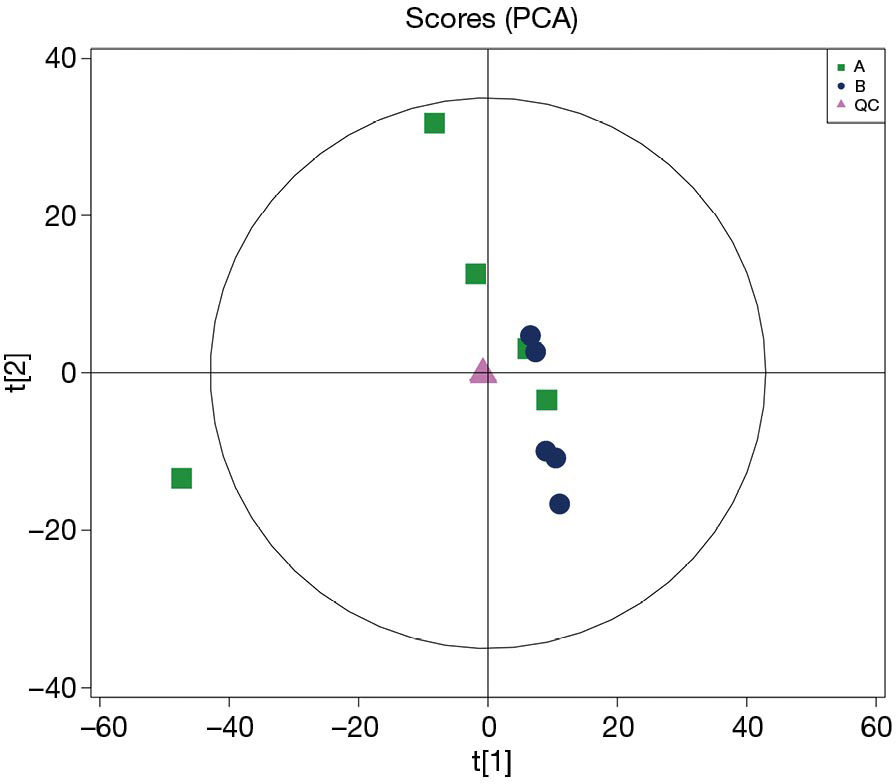 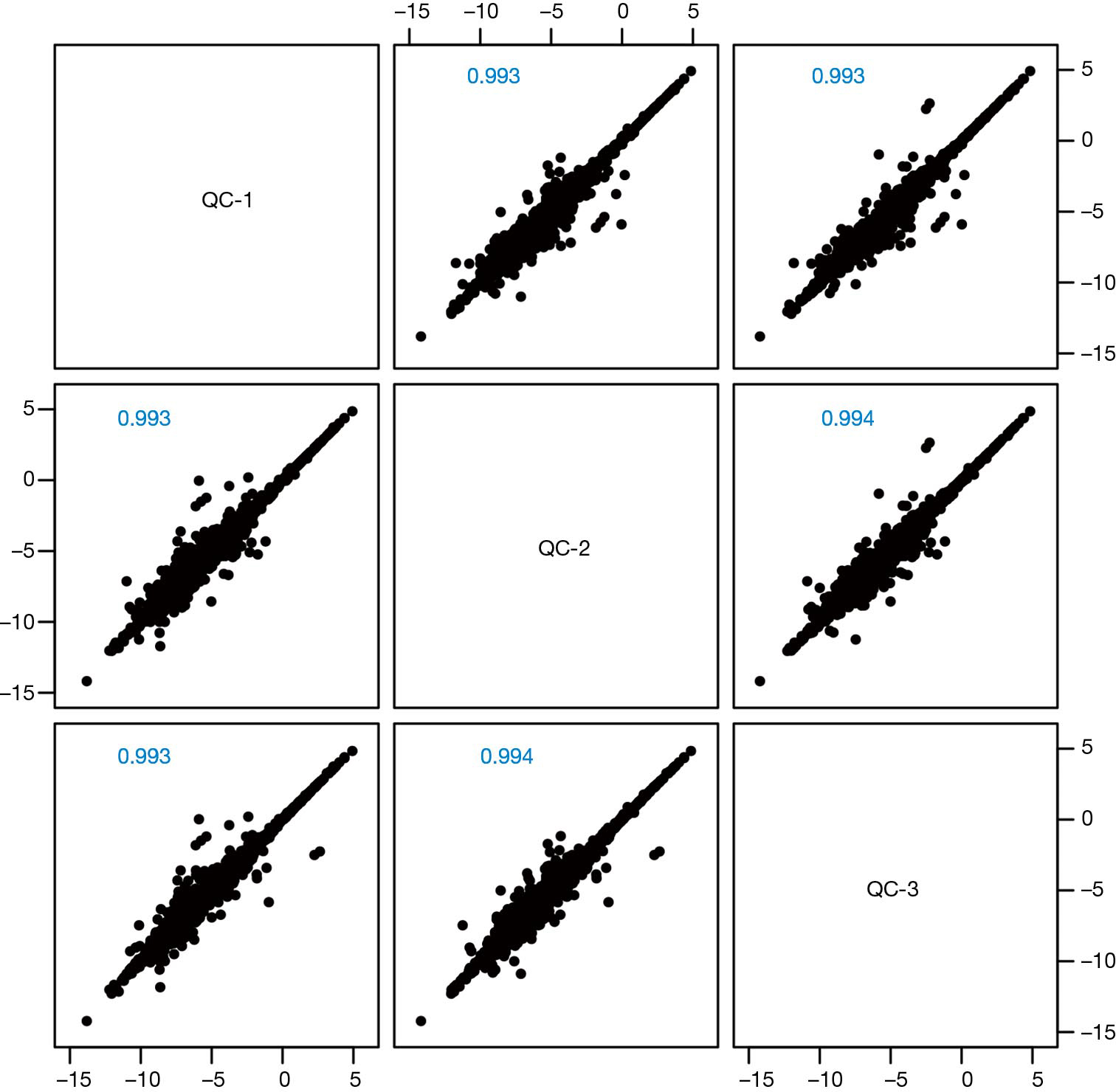 OPLS-DA was performed to model the relationship between metabolite expression and sample category in negative and positive ion modes (Figures 5 and 6). It was clear that samples of the healthy control group were all distributed in the right area, and the seborrhea group samples were distributed in the left area, which indicated a significant difference in composition between the 2 groups. The volcano plot of the univariate statistical analysis screened the differential metabolites (red), with fold change (FC) >1.5 and P value <0.05 in the positive ion mode (Figure 7). Furthermore, 45 differential metabolites were screened by multivariate statistical analysis with variable importance in projection (VIP) >1 and univariate statistical analysis with P<0.05, and some of the metabolites are shown in Table 2. 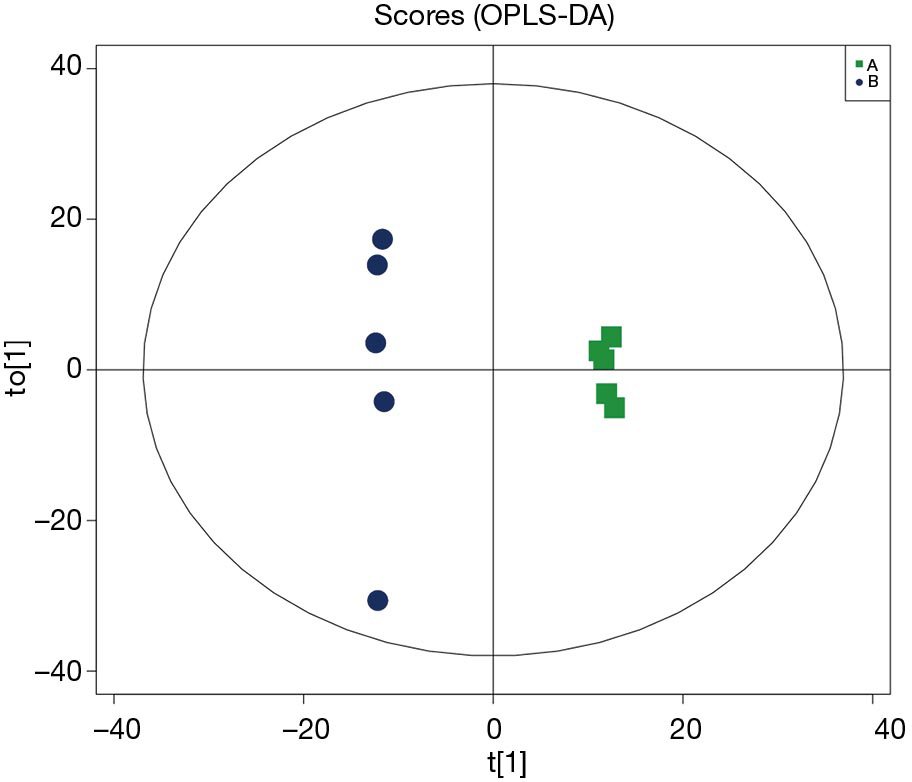 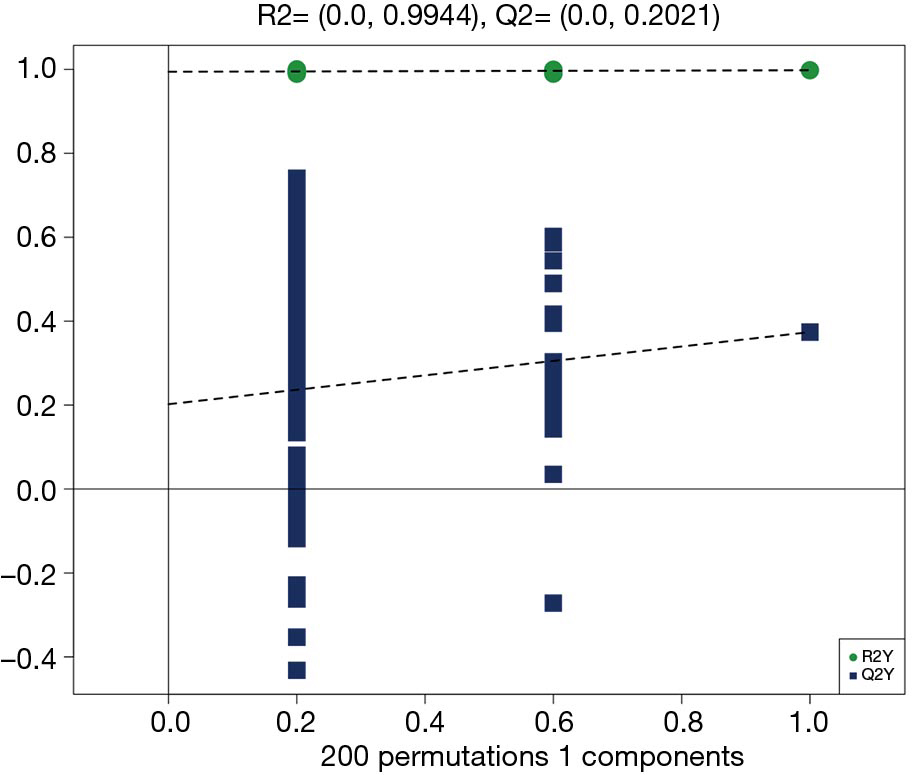 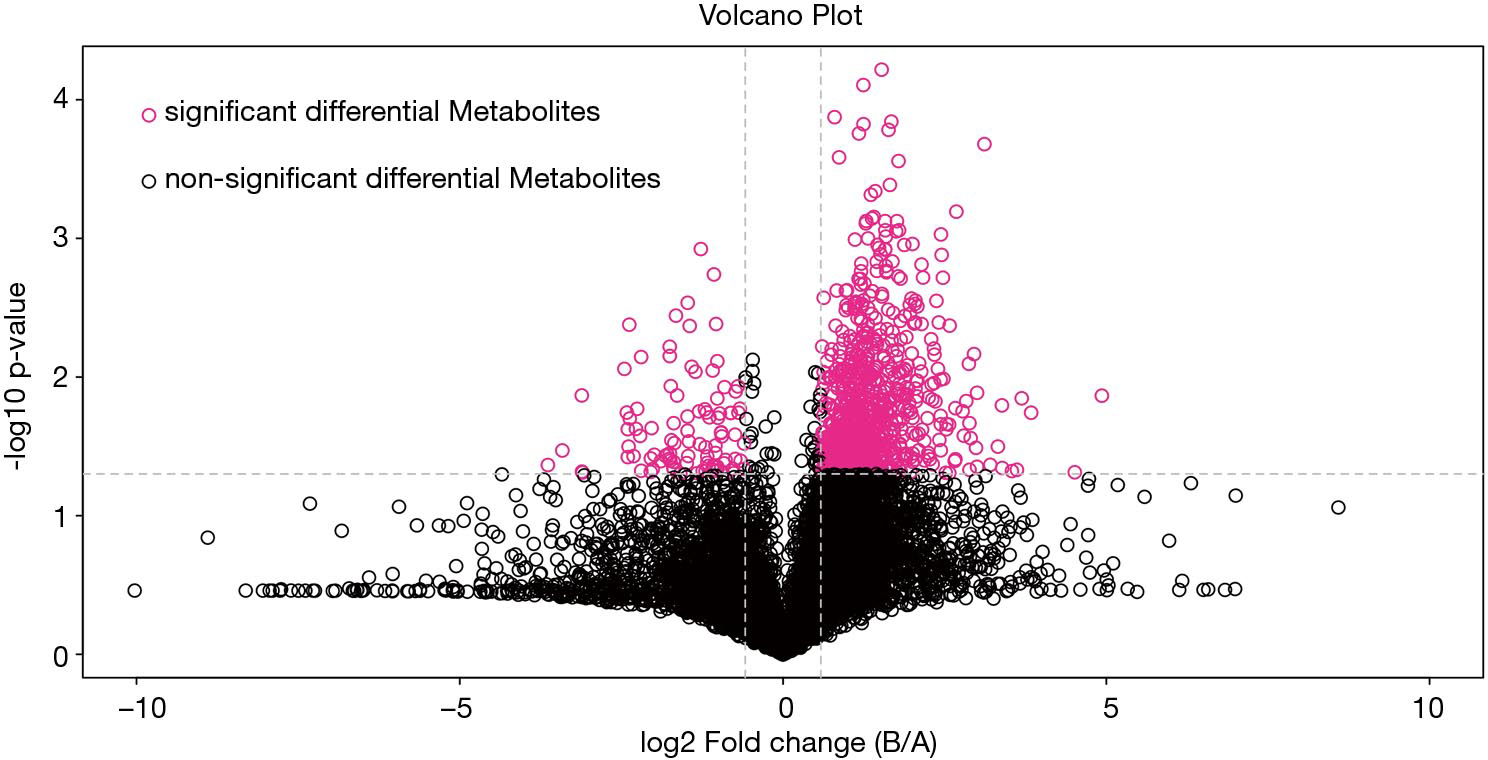 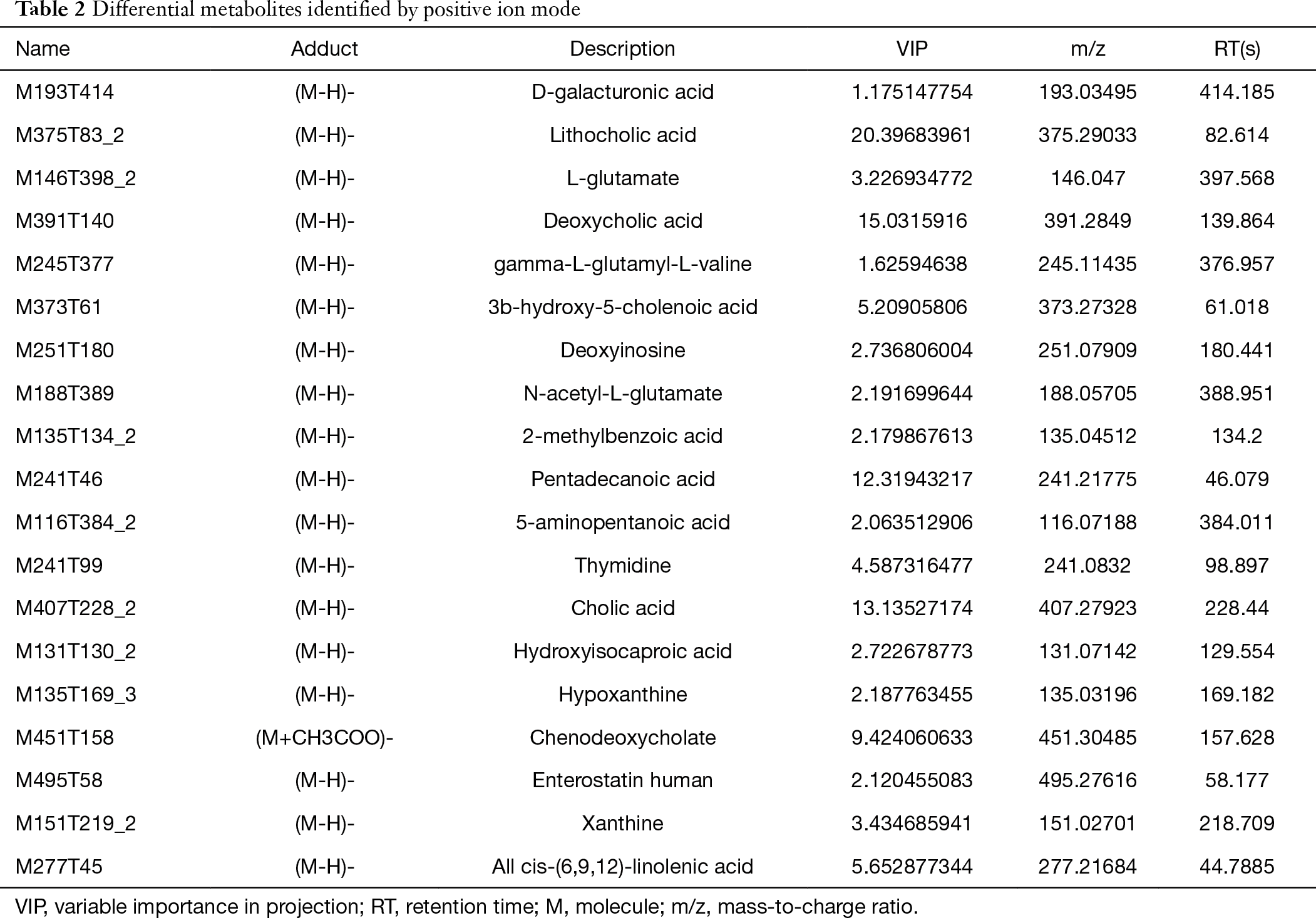 In this study, hierarchical clustering was carried out to determine the significant differential metabolites of groups in positive ion mode (Figure 8). Interestingly, we found that the seborrhea group and the healthy control group were clustered in the same cluster. Metabolites in the same cluster have similar expression patterns at close reaction steps during metabolic processes, indicating that the candidate metabolites selected in this study were reasonable and accurate. In addition, there was a significant regulatory relationship between the metabolites detected in a positive ion mode (Figure 9). 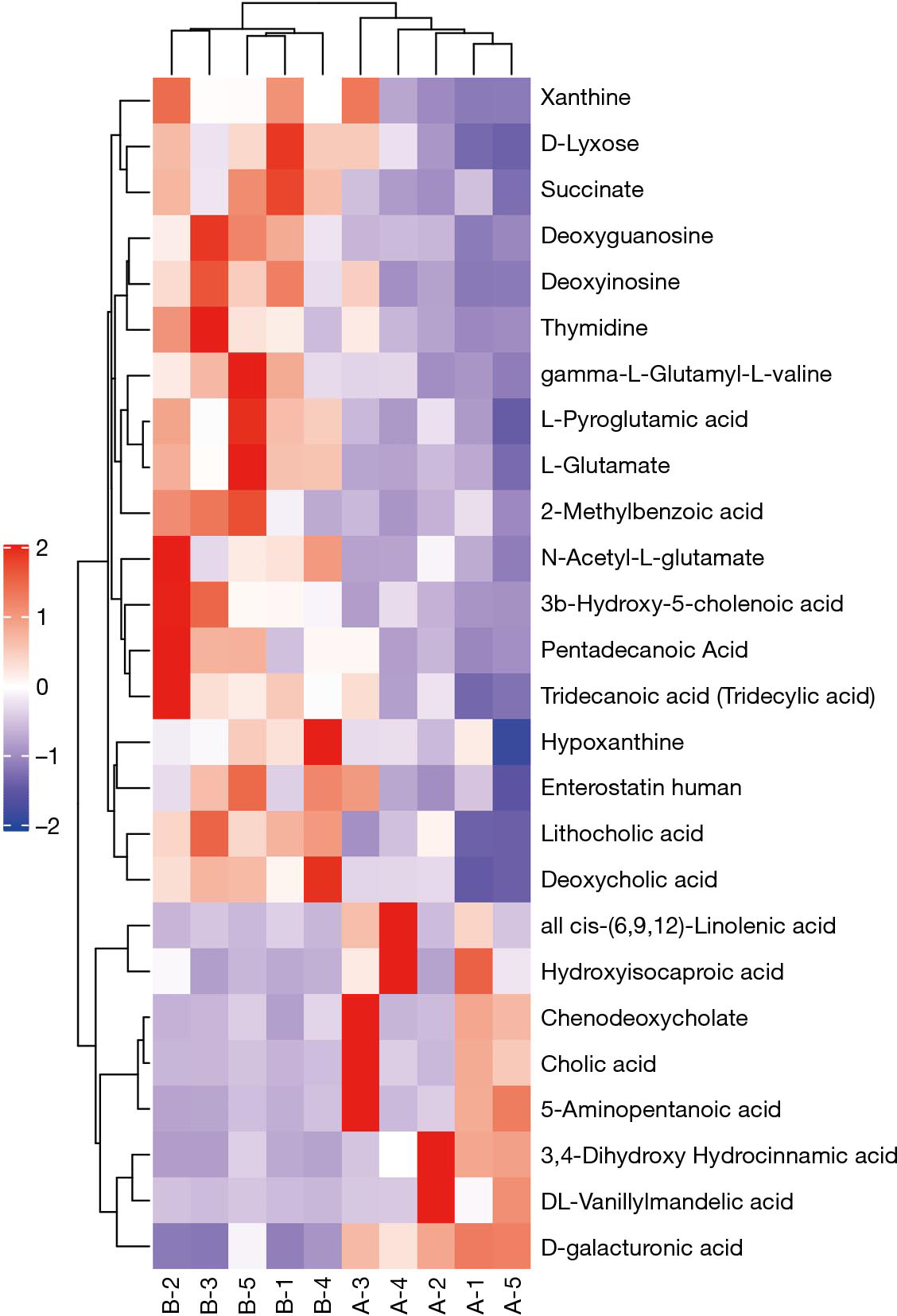 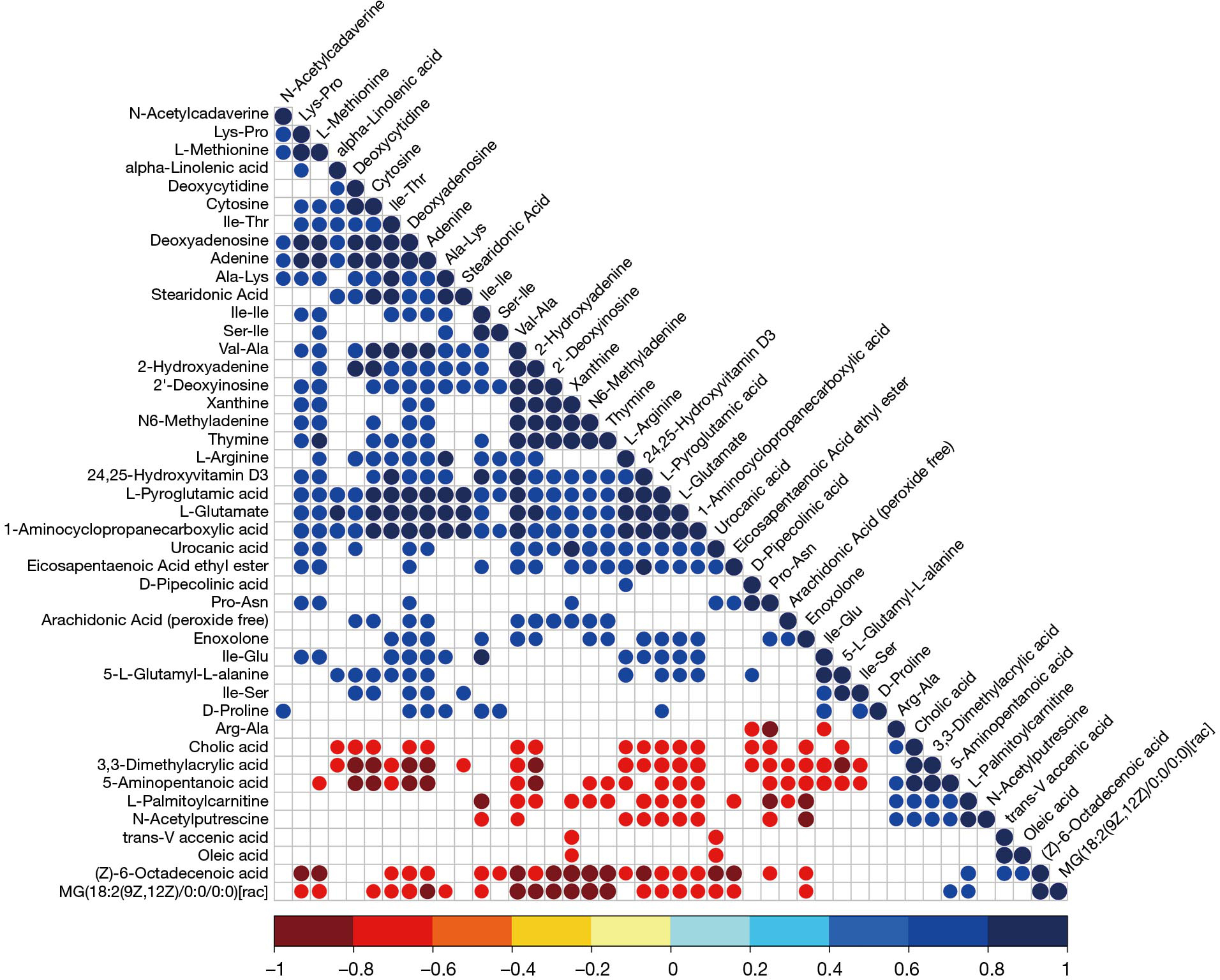 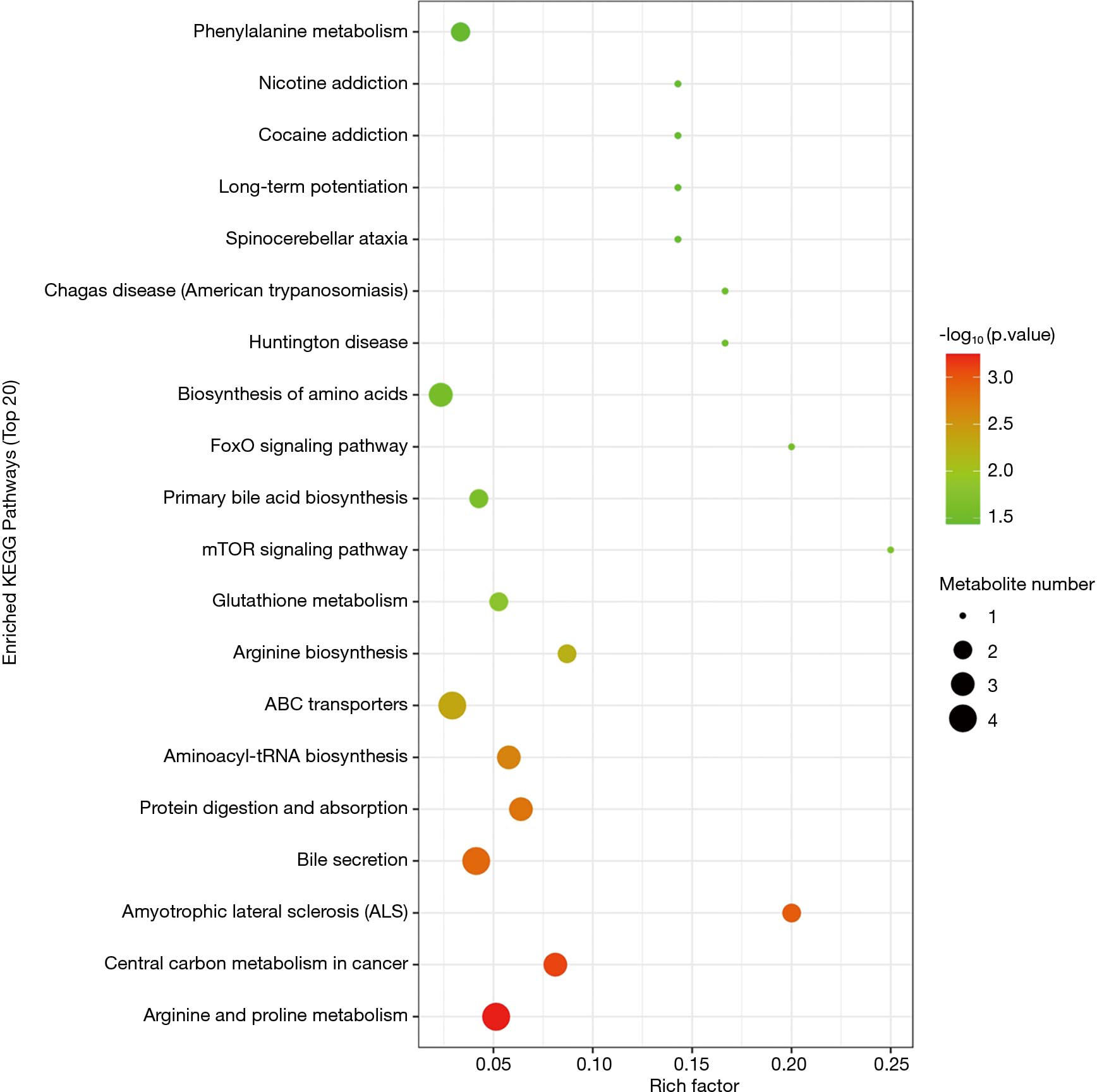 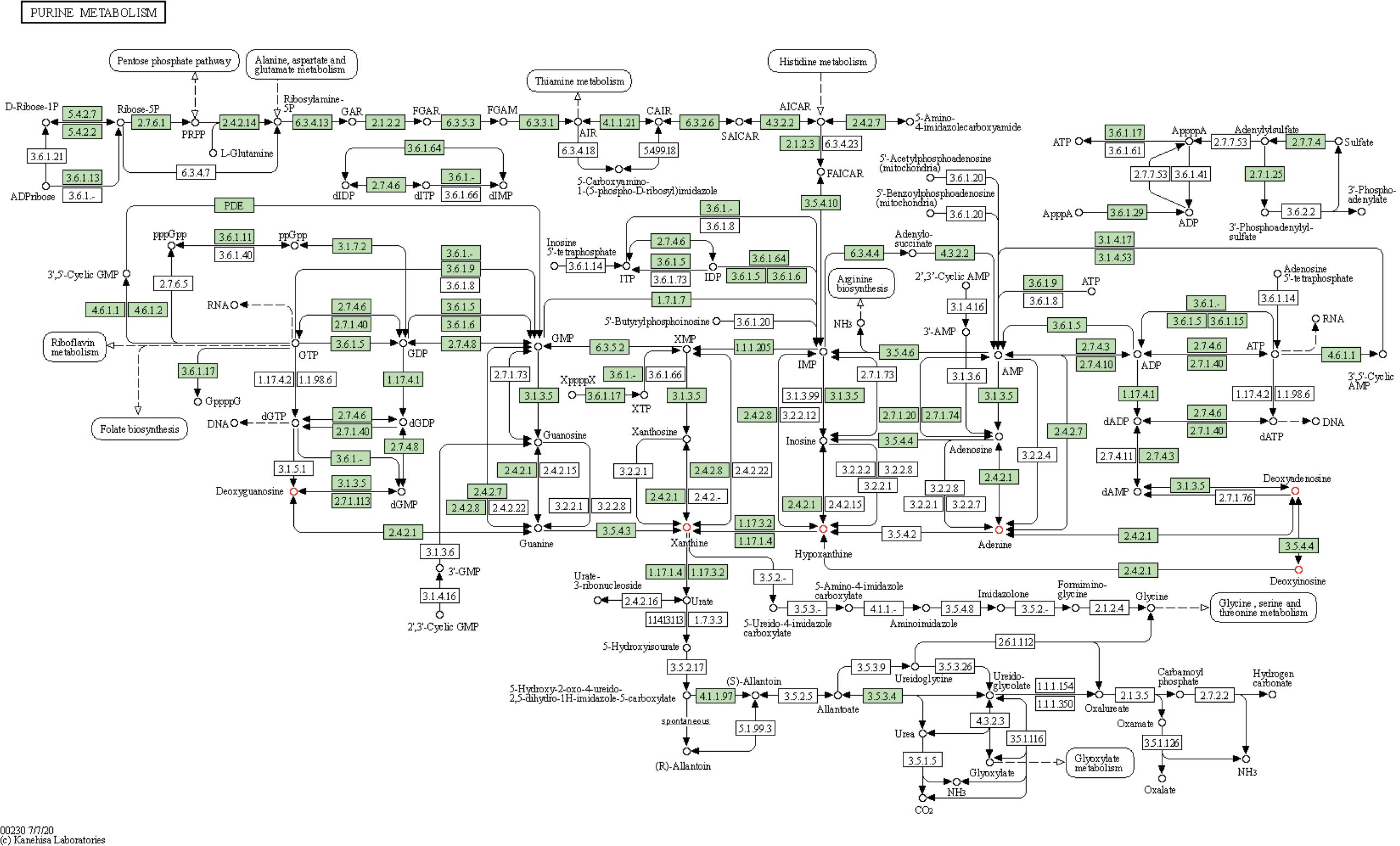 Figure 11 Map of the Kyoto Encyclopedia of Genes and Genomes (KEGG) pathway for purine metabolism. 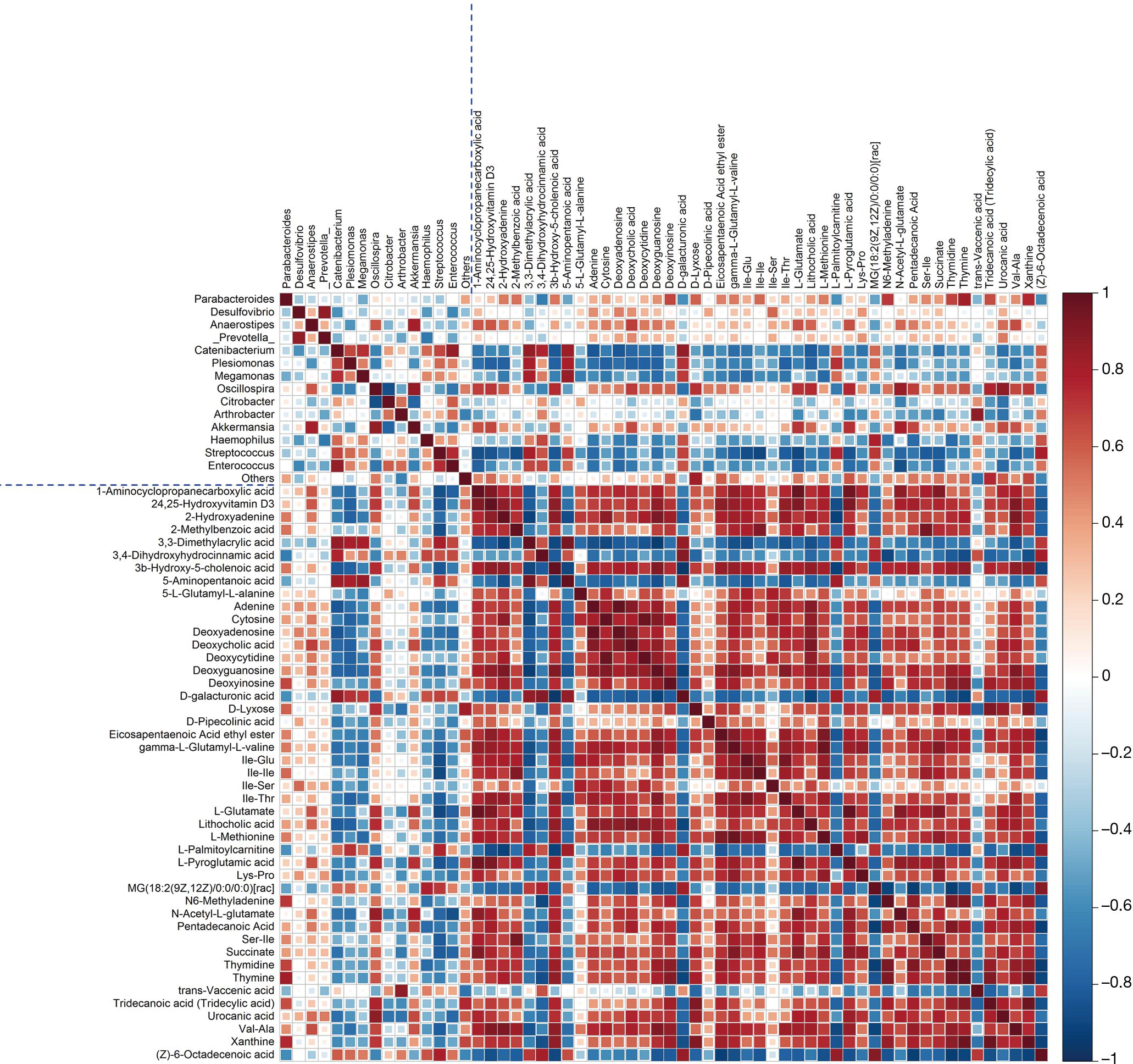 Figure 12 Heatmap of the correlation coefficient matrix for the differentially expressed metabolites in fecal samples from seborrheic patients and healthy individuals. 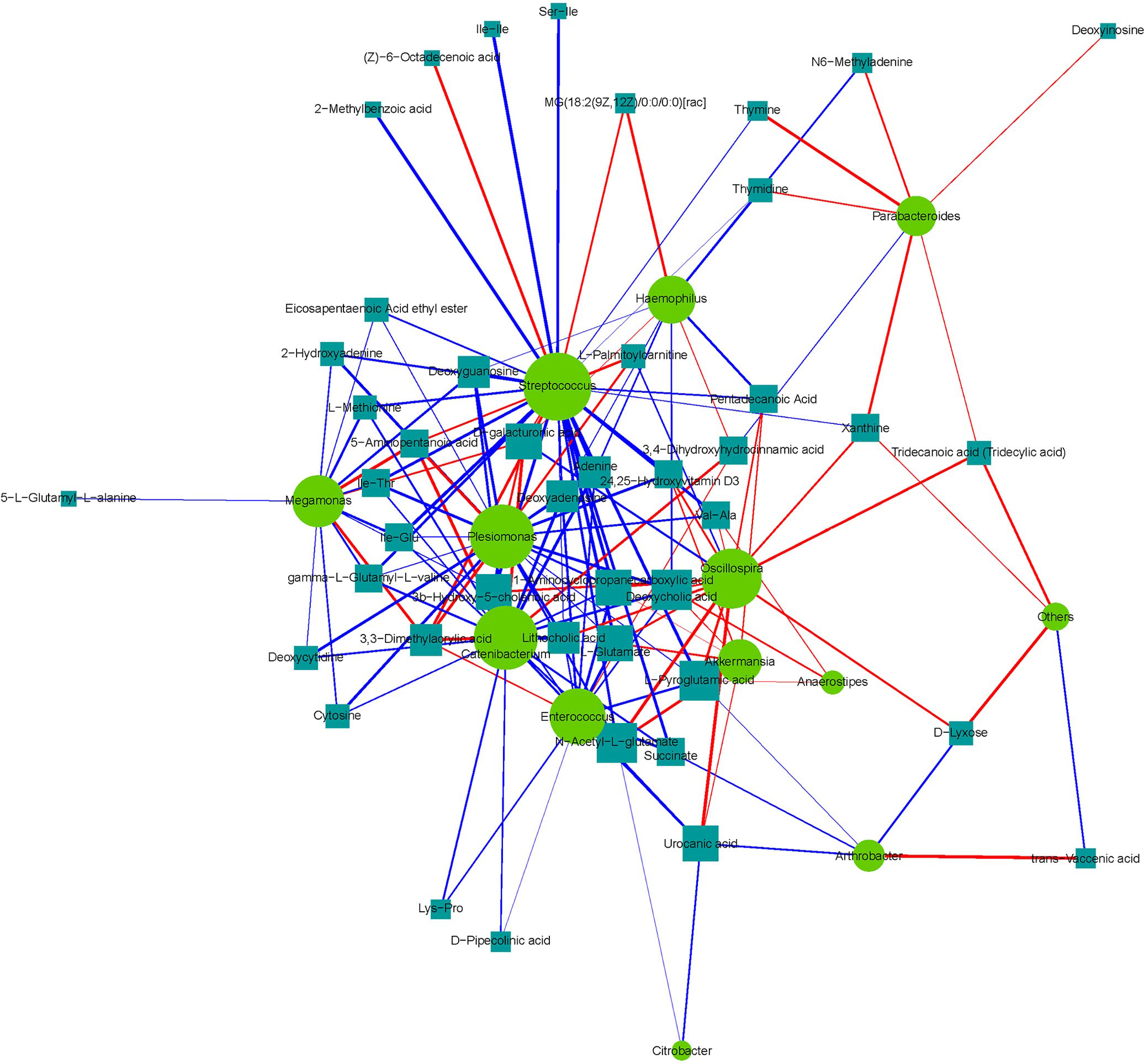 Four of the 11 signaling pathways were predicted to participate in regulating amino acid metabolism. Besides, the highest percentage of abnormal metabolites were also amino acid, suggesting a close link between seborrhea and amino acid metabolism. In vitro studies have shown that Toll receptor 2 and Toll receptor 4 in keratin-forming cells of the epidermis recognize Acinetobacter and initiate downstream natural immunity through inducing gene expression, and thus result in acne. Mechanically, changes in arginine and glycine impair the regulation of downstream immune signaling and gene expression, which ultimately mediates acne (11,12). Ruiz et al. found that a key link in insulin resistance caused by intestinal flora disorders is the activation of Toll receptors (TLRs) signaling pathway, which could explain the high prevalence of insulin resistance in patients with severe acne (13). It was suggested that acne patients have a high prevalence of psychological disorders of depression and anxiety (14), while another study has shown that abnormal amino acid metabolism is closely related to depression (15). According to our results, we proposed that intestinal flora disorders cause abnormal amino acid metabolism, which leads to depression. Because sebaceous gland cells have multiple receptors, including adrenocorticotropin-releasing hormone, androgens, and several neuropeptides, then it may be that the stress response acts through hormone levels and neurotransmitters, thus affecting the synthetic and secretory functions of sebaceous glands (16-18).

Abnormal purine and amino acid metabolism can cause various diseases, including gout, immune system disorders (such as immunodeficiency syndrome), blood disorders, kidney diseases, nervous system dysfunction, and depression (15,21). It has been shown that diet is an important factor in the development of seborrheic diseases. In our study, patients in the seborrhea group had a high-fat and high-cholesterol diet. Here, we proved that abnormal metabolism is closely related to the onset of seborrhea, and a high-fat and high-cholesterol diet-induced metabolic disorder may be associated with seborrhea diseases.

There are many diverse metabolites of the intestinal flora, and the present study only focused on some of them. In conclusion, our findings suggest that metabolites related to the gut microbiota may become biomarkers for exploring its roles in seborrhea. Our findings may contribute to the development of microbiota-based tools for the diagnosis, prevention, and treatment of seborrheic diseases.

Funding: This work was supported by the General Project of Dongguan Social Science and Technology Development (Project No. 2018507150461226)

Reporting Checklist: The authors have completed the MDAR reporting checklist. Available at http://dx.doi.org/10.21037/apm-21-331

Conflicts of Interest: All authors have completed the ICMJE uniform disclosure form (available at http://dx.doi.org/10.21037/apm-21-331). The authors have no conflicts of interest to declare.

Ethical Statement: The authors are accountable for all aspects of the work in ensuring that questions related to the accuracy or integrity of any part of the work are appropriately investigated and resolved. The study was conducted in accordance with the Declaration of Helsinki (as revised in 2013). The study was approved by medical ethics of Dongguan Tungwah Hospital and informed consent was taken from all individual participants.