Sepsis is a systemic and deleterious host response, which engenders severe sepsis and septic shock, with mortality of more than 25% (1,2). The progress of this disease could further deteriorate with the occurrence of subsequent acute organ dysfunction or combination with hypotension that is not reversed with fluid resuscitation (3,4). Among critically ill patients, sepsis is thought to be the most common cause of severe acute kidney injury (AKI) (5,6). Septic AKI, identified when both sepsis and AKI present, is a syndrome of acute function impairment and organ damage, accounting for ~50% AKI cases in the intensive care unit (ICU) (7,8). The hospital mortality is 47% and 1-year survival is only 77% for patients with stage 2–3 AKI that does not resolve within 7 days (8). Previous studies have confirmed that many complex factors were associated with the occurrence of AKI, including smoking history, diabetes, hypertension, abdominal infection, and so on (9). Although advances have been made in modern diagnostic methods, limitations in specificity and sensitivity impede advances in research and clinical applications.

Hypernatremia, defined as the concentration of sodium (Na+) >145 mmol/L, is one of the most common electrolyte disorders among patients who are critically ill (10,11). In clinical practice, hypernatremia is a frequent condition of life-threatening potential and found to occur in 9% of ICU patients (12,13). Hypernatremia can cause peripheral insulin resistance, hepatic gluconeogenesis impairment, neuropsychiatric impairment, cardiac contractility dysfunction, and so on (13). However, only a limited number of studies have focused on hypernatremia. Rather than just an alternative marker of disease severity, hypernatremia may be a prognostic risk factor for the development of AKI. Therefore, we evaluated the predictive and prognostic role of hypernatremia for AKI in patients with sepsis.

We present the following article in accordance with the STARD reporting checklist (available at http://dx.doi.org/10.21037/apm-21-792).

This study retrospectively reviewed 591 patients who were diagnosed with sepsis and admitted to the ICU of Beijing Friendship Hospital from January 2009 to December 2014. Patients who were hospitalized in the ICU for less than 24 h, pregnant, and suffering from diseases causing elevated serum Na+ such as primary aldosteronism and hypercortisolism were excluded. According to the concentration of serum Na+, the 591 patients were allocated to 3 groups: normal group, hyponatremia group, and hypernatremia group (Figure 1). All procedures performed in this study involving human participants were in accordance with the Declaration of Helsinki (as revised in 2013). The study was approved by ethics of Bioethics Committee of Beijing Friendship Hospital, Capital Medical University (No.: 2020-P2-065-01). Individual consent for this retrospective analysis was waived. 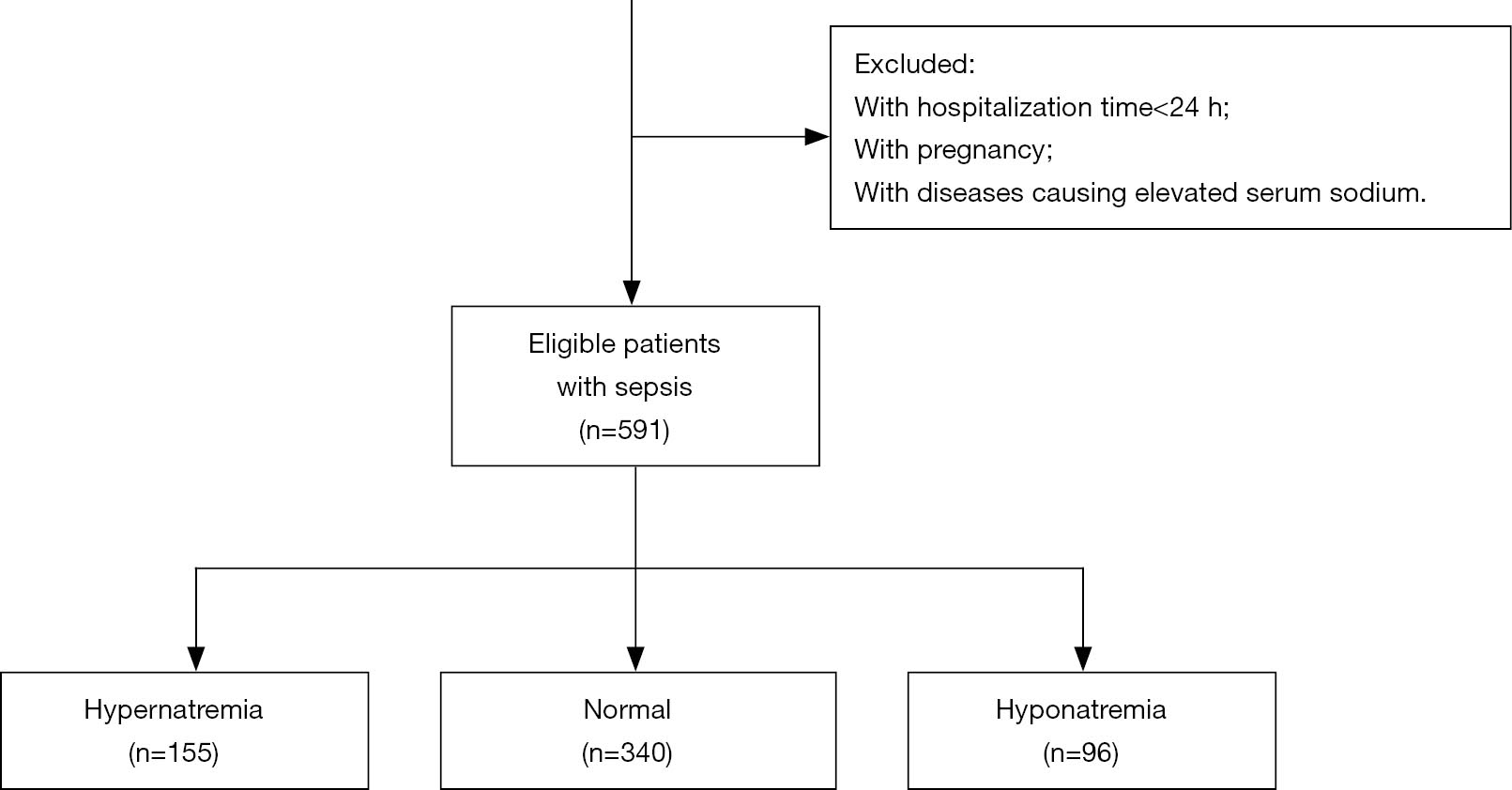 Figure 1 Flow chart of patients involved in this study

Organ dysfunctions including those of the respiratory system, circulatory system, liver, kidney, and coagulation system were also recorded.

The definition of sepsis was according to “Surviving Sepsis Campaign (2012)” as the presence of infection together with systemic manifestations (1).

The definition of AKI was referred to as the diagnostic criteria of Acute Kidney Injury Network (AKIN) and the Kidney Disease Improving Global Outcomes (KDGIO) (14,15).

Continuous variables were expressed as mean ± SD. Abnormally distributed data were expressed as median (interquartile range). Chi-square tests were used for comparison. Confounders and strong association variables were eliminated based on clinical experience. Univariate analysis was performed first, followed by multivariate analysis for hypernatremia, AKI, and death. Before multivariate analysis, the variables were co-linearly tested in a linear regression model, and variables without linear relationships were included in the multiple regression model. The receiver operating characteristic (ROC) curve was used in analyzing the predictive ability of Na+ for AKI and death. A P value <0.05 was regarded as a significant difference. 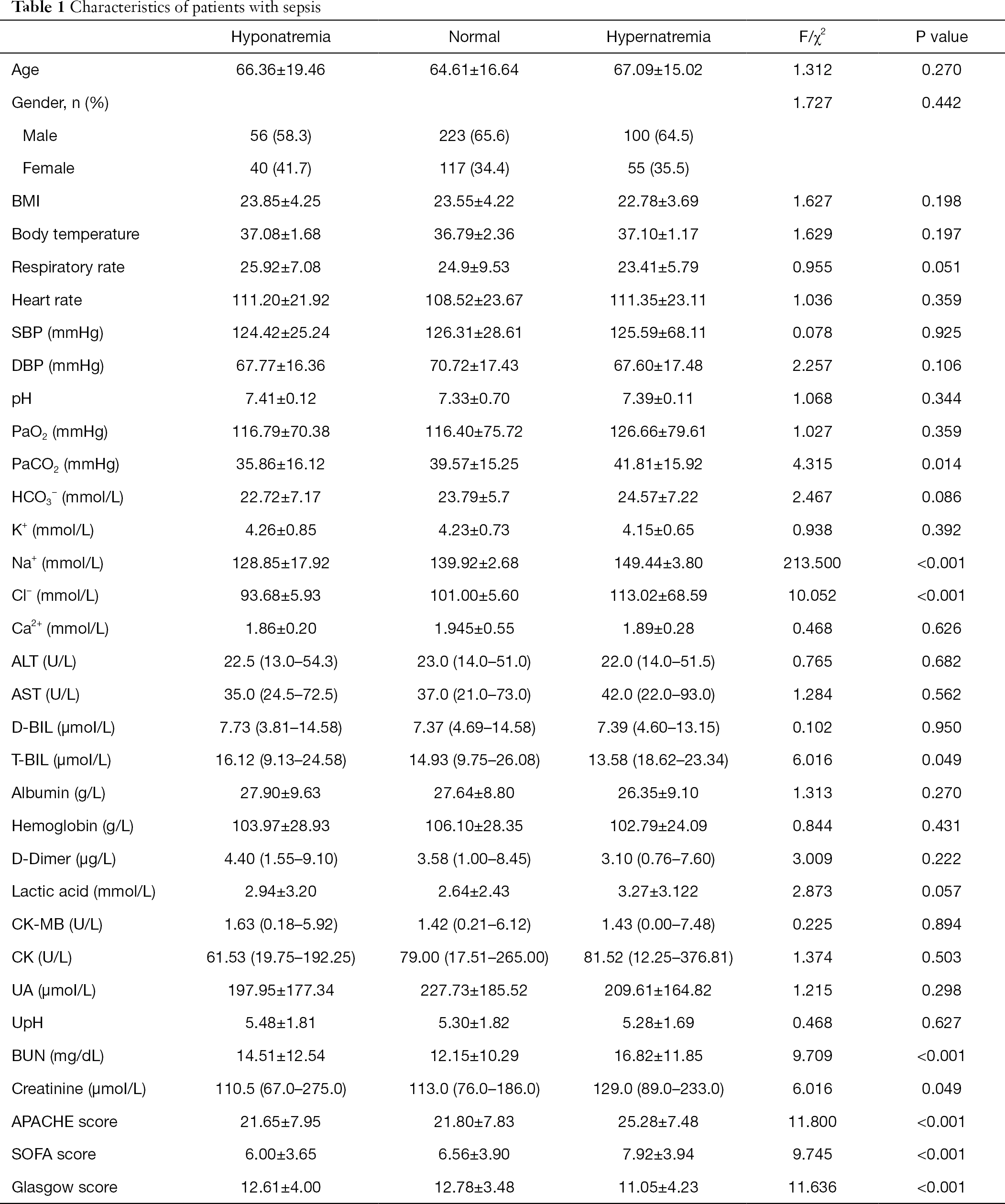 Then, the clinical features of patients with sepsis among 3 groups were further evaluated (Table 2). The AKI showed obvious differences (P=0.008), and patients with AKI had a much higher percentage of hypernatremia. Although the difference in death was not significant (P=0.078), the mortality of the hypernatremia group (38.1%) was a little higher than hyponatremia (31.3%) and normal group (27.9%). The severity of sepsis seemed not to be different among 3 groups with quite a similar incidence rate (P=0.164). As for infection site, urinary infection (P=0.016), and abdominal and pelvic infection (P=0.010) showed significant differences. Moreover, the number of organ dysfunction was different statistically (P=0.009), and the hypernatremia group (88.4%) tended to have multiple organ dysfunctions (2 or 3) in comparison with the hyponatremia (70.8%) and normal group (75.3%). Specifically, the difference in circulatory system dysfunction was statistically significant (P=0.048). By analysis of previous history, most diseases showed no difference except COPD (P=0.017) and cirrhosis (P=0.005).

From our results, the factors indicating kidney function such as BUN and creatinine were significantly different among the 3 groups, and were especially higher in the hypernatremia group. Besides, urinary infection further indicated a close relationship between AKI and sepsis. There are multiple factors involved in the occurrence of AKI, and the mechanism of increased mortality and morbidity risks associated with AKI remains to be elucidated. It was concluded by Bagshaw et al. that patients with septic AKI had an increased risk for death and a longer duration of hospitalization (16). Many researchers have regarded sepsis as a leading precipitant of AKI, while someone have reminded us not to ignore the likelihood of sepsis developing after AKI (6,16,17). Mehta et al. looked at the relationship between AKI and sepsis using a multicenter and observational study and found that sepsis frequently develops after AKI and predicts a poor prognosis, with high mortality rates and a relatively long duration of hospitalization (17). Recently, Gomez et al. reported the metabolic reprogramming and tolerance in coordinating adaptive strategies during sepsis-induced AKI (18). As addressed by Honore et al., the relationship is more complicated than a simple question of chicken and egg, and a well-informed clinical trial in the future is warranted (19).

The major cause of hypernatremia is water depletion, resulting from either reduced intake or excessive loss (12). Thus, hypernatremia is usually regarded as a hypovolemic electrolyte disorder. From the experience of clinical practice, urinary loss is the most common reason. Notably, this circumstance is more prominent during recovery after AKI, and hypervolemic hypernatremia has been studied in this process (12,20). Besides, it has also been highlighted that severe sepsis patients receiving 0.9% saline fluid resuscitation may acquire hypernatremia in an early process (21).

Corticosteroids are commonly used for treating sepsis (22,23). The results of previous studies showed a mild increase in Na+ level and increased the risk of hypernatremia with high-certainty evidence (22-25). It is suggested that the administration of corticosteroids is associated with reduced 28-day mortality compared with placebo use or standard supportive care (24). Another large randomized controlled trial (RCT), the Activated Protein C and Corticosteroids for Human Septic Shock (APROCCHSS) trial, showed that hydrocortisone plus fludrocortisone of low doses reduced 90-day mortality among patients with septic shock (26). However, the Adjunctive Corticosteroid Treatment in Critically Ill Patients with Septic Shock (ADRENAL) trial showed a significantly different result that the mortality was not decreased (27). Whether the subsequent hypernatremia, in turn, influences the effect of corticosteroids remains to be further studied. As suggested in a prospective study by Levy et al., the muscle Na+K+ ATPase activity may raise lactate concentrations in septic shock (28). We think that electrolyte disorder inside the body may account for the predictive ability of Na+ for AKI. Mendes et al. regarded predialysis hypernatremia as a prognostic marker in AKI in need of renal replacement therapy (29). Wu et al. reported serum Na+ as a reliable and validated predictor for mortality in enteric fistula patients complicated with sepsis (30). However, inconsistent with their conclusion, Na+ did not indicate a meaningful predictive ability for death in patients with sepsis combined with AKI. Metabolic disturbances, including hypernatremia, hypercapnia, and elevated lactates, caused by AKI in sepsis were also associated with encephalopathy (31).

A limitation of this study was the retrospective analysis of data from a single center. Multi-center studies should be conducted in the future to further comfirm the conclusions of this study. We mainly focused on the risk factors for AKI in patients with sepsis but have not compared the treatment yet. To complete an in-depth study, the evaluation of biomarkers will be involved in our future research.

Hypernatremia is independently associated with an increased risk and has a predictive ability of AKI in patients with sepsis.

Funding: This work was supported by the Beijing Municipal Administration of Hospitals Clinical Medicine Development of Special Funding (ZYLX201802).

Reporting Checklist: The authors have completed the STARD reporting checklist. Available at http://dx.doi.org/10.21037/apm-21-792

Conflicts of Interest: All authors have completed the ICMJE uniform disclosure form (available at http://dx.doi.org/10.21037/apm-21-792). The authors have no conflicts of interest to declare.

Ethical Statement: The authors are accountable for all aspects of the work in ensuring that questions related to the accuracy or integrity of any part of the work are appropriately investigated and resolved. All procedures performed in this study involving human participants were in accordance with the Declaration of Helsinki (as revised in 2013). The study was approved by ethics of Bioethics Committee of Beijing Friendship Hospital, Capital Medical University (No.: 2020-P2-065-01). Individual consent for this retrospective analysis was waived.