Solid organ transplantation (SOT) is the preferred treatment option for patients with end-stage organ disease. The number of SOT surgeries has been steadily rising in recent years, and there has been a marked increase in the median survival rates of recipients and grafts (1,2). However, the increasing incidence of multidrug-resistant organism (MDRO) infections has posed a major challenge to SOT. For SOT recipients, high-dose immunosuppressants and broad-spectrum antibiotics can markedly increase the risk of early postoperative MDRO infections and thus exert adverse effects on the outcomes of SOT.

Perioperative and postoperative infections in SOT recipients are mainly nosocomially acquired and are mostly caused by Gram-negative bacilli (3). In 2019, the Chinese Antimicrobial Resistance Surveillance System (CARSS) reported the total number of bacterial strains to be 3,528,471, of which Gram-positive bacteria accounted for 29.6% and Gram-negative bacteria 70.4%. The strains were mainly cultured from sputum (1,462,853 strains, 41.5%), urine (673,824 strains, 19.1%) and blood (32,002 strains, 9.1%). The top 5 Gram-positive bacteria isolated were Staphylococcus aureus, Streptococcus pneumoniae, Enterococcus Faecium, Staphylococcus epidermidis, and Enterococcus faecalis, and the top 5 Gram-negative bacteria isolated were Escherichia coli, Klebsiella pneumoniae, Pseudomonas aeruginosa, Acinetobacter baumannii, and Haemophilus influenzae. Due to the differences in environment, climate, ecology, and population, the sites of early postoperative MDRO infections and the distribution of pathogenic bacteria after SOT vary somewhat across different regions (4).

Here, we present an analysis of the incidence and clinical features (including pathogens, infection sites, postoperative complications, and prognosis) of early MDRO infections after SOT, in an attempt to provide new evidence for the control and treatment of early MDRO infections. We present the following article in accordance with the STROBE reporting checklist (available at http://dx.doi.org/10.21037/apm-21-777).

The inclusion criteria for participants were the following: (I) aged 18 years or above; (II) receiving organ transplantation for the first time; (III) without any infection or bacterial colonization before surgery; (IV) with complete medical records; and (V) survival with 24 hours of surgery.

The exclusion criteria for participants were the following: (I) long-term immunosuppressive therapy prior to surgery; and (II) transfer to other hospitals during treatment and/or lost to follow-up during the study period.

The clinical diagnoses of MDRO infections were based on the Diagnostic Criteria for Hospital Infections, as released by the Ministry of Health of the People’s Republic of China in 2001. More specifically, the diagnostic criteria included the same bacterial strain being identified on more than 2 consecutive occasions or at more than 2 sites, and resistance to any combination of 3 or more of the 3 drug classes (carbapenems, cephalosporins, β-lactam and β-lactamase inhibitor combinations, fluoroquinolones, and aminoglycosides), then multidrug-resistant bacterial infection after Simultaneous pancreatic and kidney transplantation is diagnosed.

The clinical features including pathogens, infection sites, complications, and outcomes of MDRO infections in the early stage after different organ transplantation are shown in Table 2. 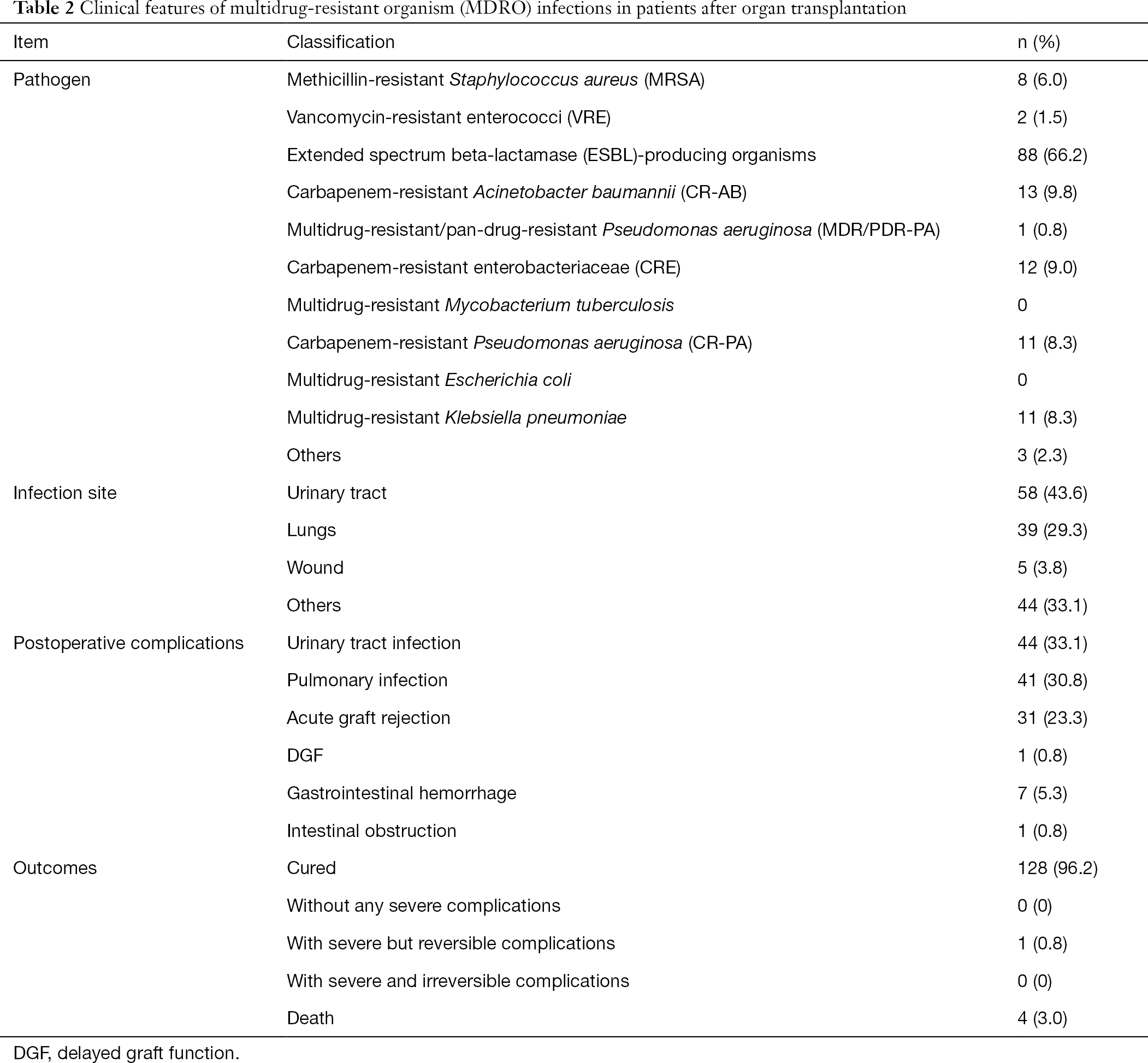 Infections occurring early after SOT are usually surgery related, with pathogens mostly originating from the in-hospital environment or carried by the donor and/or recipient. The risk of MDRO infection is particularly high in organ donors or recipients after prolonged ICU stay, where they typically receive a series of interventions (including invasive procedures). SOT recipients are often required to take long-term immunosuppressive drugs, which leads to secondary immune dysfunction, resulting in a significantly increased incidence of postoperative infections. The combinations of multiple antibiotics can promote the development of multidrug-resistant bacteria while reducing the patient's risk of infection. Advanced age, higher BMI (6), underlying disease, prolonged preoperative hospitalization, and prolonged indwelling catheterization also increase the incidence of MDRO infections. In addition, surgery-related risk factors for MDRO infections include contamination of preservation fluid, prolonged surgery, high intraoperative bleeding, retention of a foreign object, poor graft perfusion, anastomotic or intestinal fistula, inappropriate antibiotic surgical prophylaxis, and environmental factors in the operating room (3).

The perioperative and early postoperative infections in SOT recipients in China are mostly nosocomially acquired MDR Gram-negative bacilli. In addition to Escherichia coli, a member of the family Enterobacteriaceae, the most common pathogens include Acinetobacter baumannii, Pseudomonas aeruginosa, and Stenotrophomonas maltophilia. The isolation rates of Gram-positive cocci are rising annually, with the most common pathogens including Staphylococcus aureus, enterococci, and coagulase-negative staphylococci. Meanwhile, the rate of methicillin resistance has also shown an upward trend (19). Among the 166 patients infected with MDROs early after SOT in our current study, the pathogens were mostly Gram-negative bacteria, accounting for 87% of all specimens, of which extended spectrum beta-lactamase (ESBL)-producing organisms ranked first, accounting for 66.2%, followed by Acinetobacter baumannii (9.8%), Pseudomonas aeruginosa (9.3%), and Klebsiella pneumoniae (8.3%). In contrast, those infected with Gram-positive drug-resistant bacteria accounted for only 10% among which S. aureus was dominant. Drug sensitivity tests showed that carbapenem-resistant (27.1%), methicillin-resistant (6%), and vancomycin-resistant (1.5%) strains were predominant, in addition to MDR bacteria (9.2%) and ultra-broad-spectrum β-lactam-positive drug-resistant bacteria (66.2%). Among them, the 11iP. aeruginosa strains isolated included 1 pan-drug-resistant P. aeruginosa (PDR-PA) strain and 10 carbapenem-resistant P. aeruginosa strains, while 13 Acinetobacter baumannii strains and 12 Bacillariophyceae strains were resistant to carbapenems. Carbapenems have been considered to be the last line of defense against drug-resistant Gram-negative pathogen infections in the past decade. However, the rapid increase in the detection rates of carbapenem-resistant strains, especially Klebsiella pneumoniae, Pseudomonas aeruginosa, and Acinetobacter baumannii and the gradual evolution of Gram-negative bacteria towards MDR have promoted the more cautious selection of antimicrobials (3).

Among the 133 patients with MDRO infections after SOT, urinary tract infections were the most common (43.6%), followed by pulmonary infections (29.3%), wound infections (3.8%) and other infections (33.1%). These infections did not occur definitively at a single site; rather, they could occur at multiple sites simultaneously. Poorly controlled infections could rapidly progress into BSIs, leading to a series of systemic symptoms and even death. In addition to simple infections, there were also other postoperative complications such as acute graft rejection (23.3%), gastrointestinal bleeding (5.3%), delayed graft function (DGF) (0.8%), and intestinal obstruction (0.8%). Of these patients, 128 (96.2%) were cured, 1 (0.8%) had a serious complication that could be cured, and 4 (3%) died.

Urinary tract infection, a common postoperative infection, may be associated with the use of indwelling urinary catheters. The most frequent type of infection in patients undergoing renal transplantation is urinary tract infection, which is typically caused by Klebsiella pneumoniae and ESBL-producing organisms (20). Simple urinary tract infections have no significant impact on the long-term survival of kidney transplant recipients if managed promptly (21,22). However, poor control of the infection may lead to DGF and even graft damage. Once a systemic infection develops, the risk of death can be high. Most pulmonary infections occurring within 3 months of surgery are hospital-acquired and may be associated with the assisted ventilation in critically ill patients, hypostatic pneumonia due to prolonged immobility, and colonization of drug-resistant bacteria in ICU. The common pathogens include Gram-negative bacilli such as Klebsiella pneumoniae, Escherichia coli, and Pseudomonas aeruginosa; however, Gram-positive pathogens such as Staphylococcus aureus, Streptococcus pneumoniae, and anaerobic bacteria can also be isolated. In a report by Tanaka et al., 92% of liver transplantation recipients developed bacterial respiratory infections, including at least one episode of pneumonia in 19% of recipients. Pneumonia after liver transplantation often has a poor prognosis. The incisional infections after renal transplantation are mostly caused by intraincisional hematoma, urinary leakage, or lymph node cysts, with an incidence of 2–47%. The susceptibility factors include the recipient's own physical status, the bacteria and/or fungi carried by the donor, prolonged surgery, delayed postoperative incisional recovery, acute graft rejection, and use of immunosuppressives (23). Once an incisional infection occurs, early diagnosis, effective drainage, and rational use of various drugs (including antibiotics) is important. Adequate low drainage may be performed if necessary.

Acute rejection is common within the first year after a transplant (24). Current research suggests that acute rejection is mainly related to insufficient doses of immunosuppressants, autoimmune diseases in recipients, young age of the recipient, HLA-DR mismatch, long cold ischemia time, and old age of the donor. Once an acute rejection occurs, it can be treated with high-dose pulse intravenous steroids. Gastrointestinal bleeding may be related to surgical stress and the use of high-dose glucocorticoids, while intestinal obstruction is considered a complication of general anesthesia.

With the development of technology, immunosuppressive agents can greatly improve the survival rate of grafts and reduce rejection reactions. However, due to the side effects of immunosuppressants, the incidence of various infections in patients after surgery is very high, especially the infection of multi-drug resistant bacteria. Sometimes due to the lack of effective antibiotics, it can be severely life-threatening. So Infection-related symptoms and laboratory indicators, and the blood concentration of immunosuppressants should be closely monitored. When serious life-threatening infections occur, the Immunosuppressants should be reduced or stopped.

The results of our current study highlighted the challenges of MDRO infections after SOT. However, our study was limited by its single-center design and failed to follow up patients for longer-term complications and their treatment patterns, which need to be further explored in future clinical studies with larger sample sizes and longer observation periods. As the pathogens and sites of infection of postoperative MDRO infections vary in different time and regions, regular analysis of the clinical features of postoperative MDRO infections in SOT recipients will be valuable for healthcare professionals and their patients.

Reporting Checklist: The authors have completed the STROBE reporting checklist. Available at http://dx.doi.org/10.21037/apm-21-777

Conflicts of Interest: All authors have completed the ICMJE uniform disclosure form (available at http://dx.doi.org/10.21037/apm-21-777). The authors have no conflicts of interest to declare.

Ethical Statement: The authors are accountable for all aspects of the work in ensuring that questions related to the accuracy or integrity of any part of the work are appropriately investigated and resolved. This study was conformed to the provisions of the Declaration of Helsinki and was approved by the Clinical Research and Application Ethics Committee of the Second Affiliated Hospital of Guangzhou Medical University (No. 2018-QCC-ks-01). Written informed consent was obtained from the patient.