A seroepidemiological investigation of Lyme disease in Qiongzhong County, Hainan Province in 2019–2020

Lyme disease (LD) is a vector-transmitted disease resulting from Borrelia Burgdorferi (BB) bacterial infection (1). In the early stage of infection, LD manifests as skin migratory erythema, flu-like symptoms, arthralgia, muscle pain, chest pain, and other symptoms, and can later progress to facial neuritis, meningitis, facial nerve palsy, limb numbness, and other symptoms of nervous system damage (2). LD is known as the second form of AIDS in the United States. LM has been reported in more than 70 countries in Asia, Europe, America, Oceania, and Africa, and its incidence area and prevalence are expanding and rising, respectively. Thus, LM constitutes a worldwide public health issue (3,4).

BB has been detected in patients, animals, and/or ticks in 30 autonomous regions and municipalities of China, confirming that the country is a natural foci of LD (5). As an endemic infectious disease, LD has also shown a trend of regional clustering in China, mainly in the Northwest, Inner Mongolia, and Xinjiang (6,7). There are some reports in the literature of LD cases in southern regions of China; however, these reports are few compared to those in northern areas. A seroepidemiological survey conducted by Li et al. confirmed the presence of LD in the northeastern part of Hainan, an island province located in the South China Sea; however, no etiological study has confirmed that this area is a natural foci of LD (8). Through gene sequencing analysis, our research team found that Boophilus ticks in the Qiongzhong area carry multiple genotypes of BB and that the carrying rate is high, meaning there is a risk of LD transmission (9). Qiongzhong County is located in central Hainan, and its environment differs geographically and climatically from those of mainland provinces. Therefore, the present study aimed to investigate the prevalence of LD in Qiongzhong County and determine the infection level of LD in the local population, so as to provide a basis for further local LD surveillance as well as effective prevention and treatment measures. We present the following article in accordance with the MDAR reporting checklist (available at http://dx.doi.org/10.21037/apm-21-693).

From 2019 to 2020, 252 serum samples were collected from suspected LD cases in Qiongzhong County, including 159 cases with joint symptoms and 93 cases with neurological symptoms. Cases with rheumatoid arthritis or other diseases were excluded. The 148 males and 104 females included in the study ranged in age from 5 to 92 years old.

All procedures performed in this study involving human participants were in accordance with the Declaration of Helsinki (as revised in 2013). The study was approved by Qiongzhong Li and Miao Autonomous County People’s Hospital (No.:20190541). Individual consent for this retrospective analysis was waived.

According to the recommendations of the Centers for Disease Control and Prevention (CDC) in the United States, a 2-step method was employed to detect antibodies to LD in patients’ serum: step 1 was a primary screening test by indirect immunofluorescence assay (IFA), and step 2 was a confirmatory test by WB.

The serum was diluted with 3% egg yolk to a ratio of 1:16. A positive result was taken as more than 50% of the spirochetes being stained with bright fluorescence under the 40×10 field of the fluorescence microscope, with an antibody titer of IgM ≥1:64 and IgG ≥1:128. Positive and negative controls were made at the same time.

Specimens that tested positive in the initial screening by IFA were subjected to confirmatory testing by WB. Serum was diluted with phosphate-buffered saline with Tween at a ratio of 1:25. The antigen strips were soaked in serum, shaken for 4 hours, and washed 3 to 5 times for 5 to 10 minutes each time. Then, the antigen strips were added to the secondary IgG or IgM antibody overnight. After elution (5 times, for 5 to 10 minutes each time), color reagent was added for 30 minutes for color development, after which, the reaction was terminated with pure water. The results of WB were determined according to the Chinese WB diagnostic criteria for LD (10).

All statistical calculations were performed with SPSS 20.0 software. Data were analyzed using the chi-square (χ2) test, and the results are expressed as percentages. P<0.05 was considered as statistically significant.

A total of 252 serum samples were tested by the IFA method. Of the 39 samples found to be positive for LD antibodies, 8 were IgG positive and 31 were IgM positive. Therefore, the positive rate of LD antibody detection by IFA was 15.48% (Table 1). As shown in Figure 1, compared with the negative control, the spirochete morphology was clearly visible when positive serum was diluted at a ratio of 1:64. For serum specimens that had a positive IFA result, WB was performed for confirmatory testing. As shown in the results in Table 2, 28 copies were positive for LD antibodies, translating to a positive rate of 11.11%. Among the 28 positive specimens were 12 cases with neurological symptoms and 16 cases with joint symptoms. 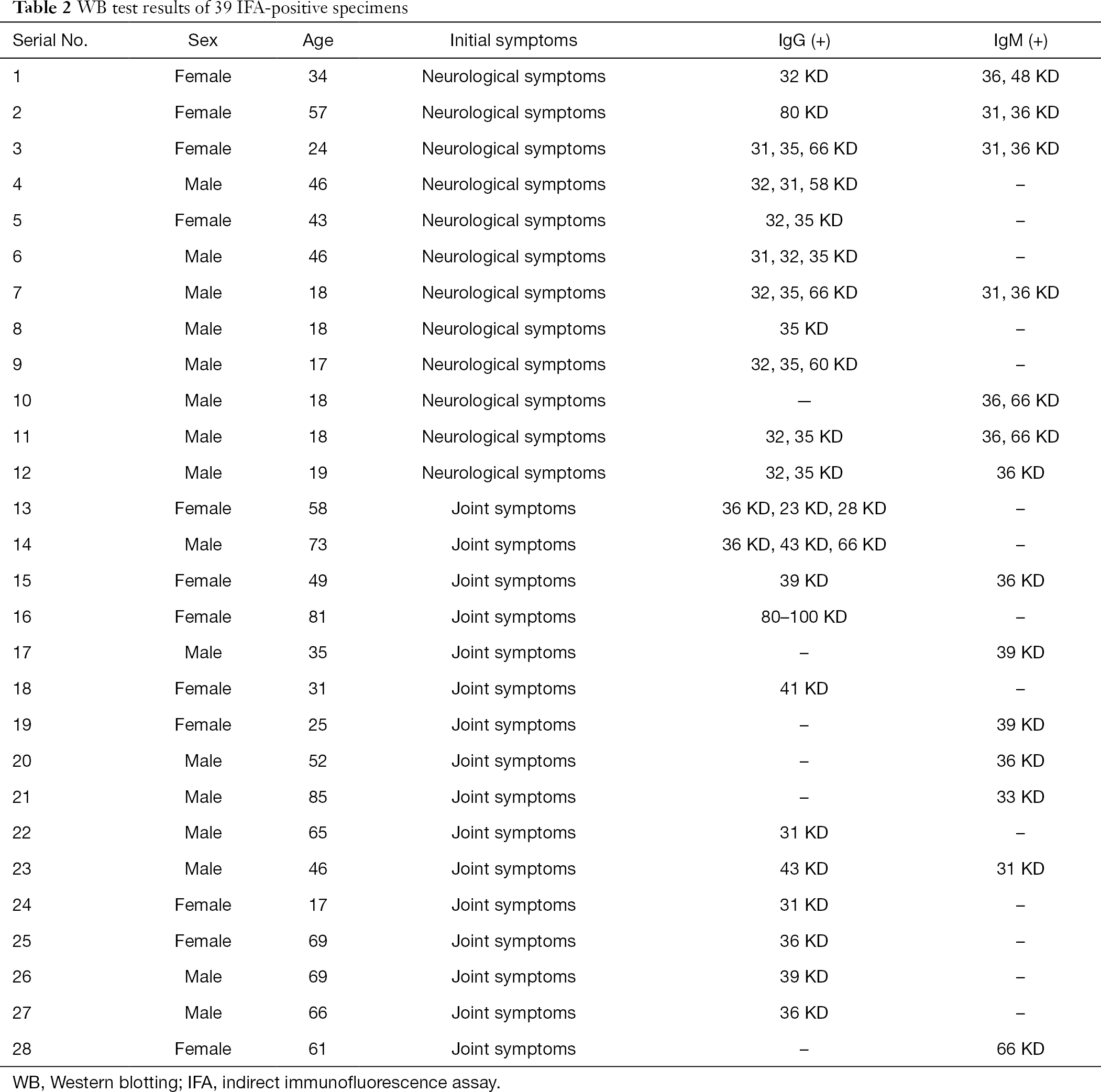 LD is a typical natural foci disease, which can circulate in nature without any reliance on humans. Any area with a suitable ecological environment and biological community may form a natural foci of LD. The prevalence of LD is restricted by the natural geographic landscape and human factors. The more opportunities for host animals and vector ticks to come into contact humans, the more likely infections are to occur (11). However, in China, LD is not a legally reported infectious disease, so the disease is not well known, and the infection status among the populations of different areas is unclear.

Scholars from various countries believe that the main biological vectors of LD spirochetes differ between animals and humans. Zhang et al. discovered that Boophilus ticks in the Qiongzhong area carried multiple genotypes of BB and that the carrying rate was high, thus confirming the risk of LD transmission (9). Hainan is an island province located off the southernmost tip of mainland China. The natural geographical conditions in Hainan are extremely different from other areas of China with a high incidence of LD. In their study, Li et al. (12) conducted LD antibody screening of serum from patients with joint and neurological symptoms in Sanya City, Hainan, and confirmed the presence of LD in the province. Currently, the treatment of Lyme disease mainly includes antibiotics, non-steroidal anti-inflammatory drugs, and glucocorticoids. Antibiotics, such as tetracycline, amoxicillin, penicillin, and doxycycline, are effective against various lesions of LD. Nonsteroidal anti-inflammatory drugs (NSAIDs) are used to treat arthritis in Lyme disease, such as Fenbid. Glucocorticoids are indicated for patients with Lyme disease meningitis or carditis, such as secreisone.

The results of the present study showed that among 252 serum samples, the positive rate of antibody detection using the IFA method was 15.48%, while the positive rate using the WB method was 11.11%. The difference in positive rate between the two methods may be attributed to the cross-reaction between IFA antibody and Leptospira, Treponema pallidum and other Treponema antibodies, resulting in false positive results. In 2010, the Biesiada (13) study showed that to improve the specificity and diagnostic accuracy in the detection of LD, a 2-step method is required, comprising initial screening by enzyme-linked immunosorbent assay or IFA, followed by WB for diagnostic confirmation of preliminarily positive results.

In the present study, the results of sex and age-based analyses showed that LD spirochetes were detected in both males and females, and in all age groups. The positive rate was the highest among cases aged ≤20 and ≥81 years old (both 22.22%), and the antibody detection rate was higher among men than among women (16.89% vs. 13.46%), although the difference was not statistically significant. The LD serological survey conducted in the Miyun District of Beijing by Yang et al. showed that the total positive rate of antibodies in women was higher than that in men, and that the 50 years old age group had the highest overall positive antibody detection rate (14). The findings of Li et al. were consistent with the results of the present study; they found that there was no statistically significant difference in the LD positive antibody rate among patients of different sexes and ages in 3 hospitals in the northeastern part of Hainan province (8). In this study, LD antibodies were detected in serum of cases of suspected LD in Qiongzhong County, Hainan, which indicates that LD is present in the local population. The positive rate of total antibodies to LD in cases with neurological symptoms using the IFA method was 20.43%, which was higher than the positive rate of 12.58% observed in cases with joint symptoms. The overall positive rate of antibodies to LD in cases with joint symptoms using the 2-step (IFA and WB) method was 10.06%, which was slightly lower than the positive rate in cases with neurological symptoms (12.90%).

LD is a syndrome associated with multiple system damage. In addition to chronic skin migrating erythema, heart damage, and joint symptoms, patients can also experience complex neurological symptoms (15). Nervous system damage is among the most serious clinical manifestations of LD. BB is highly neurotropic; not only can it cause neurological symptoms, but it can also incubate in the central nervous system over the long term, showing different neural spirochetes at different stages. The disease seriously affects patients’ quality of life. This study has evidenced the existence of LD in patients with joint and neurological symptoms in Qiongzhong County, Hainan, which should prompt local clinicians to consider the possibility of LD in patients presenting with such symptoms.

This study found evidence that LD is present in Qiongzhong County, Hainan. However, the number of samples in this study was limited, meaning our results cannot accurately reflect the prevalence of LD in the local population. Nevertheless, our study provides a theoretical basis for the prevention and control of LD in Qiongzhong County. Local medical staff should pay attention to the differential diagnosis of LD in patients with neurological and joint symptoms, so as to ensure early detection, diagnosis, and treatment to control the occurrence of LD-related complications. At the same time, attention should be paid to the dissemination of LD knowledge among forest workers, forest guards, farmers, and young people, to increase the awareness of the local population. Through such measures, we can reduce tick exposure and the chances of sustaining a tick bite, and prevent and control the occurrence of LD.

Funding: This research was supported by the Hainan Province Health and Family Planning Industry Research Project (No. 19A200039).

Reporting Checklist: The authors have completed the MDAR reporting checklist. Available at http://dx.doi.org/10.21037/apm-21-693

Conflicts of Interest: All authors have completed the ICMJE uniform disclosure form (available at http://dx.doi.org/10.21037/apm-21-693). The authors have no conflicts of interest to declare.

Ethical Statement: The authors are accountable for all aspects of the work in ensuring that questions related to the accuracy or integrity of any part of the work are appropriately investigated and resolved. All procedures performed in this study involving human participants were in accordance with the Declaration of Helsinki (as revised in 2013). The study was approved by Qiongzhong Li and Miao Autonomous County People’s Hospital (No.:20190541). Individual consent for this retrospective analysis was waived.