The 65-and-older population accounts for 11.94% of the total population in China, according to the latest data released by the China National Bureau of Statistics in 2018 (1). In addition, up to 78.4% of the people over 65 years of age in China have chronic diseases, a proportion much higher than that in other age groups (2). Elderly persons are apt to receive multiple drugs for many diseases, which, along with the special physiological status of elderly patients, can easily lead to potentially inappropriate medications (PIMs). First defined by Beers et al. (3) in 1991, PIMs are the drugs for which the effectiveness has not been established and/or the risk of an adverse drug event (ADE) outweighs the expected clinical benefit, particularly when there is no safer alternative therapy for the same condition. Research has shown that the number of diagnoses and the number of prescribed medications are associated with PIM use (4,5). As a result, the incidence of PIM use is particularly high in elderly patients due to their diseases and medications. PIMs may cause adverse drug reactions (ADRs) and lead to ADEs resulting in increased emergency department visits, hospitalizations, mortality, and health care costs (6,7). Therefore, identifying PIMs is clinically important.

The Beers criteria and the Screening Tool of Older Persons’ potentially inappropriate Prescriptions (STOPP) criteria are 2 valuable tools for detecting PIM. The Beers criteria have been widely used, and most Chinese studies on PIM in elderly patients also adopt the Beers criteria. Proposed by a research group at Cork University Hospital, Ireland, the STOPP criteria is a screening tool for PIM in elderly populations. Since the publication of the first edition of STOPP criteria in 2008, it has been used in more than 20 countries for evaluating clinical research and practices of irrational medication use in the elderly. It can effectively evaluate PIM use, strengthen the regulation of drug abuse, and reduce the incidence of ADEs in the elderly. In 2014, an expert panel updated the criteria, resulting in an overall 31% expansion of STOPP criteria (8). One study found that the STOPP criteria set was more sensitive than the Beers criteria set, as it could identify more PIMs and had a stronger correlation with ADEs (9). In China, most studies investigating PIMs in elderly patients are still using the Beers criteria, and the STOPP criteria are less often used. Most PIM studies have been performed in inpatients (10,11), and few studies have assessed PIM use in outpatients by using the STOPP criteria. Compared with the number inpatients, the number of outpatients is larger in and can better reflect the actual long-term medication use in elderly patients. Here, we evaluated the incidence of PIM use in elderly outpatients in the internal medicine departments at our center and explored the risk factors for PIMs by using the STOPP criteria (2014 version). We present the following article in accordance with the STROBE reporting checklist (available at http://dx.doi.org/10.21037/apm-21-799).

By using the STOPP criteria (2014 version), we analyzed the PIMs and their influencing factors in elderly outpatients in the departments of respiratory medicine, endocrinology, neurology, and cardiology in a tertiary hospital. We further assessed the variability of PIM use in different departments and diagnosed diseases, with an attempt to inform and promote the rational use of drugs in elderly patients.

The prescription data (including patient number, prescription date, department, gender, age, diagnosis, and medications) of elderly patients (age ≥65 years) in the 4 major internal medicine departments (i.e., the departments of respiratory medicine, endocrinology, neurology, and cardiology) at a tertiary hospital from January to March 2016 were exported using the Rational Drug Use software. The inclusion criteria for participants were age ≥65 years and having used at least one drug. The exclusion criteria included incomplete treatment or medication records. The judgment of PIMs was based on the STOPP criteria 2014 edition, which includes 12 sections (including Indication of Medication, Cardiovascular System, Antiplatelet/Anticoagulant Drugs, and Central Nervous System and Psychotropic Drugs) and 80 criteria items. As the creatinine clearance rate was not retrieved from our system, the “Renal System” section was excluded, and finally 74 prescriptions were included the final analysis. The study was conducted in accordance with the Declaration of Helsinki (as revised in 2013). The study was approved by the Ethics Committee of Xiaoshan Hospital (Hangzhou, China). Individual consent for this retrospective analysis was waived.

The statistical analysis was completed in SPSS 19.0 software package (IBM Corp.). The measurement data are presented as mean standard deviations () and were compared using the independent samples t-test. The count data are presented using cases and percentages and were compared using the chi-square test. The correlation analysis was performed by using the multivariate logistic regression method, and the results are expressed as the odds ratio (OR) and 95% confidence interval (95% CI). A P value of <0.05 was considered statistically significant.

Incidence of PIM use

Results of logistic regression analysis of risk factors for PIMs

A total of 1,785 PIMs were identified in the PIM group (n=1,040, with a maximum of 13 PIMs in a single patient). The most frequently detected PIMs were benzodiazepines, followed by hypnotic Z-drugs, and antipsychotics. All 3 medications are drugs that may lead to falls in elderly patients. Other PIMs included the following: (I) long-term aspirin administration at doses greater than 160 mg per day; (II) aspirin use in patients with a past history of peptic ulcer disease without concomitant proton-pump inhibitors (PPIs); (III) aspirin use in patients with a history of peptic ulcer without PPIs, as well as antipsychotic administration (i.e., other than quetiapine or clozapine) in those with parkinsonism or Lewy body dementia; (IV) nonsteroidal anti-inflammatory drugs (NSAIDs) use in patients with severe hypertension; and (V) NSAIDs other than COX-2 selective agents in patients with a history of peptic ulcer disease or gastrointestinal bleeding, unless administered with concurrent PPI or H2 antagonist (see Table 6). 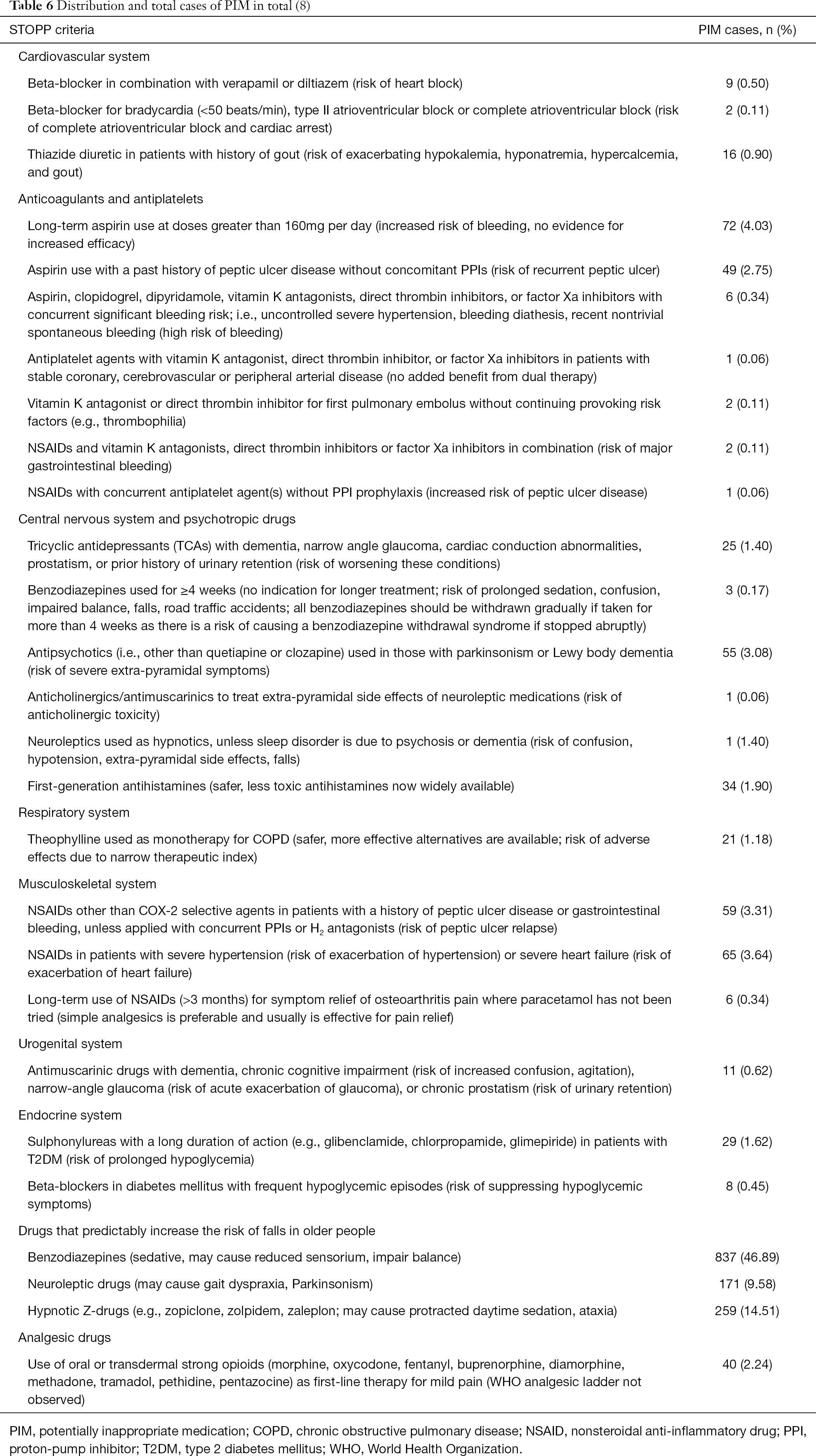 Incidence of PIM use

Risk factors of PIM use

Major PIM types and their distribution

The most frequent PIM in our current study was benzodiazepines (46.89%), followed by hypnotic Z-drugs (14.51%), and antipsychotics (9.58%). Other relatively common PIM types included long-term aspirin at doses greater than 160mg per day (4.03%) and aspirin with a past history of peptic ulcer disease without concomitant PPIs (2.75%), which was basically consistent with other studies (9,16,17). Apart from benzodiazepines and hypnotic Z-drugs (zolpidem) being the 2 common PIMs in all departments, the remaining top PIMs were department-specific. In the Department of Respiratory Medicine, theophylline as monotherapy for COPD was among the top PIMs. In the Department of Endocrinology, long-acting sulfonylureas for type 2 diabetes mellitus (T2DM) patients was a common PIM; notably, the use of glibenclamide was the most frequent PIM in outpatients in a Nigerian study (15), which might be due to the high proportion of T2DM patients among the outpatients. In the Department of Neurology, antipsychotics and long-term use of >160 mg aspirin were the major PIMs, which is related to the disease types in the Department of Neurology where aspirin is often used as a first-line drug for secondary prevention of cerebral infarction. Parkinson disease is also a neurological disease, and psychiatric symptoms are one of its nonmotor symptoms. A variety of antipsychotics are used in Parkinson disease patients, which is likely to aggravate Parkinson disease due to the extrapyramidal toxicities of these drugs. Furthermore, antipsychotics often cause falls in elderly patients. In the Department of Cardiology, NSAIDs for severe hypertension and NSAIDs other than COX-2 selective agents in patients with a history of peptic ulcer disease or gastrointestinal bleeding without concurrent PPIs ranked the third and fourth most common PIMs. Abegaz et al. (19) analyzed the PIMs in inpatients with cardiovascular diseases and found that the most common PIM was aspirin in combination with vitamin K antagonist in patients with chronic atrial fibrillation, which, however, was less common among out outpatients in the Department of Cardiology. Therefore, some PIMs (e.g., benzodiazepines) are commonly used in elderly outpatients in the internal medicine departments; however, the top-ranked PIMs vary across different departments and differ between outpatient clinics and inpatient wards. The medication habits also differ among different hospitals. Thus, the distribution of PIMs has its unique characteristics in different medical institutions.

In our current study, the incidence of PIMs among elderly outpatients was 7.87% according to the STOPP criteria. The main risk factors for PIM use were age, gender, number of prescribed medications, and number of diagnoses; the major PIMs were benzodiazepines, hypnotic Z-drugs, antipsychotics, and other drugs that increase the fall risk. The incidence of PIM use was highest in the Department of Neurology, and thus it is particularly important to prevent PIM use in this department. The risk factors for PIM use vary among different departments, which may be explained by the different underlying conditions of the outpatients. The distribution of PIMs is department-specific, although there are some shared PIMs. The corresponding preventive measures should be taken in these departments.

Our current study also confirmed that STOPP criteria could not only measure the incidence of PIMs but also identify the specific types of PIM in outpatients. Thus, it is a valuable tool for assessing prescriptions and identifying possible PIMs in elderly patients and deserves further application in clinical settings.

Reporting Checklist: The authors have completed the STROBE reporting checklist. Available at http://dx.doi.org/10.21037/apm-21-799

Conflicts of Interest: Both authors have completed the ICMJE uniform disclosure form (available at http://dx.doi.org/10.21037/apm-21-799). The authors have no conflicts of interest to declare.

Ethical Statement: The authors are accountable for all aspects of the work in ensuring that questions related to the accuracy or integrity of any part of the work are appropriately investigated and resolved. The study was conducted in accordance with the Declaration of Helsinki (as revised in 2013). The study was approved by the Ethics Committee of Xiaoshan Hospital (Hangzhou, China). Individual consent for this retrospective analysis was waived.