The effects of multiple controlled ovarian hyperstimulation over a 2-year period on ovarian reserve and reactivity: a retrospective clinical study

The use of assisted reproductive technology emerged nearly 40 years ago. In vitro fertilization and embryo transfer (IVF-ET) is a technology that uses assisted reproductive technology to transfer embryo combined with in vitro fertilization into the patient to achieve pregnancy. At present, the clinical pregnancy rate of a single IVF-ET event is 40–60%, and the live birth rate can reach 20–30%. However, there are still many infertile couples who cannot achieve clinical pregnancy after one round of IVF-ET (1). These patients usually receive multiple controlled ovarian hyperstimulation (COH) treatments to improve the probability of pregnancy. However, the effects of multiple COH treatments and multiple ovarian punctures (necessary for follicle collection) on ovarian reserve function remains controversial (2,3). Some researchers believe that repeated COH does not affect the ovarian reserve function, and by adjusting the treatment plan, high-quality embryo formation rates and clinical pregnancy rates are significantly increased after repeated COH treatments. Some scholars believe the use of high dose FSH may accelerate the consumption of follicle reserves and reduce ovarian reactivity (4).

In this study, the clinical data of patients who received multiple COH treatments were retrospectively analyzed to further clarify the changes in ovarian reserve function and its reactivity after multiple COH iterations. This information will provide a scientific basis for assessing the risks and benefits of repeated COH on female ovarian function.

We present the following article in accordance with the STROBE reporting checklist (available at http://dx.doi.org/10.21037/apm-21-330).

Medical records were collected from patients who received IVF/intracytoplasmic sperm injection (ICSI)-ET after 2–4 cycles of COH between January 2018 and August 2020.

The inclusion criteria were as follows: (I) female patients aged 20–40 years; (II) causes of infertility included fallopian tube factors, ovulation disorders, endometriosis, or female and/or male factors; and (III) the interval time of each COH treatment cycle was more than 3 months. The exclusion criteria were as follows: (I) the levels of follicle-stimulating hormone (FSH) were greater than 10 IU/L; (II) the number of antral follicles was less than 5; (III) the levels of anti-Müllerian hormone (AMH) were less than 0.8 ng/mL; and (IV) the interval time between the first COH and the last COH exceeded 2 years.

A total of 964 patient cycles of COH with complete data were included in this retrospective study. Among them, 375 patients were treated for 2 cycles of COH, 54 patients had 3 cycles, and 13 patients underwent 4 cycles. Self-control comparison was performed for all patients (Figure 1). 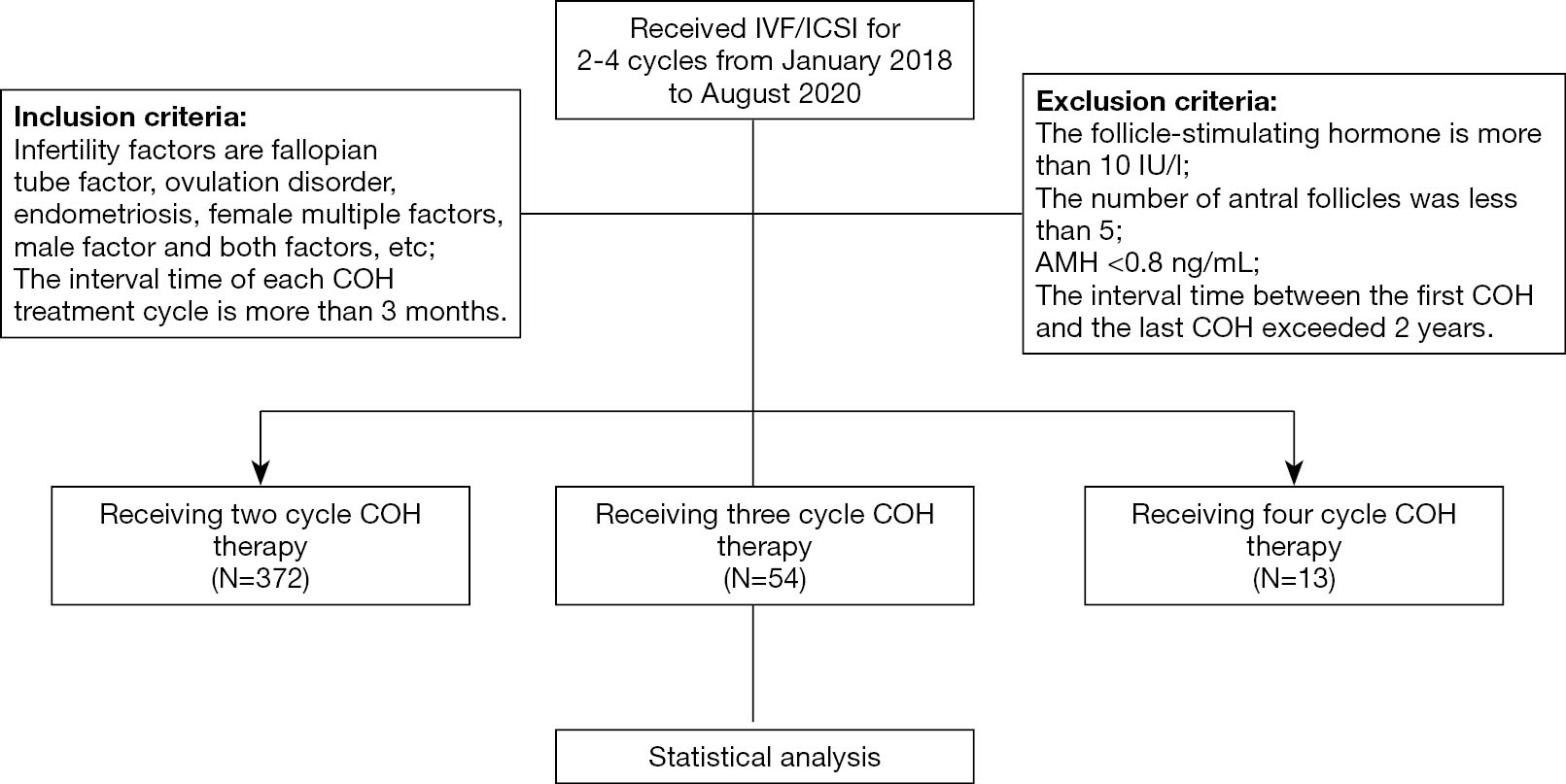 The study was conducted in accordance with the Declaration of Helsinki (as revised in 2013) and was approved by institutional ethics board of Beijing Gynecology and Obstetrics Hospital, Capital Medical University (No.: 2016-KY-085-01). Individual consent for this retrospective analysis was waived.

The ovarian stimulation plan for each patient was determined according to the levels of FSH and AMH, and the number of antral follicles. The patient’s response to medication at the previous ovulation induction was also considered. The ovarian stimulation plans included the gonadotropin-releasing hormone agonist plan (abbreviated as the agonist plan), the gonadotropin-releasing hormone antagonist plan (abbreviated as the antagonist plan), the luteal ovulation induction plan, and the micro-stimulation plan. When the diameter of 3 or more follicles measured 17 mm or greater, or when 2 or more follicles measured 18 mm or greater, the eggs were harvested by puncture under the guidance of transvaginal ultrasound after 36 hours using 250 mg recombinant human chorionic gonadotropin injection (Elzer, Serono Europe) or 0.2 mg triptorelin injection (Dabija, Huiling Pharmaceutical Co. Ltd.). The fertilization method was conventional IVF fertilization or ICSI fertilization.

After 16–18 hours of in vitro fertilization, the egg was examined under the dissecting microscope. Fertilized eggs with double pronucleus (2PN) were determined as normal fertilization. The quality of embryos in the cleavage stage was evaluated by observing the number and morphology of cleavage cells 3 days after collecting the eggs. The evaluation criteria for high-quality embryos were as follows: at least 8-cell embryos 3 days after harvesting the eggs; blastocysts observed 5 days after collecting the eggs; and the fragmentation of cleavage balls was less than 10%. The numbers of available embryos and high-quality embryos were recorded.

Data were expressed as mean ± standard deviation for continuous variables and as proportions for categorical variables. The Student’s t-test was used for pairwise comparison. Statistical analyses were performed using SPSS24.0 software. A P value <0.05 was considered statistically significant.

A total of 372 patients received 2 cycles of COH therapy. There were no significant differences in the levels of AMH, basal FSH, and antral follicle numbers before the start of each cycle (P>0.05; Table 1).

A total of 54 patients received 3 cycles of COH therapy. There were no significant differences in the levels of AMH, basal FSH levels, and antral follicle numbers before each cycle of ovulation induction (P>0.05; Table 3).

Compared with the first COH cycle, the amount of GN in the third cycle was significantly lower (P<0.05). However, there were no significant differences in the ovulation induction time, the number of eggs obtained, and the quality of embryos (P>0.05; Table 4).

A total of 13 patients received 4 cycles of COH therapy, and no significant differences were found in the levels of AMH, basal FSH levels, and antral follicle numbers before each cycle of ovulation induction (P>0.05; Table 5).

Ovarian reserve function refers to the ability of ovarian cortical follicles to grow and develop and into mature oocytes, which is manifested by the number of follicles and the quality of oocytes existing in the ovary (5). At present, the most commonly used indicators for evaluating ovarian reserve function include age, AMH levels, basal hormone endocrine levels including FSH, luteinizing hormone (LH) and estradiol (E2), and basal antral follicle numbers (6).

During COH, the extra-physiological dose of GN can promote the growth and development of other follicles, avoid the occurrence of follicular atresia, and stimulate multiple oocytes. Some studies have shown that FSH stimulation at super-physiological doses may promote the growth of the remaining follicles in the follicular pool and contribute to the recruited antral follicles, thus accelerating the depletion of the follicular pool (7).

In addition, it has been reported that repeated vaginal puncture of the ovary may lead to the release of ovarian autoantigens, resulting in a decrease in the number of follicles in the follicular pool (8). Other studies have shown that transvaginal follicular puncture may damage ovarian capillaries and peripheral ovarian tissues. This has a cumulative negative effect with each increasing number of punctures. Other reports have suggested that GN will change the physiological choice of a single dominant follicle, but will not accelerate the recruitment of follicles from the next cycle, indicating that repeated COH has no adverse effects on ovarian function (3).

Infertile women aged 20–40 years were selected for this study. The results demonstrated that there were no significant changes in the basal FSH and AMH levels between each cycle of COH in patients who received 2–4 cycles of COH. This suggesting that COH, up to 4 cycles, did not lead to any significant decrease in ovarian reserve function. However, in patients receiving 2–4 cycles of COH therapy, AMH gradually decreased with each ovarian stimulation cycles, and basal FSH gradually increased. The number of antral follicles also gradually decreased with the increase of ovarian stimulation cycles. Although there was no statistical significance in the above differences, with the increase of each COH cycle, the ovarian reserve function gradually decreased. It remains to be determined whether this phenomenon is caused by the increase in the age of the patients.

Ovarian reactivity refers to the response of the ovary to GN during COH, and this is measured by GN dosage, ovulation induction time, number of eggs, and other indicators (9). At present, reports examining the effects of repeated COH on ovarian reactivity remain controversial.

Some researchers found that 25% of patients who used the antagonist regimen for repeated COH had increased GN dosage and decreased ovarian reactivity, while 75% of patients had no obvious changes in ovarian reactivity (10). However, our current study showed that the GN dosage in the third cycle was lower than that in the first cycle among women who had undergone COH for 3 cycles. This may be related to the downward trend of the number of follicles in the basal sinus after 2 cycles of COH treatment, and this may have led to more doctors adopting micro-stimulation or less GN to promote ovulation. Among women who had undergone 4 cycles of COH, the ovulation induction time in the fourth cycle was longer than that in the first cycle. This may be related to a decrease in ovarian reactivity.

In IVF treatment, most patients will receive large doses of GN stimulation and be subjected to repeated surgery for egg harvesting. Whether these treatments have a negative effect on ovarian reserve and responsiveness remains controversial (7,13,14).

The results in this present study demonstrated that up to 4 cycles of COH treatment and egg harvesting did not significantly affect the ovarian reserve function. However, 4 cycles of COH may lead to a degree of decline in ovarian responsiveness. The second COH cycle resulted in an increased number of high-quality embryos, while the third and fourth COH cycles also showed an increasing trend in the number of high-quality embryos. This may be related to the adjustment of the protocol and the appropriate application of growth hormone.

In summary, up to 4 cycles of COH treatment is safe, and reproductive physicians need to conduct a comprehensive evaluation of individual patients and select reasonable row-promoting modes, drug doses, and pre-treatment modes to obtain a satisfactory outcome.

Reporting Checklist: The authors have completed the STROBE reporting checklist. Available at http://dx.doi.org/10.21037/apm-21-330

Conflicts of Interest: All authors have completed the ICMJE uniform disclosure form (available at http://dx.doi.org/10.21037/apm-21-330). The authors have no conflicts of interest to declare.

Ethical Statement: The authors are accountable for all aspects of the work in ensuring that questions related to the accuracy or integrity of any part of the work are appropriately investigated and resolved. The study was conducted in accordance with the Declaration of Helsinki (as revised in 2013) and was approved by institutional ethics board of Beijing Gynecology and Obstetrics Hospital, Capital Medical University (No.: 2016-KY-085-01). Individual consent for this retrospective analysis was waived.