Melanomas are malignant tumors that develop from melanocytes. Most melanomas originate in the skin; however, a handful of melanomas occurring in mucous membranes have been reported. Melanomas are composed of epithelioid cells arranged in nests or spindle cells arranged in bundles (1). The presence of a small number of melanocytes in the squamous epithelium may be a precursor to melanoma.

Primary malignant melanoma of the esophagus (PMME) is a rare tumor, accounting for less than 0.5% of esophageal tumors, with variable pathology and cytology. PMMEs mostly occur in people over the age of 60 years, and males are more susceptible than females to developing this disease. Approximately 70% of PMMEs are located in the middle and lower thirds of the esophagus (2), which may be associated with a higher accumulation of melanin in these regions. Risk factors for PMME include familial genetic history, immunosuppression, multiple atypical nevi, history of melanoma, sensitivity to sunlight, and radiation exposure (3). However, due to the rarity of PMME, relevant epidemiological data are lacking, and the pathogenesis and molecular biological characteristics of this malignancy have not been clarified.

The diagnosis and treatment of PMME are challenging and require extensive investigation by clinicians with relevant expertise. PMME is prone to misdiagnosis as esophageal leiomyoma, esophageal cancer, or other common esophageal diseases. Owing to PMME having a low degree of differentiation, most patients have already entered the middle or advanced stage at the time of diagnosis (4), resulting in a poor prognosis.

Positron emission tomography/computed tomography (PET/CT) imaging is currently considered to be the most sensitive method for the identification of metastatic lesions of solid tumors. Metabolic information provided by PET combined with CT anatomic images improves the diagnosis, staging, and treatment evaluation of tumors, and has a huge impact on patient management (5).

In this article, we present the case of a patient with PMME who underwent 18F-fluorodeoxyglucose (18FDG)-PET/CT imaging, which showed multiple metastases in the skull, bilateral acetabulum, and bilateral cervical lymph nodes, but no radio-uptake in the primary esophageal lesion.

We present the following article in accordance with the CARE reporting checklist (available at http://dx.doi.org/10.21037/apm-21-649).

The patient, a 60-year-old female, visited the hospital after experiencing pain on the right side of the head for 1 month. Physical examination showed no obvious nodule pigmentation or skin lesions, nor was any palpable lymph node enlargement observed in the body. Laboratory test values and tumor markers were within the normal range. Brain MRI showed an abnormal nodular signal in the right frontal bone. Subsequent chest CT examination revealed no significant abnormalities (Figure 1). Pelvic MRI revealed nodular edema in the bone marrow of the bilateral acetabulum (Figure 2). 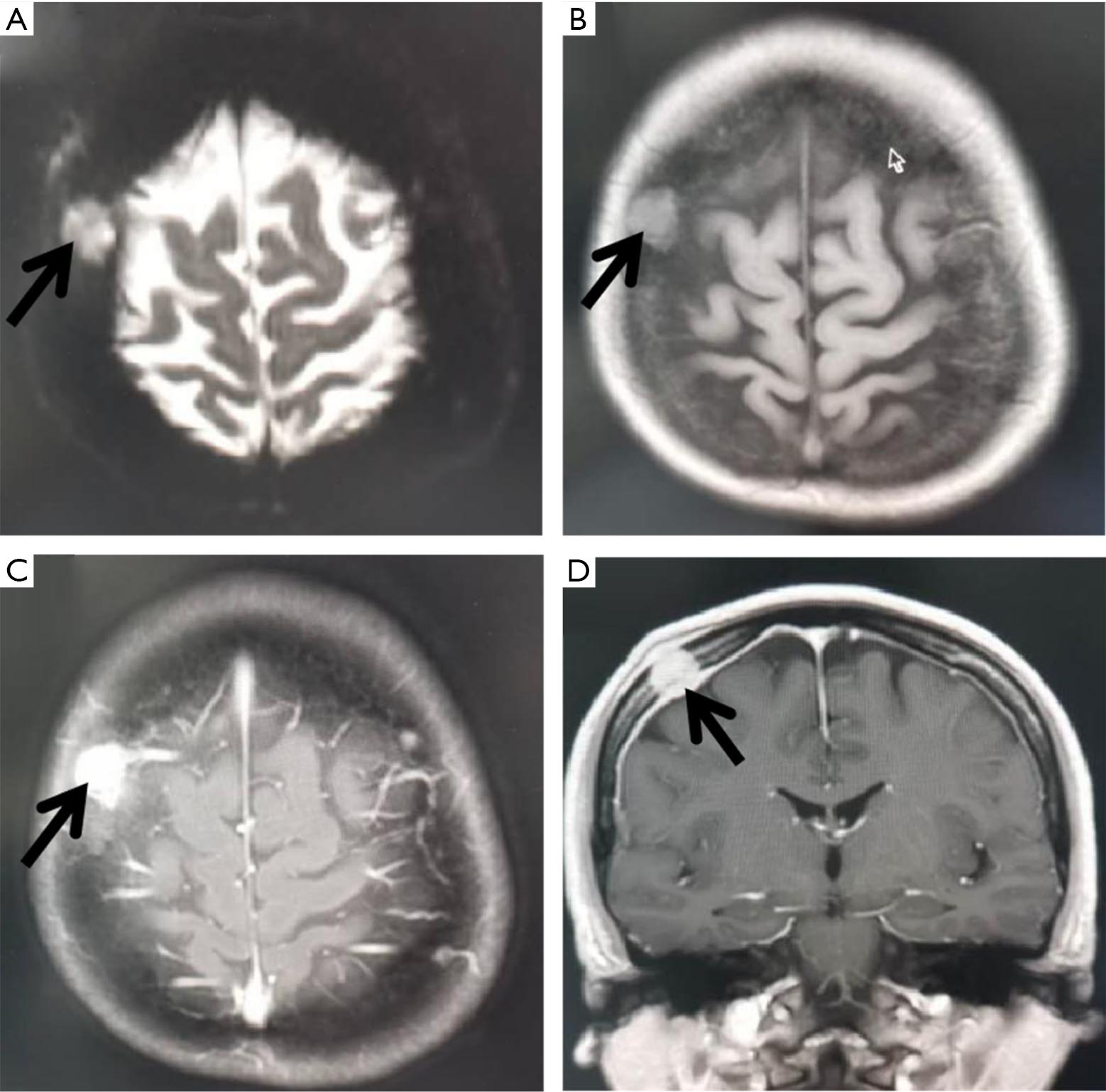 Based on the above results, multiple metastases were highly suspected by the clinician. Subsequently, the patient underwent FDG-PET/CT full-body imaging at the doctor's order. Figure 3 presents 18FDG-PET/CT images. The images showed lesions with high metabolic uptake in the right frontal bone, bilateral acetabulum, bilateral cervical lymph nodes, and rectum, which were considered to be malignant lesions; however, it was unclear which of the lesions was the primary tumor. As the lesions in the frontal bone, bilateral acetabular, and cervical lymph node were not suspected as being primary lesions, the patient underwent digital rectal examination and colonoscopy, which found no abnormalities. This presented a dilemma for the treating physicians in giving the patient a clear diagnosis, and they subsequently decided to organize a multidisciplinary consultation. It was ultimately agreed that the patient should undergo extensive gastrointestinal endoscopy. 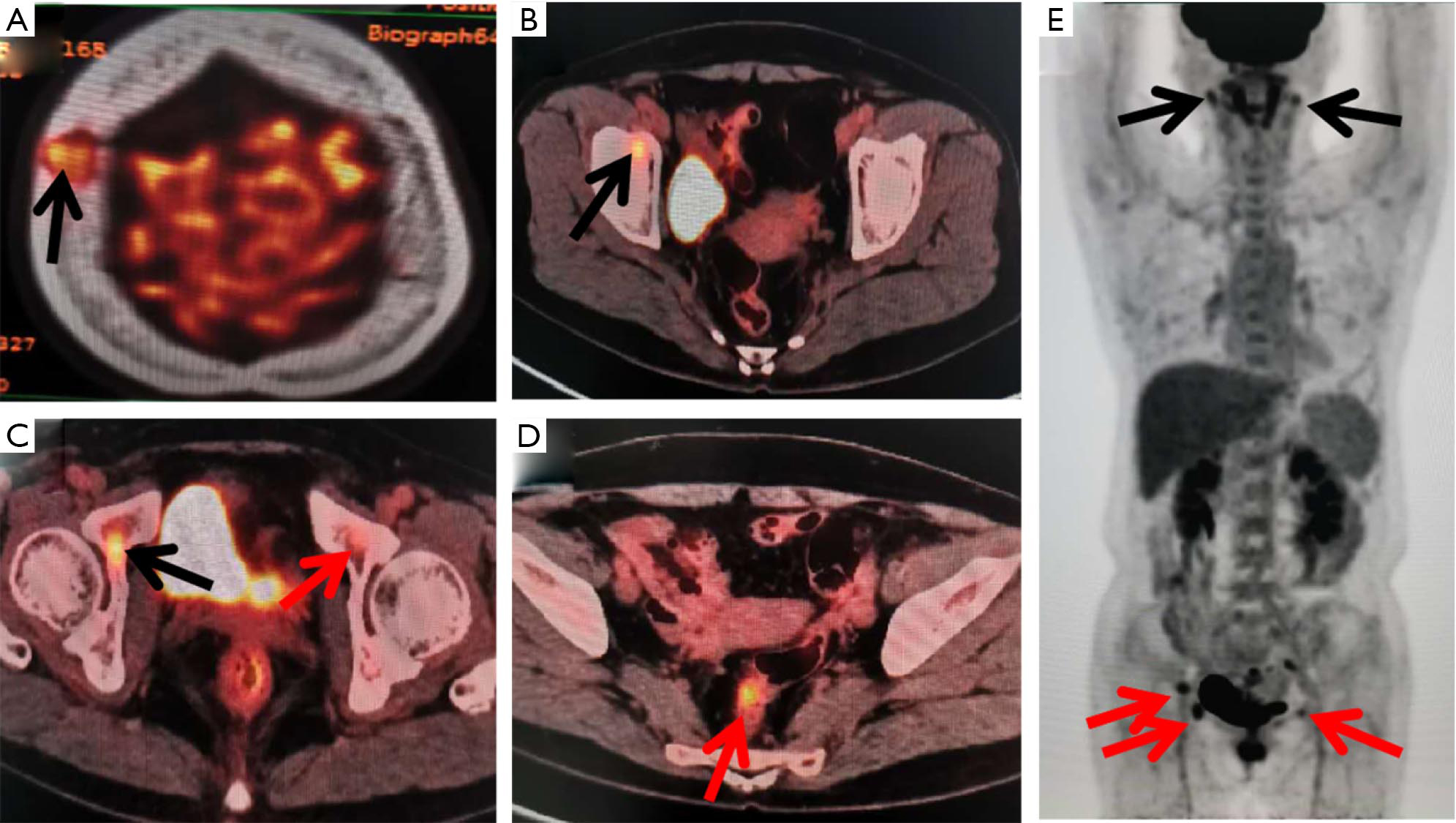 The patient underwent gastrointestinal endoscopy. Under the narrow band imaging mode of the duodenoscope, pigmentation was observed in the mucosa of the lower esophageal segment (Figure 4). The pigmented area in the esophagus measured approximately 0.8 cm and had a discernible boundary. The intrapapillary capillary loop was classified as B1, and a biopsy was taken for analysis. Additionally, a small amount of pigmentation could be seen at the duodenal papilla, and hyperemic edema was found in the mucosa of the gastric antrum, but no ulcer or mass was present. The duodenal papilla was swollen and dark brown with dilated blood vessels on the surface, and a biopsy was taken for analysis. No other abnormalities were found in the mucosa of the duodenal bulb or the upper descending segment. 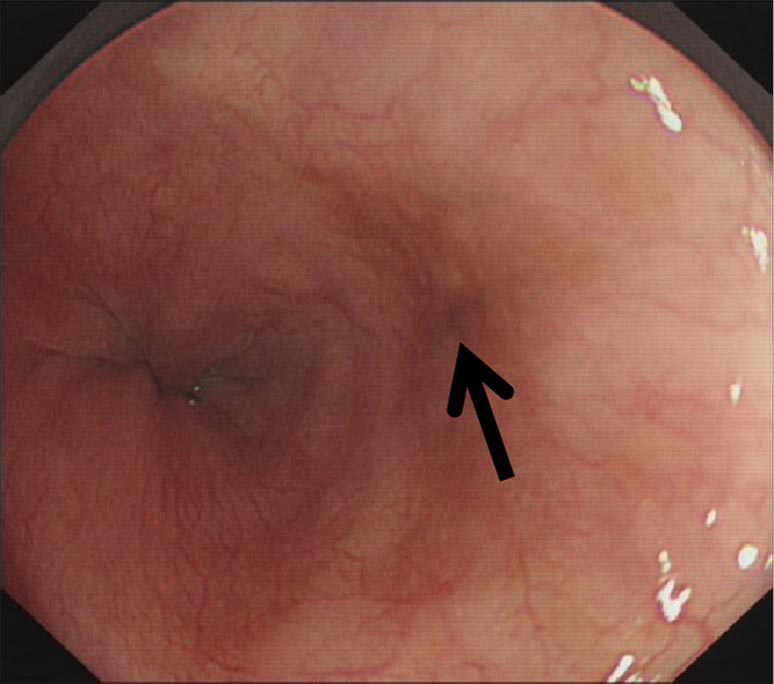 Figure 4 The duodenoscopy results of the patient. Pigmentation of the mucosa in the lower esophagus seen under duodenoscopy (arrow).

The tissues extracted by endoscopic biopsy were stained with hematoxylin-eosin, which suggested a malignant phenotype (Figure 5A). Immunohistochemical staining showed positivity for S-100 (Figure 5B), human melanoma black (HMB)-45 (Figure 5C), and Melan-A (Figure 5D), as well as Ki-67 positivity in 30% of cells. Based on all morphological and functional examination results, and after the exclusion of skin pigmentation nodules, the patient was finally diagnosed with PMME with duodenal, skull, bilateral hip, and bilateral neck lymph node metastases. All procedures performed in studies involving human participants were in accordance with the ethical standards of the institutional and/or national research committee(s) and with the Helsinki Declaration (as revised in 2013). Written informed consent was obtained from the patient. 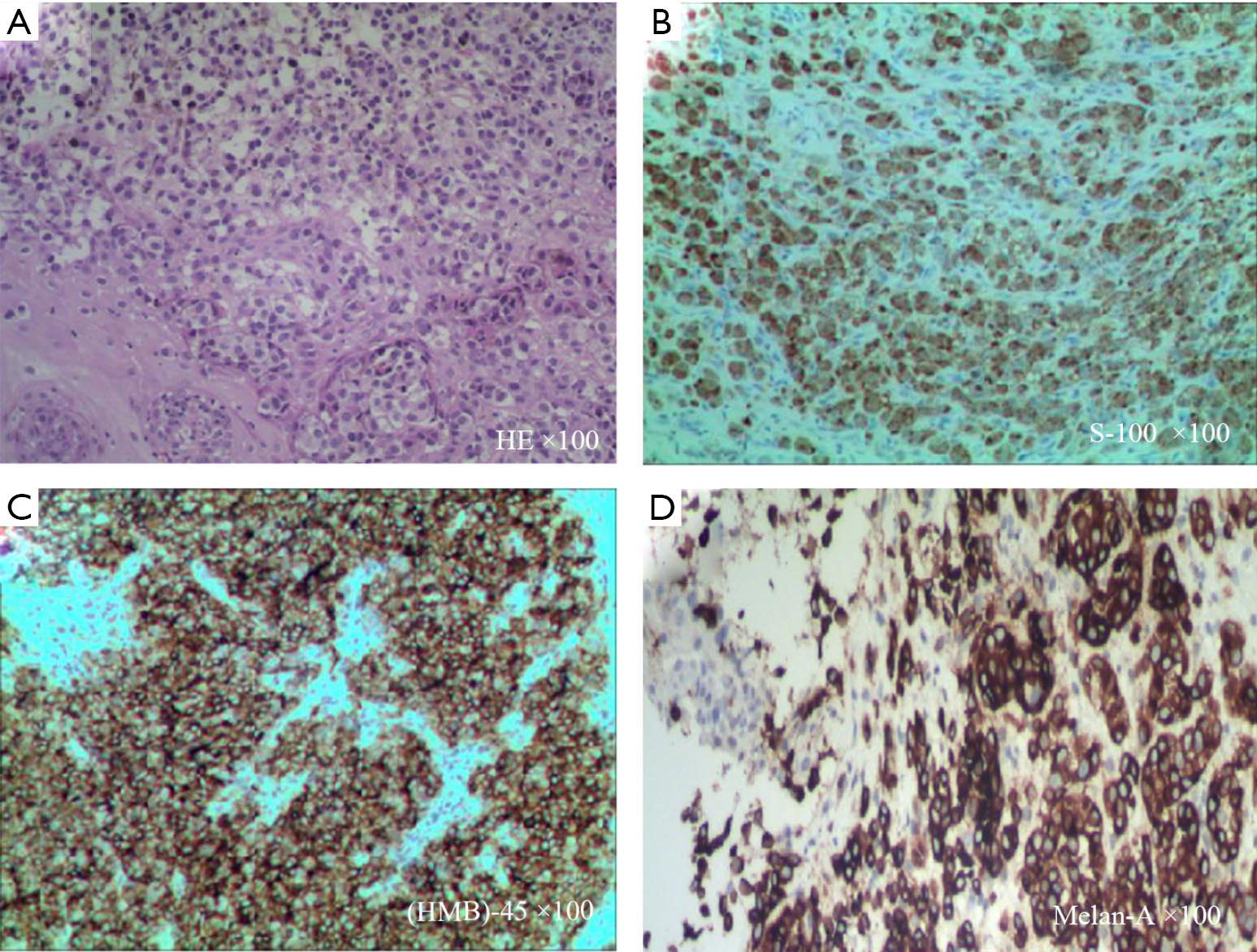 Accounting for roughly only 0.5% of esophageal tumors (6), PMME is a rare tumor originating from melanocytes in the neural crest. The existence of melanocytes in the basal layer of the esophageal mucosa and the junction between the epithelium and the stroma forms the basis of PMME. Although the pathogenesis of this malignancy is not clear, it may be related to factors such as gastric acid reflux, long-term repeated inflammatory stimulation, ethnicity, and familial inheritance. Chronic esophagitis and local esophageal epithelial melanocytosis may be precancerous lesions of PMME (7). In the early stage, patients with PMME experience no obvious clinical symptoms. However, as the disease progresses, it can manifest as nausea, vomiting, progressive dysphagia, and other non-specific symptoms. For instance, the patient in the current case report initially presented with dizziness, headache, and other secondary symptoms of skull metastasis.

The diagnosis of PMME should be based on the results of pathological examination. Under hematoxylin-eosin staining, melanoma cells can differ in size and shape (round, oval, or fusiform), and have visible mitosis and melanin granules in the cytoplasm. Immunohistochemistry is the main method for identifying this type of melanoma, and 3 indicators (S-100 protein, HMB-45, and Vimentin) are specific for the diagnosis of malignant melanomas. Consistent with other reports, in our patient, the diffuse expression of HMB-45, Melan-A, and S-100 was detected in tumor cells, which were negative for Cytokeratin (CK) (8).

In patients with malignant melanoma, local lymph node metastasis is known to occur first, followed by blood metastasis. The liver, lungs, and skin are the common metastatic organs (9), and the small intestine is also a common site for metastasis of melanoma due to its rich blood supply and lymph nodes (10). However, in the case reported here, no metastatic lesions were found in the patient’s liver or lungs, which presented a conundrum for our clinicians. Imaging examination plays an important role in the diagnosis and treatment of PMME, as it can locate the lesion, accurately detect the scope of tumor invasion, facilitate clinical staging, and aid in selecting the treatment plan. FDG-PET/CT is considered to be the most accurate technique for locating metastatic lesions of melanoma. Crippa et al. (10) found that FDG-PET/CT could detect PMME with a sensitivity of 100%, 83%, and 23% for tumors with a diameter of >1.0, 0.6–1.0, and ≤0.5 cm, respectively. In the patient we studied, the maximum diameter of the tumor was 0.8 cm, but it was negative on FDG-PET/CT imaging. The possible reasons for this include the small size of the tumor, insignificant changes in glucose metabolism, and the limited sensitivity of PET. Another reason for PMME lesions being falsely reported as negative on PET imaging in the literature is that the tumor tissue being covered by normal epithelial cells (11,12). Nevertheless, FDG-PET/CT imaging is still superior to traditional imaging modalities such as CT and MRI for the evaluation of regional lymph node metastasis and distant metastasis (13). In clinical practice, FDG-PET/CT imaging was reported to change the management of more than 20% patients and increase the metastasis detection rate by 15% (14). Furthermore, the high sensitivity of PET for asymptomatic or unresectable PMME could guide therapy (15), and one study (16) reported changes in the staging and treatment of one-quarter of patients with PMME following PET/CT imaging.

By the time symptoms manifest, patients with PMME often have distant metastasis, so their prognoses are extremely poor compared to those of patients with other esophageal malignancies. Even in the early stage of PMME, there is a strong possibility of invasion and distant metastasis (17). Without intervention, the 5-year survival rate of PMME is less than 5%, which is lower than the rate of 20% among patients with esophageal adenocarcinoma. For patients without distant metastasis, surgical resection is the preferred treatment, but the average postoperative survival time is short and the 5-year survival rate is low. Radiotherapy, chemotherapy, and immunotherapy are treatment options for patients who have lost the opportunity for surgery, but none of them are significantly effective (18). Even though the primary esophageal lesion of the patient in our study was small, she had several distant metastases, which fully demonstrates this disease’s high degree of malignancy. Since the distant metastases were in the advanced stage, the patient was only given targeted drug therapy.

In summary, the diagnosis of primary malignant melanoma in body parts other than the skin is challenging, and multiple tests are needed to obtain an accurate diagnosis. When the diameter of the lesion is small, there is no significant change in the patient’s anatomy or metabolism, and the lesion does not cause visual changes; furthermore, if the tumor tissue is covered by normal epithelium and does not uptake radioactive tracer, the possibility of a false negative 18F-FDG PET/CT imaging result still exists. Therefore, in future research, efforts should be made to explore the use of new radioactive tracers to improve the detection rate of extracutaneous malignant melanomas. Nevertheless, 18F-FDG PET/CT is still superior to traditional imaging examination methods for the comprehensive and accurate evaluation of regional lymph node and distant metastasis, and can detect more metastatic foci than both CT and MRI. For the final diagnosis of PMME, the results of 18F-FDG PET/CT imaging should be combined with histopathological examination.

Funding: This research was supported by the National Natural Science Foundation of China (grant number 81960532).

Reporting Checklist: The authors have completed the CARE reporting checklist. Available at http://dx.doi.org/10.21037/apm-21-649

Conflicts of Interest: All authors have completed the ICMJE uniform disclosure form (available at http://dx.doi.org/10.21037/apm-21-649). The authors have no conflicts of interest to declare.