The skin is the human body’s largest organ. The healing process after injury to the skin is long. The ideal scar is flat and almost invisible; however, excessive fibrous tissue repair during the wound healing process can lead to hypertrophic scarring (HS) (1). Although HS is not a malignant disease, it can seriously affect an individual’s daily life.

Studies have shown that microRNAs (miRNAs or miRs) may be involved in the formation and development of HS. miRNAs are a type of non-coding single-stranded small RNA with an approximate length of 21–25 nucleotides. By mediating post-transcriptional regulation, they exert various biological functions, including proliferation, apoptosis, and invasion (2). For instance, Zhang et al. reported that the downregulation of miR-137 expression can induce the proliferation and metastasis of skin fibroblasts, and promote HS formation and development (3). Furthermore, a study by Wu et al. showed that miR-155 was downregulated in both HS tissues and HS-derived fibroblasts, and therefore suggested it as a potential therapeutic target for HS (4). Through a miRNA microarray analysis, Rang et al. observed the significantly up-regulation of miR-181a in HS tissues and cells, and that miR-181a promoted the proliferation of fibroblasts and inhibited their apoptosis (5).

The phosphatidylinositol kinase 3/protein kinase B (PI3K/AKT) signaling pathway has been shown to be closely related to HS formation (6), and multiple reports have demonstrated that its activation is mediated by phosphatase and tensin homolog (PTEN) (7). Through the mining of the ENCORI gene bank, PTEN was found to be the downstream target gene of miR-181a. Nonetheless, few studies to date have investigated the role of miR-181a in HS. Therefore, in the hope of unveiling a new therapeutic strategy for HS, the present study aimed to verify the targeting relationship between miR-181a and PTEN, and to explore the effects of miR-181a and PTEN on the proliferation and apoptosis of HS fibroblasts at the cellular level. We present the following article in accordance with the MDAR checklist (available at http://dx.doi.org/10.21037/apm-21-604).

HS tissues and the normal skin tissues from 20 patients who underwent scar resection in our hospital between March 2016 and December 2019 were collected. Among them were 7 males and 13 females between the ages of 18 and 62 years old. All patients were diagnosed with HS, confirmed via clinical and pathological diagnosis. All procedures performed in this study involving human participants were in accordance with the Declaration of Helsinki (as revised in 2013). Each patient signed an informed consent form, and approval for the study was granted by the ethics committee of Xinxiang Central Hospital.

ESF1 cells and HSFb were seeded in a 6-well plate at a density of 5×104 cells/well and cultured in RPMI 1640 Medium containing 10% FBS and 1% penicillin-streptomyces. The cells were then placed at 37 °C with 5% CO2 in a constant-temperature incubator. After 24 hours of incubation, HSFb were transfected with miR-negative control (miR-NC), miR-181a mimics, miR-181a inhibitor, pcDNA3.1-PTEN (pc-PTEN), or small interfence-PTEN (si-PTEN) plasmids (sequence: 5'-GACGGGAAGACAAGUUCAUTT-3') according to the instructions accompanying the Lipofectamine 2000 transfection kit. The transfected cells were then incubated at 37 °C in a constant-temperature incubator containing 5% CO2 for a further 48 hours before subsequent experiments.

Determination of miR-181a and PTEN expression

Total RNA was extracted from normal skin (normal) tissue, HS tissue, ESF-1 cells, and HSFb using TRIzol reagent. The miScript reverse transcription (RT) kit was used for synthesis of the corresponding cDNA. The following condition was used for RT: 16 °C for 30 minutes, 42 °C for 30 minutes, and 85 °C for 5 minutes, then maintenance at 4 °C. The SYBR Premix Ex TaqTM II kit was then used for the measurement of miR-181a and PTEN expression. The thermal cycling conditions for polymerase chain reaction (PCR) were as follows: 95 °C for 5 minutes, 95 °C for 15 seconds, and 60 °C for 30 seconds, for a total of 40 cycles. The 2−∆∆Ct method was used to calculate the relative expression levels of miR-181a and PTEN with U6 and GAPDH used as an internal reference, respectively. The primer sequences used in this study are listed in Table 1. 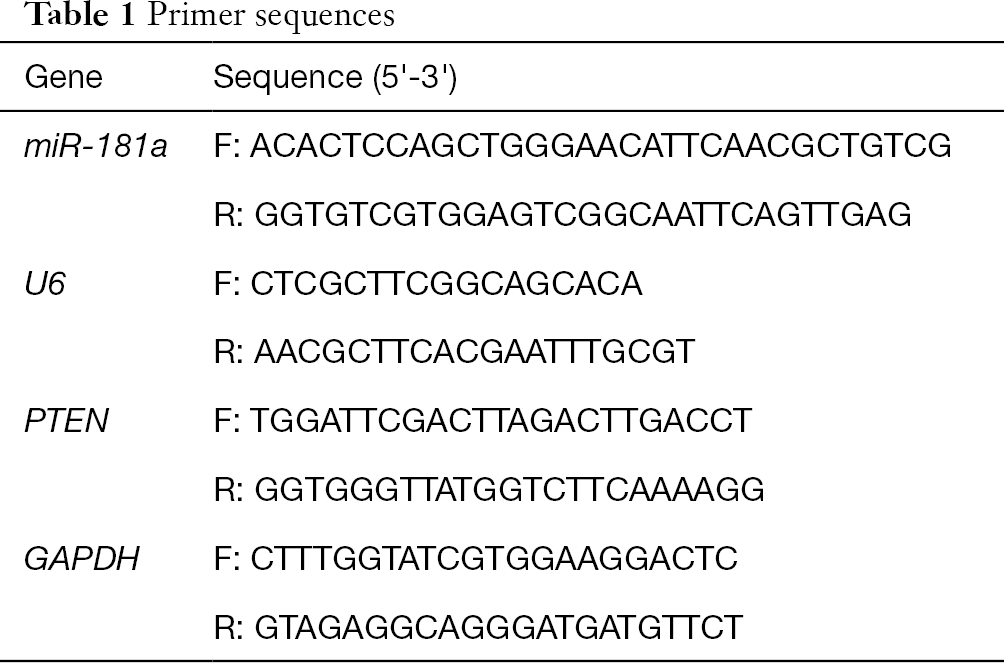 The lysate was used to extract total protein from normal skin tissue, HS tissue, ESF-1 cells, and HSFb. The protein concentration was then measured using the BCA kit. After that, the 10% sodium dodecyl sulphate-polyacrylamide gel electrophoresis (SDS-PAGE) was used to separate the proteins (30 µg/lane), which were then transferred to a polyvinylidene difluoride (PVDF) membranes. Next, the membrane was sealed with 5% skimmed milk powder for 1.5 hours at room temperature. Then, diluted antibodys of PTEN (1:1,000), Col-1 (1:1,000), Col-3 (1:1,000), Bcl-2 (1:1,000), Bax (1:1,000), caspase-3 (1:1,000), c-caspase-3 (1:1,000), caspase-9 (1:1,000), and c-caspase-9 (1:1,000) was added, before incubation overnight at 4 °C. After 3 washes with phosphate-buffered saline (PBS) buffer, goat anti-rabbit IgG secondary antibody (1:2,000) was added to the membrane, which was then incubated at room temperature for 1 hour. After incubation, the ECL kit was used for blot development. The gray value of each band was analyzed with Image J software, and the relative expression level of each protein was calculated.

Verification of the relationship between miR-181a and PTEN

Wild-type PTEN (WT-PTEN) and mutant PTEN (MUT-PTEN) were cloned into the pmiR-RB-ReportTM dual-luciferase reporter plasmid vector. HSFb in the logarithmic growth phase were seeded in a 24-well plate at a density of 1×104 cells/well and incubated overnight at 37 °C with 5% CO2 in a constant-temperature incubator. Then, HSFb were transfected with miR-NC and WT-PTEN, miR-NC and MUT-PTEN, miR-181a and WT-PTEN, or miR-181a and MUT-PTEN according to the instructions accompanying the Lipofectamine 2000 transfection kit. After 48 hours of transfection, the relative luciferase activity was measured in each well using Renilla luciferase activity as a reference.

HSFb were cultured in 96-well plates at a density of 5×103 cells/well. Either miR-NC, miR-181a mimics, miR-181a inhibitor, pc-PTEN, or si-PTEN was used to transfect the cells, and then cultured at 37 °C with 5% CO2 in a constant temperature incubator for a further 48 hours after transfection. Next, 10 µL of CCK-8 solution and 90 µL of RPMI 1640 Medium were added to each well. After incubation for 4 hours, a microplate reader was used to measure the absorbance value of each well at 450 nm.

HSFb in the logarithmic growth phase were transfected with either miR-NC, miR-181a mimics, miR-181a inhibitor, pc-PTEN, or si-PTEN, and then cultured at 37 °C with 5% CO2 in a constant-temperature incubator. After 48 hours of incubation, the cells were washed 3 times with pre-chilled PBS buffer and then stained in the dark by using the Annexin V-FITC/PI Apoptosis Detection Kit. After 15 minutes of staining, cell apoptosis was then detected by flow cytometry.

SPSS 20.0 software developed by IBM (Armonk, New York, USA) was used for the experimental data analysis, and the GraphPad Prism 8.2.1 software was used to draw statistical graph. All tests were repeated 3 times, and the measurement data values were expressed as mean ± standard deviation (). Data between the 2 groups that conformed to a normal distribution were analyzed using t-test. Data between multiple groups were analyzed by one-way analysis of variance (ANOVA) and randomized block design ANOVA. P<0.05 was used for statistically significance.

Expression of miR-181a in HS tissues and cells 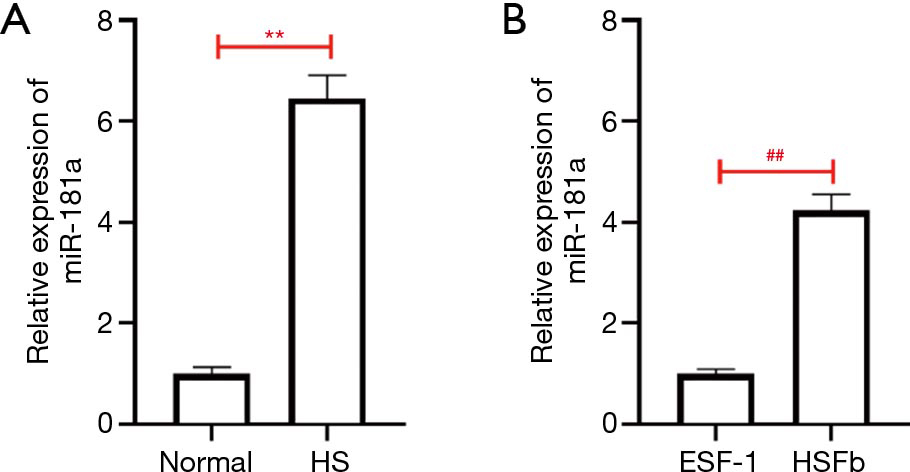 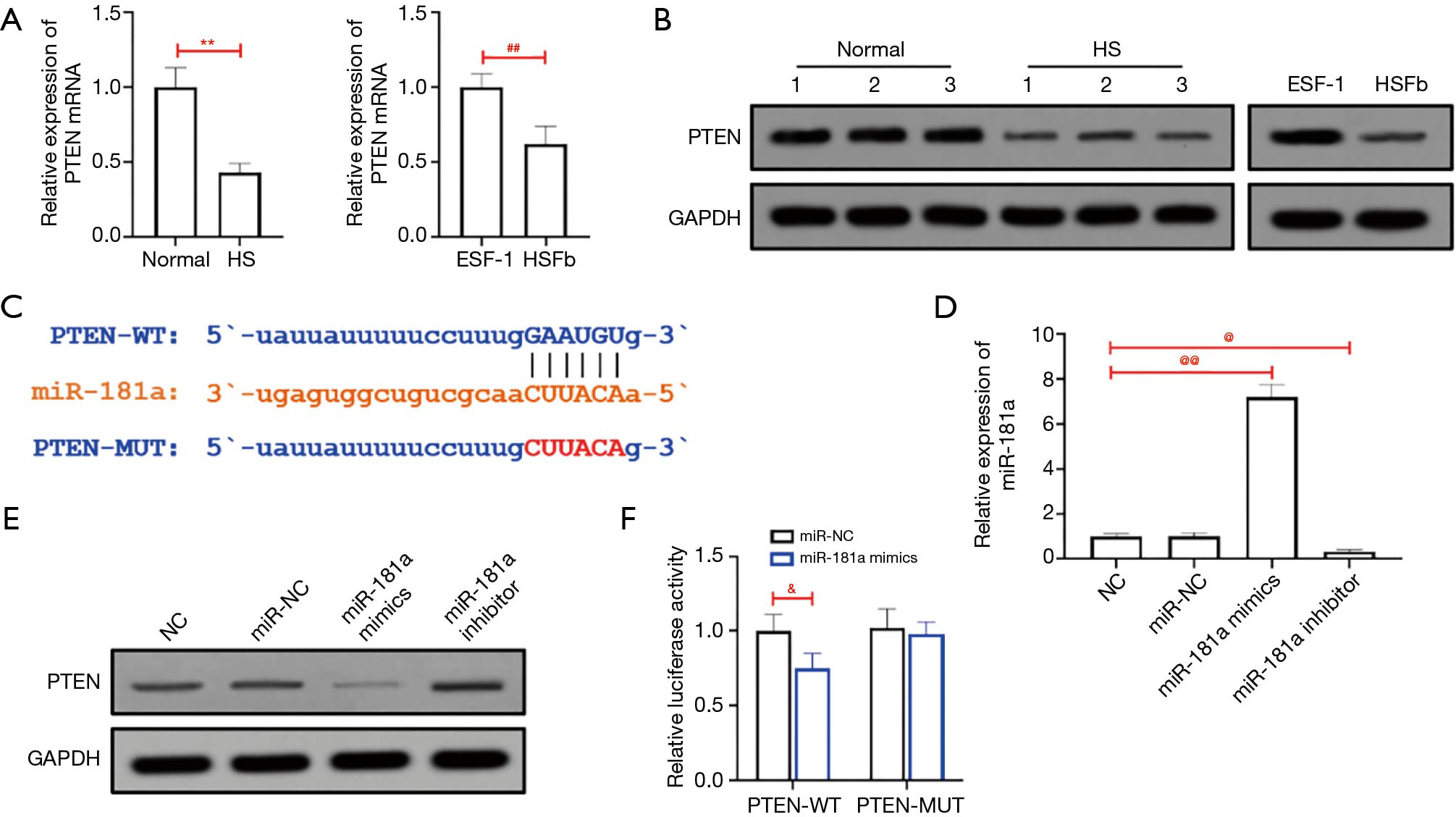 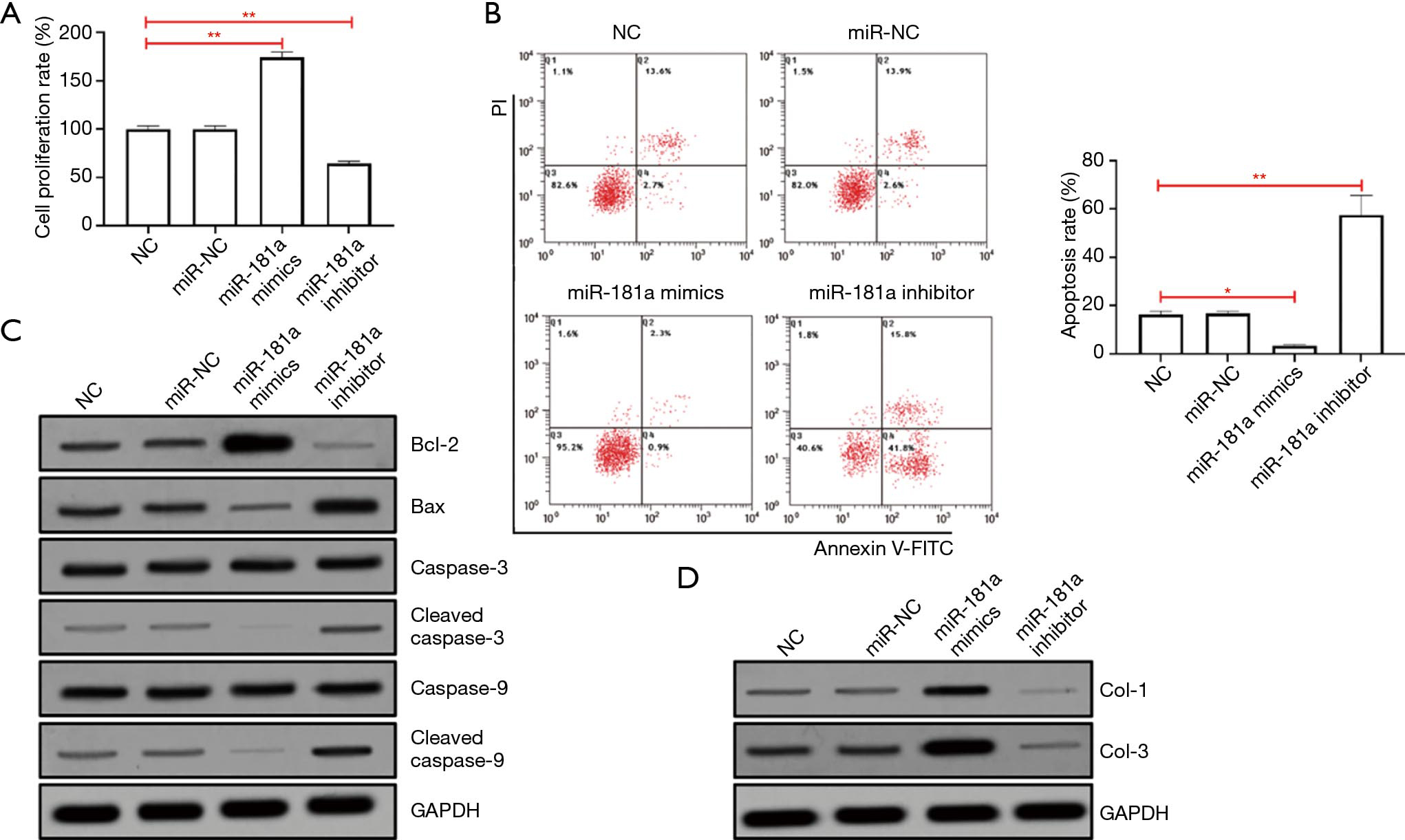 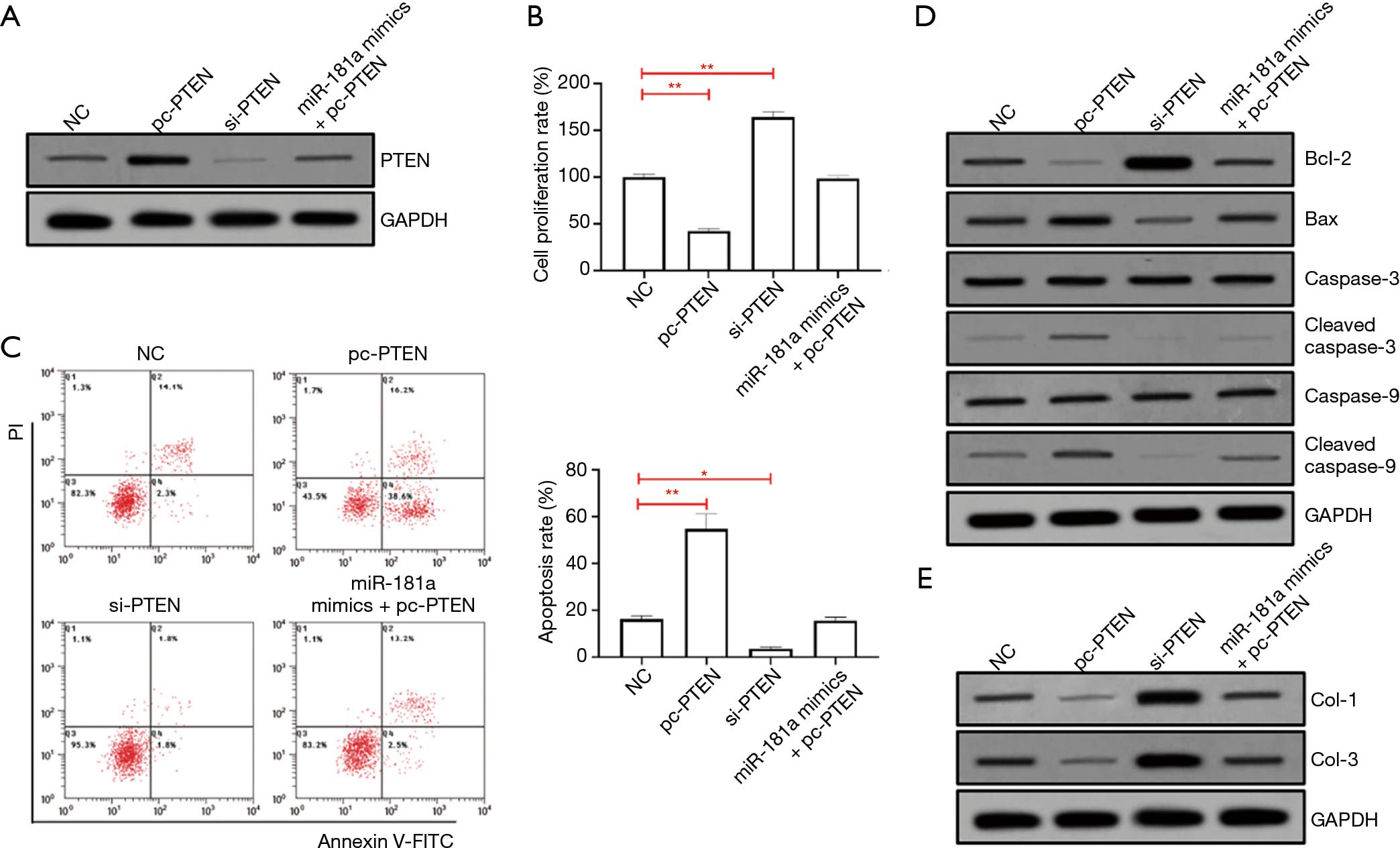 Figure 4 Phosphatase and tensin homolog (PTEN) regulates human scar fibroblast (HSFb) proliferation and apoptosis in vitro as a downstream target gene of miR-181a. (A) The expression level of phosphatase and tensin homolog (PTEN) protein in HSFb determined by western blot; (B) the effect of PTEN on HSFb proliferation determined by Cell Counting Kit (CCK)-8 experiment; (C) the effect of PTEN on HSFb apoptosis detected by the flow cytometry; (D,E) the effect of PTEN on the expression of apoptosis-related proteins and collagens in HSFb detected by western blot. *P<0.05 and **P<0.01 vs. negative control (NC) group.

HS is 1 of the most common skin conditions, occurring in 30% of patients who suffer burns and scalds (8). Although HS can be treated with surgery, it may recur after surgical treatment. Multiple studies have shown that fibroblasts play a role in the processes of tissue repair and wound healing. In particular, the proliferation and apoptosis of HSFb are critical in the formation of HS (9). Therefore, elucidating the molecular mechanisms of HSFb proliferation and apoptosis may aid in the development of new treatment methods for HS.

PTEN is a dual phosphatase located on chromosome 10q23.3 that can inhibit tumor development. It can exert an anti-apoptotic effect by regulating the activity of the PI3K/AKT signaling pathway, as well as promote cell proliferation (18). Studies have shown that the loss of PTEN expression is associated with the formation of HS (7,19,20); consistent with this, our study found that the expression of PTEN mRNA in HS tissues and HSFb was significantly downregulated. miRNAs usually exert their biological functions by influencing the translation of downstream target genes. This study found that miR-181a has partially complementary sequences with PTEN at its 3 prime untranslated region. Subsequently, we performed a dual-luciferase reporter gene experiment, which also confirmed the targeting relationship between miR-181a and PTEN. Furthermore, miR-181a can negatively regulate the expression of PTEN protein. In this study, it was confirmed that the upregulation of PTEN expression in HSFb can inhibit their proliferation and induce apoptosis.

In summary, the results of this study showed that miR-181a promotes the expression of Col-1 and Col-3, and regulates the proliferation and apoptosis of HSFb by targeting PTEN, thus promoting the formation of HS. Therefore, miR-181a and PTEN could be potential therapeutic targets for HS. Although drugs that inhibit miR-181a have yet to be developed, drugs that upregulate PTEN, such as sorafenib, have been used clinically. Mutations or deletions of the PTEN gene are found in most patients with liver cancer (23), and sorafenib can upregulate the expression of PTEN through a variety of mechanisms to inhibit the occurrence of liver cancer (24). Given the regulatory effect of sorafenib on PTEN in liver cancer cells, we hypothesize that sorafenib may also upregulate the expression of PTEN in HSFb, thereby inhibiting the formation of HS. The above hypothesis will be the focus of our next research, in which we will evaluate the effects and safety of sorafenib in the treatment of HS by performing animal experiments, and explore new ways and methods for treating HS.

Reporting Checklist: The authors have completed the MDAR checklist. Available at http://dx.doi.org/10.21037/apm-21-604

Conflicts of Interest: All authors have completed the ICMJE uniform disclosure form (available at http://dx.doi.org/10.21037/apm-21-604). The authors have no conflicts of interest to declare.

Ethical Statement: The authors are accountable for all aspects of the work in ensuring that questions related to the accuracy or integrity of any part of the work are appropriately investigated and resolved. All procedures performed in this study involving human participants were in accordance with the Declaration of Helsinki (as revised in 2013). This study was approved by the Xinxiang Central Hospital (No. ZXYY-KY-0398), and written informed consent was obtained from the patients and their families.