The number of patients with end-stage renal disease has increased around the world over the past few decades (1). For these patients, regular hemodialysis is the most commonly used treatment. Hemodialysis is effective in controlling the symptoms of patients and preventing the deterioration of the disease. However, severe complications can occur during the treatment of hemodialysis in patients with end-stage renal disease (2). Vascular dysfunction is one of the more common complications after hemodialysis. It usually results from severe calcification of vascular walls during hemodialysis due to the inability of hemodialysis to filter out the phosphorus and calcium (3). According to previous studies, the most common site of vascular dysfunction is the lower limbs, especially the below-knee arteries (4,5). Critical limb ischemia is the most advanced form of vascular dysfunction. The occurrence of critical limb ischemia usually contributes to poorer prognosis and even a higher mortality of patients (6-8). There is thus an urgent need to develop effective treatment to reduce the incidence of critical limb ischemia and improve the quality of life in patients undergoing hemodialysis.

This was a retrospective, nonrandomized, and single-center study. Hemodialysis patients who were diagnosed as critical lower limb ischemia between May 2015 and October 2018 were included in this study. Patients who suffered from lower limb ischemia due to non-atherosclerotic diseases, such as embolic disease, autoimmune diseases, or trauma; those who suffered from severe psychiatric disorders; and those who had participated in other clinical trials were excluded from the study. According to the inclusion and exclusion criteria, 71 patients were finally enrolled, and their data were collected for further analysis. This study was approved by institutional ethical review board in Affiliated Hospital of Jiangnan University and conforms to the provisions of the Declaration of Helsinki (as revised in 2013). Individual consent for this retrospective analysis was waived.

Patients who had any ischemic symptoms including chills, numbness, resting pain, skin ulcer, or gangrene; who had previous diagnosis and treatment; or who had an ankle-brachial index (ABI) score of less than 0.9 or a toe-brachial index (TBI) less than 0.6, were defined as having lower limb ischemia (18). Their demographic and clinical data, including patient age, sex, duration of hemodialysis, nutritional risk (based on nutrition risk screening 2002 score ≥3), smoking history, chronic comorbidities (including diabetes, hypertension, hyperlipidemia, coronary heart disease, cerebrovascular disease, and stroke), and Fontaine classification, were the collected by two independent investigators. Additionally, several laboratory test findings were also collected, including hemoglobin, platelets, high-density lipoprotein cholesterol (HDL-C), low density lipoprotein cholesterol (LDL-C), albumin and C-reactive protein (CRP). The data collected by two investigators were verified by a third investigator, with any disagreement being resolved through discussion.

The treatment of EVT in this study was performed by several skilled cardiologists. Arterial lesions were initially detected by selective artery angiography, and then EVT was performed in arteries with more than 75% stenosis or occlusions. Successful EVT procedures were defined as those with targeted arteries with less than 25% stenosis or occlusions and a straight blood flow from the aorta down to the ulcer or gangrene in the lower limbs according to angiography. Failed EVT procedure were defined as those with targeted arteries of more than 25% stenosis or occlusions in which the blood flow remained blocked at the ulcer or gangrene. Re-evaluation would be performed using angiography if some symptoms of lower limb ischemia occurred in EVT patients during the period of follow-up, with an additional revascularization procedure potentially being required. Antiplatelet drugs were routinely used in all patients receiving EVT.

The outcomes in this study included all-cause mortality, amputation, and revascularization. Patients were followed up by outpatient clinic, telephone, or internet every 1 or 2 months, and the median period of follow-up was 19 months (interquartile range, 15–27 months). Four patients were excluded from this study due to a relatively short period of follow-up of fewer than 6 months. The treatments of revascularization included surgical bypass or second EVT in patients showing symptoms of lower limb ischemia again after the treatment after EVT.

Variables in this study included categorical variables and continuous variables. Categorical variables are reported as numbers, while continuous variables are reported as mean ± standard deviation (SD). Group differences were analyzed using chi-square tests for categorical variables or t test for continuous variables when appropriate. Kaplan-Meier analysis and log-rank test were used to assess overall survival and amputation-free survival, and to further determine the effectiveness of EVT in the treatment of critical lower limb ischemia in hemodialysis patients. Univariable and multivariable hazard Cox regression analyses were then performed to determine the predictors of amputation and mortality in included patients. Statistical analysis in this study was performed using SPSS 20.0 (IBM Corp., Armonk, NY, USA) and Kaplan-Meier plots were curved using Graphpad prism 9.0.0 (GraphPad Software, San Diego, CA, USA).

After excluding 4 patients with a short follow-up of less than 6 months, 67 patients were finally included in this study. Their demographic and clinical characteristics are listed in Table 1. The median age of included patients was 69.8±8.7 years, and 35 of them were male patients. The median duration of hemodialysis in these patients was 44.1±9.2 months. According to the Nutritional Risk Screening 2002 (NRS2002) scale, 40 patients were diagnosed with nutritional risk. The data of smoking history were also collected with 30 patients being identified as previous or current smokers. Most of included patients suffered from chronic comorbidities: 30 had diabetes, 39 had hypertension, 19 had hyperlipidemia, 29 had coronary heart disease, 9 had cerebrovascular disease, and 8 had stroke. We then defined the severity of lower limb ischemia using Fontaine classification, which revealed that 53 of 67 patients were diagnosed as stage IV. 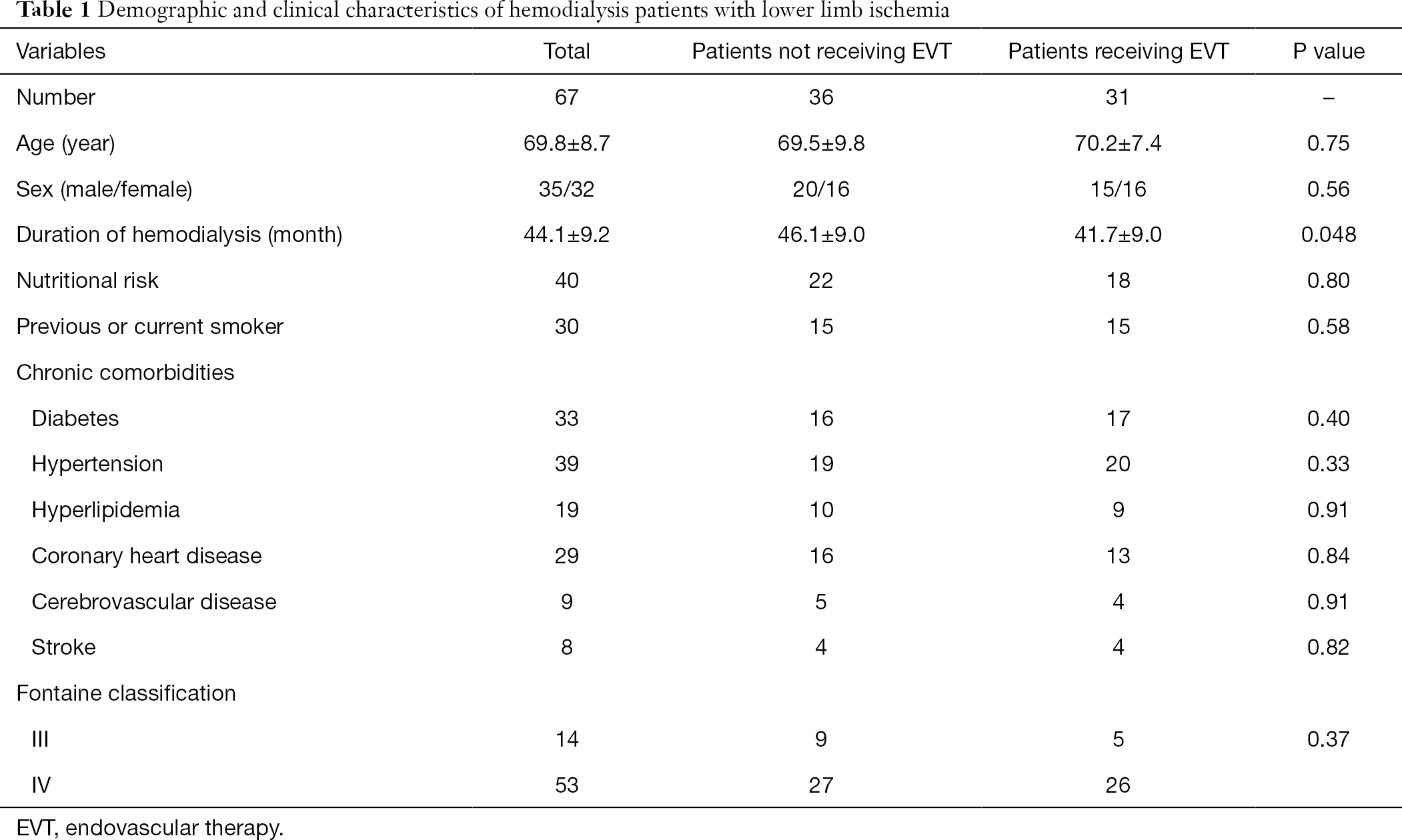 Among the 67 included hemodialysis patients, 31 patients received EVT treatment and 36 patients did not receive EVT treatment (Table 1). Patients receiving EVT had a relatively shorter duration of hemodialysis than those not receiving EVT (46.1±9.0 vs.41.7±9.0 months, P=0.048). There was no significant difference between the 2 groups in other variables. 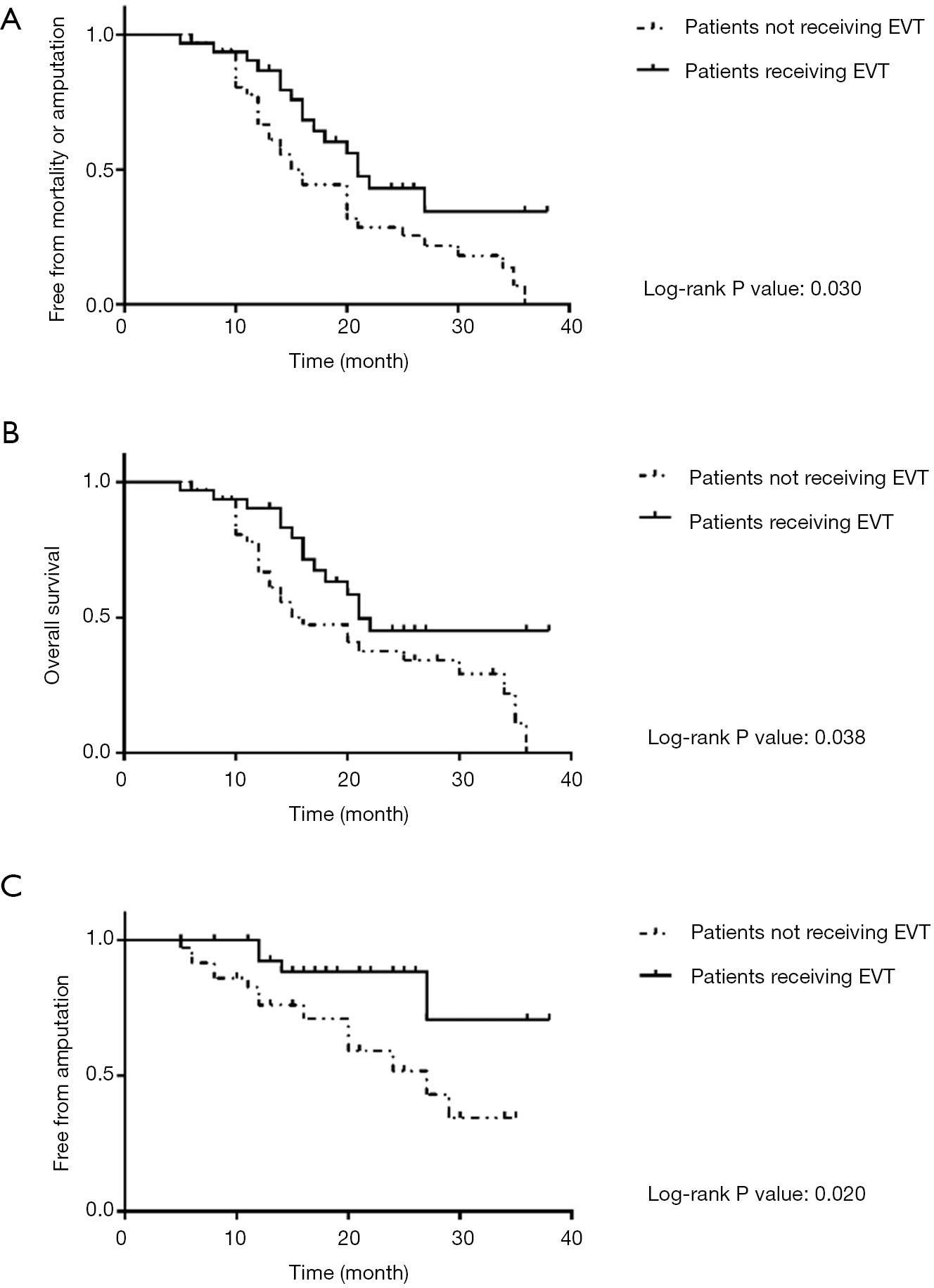 The all-cause mortality of 75% in our study was relatively higher than that reported in previous research (19,20). This may be attributable to the fact that the majority of included patients in this study were at risk of malnutrition and family nursing care was insufficient. On the other hand, the incidence of amputation was similar to that in previous studies (21,22), likely owing to adequate medication treatment and EVT.

There has been some controversy concerning surgical bypass and EVT over the past few decades. Generally, surgical bypass and EVT have been shown to have comparable effectiveness in the treatment of critical limb ischemia (11,12). However, surgical bypass is more traumatic, which has led to the increased use of EVT in recent years. Kataoka et al. also reported that the incidences of all-cause death and amputation could be acceptable in hemodialysis patients with critical limb ischemia after receiving EVT (10). The study of Suematsu et al. found that the survival of hemodialysis patients remained poor after the treatment of EVT; however, the rate of limb salvage was relatively satisfactory (23). In our study, EVT showed a good therapeutic effect on the rate of amputation in these patients, but the all-cause mortality was also high, similar to that in Suematsu et al.’s study. Some effort has been made to further improve the effectiveness of EVT in hemodialysis patients. Ohtake et al. attempted to combine EVT with low-density lipoprotein apheresis to treat critical limb ischemia (18). Their findings indicated that the cumulative rate of major adverse limb events was significantly improved in the combined group compared to the EVT group. More studies should be performed to further verify the effectiveness of low-density lipoprotein apheresis in the treatment of critical limb ischemia.

Our study further identified severable variables as risk factors of mortality and amputation. For instance, similar to a previous study (23), older age was found to contribute to a higher mortality in the included patients. Nutritional status was also shown to be related to the mortality of hemodialysis patients, with malnutrition increasing the mortality of patients. NRS2002 scale was used in this study to assess the nutritional status; other scales used in previous research have also indicated a relationship between malnutrition and mortality in hemodialysis patients (18). CRP contributed to the mortality of included patients in our study and has been identified as an important risk factor of mortality in hemodialysis patients in previous work (15,24). Moreover, smoking history was identified as independent predictor for major amputation in our study. It has been confirmed that smoking can lead to the recruitment of monocytes, induce the dysfunction of endothelial cells, and promote the development of thrombosis at damaged vessel walls (10).

Some limitations in this study should be mentioned. First, this study was performed from a single center and used a relatively small sample size. The low number of included patients hindered us from further analysis of the effects of EVT on lower limb ischemia. Also, multivariable regression analysis based on such a small sample size might have generated a degree of bias in this study. The second issue was that the treatment in patients not receiving EVT varied across each patient. Different treatments might have affected the prognosis of patients, but this study could not divide these patients into several subgroups considering the sample size of the included patients. Finally, this was a retrospective study, and retrospective data collection might have produced discrepant data. We are therefore planning to conduct a prospective study in the future.

This retrospective single-center study included 67 hemodialysis patients with critical lower limb ischemia and found EVT to be an efficacious treatment for lower limb ischemia in reducing all-cause mortality and the incidence of amputation. Furthermore, variables such as older age, nutritional risk, stroke, and high level of CRP were determined to be independent risk factors of mortality in hemodialysis patients. Longer duration of hemodialysis and smoking history also acted as risk factors of amputation in included patients.

Funding: This work was supported by the Wuxi Key Medical Talent Fund for Young People in “Strengthening Health By Science and Education” (Wuxi Health and Family Planning Commission; No. QNRC070 and 2017-2020).

Reporting Checklist: The authors have completed the STROBE reporting checklist. Available at http://dx.doi.org/10.21037/apm-21-648

Conflicts of Interest: All authors have completed the ICMJE uniform disclosure form (available at http://dx.doi.org/10.21037/apm-21-648). The authors have no conflicts of interest to declare.

Ethical Statement: The authors are accountable for all aspects of the work in ensuring that questions related to the accuracy or integrity of any part of the work are appropriately investigated and resolved. This study was approved by institutional ethical review board in Affiliated Hospital of Jiangnan University and conforms to the provisions of the Declaration of Helsinki (as revised in 2013). Individual consent for this retrospective analysis was waived.