We present the following article in accordance with the MDAR reporting checklist (available at http://dx.doi.org/10.21037/apm-21-644).

A total of 101 undergraduate students from Shanghai Institute of Physical Education and Training were selected as the test subjects. All test subjects are badminton players above three levels, according to Chinese badminton sports level rating standard. All human trials have been approved by Shanghai Institute of Physical Education and Training (No. 2017047). All procedures performed in this study involving human participants were in accordance with the Declaration of Helsinki (as revised in 2013). Informed consent was taken from all the patients.

We have consulted web of science databases related to sensitivity and ability to change direction.

The SpeedCourt test system was used to test the badminton players’ ability to change direction. The system is designed for testing and training speed, sensitivity, coordination, variable direction change, and cognition, and has the most advanced speed-sensitive training programs. It can design different testing and training programs for different sports. Reliability and validity of the system have been proofed (5). There are 3 categories related to the ability of athletes to change direction in the SpeedCourt test system, as shown in Table 1. 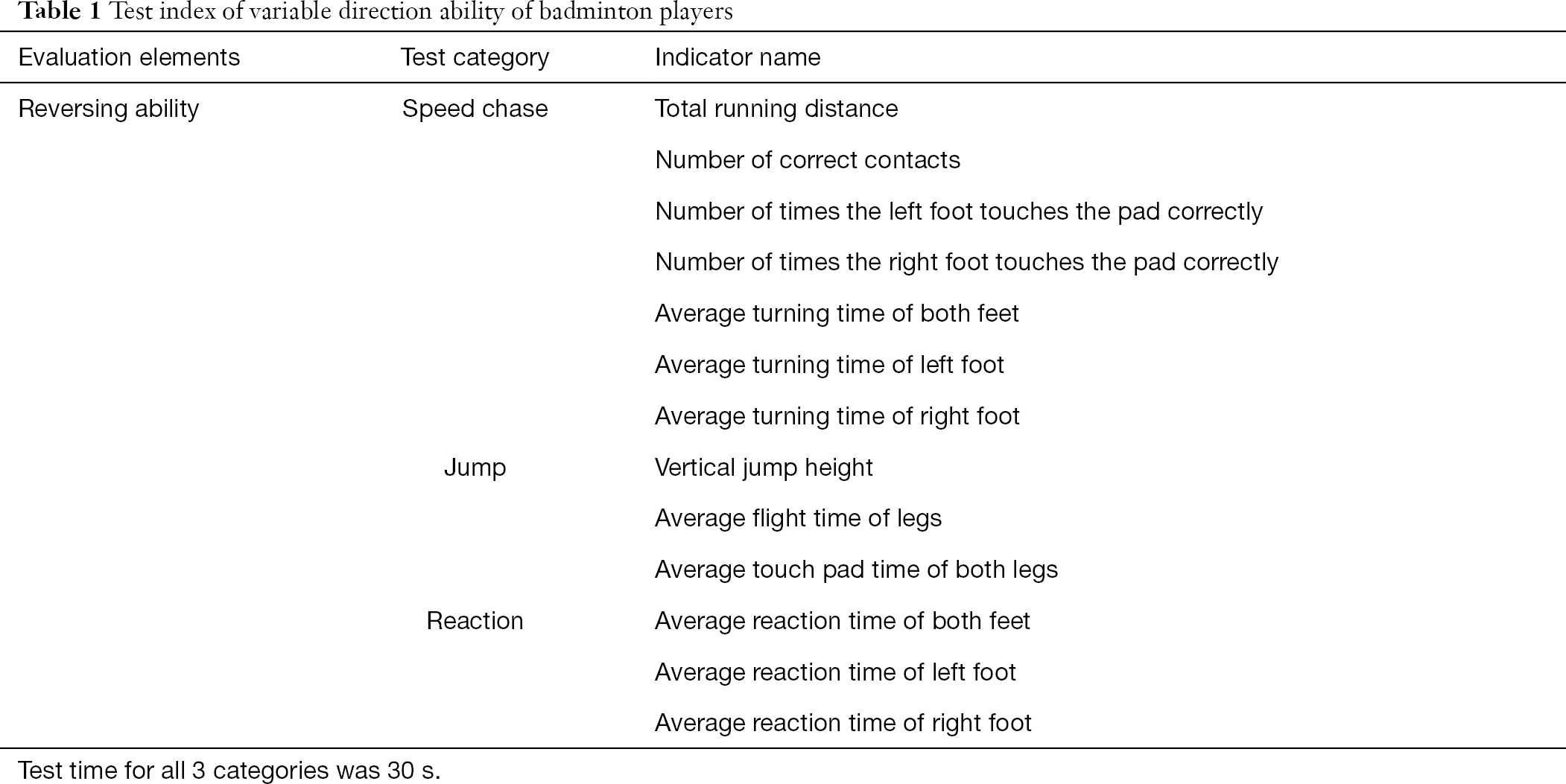 Excel was used to input SpeedCourt test data; SPSS version 25.0 (IBM, Armonk, NY, USA) was to the factor analysis of the data and calculate the factors related to badminton players’ variable direction ability; and AMOS (IBM, Armonk, NY, USA) was used to analyze the path of structure equation of badminton players’ ability to change direction, and fitting degree test was carried out with the measured data.

In Kaiser-Meyer-Olkin (KMO) Measure of Sampling Adequacy, KMO values between 0 and 1 (6). In general, a KMO value <0.5 is not suitable for factor analysis. The number KMO of this research is 0.737, indicating the existence of common factors among variables. In addition, in our sample data, the approximate χ2-value of Bartlett’s test of sphericity was 875.760, and P=0.000, so the original hypothesis can be rejected and it also indicated the existence of common factors between the correlation matrices of the overall sample; therefore, this research was suitable for factor analysis (Table 2).

Using the factor analysis, 4 main factors were found after rotation, and the cumulative contribution rate of the 4 main factors reached 78.331%, which indicated that these factors could explain 78.331% of the component factors of badminton players’ variable direction ability. Therefore, these factors can explain the badminton players’ ability to change direction (Table 3).

Because the initial factor load is complex and it is difficult to explain the rationality of the variable, it is necessary to rotate the initial factor. Initial factor is the interdependent common part of the variable after factor analysis, which represents the basic data structure of the initial variable. The initial factor can only be rotated to highlight the variables it represents. In the present study, the original factor was rotated by the quartimax method, and the factor was differentiated after rotation, which is beneficial for classifiying and explaining the factor reasonably. According to the factor analysis statistical principle, the common factor can be extracted if the characteristic value after rotation is >1 and the factor load is >0.6; therefore, 4 common factors were used in the present study. As seen in Table 4, factor 1 had a higher load on the variable distance, the number of times feet touched the pad, the number of times the left foot touched the pad, and the number of times the right foot touched pad. These 4 indexes all have an impact on the distance of the athletes running in 30 s. As the time was determined, the difference was the distance of the athletes’ movement, which was mainly caused by the difference in the speed of athletes. Therefore, factor 1 (F1) can be named as the moving speed factor. Factor 2 (F2) were higher in terms of the mean turning time of feet, the mean turning time of the left foot, and the mean turning time of the right foot, while the 3 index variables involved leg turning time. The length of leg turning time was highly correlated with the coordination of lower limbs; therefore, F2 can be named as the coordination factor. The factor loads with relatively high factor 3 include the average response time of both legs, the average response time of the right leg and the average response time of the left leg. Therefore, F3 can be named as the response ability factor. Factor 4 (F4) was closely related to the vertical jump height and the average flight time of both legs, which are both the manifestation of explosive power of legs. Athletes with stronger explosive power of legs can achieve higher vertical jump height and longer flight time (7); therefore, F4 can be named as the explosive force factor (Table 4). 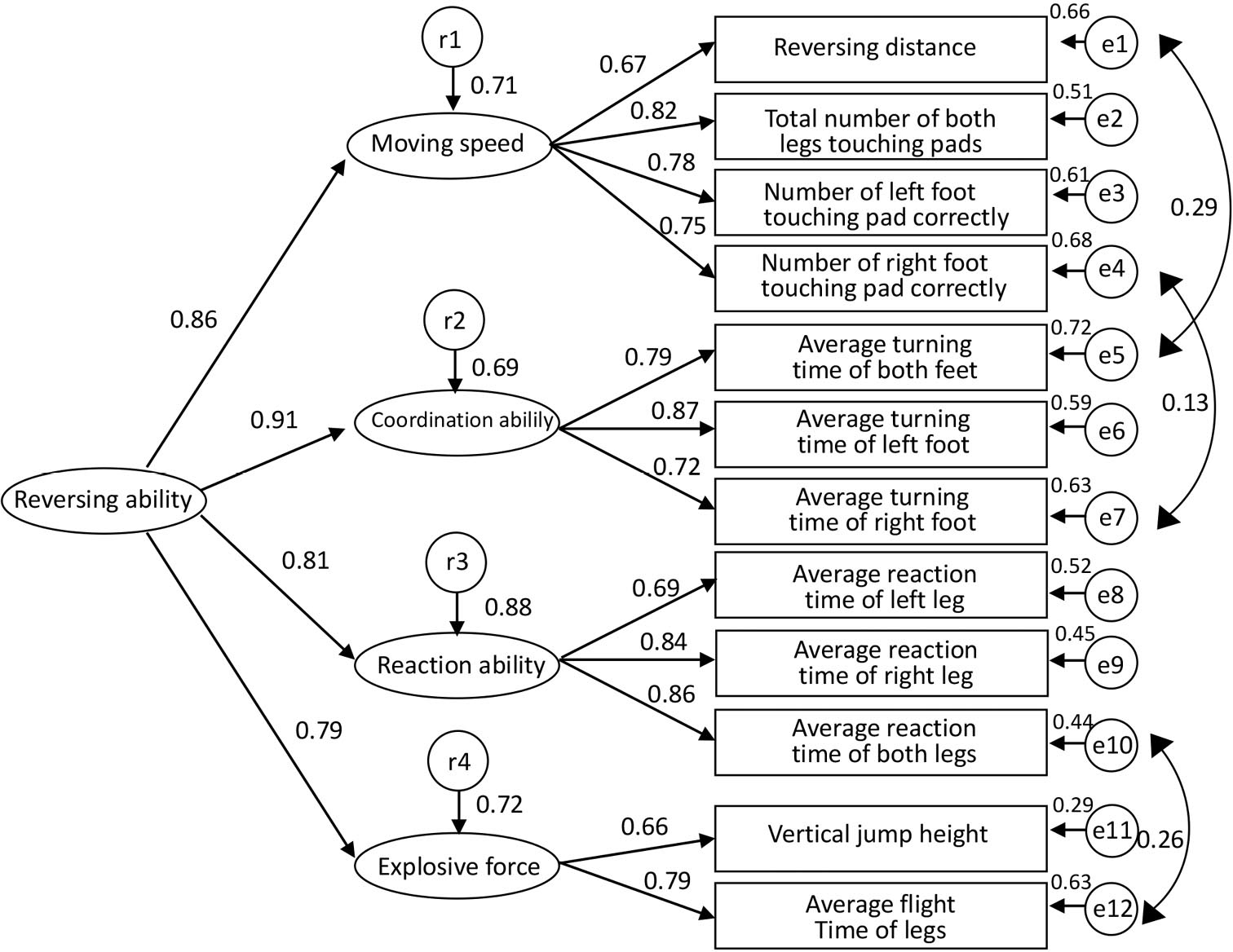 The test criteria of the overall fitness of Wu’s structural equation model were compared with the fitness values of the present study (8). As showed in Table 5, in this study, P=3.15>0.05 and χ2/df =1.239<2.00, indicating that the results were not statistically significance. The nihilistic hypothesis was accepted, and all other values of absolute fitness, value-added fitness, and parsimonious fitness met the critical criteria of fitness. The structural equation model of the sensitive quality of badminton players established in the present study was consistent and fit well with the actual data. Our model has good conceptual reliability and can be used as a reference for the training of sensitivity in badminton sports.

Mobile speed training is a necessary condition for badminton players

Moving speed is important in sport. A skillful athlete without moving speed is difficult to become an outstanding athlete. There is a lot of urgent stops in the badminton sport. Without a good moving speed, the players’ technical and tactical level can not be brought into play. In their study, Sung et al. used a tracking experiment to analyze 50 badminton players. They found that there were significant differences in the accuracy of lower limb movement speed in terms of batting; the faster the lower limb movement speed, the higher the accuracy of batting in the game (9).

Abdul Hamza et al.’s research on the relationship between the performance of badminton players in the Iraqi National Youth Team and their level of physical fitness found that the better performance as positively related to the athletes’ movement speed and explosive force of the lower limbs (10). Salah et al.’s research on influencing factors of hitting accuracy of women’s badminton players found that the most important reason for players to make mistakes in the game was that their moves did not reach the designated position. In the competition, when fatigue occurs, the moving speed of legs will be affected first, which will lead to the decrease of the balance ability of players. So, in the process of daily physical quality training, to increase the lower limb movement speed and lower limb endurance training, so that we can make up for the fatigue phenomenon lose points because the pace is not in place appear (11).

Chen found that the fast and slow conversion of badminton players will directly affect the effect of attack and defense conversion during competition, especially from slow and fast-rapid conversion. When the competition is intense, there is an increase in continuous braking and high-intensity movements, such as fast starts (12).

Effects of response ability on performance of badminton players

Reaction time refers to the time interval from stimulation to the beginning of reaction. The length of the reaction time represents the strength of the reaction, and the strength of the reaction represents the level of the athletes to a certain extent. Badminton requires a kind of instantaneous thinking mode, which requires athletes to have strong reaction ability to make judgement in a short time to cope with the unexpected situation on the field. Cao et al. found that the dynamic response time of high-level badminton players was obviously higher than that of low-level athletes, and the level of high-level badminton players in meter running and re-entry running was significantly higher than that of other high-level athletes, indicating that the response time factor is an important factor affecting the ability of badminton players to change direction (16). Mehmet’s study of the visual and auditory responses of 15 national players participating in the Inter Milan badminton tournament found that the length of the visual and auditory responses was highly correlated with the performance of the sport. The level of players with short reaction time in smashing, returning and handling the near-net ball was significantly higher than that of the players with long reaction time (17).

Athletes have a complex physical quality, the various qualities overlap, cross, mutual influence, and even antagonistic may, in the study cannot completely separate the relevant qualities, showing that you have me and I have you entangled state, the relationship between the relationship cannot simply be expressed by causality or positive and negative correlation. Therefore, in future studies, we will grasp the principal contradiction, from the system theory, based on the complex network theory, to further study badminton players’ ability to change direction.

Reporting Checklist: The authors have completed the MDAR reporting checklist. Available at http://dx.doi.org/10.21037/apm-21-644

Conflicts of Interest: Both authors have completed the ICMJE uniform disclosure form (available at http://dx.doi.org/10.21037/apm-21-644). The authors have no conflicts of interest to declare.

Ethical Statement: The authors are accountable for all aspects of the work in ensuring that questions related to the accuracy or integrity of any part of the work are appropriately investigated and resolved. All human trials have been approved by Shanghai Institute of Physical Education and Training (No. 2017047). All procedures performed in this study involving human participants were in accordance with the Declaration of Helsinki (as revised in 2013). Informed consent was taken from all the patients.