Expression and clinical significance of VCAM-1, IL-6, and IL-17A in patients with allergic rhinitis

Allergic rhinitis is a non-infectious chronic inflammatory disease of the nasal mucosa that is mediated by immunoglobulin E and triggered by a variety of cytokines after the atopic body is exposed to allergens. The main symptoms of the disease include nasal itching, nasal congestion, runny nose, sneezing, and headache, and in severe cases, hyposmia and other complicated diseases that can affect the quality of life of patients (1). The incidence of allergic rhinitis in China is currently 15–25%, and its incidence is increasing (2). With the further development of molecular biology and immunology, some scholars have found that the onset of allergic rhinitis is closely related to the immune imbalance of cell adhesion molecules and cytokines (3). Interleukin (IL)-6 is a lymphokine produced by activated T cells and fibroblasts, and has become an important biomarker for the detection of inflammation and infectious diseases. Related studies have reported that IL-6 is involved in allergies, and plays an important role in the process of occurrence and development of allergies (4). Vascular endothelial cell adhesion molecule-1 (VCAM-1) is an important cell adhesion molecule that participates in the onset of hypersensitivity reactions (5). IL-17A, a type of cytokine, plays an important role in the hematopoietic system, immune response, and inflammatory response (6). There are many studies on the relationship between allergic rhinitis and inflammatory factors. However, the relationship between indicators (such as VCAM-1 and IL-17A) and the progression of allergic rhinitis was unclear. In the present study, we aimed to explore the expression and clinical significance of VCAM-1, IL-6, and IL-17A in patients with allergic rhinitis, and provide new ideas for its clinical diagnosis and treatment. We present the following article in accordance with the MDAR checklist (available at http://dx.doi.org/10.21037/apm-21-546).

Patients with allergic rhinitis, who were admitted to our hospital from March 2017 to March 2020, were selected as the research participants of the study. The inclusion criteria were as follows: (I) patients met the diagnostic criteria in the “Guidelines for the Diagnosis and Treatment of Allergic Rhinitis”, formulated by the Chinese Medical Association Otorhinolaryngology Head and Neck Surgery Branch (7); (II) patients with clinical symptoms of different degrees of paroxysmal sneezing, clear watery mucus, nasal congestion, and nasal itching; (III) patients with complete clinical data; and (IV) patients had not taken drugs that affect VCAM-1, IL-6, and IL-17A levels, or had not received relevant treatment before being included in the study. The exclusion criteria were as follows: (I) patients with previous asthma, rhinitis, or sinusitis; (II) patients with Alzheimer’s disease; and (III) patients with poor treatment compliance.

After the study participants were admitted to the hospital, 5 mL of anterior cubital venous blood was collected routinely with coagulation reaction in a refrigerator at 4 °C for 0.5 h. After centrifugation at 1,500 × g for 15 min, the upper serum was extracted and stored in a refrigerator at –80 °C for further testing. Prior to the experiment, the frozen samples were transferred to a 4 °C refrigerator in advance to slowly thaw for 12 h, and then placed at room temperature 0.5 h before the test for temperature equilibrium. VCAM-1, IL-6, and IL-17A levels were tested using enzyme-linked immunosorbent assay kits. Every 8 samples were tested in a 96-well plate, including sample wells, blank wells, and standard wells of multiple concentration. The gradient dilution of standard solution was diluted step by step according to the detection range, keeping the liquid volume of each well consistent. The plates were covered and incubated in a 37 °C incubator for 2 h, then the liquid in the well was replaced with washing solution for 30 s. Washing steps were repeated 3 times and the plate was left to fully dry on filter paper. Substrate was then added into each well, the plate was shaken horizontally, the covered for color reaction avoiding light in a 37 °C incubator. After about 0.5 h, when colors in half of the wells with standard solution were visible to the naked eye, stop solution was added to each well and the plates were sent to the microplate reader for absorbance determination.

Comparison of the levels of VCAM-1, IL-6 and IL-17A between the three groups

Analysis of the correlative factors of inducing allergic rhinitis

Data were analyzed using SPSS version 22.0 (IBM, Armonk, NY, USA). Measurement data are presented as the mean ± standard deviation; differences between 2 groups were analyzed by t-test, while comparison among multiple groups was performed by F test. Count data was expressed as n (%), and analyzed by χ2-test. Pearson linear correlation analysis was used to analyze the correlation between VCAM-1, IL-6, and IL-17A and the severity of patients with allergic rhinitis. Logistic regression model was used to analyze the risk factors of allergic rhinitis. P<0.05 was considered to be statistically significant.

Comparison of VCAM-1, IL-6, and IL-17A levels in the different groups

VCAM-1, IL-6, and IL-17A levels in the observation group were significantly higher than those in the control group (P<0.05) (Table 1).

Table 1 Comparison of VCAM-1, IL-6, and IL-17A levels between the observation and control groups
Full table

Comparison of VCAM-1, IL-6, and IL-17A levels in patients with different severity of allergic rhinitis

The levels of VCAM-1, IL-6 and IL-17A were compared among the three groups and the results showed as follows: mild group<moderate group<severe group, and VCAM-1, IL-6, and IL-17A levels were significantly different among these groups (P<0.05) (Table 2).

The Pearson linear correlation showed the levels of VCAM-1, IL-6, and IL-17A levels in the serum were positively correlated with ARIA classification criteria (P<0.05) (Figure 1 and Table 3). 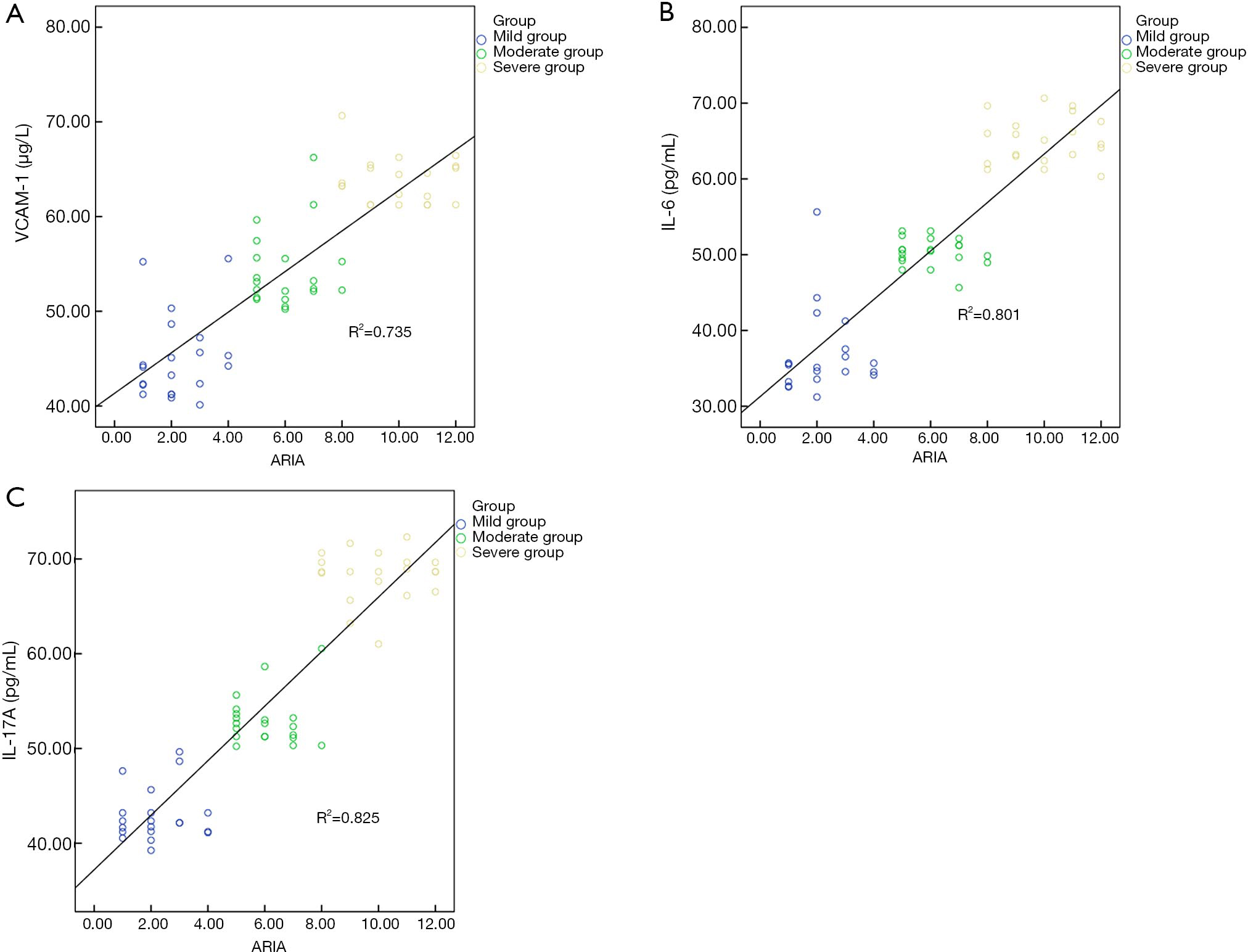 Analysis of risk factors on exacerbation of allergic rhinitis

Allergic rhinitis not only affects the nasal cavity but may also induce headaches, sleep disorders, cognitive dysfunction, and other function disorders, affecting the quality of life of patients. Some scholars believe that allergic inflammation is not limited to the site where it initially occurs, and can be secondary to non-allergic reactions throughout the body (11). A number of reports have indicated that if not treated in time, allergic rhinitis can be complicated with asthma, sinusitis, otitis media, pharyngitis, conjunctivitis, and other diseases (12-14). According to previous reports, more than 50% of asthma patients have a history of allergic rhinitis, which indicates that the early diagnosis and treatment of allergic rhinitis is of significance for preventing the progression of related diseases (15).

At present, the mechanism of local allergic inflammation leading to allergic inflammation in distant organs is not yet clear, but some researchers have found that the relationship between the VCAM system and allergic reactions is intricate. The expression level of VCAM-1 could be upregulated when induced by stimulating factors (8). It has been reported in the literature that VCAM-1 is overexpressed in patients with airway inflammatory diseases, such as allergic asthma (16). Nosulya et al. found that the expression of VCAM-1 in the lung tissues of anaphylactic shock rats increased with the progression of anaphylactic shock, indicating that VCAM-1 is a key molecular involved in allergic reactions (17). The findings of the present study indicated that the level of VCAM-1 in the observation group was significantly higher than that in the control group, which is consistent with the results reported in the previously published studies (18).

A number of researchers believe that a variety of inflammatory mediators may play important roles in the pathogenesis of allergic rhinitis (19), such as IL-17A and IL-6. As an important member of the IL-17 family, IL-17A could induce the activation of T cells, activate protein kinases, regulate the activity of kinases, play an important role in signaling pathways (such as P38–mitogen-activated protein kinase), and stimulate the release of various inflammatory factors, such as IL-6 and IL-8, thereby triggering a series of inflammatory airway response (9). IL-6 is an inflammatory factor released by monocytes and macrophages, which can directly activate vascular endothelial and inflammatory cells, induce the synthesis of acute-phase proteins, aggravate inflammatory reactions, and damage tissues and cells. Ciprandi et al. found that IL-6 can induce the release of specific allergic mediators and further aggravate allergic rhinitis with the coordination of other inflammatory factors (20).

In summary, VCAM-1, IL-6, and IL-17A play important roles in allergic rhinitis, and the concentration of the 3 indicators increase with disease progression. The findings of the present study indicate that clinical testing of VCAM-1, IL-6, IL-17A should be increased to improve the diagnostic rate for early allergic rhinitis, prevent disease progression, and improve patient prognosis. However, there are still some limitations of this study. Since the mechanism that determines the upregulation of adhesion molecules in the nasal mucosa has not yet been clarified, the in vitro effects of VCAM-1, IL-6 and IL-17A on nasal mucosa cells need to be further studied in the future

Reporting Checklist: The authors have completed the MDAR checklist. Available at http://dx.doi.org/10.21037/apm-21-546

Conflicts of Interest: All authors have completed the ICMJE uniform disclosure form (available at http://dx.doi.org/10.21037/apm-21-546). The authors have no conflicts of interest to declare.

Ethical Statement: The authors are accountable for all aspects of the work in ensuring that questions related to the accuracy or integrity of any part of the work are appropriately investigated and resolved. All procedures performed in this study involving human participants were in accordance with the Declaration of Helsinki (as revised in 2013). The informed consent was taken from all the patients. The study was approved by West China School of Public Health and West China Forth Hospital (HXSY-EC-2021023).