Cervical cancer is a common malignant tumor in women with high incidence and mortality. At present, the clinical treatment of cervical cancer mainly involves radical resection (1). However, this is sometimes complicated by pulmonary infection which not only increases patient discomfort and lengthens the hospital stay but can also easily lead to acute respiratory insufficiency, damage the function of other organs, and even lead to death (2). The timely diagnosis of pulmonary infection after laparoscopic general anesthesia for cervical cancer treatment and effective intervention is of great significance to improving the prognosis of patients. Studies have shown that (3) inflammatory factors can play a key role during the development of pulmonary infection after cervical cancer surgery, which can lead to significant changes to serological indicators. Triggering receptor expressed on myeloid cells 1 (TREM-1) is a key mediator of inflammatory responses after trauma and infection, while C-reactive protein (CRP) and procalcitonin (PCT) are also important inflammatory factors (4,5). In this study we analyzed the predictive value of the early detection of postoperative CRP, PCT, and TREM-1 for pulmonary infection after laparoscopic general anesthesia for cervical cancer treatment and aimed to provide a scientific reference for clinical treatment. We present the following article in accordance with the STARD reporting checklist (available at http://dx.doi.org/10.21037/apm-21-554).

Eighty patients who underwent radical cervical cancer surgery in our hospital from March 2018 to March 2020 were selected as research subjects. All patients agreed to participate in this study and signed an informed consent form. The study was conducted in accordance with the Declaration of Helsinki (as revised in 2013). This study was approved by the Sichuan Provincial People’s Hospital, University of Electronic Science and Technology of China (No. 20180203). The inclusion criteria were all of the following: (I) pulmonary infection based on Dilworth’s scoring criteria for a lung infection after abdominal surgery and the diagnostic criteria for hospital-acquired bronchopulmonary infection established by the Respiratory Society of the Chinese Medical Association. Specifically, this was determined on the basis that (i) the number of coughs or original coughs increased after operation; (ii) an oral temperature >38 °C which lasted more than 24 h; (iii) new invasive changes in the chest were detected; (iv) thickened and increased sputum were present; (v) the white blood cell count >11×109/L; and (vi) rales were present in the lungs. Among these criteria, item (iv) was allocated 3 points, and the other items were each allocated 1 point, and a diagnosis of pulmonary infection was established when the cumulative score was ≥4 points (6). (II) Patients who did not have serious complications. (III) Patients who met the diagnostic criteria for cervical cancer; and (IV) the clinical data of the patient was complete. The exclusion criteria were any of the following: (I) patients who received relevant treatment before enrollment; (II) patients who were complicated with severe infection symptoms; (III) patients with coagulation disorders or previous malignant tumors; and (IV) patients who failed to tolerate the treatment plan or withdrew from treatment. According to whether the patients were complicated by postoperative pulmonary infection, they were divided into an infected group (n=34) and non-infected group (n=46). The infection group comprised of 18 males and 16 females with an age range between 28 and 72 years, and an average age of 41.60±5.73 years. There were 25 males and 21 females in the uninfected group, with an age range of between 28 and 70 years, and an average age of 41.58±5.71 years. As the general information of the two groups was not statistically different, the results were comparable (P>0.05).

We collected 5 mL of fasting blood before the operation and 24 h after operation from each group. After centrifugation (3,500 r/min, 5 min, r=8 cm), the separated serum was collected and placed in a Roche E411 automatic electrochemiluminescence analyzer to detect the PCT level. The concentration of CRP and TREM-1 in the two groups was determined by the Enzyme-Linked Immune Sorbent Assay (ELISA) method (7). The reagents used in the test were provided by the Beijing Meikang Biotechnology Research Center Co., Ltd. and the measurement was carried out following the instructions of the ELISA kit.

Comparison of CRP, PCT, and TREM-1 levels between the two groups

There was no significant correlation between age, gender, BMI, or the intraoperative application of analgesic pumps, and pulmonary infection in patients after surgery. However, tumor TNM staging (III + IV), previous lung disease (yes), postoperative use of a ventilator (yes), intraoperative use of antibacterial drugs (yes), PCT (≥0.5 ng/mL), CRP (<0.8 or 8.0 mg/L), and ICAM-1 (<211.0 µg/L) were significantly correlated with pulmonary infection (P<0.05), as shown in Table 2. 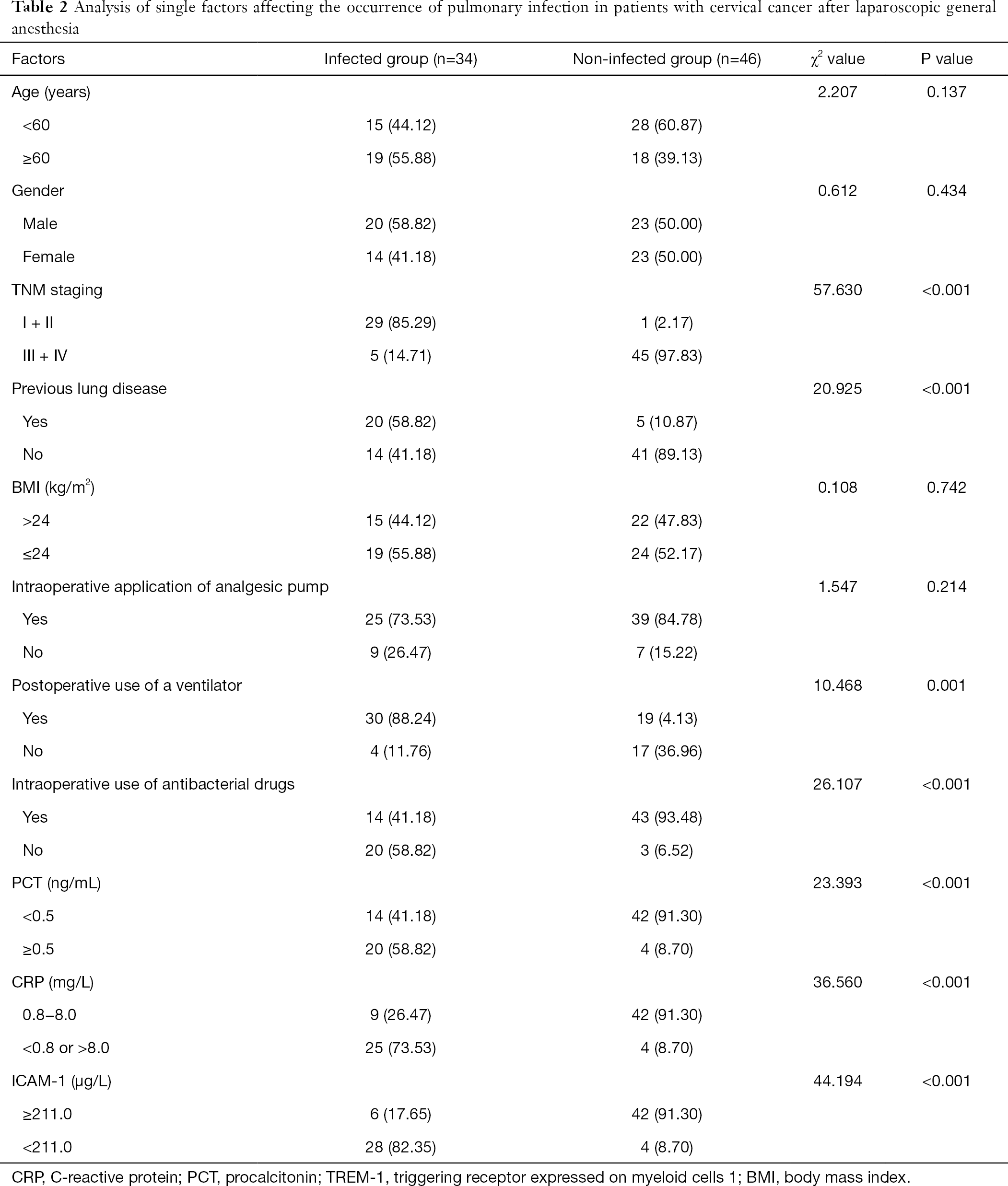 The predictive value of individual CRP, PCT, TREM-1 and their combined detection for the occurrence of pulmonary infection after laparoscopic general anesthesia for cervical cancer treatment

Table 4 The predictive value of individual CRP, PCT, TREM-1 and their combined detection for the occurrence of pulmonary infection after laparoscopic general anesthesia for cervical cancer treatment
Full table 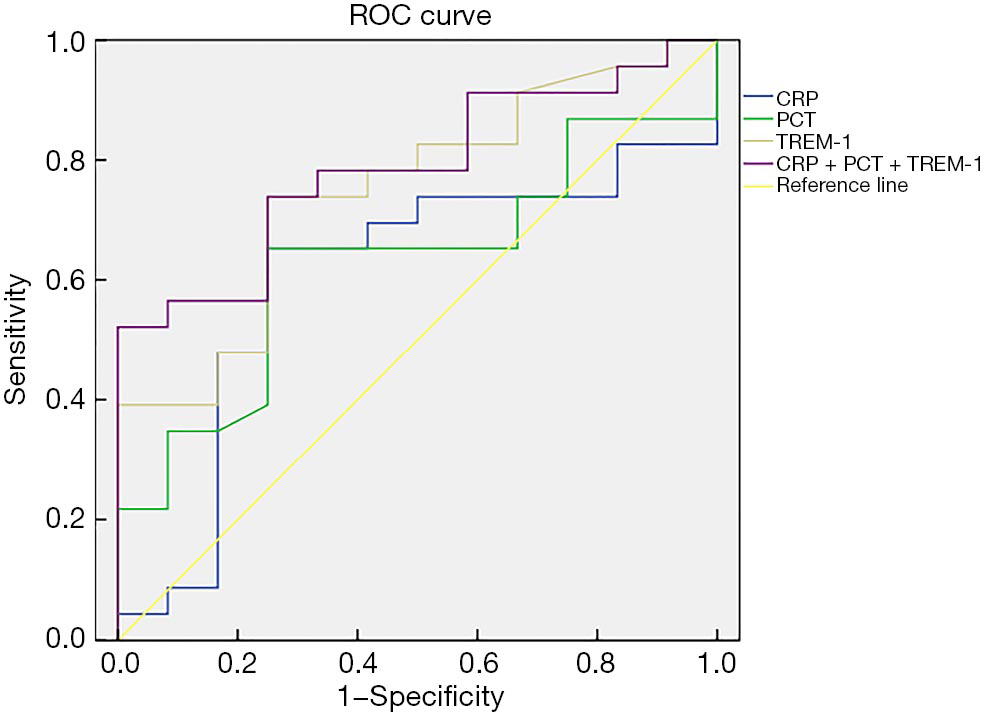 Figure 1 The ROC curve of the predictive value of individual C-reactive protein (CRP), procalcitonin (PCT) and triggering receptor expressed on myeloid cells 1 (TREM-1) and their combined detection for the occurrence of pulmonary infection after laparoscopic general anesthesia for cervical cancer treatment.

General anesthesia is a commonly used method of anesthesia for large-scale clinical operations (8). Several factors have been identified as contributing to the likelihood of post-operative infection following general anesthesia. The low immune function of patients with cervical cancer, and fluid and blood loss during laparoscopic surgery increase the likelihood of post-operative infection and invasion of multiple pathogens (9).

The likelihood of pulmonary infection may also increase when the tracheal intubation airbag is over-inflated and compresses the tracheal mucosa, resulting in ischemia which can promote lung infection (10). Restricted post-operative thoracic movement resulting from a painful incision, chest drainage tube irritation, or tight chest strap, and the general reduction in airflow velocity and cough force seen in some cancer patients can lead to difficulty discharging sputum, further increasing the probability of infection (11,12). Most patients after surgery also have a limited amount of body fluids and an increased flow of inhaled oxygen, which can easily lead to thick sputum which is difficult to cough up (13). For these reasons, the early diagnosis of pulmonary infection is both important and the focus of the current research. Studies have pointed out that the detection of serum-related inflammatory factors can significantly improve the sensitivity and specificity of diagnosis which is particularly important in cases where a typical clinical and chest imaging manifestations are present (14).

PCT is an intermediate product in the production of calcitonin, which is normally produced and secreted by C cells in the thyroid. Once the body is infected, PCT can be detected in all organs, and its serum level can be significantly increased (15). Therefore, PCT has always been used as an important indicator reflecting the severity of infectious bacterial inflammation. Furthermore, studies (16) have shown that PCT has a short half-life (approximately 25–30 h), which can quickly reflect the effect of treatment and provide effective support for the clinical assessment of patient prognosis. The results of this study show that PCT was abnormally elevated in patients with pulmonary infection after laparoscopic general anesthesia for cervical cancer treatment 24 h after surgery, and was also one of the independent risk factors affecting patients with pulmonary infection. This suggests PCT can be used as an important indicator for the early judgment and evaluation of pulmonary infection.

CRP is an acute-phase reactive protein which can rise sharply when the body is infected or damaged. In this study, CRP levels were detected in 80 patients with cervical cancer after general anesthesia. After 24 h, CRP levels were abnormally increased in patients with pulmonary infection which is consistent with the results of previous studies (17), and suggests that CRP was involved in the occurrence of the disease. One possible explanation is that the massive production and aggregation of CRP and other cytokines can cause neuronal cell damage and apoptosis of astrocytes, inducing a cascade reaction of cytokines which can promote the occurrence of pulmonary inflammation (18).

TREM-1 belongs to the TREM family. Early studies have shown that the expression of TREM-1 on the surface of neutrophils was significantly increased in conditions including bacterial peritonitis, septic shock, bacterial pneumonia, and skin damage, while there was no significant increase in inflammation seen in non-microbial infections. Studies have also proposed that changes in the level of TREM-1 in plasma may be one of the body’s self-protection mechanisms against inflammation, and the inhibition of TREM-1 may reduce the degree of inflammation (19). The results of this study show that TREM-1 was an independent risk factor for pulmonary infections, suggesting the detection of serum TREM-1 in patients can help diagnose bacterial infections and assess the prognosis of patients.

The predictive value of PCT, CRP, and TREM-1 in the early detection of pulmonary infection after laparoscopic general anesthesia for cervical cancer treatment was confirmed in this study via logistic regression. Furthermore, the results of the ROC curve showed that the highest performance was achieved in terms of AUC, sensitivity, and specificity when these three indicators were combined. This may be because when PCT, CRP, and TREM-1 are separately used to assess patient prognosis, their performance is susceptible to systemic inflammatory reactions, such as seen with tissue damage, and a synergistic effect is established when the three are combined (20).

The shortcomings of this study are that the sample size is small, the sample inclusion is restricted by region, and the time span is large. The results have certain limitations, which need to be strengthened and discussed in depth in the later period.

In summary, the level of PCT, CRP, and TREM-1 is abnormally increased in patients with pulmonary infection after laparoscopic general anesthesia for cervical cancer treatment. The combined detection of the three can be used as an effective means to predict the occurrence of pulmonary infection in the early stage and initiate timely clinical interventions to improve patient prognosis.

Reporting Checklist: The authors have completed the STARD reporting checklist. Available at http://dx.doi.org/10.21037/apm-21-554

Conflicts of Interest: All authors have completed the ICMJE uniform disclosure form (available at http://dx.doi.org/10.21037/apm-21-554). The authors have no conflicts of interest to declare.

Ethical Statement: The authors are accountable for all aspects of the work in ensuring that questions related to the accuracy or integrity of any part of the work are appropriately investigated and resolved. The study was conducted in accordance with the Declaration of Helsinki (as revised in 2013). This study was approved by the Sichuan Provincial People’s Hospital, University of Electronic Science and Technology of China (No. 20180203). All patients agreed to participate in this study and signed an informed consent form.