As a common type of arrhythmia, atrial fibrillation (AF) refers to the loss of regular and orderly atrial electrical activity, replaced by rapid and disordered waves of AF (1). Epidemiology shows that the global incidence of AF is approximately 1%, while the prevalence of AF in China is approximately 0.77%, and the incidence gradually increases with age. Non-valvular atrial fibrillation (NVAF) is a common type of AF, accounting for 65.2% of all AF patients (2), and patients with NVAF have a nearly 5 times higher risk of ischemic stroke than non-AF patients. The risk of stroke caused by AF can be reduced by effective anticoagulation therapy. At present, oral warfarin anticoagulation is the preferred treatment for AF stroke prevention, which can reduce the risk of AF thromboembolism by 62% without increasing bleeding complications (3). However, patients have poor treatment compliance, the treatment rate is not high, and the rate of reaching the standard of international normalized ratio (INR) compliance rate is also low (4). Herein, this study analyzed the goal attainment of INR in NVAF patients after anticoagulation treatment, and further explored the risk factors that affect INR goal attainment, so as to provide a reference for improving the goal attainment of INR in NVAF patients after anticoagulation treatment. We present the following article in accordance with the STARD reporting checklist (available at http://dx.doi.org/10.21037/apm-21-549).

Finally, a total of 116 patients (64 males and 52 females) with NVAF were included, aged 58–83 years, with an average age of 72.26±10.54 years. The course of disease was 1–9 years, with an average of 3.47±1.03 years. All procedures performed in this study involving human participants were in accordance with the Declaration of Helsinki (as revised in 2013). The informed consent was taken from all the patients. This study was approved by the Ethics Committee of the First Hospital of Yibin (2021-015).

The data in this study were statistically analyzed by SPSS 22.0 software (IBM, New York, USA). The measurement data were described by the mean ± standard deviation (), and comparisons between groups were performed using the t test. The count data was expressed as n (%) and analyzed by the chi-squared (χ2) test. Logistic regression was used to analyze the risk factors affecting the INR goal attainment of NVAF patients after anticoagulation treatment. The ROC curve was used to analyze the predictive value of the relevant independent risk factors for the INR goal attainment of NVAF patients. Results with P<0.05 were considered to be statistically significant.

After anticoagulation therapy, the INR values of the 116 patients with NVAF ranged from 0.79 to 3.34, with an average of 1.07±0.52. There were 42 cases with INR reaching the standard (INR value ≥0.2, the goal attainment group), and 74 patients with INR values lower than the standard (INR value <2.0, the non-goal attainment group).

Comparison of general information between the two groups 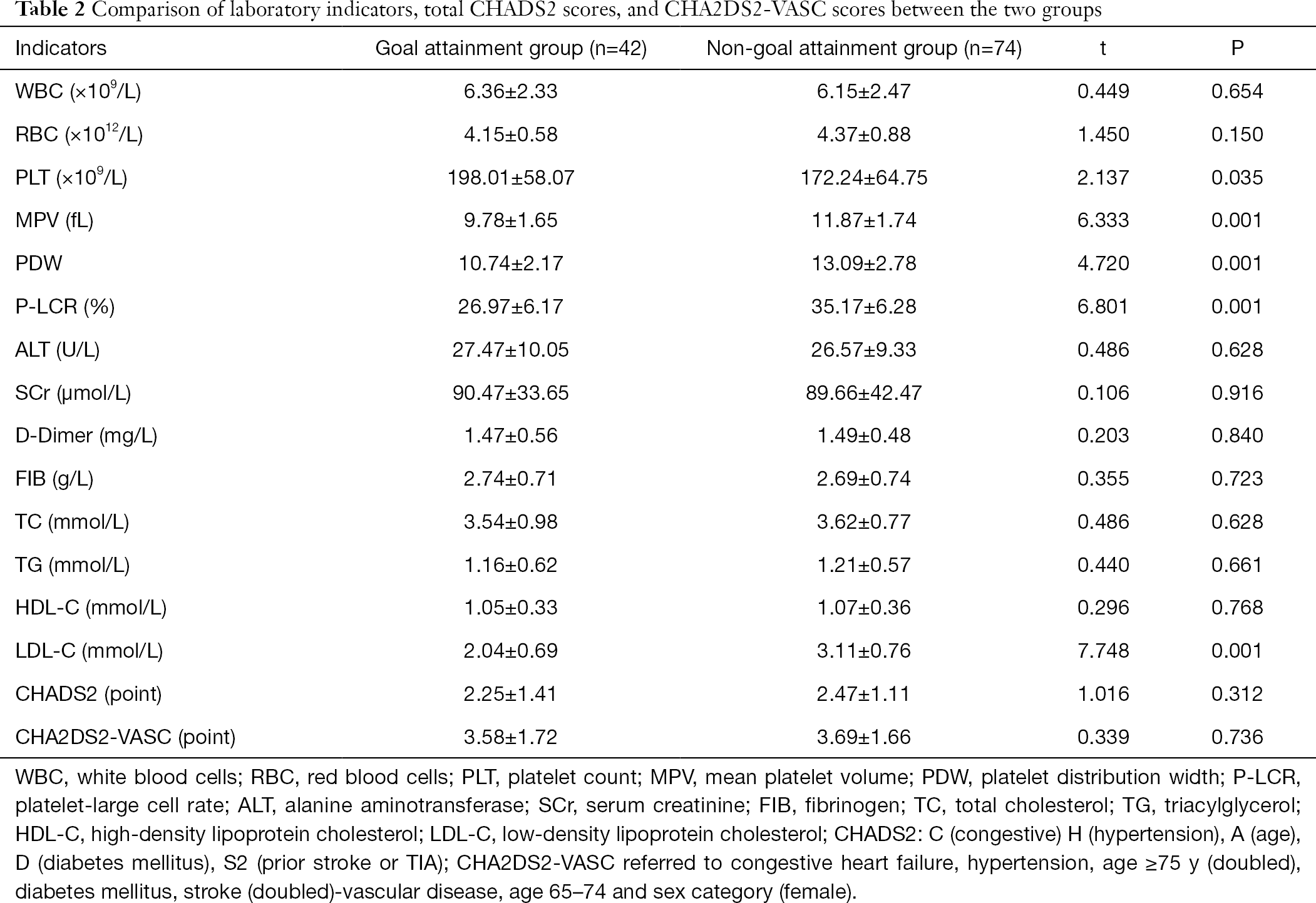 Multivariate logistic regression analysis was performed by taking whether the INR value reached the goal as the dependent variable, and taking indicators of age, PLT, MPV, PDW, P-LCR, and LDL-C as independent variables. Results demonstrated that indicators such as MPV, PDW, and P-LCR were independent risk factors of non-goal attainment of INR in patients with NVAF after anticoagulation therapy (P<0.01, Table 3).

The predictive value of MPV, PDW, and P-LCR for non-goal attainment of INR in patients with NVAF

Table 4 Predictive value of MPV, PDW, and P-LCR for non-goal attainment of INR in patients with NVAF
Full table 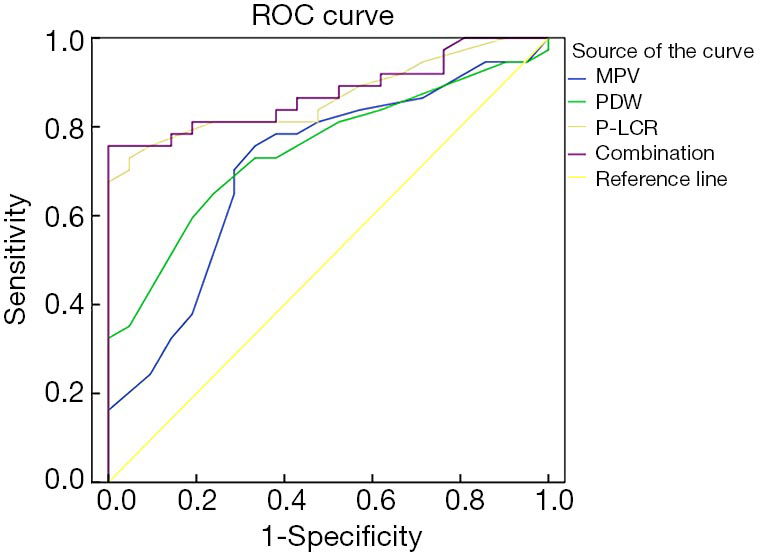 In recent years, stroke has become the main cause of death from cerebrovascular diseases in China, and the incidence of ischemic stroke in AF patients is gradually increasing. In addition, AF patients are often accompanied by enhanced coagulation activity, pre-thrombosis, and thromboembolism. Oral anticoagulant therapy with rivaroxaban, dabigatran, warfarin and other drugs and ablation of NVAF are common methods for clinical treatment of AF. Among them, anticoagulant therapy is more common, which can effectively reduce the risk of stroke in AF patients. However, due to their own factors, the anticoagulant effect is not significant in a small number of patients after oral anticoagulants (8,9). Studies have shown that warfarin treatment shows a definite effect on AF patients, and different doses and frequencies of warfarin treatment have a certain relationship with the occurrence of ischemic stroke. Warfarin has a definite effect in the treatment of patients with AF, and can reduce the incidence of stroke, mortality, and the incidence of composite endpoint events (10). Oral warfarin is of great significance in preventing cerebral infarction in AF patients (11). INR is a commonly used indicator to monitor the dose and safety of warfarin. Barrios et al. (12) pointed out that although warfarin shows a good therapeutic effect, it takes a long time to reach the ideal INR, and the maintenance time of the target range of INR is short. Ali et al.’s study on the recommended anti-thrombotic strategies after valve replacement suggested that patients with mechanical or biological valve replacement should use warfarin for anticoagulation after surgery, and the INR value should be maintained at 2.0–3.0 to reach anticoagulation standards (13). Therefore, in order to ensure the INR compliance rate of anticoagulation therapy, it is of great significance to analyze the factors that affect INR goal attainment.

This study analyzed the relationships between various clinical factors and INR goal attainment, and found that MPV, PDW, and P-LCR were independent risk factors for INR non-goal attainment after anticoagulation in AF patients. We found that patients with high MPV, PDW, and P-LCR were prone to having low rates of INR goal attainment, suggesting that in addition to strengthening anticoagulation therapy for AF patients in the future, it is necessary to focus on people with abnormalities in the above indicators, which is consistent with the report by Elvira Ruiz (14). However, a foreign study by Gue et al. (15) has shown that the age and smoking history of AF patients are risk factors that affect the non-goal attainment of INR after anticoagulation therapy. There are discrepancies with the results reported in this study, which may be related to factors such as sample size and regional population differences. MPV, PDW, and P-LCR are common platelet indexes, which can effectively reflect the function of platelets. Routine detection of platelet indexes is of great significance for the risk assessment of embolism in AF patients (16). Because large platelets are more easily activated than normal-sized platelets, MPV can reflect platelet function indirectly, as MPV is related to platelet size. Research from Seiffge et al. (17) shows that the MPV level of AF patients is negatively correlated with coronary blood flow velocity. The higher the MPV level, the higher the risk of acute coronary events. Studies abroad have also shown that elevated MPV level is associated with blood stasis in the left atrium of AF patients. Furthermore, MPV, and especially PDW, are important markers of platelet activation, and the combination of the 2 indexes is of great value for judging whether the blood is hypercoagulable (18). Platelet indexes such as MPV, PDW, and PCT reflect the functional status of the body’s coagulation system, and is closely related to thrombosis.

In order to further analyze the value of MPV, PDW, and P-LCR for predicting whether the INR meets the standard, an ROC curve was used in this study. ROC curves are widely used in the performance evaluation of medical diagnostic tests, which can obtain multiple pairs of true positive rates (TPR) and false positive rates (FPR) by changing the diagnostic boundary. The curve is drawn with FPR as the abscissa, and with TPR as the ordinate (19,20). The diagnostic value of the diagnostic test is reflected by calculating and comparing the AUC. The results of this study showed that the sensitivity and specificity of MPV, PDW, and P-LCR for predicting whether INR meets the standard were high, and the combined detection of the three indicators showed even higher sensitivity and specificity, with a greater value of AUC. These results indicated that monitoring the platelet function of AF patients is of great significance for assessing whether anticoagulation meets the goal and adjusting the dose of anticoagulant drugs. However, since this study is a single-center study and the sample size of included cases is limited, the conclusion of this study needs to be confirmed by further studies with a large sample size across multiple centers. In addition, due to the fact that this study was a single-center study with a limited number of enrolled patients, subsequent studies with a large sample size and multiple centers are still needed to confirm the conclusion of this work

In summary, MPV, PDW, and P-LCR are important factors that affect whether the INR reaches the standard after anticoagulation treatment in NVAF patients. For patients with risk factors, a reasonable and individualized anticoagulant drug regimen can be made clinically based on the detection of the above index levels.

Reporting Checklist: The authors have completed the STARD reporting checklist. Available at http://dx.doi.org/10.21037/apm-21-549

Conflicts of Interest: All authors have completed the ICMJE uniform disclosure form (available at http://dx.doi.org/10.21037/apm-21-549). The authors have no conflicts of interest to declare.

Ethical Statement: The authors are accountable for all aspects of the work in ensuring that questions related to the accuracy or integrity of any part of the work are appropriately investigated and resolved. All procedures performed in this study involving human participants were in accordance with the Declaration of Helsinki (as revised in 2013). The informed consent was taken from all the patients. This study was approved by the Ethics Committee of the First Hospital of Yibin (2021-015).