Global lung cancer incidence and mortality remain high, although they can be effectively reduced by tobacco smoking cessation (1). Non-small cell lung cancer (NSCLC) is the most prevalent lung cancer type, making up 85% of lung cancer cases (2). Squamous cell carcinoma (SCC) and adenocarcinoma (ADE) are the main histological subtypes of NSCLC. Locally advanced (LA)-NSCLC refers to clinical stage IIIA or IIIB NSCLC, and is mainly treated using concurrent chemoradiotherapy (CCRT) (3); however, this strategy is limited by radiation pneumonitis (RP), which is an inevitable dose-limiting adverse effect of LA-NSCLC radiotherapy. Therefore, to treat LA-NSCLC effectively and safely, an accurate method of predicting RP is needed.

Radiation pneumonitis (RP) is a part of radiation-induced lung injury. Its injury and repair is a complex pathophysiological process involving and interacting with many cells and cytokines. Early diagnosis and treatment can reduce lung injury and protect lung function. Past studies have correlated RP risk with various patients’ characteristics, including age, sex, smoking history, genetic predisposition, tumor location, low Karnofsky performance status (KPS), and pre-existing lung disease (4,5). Dosimetric parameters have also been associated with RP, especially mean lung dose (MLD) and V20, which are widely accepted as RP risk factors. However, despite a strong association with RP, these findings have been inconsistent due to small sample sizes and different statistical methods that limit the discriminative ability of such risk factors (6-8). Various parameters have been tentatively combined to predict RP, but their predictive value is often lost (9).

We previously reported pulmonary emphysema (PE), a chronic obstructive pulmonary disease (COPD) subtype, as a risk factor in patients with LA-NSCLC after radiotherapy, especially those with SCC (10). Pre-existing radiological interstitial lung abnormalities (ILAs) are clinical risk factors for severe RP in patients with small cell lung cancer (11). RP tends to be more common in patients with subclinical interstitial lung disease (sILD), which includes undiagnosed patients who have ILA, as revealed by chest computed tomography (CT) scans (12,13). Current RP models do not adequately consider sILD and PE in patients treated with conventionally fractionated radiotherapy. In the present study, we extend our earlier data by combining it with additional patient characteristics and dosimetric parameters in a new model for predicting RP in LA-NSCLC. In the present retrospective study, age, PE, and sILD at baseline CT were independently and significantly associated with RP incidence in LA-NSCLC patients with SCC. We combine these three factors to establish a prediction model which is more effective and simpler than the single-factor model. We present the following article in accordance with the STARD reporting checklist (available at http://dx.doi.org/10.21037/apm-21-459).

The present study was approved by the ethical review committee of Shanghai pulmonary hospital, Tongji University School of Medicine, China. A total of 153 patients treated with radical radiotherapy at our institution from January 2014 to January 2015 were recruited into the study. The patient inclusion criteria were as follows: (I) KPS score >70 with no apparent pulmonary atelectasis; (II) could endure the total dose of 58–66 Gy with common fractionation (1.8–2.0 Gy/fraction/day); (III) received radiotherapy concurrently with chemotherapy; (IV) were followed up for <6 months without apparent local-regional recurrence; and (V) had lung imaging features evaluated before and after radiotherapy. Observation indicators included general patient information (sex, age, smoking history, tumor location), lung function test indicators (forced expiratory volume in 1 s, forced vital capacity, blood gas analysis), CT image examination (PE, sILD), and DVH (Dose volume histogram) parameters. Eligible participants had stage IIIA or IIIB NSCLC and were undergoing definitive radiotherapy without the option for surgery. All procedures performed in this study involving human participants were in accordance with the Declaration of Helsinki (as revised in 2013). Individual consent for this retrospective analysis was waived.

Patients received CT planning scans during quiet breathing while immobilized in a supine position with arms raised above their heads. The designed and normalized radiotherapy plans were based on 5-mm thickness and 5-mm interval CT scans obtained at the treatment location using an ADAC Pinnacle (Philips Medical Systems, Royal Philips of the Netherlands, Amsterdam, The Netherlands) treatment planning system. Treatments were delivered by linear accelerators with 6 MV photons using 3D-conformal radiation therapy, or intensity modulated radiation therapy. Gross tumor volume (GTV) was contoured in sequential axial CT images, and included the primary tumor and metastatic lymph node drainage area. Clinical target volume (CTV) was an increase of 0.5–1.0 cm on the GTV edge and included selective regional lymph nodes. Planning target volume (PTV) was generated by adding a 5-mm axial plane margin and a 10-mm margin, in the longitudinal direction, to the CTV. The total dose covered 95% of the PTV. MLD and volumes of the lung receiving a minimum of 5, 10, 20, and 30 Gy (V5, V10, V20, and V30, respectively) were extracted based on the physical dose. The median total dose was 60 Gy (range, 58–66 Gy). The fraction dose was 1.8–2.5 Gy (median: 2.0 Gy).

sILD and PE evaluation based on CT

The sILD evaluation was based on high-resolution CT scans (14). CT results were evaluated by 2 chest radiologists as follows: no ILD=grade 0, equivocal for ILD=grade 1, suspicious for ILD=grade 2, and ILD=grade 3 (Figure 1). Equivocal for ILD is indicated by focal or unilateral ground-glass attenuation, focal or unilateral reticulation, and patchy ground-glass abnormality occupying <5% of the lung zone. Suspicious for ILD refers to non-dependent ground-glass abnormality affecting >5% of any lung zone. ILD refers to multilobe bilateral fibrosis associated with subpleural honeycomb and traction bronchiectasis.

RP grading followed Common Terminology Criteria for Adverse Events, version 4, guidelines. Patients whose adverse events information was unavailable were excluded from the analysis. RP diagnosis and grading have been described previously. The endpoint for this analysis was grade ≥2 RP or symptomatic pulmonary fibrosis.

Patients were followed-up weekly for up to 6 months, and after that, every 1–3 months. Follow-up was for at least 1 year. CT scans was performed at each follow-up.

Incidence of RP, sILD, and PE

The univariate analysis indicated that age, PE, and sILD were correlated with grade ≥2 RP (Table 2). To assess if these factors are consistent in various pathological types, we carried out the analysis in different pathologies. The results showed that sILD was significantly correlated with grade ≥2 RP for patients with ADE. In SCC patients, age, PE, sILD, arterial partial oxygen pressure (PO2), and MLD exhibited a similar correlation. Results from the SCC patient analysis were similar to those of the total sample analysis. Therefore, we performed multivariate analysis in SCC patients, which showed that age >68 years, PE grade >1, and sILD grade ≥1 on CT baseline were significantly correlated with grade ≥2 RP (Table 3). Because beta coefficients for each significant variable could predict the incidence of grade ≥2 RP, we matched corresponding scores by beta coefficient. Eventually, a new model, the predictive risk score (PRS), was developed for LA-NSCLC using the following formula: PRS=5 (if subclinical ILD grade ≥1) + 3 (if age >68 years) + 3 (if PE grade >1). The scoring system was based on Washko et al.’s and Satoh et al.’s studies (16,17). Next, we put this scoring system into practical application in LA-NSCLC patients with SCC. The calculated PRS of all 93 SCC patients ranged from 0 to 11 (median: 0). The cumulative incidence of grade ≥2 RP was 8.8% (5 patients), 13% (3 patients), and 84.6% (13 patients) when the PRS was 0, 3–5, and 6–11, respectively (P<0.001) (Figure 2). ROC curve analysis results revealed that combining age, PE, and sILD was superior to PE or sILD alone (area under the curve =0.814 vs. 0.762 vs. 0.682) (Figure 3). 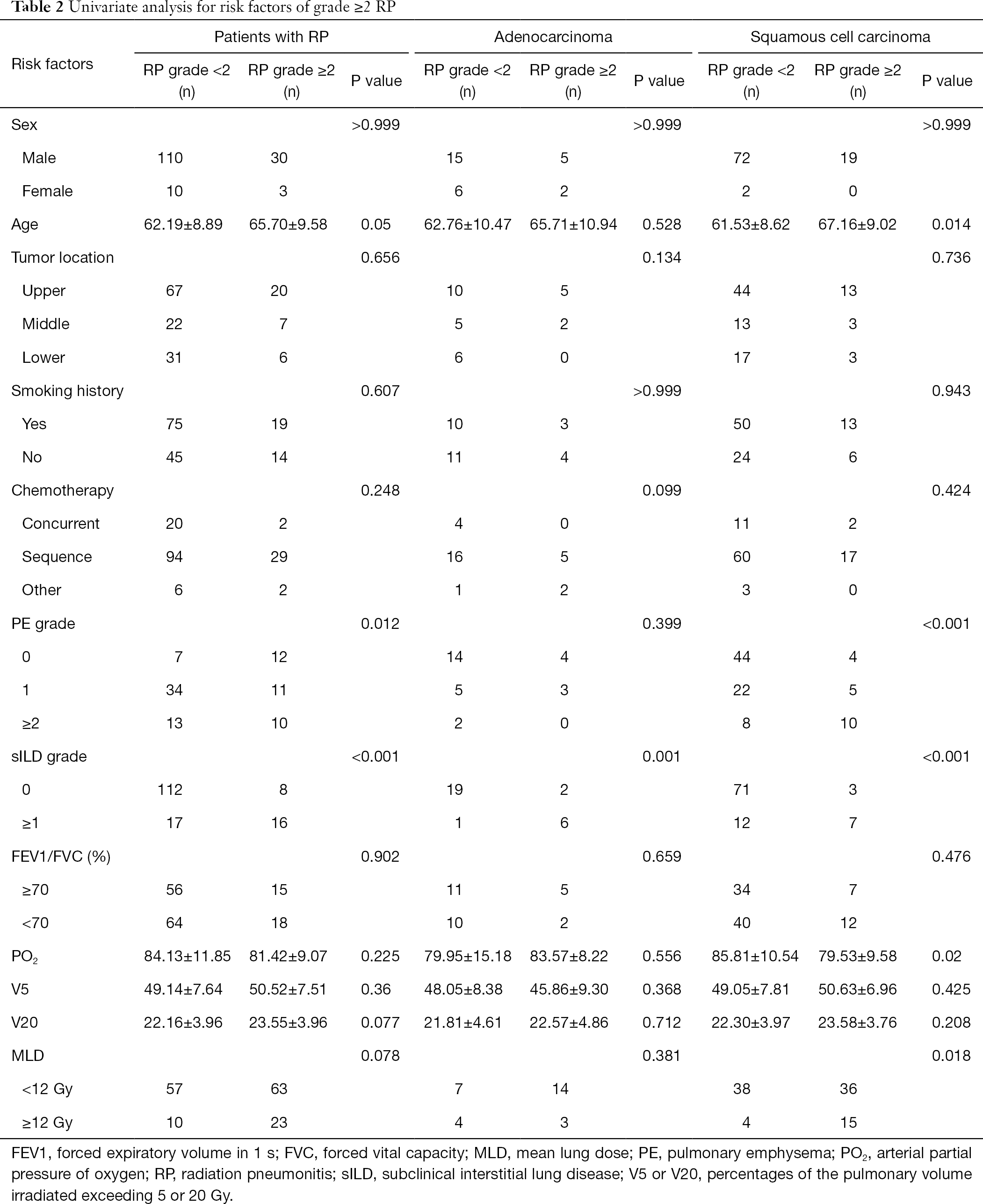 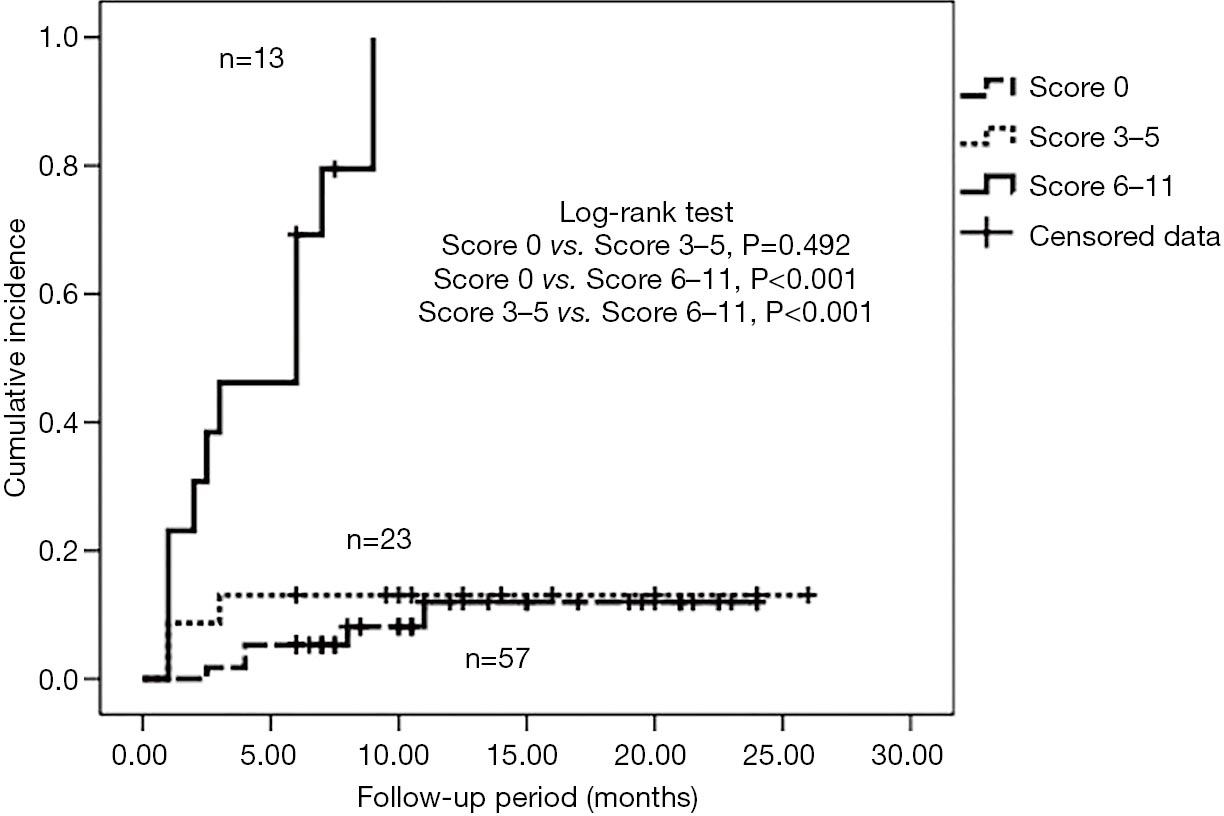 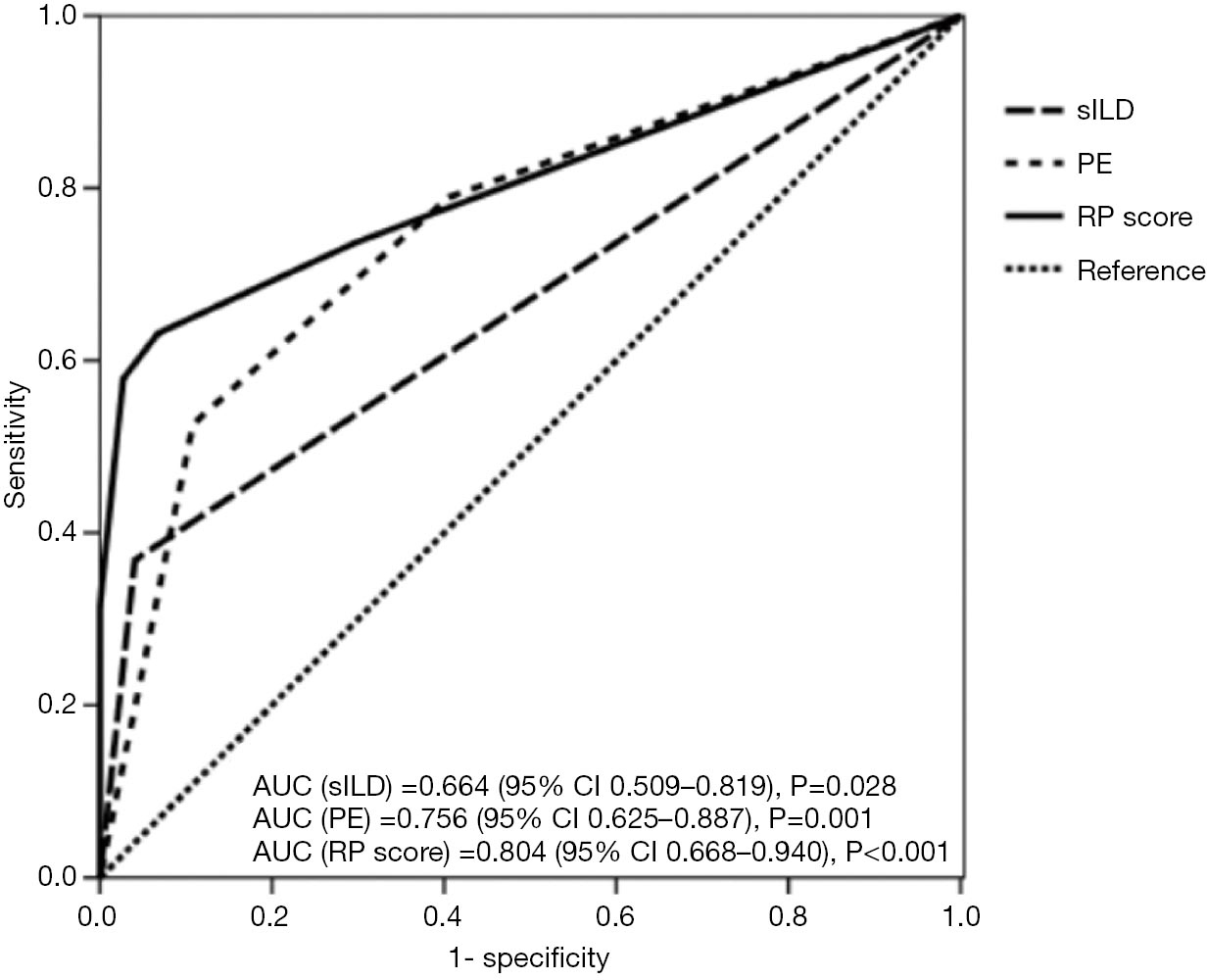 RP is an inevitable outcome that affects treatment effectiveness during and after lung cancer radiotherapy. Past studies have shown that RP incidence is correlated with dosimetric parameters and clinical factors (18). In the present study, PO2, age, sILD, PE, and MLD were found to be the most significant predictors of grade ≥2 RP. Our results are consistent with past reports on the use of dosimetric parameters (MLD, V20 and V5) to predict RP incidence. We performed a stratified analysis of various LA-NSCLC subtypes and found the results from SCC patients to be consistent with overall findings. However, few significant results were detected in ADE patients. Our analysis also indicated that PE, sILD, and age were correlated with RP incidence in SCC patients, and that patients with age >68 years, PE grade >1, and sILD grade ≥1 on baseline CT may be more prone to RP. Our data showed that a model combining sILD, age, and PE accurately predicts RP. To our knowledge, the present study is the first to combine these factors.

We previously reported PE as an effective RP predictor in SCC patients, which is consistent with other studies (19). This could be because PE, a COPD subtype, can increase the possibility of DNA damage, causing RP. As known, SCC is a major type of lung cancer and can block the main trachea, reducing lung function, which may generate reactive oxygen species. However, some studies have indicated that PE is related to RP (20, 21). A novel finding in the present study as that sILD, a pre-existing interstitial change, may increase the risk of severe RP (grade ≥2) in LA-NSCLC patients. To the best of our knowledge, few studies have evaluated the relationship between thoracic radiotherapy and sILD in patients. Ueki et al. found that pre-existing ILD was a significant risk factor for grade ≥2 RP (22). Okubo et al. found that, before SBRT, sILD is associated with grades 2–5 RP, which occurred in 45% (5/11) of their cases (23). Sanuki et al. reported that 3–26% of patients with pre-existing interstitial changes before radiotherapy developed severe RP (24). These reports suggest that sILD may increase the risk of severe RP and are consistent with our findings. However, thoracic radiotherapy may cause lymphocyte-mediated hypersensitivity reactions, which might exacerbate acute sILD (25). Therefore, accurately targeting the radiotherapy area and an accurate evaluation of subclinical ILD prior to radiotherapy are essential.

Advanced age is frequently associated with RP. Dang et al. conducted a multivariate analysis of 369 patients aged >65 years and found that more advanced age was a risk factor for grades 2 and 3 RP, which was consistent with our conclusion (26). This may due to the poor physical condition of older patients and increased comorbidities.

The present study has some limitations. As it was retrospective study, selection bias was possible. Additionally, our model lacked dosimetric parameters and various biological markers, which are known to predict RP. Furthermore, our risk score has not been validated using an independent dataset. To overcome these limitations, larger studies are needed.

In the present retrospective study, age, PE, and sILD at baseline CT were independently and significantly associated with RP incidence in LA-NSCLC patients with SCC. By combining these three factors, an efficient and simple prediction model, which may be superior to single-factor models, was developed.

Funding: The work was funded by the Key Program of Science and Technology of Guangxi, China (Grant No. AB20159024) and General projects of Guangxi Natural Science Foundation (Grant No. 2018GXNSFAA281057).

Reporting Checklist: The authors have completed the STARD reporting checklist. Available at http://dx.doi.org/10.21037/apm-21-459

Conflicts of Interest: All authors have completed the ICMJE uniform disclosure form (available at http://dx.doi.org/10.21037/apm-21-459). The authors have no conflicts of interest to declare.

Ethical Statement: The authors are accountable for all aspects of the work in ensuring that questions related to the accuracy or integrity of any part of the work are appropriately investigated and resolved. All procedures performed in this study involving human participants were in accordance with the Declaration of Helsinki (as revised in 2013). The present study was approved by the ethical review committee of Shanghai Pulmonary Hospital, Tongji University School of Medicine, China. Individual consent for this retrospective analysis was waived.