Lung cancer has one of the highest incidences and mortality rates of all malignancies in the world (1). Surgical anatomic resection of lung lesions plus systematic lymph node dissections are important methods for the treatment of lung cancer. In the past 30 years, advances in video-assisted thoracoscopic surgery (VATS) for lung cancer treatment has resulted in surgery that is minimally invasive, with reduced postoperative pain and other discomfort. This, in turn, has helped to improve postoperative recovery for the patient and reduced the cost of medical resources (2,3).

However, many patients have an underlying lung condition. Approximately two-thirds of men and half of women present with chronic obstructive pulmonary disease (COPD) at the time of lung cancer diagnosis (4). Consequently, some patients have poor cardiopulmonary endurance and cannot tolerate surgical anesthesia, resulting in prolonged waiting times for VATS. Conversely, patients who undergo VATS can still experience pain, increased airway secretions, and decreased respiratory efficiency (5-7). Patients with severe diseases may suffer from atelectasis, pulmonary infection, and other postoperative pulmonary complications (PPCs). In fact, the incidence of PPCs ranges from 2% to 40% (8,9), and the risk of PPCs increases significantly in elderly patients, and patients with a history of smoking, low cardiopulmonary function, and pulmonary disease. PPCs is one of the main contributors to reduced quality of life. It also prolongs the length of hospital stays and even affects postoperative survival after pneumonectomy. Accordingly, it is closely related to the mortality rate and medical expenses (10-13).

Therefore, improving preoperative lung function and preventing and controlling the occurrence of PPCs plays an important role in the surgical outcomes and postoperative rehabilitation of patients with VATS lung cancer resection. Perioperative pulmonary rehabilitation training (PPRT) is a comprehensive intervention measure to give individualized treatment under the condition of fully evaluating patients. Such treatment, which mainly includes exercise intervention, behavior intervention, and health education. Its purpose is to improve the physiological and psychological state of patients with chronic lung disease through a variety of personalized interventions, so as to promote the maintenance of healthy behaviors. As a non-drug-assisted treatment method, PPRT has been increasingly applied in clinical practice because it can improve lung function in patients to a certain extent, effectively reducing postoperative complications (14). There was a similar report includes a total of 208 chronic obstructive pulmonary disease (COPD) patients participated in a PPRT program, and their report shows that improvements in exercise capacity and quality of life were seen following PPRT both before and after thoracic surgery (15).

PPRT speeds up hospitalization turnover, and thus reduces hospitalization costs. However, there is still a lack of large-sample clinical data to support its application. This study retrospectively analyzed the data of 1,427 patients in a single center to evaluate the benefits of PPRT in improving patient outcomes and finally reducing the cost of medical resources in patients undergoing thoracoscopic lung cancer resection.

We present the following article in accordance with the STROBE reporting checklist (available at http://dx.doi.org/10.21037/apm-21-478).

The inclusion criteria were as follows: (I) pathological diagnosis of lung cancer; (II) thoracoscopic surgery (including conversion to open surgery); and (III) complete clinical information available. The exclusion criteria were as follows: (I) open surgery; (II) pneumonectomy; (III) reoperation; (IV) serious postoperative complications; and (V) admission to the intensive care unit. According to the inclusion and exclusion criteria, a total of 1,427 cases were included in this retrospective study, with 779 patients who underwent perioperative pulmonary rehabilitation training (the PPRT group), and 648 patients who did not receive perioperative pulmonary rehabilitation training (the non-PPRT group).

All procedures performed in this study involving human participants were in accordance with the Declaration of Helsinki (as revised in 2013). This study was approved by the ethics committee of Enze Hospital of the Taizhou Enze Medical Center (group) in Zhejiang province, China. As this was a retrospective study, informed consent was not required.

The preoperative and postoperative training programs are listed below. The details for each specific operation are provided in Appendix 1.

The length of stay in hospital, non-surgical expenses, and PPCs were also analyzed. The length of stay in hospital included total hospitalization days (THD) and postoperative hospitalization days (PHD). Non-surgical expenses during hospitalization are defined as total hospitalization expenses minus surgical expenses. Details of PPCs were collated using the electronic medical records system. Pulmonary infection is a PPC and is defined according to the following criteria: (I) chest computed tomography (CT) or chest film showing pulmonary exudation and consolidation; (II) fever above 38 °C; (III) white blood cell (WBC) count >10,000 or <3,000/mm3; and (IV) pathogenic bacteria or purulent secretion in the sputum or bronchoscopy. Other PPCs included atelectasis of the lung lobe or whole lung as confirmed by chest CT or chest film; postoperative pneumothorax as indicated by chest CT or chest film greater than 30%; and postoperative pleural effusion defined as pleural effusion greater than that indicated by the chest CT or chest X-ray.

Statistical analysis was performed using the SPSS 25.0 software. For continuous variables, descriptive statistics were used to calculate the number of observations (n), mean/median, minimum and maximum, and the 95% confidence interval (CI) of variables. A t-test or non-parameter test (Wilcoxon) was used for comparison between the two groups. For discontinuous variables (classified variables), the number and frequency (percentage) of occurrence of each category was calculated by descriptive statistics, and the comparison between the two groups was conducted by Pearson chi square test or Fisher’s exact test. P<0.05 was considered statistically significant.

A comparison of baseline patient characteristics

There was no significant difference between the two groups in terms of age, gender distribution, tumor location, operation mode, pathological diagnosis, tumor stage, and other baseline characteristics (P>0.05). The rehabilitation group had more complications and a higher CCI index score compared to the non-rehabilitation group (P<0.05) (Table 1). 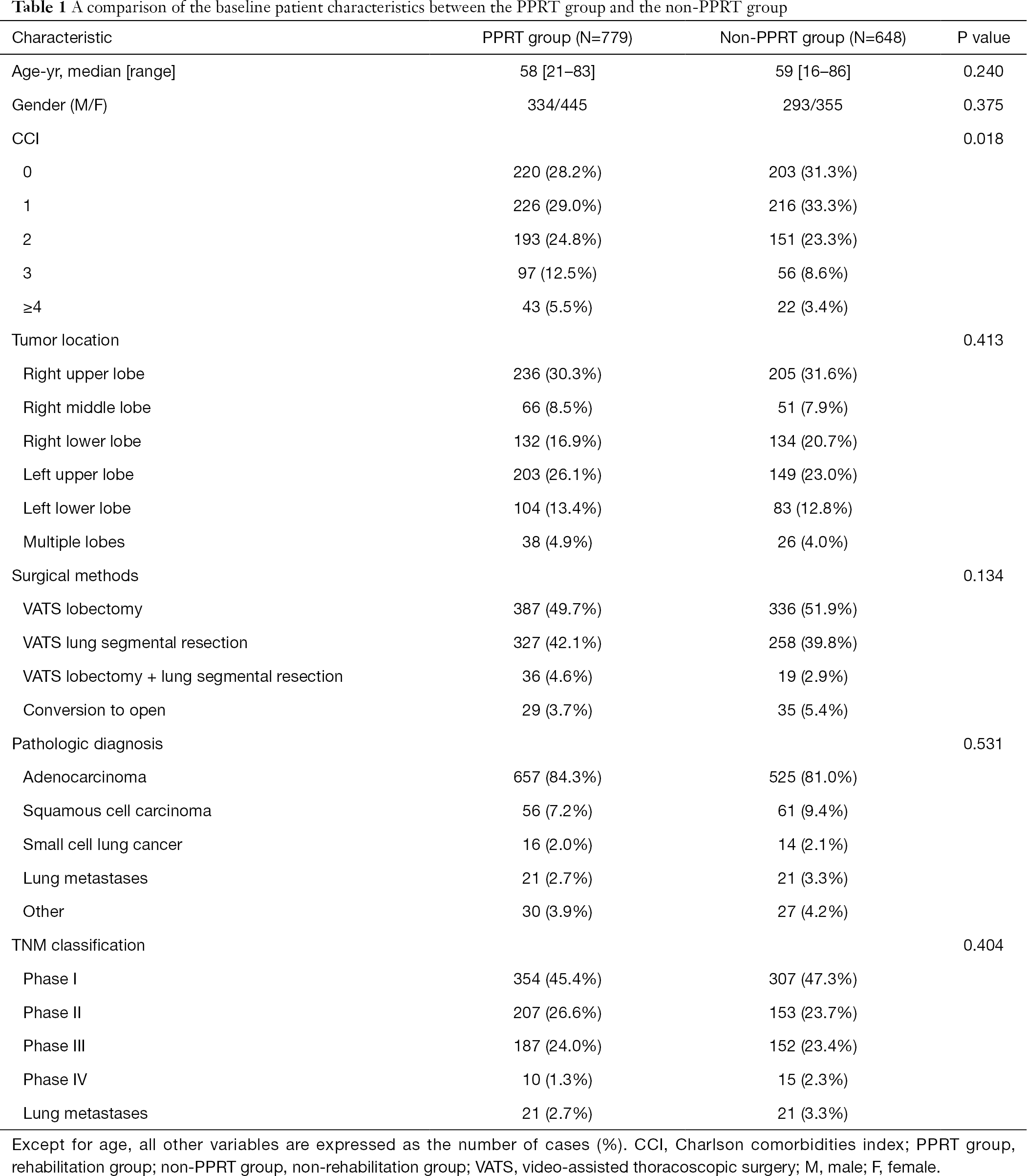 A comparison of hospitalization cost, time, and postoperative complications

Table 2 A comparison of hospitalization days, cost, and postoperative complications between the PPRT group and the non-PPRT group
Full table 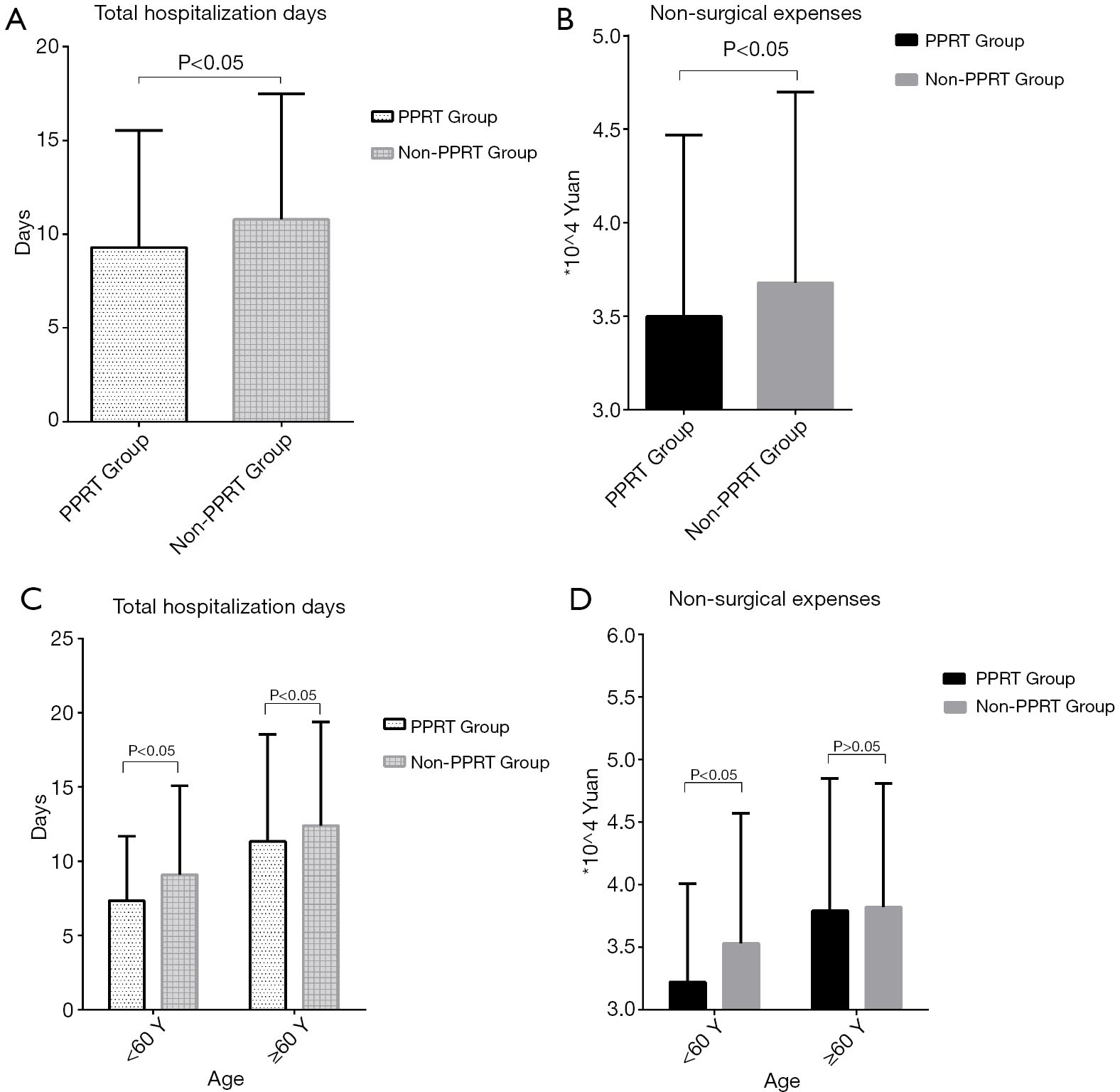 Table 3 A comparison of the age composition between the PPRT group and the non-PPRT group (P>0.05)
Full table

Our center is one of the earliest units to carry out thoracoscopic resection of lung cancer in China, with relatively mature surgical technology and processes. The patient population, including disease types, treated in our center are relatively constant, and is thus optimal for population matching. Beginning in April 2019, our center routinely carried out perioperative lung rehabilitation training for 10 months. This study compared the clinical baseline characteristics of patients who underwent lung cancer resection under thoracoscopy with or without perioperative lung rehabilitation training, and compared the differences in hospitalization cost, time, and PPCs. Considering that the cost of surgery and related consumables may bring bias to the comparison, non-surgical costs was selected as the observation index. Compared with the non-rehabilitation group, the rehabilitation group showed different degrees of benefits in terms of length of stay, cost of hospitalization, and PPCs. Considering that elderly patients with more basic lung diseases may benefit more from lung rehabilitation training, a comparative analysis was carried out based on the age of 60 years. The results showed that patients less than 60 years old benefited from lung rehabilitation training, while those aged 60 years and older only showed a significant benefit in terms of total hospital days, with no significant benefit observed in postoperative hospital days and non-surgical cost. This may suggest that short-term perioperative pulmonary rehabilitation training has a limited positive impact on the elderly patient who may have relatively greater trauma and weaker body function. However, it may also suggest that there is room for improving pulmonary rehabilitation training. This study also found there that there was no statistical difference between patients who were given guidance training once compared to patients who were give guidance training twice, suggesting that even one session of systematic guidance and training had a positive effect.

This study has some limitations. First, many other factors can contribute to the consumption of medical resources during thoracoscopic lung cancer resection. Since this is a retrospective study, it is not possible to completely exclude the bias caused by other confounding factors. Second, this study did not compare of some important indicators before and after lung rehabilitation, such as a lung function test, cardiopulmonary exercise test, and blood gas analysis, and these warrant further investigation by prospective randomized controlled clinical studies. Finally, this is a single-center study, and the reliability of the conclusions need to be verified by further multi-center trials.

Reporting Checklist: The authors have completed the STROBE reporting checklist. Available at http://dx.doi.org/10.21037/apm-21-478

Conflicts of Interest: All authors have completed the ICMJE uniform disclosure form (available at http://dx.doi.org/10.21037/apm-21-478). The authors have no conflicts of interest to declare.

Ethical Statement: The authors are accountable for all aspects of the work in ensuring that questions related to the accuracy or integrity of any part of the work are appropriately investigated and resolved. All procedures performed in this study involving human participants were in accordance with the Declaration of Helsinki (as revised in 2013). This study was approved by the ethics committee of Enze Hospital of the Taizhou Enze Medical Center (group) in Zhejiang province, China. As this was a retrospective study, informed consent was not required.