The correlation between selenium levels and autoimmune thyroid disease: a systematic review and meta-analysis

Selenium is a trace element necessary for the human body. Studies have shown that, except for the liver and kidney, the content of selenium in the thyroid is higher than in any other organ (5). Selenoproteins play an important role in maintaining the thyroid immune system, antioxidant system, hormone synthesis, and live metabolism (6). Selenium can regulate the levels of thyroid antibodies in patients with AITD and participates in the biosynthesis of thyroid hormones in the body (7). In recent years, many studies have shown that selenium supplementation is beneficial for regulating the serum levels of thyroid stimulating hormone (TSH), triiodothyronine (FT3), thyroxine (FT4), TGAb, and TPOAb, and these in turn have an immunomodulatory effect.

Inclusion and exclusion criteria for the literature search

Unpublished studies such as degree theses, non-English literature, reports with missing original data or unreferenced results, non-RCTs, studies in which the participants had other diseases, and clinical trials evaluating the combined effects of selenium and other drugs were excluded.

Two senior experts were invited to independently screen the topic and abstracts to eliminating the studies which did not meet the requirements of this study. This was followed by a review of the full text article to further determine whether the studies could be included. If there were inconsistencies between the two experts, a consensus would be obtained through discussion, or a third expert would be invited to arbitrate.

Two evaluators were invited to independently extract data from the included publications using a self-developed data extraction table. Results were cross-examined following independent extraction. The collated data included: (I) the title of the literature, the first author, the year of publication, and the publication journal; (II) the age, gender, sample size, and baseline comparability of the research subjects; (III) preoperative evaluation methods, intraoperative detection indicators, and postoperative observation indicators; (IV) outcome indicators including TSH, FT3, FT4, TGAb, TPOAb, and thyroid function. In the case of inconsistencies between the two experts, a consensus was reached through discussion, or opinion from a third expert was sought.

The data was analyzed according to the Cochrane Handbook 5.0.2 system evaluation manual. The STATA 12.0 software and Review Manager 5.3 software was adopted to organize and realize meta-analysis of the data included in the literature, respectively. The data sorted were all continuous variables, and each effect size was expressed by the mean ± standard deviation (SD) and the 95% confidence interval (CI). If the measurement unit was not uniform among different samples, the standardized mean difference (SMD) was used. Binary variables were expressed by frequency, and the effect size was calculated by using the changes before and after treatment in the experimental group and the control group, or by using a specific equation (Handbook Chapter 16) using the data before and after treatment directly given in the author’s article. When the results of each study could be combined, a meta-analysis was performed. The chi-square test was to detect the heterogeneity of different studies. The effect size deviation caused by heterogeneity rather than sampling error among included studies was represented by I2. When P>0.05 or I2<50%, the heterogeneity among the included studies was not statistically significant. When P<0.05 or I2>50%, the heterogeneity among the included studies was considered to be statistically significant, and the source of the heterogeneity was analyzed to eliminate the heterogeneity among the studies as much as possible. If the possible source of heterogeneity could be identified, the fixed-effects model (FEM) was used for meta-analysis. If the source of heterogeneity could not be identified, the random-effects model (REM) was used for meta-analysis. If meta-analysis was not possible (research data less than two), then descriptive analysis was applied, and the final analysis result was defined with statistical difference at P<0.05.

Results of the literature retrieval

The keywords were entered in 6 English databases for the preliminary search. A total of 1,246 related articles were retrieved, including 277 in PubMed, 198 in Medline, 171 in Web of Sciences, 244 in Embase, 332 in the Cochrane Library, and 301 in the Spring database. A total of 965 articles remained after using Endnote X8 software to eliminate duplicate articles. Following a review of the titles and abstracts, 897 literatures that were obviously not related to the inclusion criteria were excluded. The remaining articles were carefully read and cross-checked, and finally a total of 17 publications were included in this study. There were a total of 1,911 subjects in the 17 articles, of which 1,095 cases were in the experimental group and 816 were in the control group (Figure 1, Table 1). 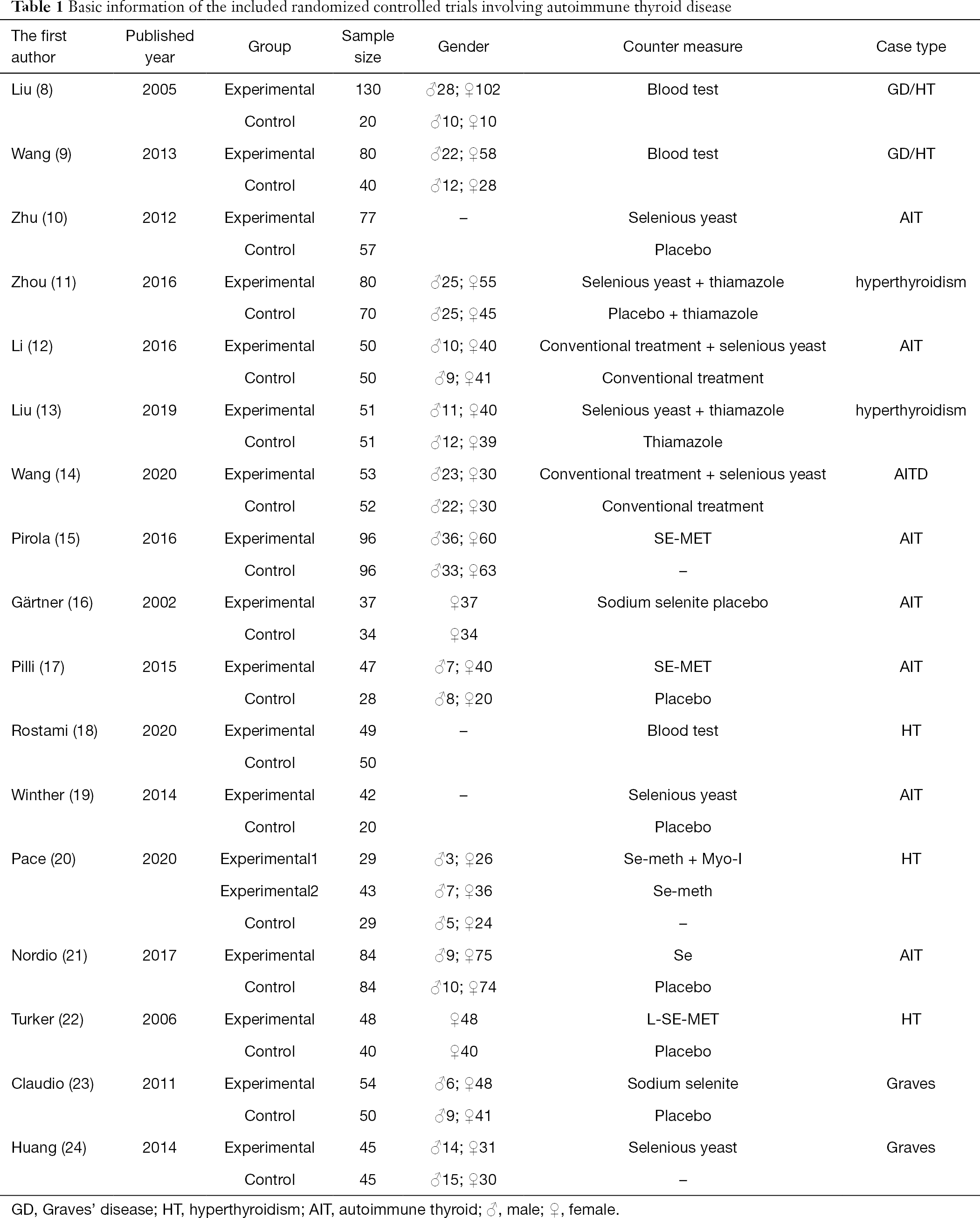 The included research literature was assessed for risk of bias according to the standards in the Cochrane 5.0.2 version of the systematic review manual. The 17 selected articles all reported random grouping. Of these, 5 studies only mentioned that patients were randomly grouped but failed to provide details on which random method was used, and therefore, they were judged as “unclear risk”. A total of 2 articles were determined to have risk of allocation concealment, and 4 articles had undetermined risk of allocation concealment. It was difficult to assess the risk for 8 articles as no blind test information was provided. A total of 2 articles were “high risk” due to the terms of the blind assessment and 3 articles were assessed as “unclear risk” due to a lack of blind test information. A total of 7 publications were judged as “unclear risk” due to unavailable selective report or incomplete data, 15 articles were determined as “unclear risk” as it was difficult to assess if there was any other bias affecting the results. The detailed results of this bias analysis are shown in Figures 2 and 3.

Figure 3 A bias risk evaluation of the included literature.

A total of 14 out of the 17 included articles reported changes in TSH levels (9,11-23), and 8 articles could be meta-analyzed (11,13-17,20,21). A total of 851 subjects were included, with 437 in the experimental group and 414 in the control group. The combined effect of Meta-analysis was given in Figure 4 (MD =0.06; 95% CI: − 0.53–0.66; Z=0.21; P=0.83), which indicated that the selenium combined antithyroid drug treatment group showed no statistical difference in the changes in patients’ TSH levels in contrast to the control group. This suggested that the TSH levels in patients in the selenium combined antithyroid drug experimental group were not statistically different from that in the control group.

Review Manager 5.3 software was used to study the analysis index based on the effect of selenium combined with antithyroid drugs in the treatment of AITD. The data regarding TSH, FT3, TPOAb, and TGAb levels were relatively scattered, and some literature data fell outside the funnel chart (Figure 9). In contrast, data regarding FT4 levels were relatively concentrated with fewer data outside the funnel chart (Figure 9), indicating that the publication bias of the included literature was low. 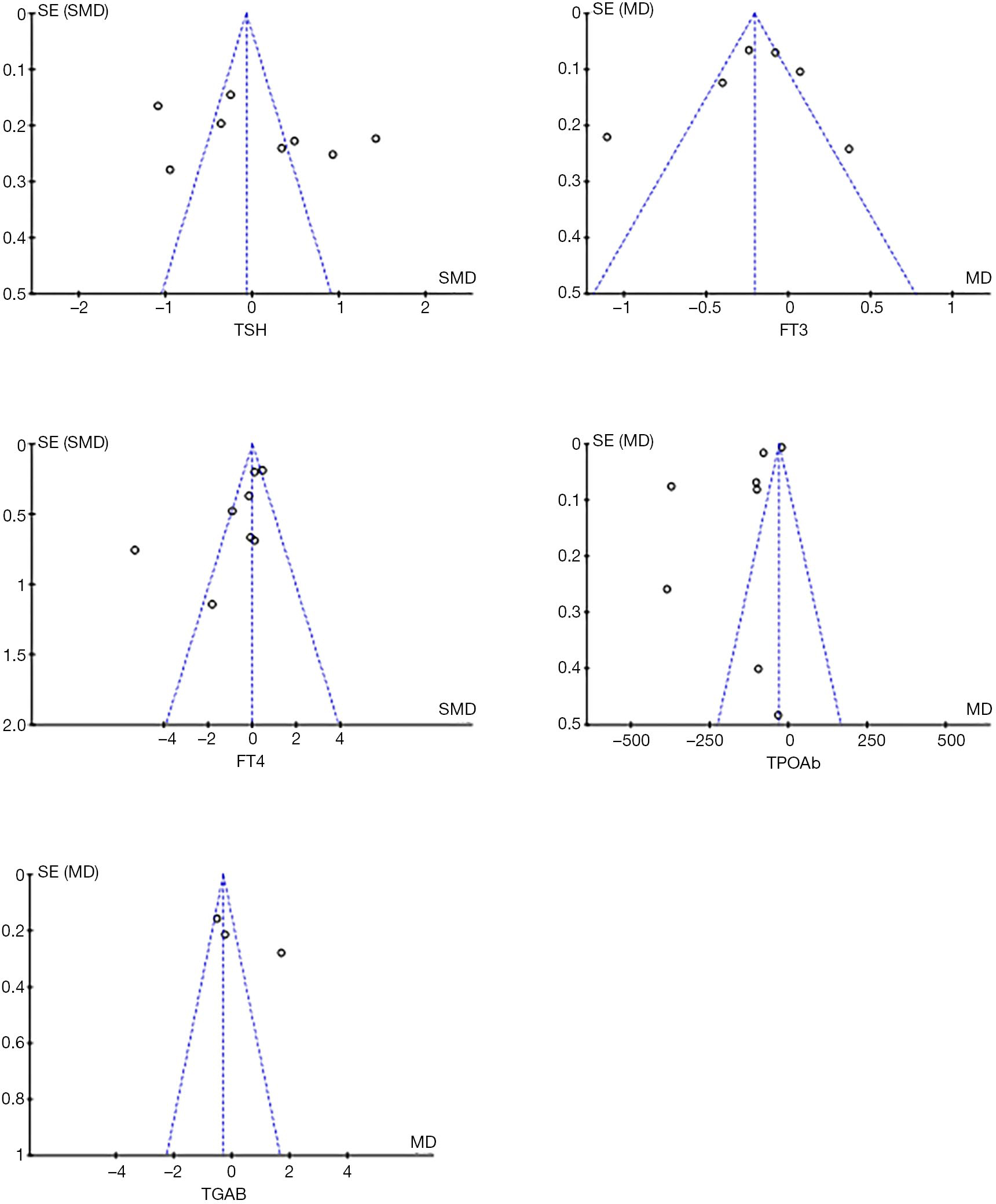 Selenium is an essential trace element for the human body and is widely distributed in thyroid tissue. It is present as a protein in the form of L-selenocysteine. Selenocysteine is encoded by the stop codon UGA and is synthesized into the polypeptide chain to form the secretion-centric protein called selenoprotein (25). Selenoproteins play an important role in the human body and are of great significance in thyroid hormone synthesis, the thyroid antioxidant system, and the immune system. So far, scholars have discovered 25 kinds of selenoproteins, the majority of which are involved in regulating thyroid diseases including iodothyronine deiodinase (ID), glutathione peroxidase (GSH-Px), and thioredoxin reductase (TR). These participate in the synthesis of thyroid hormone, limit its synthesis rate, regulate the proliferation or differentiation of certain cells, promote the synthesis of immunoglobulins, and inhibit the occurrence of immune responses (26,27). AITD is a common endocrine disease with a higher prevalence in females compared to males. It is caused by immune dysfunction in the body whereby T lymphocytes are activated and B lymphocytes are induced to produce a large number of antibodies against the thyroid’s own antigens, and this in turn causes thyroid hormone metabolism disorders and autoimmune thyroid damage. The thyroid is the main organ containing selenium in the human body and selenium plays a vital role in AITD. Selenium participates in the synthesis of thyroid hormones, maintains the integrity of the thyroid under strong oxidative stress, and protects the thyroid tissue (28). To date, a large number of reports have shown that selenium supplementation may have an effect on thyroid antibodies and affect serum levels of TSH, FT3, FT4, TPOAb, and TGAb in patients with autoimmune thyroid.

A meta-analysis was conducted to examine the correlation between selenium levels and AITD. The results demonstrated that selenium could visibly reduce the serum levels of FT3, FT4, and TPOAb in patients with AITD, but no observable effects were detected on the levels of TSH and TGAb. There were some limitations in this study. First, some included publications did not explicitly mention whether the REM applied in the study used allocation concealment and blind testing, and some analysis data were ambiguous. This may have affected the strength of the evidence in this study. Second, many different types of AITD were included in this study, with no specific AITD selected for analysis, and this may have caused the meta-analysis to be insufficiently accurate. There was limited literature examining TGAb levels and only 4 cases were screened. This may explain the differences in the TGAb results observed between this current meta-analysis and previous publications. Therefore, further high-quality and large-sample RCTs should be selected for future meta-analysis to determine the benefits of selenium supplementation in patients with AITD.

Reporting Checklist: The authors have completed the PRISMA reporting checklist. Available at http://dx.doi.org/10.21037/apm-21-449

Conflicts of Interest: All authors have completed the ICMJE uniform disclosure form (available at http://dx.doi.org/10.21037/apm-21-449). The authors have no conflicts of interest to declare.