A cross-sectional study of the knowledge, attitudes, and behaviors of obstetricians, gynecologists, and dentists regarding oral health care during pregnancy

Oral health is an important part of general health and affects the whole body. In 2010, the World Health Organization listed it among the ten most important standards of human health (1). However, some physiological changes during pregnancy, such as pregnancy gingivitis, benign oral masses (like pregnancy epulis), gomphiasis, dental erosion, tooth decay, pericoronitis, and periodontitis, may have a negative impact on oral health (2,3). Oral infection during pregnancy not only increases the incidence of preeclampsia, premature delivery, and low infant birth weight (4,5) but also causes the vertical transmission of cariogenic bacteria between mother and fetus (6), resulting in the occurrence of early dental tooth decay in the child. However, many pregnant women do not realize the significance of oral health to themselves and their fetuses and rarely seek the diagnosis and treatment of oral diseases during pregnancy. Previous studies in China have found that only a third of pregnant women have regular oral examinations (7,8). In other developed countries, the proportion of pregnant women using dental services is also low: in the United States only 23–49% of pregnant women seek oral health care, while, in the United Kingdom and Australia, this figure is 33–64% and 30.5–33%, respectively (9-12). There are many factors that influence whether a pregnant woman seeks oral health care, including difficulty accessing medical treatment, a lack of awareness of oral health care, lack of understanding of dental treatment during pregnancy, and fear that dental treatment will endanger fetal health. It is therefore important that pregnant women understand the changes to their gums and teeth that occur during pregnancy, strengthen their oral hygiene habits, and treat existing oral problems quickly in order to maintain good oral health during pregnancy and avoid prolonging any oral diseases.

The results of the present study show that the three main sources of oral health knowledge for pregnant women are mass media, advice from medical staff, and the experiences of their friends and relatives. This is slightly at odds with the main ways in which they expect to obtain knowledge: the guidance of medical staff, lectures, and mass dissemination. The results also show that pregnant women most frequently visit an obstetrics and gynecology department where, due to a lack of knowledge regarding oral hygiene during pregnancy, medical staff rarely recommend dental examinations and treatment. Furthermore, dentists often refuse to provide oral treatment services to pregnant women for a variety of reasons.

The present study issued a questionnaire to obstetricians, gynecologists, and dentists in general hospitals, maternal and child health hospitals, stomatological hospitals, and dental clinics in Beijing in order to understand the knowledge, attitudes and behaviors of health care providers regarding the oral health care of pregnant women. The aim of the study was to provide a basis for strengthening the continued education of health care providers, thereby helping them to offer better health care to pregnant women. We present the following article in accordance with the SURGE reporting checklist (available at http://dx.doi.org/10.21037/apm-20-1520).

The study was conducted in accordance with the Declaration of Helsinki (as revised in 2013). The study was approved by ethics board of Beijing Tsinghua Changgung Hospital (No.:19196-0-01) and informed consent was taken from all individual participants.

Researchers who had been trained in a uniform way conducted an anonymous questionnaire by mail and on-site distribution. The survey tool was based on the national consensus statement for oral health care during pregnancy introduced by the National Maternal and Child Oral Health Resource Center (OHRC) and on the Pregnant Women Survey questionnaire published (16), which was adjusted to take into account the situation of medical institutions in China and the main purpose of the study (Appendix 1).

The main data of the study consisted of participants’ basic data and data on oral health and pregnancy, oral health consultations for pregnant women, and oral treatment and drug use among pregnant women. In the questionnaire, the five-point Likert scale (strongly agree, somewhat agree, neither agree/disagree, somewhat disagree, strongly disagree) was adopted for questions regarding oral health and pregnancy and oral health consultations for pregnant women. Questions regarding the frequency of oral care provided by doctors to pregnant women used a scale of “often,” “sometimes,” “rarely,” and “never.” Knowledge-based questions were scored based on correct and incorrect answers: a correct answer was given one point, while an incorrect answer was given zero. A total of 20 knowledge-based questions were asked (maximum score 20), and participants were placed into two groups based on their score: group I (<10) failed, while group II (≥10) passed.

Fisher’s exact test was used to evaluate the awareness rate of respondents regarding questions on oral health and pregnancy and the dental treatment and safety of drug use for pregnant women. A percentage was used to describe respondents’ knowledge, attitudes, and behaviors, and a χ2 test was used to compare differences. Logistic regression analysis was conducted to further explore potential influencing factors related to knowledge of oral health during pregnancy.

All statistical analyses were carried out using a two-sided test. P<0.05 was considered statistically significant.

A total of 600 questionnaires were sent out, of which 405 were returned (response rate 67.5%). Women, staff with a bachelor’s degree or higher, staff in public hospitals, and staff with less than 10 years’ work experience made up the largest proportion of respondents. The percentage of subjects who had undergone professional training in oral health for pregnant women was relatively low. There were significant differences between dentists and obstetricians and gynecologists in gender, place of practice, number of years of work, number of working hours per week, and opinions on whether training in oral health care for pregnant women should be conducted (all P<0.05, Table 1). 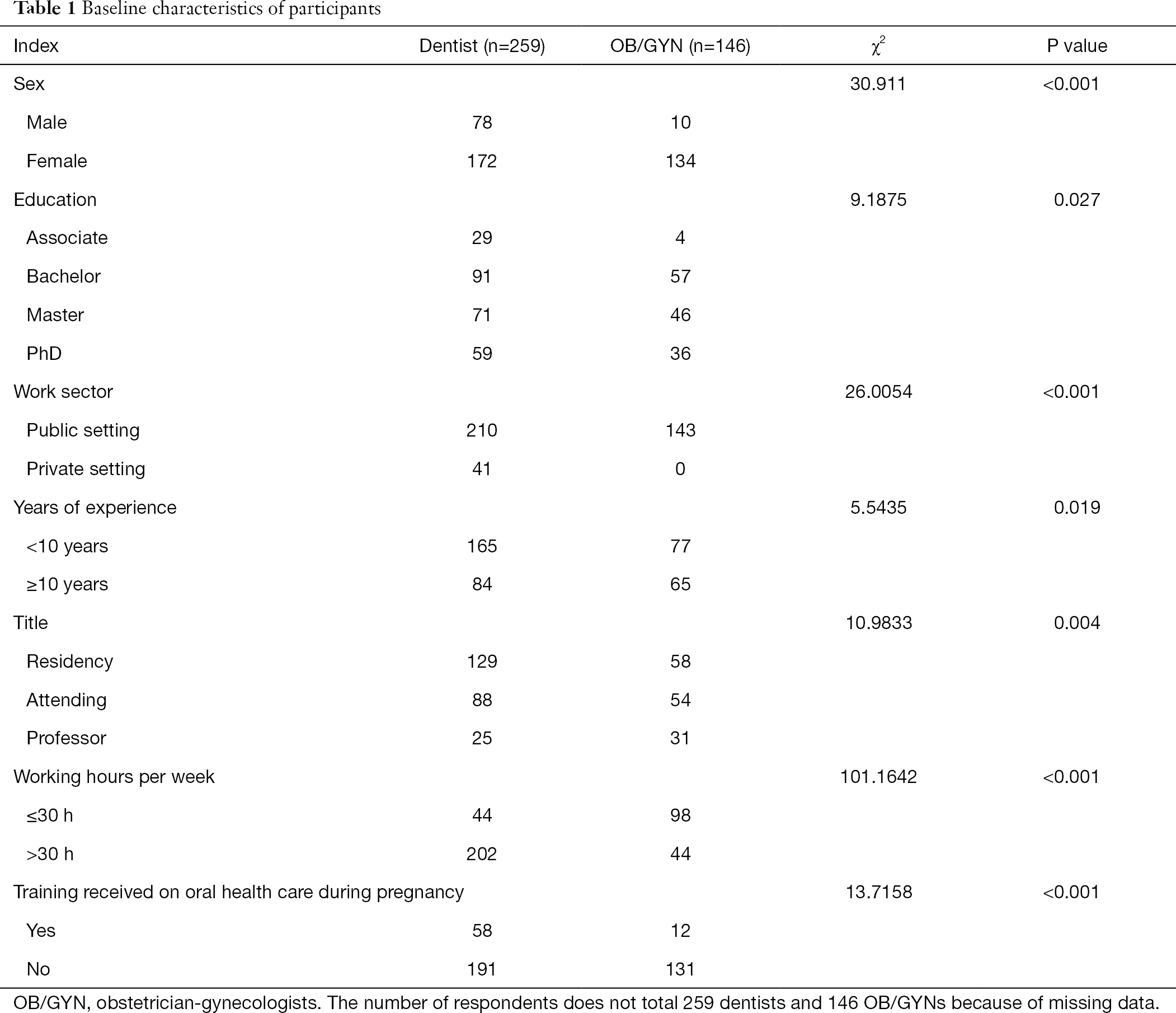 To investigate obstetricians’, gynecologists’, and dentists’ knowledge of oral health care during pregnancy and the safety of oral treatment for pregnant women, the study proposed five categories of associated knowledge: (I) oral health affects general health; (II) changes in hormone levels during pregnancy increase the risk of periodontal disease in pregnant women; (III) changes in dietary structure and lifestyle habits during pregnancy increase the risk of cavities in pregnant women; (IV) cariogenic bacteria can be transmitted vertically between the mother and fetus; (V) periodontal disease during pregnancy is associated with preeclampsia, premature birth, and low infant birth weight. For (I), (II), and (III), obstetricians, gynecologists, and dentists all demonstrated a good understanding, with the range of correct answers being 91.1–98.84%. For (IV) and (V), however, the cognitive accuracy of all respondents decreased: the range of correct answers for dentists was 79.15–82.24%, while that of obstetricians and gynecologists was only 44.52–54.79%. The difference was statistically significant (P<0.05, Table 2).

Obstetricians’, gynecologists’, and dentists’ awareness of the safety of oral treatment during pregnancy 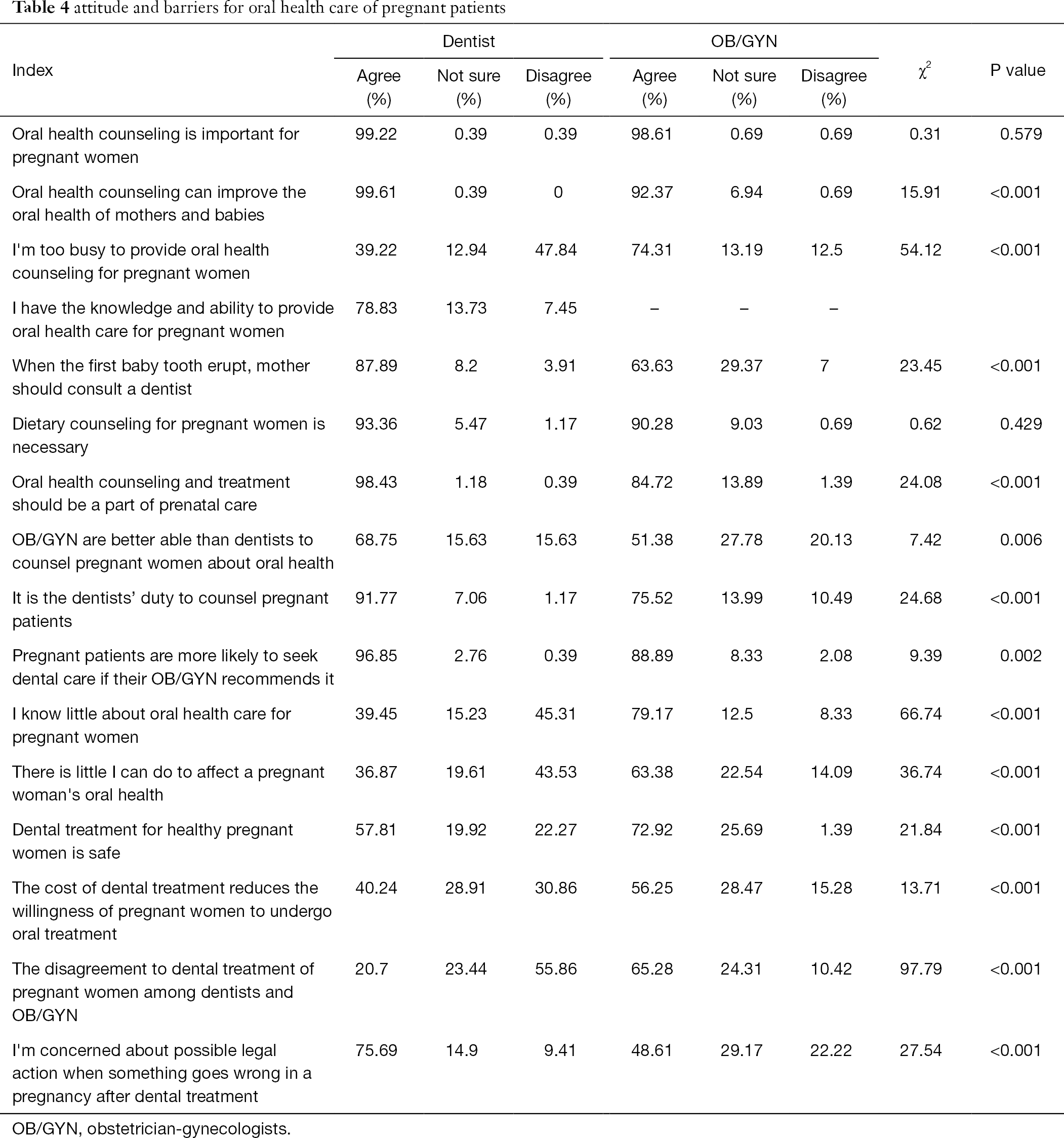 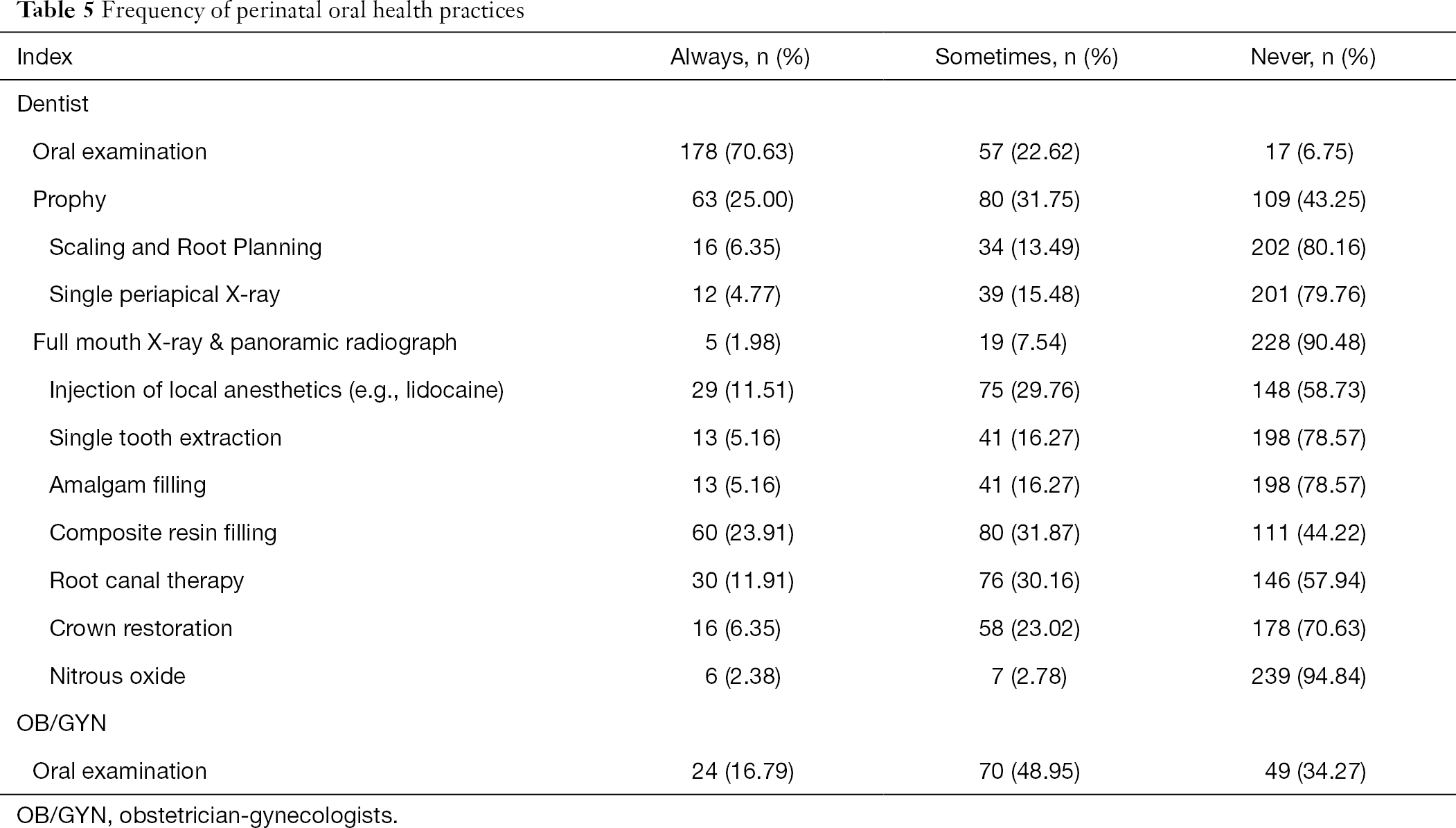 The questionnaire included 20 questions related to oral health during pregnancy. Each correct answer was given one point, with a maximum possible score of 20. The respondents were divided into two categories based on their score: group I (<10) failed, while group II (≥10) passed. Using group II (≥10) as the dependent variable, binary logistic regression analysis was used to further explore the factors affecting obstetricians, gynecologists’, and dentists’ knowledge of oral health care for pregnant women.

Oral health problems in pregnant women have recently attracted the attention of scholars both in China and abroad. New York, California, OHRC, and the American College of Obstetricians and Gynecologists (ACOG) have released oral health care guidelines during pregnancy and a national census (17,18). The Chinese census data projections in 2010 stated that there would be around 346 million women of childbearing age in China by 2018 and that around 16 million women of childbearing age would be pregnant each year. The theme of 2016’s Dental Day in China was “Oral Health, General Health,” which advocated paying attention to oral health care throughout life. Its first slogan was “Mom stays away from dental disease and gives birth to a healthy baby.” The National Health Commission of the People’s Republic of China issued the Oral Health Action Programme [2019–2025] and emphasized that oral health services should cover the whole population and the whole life cycle. Oral health knowledge is also a key part of the pre-marital physical examination, maternal health management, and the pregnant women’s school curriculum. Obstetricians, gynecologists, and dentists therefore all play a key role in preventing oral disease and encouraging the oral hygiene education of pregnant women.

The study showed that there is still a lack of knowledge of oral health care for pregnant women in China, which influences the attitudes and behaviors of dentists, obstetricians, and gynecologists. One of the reasons for this lack of knowledge could be that there are few relevant treatment norms in the sector and that medical staff consider the medical risks of oral treatment more carefully, with most doctors adopting a “stay away” approach towards the treatment of oral diseases in pregnant women. As such, it is suggested that basic and continued education on oral health care for pregnant women should be strengthened for dentists, obstetricians, and gynecologists, which would reduce the occurrence of oral diseases and establish oral health management during pregnancy. Another recommendation is to increase social security support and medical insurance for pregnant women’s oral treatment in order to reduce medical and patient costs. Relevant authorities may also be able to increase awareness of oral health care during pregnancy and improve treatment practices by issuing unified treatment guidelines as soon as possible.

Reporting Checklist: The authors have completed the SURGE reporting checklist. Available at http://dx.doi.org/10.21037/apm-20-1520

Conflicts of Interest: All authors have completed the ICMJE uniform disclosure form (available at http://dx.doi.org/10.21037/apm-20-1520). The authors have no conflicts of interest to declare.

Ethical Statement: The authors are accountable for all aspects of the work in ensuring that questions related to the accuracy or integrity of any part of the work are appropriately investigated and resolved. The study was conducted in accordance with the Declaration of Helsinki (as revised in 2013). The study was approved by ethics board of Beijing Tsinghua Changgung Hospital (No.:19196-0-01) and informed consent was taken from all individual participants.