Venous thromboembolism (VTE) includes deep vein thrombosis (DVT) and pulmonary thromboembolism (PE). The prevalence of VTE in medical inpatients is 12%, the peak of VTE incidence is 65–75 years old, and the elderly are usually the patients at highest risk of VTE (1). VTE causes more than 100,000 deaths every year, with more than half of deaths occurring during hospitalization, especially in elderly patients. Approximately 18% to 65% of VTE-associated mortality has been reported as being preventable (2). Multimorbidity, which is defined as the co-occurrence of 2 or more chronic comorbidities is the common characteristic in the majority of elderly patients. We present the following article in accordance with the STARD reporting checklist (available at http://dx.doi.org/10.21037/apm-21-464).

We conducted a retrospective case-control study in which the data from 200 patients with VTE and 234 non-VTE patients were consecutively collected from January, 2019 to December 31, 2019 from the intensive care unit (ICU) in Beijing Shijitan Hospital. In the VTE group, the inclusion criteria were the following: ≥65 years, ≥2 days in the ICU, DVT diagnosed by lower extremity venous duplex compression ultrasonography and PE diagnosed by computed tomography (CT) angiography of the pulmonary artery or ventilation-perfusion imaging. The exclusion criteria were as follows: <65 years, DVT and PE diagnosed before admittance to the ICU or <2 days in ICU, and superficial vein thrombosis. This study was approved by the Medical ethics committee of Beijing Shijitan Hospital Affiliated to Capital Medical University (No. 2020-2). All procedures performed in this study involving human participants were in accordance with the Declaration of Helsinki (as revised in 2013). Individual consent for this retrospective analysis was waived.

All data were analyzed by SPSS version 25 (IBM Corp., Armonk, NY, USA), and the count data are expressed as a percentage. χ2 test and Fisher’s exact probability test were used for comparison between groups. The measurement data are expressed as . If the distribution of data was normal, a parametric model was used to calculate the P value and confidence interval. For a nonnormal distribution of data, a nonparametric rank-sum test was used calculate the P value and confidence interval. We used logistic regression to analyze the risk factors in the VTE group. We drew receiver operating characteristic (ROC) curves and calculated the sensitivity, specificity and the value of the area under the curve (AUC). 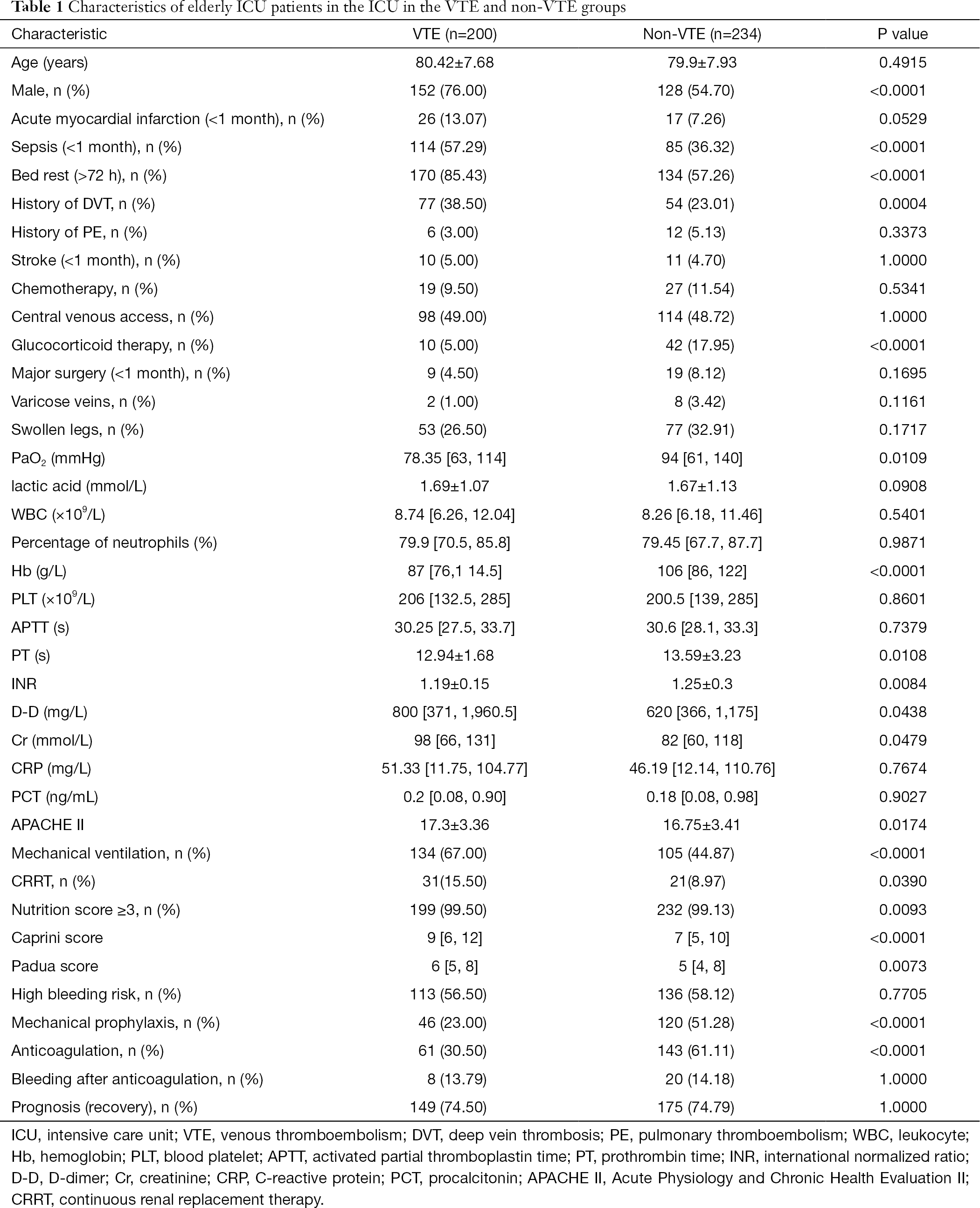 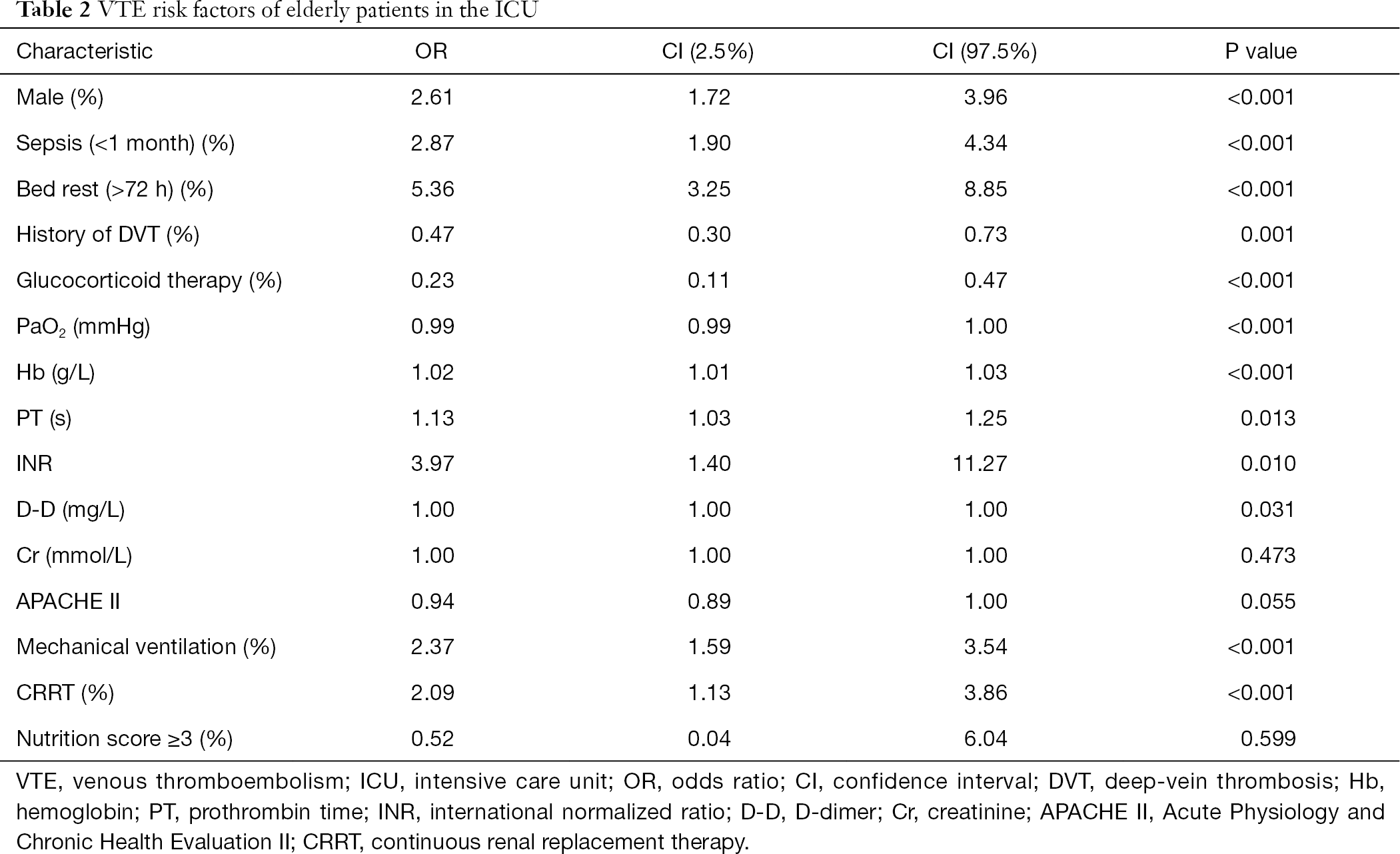 Comparing the Padua and Caprini RAMs in elderly ICU patients 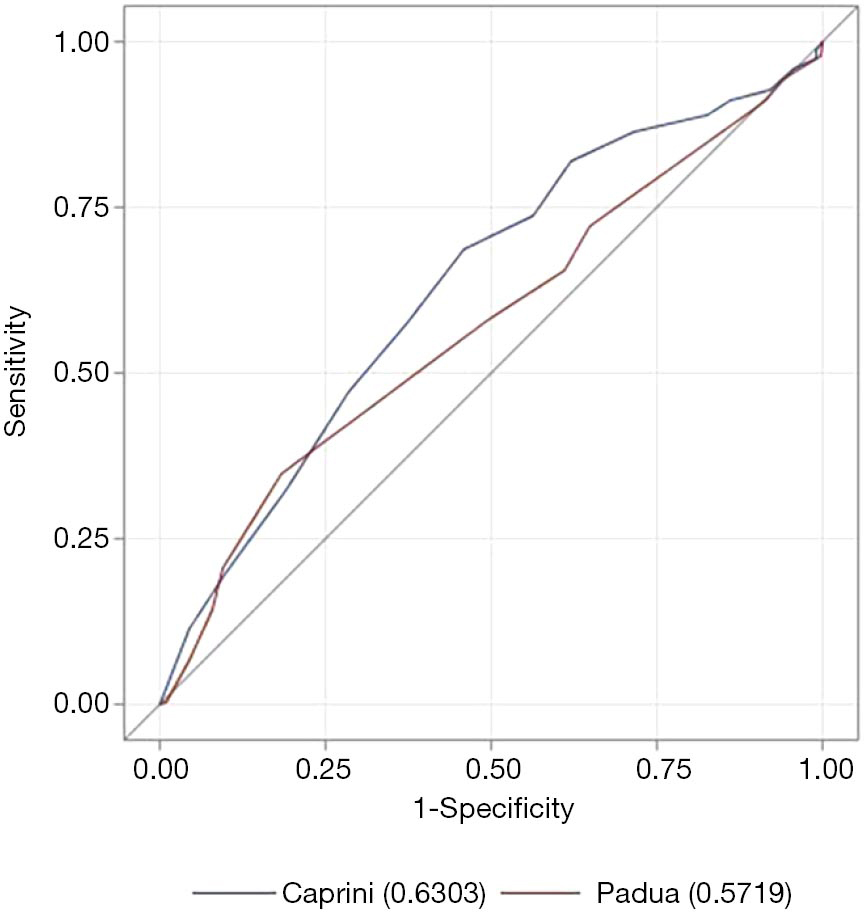 Our study found that the proportion of male patients in the VTE group was much higher than that in the non-VTE group, while sepsis, being bedridden (>72 hours), pneumonia, and presence of tumor were also significantly higher; with sepsis, being bedridden (>72 hours), and pneumonia were associated with VTE. Hypercoagulability and blood stasis are the basis of thrombosis (11). Blood clot occurs frequently due to increased coagulation factor activity in elderly patients (12). Furthermore, interleukin 6 (IL-6) cytokine is secreted by monocyte macrophages and T lymphocytes after infection. The high concentration of IL-6 can damage vascular endothelial cells, promote immune adhesion and micro thrombosis, inhibit endothelial repair, and damage blood vessels (13). In the addition, a large number of other inflammatory cell infiltrates release inflammatory factors and inflammatory mediators, resulting in systemic inflammatory response syndrome, leading to lung tissue damage, which can initiate endogenous coagulation and form microthrombosis in the blood circulation (14). Kaplan et al. demonstrated that the incidence of VTE in patients with sepsis is higher than in those without sepsis; it has also been found that the deposition of platelet-fibrin thrombi and the development of disseminated intravascular coagulation are dysregulated in these patients (15).

In the VTE group, there were more patients with a history of DVT, diabetes, coronary heart disease, and heart failure, which were significantly correlated with the incidence of VTE in elderly ICU patients. Wang et al. showed that the proportion of hypertension, active malignant tumor/ chemotherapy, diabetes, coronary heart disease, heart and/or respiratory failure, acute myocardial infarction, and/or ischemic stroke to be significantly increased in elderly patients with VTE in the ICU (16). Our study was consistent with the above findings. In terms of laboratory examination, PaO2, Hb, PT, and INR in the VTE group were lower than those in the non-VTE group (P<0.05), while PaO2, Hb, PT, and INR were significantly correlated with the occurrence of VTE. Wang et al. reported that PaO2 level is an important factor affecting the occurrence of VTE in elderly acute exacerbation of chronic obstructive pulmonary disease (AECOPD) patients (17). D-D, Cr, APACHE-II, mechanical ventilation, hemofiltration, nutritional risk score, Caprini score, and Padua score were significantly higher in the VTE group than in the non-VTE group. D-D, mechanical ventilation, and CRRT were important risk factors for VTE in elderly ICU patients. Fu et al. found D-D to be an independent factor of VTE in ICU patients. Laboratory examinations and Caprini risk assessment scale can increase the predictive ability of VTE in ICU patients (18). However, the specificity of D-D is poor, and it increases in the cases of tumor, infection, and trauma. Multiple diseases coexist in elderly patients. For physicians, it is necessary to dynamically observe the level of D-D. Liu et al. found that D-D was significantly associated with VTE in elderly AECOPD patients (19). Li et al. confirmed that, with the increase of APACHE II score, the mortality rate gradually increases: when the score is ≥25, the mortality rate increases significantly; when the score is ≥35, the mortality rate increases to 100%. The actual mortality rate is significantly and positively correlated with APACHE II score (20). Studies by An et al. evaluated the APACHE II score of a death group 24 hours after admission and found that their score was higher than that of the survival group. It has also been found that the higher the Nutrition Risk Screening 2002 (NRS-2002) value is, the worse the prognosis (21). Another retrospective study by Adimi Naghan et al. demonstrated that if the APACHE II score is greater than 17.6, most cases develop VTE in the first 2 weeks of ICU stay (22). Development of acute respiratory distress syndrome (ARDS) and higher positive end-expiratory pressure (PEEP) were associated with an increased risk for development of VTE (23). Prabhakaran et al. demonstrated that increased ventilator days were also associated with higher risk of developing VTE (24).

In our study, the number of elderly patients receiving mechanical prophylaxis and anticoagulation therapy in the non-VTE group was significantly higher than that in the VTE group. The 9th edition of US guidelines on the prevention of venous thrombosis pointed out that prevention of VTE should be given to elderly patients at high risk of VTE (25). High risk factors such as age, bedridden, coexistence of multiple diseases and central venous catheterization lead elderly ICU patients to be high or highest-risk group of VTE. If there is no contraindication, low dose unfractionated heparin (LDUH) (5,000 u subcutaneous injection, twice a day) or low molecular weight heparin (LMWH) (such as enoxaparin 40 mg subcutaneous injection, once a day; dalteparin 5,000 u subcutaneous injection, once a day) should be recommended for high-risk patients in ICU to prevent the occurrence of VTE. And mechanical prophylaxis should be combined with chemoprophylaxis. For patients with high risk of bleeding, graduated compression stockings (GCS) and (or) intermittent pneumatic compression (IPC) were used to prevent thrombosis until the risk of bleeding was reduced, and then chemoprophylaxis should be prescribed or both were used in combination. ICU patients should be evaluated dynamically according to the development of the disease (26). García-Olivares and other researchers discovered that establishing a prophylaxis protocol in the ICU can reduce the incidence of VTE from 11.9% to 4.5% (27,28). In regard to mechanical prophylaxis, Vignon et al. showed that, compared with those receiving GCS alone, there was no difference in the incidence of VTE in those who received IPC together with GCS (29). For nursing strategy in the our intensive care unit, the patients without consciousness will be given GCS and IPC, the patients with consciousness will be given health education of VTE besides the above mechanical prophylaxis.

Most of the elderly ICU patients are at high-risk of VTE. Furthermore, due to the coexistence of multiple diseases in elderly patients, the interaction between drugs and the decline of liver and kidney function, the risk of bleeding is significantly increased. Parikh et al. found that only 20.2% of medical ICU patients received VTE prophylaxis which were recommended by American College of Chest Physicians (ACCP) (31). In this study, we found that mechanical prophylaxis was the main prophylaxis method for high bleeding-risk patients, which was consistent with the recommendations of the Caprini RAM (32). Arabi et al. found that only using IPC was associated with a significantly decreased incidence of VTE. The ACCP recommend that IPC can be used for patients with contraindication to drug thromboprophylaxis (33). In addition, our study found no significant difference between the VTE group and non-VTE group in bleeding after anticoagulation. Another trial suggested that patients older than 75 years who were treated with novel oral anticoagulants (NOACs) had a greater reduction in the risk of major bleeding than those treated with vitamin K antagonists (VKAs) (34). In the recent multiple centers research including 41 tertiary hospitals in China, Zhou found that 85.4% ICUs completed VTE risk assessment within 24 hours after admission. 71.4% ICUs used the Caprini score to assess VTE risk. 97.6% of ICUs used IPC as mechanical prophylaxis. LMWH was the initial chemoprophylaxis in ICUs (35).

Our study had a few limitations which should be mentioned. First, the discharged patients were not followed up, we will follow-up the discharged patients in our further research to evaluate the prognosis of the elderly ICU patients. Second, because there was no similar study in the past, we used retrospective study to explore. In the future, large cohort study will be needed to verify. VTE is a preventable death related to hospitalization, and it is also one of the main causes of medical complications. With the aging global population, elderly patients are becoming a high-risk VTE group due to their age, fragility, frequent bed rest, presence of other diseases, etc., and the elderly ICU patients are the key population for VTE prevention and control. However, balancing the benefit and risk of treatment requires us to dynamically assess the risk of VTE and bleeding in elderly patients. In the next phase of our research, we plan to conduct a prospective study on the individualized comprehensive management of VTE in elderly ICU patients. Combined with biomarkers, imaging, VTE risk assessment scale, and bleeding risk assessment scale, a precise treatment plan for elderly ICU patients can be formulated.

The authors are grateful for the patients at Beijing Shijitan Hospital.

Funding: The authors disclosed receipt of the following financial support for the research, authorship, and/or publication of this article: National Multidisciplinary Cooperative Diagnosis and Treatment Capacity Project for Major Diseases: Comprehensive Treatment and Management of Critically Ill Elderly Inpatients (No. 2019.YLFW); Beijing Municipal Science & Technology Commission Research Project (No. 2018-A20).

Reporting Checklist: The authors have completed the STARD reporting checklist. Available at http://dx.doi.org/10.21037/apm-21-464

Conflicts of Interest: All authors have completed the ICMJE uniform disclosure form (available at http://dx.doi.org/10.21037/apm-21-464). The authors have no conflicts of interest to declare.

Ethical Statement: The authors are accountable for all aspects of the work in ensuring that questions related to the accuracy or integrity of any part of the work are appropriately investigated and resolved. This study was approved by the Medical ethics committee of Beijing Shijitan Hospital Affiliated to Capital Medical University (No. 2020-2). All procedures performed in this study involving human participants were in accordance with the Declaration of Helsinki (as revised in 2013). Individual consent for this retrospective analysis was waived.