As one of the most common serious problem in neurosurgery, craniocerebral injury is associated with poor prognosis and high rates of mortality and disability. One of the main reasons for this is due to the cerebral hernia caused by high invasive intracranial pressure (ICP). Therefore, to improve prognosis and overall survival, it is important to remove the hematoma and reduce the ICP. Up until now, decompressive craniectomy has been regarded as the most effective treatment for severe craniocerebral injuries (1). Many neurosurgeons have found that the prognosis and life quality of craniocerebral injuries are significantly different; therefore the indication of decompressive craniectomy is controversial (2). There are some limitations of the Glasgow Coma Scale (GCS), such as subjective and lack of weight in the three parts of the scale, thus, evaluation during the perioperative period is not exactly accurate. Cranioplasty with special material is a heavy financial burden for many people in development country. Therefore, an indicator for predicting the possibility to accept the real-time cranioplasty with the original skull after removing the hematoma could effectively improve patients’ quality of life (3). To explorer how do some of the preoperative factors influence the prognosis of decompressive craniectomy, we retrospectively analyzed 60 craniocerebral cases between June 2017 and March 2019 at the Shantou Central Hospital using transcranial Doppler (TCD) and ICP monitoring. We present the following article in accordance with the STROBE reporting checklist (available at http://dx.doi.org/10.21037/apm-21-504).

Between June 2017 and March 2019, 60 craniocerebral patients at the Shantou Central Hospital (36 males and 24 female, age 21–70 years) without multiple trauma, multiple organ failure, and moribund condition, who were admitted to Shantou Central Hospital were included in the present study. All patients were alive 6 months postoperatively. The patients were divided into 2 groups according to the following standards: (I) GCS score ≥8 on the 7th day postoperatively; (II) ICP continuously lower than 25 mmHg for the entire 7-day duration postoperatively; and (III) brain tissue consistently offset from the skull surface by 5 mm in the postoperative computed tomography (CT) scan. The clinical outcome was determined based on the Glasgow Outcome Scale (GOS) 1, 3, and 6 months postoperatively. Group A included patients who met all the standards, whereas Group B included patients who did not (Table 1). The study was conducted in accordance with the Declaration of Helsinki (as revised in 2013). The study was approved by Shantou Central Hospital (No.[2017]Scientific Research-001). Written informed consent was provided by all participants.

Hemodynamic parameters of the 25 patients who underwent TCD scan

Hemodynamic parameters were compared between both groups. The Vm, Vd, RI, GCS score =8, ICP after dural tension suture (mmHg), and ICP 24 h postoperatively (mmHg) were statistically significant, whereas Vs and PI were not (Table 2).

Complications of the 60 patients on the 7th postoperative day

Shock, delayed intracranial hematoma, and subdural hygroma were statistically different in the 2 groups, while intracranial infection, seizures, surgical wound healing delay, and hydrocephalus were not (Table 3). 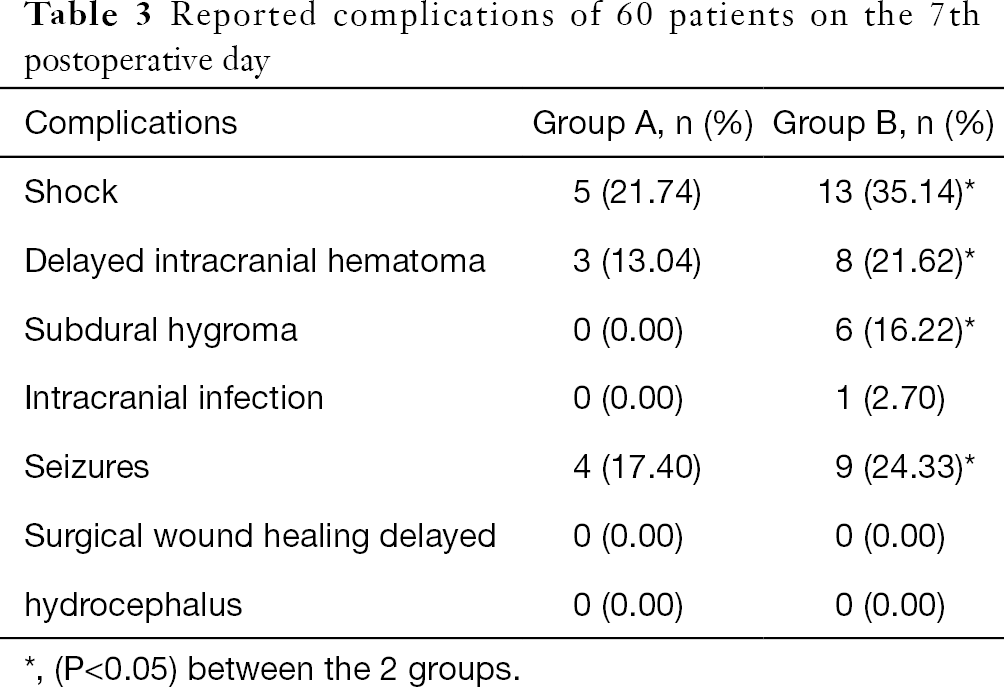 There was a statistically significant difference in shock between the 2 groups, indicating that the parameters of this group could be regarded as a contraindication of real-time cranioplasty (Table 4).

Severe craniocerebral injury is a disease with high mortality and disability. Therefore, it is meaningful to come out with a new protocol to deter the personal treatment. The main reason account for the death is the exorbitant ICP, therefore, as an effective was to reduce ICP, decompressive craniectomy was widely used in lots of disease with high ICP such as severe craniocerebral injury and massive stroke since 1901 (4). With a hundred years application, neurosurgeons believe that patients can be benefit from the ICP reducing and the improvement of blood supplement in the peri-sylvian area, reducing the rate of mortality. However, the operation can lead to seizures, trephination, and paradoxical herniation, which reduce patients’ quality of life (2,5). Emergency cranioplasty, or real-time cranioplasty, can be a solution for some patients to avoid these complications (6). Moreover, because of the operation gap, some doctors cannot do the standard large craniectomy decompression correctly. In these cases, patients suffer from the insufficient decompression and rebleeding partly caused by the undersized bone flap and incomplete removal of the spina ossis sphenoid (7). The ICP of some patients can be reduced to 30% of preoperative or normal level after incising the dura mater. The postoperative CT scan at 24 h showed that the brain tissue was lower than 5 mm above the skull bone, indicating a low possibility of cerebral hernia. This can be regarded as the physiological fundamental of real-time cranioplasty (1). Patients can avoid complications, as well as reduce the financial burden of elective cranioplasty by real-time cranioplasty (8). Furthermore, one of the potential reasons to explain that real-time cranioplasty can lead to a better prognosis is that these patients have less seizure-related factors course by the delay cranioplasty such as syndrome of trephined (2).

ICP monitoring is highly recommended for brain traumatic treatment and has been confirmed in several randomized controlled trials and guidelines (9,10). However, controversy still exists regarding the duration of ICP monitoring. The findings of the present indicated that the first 24 h of ICP monitoring are particularly important for evaluating the prognosis and can be used as a short-term complication indicator. There is a significant different outcome of mean ICP in 19.00±3.00 mmHg (groups A and B). In the previous hypothesis, there is a threshold ICP in the early stage of brain trauma (11,12). The damage of neurons and glia cells is different above or below the threshold. There are many adjustment factors that are used to control postoperative ICP such as mannitol, hypertonic saline, and albumin (13). However, the inappropriate use of mannitol will lead to a poor prognosis like renal failure. Therefore, it is important to downregulate the postoperative ICP according to ICP monitoring during treatment (14).

TCD is a convenient and non-invasive test. It is an exploratory job to choose the operation method based on the TCD (15). In the present study, we found that patients with Vm >56.33 cm/s, Vd >40.28 cm/s, RI <0.57, preoperative GCS score =8, and ICP 24 h after operation <19 mmHg had a good prognosis. The findings indicated that there should be some optimization in the indications of decompressive craniectomy. Notably, there was no statistical difference in the PI between the 2 groups. The PI is an objective factor in reflecting the situation of blood supplement. Therefore, observation of the brain pulse before dural tension suture should no longer be the prognosis indicator. Brain pulse disappearance was once regarded as the predictor of cerebral infarction.

Decompressive craniectomy was once regarded the most useful treatment for severe craniocerebral injury. However, the findings of our study indicate that with the use of ICP monitoring and TCD, some patients could be potentially treated in a less invasive way, furthermore, the accurately indicators of real-time cranioplasty can be further discussed.

Funding: This study was funded by the Science and Technology Bureau of Shantou City (No. Shanfuke2018-11-5).

Reporting Checklist: The authors have completed the STROBE reporting checklist. Available at http://dx.doi.org/10.21037/apm-21-504

Conflicts of Interest: All authors have completed the ICMJE uniform disclosure form (available at http://dx.doi.org/10.21037/apm-21-504). The authors have no conflicts of interest to declare.

Ethical Statement: The authors are accountable for all aspects of the work in ensuring that questions related to the accuracy or integrity of any part of the work are appropriately investigated and resolved. The study was conducted in accordance with the Declaration of Helsinki (as revised in 2013). The study was approved by Shantou Central Hospital (No.[2017]Scientific Research-001). Written informed consent was provided by all participants.