Risk factors for brain metastases in patients with non-small cell lung cancer: a meta-analysis of 43 studies

Lung cancer is one of the most common malignant tumors worldwide (1). Non-small cell cancer (NSCLC) is the prevailing histological subtype of lung cancer, accounting for approximately 80–85% (2). Given that its early clinical symptoms are not typical, NSCLC diagnosis is usually based on tumor markers, imaging, and histopathological characteristics. It is estimated that approximately 40% of NSCLC patients present with concomitant metastatic disease at initial diagnosis (3,4), most commonly of the brain, bone, liver, etc. Despite advancements in therapy (1), the prognosis for patients with advanced lung cancer is not good, especially for patients combined with brain metastases (BM) (5).

Previous studies have shown that BM is a key cause of morbidity and mortality in cancer and that approximately 20–40% of NSCLC patients will develop BM (6). The median survival period of NSCLC patients with BM is only about 3–6 months (7). Although some targeted methods can play a role in controlling the intracranial metastasis of tumors, few drugs can effectively cross the blood-brain barrier (8). At present, radiation therapy and surgical intervention are the most effective therapeutic options for BM; however, these two treatments may significantly impact the quality of life of patients (9). A meta-analysis of the risk factors for the occurrence of BM in NSCLC has not yet been performed. Therefore, there is a pressing need for greater assessment of the risk factors associated with BM in NSCLC patients, which may allow for prevention and earlier treatment of BM and help patients achieve prolonged survival. The purpose of our meta-analysis was to summarize the risk factors and clinical characteristics of NSCLC patients with BM.

We present the following article in accordance with the PRISMA reporting checklist (available at http://dx.doi.org/10.21037/apm-20-1722).

The included studies’ quality was assessed using the Newcastle-Ottawa Scale (NOS) (10); scores of 5–9 were considered fair, while scores of 1–4 indicated a high risk of bias. The results of this meta-analysis were evaluated using the GRADE profiler, and degradation was assessed in terms of evidence quality, including the risk of bias, inconsistency, indirectness, imprecision, and publication bias. Simultaneously, upgradation was expressed by large effect, plausible confounding, and dose-response gradient (11).

Data in our meta-analysis were analyzed using Review Manager (Version 5.3. Copenhagen: The Nordic Cochrane Centre, The Cochrane Collaboration, 2014) software. The estimated OR and WMD were used to evaluate the affiliation between the incidence of BM and the clinicopathological features of NSCLC patients. All statistic values were reported with 95% CIs, and the two-sided P value threshold for statistical significance was set at 0.05. The Chi-square test and the I2 statistic were used to evaluate heterogeneity among studies. Specifically, I2 >50% and P<0.05 for the Chi-square test suggested significant heterogeneity among the included studies. When the homogeneity hypothesis was not rejected, a fixed-effects model was used; otherwise, a random-effects model was used to estimate the OR and 95% CI (12).

To investigate the effects of individual studies on the overall results, we also performed a sensitivity analysis by successively excluding each study. Finally, a funnel plot was used to assess potential publication bias. Considering that a small number of included studies may result in publication bias, Egger’s and Begg’s Tests and funnel plots were generated for indexes with more than 10 relevant studies (13).

We identified 14,289 studies in our initial literature search, as shown in Figure 1. Thirty-six studies were excluded due to duplication. After reviewing the titles and abstracts, we identified 138 potentially eligible studies for full-text assessment. A further 95 studies were excluded because they either lacked an outcome of interest or had no compelling information and control groups. Ultimately, 43 studies met our selection criteria and were included in the final analysis. All studies’ characteristics and demographic data are presented in Table 1. The retrieved studies were published between 2004 and February 2020, and a total of 11,415 patients were involved. Of the 43 included studies, 26 were cohort studies, and the remaining 17 were case-control studies. Since all of the included studies were either cohort or case-control studies, the NOS was used for quality assessment, and the results showed that all included studies were of fair quality (Table 1). 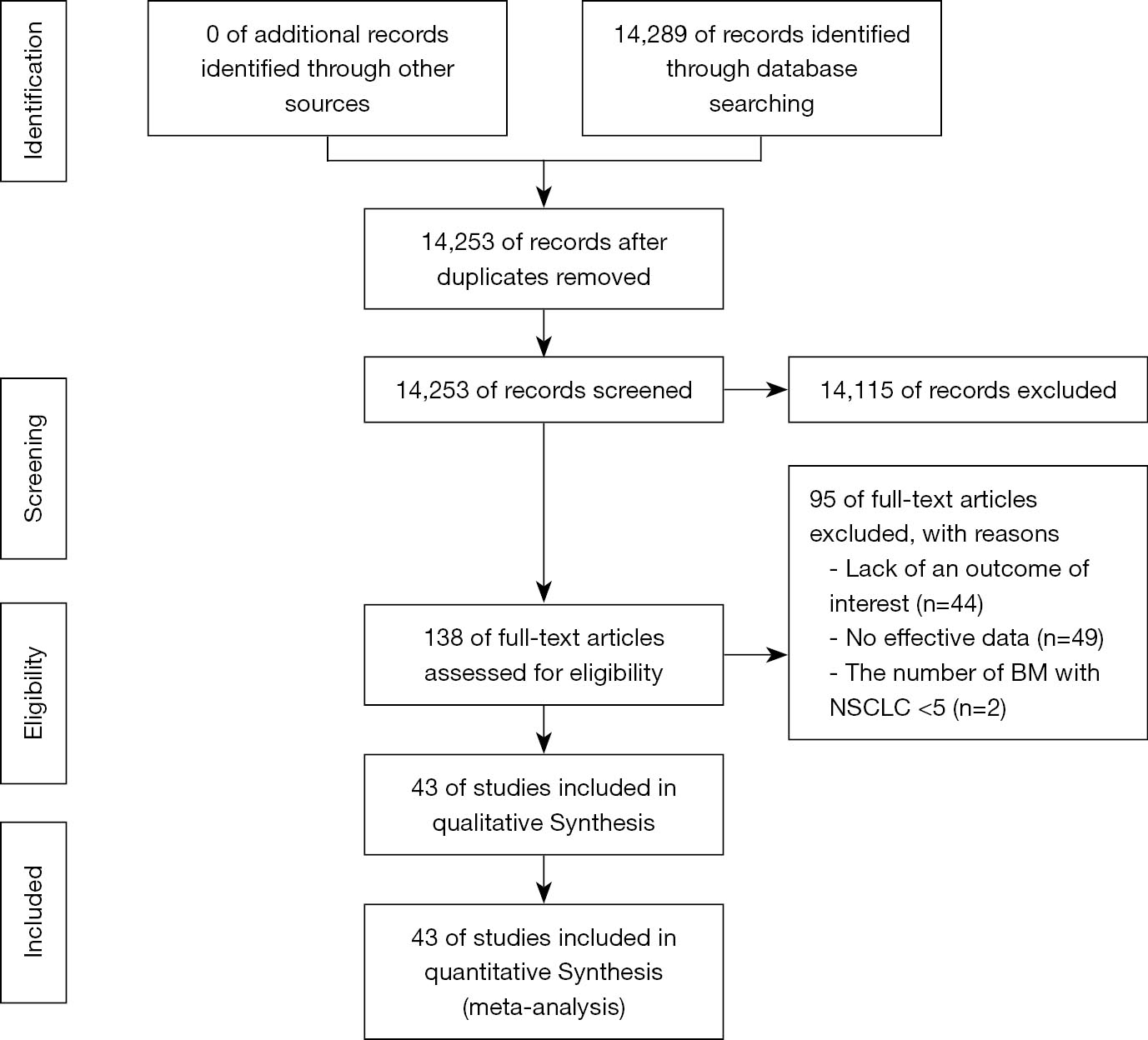 Figure 1 Selection of the included studies. 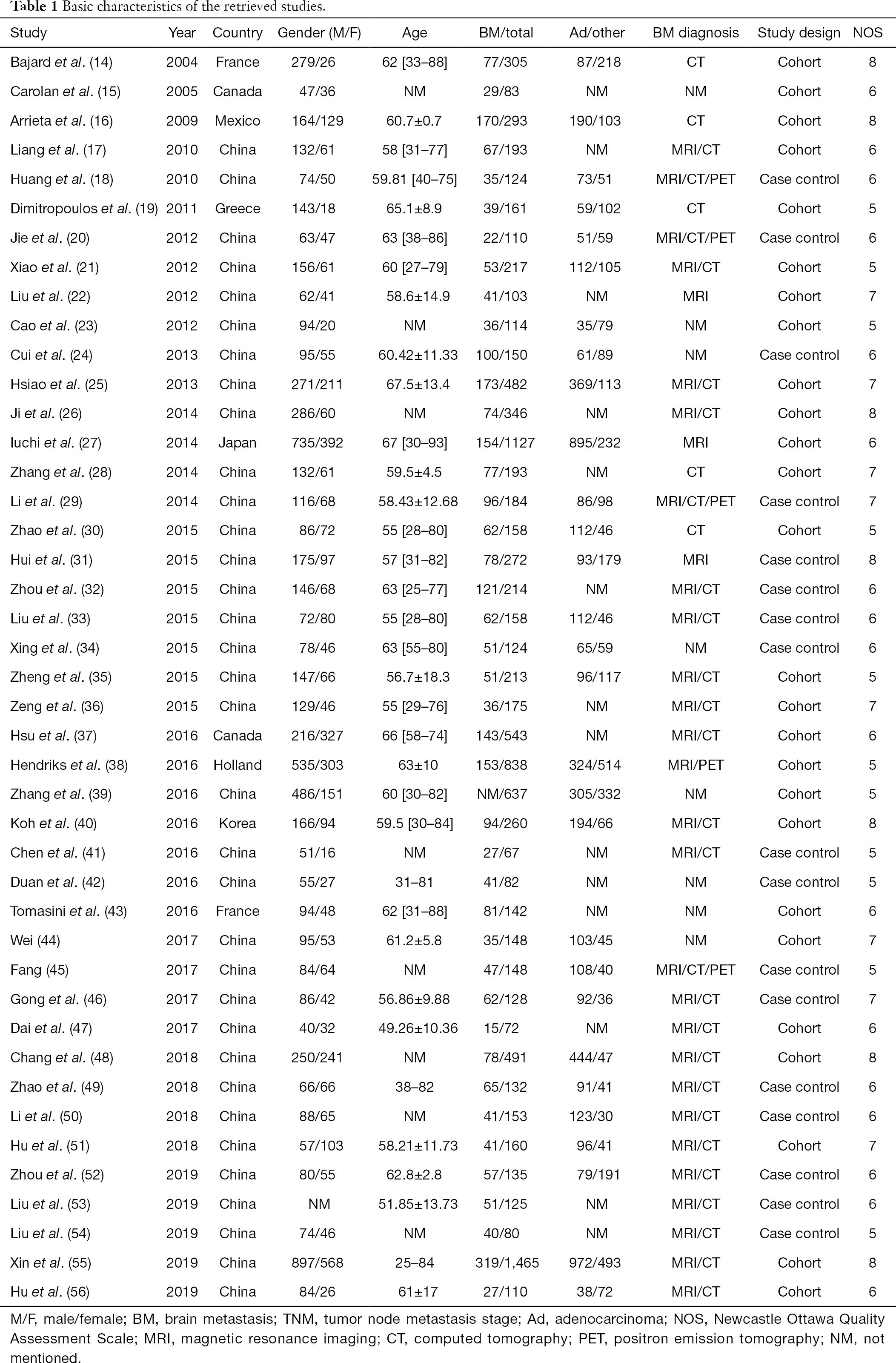 A meta-analysis of clinical characteristics of patients 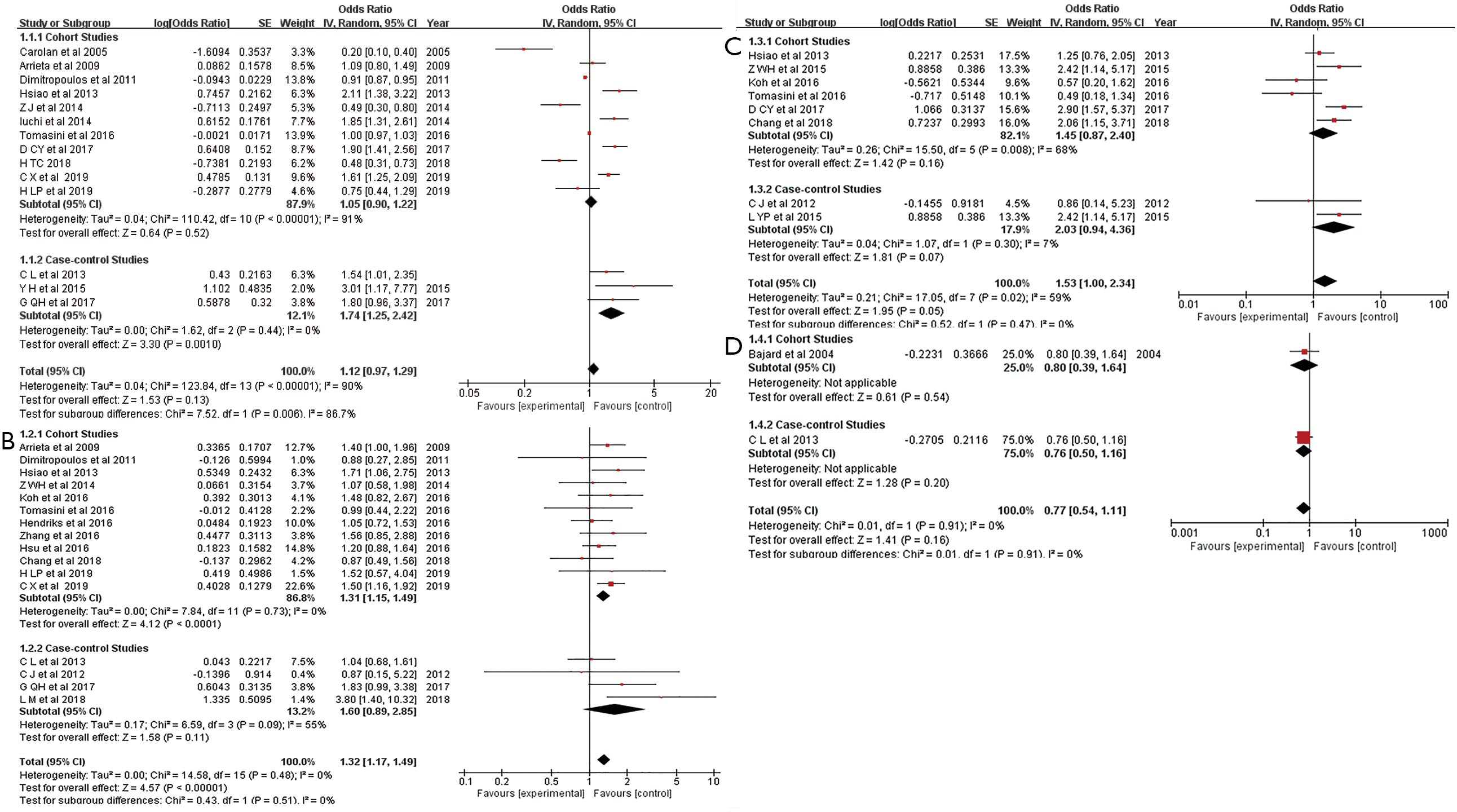 Figure 2 Meta-analysis of clinical characteristics. (A) Age younger than 60 years old, (B) gender is female, (C) a smoking history, (D) a treatment history.

A meta-analysis of tumor-related indexes 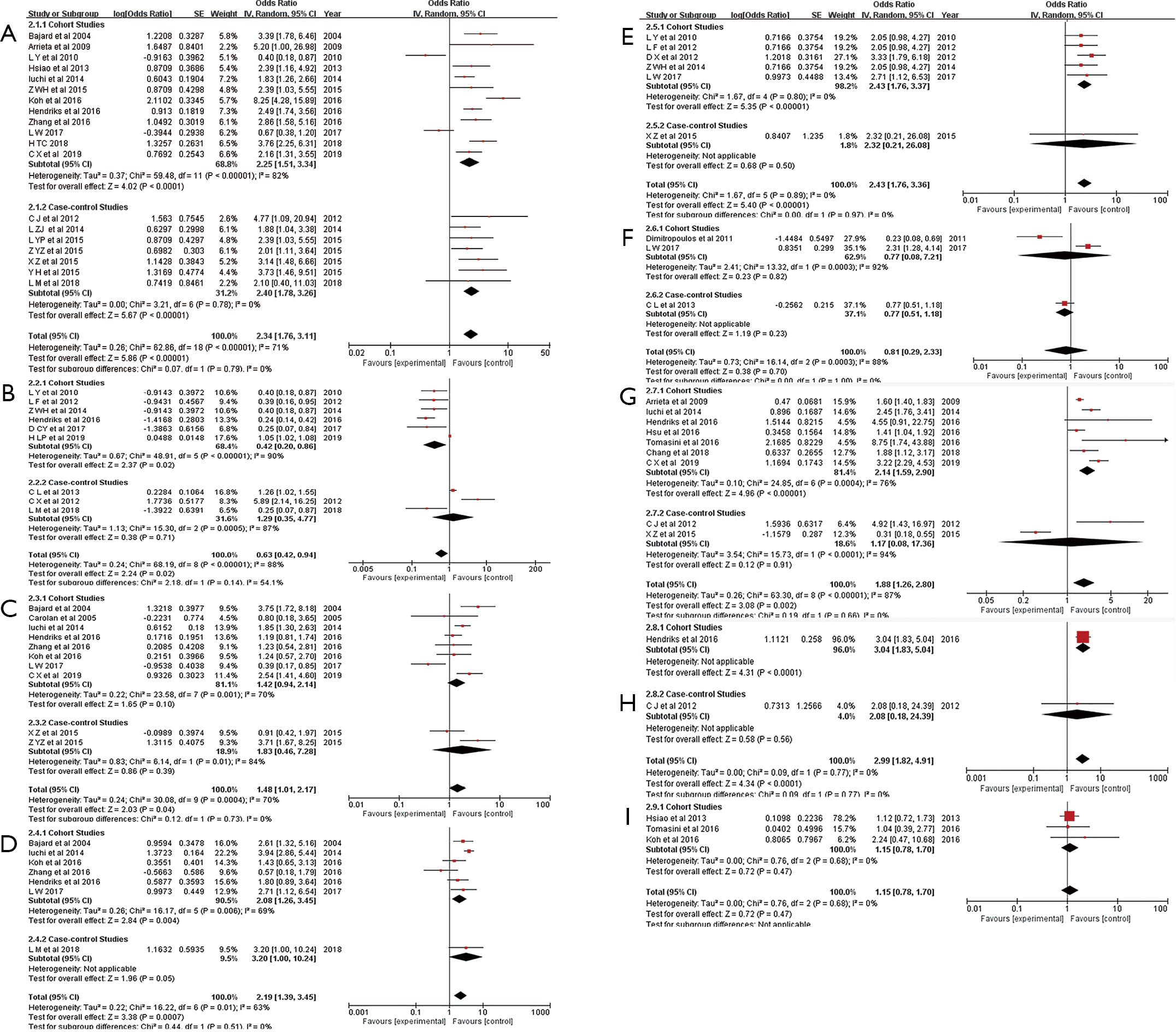 A meta-analysis of clinical laboratory parameters

Sensitivity analysis and risk of bias

The NOS Quality Assessment (Table 1) and GRADE evaluation (Figures 5,6) indicated that the included studies were of acceptable quality. A sensitivity analysis was conducted to evaluate each included study’s influence; the results showed that heterogeneity and the pooled ORs or WMDs of BM were not significantly altered by any single study, indicating that our conclusions were relatively reliable. Funnel plots were generated for the indexes and are shown in Figures S1-S3. Egger’s and Begg’s tests are shown in Figures S4,S5. 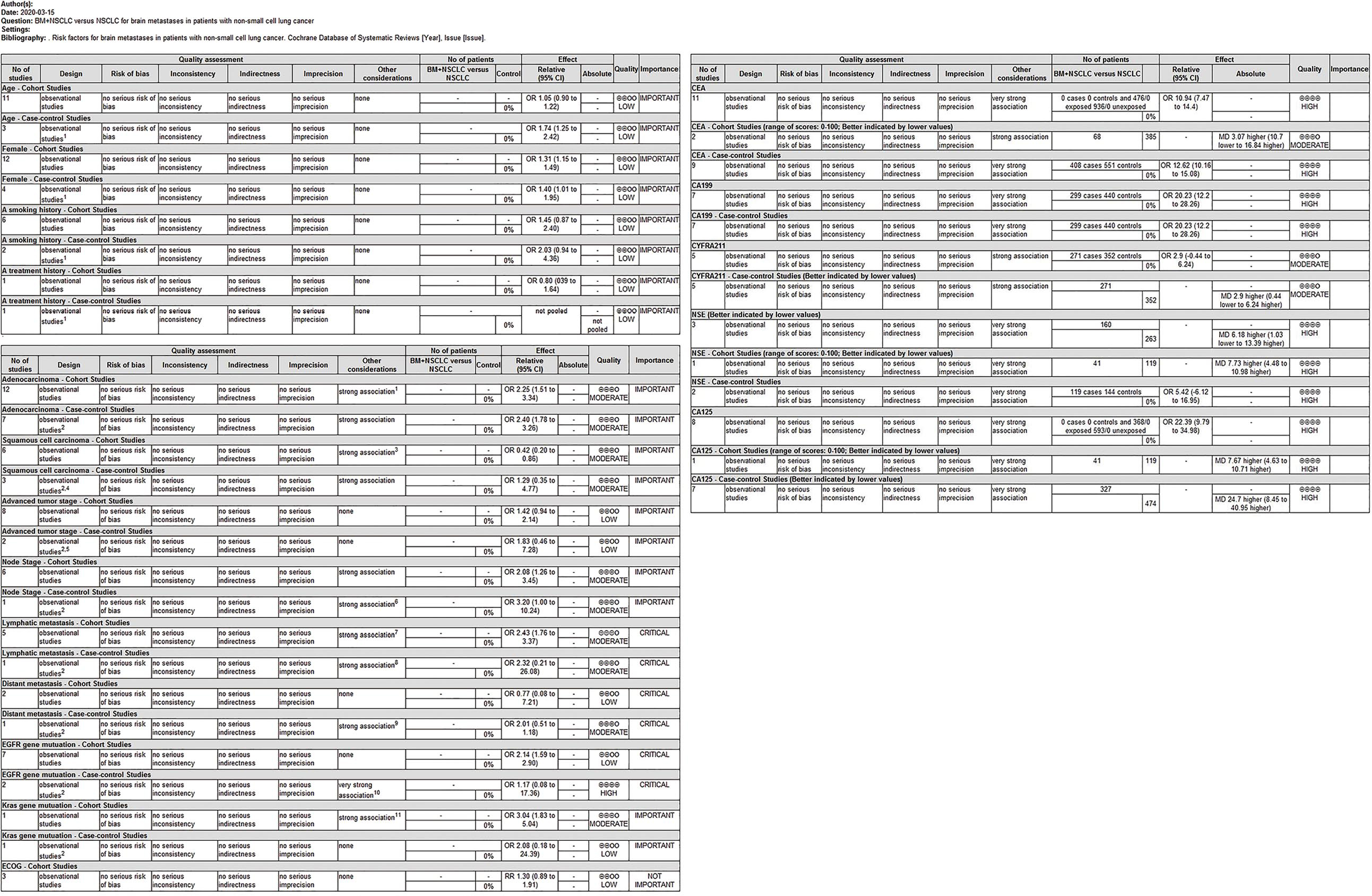 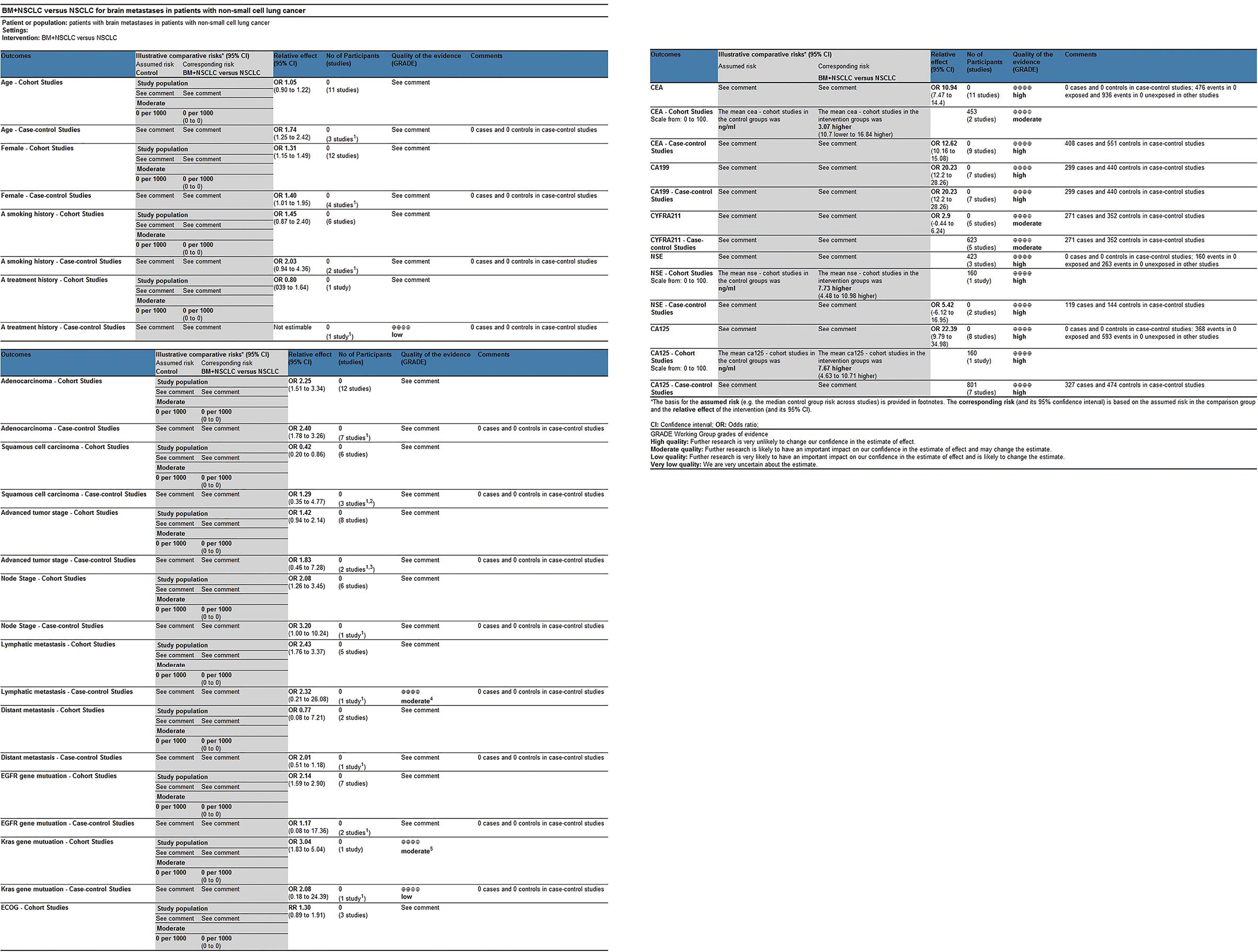 Our meta-analysis of 43 studies involving 11,415 participants assessed the risk factors and prognosis of BM in NSCLC patients. Our findings may be important in the prevention and evaluation of NSCLC patients with BM. The results were divided into four categories: clinical characteristics, tumor-related indexes, clinical laboratory parameters, and survival rates of patients.

Some multivariate analyses have already shown that the risk of BM is reduced with age; however, our meta-analysis found that age ≤60 years old was associated with BM’s incidence. The reason why an increased risk exists in the younger age cohort remains unclear; although, a possible mechanism for this may be due to the differential expression of some biological markers associated with BM, such as E-cadherin and Caspase-3, between younger and older patients (57). Also, it is well established that adenocarcinoma is common in females and often metastasizes to the brain, explaining why females have a higher incidence of BM (24). Moreover, a recent study (58) has demonstrated that the proportion of lung cancers diagnosed among smokers is increasing and that the risk of developing lung cancer is 20–40 times higher in smokers compared to never-smokers, which may explain the high proportion of smoking history in NSCLC patients with BM.

BM is closely associated with tumor-related indicators. In 2015, Won et al. (59) established a nomogram for predicting BM in NSCLC patients and found that histological type, T stage, and N stage were closely linked to BM. Similarly, Wang et al. (60) reported that non-squamous cell carcinoma and multiple lymphatic metastases were both risk factors for BM, consistent with the results of our study. We found that non-squamous cell carcinoma, especially adenocarcinoma, was an independent risk factor for BM, which may be attributed to adenocarcinoma’s invasive growth. Previous research (61) speculated that if a tumor spreads to the chest’s lymphatic system, it will also involve distant metastasis to other organs (including bone, liver, and kidney), and if distant metastasis occurs, the probability of BM will increase. Our study is consistent with these studies in identifying lymphatic metastasis as a significant prognostic factor. A previous meta-analysis involving 22 studies reported that patients with EGFR mutation were more susceptible to BM than those with wild type EGFR (OR =1.99, 95% CI: 1.59–2.48, P=0.000) (62). A possible mechanism for this may involve EGFR activating MET via protein kinases and activating STAT3 via interleukin-6 to promote BM in NSCLC (63,64).

Our study also found that the levels of relevant serum tumor markers were related to BM in NSCLC patients. We identified five prognostic factors: higher CEA levels, CA199, CYFRA211, NSE, and CA125. It has been previously reported that CEA-positive tumor cells can cross the blood-brain barrier more easily and adhere to the cerebral vasculature, which promotes the occurrence of BM (65). Our study also found that a higher level of CEA was a risk factor for BM. Meanwhile, previous studies (45,49) demonstrated that serum CEA, CA199, CA125, and CYFRA211 were higher in the BM group than the control group, providing an important reference for the early detection of BM in NSCLC patients.

The results of the cohort and case-control studies were also analyzed separately (Table 2). The statistical results reported in the cohort studies were consistent with the results of the case-control studies, except for smoking history, adenocarcinoma, squamous cell carcinoma, and higher tumor stage. Considering that cohort studies had a higher proportion and were more likely to be authentic, we believe that random-effects models were suitable for these four indexes. Moreover, the heterogeneity of all five serum tumor markers was significant (P<0.05), which may be attributable to a failure to publish studies with negative results or different means of measurement. After stratifying by study design, we found that there were only case-control studies for some indexes, and thus, further investigation is required to confirm the conclusion. 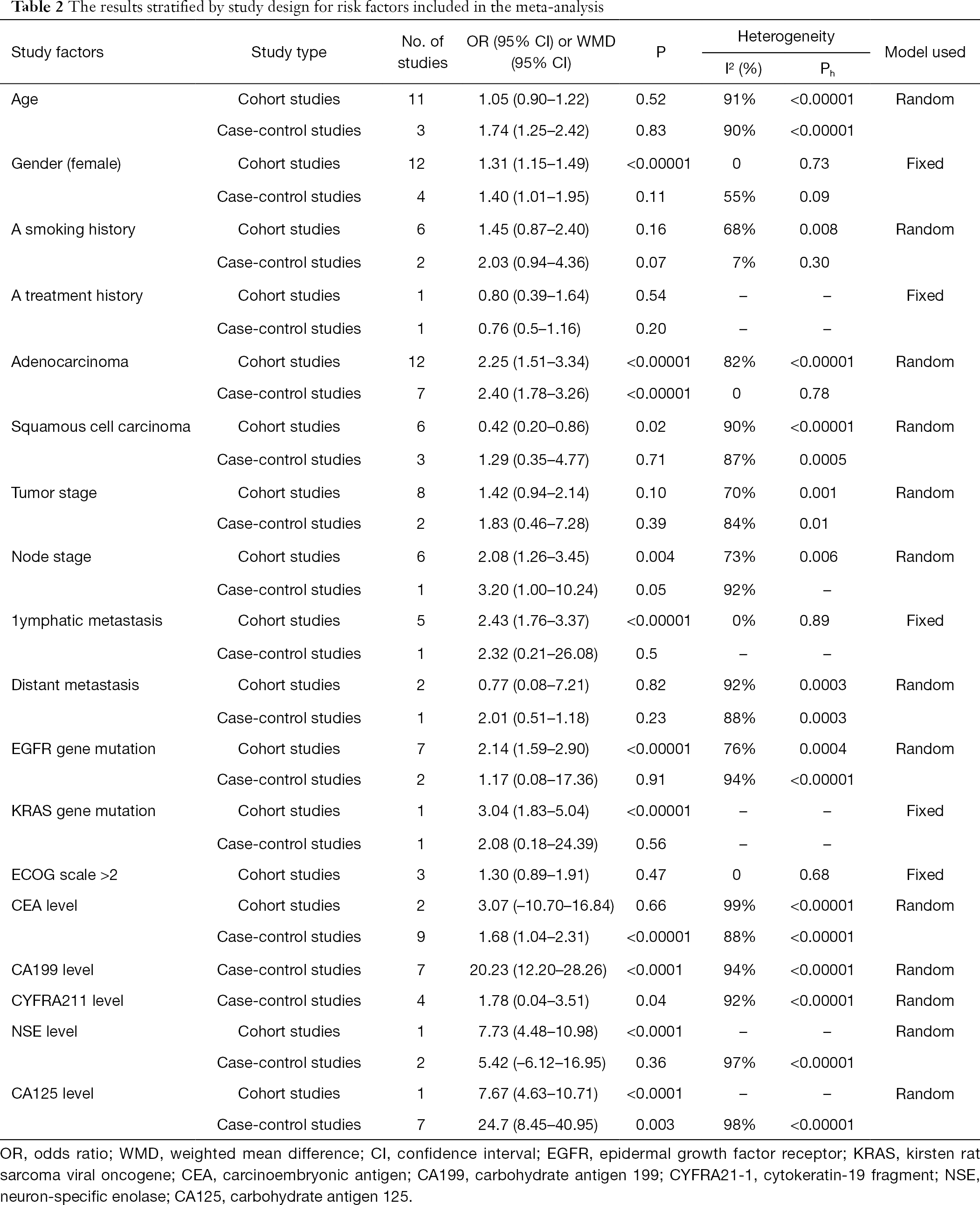 Our study had some shortcomings and omissions that should be noted. Firstly, the studies included in our meta-analysis were all either cohort or case-control studies, and the NOS quality assessment showed that the 43 included studies had relatively low scores (5-8), indicating that the results may have been subject to selection bias. Secondly, potential risk factors, such as cancer history, treatment approach, or other biological markers, could also promote BM’s occurrence and affect the prognosis of cancers. However, these factors were not explored in this meta-analysis because the included studies may not have provided the required information. Thirdly, funnel plots showed no obvious publication bias for indexes with more than 10 relevant studies; however, potential bias could not be completely excluded for indexes with fewer than 10 studies.

Since the novel coronavirus spread throughout China and worldwide, all authors rushed to the forefront of the fight against the virus. Missions in the heart, responsibility in the shoulder. We extend our sincere gratitude to the families of all authors and teachers and colleagues for supporting us during this difficult time.

Reporting Checklist: The authors have completed the PRISMA reporting checklist. Available at http://dx.doi.org/10.21037/apm-20-1722

Conflicts of Interest: All authors have completed the International Committee of Medical Journal Editors (ICMJE) uniform disclosure form (available at http://dx.doi.org/10.21037/apm-20-1722). The authors have no conflicts of interest to declare.