We present the following article in accordance with the TRIPOD reporting checklist (available at http://dx.doi.org/10.21037/apm-21-437).

Three hundred and fifty-eight AF patients with PDs receiving their first radiofrequency ablation between January 2008 and April 2015 were retrospectively reviewed in our centers. Inclusion Criteria is as follows: (I) receiving radiofrequency ablation as described previously (10,11). Briefly speaking, the ‘2C3L’ technique is performed with radiofrequency ablation method, which is a fixed ablation approach consisting of bilateral circumferential pulmonary vein antrum isolation (PVAI) and three linear ablation lesion sets across the mitral isthmus, left atrial roof, and cavo-tricuspid isthmus. The procedure was terminated by cardioversion unless a mappable organized atrial tachyarrhythmia was subject to further ablation until it is non-inducible with burst pacing at 200 ms. (II) With PDs diagnosed according to information provided by the patients, their medical records, and examinations (i.e., chest X-ray photography, pulmonary function test, lung computed tomography, etc.). (III) With age more than 18 years old. AF patients were excluded from this study if they were complicated with acute myocardial infarction or untreated thyroid dysfunction. The study was conducted in accordance with the Declaration of Helsinki (as revised in 2013). Approval was obtained from the ethics committee of Beijing Tongren Hospital, Capital Medical University (No.: TRECKY2020-097) and individual consent for this retrospective analysis was waived.

After excluding 54 patients (15.08%) without follow-up information, 304 AF patients complicated with PDs were analyzed in the final study, including 189 patients with COPD, 63 with pulmonary tuberculosis, 5 with recurrent pulmonary embolism, 23 with interstitial lung fibrosis, and 24 with other PDs (e.g., 14 lung cancer after lung resection, 7 bronchiectasis, and 3 asbestosis). These patients were divided into AF recurrence group and no AF recurrence group.

Seven scores predicting AF recurrence were analyzed in the current study. The exact definition of the BASE-AF2 score (4), the HATCH score (5), the APPLE score (6), the CHADS2 score (7), the CHA2DS2-VASc score (7), the MB-LATER score (8) and the CAAP-AF score (9) were listed in Table S1 and as follows. 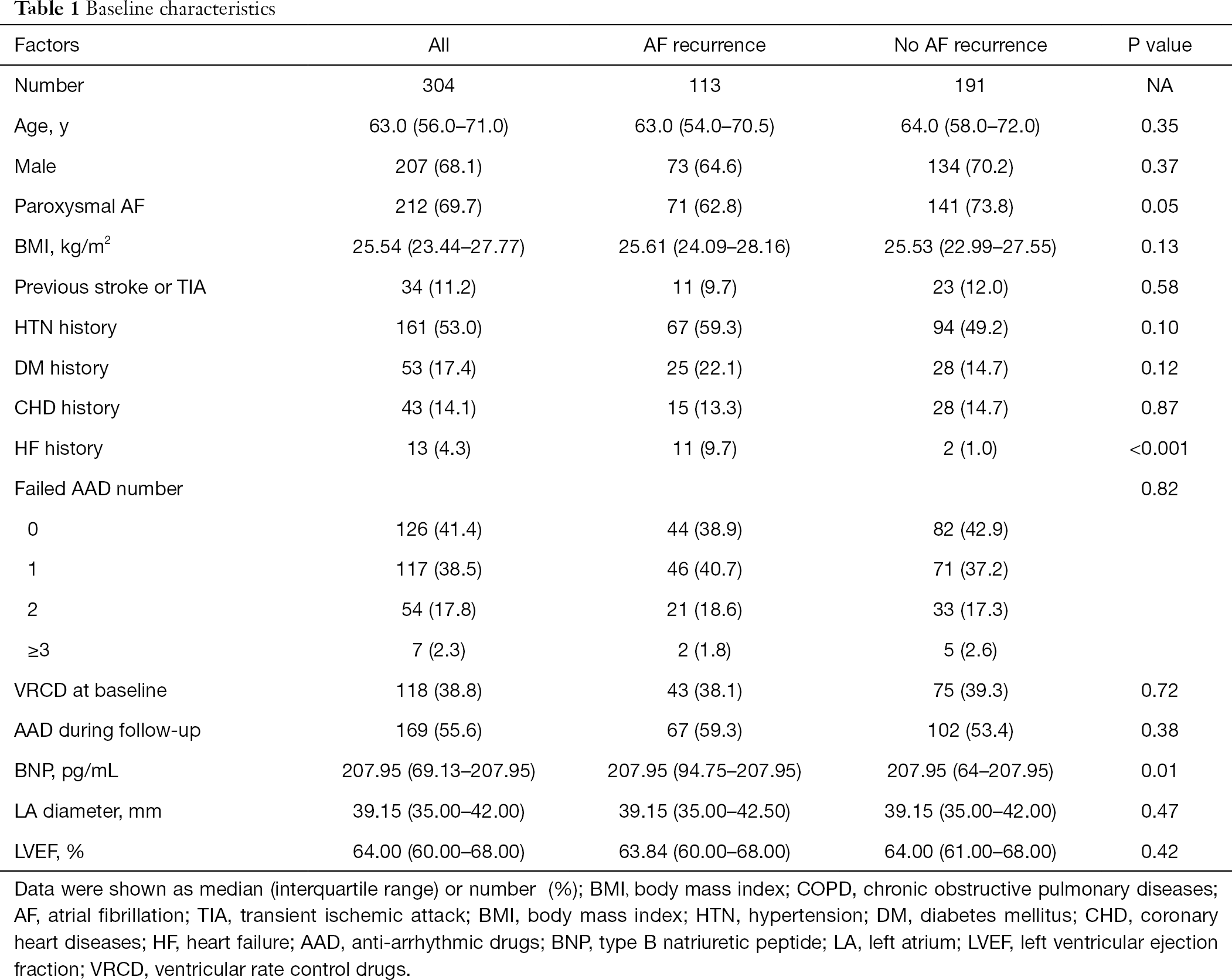 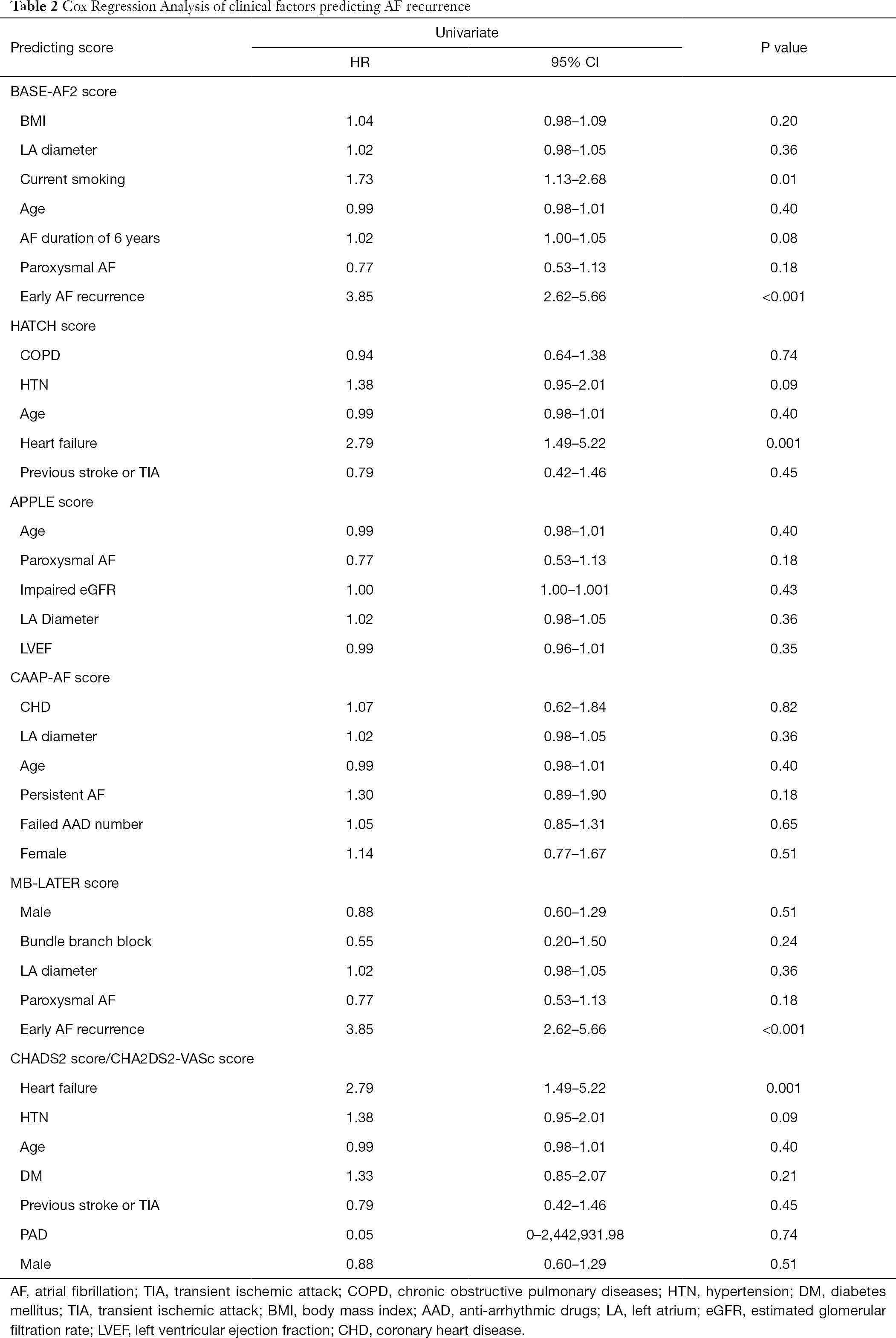 The BASE-AF2 score had a significantly higher c-index than the MB-LATER, APPLE, CHADS2, CHA2DS2-VASc, CAAP-AF, and HATCH scores (all P<0.05). The optimal point for predicting AF recurrence of the BASE-AF2 score in the ROC analysis was 1 point with sensitivity of 69.03% and specificity of 60.21%. The MB-LATER score had a relative higher c-index than the APPLE score and CAAP-AF scores for prediction of AF recurrence. There was no significant difference among the other scores (Figure 1). 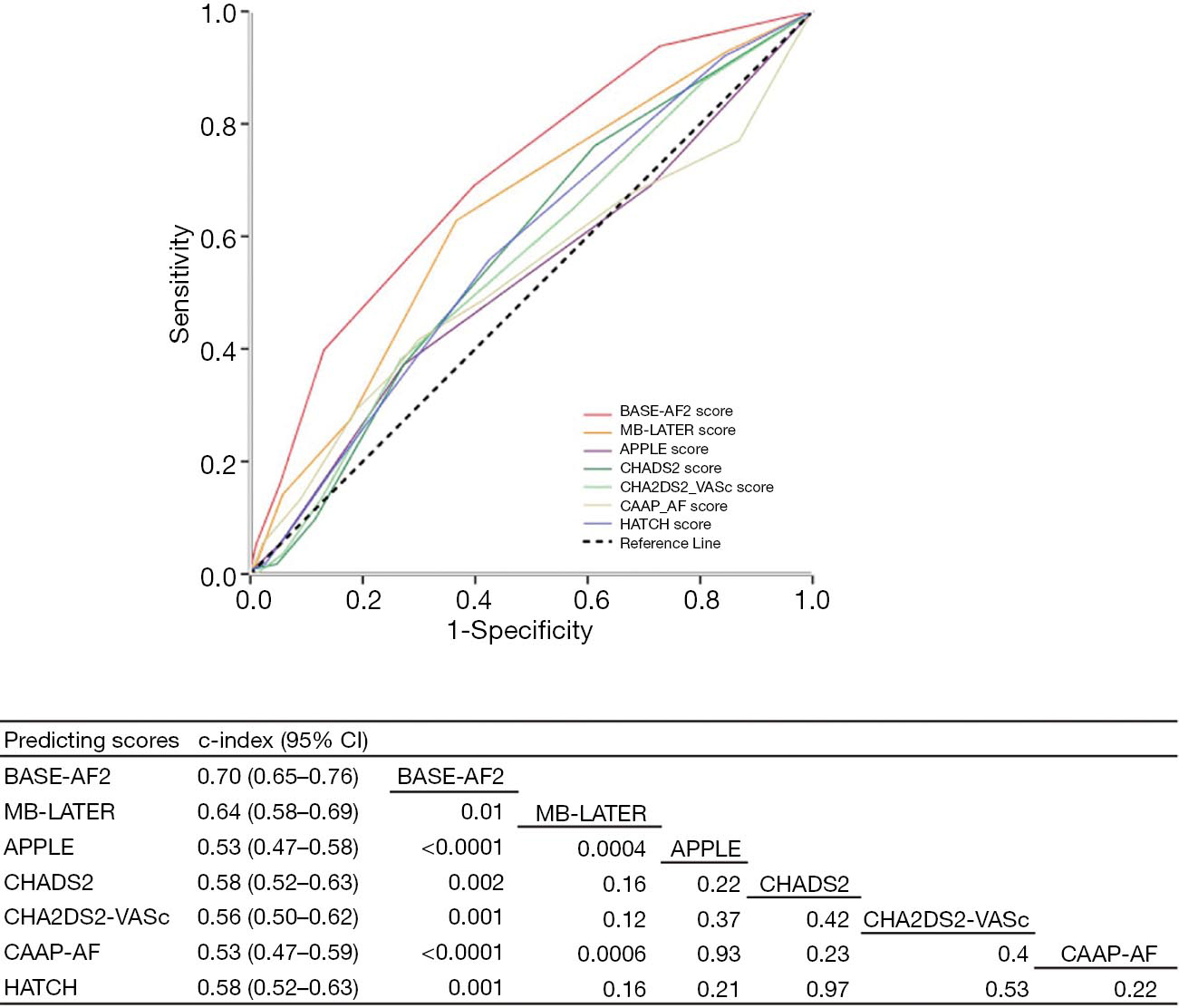 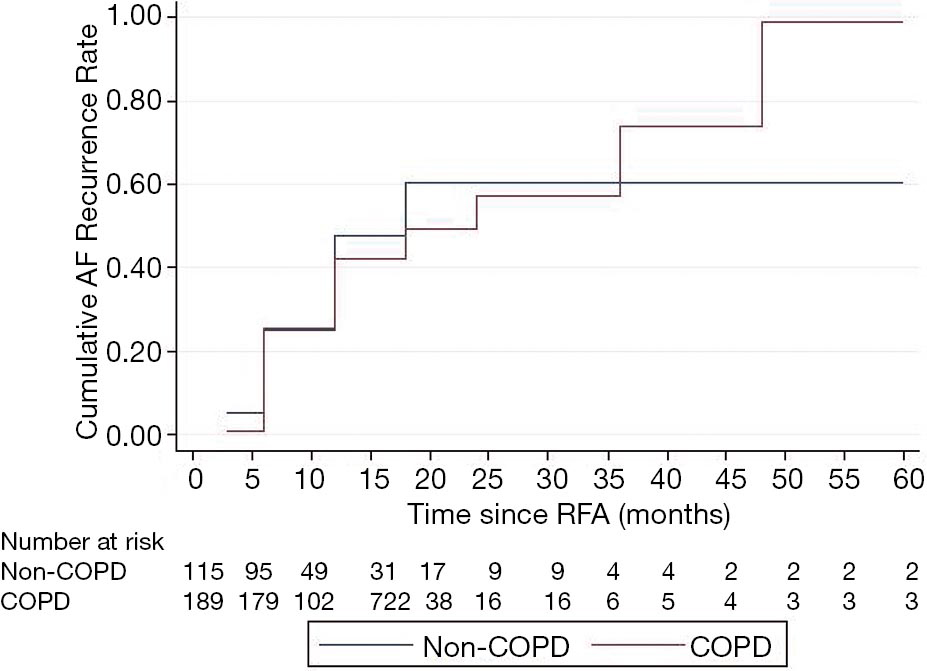 In this study, the important finding is that HF history, current smoking and early recurrent AF among clinical factors involved in the prediction scores were found to be significantly related to late recurrent AF following catheter ablation when analyzed in univariate Cox regression model. The further analysis showed that the predicting ability of BASE-AF2 score was superior to the MB-LATER, APPLE, CHADS2, CHA2DS2-VASc, CAAP-AF and HATCH scores when comparisons were made in patients with concurrent AF and PDs.

To our knowledge, this is the first study validating these predicting scores in AF patients with PDs, a large group of patients in many centers may not consider for ablation. Nonetheless, some controversies were shown compared with previous studies. The APPLE score was shown to have a relatively high prediction value in the general population (6,8). Though HF history was shown significantly related to AF recurrence, LVEF was not related to late AF recurrence in patients with PDs. HF with preserved LVEF was supposed as possible explanations for this controversial phenomenon. Therefore, the APPLE score including LVEF, not congestive HF had relatively lower predicting value compared with the HATCH, CHADS2 and CHA2DS2-VASc scores which take HF as risk factors, though no statistically significant differences among them in this study. Actually, these patients with both AF and PDs were associated with worse outcomes after AF ablation because PDs could be the underlying disease leading to AF (1). The PDs was not resolved even if the AF ablation was performed, which made AF hardly treated. Another possible reason to explain the worse performance in these patients was that AF patients with PDs had somewhat different characteristics. As LA was one important factor involved in most of the scores (12), but right atrial diameter was neglected which was more often affected by the PDs, which contribute a lot to the recurrent AF after ablation (13).

Initially, the HATCH score was explored for predicting risk of paroxysmal AF progressing to persistent AF. COPD was one kind of PDs, which was independently involved in the HATCH score. However, the HATCH score was shown to have a relatively low c-index in predicting AF recurrence in the current cohort. Moreover, whether COPD had a different effect compared with other kinds of PDs (non-COPD) on the outcome of RFA was unclear. In the current study, no impact of COPD on the outcome of RFA was seen using univariate Cox regression analysis and the result was further confirmed by comparing AF free rate between COPD and non-COPD using Kaplan-Meier analysis.

There are several limitations to be mentioned for this study. First, COPD patients constitute 62.17% of the study group. Thus, the results of the study are largely driven by the COPD patients which limits generalization of the study findings. However, COPD patients accounting for the majority of the study has minimized the possible heterogeneity caused by PDs contributing to outcomes post ablation. Second, the PDs status were hardly accounted for as no uniform indicator was available for each kind of PDs, though the incorporation of PDs stratification stage may possibly provide added value, which is hardly obtained for the current analysis. Third, many episodes known as asymptomatic AF could be neglected by the patients and hardly recorded, which raises significant concern about the validity of the findings, though ECGs and Holter were performed whenever possible during each follow-up. Fourth, patient-reported PDs history were also included in the study, however, examinations such as chest X-rays was used for adjudication during in-hospital stay, which increased the robustness of the diagnosis. Moreover, the studied PDs cohort is very selective and not representative of a wider AF population. However, this study proved that the BASE-AF2 score was useful in predicting AF recurrence following ablation in a specific PDs cohort with histories of mild to severe PDs. Fifth, patients with acute myocardial infarction were excluded and baseline CHD was balanced to minimize the influence caused by cardiovascular risk before ablation, as the ‘success’ of the procedure is likely to be significantly affected. Sixth, even if the topic was very useful and important, it is not easy to validate the scores in the patients with concurrent AF and PDs, as these patients are not usually treated with catheter ablation, which might lead to the source of bias and limit the generalizability of the findings. Therefore, even if the analysis was based on a solid analytic process, a larger confirmation of their results is still needed due to the relatively small number of patients presented in the current study. Seventh, as known by everyone, all the scores are shown overall modest predictive performances as risk scores have a limited power in predicting clinical events in AF patients. Indeed, it is necessary to integrate the scores in the current clinical evaluation of patients, but not substitute the physicians' clinical decision process. Eighth, several scores were not validated in the current analysis because such data were available only for part of the patients, such as left atrial size in the ALARMEc score and left atrial volume in the ATLAS score.

Our results showed that HF history, current smoking and early recurrent AF among clinical factors involved in the prediction scores is related with late recurrent AF post catheter ablation. Moreover, The BASE-AF2 score had higher predicting values than the MB-LATER, APPLE, CHADS2, CHA2DS2-VASc, CAAP-AF and HATCH scores in identifying recurrent AF after ablation when used in patients with concurrent AF and PDs, which can be an effective and helpful score for making AF treatment decisions.

Reporting Checklist: The authors have completed the TRIPOD reporting checklist. Available at http://dx.doi.org/10.21037/apm-21-437

Conflicts of Interest: All authors have completed the ICMJE uniform disclosure form (available at http://dx.doi.org/10.21037/apm-21-437). Dr. José Miguel Rivera-Caravaca has received a grant from Sociedad Española de Trombosis y Hemostasia (grant for short international training stays 2020) and the First Contact Initiative Grant 2020 from the European Society of Cardiology Council on Basic Cardiovascular Science. The other authors have no conflicts of interest to declare.

Ethical Statement: The authors are accountable for all aspects of the work in ensuring that questions related to the accuracy or integrity of any part of the work are appropriately investigated and resolved. The study was conducted in accordance with the Declaration of Helsinki (as revised in 2013). Approval was obtained from the ethics committee of Beijing Tongren Hospital, Capital Medical University (No.: TRECKY2020-097) and individual consent for this retrospective analysis was waived.