Diffuse large B cell lymphoma (DLBCL) is the most common subtype of non-Hodgkin lymphoma (NHL) and accounts for 30–40% of all cases worldwide (1). The quality of life including the incidence rate of depression has become an essential criterion when evaluating the effect of therapy (2-4). Growing evidence shows that depression interacts with immunity (5,6). However, the relationship between depression and immunity among DLBCL patients has not been investigated, despite reports indicating that patients with DLBCL often suffer from depression (7).

Immunity is also closely related to age and therapies. For instance, aging usually leads to reduced immunity (11,12), and common chemotherapy treatments include immune modulators such as rituximab, which may influence immunity through crosstalk among immune cells, including natural killer (NK) cells and dendritic cells (DCs) (13,14). Moreover, many DLBCL patients are also infected with HIV, which can significantly influence their immunity (14).

Hence, to precisely describe the relationship between depression and immunity, mixed factors, such as age and treatment type, should be excluded. The immune parameter should also be accounted for before the study is initiated (15).

The relationship between depression and immunity has been investigated previously (15). However, the results, mainly based on T cell subtypes and NK cells, are controversial. T lymphocyte subtypes may exhibit different functions depending on the examination method, which has led to findings indicating that patients have both suppressed and activated immune activity. Therefore, it is necessary to identify new parameters to measure the relationship between depression and immunity.

Immunosuppressive acidic proteins (IAPs) have been shown to be able to suppress a variety of immune responses, including cell-mediated and humoral immunity (16). In a previous study, we found that IAP served as a prognostic factor that was associated with depression among patients with solid tumors, which indicates that this protein may represent a sensitive biomarker to predict depression (15). Recent studies have also described methods to quantify immune cells, such as absolute lymphocyte count (ALC) (17,18) and the neutrophil-lymphocyte ratio (NLR) (19), which can be used as immune parameters to predict risk of disease. In particular, immune impairment has been associated with a decrease in ALC and an increase in the NLR. However, whether these immune parameters are also associated with depression requires further investigation in DLBCL patients.

Although we have reported the relationship between NLR/IAP and depression in older patients with advanced colorectal cancer, due to the huge difference between blood tumor and solid tumor, it is of great interest and importance to evaluate this in patients with diffuse large B-cell lymphoma. Thus, to precisely describe the relationship between depression and immunity in patients with DLBCL, our exploratory study enrolled middle-aged DLBCL patients without HIV at diagnosis. All patients received standard R-CHOP (cyclophosphamide, doxorubicin, vincristine, prednisone plus rituximab) chemotherapy, and were examined with traditional immune parameters, including the frequencies of cluster of differentiation (CD)3-positive (CD3+), CD4+, NK, and CD56+ cells, as well as novel immune parameters, such as IAP, ALC, and NLR.

We present the following article in accordance with the STROBE reporting checklist (available at http://dx.doi.org/10.21037/apm-21-601).

The study was conducted in accordance with the Declaration of Helsinki (as revised in 2013). The study was approved by the Medical Ethics Committee of Changzheng Hospital and informed written consent was obtained from all participants.

The methods used were described previously and underwent little modification (15). Our study population consisted of 82 patients, including 42 male and 40 female DLBCL patients between March 1, 2003, and March 1, 2009, at the Hematology and Oncology department of Changzheng Hospital. Patients who received chemotherapy, radiotherapy, stem cell transplantation or surgery during the preceding month were excluded. Patients had no mental illness, uncontrollable cardiovascular or cerebrovascular diseases. The inclusion criteria consisted of an age between 45 and 64 years, HIV-negative status and histologically confirmed de novo DLBCL. A complete blood count (CBC), including the ALC; NLR; frequencies of CD3+, CD4+ and CD8+ cells; and level of IAP was obtained at the time of diagnosis prior to the commencement of therapy.

The flow cytometric analysis was performed using the method described previously without modification. For immunophenotypic characterization of NK cells and T lymphocyte subsets cells, the following antibodies were used: CD56+ (APC), CD3+ (PE), CD4+ (FITC) and CD8+ (Percy 5.5). To detect the cell phenotype, cells were fixed and washed according to methods described previously. EPICS Altra (Beckman Coulter, Luton, UK) was used for flow cytometry analysis of antibody-labeled cells. Fifty thousand gate events were collected for each sample, and isotype-matched antibodies were used to determine binding specificity. Based on the forward and side scattering characteristics necrotic cells were excluded from the analysis.

It is routine policy in our laboratory to obtain a CBC immediately following the decision to proceed with an intervention after a DLBCL diagnosis. The automated Cell Dyn 4000 (Abbott, Santa Clara, Calif., USA) system was used to measure the ALC and NLR.

An IAP kit was the same kit used in the previous study (15). To determine the IAP levels, a single immune agar diffusion assay was adopted.

General condition of the patients

From 2003 to 2009, 82 consecutives primarily diagnosed DLBCL patients treated with R-CHOP and followed up at the oncology and hematology departments of Changzheng Hospital were included in this study. The median age at the time of diagnosis in this study of 82 DLBCL patients was 54.6 years (range, 45–64 years). Other baseline patient characteristics is shown in Table 1. 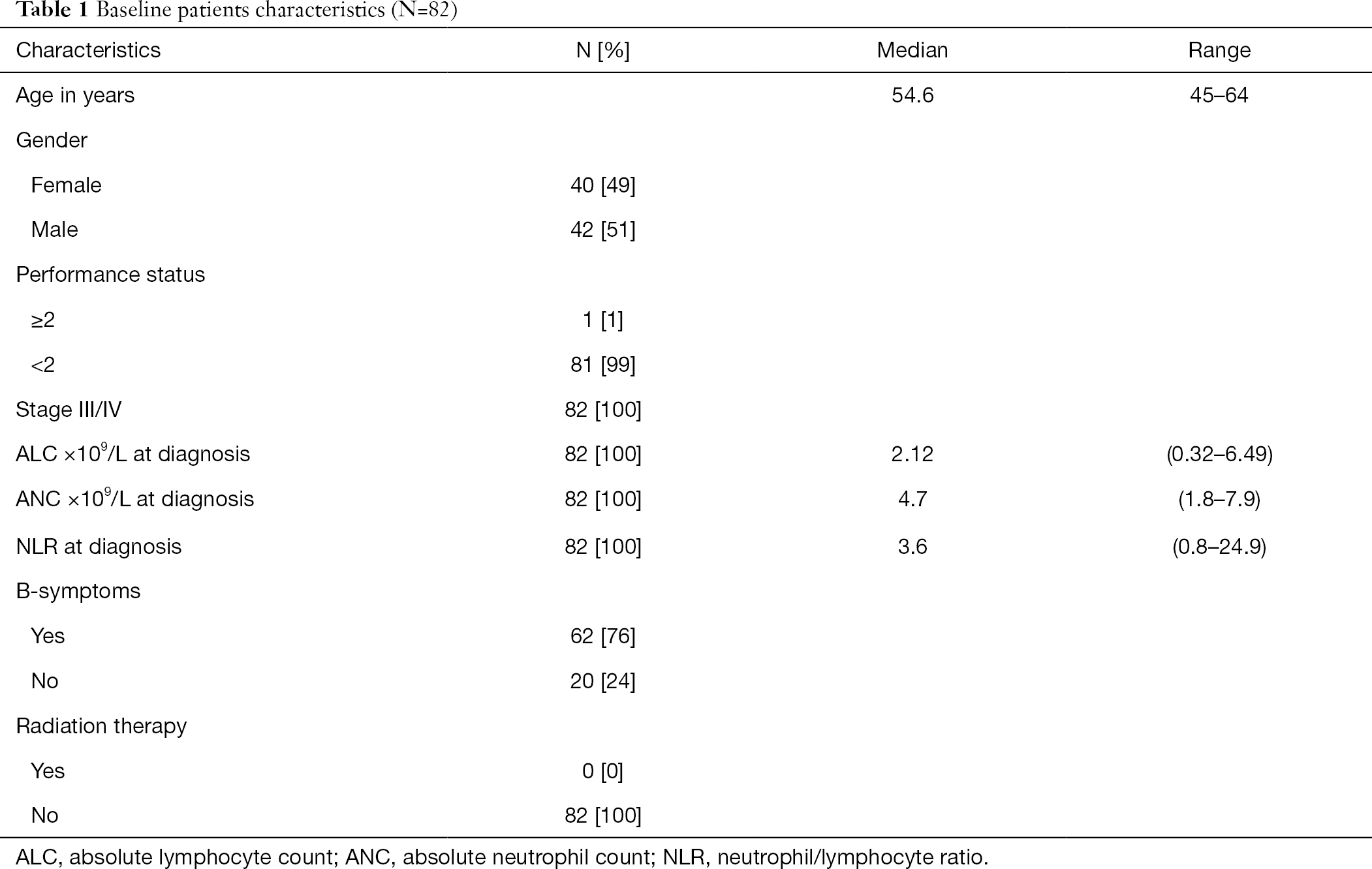 A comparison of immune markers between depressed and nondepressed patients is shown in Table 2. According to the Zung SDS, 30 patients (36.5% of all subjects) were placed into the depressed group, while the remaining 52 patients were assigned to the nondepressed group (Table 3).

The relationship between age, gender, stage, immunity, and SDS score

Depression has prognostic significance in a variety of cancers and the prognostic role of it cannot solely explained by the psychosocial stress. It has been noted that, among different cancers, various biological factors may also contribute to the depression (20,21). Our group is one of several focusing on the relationship between depression and immunity. However, the associations between depression and immunometabolic functioning still remain unclear and may depend on depression symptom profiles (22). Reports have shown that depressed patients exhibit reduced immune cell proliferative responses and impairment in innate and adaptive immunity (23-25), while immune activation, as evidenced by immune cell proliferation and high level of proinflammatory cytokines, such as IL-6, TNF-α, and C-reactive protein (CRP), has also been reported among patients with depression (26,27).

There are two factors may account for the inconsistencies in previous studies. The first relates to the use of different experimental methods. As mentioned above, many factors complicate the relationship between depression and immunity, including treatment and age. Therefore, to explore the relationship between depression and immunity, we excluded potential confounding factors by enrolling middle-aged primarily diagnosed patients. In particular, we found that 36.5% of enrolled DLBCL patients displayed symptoms of depression which is consistent with many other reports. Mitchell et al. reported 34.1% adults with hematological cancer inflicted with depression (28); Andrykowski et al. reported that during treatment, nearly 35% hematological cancer patients suffer from depression (29); and Prieto et al. reported a depression prevalence of 44.1% among patients with hematological cancer (30).

Another reason for the inconsistency in previous studies may be related to differences in the function of T cell subsets. Cell functions are determined according to the expression of membrane surface proteins, including those termed CD markers. However, the function of T cell subtypes expressing the same CD marker can differ in traditional assays. For example, CD4+ T cell subsets can play both immune-supporting roles, associated with the expression of CD3 and CD4, and immunosuppressive roles, associated with the expression of CD4, CD25, and FOXP3 (31). Notably, the characteristics of DLBCL include some T lymphocyte subtypes with aberrant expression of T cell–associated antigens (32-34) and co-expression of two or more markers such as CD4 and CD8 has been reported in the peripheral blood of DLBCL patients (32,35). However, our study did not find significant changes in T subtypes, such as in CD3+, CD4+, CD8+, and NK cells, between depressed and nondepressed patients, which may be due to the aberrant expression of T antigens in the peripheral blood of DLBCL patients.

The ALC has been reported as a prognostic factor for survival in patients with DLBCL both at diagnosis (36-39) and at the time of first relapse (40). As a surrogate marker of host immunity, a decreased quantity of T lymphocytes has been shown to be associated with immune impairment. In the present study, the ALC was used as an immune parameter to investigate the relationship between depression and immunity. However, the present study did not demonstrate a significant difference in ALC between depressed and nondepressed patients.

Notably, we observed that the NLR was positively associated with depression and that the NLR differed significantly between the depressed and nondepressed groups. The rationale for using NLR was to compare the inflammatory response (i.e., neutrophils) generated in response to cancer with host immunity (i.e., lymphocytes) (41). Emerging evidence suggests that an elevated NLR is associated with shorter survival among patients with DLBCL and poor prognosis among patients with advanced DLBCL who are treated with R-CHOP (34). The results of the present study indicate another important role for the NLR, in that it may serve as a useful parameter with which to predict the incidence of depression.

Another important immune parameter is IAP, which was correlated with depression among patients with solid tumors. In the present study, we found for the first time that IAP was closely associated with depression among middle-aged DLBCL patients. An IAP level >580 µg/ml typically indicates impairment of the host immune response. In patients with solid tumors, IAP is also a direct tumor marker (42) that has been shown to play an important role in the screening (43), diagnosis, staging, and assessment of treatment effects (44), as well as the selection of treatment method (42).

In conclusion, our study is the first to demonstrate altered immune function among depressed DLBCL patients. Moreover, the baseline serum levels of IAP and the NLR seem to be objective parameters with which to predict the incidence of depression in middle-aged DLBCL patients treated with immune-chemotherapy. Nevertheless, however, this study is not without limitations. We evaluated a limited sample size, and longitudinal studies will therefore be necessary to further confirm our research. In addition, our present study was solely focused on middle-aged DLBCL patients, and thus our conclusions may not be generalizable to early-stage patients or to elderly patients with other types of cancers.

The authors thank all the member of the team who contributed to this study and all researchers working in this field.

Funding: This study was funded by National Natural Science Funds (no. 81102284).

Reporting Checklist: The authors have completed the STROBE reporting checklist. Available at http://dx.doi.org/10.21037/apm-21-601

Conflicts of Interest: All authors have completed the ICMJE uniform disclosure form (available at http://dx.doi.org/10.21037/apm-21-601). The authors have no conflicts of interest to declare.

Ethical Statement: The authors are accountable for all aspects of the work in ensuring that questions related to the accuracy or integrity of any part of the work are appropriately investigated and resolved. The study was conducted in accordance with the Declaration of Helsinki (as revised in 2013). The study was approved by the Medical Ethics Committee of Changzheng Hospital and informed written consent was obtained from all participants.