Neoadjuvant treatment of pembrolizumab plus platinum-doublet chemotherapy in stage IIIA squamous cell carcinoma of the lung: a case report

Worldwide, lung cancer has shown the highest incidence and mortality in recent years, accounting for 11.6% of 18.1 million new cases and 18.4% of 9.6 million deaths (1). Non-small cell lung cancer (NSCLC) is the main type of lung cancer, which includes lung adenocarcinoma (LUAD) and lung squamous cell carcinoma (LSCC), with the former predominating (2). In terms of disease characteristics, LUAD mainly occurs in oncogenic driver mutations (e.g., KRAS, EGFR, BRAF, or ERBB2), rearrangements (e.g., ALK, ROS1, RET, NRG1, or one of the NTRK genes), or structural alterations (e.g., in MET with exon 14 skipping) (3,4). Thus, targeted drug therapy has been designed for it. Unlike LUAD, LSCC is characterized by frequent mutations in the PI3K growth factor signaling pathway and in tumor suppressor genes such as TP53 and CDKN2A (5,6) instead of oncogenic driver mutations and rearrangements.

Among the cases of NSCLC, accounting for approximately 30% are stage III patients who have large or metastatic lymph nodes in the mediastinum, and the location of tumor is usually localized in the thoracic cavity (7). The 5-year survival for stage III NSCLC patients ranges from 36% to 13% (IIIA 36%; IIIB 26%; IIIC 13%) (8), and is lower for stage IV patients. Compared with stage I–II patients and partial IIIA patients who can be treated surgically, chemotherapy is the most suitable for stage IIIB–IV patients. Pembrolizumab, given either alone or in combination with platinum-based chemotherapy, remains a standard first-line treatment for advanced LSCC in clinical practice (9). Pembrolizumab is a humanized IgG4 antibody targeting PD-1. Pembrolizumab is provided intravenously, with a mean half-life of 26 days. Common immune-mediated side effects include pneumonitis, colitis, hepatitis, adrenal insufficiency and so on (10). Tumor proportion score (TPS) was defined as the proportion of effective tumor cells with partial or complete membrane staining at any staining intensity.

According to the American Society of Clinical Oncology (ASCO)and European Society for Medical Oncology (ESMO) guidelines, standard cytotoxic platinum-based doublets are used both for patients with non-squamous or squamous histology without positive biomarkers and programmed death ligand 1 (PD-L1) tumor proportion score (TPS) ≥50%. For patients without positive biomarkers but with a PD-L1 TPS ≥50%, pembrolizumab monotherapy is recommended. As a second-line treatment, pembrolizumab is also authorized for patients with a PD-L1 TPS ≥1% (11-14).

However, during the KEYNOTE-407 trial (15), treatment with pembrolizumab plus carboplatin and paclitaxel proved more effective than chemotherapy alone, even for patients with negative expression of PD-L1 (TPS <1%). Thus, we report a case of related treatment for advanced LSCC. We present the following article in accordance with the CARE reporting checklist (available at http://dx.doi.org/10.21037/apm-21-335).

A 64-year-old elderly male suddenly had cough and expectoration with blood-stained sputum 2 months prior to presentation, without other discomfort. He had a medical history of diabetes mellitus, hypertension and coronary heart disease, etc., as well as smoking two packs of cigarettes daily for 40 years. According to chest computed tomography (CT) scan, there was a solid lesion about 4.5 cm in diameter in the left hilar, with left hilar and mediastinal lymphadenopathy but without distant metastasis (Figure 1A,B,C). Fiberoptic bronchoscopic biopsy confirmed squamous cell carcinoma (SCC) (Figure 1D,E). The patient was staged as T2bN2M0 (IIIA). 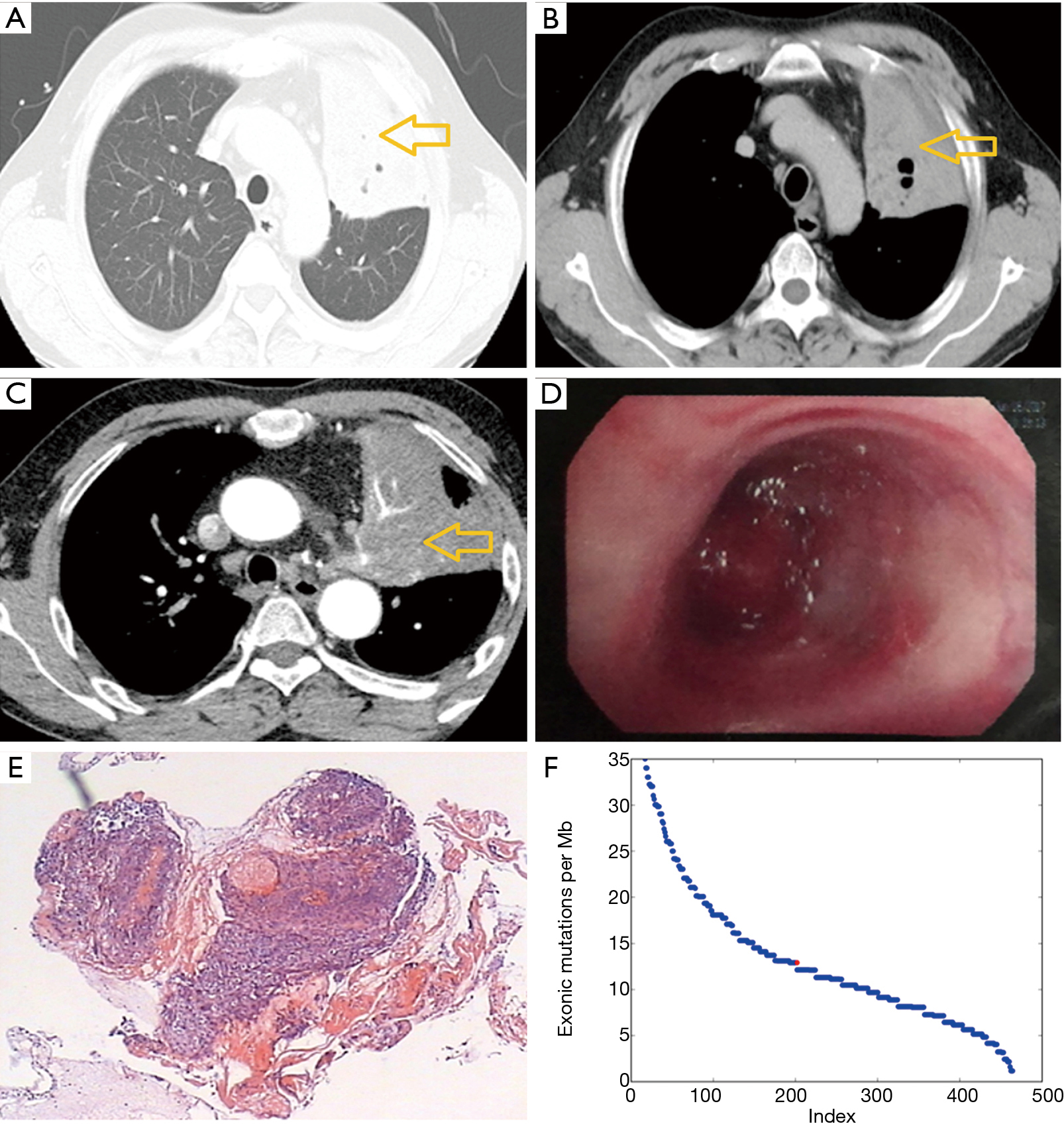 However, the Tumor Mutation Burden (TMB) rank was lower than 43% of LSCC patients (Figure 1F). And the results of genetic testing, including oncogenic driver mutations (KRAS, EGFR), rearrangements (ALK, ROS1, RET) and structural alterations (MET), and the expression of PD-L1 were negative (Figure 2). Based on the principle of individualized treatment, two cycles of neoadjuvant therapy (Nab-paclitaxel 0.4 g on day 1plus pembrolizumab 200 mg on day 2) were administered. The patient was further treated with subcutaneous injections of 1.6 mg thymalfasin (SciClone Pharmaceuticals, Italy) twice weekly, from the start of neoadjuvant therapy. 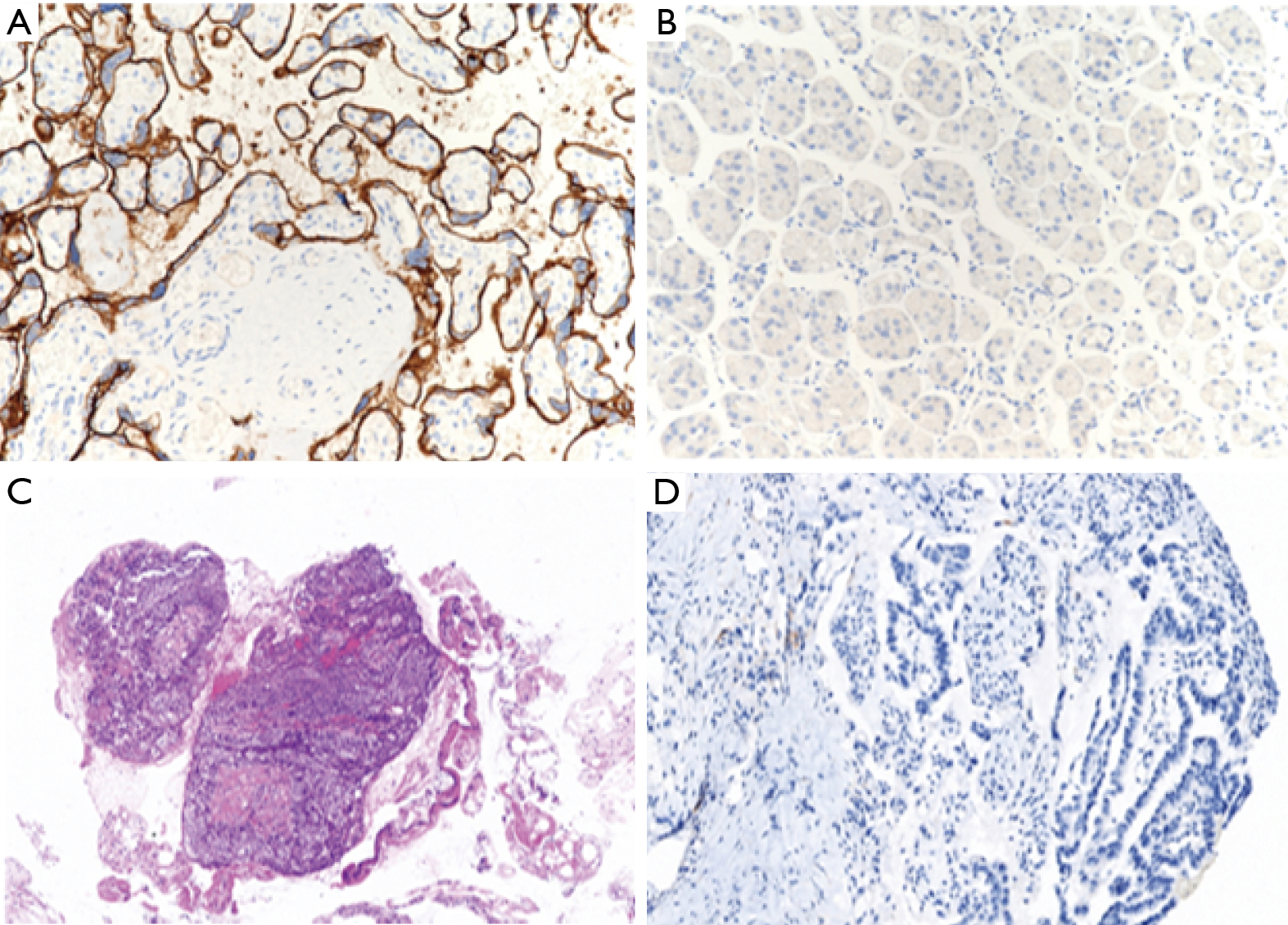 During the clinical course, no side effects of pembrolizumab were observed. Both the lesion and lymph nodes were smaller on repeat chest CT (Figure 3). Two weeks later, he underwent radical resection of the lesion at The First Affiliated Hospital of Soochow University. The patient recovered well after the surgery (Figure 4). 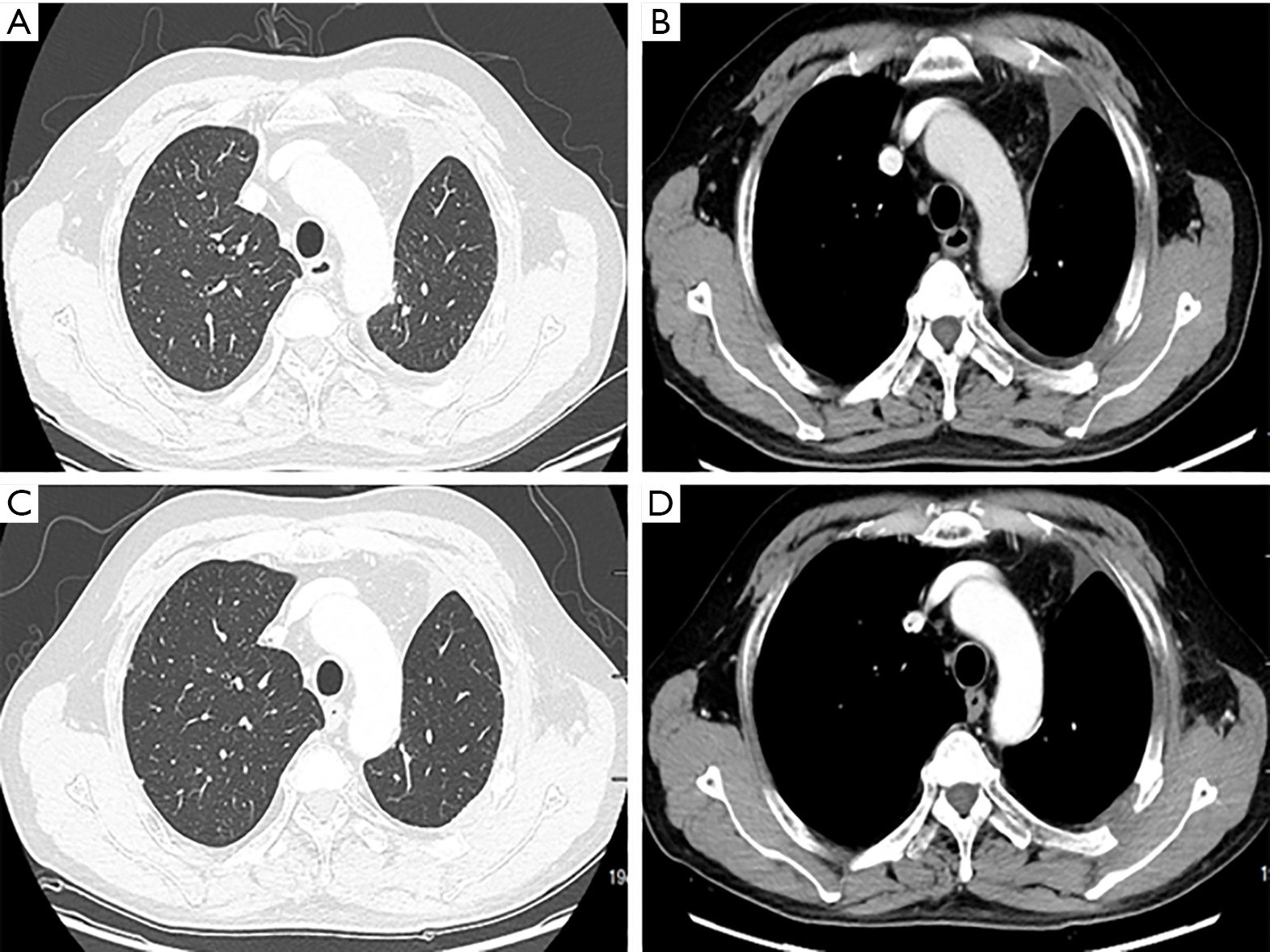 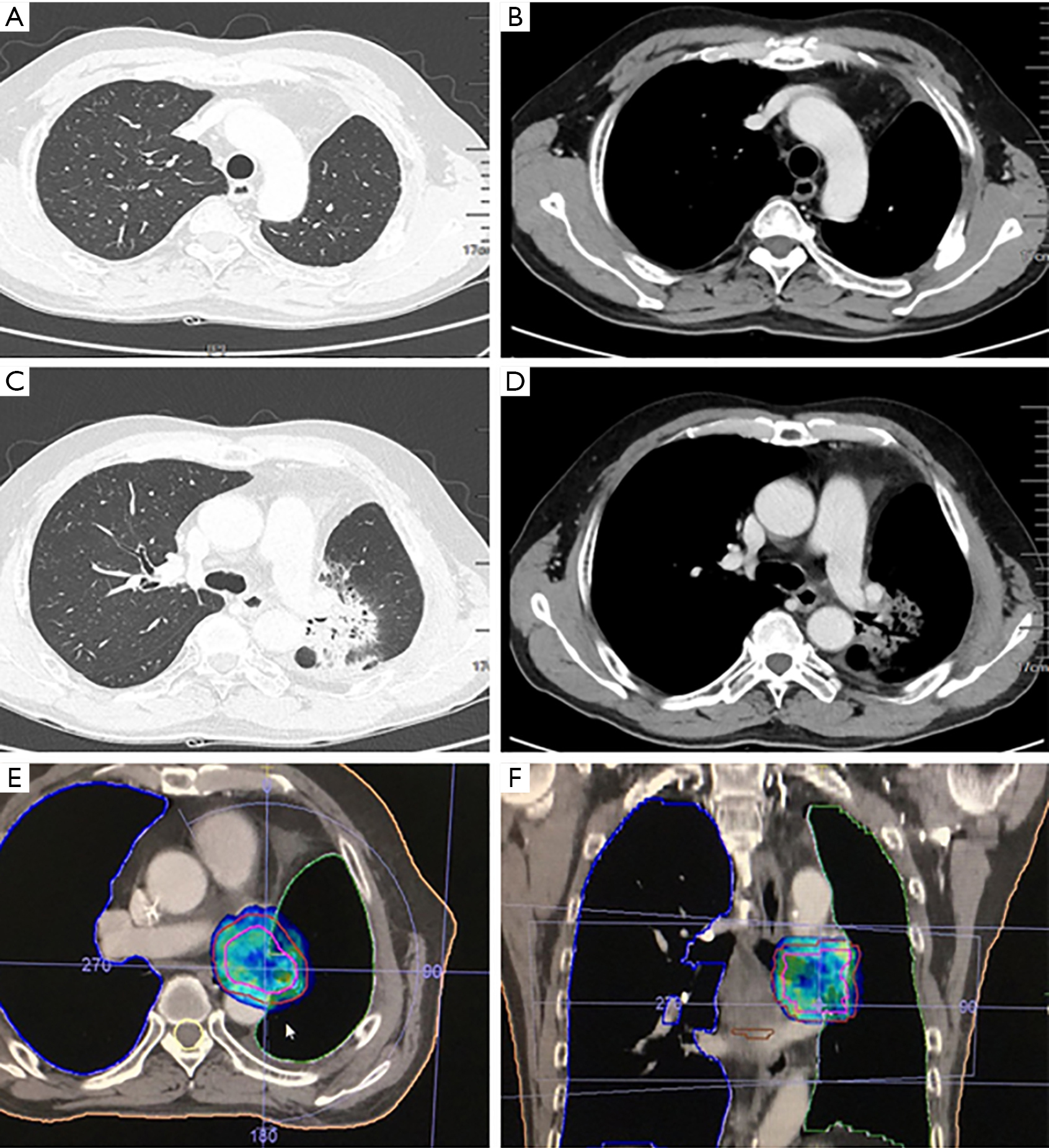 Figure 6 Radiation pneumonitis as a treatment-related adverse event. Follow-up after half a year, the image of lung window (A) and mediastina window (B) was showed in the surgical excision and the image of lung window (C) and mediastina window (D) was showed in the lesion of radiation pneumonitis. Horizontal position (E) and coronal position (F) scans were showed in chest CT. 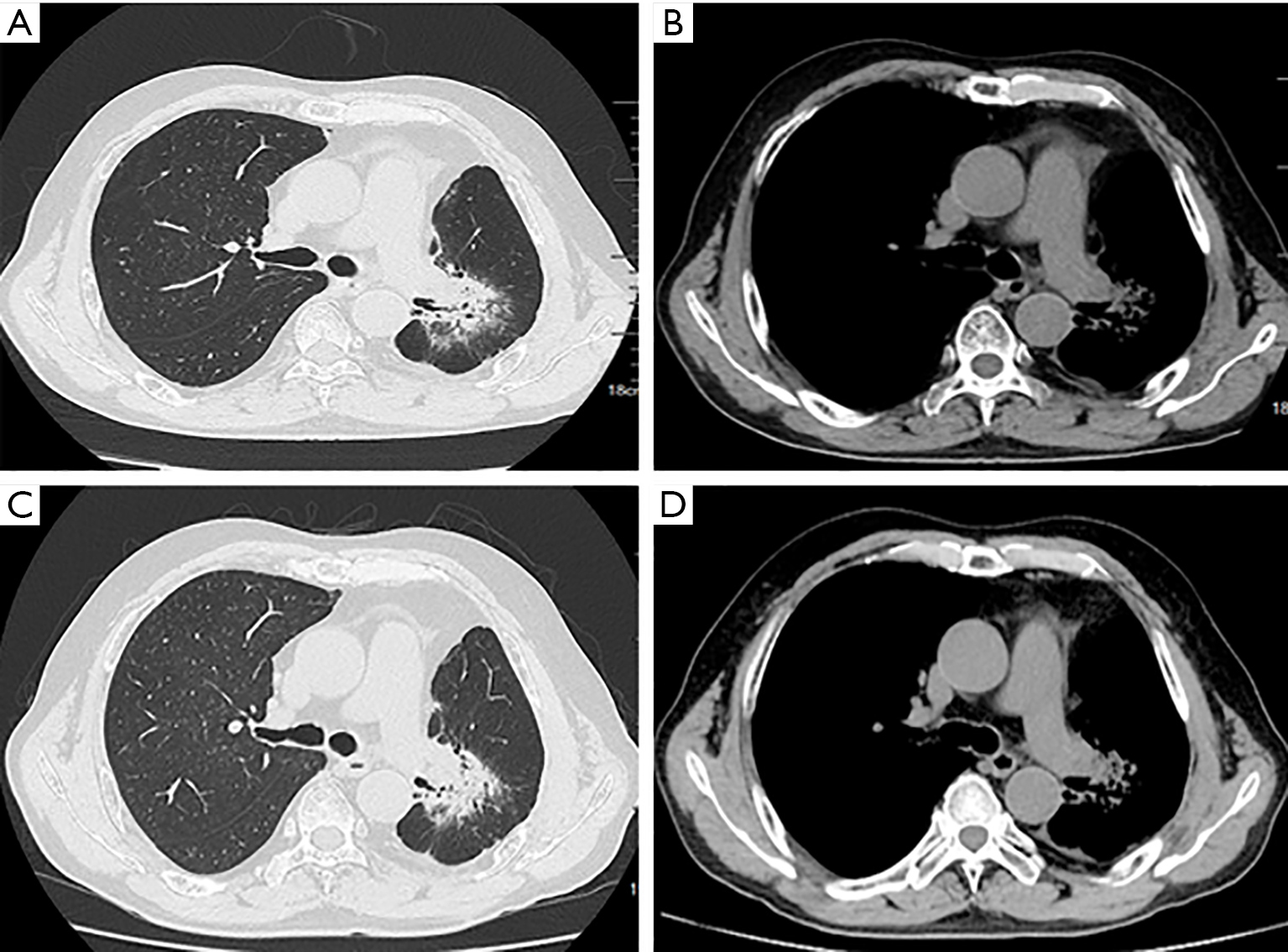 Nowadays, neoadjuvant treatment is frequently used before surgical radical operation to decrease the size of lesion and downstage it with high probability for easier excision (16). As a randomized, double-blind, phase III study, the KEYNOTE-407 trial was mainly designed to compare the efficacy and safety of platinum-doublet chemotherapy alone with pembrolizumab plus platinum-doublet chemotherapy. Progression-free survival (PFS) and overall survival (OS) were defined as the primary study endpoints. The study declared that pembrolizumab plus platinum-doublet chemotherapy can improve PFS and OS significantly better than chemotherapy alone. In addition, patients with negative expression of PD-L1 (TPS <1%) could also benefit (15). In the present case, the patient’s therapeutic result is inspiring, but some problems during the course of the disease still deserve attention whenever they arise.

The lesion obviously reduced after two cycles of neoadjuvant therapy; however, in terms of the subsequent operation, extensive adhesion of thoracic tissue and indistinct demarcation between surrounding tissue and vascular sheath with edema formation placed maximal pressure on the surgeons, greatly increasing the difficulty of the operation and increasing the risk of bleeding (17,18).

During the subsequent postoperative treatment, radiation pneumonitis developed as a treatment-related adverse event (TRAE) that is still an issue, according the NEOSTAR study (18). Low-dose glucocorticoids were used to treat our patient and show great prognosis (19). In short, most immune-related adverse events (irAEs) can be controlled and reversed with drug withdrawal (± corticosteroids) (20). Thymalfasin, an endogenous peptide, has been shown to increase the proportion of CD3+T cells, CD4+T cells and natural killer cells and may improve tumor response when administered with chemotherapy and immunotherapies (21).

In conclusion, the treatment of lung cancer has entered the era of individualized therapy, which relies on accurate detection and clear staging. Neoadjuvant treatment will be expected to mainly lead the trend of precise treatment of stage III cancer patients. However, some insufficient information remains. Whether the occurrence of TRAEs was effectively controlled during the median follow-up period of 14.3 months will be worth delving into.

In conclusion, traditional chemotherapy with single agents alone has been replaced by pembrolizumab plus platinum-doublet chemotherapy as a first-line treatment with significant benefit for patients. Additionally, it’s worth concerning that immune-related adverse events must be decreased under the control of drug dose in each patient.

Reporting Checklist: The authors have completed the CARE reporting checklist. Available at http://dx.doi.org/10.21037/apm-21-335

Conflicts of Interest: All authors have completed the ICMJE uniform disclosure form (available at http://dx.doi.org/10.21037/apm-21-335). The authors have no conflicts of interest to declare.