Irritable bowel syndrome (IBS), the most common gastrointestinal dysfunction in clinical practice, is characterized by abdominal pain, bloating, and changes in bowel habits. It is a clinical and social issue that warrants attention (1). The pathogenesis and mechanism of IBS have not yet been fully understood. Current research on the pathophysiological basis of IBS suggests that its pathogenesis is related to abnormal gastrointestinal motility, mental factors, immune abnormalities, and infections (2). Small intestinal bacterial overgrown (SIBO) refers to a syndrome of malabsorption of various nutrients caused by small intestinal stasis and excessive bacterial growth due to organic or functional reasons. Its clinical manifestations include abdominal pain, bloating, constipation, diarrhea, and/or malabsorption (3). In recent years, studies have found that the rate of positive SIBO in IBS patients is significantly increased, and it has been found that eradicating overgrown small intestinal bacteria can improve the symptoms of IBS patients. Therefore, the relationship between SIBO and IBS has attracted widespread attention (4,5). In the present study, we analyzed the correlation between SIBO and IBS onset and treatment prognosis, aiming to provide ideas for clinical treatment. We present the following article in accordance with the STROBE reporting checklist (available at http://dx.doi.org/10.21037/apm-21-427).

Inclusion criteria were as follows: (I) those who meet the Rome III diagnostic criteria (6): abdominal pain or discomfort recurring in the past 6 months, frequency of at least 2 days a week, and symptoms appear on at least 3 days a month in the past 3 months. As well as this, 2 or more of the symptoms occurred: symptoms improved after defecation; changes in the frequency of bowel movements during the attack (defecation ≥3 times a day or ≤3 times a week); stool trait (appearance) changes at onset; (II) no organic diseases of the digestive system were found after the physical examination, blood biochemistry, digestive endoscopy, or related imaging examinations; and (III) clinical data were complete. Exclusion criteria were as follows: (I) accompanied by other organic diseases that can cause abnormal gastrointestinal function, such as diabetes, thyroid disease, and connective tissue disease; (II) severe heart, lung, liver, or kidney disease; (III) previous history of abdominal surgery; (IV) use of antibiotics, lactulose, antacids, or drugs that affect gastrointestinal motility 4 weeks before study enrollment; (V) barium meal radiography and enema 1 week before study enrollment; and (VI) history of acute enteritis.

At the same time, 90 healthy controls who agreed to participate in the trial were selected as the control group. Of these, 53 were males and 37 were females, with an age range of 28–70 years and an average age of 49.63±12.33 years. There were no differences in general patient characteristics between 2 groups (P>0.05).

The HHBT-01 hydrogen breath tester (Shenzhen CNNC Headway Biotechnology, Shenzhen, China) is employed in this experiment. The hydrogen production food was prohibited for 24 h before the test, and the patients fasted for 12 h before the test. The patients were instructed to brush their teeth and rinse their mouth prior to the examination, and remained awake and quiet during the test. The patients avoided vigorous exercise to avoid bowel movements and fluctuations in lung ventilation.

The experiments were performed before and after treatment, respectively. Before the test, the HHBT-01 hydrogen breath tester operating instructions were strictly followed to combine the breath hydrogen tester. The breath tube of the hydrogen micro-analyzer was used to blow into and the flow rate was controlled at about 250 mL/min. After the exhaled gas was dried, it was captured between the sensor and the receiver valve, and the reading at this time was recorded as the concentration of hydrogen in the patient’s exhaled breath. Basic expiratory hydrogen was remeasured every minute, and if it was still high, the test was continued. If it dropped significantly, the test was performed on another day, as this could be due to insufficient food before the test or food that was slow to digest. At the beginning of the experiment, the lactulose oral solution package (10 g/package) was dissolved in 180–240 mL warm water for oral administration and drunk within 2 min. After taking lactulose, the expiratory hydrogen content was measured and recorded every 20 min for a total of 2 h. Finally, the expiratory hydrogen concentration curve was drawn and analyzed. Positive diagnostic criteria were fasting basal expiratory H2 ≥20 ppm and repeated determinations every minute (all H2 ≥20 ppm) (7). Or according to the following standards: (I) obvious double-peak pattern, namely the early small intestine peak and the late colon peak; and (II) the time from the start of hydrogen production after taking lactulose was <90 min, and the absolute value of the increase in hydrogen concentration was >20 ppm.

Detection of interleukin (IL)-1β and IL-10

In total, 3 mL of fasting venous blood extracted in the morning was centrifuged (1,088 g, 5 min, centrifugal radius 8 cm), and serum was then separated. IL-1β and IL-10 were measured by enzyme-linked immunosorbent assay method. The double-antibody sandwich kit (Beijing Yiming Biotechnology, Beijing, China) was used to detected protein expressive levels of IL-1β and IL-10, and the operation was carried out in strict accordance with the kit test instructions.

SPSS version 22.0 (IBM, Armonk, NY, USA) was used to analyze the data in the present study. Measurement data were expressed as mean ± standard deviation (); t-test was used for comparisons between 2 groups, and F-test was used for comparisons between multiple groups. Count data were expressed as percentage (%) using the χ2-test; P<0.05 indicated that the difference was statistically significant.

Comparison of symptom scores in the antibiotic group, microecological group, and placebo group before and after the intervention 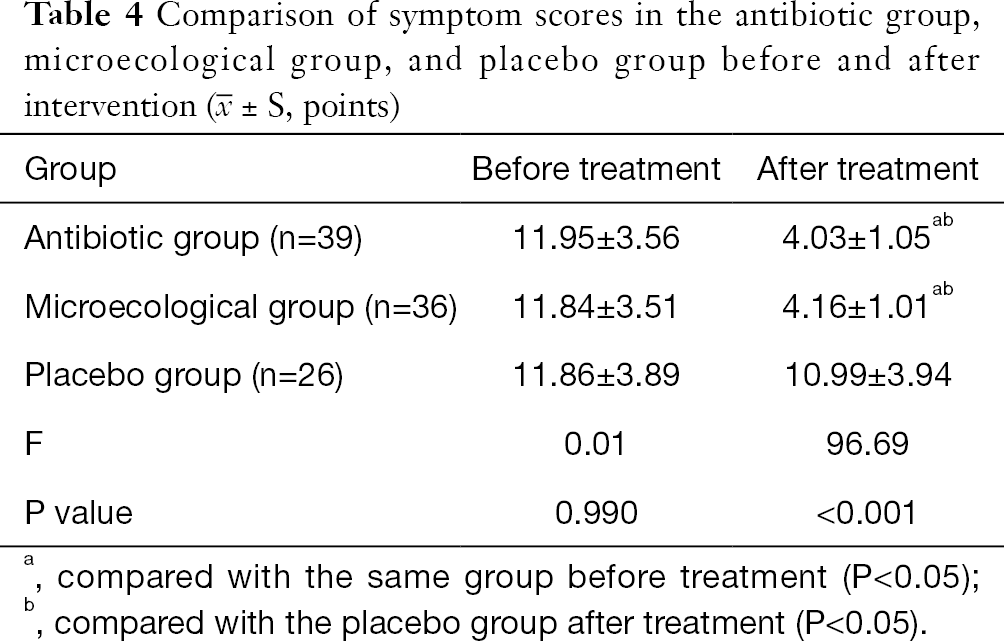 Table 4 Comparison of symptom scores in the antibiotic group, microecological group, and placebo group before and after intervention (, points)
Full table

Comparison of IL-1β and IL-10 levels in the antibiotic group, microecological group, and placebo group before and after the intervention

Table 5 Comparison of interleukin (IL)-1β and IL-10 levels before and after intervention in the antibiotic group, microecological group, and placebo group (, pg/mL)
Full table

Comparison of the intervention efficacy in the antibiotic group, microecological group, and placebo group 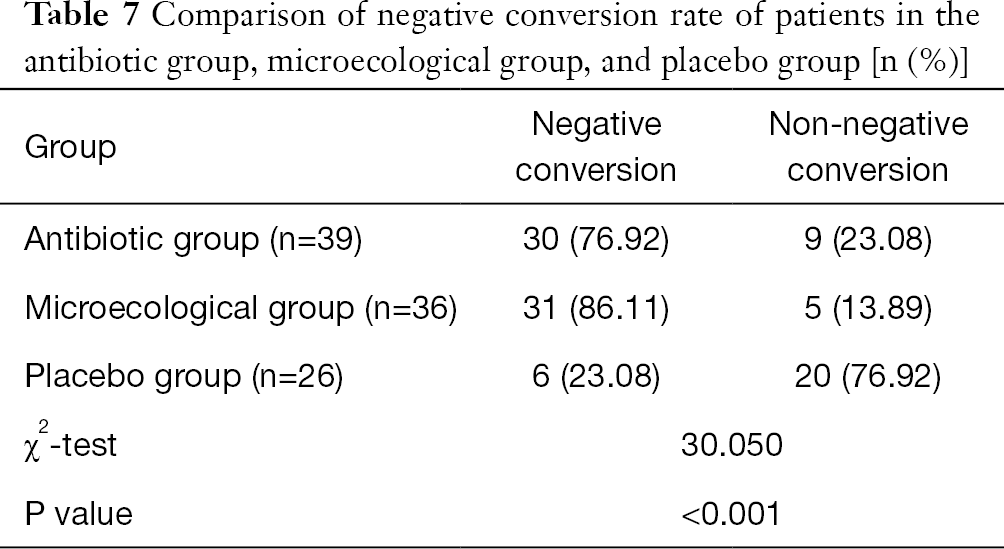 IBS is currently the most common functional gastrointestinal disease. It is mainly characterized by abdominal pain, abdominal discomfort accompanied by bowel habits, and/or abnormal stool characteristics (10). The pathogenesis of the disease is complicated, the etiology is not clear, and there are no objective diagnostic criteria. Moreover, there are no effective means for treatment, and it is prone to recurrence, making it difficult for clinicians to treat (11).

SIBO is a group of clinical syndromes caused by abnormal types and quantities of bacteria in the small intestine due to various reasons. It mainly manifests as malabsorption of nutrients, abdominal distension, and diarrhea, and its symptoms are similar to those of IBS (12). It has been proposed in the literature that SIBO plays a major role in IBS, and IBS can be diagnosed indirectly by detecting SIBO, providing a new direction for the clinical treatment of IBS. At present, it is believed that the impact of SIBO on IBS mainly has the following aspects. First, abnormal intestinal motility. SIBO has a significant influence on the occurrence of abnormal intestinal motility. Bacterial overgrowth can slow down the transit of the small intestine and prolong the oral-blind transit time. Furthermore, studies have shown that IBS and SIBO can slow down phase III of the inter-digestive migratory compound movement, therefore, intestinal flora can produce different digestive symptoms by affecting intestinal motility (13). Second, high visceral sensitivity. Previous studies have suggested that hypersensitivity to mechanical, chemical, temperature, and electrical stimulation of the colon may be one of the most important pathogenic factors for IBS. In SIBO, the intestinal mucosal villi shows patchy widening and flattening, and intestinal permeability increases, resulting in a decrease in the colon’s sensory threshold to irritation (14,15). Third, SIBO activates the intestinal mucosal immune response. The normal intestine is colonized with a large number of bacteria, which interact with the body to maintain normal metabolism and various functions of the body, and at the same time stimulate the body to produce complete immune function. The overgrowth of bacteria will produce a variety of toxic substances. These substances, including bacteria themselves, can stimulate the intestinal immune cells to produce cytokines, which leads to increased sensitivity of the intestinal mucosa and induces intestinal irritability (16).

The results of the present study showed that the positive rate of SIBO in the IBS group was higher than that in the control group (P<0.05), suggesting that there is a correlation between SIBO and IBS. However, due to the similar symptoms of IBS and SIBO, detecting only the incidence of SIBO in IBS patients cannot indicate that SIBO is the cause of IBS, because SIBO may also be a symptom or complication of IBS (17). Therefore, we further observed improvements in the symptoms of IBS patients after the treatment of SIBO with antibiotics. The results showed that the patient symptoms of IBS and SIBO turned negative patient were significantly improved compared with those who did not turn from positive to negative. Therefore, the findings further indicate that that SIBO is the cause of IBS.

Reporting Checklist: The authors have completed the STROBE reporting checklist. Available at http://dx.doi.org/10.21037/apm-21-427

Conflicts of Interest: All authors have completed the ICMJE uniform disclosure form (available at http://dx.doi.org/10.21037/apm-21-427). The authors have no conflicts of interest to declare.

Ethical Statement: The authors are accountable for all aspects of the work in ensuring that questions related to the accuracy or integrity of any part of the work are appropriately investigated and resolved. All patients agreed to participate in this study and signed an informed consent form. This study was approved by the Sichuan Provincial People’s Hospital, University of Electronic Science and Technology of China (No. 20180529). The study was conducted in accordance with the Declaration of Helsinki (as revised in 2013).