Sphingosine 1-phosphate (S1P) is a bioactive sphingolipid containing 2-amino-1,3-dihydroxy-octadec-4-ene. Sphingolipids are specific cellular lipids in eukaryotes and are characterized by a particular aliphatic amino alcohol known as sphingosine (1-3). S1P is produced in the cytosol and the nucleus in a variety of cells via the phosphorylation of two sphingosine kinases (SPHK1 and SPHK2 or simply SK1 and SK2, respectively). S1P-specific phosphatases can dephosphorylate S1P to form sphingosine, or S1P lyase enzyme (SPL1) can irreversibly degrade S1P to form fatty aldehyde and phosphoethanolamine (4-6). Increased levels of S1P are found in the circulation, whereas S1P levels are very low in most other tissues. Biologically active S1P regulates multiple cellular processes, including cell differentiation, migration, proliferation, morphogenesis, cytoskeletal organization, adhesion, tight junction assembly, apoptosis and the localization of various cell types (Figure 1) (7,10). 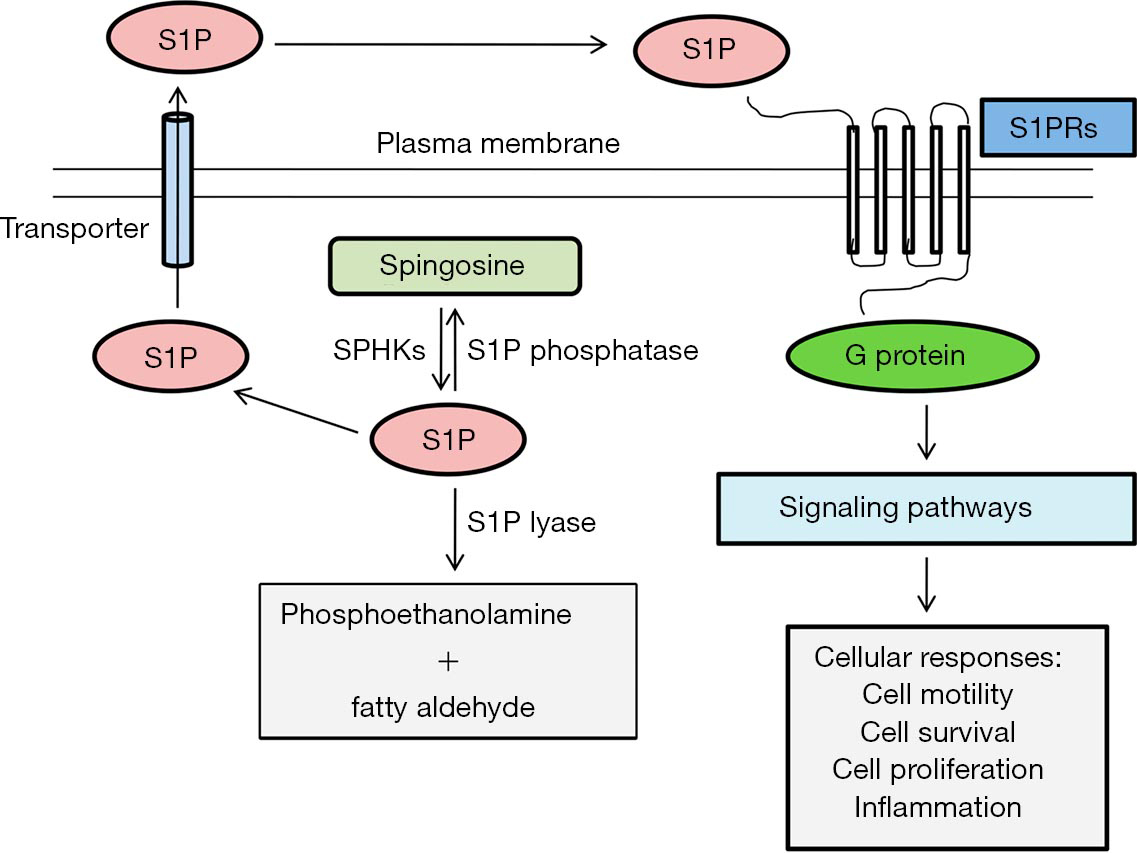 Figure 1 Basic role of sphingosine 1-phosphate. S1P is produced through the phosphorylation of sphingosine by SPHKs. Phosphatases can dephosphorylate S1P to form sphingosine, or S1P lyase can irreversibly degrade S1P to form fatty aldehydes and phosphoethanolamines. S1P is secreted from cells into the extracellular environment by particular transporters, binds to its receptor on the plasma membrane and regulates multiple cellular processes by transmitting signals through G protein-coupled receptors (5,7-9).

S1P has been identified as a major regulator of cell trafficking in immune systems. Moreover, S1P may act as a coupling factor in bone metabolism (11-13). Formerly, S1P was thought to be an intracellular second messenger that connects and maintains the activity of different intracellular regulatory molecules. Later, it was discovered that S1P was an extracellular ligand for G protein-coupled receptors of the EDG family, which transfer signals to the inside of the cell (8,14). Cell surface receptors regulate the activity of S1P, and S1P signalling has been regarded as a model of inside-out signalling. S1P is produced inside the cell and exported to the extracellular space. Endothelial cells release S1P in the extracellular milieu through specific types of transporters, including ATP-binding cassette (ABC) receptors, Spinster Homologue 2 (SPNS2) or major facilitator superfamily transporter 2b (Mfsd2b), and S1P binds to and transfers signals through one of the five specific G protein-coupled receptors on the cell surface (S1PR1, S1PR2, S1PR3, S1PR4, and S1PR5) to promote various types of cellular functions (9,15-17).

S1P plays an important role in maintaining bone metabolism, including osteoporosis. This review article focuses on the role of S1P in maintaining bone homeostasis and how S1P could serve as a diagnostic and therapeutic target in osteoporosis. We present the following article in accordance with the Narrative Review reporting checklist (available at http://dx.doi.org/10.21037/apm-20-1255).

Role of S1P in bone metabolism

S1P and its metabolic precursor ceramide are the central molecules of sphingolipid metabolism. Ceramide mainly controls the balance between the levels of sphingosine and S1P and a phenomenon termed sphingolipid rheostat (6,18). Ceramide/S1P metabolism can determine whether a cell will die or proliferate. This metabolic pathway is associated with skeletal development, bone mineralization and bone homeostasis. However, S1P can play a critical role in various bone diseases, including osteoarthritis, osteoporosis, rheumatoid arthritis, spondyloarthritis and bone cancer and metastasis (19).

Bone undergoes continuous remodelling through the removal of aged bone by osteoclasts and new bone formation by osteoblasts. Regulation of these activities is essential for maintaining consistent bone quality and quantity. In the remodelling process, cellular balances between bone formation and resorption are critical and strictly controlled by many factors (20-22). S1P exerts receptor-mediated effects on the proliferation, differentiation and migration of both osteoclasts and osteoblasts. S1P stimulates bone formation and plays an essential role in bone homeostasis by targeting osteoclastogenesis and osteogenesis. S1P released by cells into the extracellular environment binds with S1P receptors on osteoblasts, leading to an increase in RANKL expression through the induction of COX2. The enhanced RANKL in osteoblasts then binds with more RANK and mediates osteoclast differentiation. Extracellular S1P also regulates bone homeostasis by coupling osteoclast and osteoblast activity (17,23).

However, in pathological conditions, this equilibrium is disrupted. The removal of aged bone is the distinctive function of osteoclasts. Osteoclasts establish an isolated microenvironment between themselves and bone by developing a specialized cytoskeleton. The bone resorption ability of osteoclasts is controlled by different factors (20,24). S1P has been shown to control the migration of osteoclast precursors via G protein-coupled receptors for S1P (S1PRs). S1P keeps osteoclast precursors away from bone surfaces to reduce bone degradation and prevent bone loss (22,25,26).

Bones are living tissue, and aged bone tissue is continually absorbed, while osteophytes are generated to regulate normal bone mineral homeostasis. In an older person, bone resorption occurs faster than bone formation (27,28). Osteoporosis is a disease in which there is a disturbance in the balance between the formation and resorption of bone. The bones become more permeable, fragile and prone to fracture, especially in the hip, wrists or spinal vertebrae (29,30). Osteoporosis can affect both sexes, but women suffer mostly from reduced levels of oestrogen after menopause (31,32). Osteoporosis develops slowly, and typically, there are no symptoms in the early stage. However, once bones have been weakened by osteoporosis, patients might show signs and symptoms, including back pain, loss of stature, and a curved posture, and there is a risk of bone fracture (33,34). Several osteoporosis risk factors have been identified. Some are modifiable, and some are not modifiable, including age, sex, ethnicity, lifestyle, height, weight, genetic factors, and fracture history (35,36). Patients with osteoporosis may change lifestyle, supplementation, and appropriate medical treatment to achieve the desired goals. Medical treatment of osteoporosis can help to impede disease progression, reduce pain, prevent fractures, and maintain healthy bone mineral density (BMD) and bone mass (37-39).

S1P is a lipid molecule that has a regulatory effect on bone metabolism. S1P has been shown to have multiple contributions to osteoclast and osteoblast crosstalk and can play an essential role in maintaining the balance between bone resorption and formation. Disturbances in the activities of osteoblasts and osteoclasts may induce various types of metabolic bone disorders, including osteoporosis (5,40). Increased levels of S1P are responsible for reduced levels of BMD and increased levels of bone resorption markers (BRMs), which are associated with an increased risk of osteoporosis (41,42). These risk factors are especially frequent in postmenopausal females. S1P affects osteoclasts to activate TGF-β1, resulting in an increased possibility of bone resorption (Figure 2) (43,44). Ota et al. (43) examined the effects of TGF-β1 on osteoclast-mediated cell mineralization. During resorption, the level of TGF-β1 is increased, leading to the production of osteoclasts to restore bone loss (43). 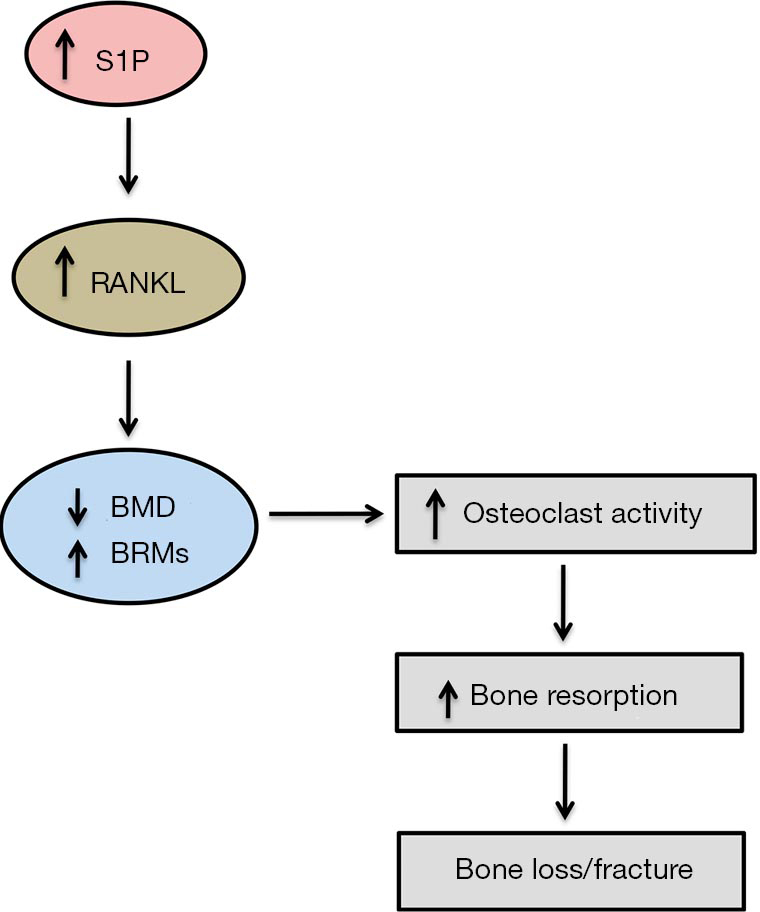 Therapeutic role of S1P in osteoporosis

Osteoporosis is a progressive bone disorder, but therapeutic agents that stimulate new bone formation are very limited. An improved understanding of S1P receptor biology may facilitate the development of new therapeutic strategies for osteoporosis (45,46). S1P is a potential therapeutic target for treating osteoporosis by controlling the migration of osteoclast precursors, vigorously maintaining the bone mineralization process, and playing a critical regulatory role during osteoclastogenesis (25,47).

It has been revealed that blocking S1P lyase can increase S1P levels and stimulate the differentiation of osteoblasts through S1PR2 in mouse osteoporosis models (48,49). Weske et al. further showed that increasing the level of S1P by inhibiting S1P lyase enhanced bone formation and potently stimulated osteoblastogenesis by inducing adipogenesis and inhibited osteoclastogenesis by inducing osteoprotegerin production (50). Weske et al. (48) found that the S1P2 agonist CYM5520 exerted osteoanabolic effects and counteracted the decrease in bone quality in ovariectomized mice. Therapeutic treatment with CYM5520 enhanced the number of osteoblasts, osteoid surface and vertebral bone mass in osteopenic ovariectomized mice by inducing the formation of new bones. Luo et al. (51) investigated the anti-osteoporotic effect of the traditional Chinese medicine FufangZhenzhuTiaozhi (FTZ) in an osteoporosis mouse model and found that FTZ reduced the risk of osteoporosis. Ishii et al. further suggested that the functional inhibition of S1PR2 by the antagonist JTE013 restricted the localization of osteoclast precursors and reduced the number of mature osteoclasts in an osteoporosis mouse model (47). Huang et al. investigated the effect of fingolimod (FTY720, a structural analogue of sphingosine) on the formation of bones in ovariectomized (OVX) rats and showed that FTY720 upregulated the expression levels of various transcription factors in OVX rats and prevented bone resorption in an animal model of post menopausal osteoporosis (52). Yu et al. reported that treatment with FTY720 inhibited osteoporosis in murine bone marrow cells by inhibiting proinflammatory cytokine production and suppressing osteoclastogenesis. FTY720 has been reported to prevent bone loss in animal models by inhibiting RANKL-induced osteoclastogenesis (24).

Bisphosphonates can be used for to treat osteoporosis by inhibiting osteoclast bone resorption and reducing fracture risk (44). Peltier et al. used the MG-63 cell line (osteoblast-like characteristics) to examine the mechanism by which iron impaired osteoblasts. The researchers found that excess iron could cause osteoporosis through the S1P pathway (53). In vitro and in vivo studies indicated that pharmacological intervention could direct in the development of novel therapeutic strategies. These studies suggested that S1PRs could be potential drug targets in the development of osteoporosis treatments (5,53,54). Zhang et al. (23) summarized the role of S1PRs in different bone diseases and how these receptors could be used as potential targets for the treatment of bone diseases, including osteoporosis, based on the biological functions of S1P in osteoclasts/osteoblasts, as well as immune cells and cancer cells.

Osteoporosis has become a major health burden with high morbidity and mortality rates. Dysregulation of S1P correlates with the progression of osteoporosis (30,57). In osteoporosis, increased levels of circulating S1P are responsible for increased bone resorption and reduced BMD values. The measurement of bone formation and bone resorption is important for clinical investigations of osteoporotic patients (29,58). Among the available biochemical markers, S1P can be used as an early marker in the diagnosis of osteoporosis. S1P-targeted therapy is an emerging and novel treatment strategy for osteoporosis that lacks serious side effects (59-61). Moreover, specific agonists and antagonists of S1P and the generation of targeted knockout models may provide exciting future avenues to reduce the risk of osteoporosis by limiting inflammation and preventing bone resorption (50,62,63). Another important point is that S1P plays a critical role in obesity and morbidity associated with age, sex and environmental factors (64), which is also an interesting area to explore. S1P might be a link between obesity and osteoporosis in elderly individuals.

Conflicts of Interest: All authors have completed the ICMJE uniform disclosure form (available at http://dx.doi.org/10.21037/apm-20-1255). The authors have no conflicts of interest to declare.

Ethical Statement: The authors are accountable for all aspects of the work and ensuring that questions related to the accuracy or integrity of any part of the work are appropriately investigated and resolved.