Factors associated with dysfunction of autogenous arteriovenous fistula in patients with maintenance hemodialysis: a retrospective study

Chronic kidney disease (CKD) is a condition of irreversible destruction of the renal parenchyma, with a progressive loss of kidney function over a period of several years. Currently, kidney transplantation is the most effective treatment for CKD. However, its application is limited because of the donor organ shortage. Thus, maintenance hemodialysis (MHD) becomes the best alternative for kidney transplant. MHD patients require essential lifetime vascular access during hemodialysis. Autologous arteriovenous fistula (AVF) is the optimal vascular access for MHD. However, possible AVF dysfunction after surgery, particular for prolonged use, has limited its use. The patient had to undergo surgery again if the AVF could not meet the requirement. This will not only increase the costs, but also lead to the waste of vascular resources. Therefore, the purpose of this paper is to study the relevant factors associated with AVF dysfunction.

We present the following article in accordance with the STROBE reporting checklist (available at http://dx.doi.org/10.21037/apm-20-2196).

We selected 121 patients who underwent vascular anastomosis for MHD at the Department of Vascular Surgery, Xuanwu Hospital, Capital Medical University between January 1st, 2016 and December 31st, 2018.

(I) Patients unable to receive telephone follow-up for any reason; (II) patients with a short life expectancy due to various causes (e.g., tumors); (III) patients who underwent renal transplantation, were lost to follow-up, or died; (IV) patients with other causes of AVF dysfunction.

A total of 77 patients who met the inclusion criteria were included in the study. Patients were divided into patency (n=47) and dysfunction (n=30) groups based on whether their AVF was patent or not. The protocol of this retrospective study conformed to the ethical guidelines of the Declaration of Helsinki (as revised in 2013) and was approved by the Ethics Committee of Xuanwu Hospital {No. L YS [2020]018} with a waiver of informed consent.

AVF operation was deemed to be successful if vascular thrill was palpable or auscultated, and the blood flow was above the minimum rate required for dialysis (250 mL/min). A functional AVF must be absence of thrombosis, stenosis, hematoma, and other serious complications.

The patients underwent routine fasting blood tests at least 3 months after initial dialysis. We collected the most recent data before AVF dysfunction (or before the study if AVF is patency). In addition, the blood samples were collected by experienced health professionals.

Continuous data were expressed as mean ± standard deviation. Comparisons between groups were performed by independent t-tests if normal distribution is conformed. Mann Whitney U test was used if normal distribution was not conformed. Categorical variables were reported using frequency counts and percentages, and statistical differences between two groups were compared using chi-square test. First, univariate analysis was used to identify the variables with difference between patency and dysfunction group. Second, (multivariate) Cox proportional hazard regression was performed to further analyze the identified variables with differences. “Enter” method was adopted to screen variables. It was considered statistically significant if P<0.05. Power test of the study was performed by PASS software. Meanwhile, statistical analyses were performed with SPSS 19.0.

Generally, 121 patients with ESRD were initially assessed in this study. Of the 121 patients, 23 were lost to follow-up, 10 received kidney transplant, and 11 died; 77 patients who met the inclusion criteria were finally included in the analysis. Power of the data was 0.92, which was included in the Cox model. Among them, 53 (68.8%) were male. The mean age was 56.5±11.3 years, ranging from 29 to 82 years old. Diabetic and non-diabetic nephropathy accounted for 47 (61.0%) and 30 (39.0%) of ESRD cases, respectively. All AVFs were matured, and the follow-up ranged from 5 to 39 months with a mean of 20.9±10.1 months. Meanwhile, the follow-up period of patients in patency group and dysfunction group was (19.7±9.9) months and (22.8±10.2) months, respectively. Since the follow-up period was non-normal distribution, Mann Whitney U test was performed. There was no statistically significant difference between the patency and dysfunction groups (P=0.191). During the observation period, 30 (39.0%) patients developed AVF dysfunction whereas 47 (61.0%) patients did not.

Comparison of baseline between patency and dysfunction group

The clinical and demographic characteristics of the entire study cohort are summarized in Table 1. A total of 20 study factors were included and compared between the patency and dysfunction group. P values of four variables were less than 0.1 (Screening variables), which were Gender, Phosphorus, TC and LDL. There was no significant difference for other factors (Table 1). 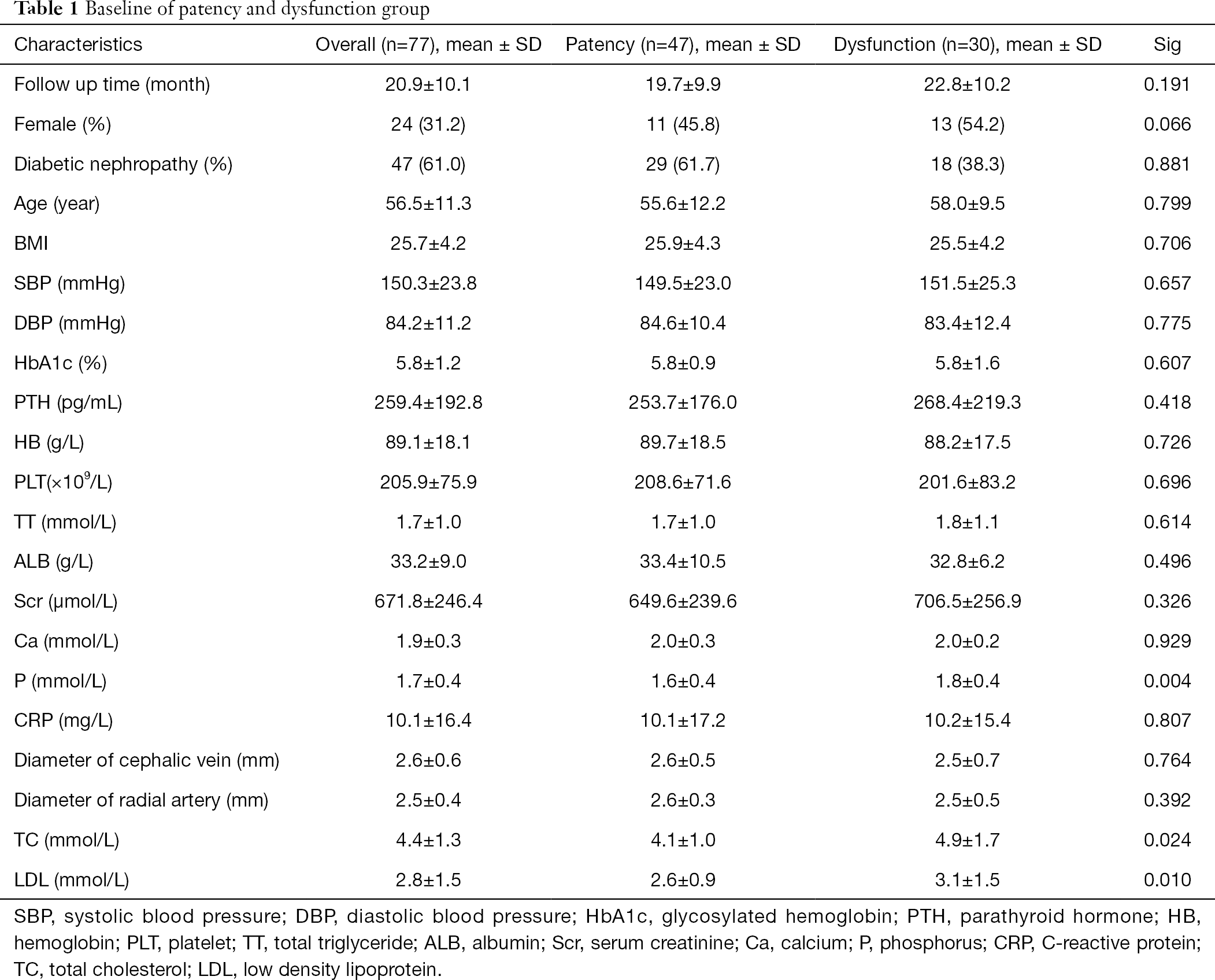 Figures 1-4 show the AVF patency survival curves with respect to P, TC, LDL, and gender, respectively. Log-rank tests indicated statistically significant differences between all 4 pairs of groups with P value of 0.007, 0.001, 0.012, 0.013, respectively. Previous studies have shown that HbA1c was higher in dysfunction group (1). In addition, age can affect the patency of AVFs (2). Therefore, P, TC, LDL, Gender, HbA1c and age were included in the multivariate Cox proportional hazard regression, which revealed that hypercholesterolemia and hyperphosphatemia were independent risk factors for AVF dysfunction (P<0.05) (Table 2). 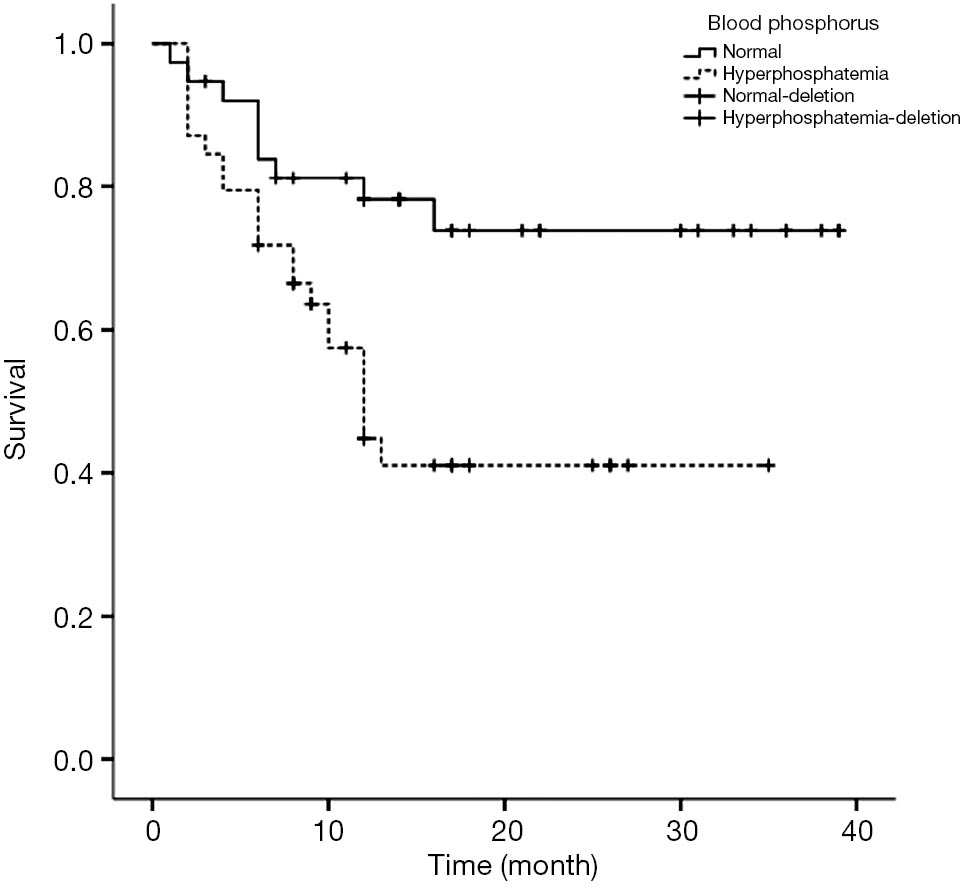 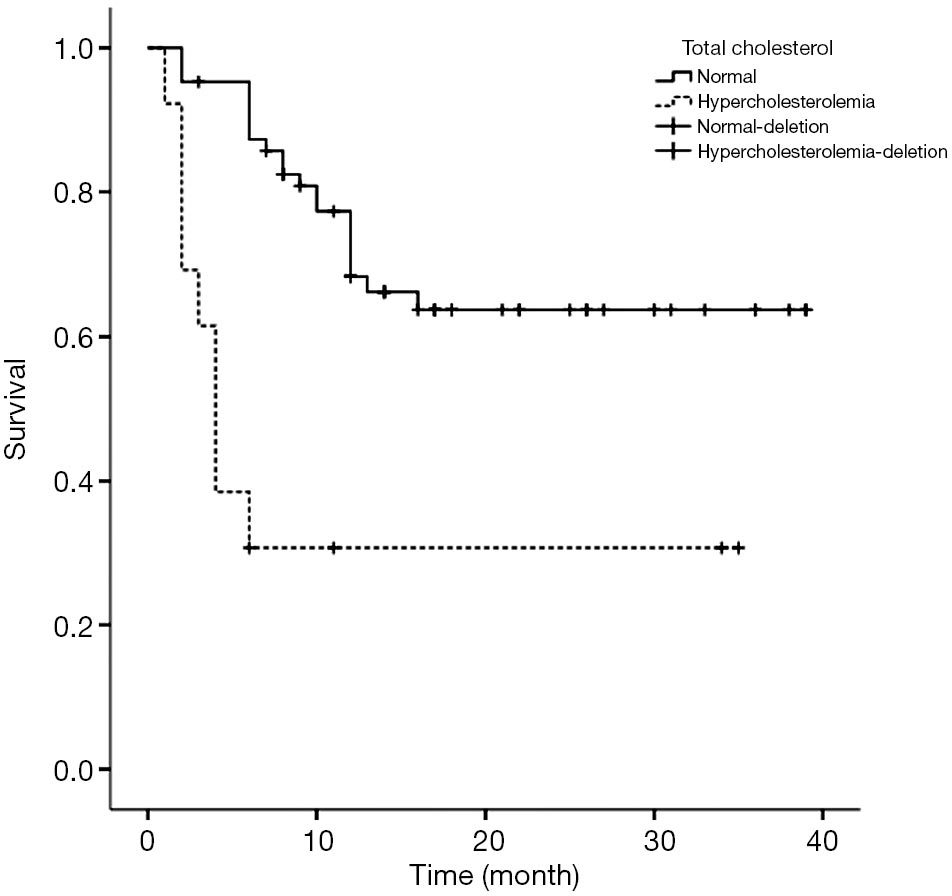 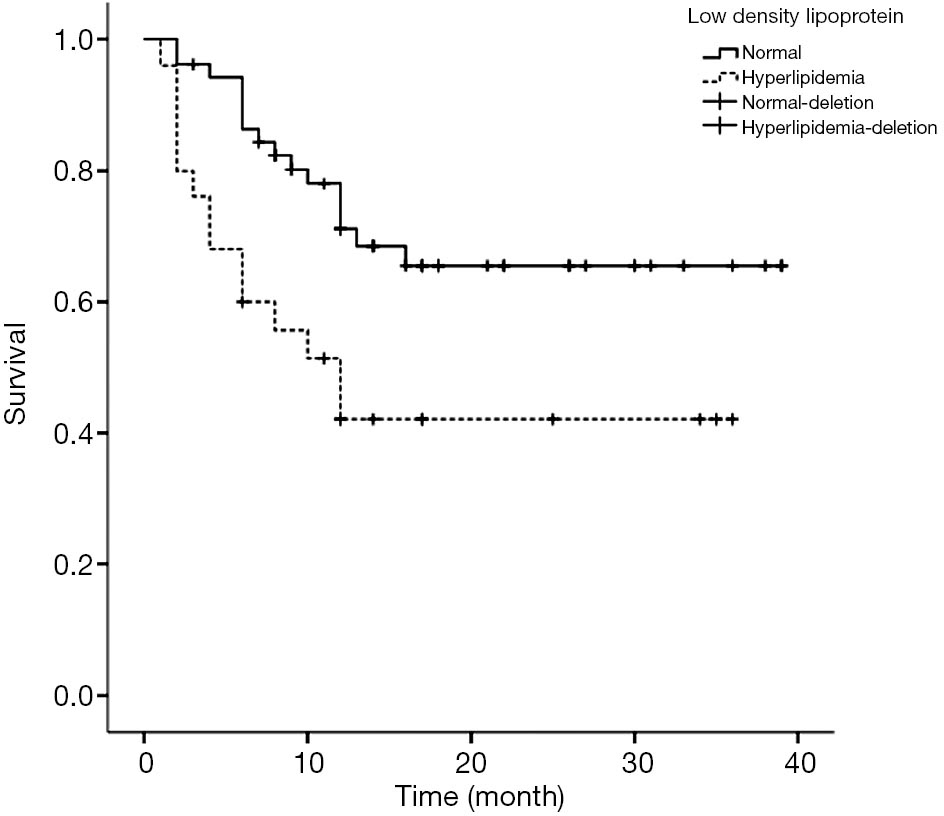 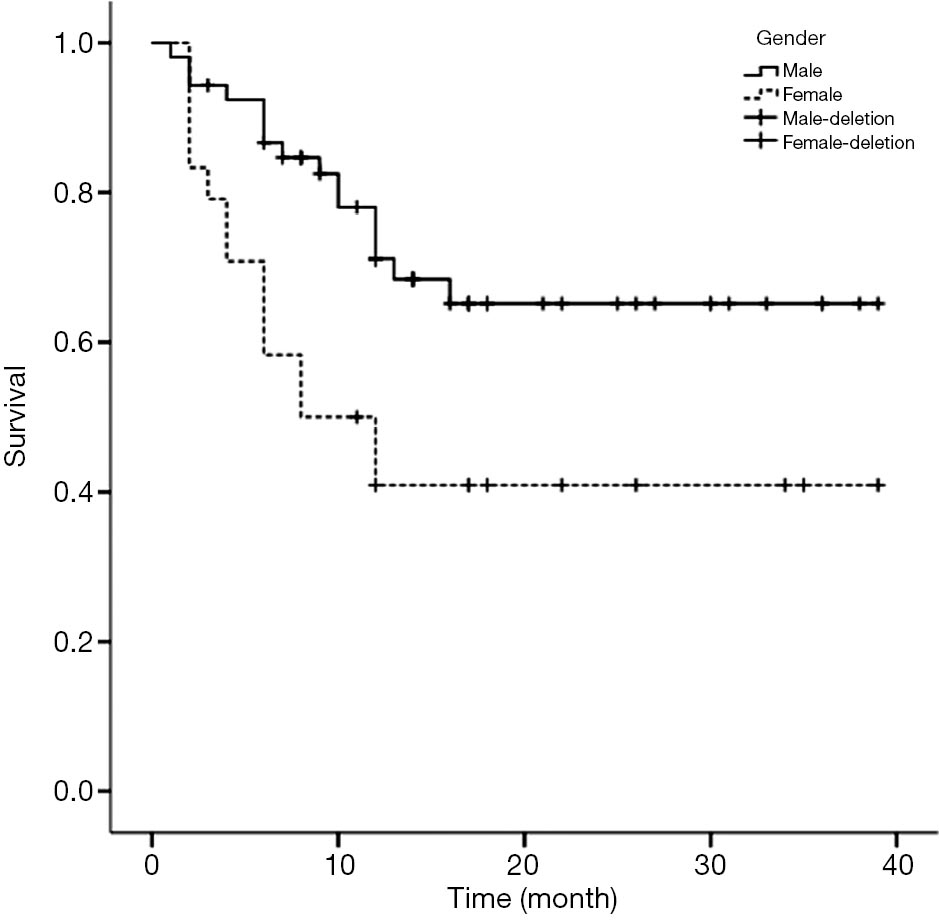 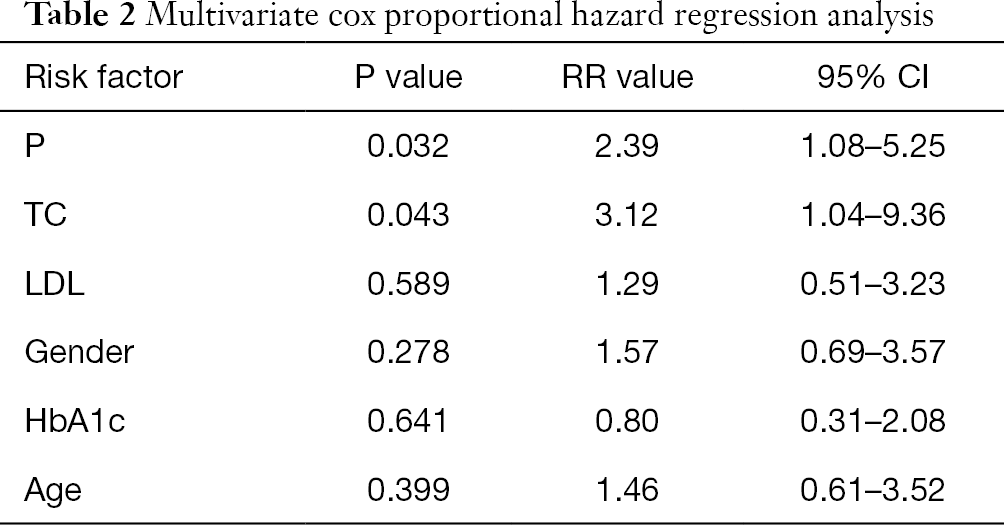 Over the past 5 decades, there has been a growing consensus of “fistula first” principle in patients with MHD. The guidelines, published in 1997 and revised in 2003 and 2006 (3-5), together with the “fistula first” principle proposed in 2003 (6), suggest that AVF is the optimal choice. Although AVF is associated with thrombosis, blood steal syndrome and aneurysm, incidence of these complications are relatively low for AVF. However, studies show that the AVF failure ranges between 15% and 22% (4,7). Recent studies suggested that the internal environmental factors are important for AVF success (8). Many factors caused by renal failure, such as high blood calcium, phosphorus and lipid, CRP, Scr, vascular diameter and preoperative radial artery calcification (RAC), may affect the patency of AVFs (9-12). Although some of these risk factors for AVF dysfunction have been well studied, many others remain elusive.

Since the “fistula first” principle in 2003, clinicians have increasingly preferred AVF for MHD (13). In this study, we found TC and Phosphorus to be the independent risk factors for AVF dysfunction.

Most elderly patients present with other underlying diseases. As such, they may not harness optimal benefits from certain disease interventions, evidenced by short survival rate (14). In a separate but related study, it was found that the advantages of AVF over central venous catheter (CVC) gradually decreases with age (15). In contrast, the disadvantages of AVF are gradually amplified. As such, CVC usage may be preferred in elderly patients. Therefore, “fistula first” principle will face a challenge. Based on our study, age is not an independent risk factor for AVF dysfunction. Generally, age of patients does not affect the primary patency rate of AVF, but affect the long-term benefits. At the same time, from an economic point of view, AVF use for dialysis in elderly patients may be counterproductive. In a related study, Hall et al. established a Markov model from retrospective data to analyze the input-output ratio of patients with AVF, arteriovenous graft (AVG) and CVC (15). They found that the input-output of AVF against AVG and CVC gradually declines with patients' age. For the elderly Medicare patients in United States, the average annual cost of maintaining AVF patency for 2.5 years is $7,871 whereas that of patients with primary dysfunction is $13,282 per year (16). So, the benefits of AVF in elderly patients are suboptimal.

Blood lipid plays an important role in the patency of arteriovenous fistula. Previous study showed that TC was an independent risk factor for AVF dysfunction (17). Generally, high-density lipoprotein (HDL) is a protective factor for AVF patency. Wang et al. demonstrated that higher TT increases the risk of AVF dysfunction (18). However, based on our study, TC was an independent risk factor for AVF, but TT was not. This discrepancy may be attributed to the small sample size in our study. Hyperlipidemia can activate vascular endothelial growth factor A/matrix metalloproteinase-9 signaling pathway, which causes intimal hyperplasia and atherosclerosis (16).

Our result demonstrated that Scr is not an independent risk factor for AVF dysfunction, which is consistent with the previous study (22). Thus, the renal function (Scr) at the beginning of dialysis does not have a significant impact on the primary patency rate.

We also investigated the effect of vascular (arterial and venous) diameters on AVF primary dysfunction. Misskey et al. reported that radial arterial diameter (<2.1 mm) is an independent risk factor for AVF dysfunction (23). However, in this study, the result of Cox survival analysis didn’t support preoperative vascular diameter to be an independent risk factor for AVF dysfunction, probably due to initial screening on vascular diameter before surgery at our center.

We acknowledge that our study analyzes data from a single center and selection bias may be unavoidable. Being a retrospective study with a small sample size, we couldn’t exclude other confounding. Due to the limitation of our dataset, 23 were lost to follow-up for various reasons, 10 received kidney transplant, and 11 died, which may lead to the deviation of the results. The small sample size might generate type-1 and/or type-2 error. Although Power test was performed (Power =0.92), a larger sample size study is still needed in future. In addition, this is an exploratory study. The prospective cohort with larger sample size may be used to validate the risk factors, such as phosphorus and TC, for AVF dysfunction in future.

Findings of this study implicated TC and phosphorus as independent risk factors for AVF dysfunction, and these factors can reduce the primary patency rate. Therefore, before the operation, patients should be assessed appropriately. Currently, there are many measures to correct hypercholesterolemia, among which the most commonly used are lipid-lowering drugs. And the outcome is satisfactory. However, it is relatively difficult to correct hyperphosphatemia. The main treatment measures were “3D principle”, including diet, dialysis, and drugs (24). But the effect is unsatisfactory. Recently, we reported that high phosphorus can induce phenotype transformation of VSMC and eventually lead to intimal hyperplasia through DNA damage response pathway (25). Therefore, inhibitors targeting the relevant signaling pathway may block intimal hyperplasia, which may provide a new clue for the treatment of AVF dysfunction.

Reporting Checklist: The authors have completed the STROBE reporting checklist. Available at http://dx.doi.org/10.21037/apm-20-2196

Conflicts of Interest: All authors have completed the ICMJE uniform disclosure form (available at http://dx.doi.org/10.21037/apm-20-2196). The authors have no conflicts of interest to declare.

Ethical Statement: The authors are accountable for all aspects of the work in ensuring that questions related to the accuracy or integrity of any part of the work are appropriately investigated and resolved. The study protocol conformed to the ethical guidelines of the Declaration of Helsinki (as revised in 2013), and the Ethics Committee of Xuanwu Hospital approved this study {No. L YS [2020]018}. Because of the retrospective nature of the research, the requirement for informed consent was waived.