Thoracic endometriosis: a case report and review of the literature

Thoracic endometriosis (TE) manifests as a series of symptoms caused by normal functioning endometrial tissues appearing in normal pleural, diaphragm or lung parenchyma (1). Endometriosis affects 6–10% of women of childbearing age (2) and thoracic endometriosis is even rarer, no relevant statistics was reported yet. The main clinical symptoms include pneumothorax (73%), menstrual hemothorax (14%), menstrual hemoptysis (7%), and pulmonary nodules (6%) (3). While the pathogenesis of TE is unclear, currently several hypotheses exist. (I) Coelomic metaplasia theory: pleural epithelial cells from the same source as the endometrium could be transformed into functional endometrial epithelial cells owing to the long-term action of estrogen (3). There have also been reports of male patients with pulmonary endometriosis due to long-term estrogen stimulation (4). (II) Retrograde menstruation theory: when menstruation occurs, the fluid within the endometrium flows back from the fimbria of the fallopian tube and abdominal fluid with endometrial cells attach to the right diaphragm via the sickle ligament, resulting in congenital diaphragmatic defects commonly located on the right side of the chest cavity causing TE mostly on the right side (5). (III) Lymphatic and hematogenous dissemination theory: after uterine cavity surgery, endometrial cells are transferred to the lungs and possibly other locations through the lymphatic vessels (6).

A variety of tests are applied to the diagnosis of TE, including chest X-ray (CXR), computed tomography (CT), magnetic resonance imaging (MRI), bronchoscopy, and surgical biopsy, while both medical and surgical approaches are used in treatment. The principle of medical treatment for TE is to inhibit the pituitary-gonad axis£¬which can be achieved with oral contraceptives, progesterone agonists, gonadotropin releasing hormone agonists, and danazol. While some authors hold that medications should be initiated within a short period of time from diagnosis (7), unacceptable side effects can occur such as amenorrhea, vaginal dryness, virilization, and lower limb edema, even though these side effects gradually disappear after medication is ceased. The purpose of surgical treatment is to completely remove the lesion (8). This paper reports on a patient who recovered well after surgical treatment.

We present the following case in accordance with the CARE reporting checklist (available at http://dx.doi.org/10.21037/apm-21-280).

A 19-year-old female-patient attended our hospital in August 2020 stating that she had repeatedly experienced hemoptysis during menstruation for 3 months. The hemoptysis volume was about 15 mL each time, was red in color, and disappeared after menstruation. She reported three abortion and curettages, the most recent being 1 year ago, and a 2-year history of smoking 10 cigarettes per day. There were no abnormalities in routine blood and blood biochemical examination after admission. In July 2020, the patient had undergone a chest CT examination during menstruation, and this showed exudative changes of the right middle lung (Figure 1A). During this period, the patient had no symptoms of cough or fever. In August 2020, the patient underwent a further chest CT examination outside of her menstrual period, which showed that the large exudative lesions in the right middle lung had been absorbed, and only a small amount of ground glass lesions remained (Figure 1B). Subsequently, the patient was diagnosed with TE, and the right middle lung was completely surgically removed. This disease needed to be differentiated from tuberculosis, lymphangiomyomatosis and lung infection. The patient had no fever or sputum expectoration and no increased neutrophil, so we did not consider she had lung infection. She never had a history of tuberculosis. Her chest CT did not support the diagnosis of lymphangiomyomatosis. Post-surgical pathological results showed the test object was the right middle lung tissue, and large hemorrhage foci and old bleeding could be seen in the alveolar cavity. Scattered glandular epithelial cells were observed in the hemorrhage, and nests of epithelial cells could be seen in the lumen of individual blood vessels, consistent with the diagnosis. Immunohistochemical results showed: 1#4#CK (+); ER (−); PR (−) (Figure 1C). The patient recovered well postoperatively and reported no hemoptysis during 2 months of follow-up. Reexamination of the chest through CT showed no ground-glass lesions or pulmonary exudative lesions (Figure 1D). 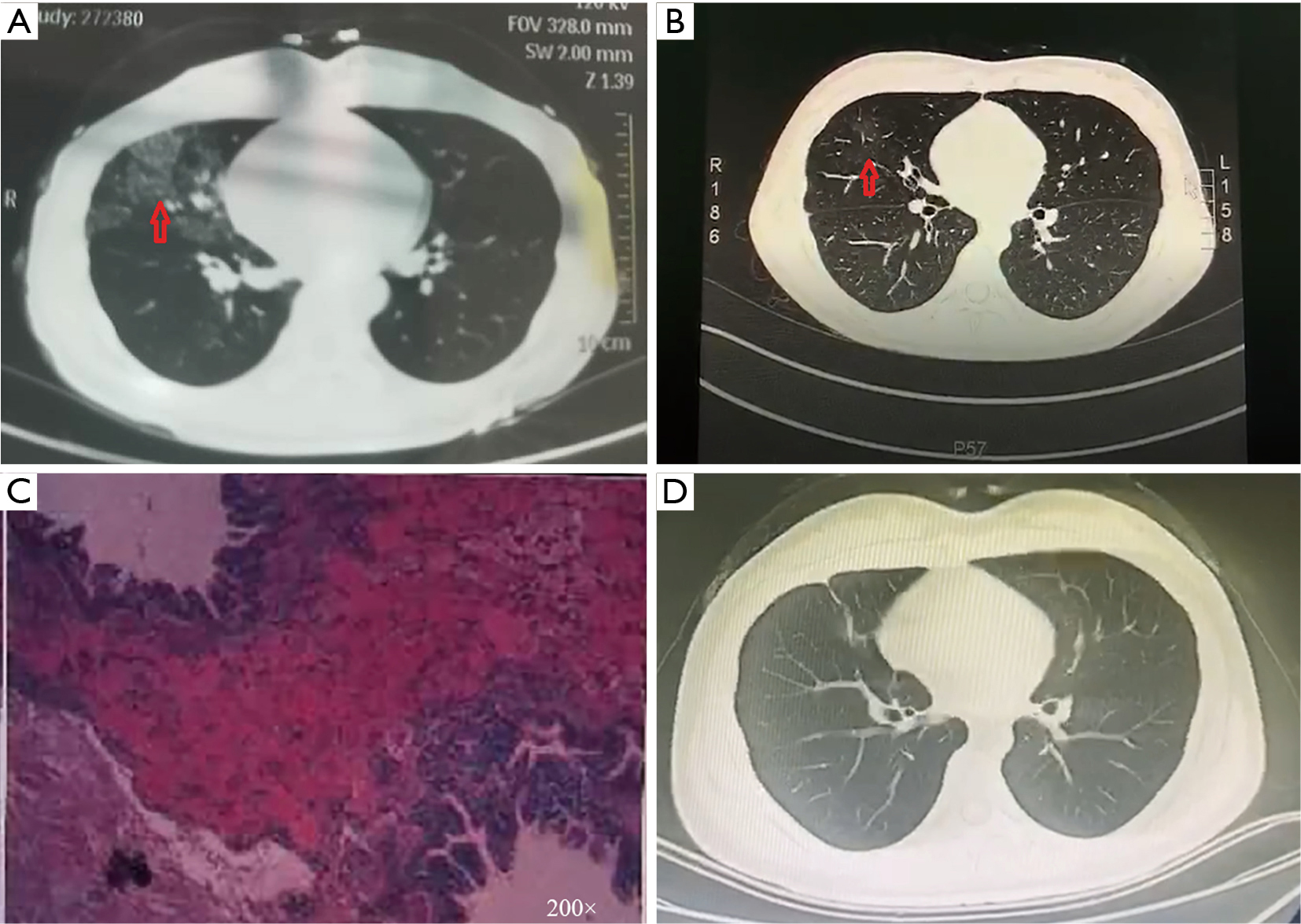 Figure 1 Chest CT (Computed tomography) and postoperative pathological results of the patient. (A) The chest CT examination in the preoperative menstruation period. Large exudative lesions can be observed in the right middle lung (pointed by the arrow in A). (B) Chest CT examination after menstruation shows most of the exudative lesion of the right middle lung has been absorbed, and only a small amount of ground glass lesions remain (pointed by the arrow in B). (C) The pathological results after surgery show the test object was the right middle lung tissue, and large hemorrhage foci and old bleeding can be seen in the alveolar cavity. Scattered glandular epithelial cells are seen in the hemorrhage, and nests of epithelial cells in individual blood vessel lumen, consistent with the endometriosis changes in the right middle lung. The immunohistochemical results showed (TE staining): 1#4#CK (Cytokeratin): positive (+); ER (estrogen receptor): negative (−); PR (progesterone receptor): negative (−). (D) Reexamination of the chest CT at 2 months after surgery shows no exudative lesions or ground-glass lesions.

We chose to remove the patient’s right middle lung for the following reasons. Firstly, the patient’s lesion was limited to the right middle lung and did not spread to other lung lobes and she had no pleural effusion or pneumothorax strongly suggesting there was no diaphragm or pleural disease (which was confirmed at operation). On this basis it was possible to isolate and remove the diseased segment without impacting on other lung regions. In addition, the patient had a large lesion area which could not be partially resected and we considered it important to completely remove the diseased tissue to avoid the possibility of recurrence, although some authors have reported that local resection of the lesion only improved the symptoms of hemoptysis during the period of the patient’s menstruation and did not offer a complete cure (3,9,10). A second reason we opted for surgery in this case was that despite there being reports that long-term drug treatment offered a reasonable alternative for the treatment of TE (11-13), the patient in this case could not tolerate the side effects of drug treatment to the extent that she refused it and requested surgery. Finally, we chose surgery in this case because the patient was young and her lung function and physical condition were appropriate to fully tolerate the operation.

The patient was followed up for 2 months, and hemoptysis did not reappear, indicating that the surgical treatment was effective. In conclusion, we make the following recommendations for patient selection when considering a surgical approach to the treatment of TE. Patients for whom surgery should be considered are those who (I) do not respond to drug therapy or relapse once drug therapy is withdrawn; (II) cannot tolerate drug therapy or who may wish to get pregnant in the near future; (III) have limited lesions which are able to be completely removed during surgery. Patients in whom surgery is not recommended include those who have extensive lesions which cannot be surgically removed, including those with diaphragm or pleural involvement as the diseased tissues must be completely removed to avoid recurrence, and those who are unfit for surgery. To minimize the likelihood of recurrence, patients could be treated with drugs postoperatively.

Funding: This research was supported by the National Natural Science Foundation of China (grant number 81960532).

Reporting Checklist: The authors have completed the CARE reporting checklist. Available at http://dx.doi.org/10.21037/apm-21-280

Conflicts of Interest: All authors have completed the ICMJE uniform disclosure form (available at http://dx.doi.org/10.21037/apm-21-280). The authors have no conflicts of interest to declare.