Sepsis is a systemic inflammatory response syndrome caused by infection, which is divided into general sepsis and septic shock according to the 2016 European definition of sepsis 3.0 (1). Relative to patients without malignancy, cancer patients have a nearly 10-fold risk of developing sepsis (2), which is the leading cause of intensive care unit (ICU) admission in such patients (3). In recent cohort studies, the ICU mortality rate ranged from 40% to 60% when septic shock and malignancy were present together (4,5).

Brain natriuretic peptide (BNP), an amino acid stored in the ventricular septum membrane, is a classic diagnostic marker of cardiac dysfunction. Following the increase in ventricular wall pressure as a result of cardiac dysfunction, BNP is secreted into the blood in large quantities, where it exerts diuretic and vasodilating effects (6). Sepsis can increase the pressure of the ventricular wall to abnormal levels, leading to a large quantity of BNP secretion and release into the blood (7). Furthermore, BNP is increased significantly in patients with septic shock, relative to those with general sepsis (8). Septic shock appears to be a strong stimulus of BNP release, and the BNP level has been used successfully to distinguish septic shock from other types of shock (9,10).

This study aimed to clarify the correlation between early BNP levels and mortality in cancer patients with septic shock for early warning and prognostic guidance.

We present the following article in accordance with the STARD reporting checklist (available at http://dx.doi.org/10.21037/apm-20-2212).

The study was conducted in accordance with the Declaration of Helsinki (as revised in 2013). The study was approved by the Institutional Review Board of Peking University Cancer Hospital (No. 2016KT18). All patients provided written informed consent before inclusion. Clinical data on 159 cancer patients with septic shock admitted to ICU from Dec. 2012 to Dec. 2019 who met the inclusion criteria were collected retrospectively.

Inclusion criteria: patient data were collected according to the 2016 European definition of sepsis 3.0 and septic shock (1). Sepsis refers to the loss of control of the body’s inflammatory response to infection leading to life-threatening organ dysfunction. Organ dysfunction is defined as an acute increase in the Sequential Organ Failure Assessment score (SOFA score ≥2 points) secondary to infection. Septic shock refers to refractory hypotension (patients still need vasopressor drugs to maintain mean arterial pressure ≥65 mmHg after adequate fluid resuscitation) and blood lactate (Lac) ≥2 mmol/L (1). After entering the ICU, patients with septic shock were treated by active cluster treatment according to the guidelines of Surviving Sepsis Campaign (SSC) (11,12).

Exclusion criteria: patients with acute coronary syndrome, chronic heart disease (such as severe hypertension, heart valve disease, or arrhythmia), or chronic liver and kidney insufficiency were excluded from the study.

All clinical characteristics (including age, sex, tumor sites, infection sites), Lac, procalcitonin (PCT), white blood cell (WBC), BNP (BNP normal values were less than or equal to 100 pg/mL), and acute physiology and chronic health status system II scores (APACHE-II scores) were recorded as early as possible within the ﬁrst 24 hours of admission to the ICU. The patients were followed up during the ICU stay. All patients were divided into a death group (60 cases) and a survival group (99 cases), according to 28-day mortality. There were no statistically significant differences between the two groups in terms of sex, age, tumor sites and infection sites (P>0.05) (Table 1). 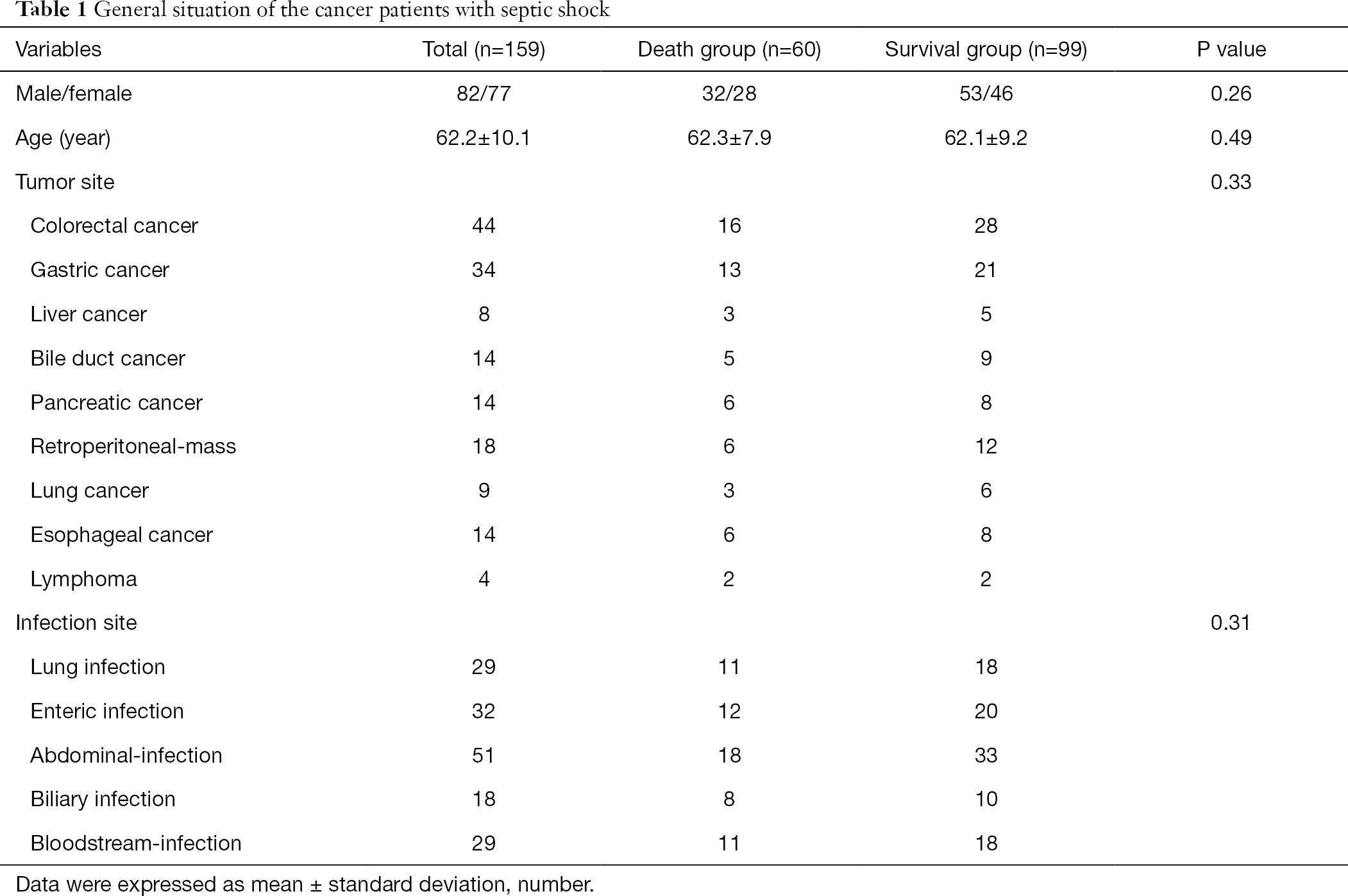 SPSS Statistics, Version 26.0 (Armonk, NY: IBM Corp.) was used for statistical analysis. Data were analyzed as the mean ± standard deviation, number, or median. Unpaired t-tests and Mann-Whitney U tests were used to compare continuous variables and those with a skewed distribution, respectively. A χ2 test was used to compare categorical variables. All significantly different variables from univariate analysis were included in multivariate logistic regression analysis so as to select the independent risk factors. Receiver operating characteristic curve (ROC curve) analysis was used to determine the value of all independent risk factors for predicting mortality in cancer patients with septic shock. P<0.05 was considered statistically significant.

BNP, APACHE-II score, Lac, and PCT in the death group were significantly higher than those in the survival group (P<0.05), whereas WBC was not significant different between the two groups (Table 2).

Multivariate logistic analysis was performed on the variables with significant differences between the two groups, and BNP, APACHE-II score, and Lac were significant, independent predictors of mortality in cancer patients with septic shock (P<0.05) (Table 3). 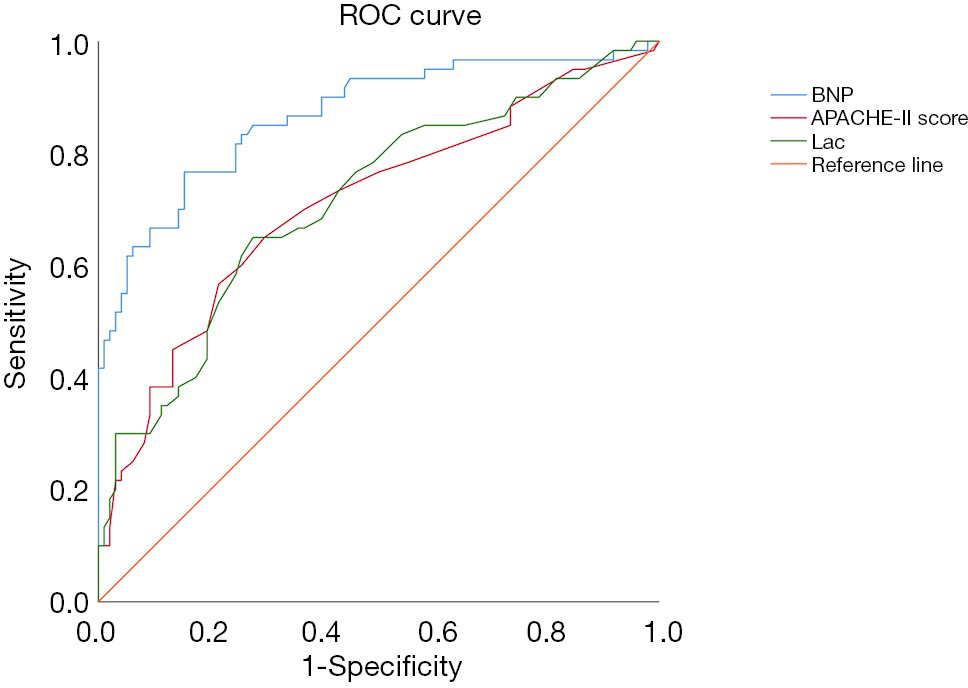 BNP is a member of the natriuretic peptide family. It is mainly produced in the ventricle. Increased ventricular wall tension and increased blood vessel content are the main factors that induce its secretion (6).

A significant increase in BNP in sepsis usually indicates the presence of sepsis-induced myocardial dysfunction (SIMD) (20). With an emphasis on early fluid resuscitation to ensure organ tissue perfusion for patients with septic shock following the 2016 SSC guideline, more attention should be paid to cardiac function and its capacity. SIMD is an important reason for the increase in mortality and lengthening of ICU stay in patients with sepsis (21). Based on the results of this study, we recommend that clinicians perform plasma BNP monitoring on patients with septic shock, and pay more attention to BNP levels equal to or greater than 900 pg/mL in the first 24 hours after admission to the ICU. When performed by fluid resuscitation, these patients’ cardiac function status should be assessed with the help of bedside cardiac ultrasound or pulse-indicating continuous cardiac output monitoring (PICCO) to maintain the balance between fluid volume and cardiac function so as to reduce mortality and improve prognosis (22-24).

This study had some limitations. First, in patients admitted to the ICU, the plasma BNP level was limited to active anti-shock treatment in the first 24 hours. In view of the sepsis treatment guidelines of the SSC, the first 24 hours following ICU admission are the “golden period” for sepsis treatment. The relevant data were reliable. The disadvantage was a lack of continuous monitoring data. Secondly, the patient’s cardiac function lacked quantitative parameter evaluation. If the patients’ cardiac ultrasound results could be obtained at the same time for comparison with BNP, the correlation between the two of them would become clearer. The above needs to be improved in future research.

Thanks Elise’ efforts for the English language revision.

Reporting Checklist: The authors have completed the STARD reporting checklist. Available at http://dx.doi.org/10.21037/apm-20-2212

Conflicts of Interest: All authors have completed the ICMJE uniform disclosure form (available at http://dx.doi.org/10.21037/apm-20-2212). The authors have no conflicts of interest to declare.

Ethical Statement: The authors are accountable for all aspects of the work in ensuring that questions related to the accuracy or integrity of any part of the work are appropriately investigated and resolved. The study was conducted in accordance with the Declaration of Helsinki (as revised in 2013). The study was approved by the Institutional Review Board of Peking University Cancer Hospital (No. 2016KT18) and informed consent was taken from all the patients or their next of kin.