Colorectal cancer (CRC) is the third most common malignancy in the world (1). More than 50% of patients with CRC presented with liver metastases (2). At CRC diagnosis, synchronous liver metastases are already present in approximately 15% of patients (3,4). Curative resection plays an important role in the treatment of synchronous colorectal cancer liver metastases (CRLM). For initially resectable CRLM, the timing of colorectal and liver surgery remains controversial (5,6). Compared with stage resection, simultaneous resection of CRC and metastases has the advantages of requiring a single operation, lower cost, similar postoperative complication rates and even more favourable overall survival (OS) (5,6). Simultaneous resection has been advocated by increasing numbers of clinicians.

The prognosis of patients with CRLM with simultaneous resection of CRC and liver metastases is still not satisfactory. Overall, 75% (7) of patients still experience recurrence after surgery; the 5-year progression-free survival (PFS) and OS rates are only 21.2% and 46.4%, respectively (8). The incidence rates of postoperative complications and major complications are approximately 47% and 12% (9). Positive primary lymph node metastasis is a risky independent predictor for survival in CRLM patients, which leads to more unfavourable survival (10,11). It is urgent to identify predictive factors of primary lymph node metastasis and prognosis for patients with synchronous CRLM with simultaneous resection of CRC and liver metastases. A nomogram, a model for predicting the risk and prognosis probability and guiding the strategies of treatment and follow-up plans, plays an increasingly important role in clinical practice. Tang et al. (12) established nomogram for predicting occurrence and OS of synchronous colorectal liver metastasis and Yan et al. (13) constructed nomogram to predict lymph node metastasis and liver metastasis in patients with early colon carcinoma. However, these studies did not consider the effect of pre-operative testing markers. Preoperative testing marker levels from preoperative blood routines have been investigated to predict the prognosis of many tumors (14-17). There is still no study investigating the role of preoperative testing markers in the prediction of primary lymph node metastasis, post-operative complications and prognosis in patients with synchronous CRLM with simultaneous resection of CRC and liver metastases. The present study firstly filled blank and constructed nomograms incorporating preoperative testing markers to help the clinicians identify high-risk patients and design individualized treatment. We presented the following article in accordance with the TRIPOD reporting checklist (available at http://dx.doi.org/10.21037/apm-20-2303).

Neoadjuvant chemotherapy (NAC) was recommended for CRLM patients with high risk factors for recurrence (18). The NAC regimen included a combination of 5-fluorouracil/capecitabine and oxaliplatin/irinotecan with or without targeted therapy (bevacizumab and cetuximab). Patients, after the completion of NAC treatment, usually underwent liver resections within 4–6 weeks. Postoperative complications were graded according to the Clavien system, and major complications were defined as grade III or IV complications. The highest grade was used for patients who experienced any multiple postoperative complications.

Patients were followed up at regular intervals after surgery. The first follow-up date was one month after surgery, with subsequent follow-ups every 3 months for 2 years, every 6 months between 2–5 years, and every 1 year afterwards. PFS was defined as the interval from the date of resection to progression or the last follow-up.

To analyse continuous and categorical variables, the Mann-Whitney U test and the chi-square or Fisher’s exact test were adopted, respectively. The PFS were measured by the Kaplan-Meier method and compared with the log-rank test. Youden index is optimized over the entire range of values for sensitivity and specificity, which determine the ROC space. The optimal cut-off values were identified using the highest Youden index (sensitivity + 1-specificity) (19). On the basis of the highest Youden index, the optimal cut-off values of perioperative markers for postoperative major complications and positive lymph node metastasis were determined. To identify the optimal segmentation threshold for survival curve risk stratification, an X-tile analysis was carried out. The multivariate models retained all predictors with P<0.10 in the univariate analysis. Through the logistic regression analysis model, multivariable analysis of the relationships between patient characteristics and postoperative major complications and positive lymph node metastasis was performed. Through the Cox regression model, multivariable analysis of survival was performed. Forward: likelihood ratio was implemented in multivariate analysis. P<0.05 was considered statistically significant. The construction of the nomogram employed statistically meaningful independent predictors. To explore the model discrimination, the C-index and area under the receiver operating characteristic curve (AUROC) were used. To evaluate the model calibration, the calibration plots and the Hosmer-Lemeshow chi-square test were performed. Statistical analyses were performed using SPSS version 22 software (Armonk NY, USA) and R software (http://www.r-project.org). 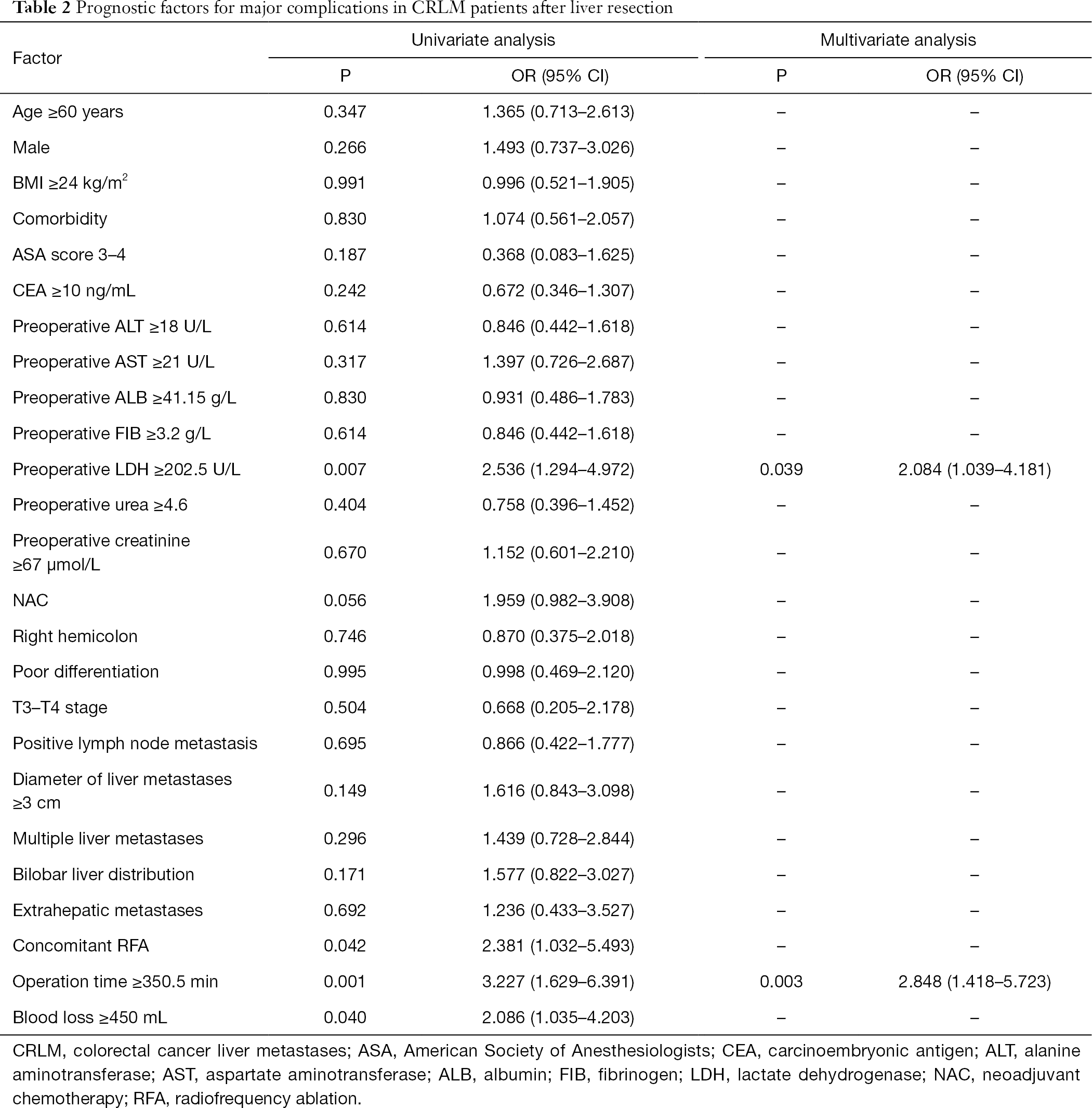 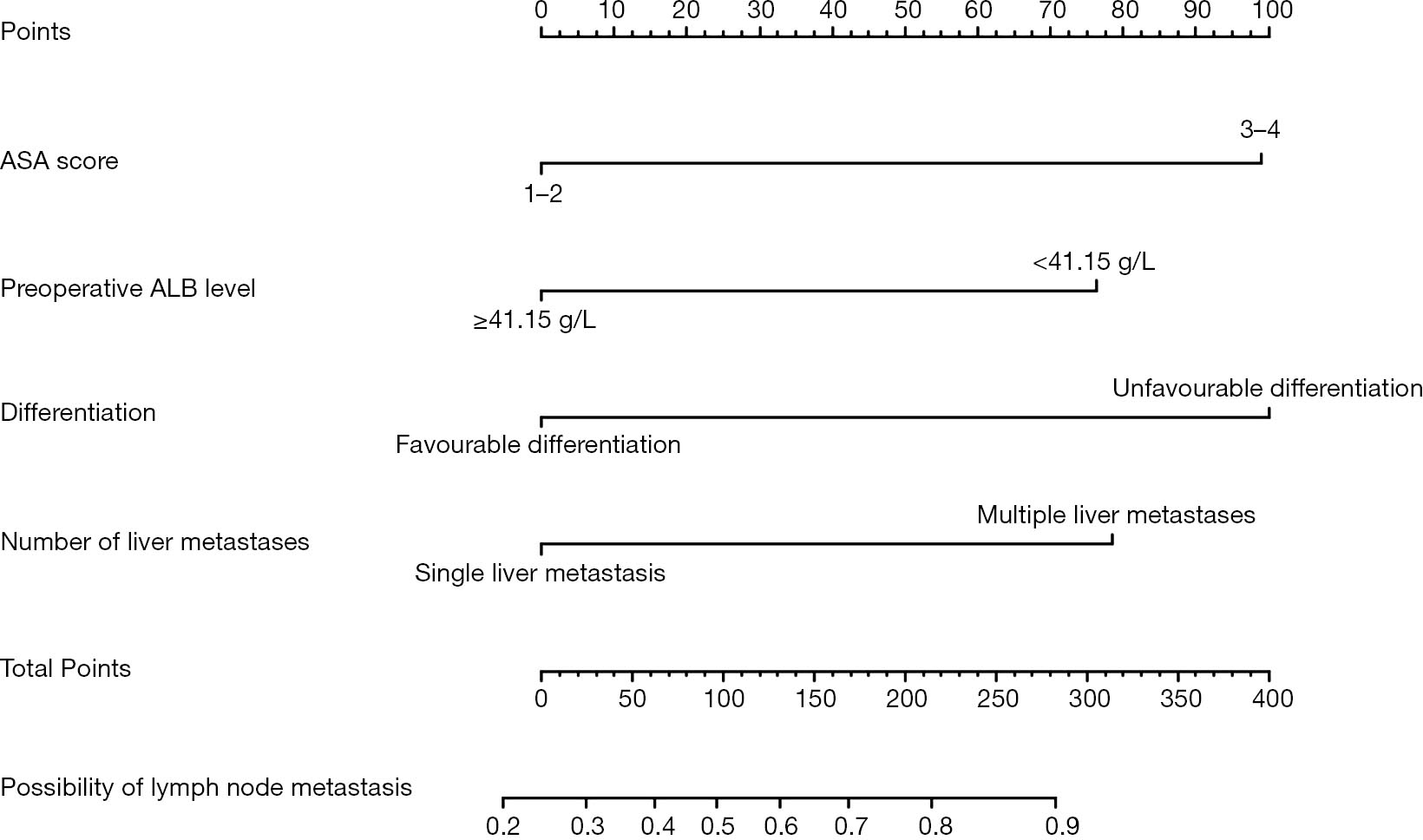 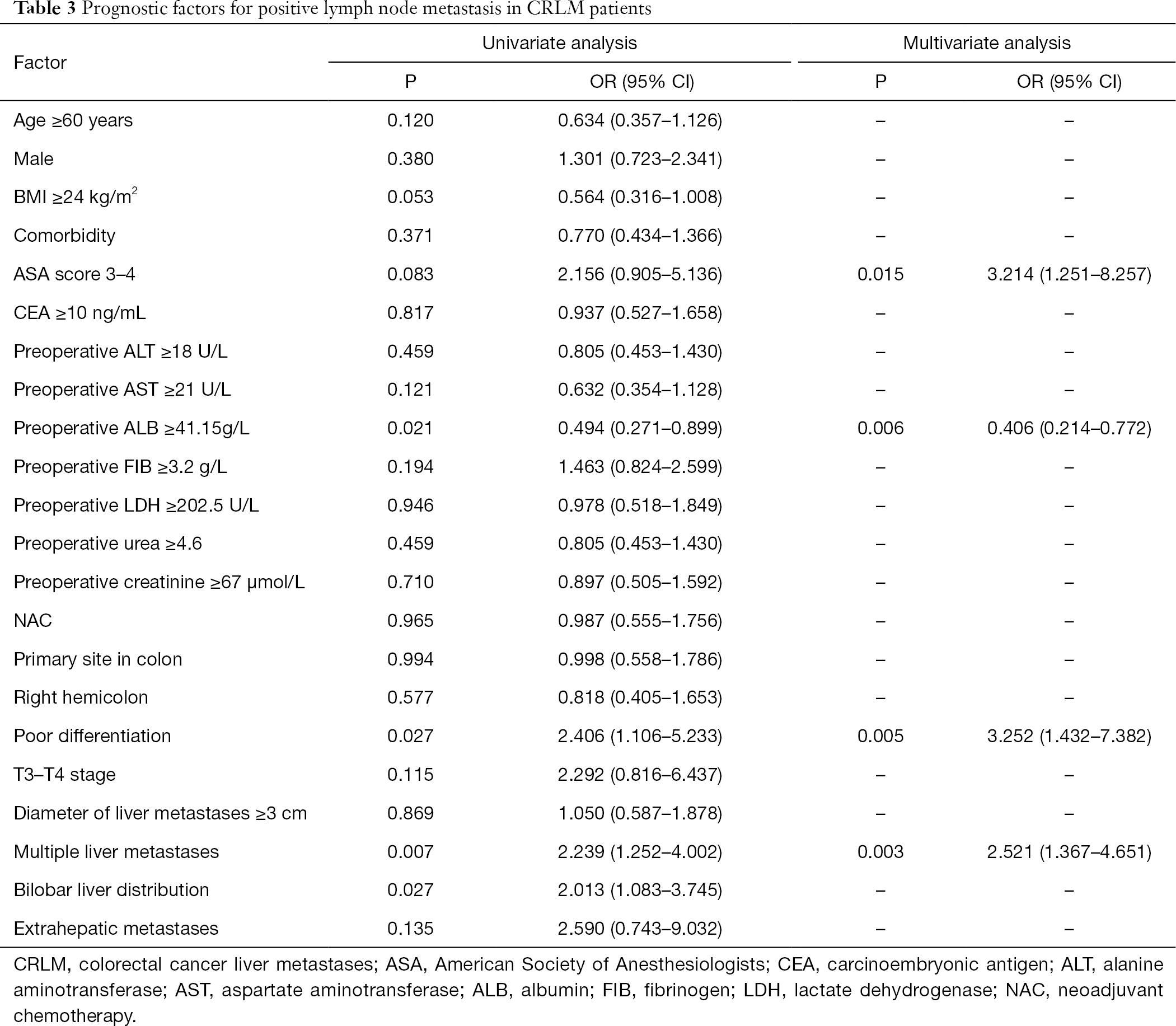 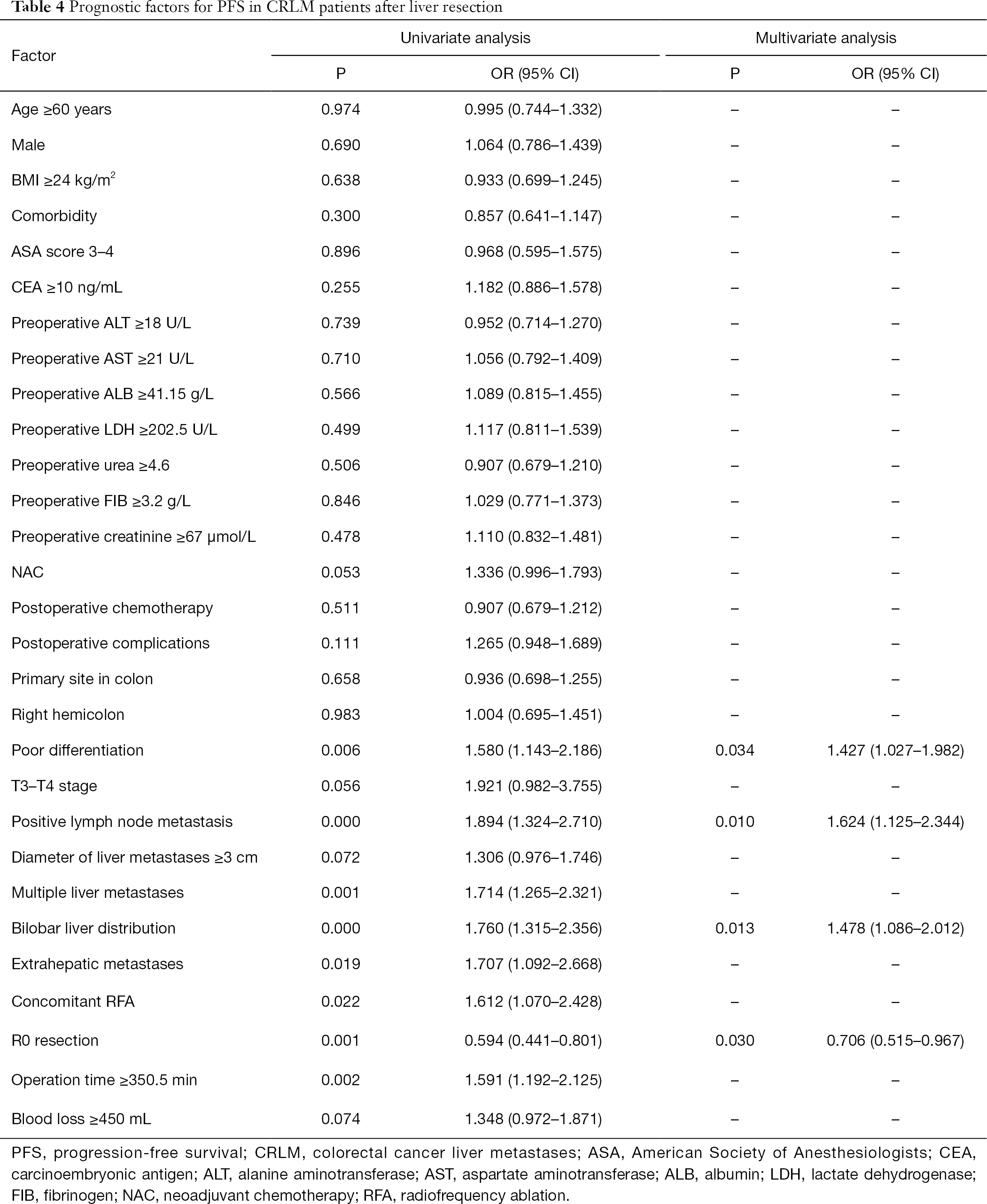 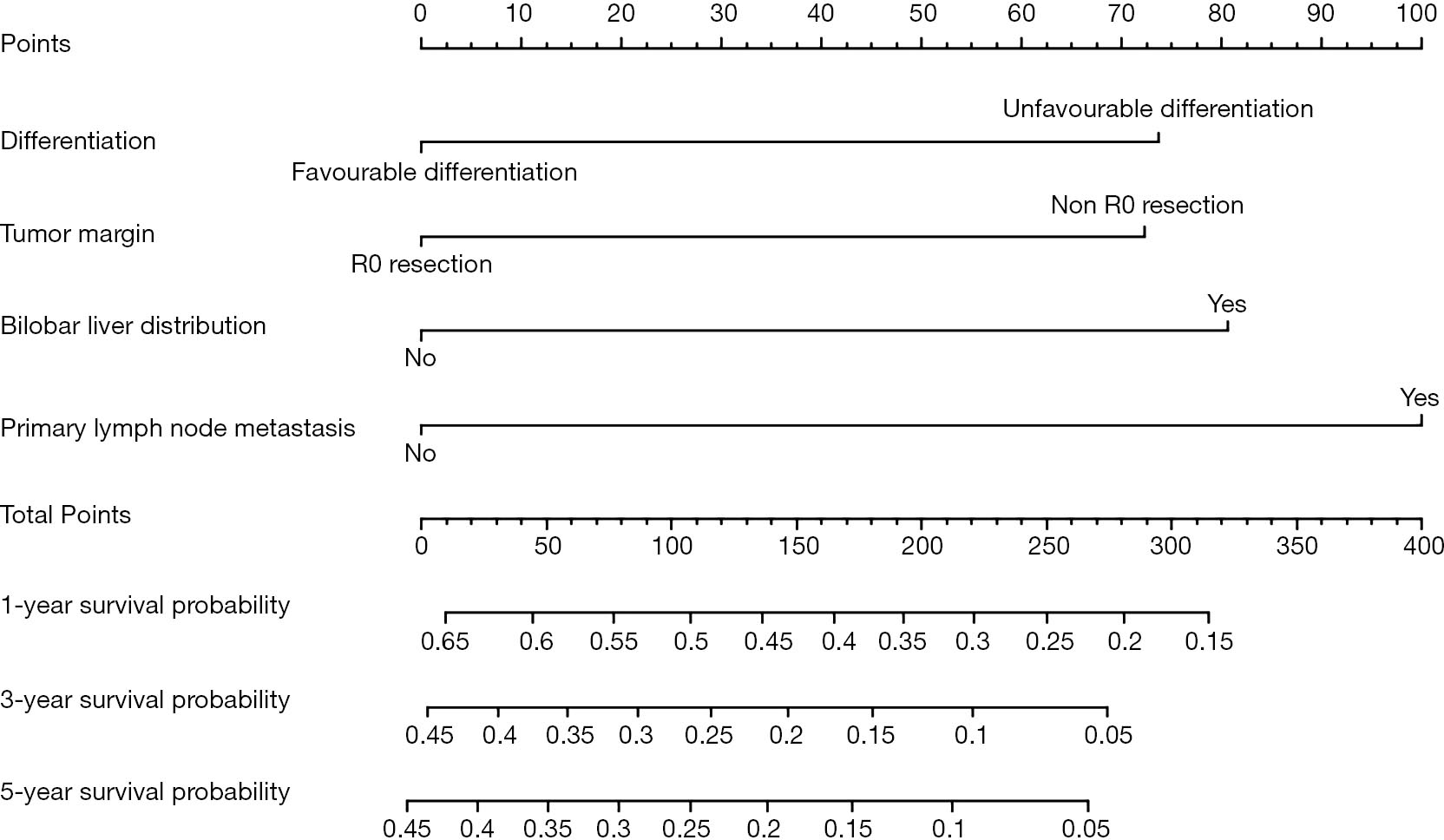 Figure 3 Nomogram for PFS. The sum of the scores for each variable was plotted on the total points axis. PFS, progression-free survival.

This study established nomograms specifically considering preoperative testing markers to predict primary lymph node metastasis and prognosis in patients with synchronous CRLM with simultaneous resection of CRC and liver metastases. Each independent factor has a different risky weight in the nomogram to quantify and specify when clinical strategies are determined for individual management and therapy.

This is the first study to investigate the independent predictors for postoperative major complications in patients with synchronous CRLM with simultaneous resection of CRC and liver metastases. Operation time ≥350.5 min and preoperative LDH ≥202.5 U/L were independently associated with the presence of postoperative major complications. The extended operation time was associated with more intraoperative blood loss and more difficult operational practice (30). In addition, the extended operation time suggested that patients would remain under anaesthesia status for a long time and that this long anaesthesia status could weaken their physical condition and immune function (31). Therefore, the relationship between the major complications and extended operation time can be foreseen. This study was the first to reveal that a preoperative high LDH level was an independently risky factor for major complications. LDH is a cytoplasmic enzyme that catalyses the final step of anaerobic glycolysis and is released in the bloodstream when cell damage and cell death occur (32,33). LDH serum levels are increased in many diseases, such as haemolytic anaemia, myocardial infarction, pulmonary embolism and rhabdomyolysis (34). In addition, it has been revealed that LDH promotes tumour growth, proliferation and the metastatic potential of neoplastic cells (32). Some studies have demonstrated that for CRC patients, serum levels of LDH were increased in cases of T4, N2 and M1 tumours and were related to poorer survival (35,36). Therefore, the association between preoperative increased LDH level and postoperative major complications was reasonable. Because there were only two predictive factors of major complications, a nomogram based on these two factors has not been established.

This study also established nomograms for the prediction of PFS in patients with synchronous CRLM with simultaneous resection of CRC and liver metastases. Regarding the independent prognostic factors in the nomograms, poor differentiation, positive lymph node metastasis, bilobar liver distribution and R0 resection were consistent with the findings of previous studies. Many studies pointed to a crucial correlation between clinical prognosis and the factor of poor differentiation of CRLM (37), and analogously from our study, we showed that poor differentiation was associated with an unfavourable PFS. The reason for the PFS reduction may be because poorly differentiated or de-differentiated tumours are more likely to invade neural and vascular structures and, hence, cross histological boundaries. In addition, Hodgson et al. (10) and Nakaseko et al. (11) similarly reported that patients with lymph node metastasis were independently associated with worse survival, which corresponded to our research results. Lymph node metastasis is related to tumour heterogeneity: the higher the level of lymph node metastasis, the higher the tumour heterogeneity. Consequently, the outcome of patients with CRLM can be determined by assessing the optimal cut-off value for the number of positive lymph nodes. Additionally, a study of CRLM following hepatic resection suggested that bilobar liver distribution was a common independent and significant predictor of PFS and OS (38). The bilobar liver distribution tends to have a heavy tumour load and a wider range of surgical resection and, therefore, can cause more serious damage to liver function. Generally, the relationship between the above independent prognostic factors and PFS was reasonable.

The present study has several limitations. First, this was a retrospective study in a single centre; thus, multicentre studies should be performed to provide stronger evidence. Second, further studies should be conducted to explore the underlying mechanisms between LDH, ALB and cancer biology. Third, the examination of KRAS status was expensive and is not currently covered by medical insurance in China. Therefore, the KRAS status was only available in 51.04% patients and was not incorporated in the present analysis.

In conclusion, this study investigated the independent factors for lymph node metastasis, postoperative major complications and PFS, specifically considering preoperative testing markers in patients with synchronous CRLM with simultaneous resection of CRC and liver metastases. Based on these factors, nomograms were constructed and proved to have good calibration and discrimination, which would be helpful for clinicians to make individualized predictions and to provide specific treatment recommendations.

Reporting Checklist: The authors have completed the TRIPOD reporting checklist. Available at http://dx.doi.org/10.21037/apm-20-2303

Conflicts of Interest: All authors have completed the ICMJE uniform disclosure form (available at http://dx.doi.org/10.21037/apm-20-2303). The authors have no conflicts of interest to declare.

Ethical Statement: The authors are accountable for all aspects of the work in ensuring that questions related to the accuracy or integrity of any part of the work are appropriately investigated and resolved. The study was conducted in accordance with the Declaration of Helsinki (as revised in 2013). Ethical approval was obtained from the Institutional Review Board of the Cancer Hospital, Chinese Academy of Medical Sciences (ID:NCC2019C-016). Informed consents have been obtained.