Pulmonary infection is characterized by substantial inflammation of the alveolar cavity, the interstitium of the lungs, and terminal airways. It is mainly caused by virulent bacterial infection, including by drug-resistant bacteria, or infection with multiple bacteria simultaneously, with Staphylococcus aureus and Streptococcus pneumoniae being the most frequent culprit pathogens. The major clinical characteristics of pulmonary infection include cough, increased respiratory secretions, and weakness (1,2). The severe pulmonary infection is a serious lung illness accompanied by varying degrees of abnormal parameters of respiratory mechanics which can stimulate the overexpression of multiple inflammatory factors. Among these overexpressed inflammatory factors, procalcitonin (PCT) and transforming growth factor β (TGF-β) are the most significant. Therefore, measurement of the levels of these 2 growth factors can be used to evaluate the severity of pulmonary infection (3,4).

Year-round residents of plateau areas are prone to developing upper respiratory tract infections and secondary pulmonary infections. Long-term exposure to low oxygen, low air pressure, and cold can cause dryness and congestion of the upper respiratory tract, which is conducive to respiratory infections. If a severe pulmonary infection is complicated by a serious condition, a delay in treatment may even result in acute respiratory failure, which dramatically threatens the health and life of the patient (5,6). Timely control of the infected lesions is important for the effective treatment. At present, anti-infective treatment is still in a simple and systematic research stage. The effective concentration of drugs in the local lesions is often low; moreover, the application of broad-spectrum antibacterial drugs has led to an increase in drug-resistant strains, which makes constraining infections even more difficult to effectively accomplish (7). The key to treating a severe pulmonary infection is to support the patient to breathe smoothly so that the medicine can work more effectively. Increased lung secretions have been reported to lead to airway obstruction (8), increase the difficulty of expectoration, induce the accretion of irritating substances, and induce a series of cascade reactions. As a precision inspection method, fiberoptic bronchoscopy is widely used to diagnose and treat a variety of bronchial illnesses. It can eliminate sputum and visible inflammatory secretions, and can help to completely flush the patient’s lesions, therefore allowing for better control of the pulmonary infection (9).

The purpose of the present research was to investigate the therapeutic effectiveness of bronchoalveolar lavage (BAL) under fiberoptic bronchoscopy in patients with severe pulmonary infection residing in the Tibetan plateau area, and to provide a clinical reference. We present the following article in accordance with the CONSORT reporting checklist (available at http://dx.doi.org/10.21037/apm-21-470).

This study enrolled 148 patients with severe pneumonia of various causes who were admitted to the comprehensive intensive care unit of Shigatse People’s Hospital (Shigatse, Tibet Autonomous Region, China) between July 2019 and January 2021. Patients were randomly assigned to the observational group or the control group. The criteria for patient inclusion were: (I) severe lung infection confirmed by laboratory examination and imaging examination; (II) bronchoscopy and treatment could be tolerated. Patients with mental illnesses were excluded, as were those with a tendency to severe bleeding or with blood coagulation mechanism disorders. All procedures in this study involving human participants were performed in accordance with the Declaration of Helsinki (as revised in 2013). Informed consent was taken from all the patients. The study protocol was approved by the ethics committee of Shanghai Ninth People’s Hospital (No. 2021RSYLL001).

Control group patients received conventional treatment, such as anti-infective treatment, mechanical ventilation, and symptomatic treatment. In addition to the treatments received by the control group, patients in the observational group underwent BAL under fiberoptic bronchoscopy. Assess the patient’s recovery after 1 month of treatment.

The specific operating procedures for BAL under fiberoptic bronchoscopy were as follows. The patient was given a subcutaneous injection of atropine 15 minutes before the operation. If the stress felt by the patient was too much, 10 mg diazepam would be injected 30 minutes before the operation. After that, the patient was anesthetized with lidocaine, delivered by inhalation. The trachea was then checked with a fiberoptic bronchoscope, the sputum was sucked, and a bacterial sputum culture was carried out. Following that, the fiberoptic bronchoscope front end was extended to the bronchial opening of the lung segment for lavage. The special catheter of the fiberoptic bronchoscope was inserted into the biopsy hole for lavage in stages. Sterile normal saline was used as the lavage fluid; the temperature of the saline was maintained at 37 °C, and the volume of saline for each lavage was 10–15 mL, with the total volume being less than 200 mL. For each lung segment, lavage was performed 2 to 3 times. If a blood clot or spittoon was found during the procedure, it was crushed with a biopsy clip and sucked out. Finally, the fiberoptic bronchoscope was inserted into subsegments for the injection of amikacin, metronidazole, and amoxicillin. The injections were delivered over 5 to 10 minutes, once a day, for 1 week. Both the observational and control groups received the same comprehensive care during their treatment.

All data were expressed as the mean ± standard deviation or number of cases (percentage). Differences between groups were compared by t-test, and chi-square test was used to evaluate percentage differences. Pearson’s correlation was used to analyze the correlations between bronchial lavage under fiberoptic bronchoscopy and the levels of inflammatory factors. Logistic regression was used to analyze the correlation between the bronchial lavage under fiberoptic bronchoscopy and the effectiveness of the treatment. Statistical analyses were performed with SAS version 9.4 software (North Carolina State University, United States, North Carolina), and differences were statistically significant when P<0.05.

Basic information of the research participants

Comparison of the basic patient information of the observational and control groups showed that the 2 groups were similar before treatment, and there were no statistically significant differences (Table 1). 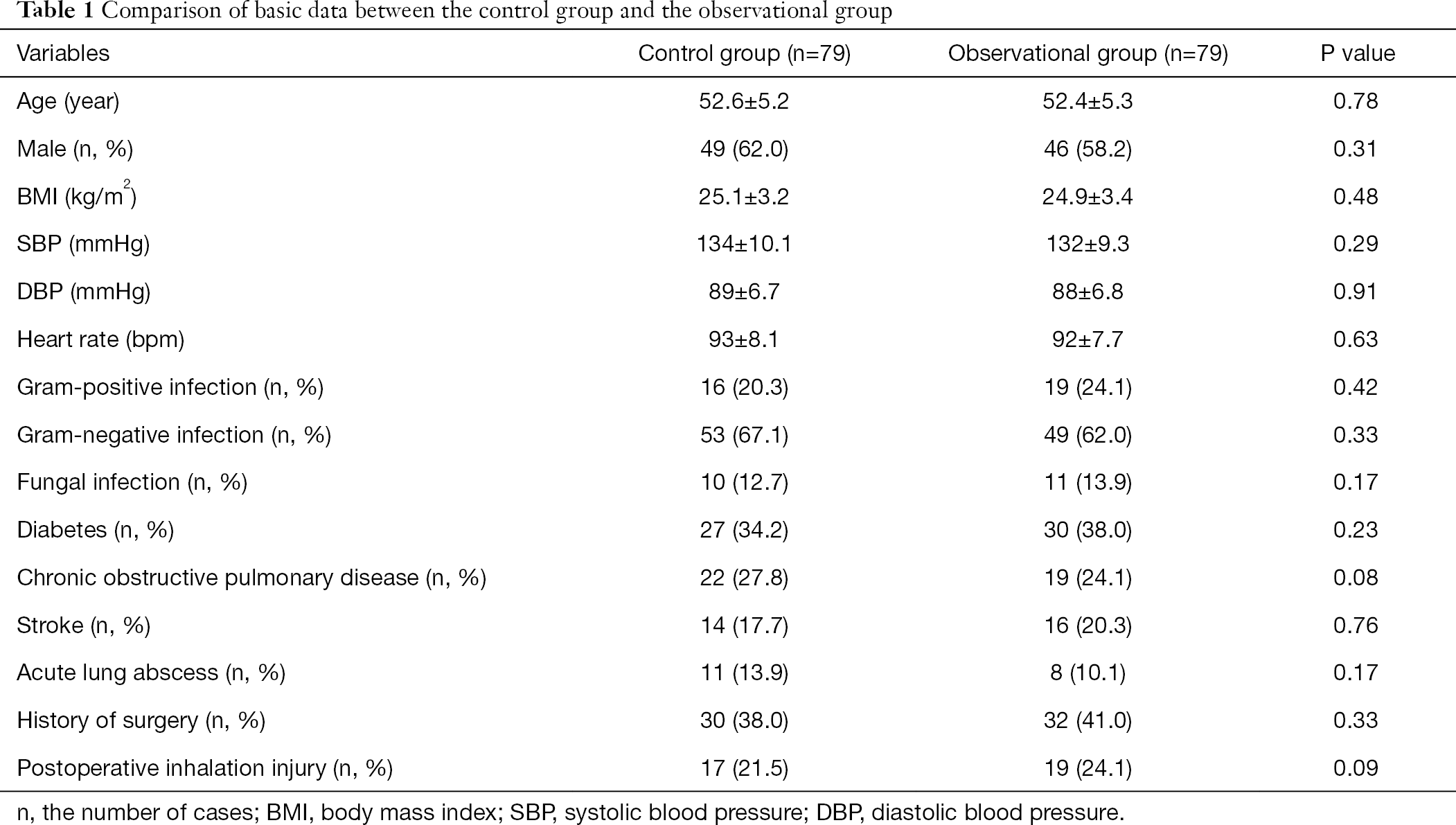 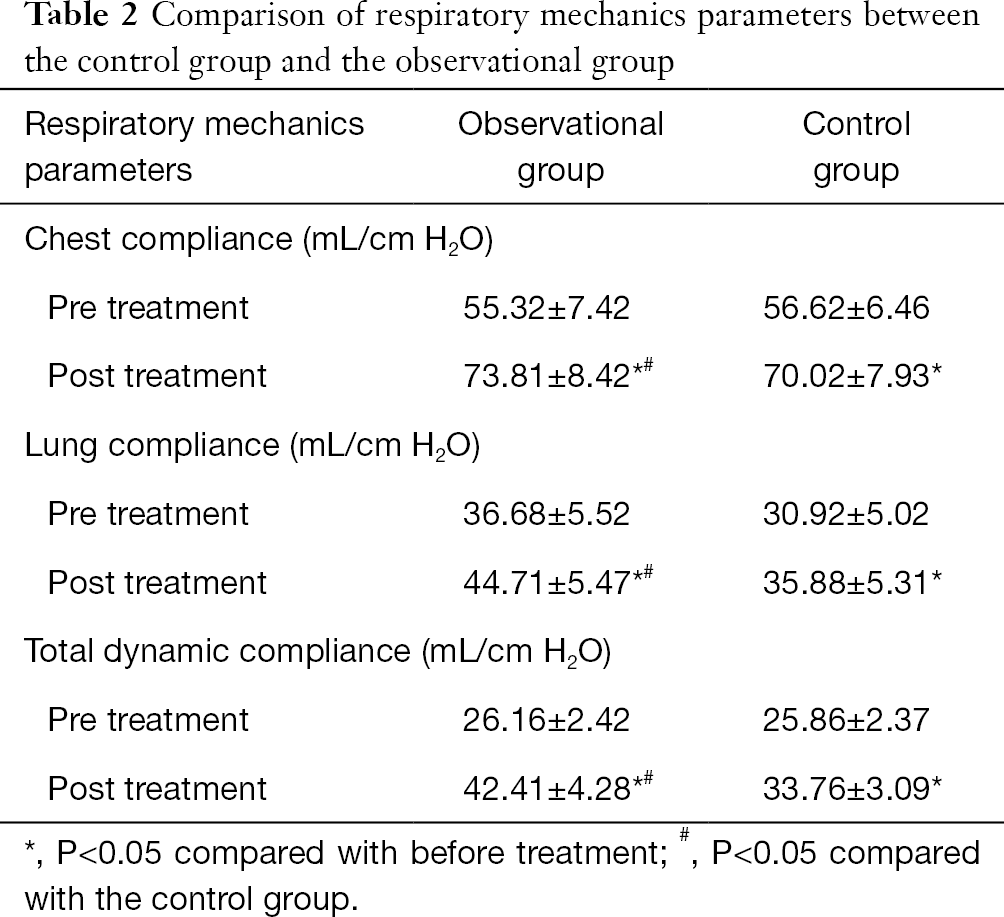 As shown in Table 3, a comparative analysis of the inflammatory factor levels (PCT and TGF-β) of the observational group and the control group before treatment showed no statistically significant difference in the levels of PCT or TGF-β (both P>0.05). After treatment, the inflammatory factor indexes in both groups showed significant improvements compared with those before treatment (all P<0.05). Furthermore, the levels of inflammatory factors in the observational group were significantly lower than those in the control group (PCT: 2.51±0.47 vs. 6.63±0.52 µg/L; TGF-β: 85.69±11.63 vs. 98.77±11.39 ng/L) (all P<0.05). 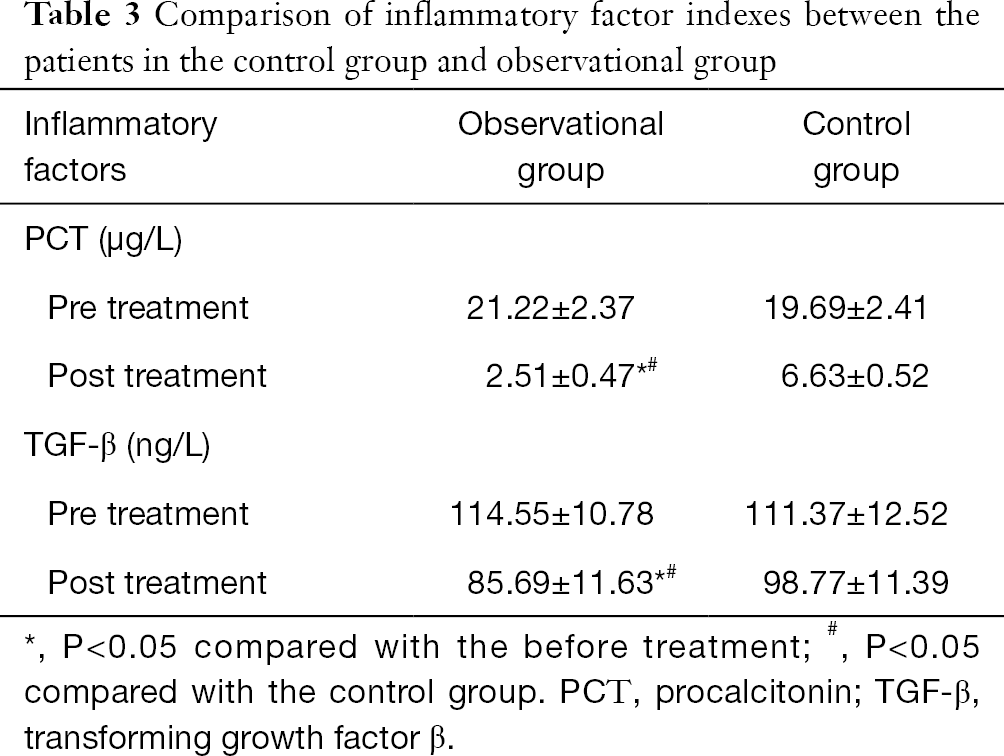 Patients with severe pulmonary infections have limited systemic activity and reduced ability to excrete sputum independently, which can result in thick sputum and the accumulation of secretions, and thus increases the risk of airway blockage (10,11). Studies have shown that the treatment of severe pulmonary infections should focus on fighting the infection, removing foreign bodies in the respiratory tract, and ensuring that the respiratory tract is clear of blockages (12). Studies have also found that current anti-infective treatments for severe pulmonary infections are not ideal. Recently, BAL under fiberoptic bronchoscopy has been gradually applied in clinical practice. Clinical experience has proved that fiberoptic bronchoscopy not only has the benefits of non-invasiveness and high efficacy, but that it can also reduce the impairment to airway mucosa (13,14). Research has shown that small-cavity fiber bronchoscopes can penetrate small lesions, enable accurate observation of lung lesions directly, and provide dynamic and clear bronchial images (15,16). These benefits are conducive to gaining an effective understanding of the progression of the disease, and to the clearing of respiratory secretions as well as foreign bodies, sputum, and blood clots, which can also help to alleviate bronchial obstructions in asthma and quickly enhance ventilation (17,18). A European study of 400 patients with severe lung infections showed that BAL has a significant effect on improving lung infections (19). Our research demonstrated that BAL under fiberoptic bronchoscopy shortened the duration of mechanical ventilation and reduced the use of antibiotics compared with the control treatment. Furthermore, the effects of the treatment with respect to respiratory failure correction, lowering body temperature, and recovering white blood cells were also significantly better in the observation than in the control group. Therefore, our findings suggest that BAL under fiberoptic bronchoscopy can effectively relieve heavy bleeding, small airway interference, restore breathing, increase the oxygen content in the blood, and help to reduce cerebral edema, thereby accelerate the recovery. At the same time, the effectiveness of treatment in the observational group was significantly compared to the control group, suggesting that BAL can effectively improve the treatment effectiveness, which is consistent with the conclusions of previous studies (20).

The pulmonary infection of severity may affect alveolar oxygenation because of airway hinderance, which can lead to a disorder of oxygen and carbon dioxide exchange as well as changes in the patient’s respiratory mechanics parameters (21). The results of this study showed that the respiratory mechanics parameters of patients following BAL under fiberoptic bronchoscopy were significantly improved compared to those of conventionally treated patients, and the treatment also showed significantly greater effectiveness than conventional treatment. These findings suggest that BAL under fiberoptic bronchoscopy can improve the respiratory status of patients.

Severe pulmonary infections have been reported to induce systemic inflammation and cause the unrestrained release of pro-inflammatory factors (22). PCT consists of calcitonin and N-residues, which can inhibit the expression of the calcitonin gene when the host is not infected; therefore, in healthy people, the concentration of PCT is typically very low (23). However, during pathogenic infection, the expression of the calcitonin gene in the human body is up-regulated, which subsequently increases the level of PCT in the serum. Serum PCT can be used as a dependable index of severe infection to reveal the body's condition. TGF-β is a polypeptide growth factor which is enriched in human kidney and lung tissues. It is typically released by lymphocytes and eosinophils, or by airway epithelial cells in the lungs (24). A variety of external stimuli can cause inflammation of the airways, thereby damaging the airway epithelium and increasing inflammation, as well as the secretion of TGF-β (25). In this study, the patients in both the observational and control groups had reduced levels of PCT and TGF-β postoperatively; however, the decrease in the observational group was more significant than that in the control group, which indicates that BAL under fiberoptic bronchoscopy can effectively improve the local microenvironment. Furthermore, when sensitive antibiotics were injected directly into the lesion under fiberoptic bronchoscopy, there was a higher concentration of antibiotics in the lesion than there was with intravenous delivery; thus, the former approach is more effective for achieving an anti-inflammatory effect than the latter. This study has certain limitations. First of all, the sample size of this study is small, and the conclusions of this study need to be verified in a larger study. Secondly, this study only included changes in PCT and TGF-β, and more inflammatory factors, such as IL-1β, IL-6, etc., need to be included for a more adequate assessment of changes in inflammation.

Funding: This study was supported by Shanghai Science and Technology Commission Fund (20035800300).

Reporting Checklist: The authors have completed the CONSORT reporting checklist. Available at http://dx.doi.org/10.21037/apm-21-470

Conflicts of Interest: All authors have completed the ICMJE uniform disclosure form (available at http://dx.doi.org/10.21037/apm-21-470). The authors have no conflicts of interest to declare.

Ethical Statement: The authors are accountable for all aspects of the work in ensuring that questions related to the accuracy or integrity of any part of the work are appropriately investigated and resolved. All procedures in this study involving human participants were performed in accordance with the Declaration of Helsinki (as revised in 2013). Informed consent was taken from all the patients. The study protocol was approved by the ethics committee of Shanghai Ninth People’s Hospital (No. 2021RSYLL001).