The occurrence and treatment of hemophagocytic lymphohistiocytosis caused by multiple factors: a case report and literature review

Hemophagocytic lymphohistiocytosis (HLH) is a highly fatal disease that is characterized by pathological inflammatory response (1,2). HLH can be classified as primary HLH (pHLH), which is related to hereditary genetic defects, or secondary HLH (sHLH), which is caused by a variety of underlying diseases.

In recent years, research on HLH has gradually deepened to reveal a relationship between pHLH and sHLH. Increasingly, it has been shown that sHLH patients carry genetic alterations, but triggered by secondary factors.

Here, we report the case of a 20-year-old male patient with aggressive natural killer cell leukemia (ANKL) complicated by mutations in LYST and UNC13D, which eventually led to the onset of HLH. After receiving hematopoietic stem-cell transplantation (HSCT), the patient achieved complete remission. Investigation of the patient’s pedigree revealed that mutations of LYST and UNC13D were inherited from his parents, but neither parent had the disease.

We present the following article in accordance with the CARE reporting checklist (available at http://dx.doi.org/10.21037/apm-21-68). 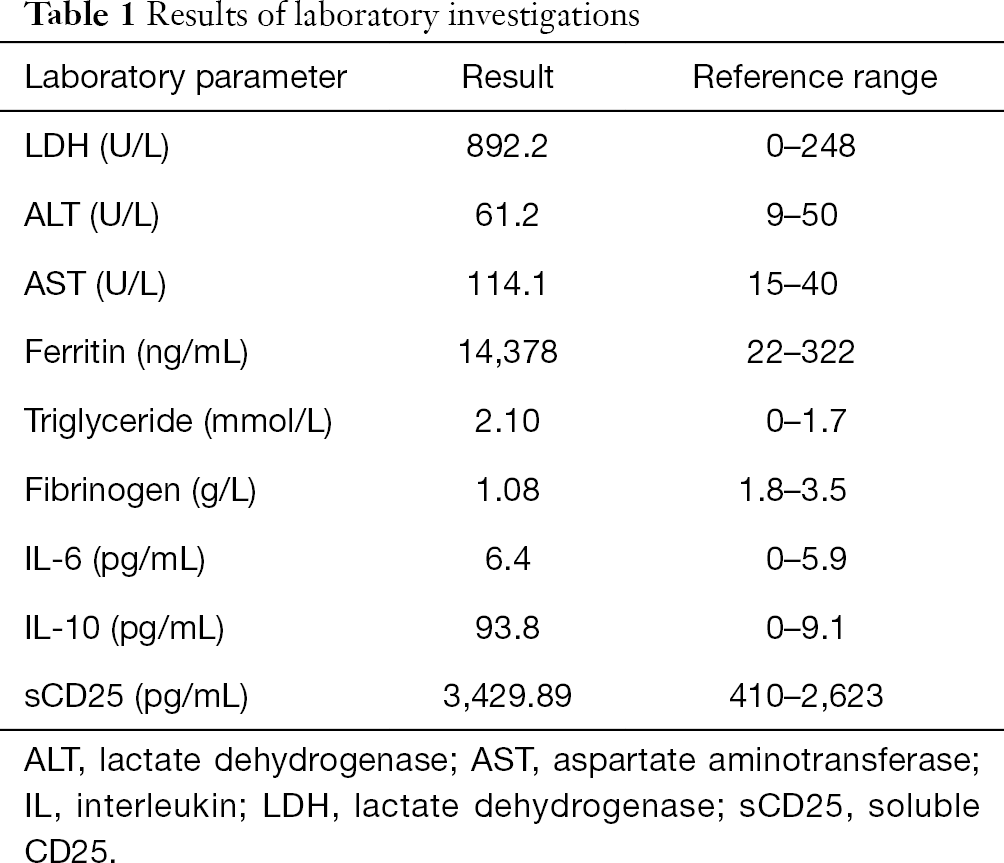 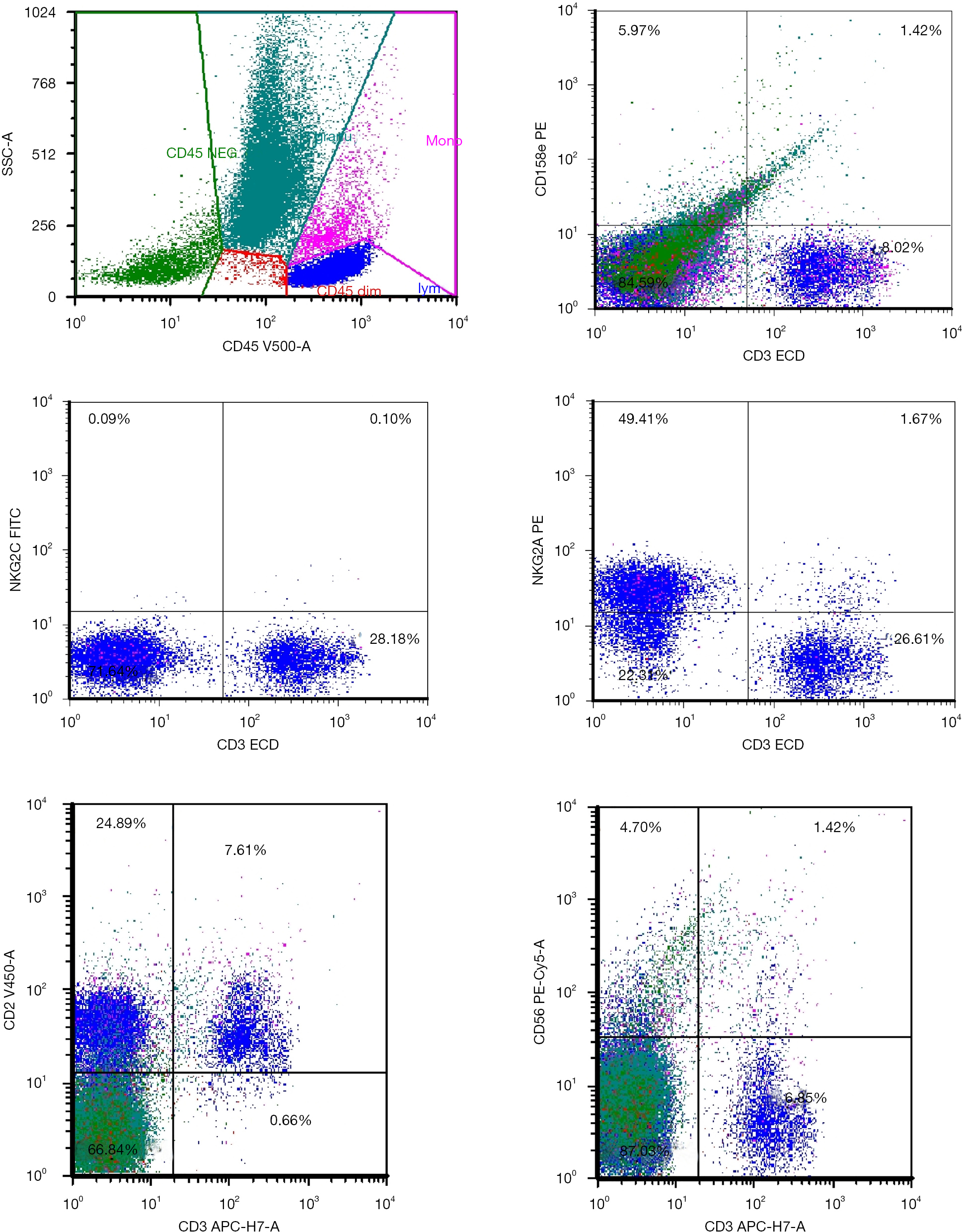 Figure 2 Pedigree analysis of the patient.

On the basis of the patient’s results, the following diagnosis was made: (I) ANKL (with CREBBP mutation); (II) primary hemophagocytic syndrome (with mutations in LYST and UND13D). The patient subsequently received 4 courses of EPOCH + PEG-Asp-based chemotherapy [etoposide (100 mg/d, days 1–3), dexamethasone (10 mg/d, days 1–5), vindesine (4 mg/d, day 1), cyclophosphamide (1.2 g/d, day 5), liposomal doxorubicin (40 mg/d, day 1; 20 mg/d, day 2), and pegaspargase (3,750 IU/d, day 6)], The treatment effect was evaluated as partial remission. On May 9, 2018, the patient was admitted to a laminar flow ward for unrelated donor HSCT. He underwent a conditioning regimen with total-body irradiation/etoposide/cyclophosphamide (TBI/VP16/Cy), and received peripheral blood HSCT (total nucleated cells 13.9×108, CD34+ 7.07×106 per kg recipient body weight) on May 14, 2018. The patient was also administered cyclosporine and mycophenolate mofetil as graft-versus-host disease prophylaxis. The patient achieved neutrophil and platelet engraftment on days 9 and 11 after the treatment, respectively. His disease remission continued post-transplant, and no maintenance therapy was required. Almost 3 years after the follow-up transplant, the patient was still alive and had returned to university.

In the current case report, the patient was a 20-year-old male with good health since childhood. The clinical manifestations of the patient were a persistent high fever, fatigue, splenomegaly, cytopenia, hyperferritinemia, hypofibrinogenemia, elevated levels of sCD25, and hemophagocytosis in bone marrow. At present, the diagnosis of HLH in adults should be based on the HLH-2004 diagnostic criteria as well as clinical judgment and the patient’s history (10). Furthermore, the combination of inflammatory cytokines (significantly increased levels of interferon-γ (IFN-γ) and IL-10, with a slightly increased IL-6 level) has high diagnostic accuracy for HLH (11,12). According to the HLH-2004 standard, our patient met 7 of the 8 diagnostic criteria, and his clinical manifestations also supported HLH.

An interesting observation about this case is that immunophenotyping revealed that the patient’s bone marrow was positive for CD2 and CD16, and negative for sCD3 and CD56, with no abnormal B cell or T cell expression. Although the patient’s EBV-DNA test was negative, according to the World Health Organization 2016 criteria and his clinical manifestations, he met the diagnosis of EBV-negative aggressive NK-cell leukemia (with CREBBP mutation). Screening for HLH-related genes revealed the patient to have heterozygous mutations in LYST and UNC13D, which were inherited from both parents. However, neither of the patient’s parents had developed the disease, indicating that the patient developed HLH due to mutations in the defective genes and with ANKL as the trigger. More than two heterozygous mutations HLH-associated genes have been described in some patients, and have a synergistic deleterious effect (13). In terms of treatment, considering the patient’s diagnoses of ANKL and HLH, the EPOCH+PEG-Asp regimen was selected (14-16), and best supportive treatment was given. However, the patient’s routine blood results did not return to normal. And due to defective genes, HSCT was considered to be the only suitable treatment option. Following unrelated donor HSCT, the patient’s disease was alleviated. As of 2020-10-19, he had achieved long-term survival and had returned to his studies.

There appears to be no distinct boundary between primary and secondary HLH. Instead, multiple factors combine, culminating in the final pathway to HLH—cytokine storm. Studies of the mechanism underlying the occurrence of pHLH in children have been performed, but it is still unclear. In an animal model study, perforin double knockout (Prf1−/−) mice do not spontaneously develop HLH-like symptoms, but they manifest all of the features of HLH after infection with lymphocytic choriomeningitic virus (LCMV) (17). Another model found that the accumulation of monoallelic mutations increased the risk of developing HLH immunopathology after lymphocytic choriomeningitis virus infection (18). These findings suggest that in addition to innate immunodeficiency, external environmental factors, such as viral infection, are involved in triggering the development of the disease. Therefore the threshold for the development of HLH is when lymphocyte cytotoxicity can no longer maintain immune homeostasis.

Most patients with pHLH develop the disease before the age of 2. However, with the development of molecular diagnostic technology, it has been confirmed that pHLH can also affect older people. In fact, the oldest patient was 75 years old among the previous case reports (19). Clinicians should be aware of the possibility of pHLH in some adults, especially in patients with recurrent HLH, EBV infection, or unknown etiology. In this situation, pHLH-related tests should be considered, because which determines the choice of stem-cell transplantation for treatment. AlloSCT is necessary for patients with HLH mutations, but there are still some issues to be further discussed, such as the conditioning regimens and the selection of related donors (20-22).

Reporting Checklist: The authors have completed the CARE reporting checklist. Available at http://dx.doi.org/10.21037/apm-21-68

Conflicts of Interest: All authors have completed the ICMJE uniform disclosure form (available at http://dx.doi.org/10.21037/apm-21-68). The authors have no conflicts of interest to declare.