Six Sigma methodology was gradually applied in hospital management since 1999 in China (12), and it was applied at our hospital within recent several years. In the present study, we retrospectively collected data of ESRD patients receiving different nursing care and investigated whether Six Sigma methodology could reduce the incidence of depression and anxiety in these patients. We present the following article in accordance with the STROBE reporting checklist (available at http://dx.doi.org/10.21037/apm-21-254).

The present study was a retrospective study conducted at Haian People’s Hospital (Nantong, China) and comprised ESRD patients undergoing hemodialysis from March 2018 to February 2020. All adult patients who underwent hemodialysis for at least 3 months prior to the study were enrolled. The following patients were excluded: those older than 80 years old, suffering from other life-threating comorbid diseases or psychological diseases, and participating in other clinical trials. Patients were divided into the control and study groups according to the type of nursing care they received. The present study was approved by the Ethics Committee of Haian People’s Hospital, but informed consent was not necessary due to it retrospective design. All procedures performed in this study involving human participants were in accordance with the Declaration of Helsinki (as revised in 2013).

Patients in the control group received routine nursing care, and those in the study group received Six Sigma methodology, which comprised five steps as follows: definition, measurement, analysis, improvement, and control. First, management was defined to reduce the level of psychological conditions in ESRD patients so that patients were willing to cooperate with medical stuff and improve their quality of life. Second, a psychological nursing team was established to focus on the psychological management of ESRD patients. Third, a team meeting was held every week to discuss and analyze the causes of psychological conditions, such as lack of knowledge, economic burden, and decreased self-evaluation. Fourth, improvement measures were discussed and implemented based on the results of the analysis; for example, increasing patients’ understanding of the necessity, reliability, and safety of hemodialysis, helping patients to use positive self-reward to increase positive behaviors, guiding patients to learn relaxation techniques to promote feelings of comfort, and encouraging patients to identify and reduce their negative thinking. Finally, the function of the control step was the implementation of health education, strengthening the importance of psychological nursing.

We collected data from 251 ESRD patients undergoing hemodialysis during a period of 2 years. These patients were then divided into two groups, with 112 patients in the control group receiving conventional nursing care and 139 patients study group receiving Six Sigma methodology. The characteristics of the enrolled patients were listed in Table 1. The majority of patients were relatively older patients; patients >40 years old accounted for 64.5% of the total number of patients. Around 68.1% patients were males, and the BMI of nearly half of patients was <20. Only 18.7% patients had a tertiary education and 80.1% patients were married and lived with their partner. More than half of the enrolled patient had undergone hemodialysis for more than 1 year and <3 years, and 34.2% patients had undergone hemodialysis for more than 3 years. We also recorded the patients’ psychological conditions and found that that 47.8% and 36.3% of patients were diagnosed as having depression and anxiety at admission, respectively. There were no significant differences in the collected characteristics between the study group and the control group. 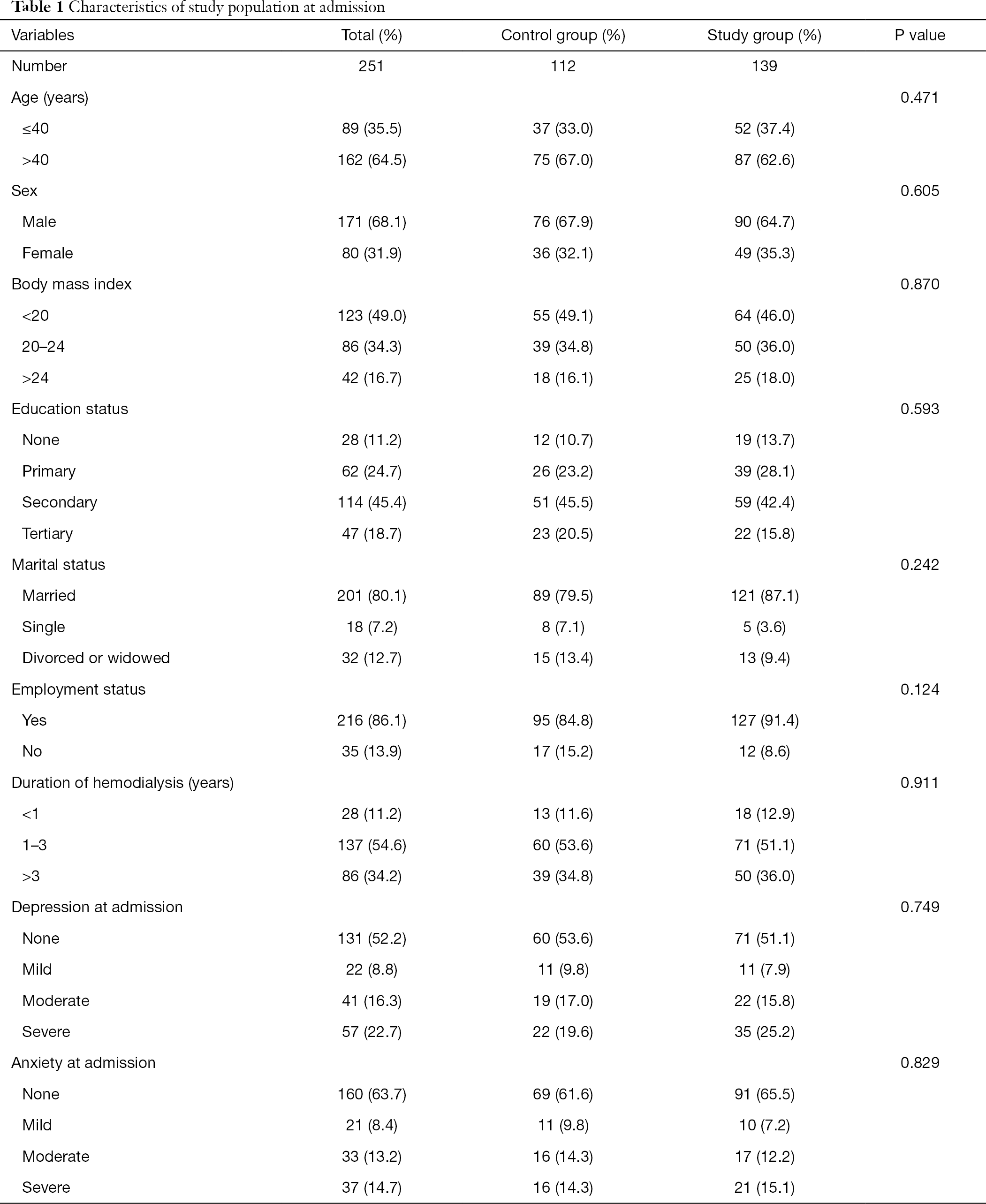 The incidences of depression and anxiety at discharge were recorded as outcome variables, as shown in Table 2. It was found that the incidence of depression was 50.9% in the control group and 39.6% in the study group, indicating a significant difference between them (P=0.018). Similarly, the incidence of anxiety was 27.6% in the study group, which was much lower than the 44.6% reported in the control group (P=0.002). The change in different levels of depression in both groups is shown in Figure 1. It was noted that some patients with mild and moderate depression could be relieved after Six Sigma methodology, and routine nursing care was found to not have a significant impact on patients’ emotion. The change in different levels of anxiety is shown in Figure 2. Six Sigma methodology was effective in relieving mild and moderate anxiety according to the results. However, Six Sigma methodology was not significantly beneficial to the relief of depression and anxiety in the present study. 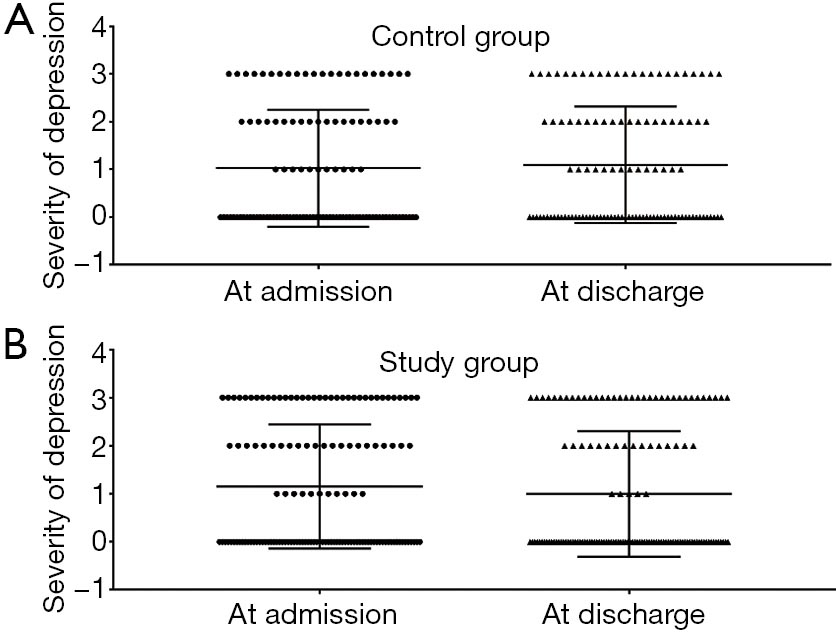 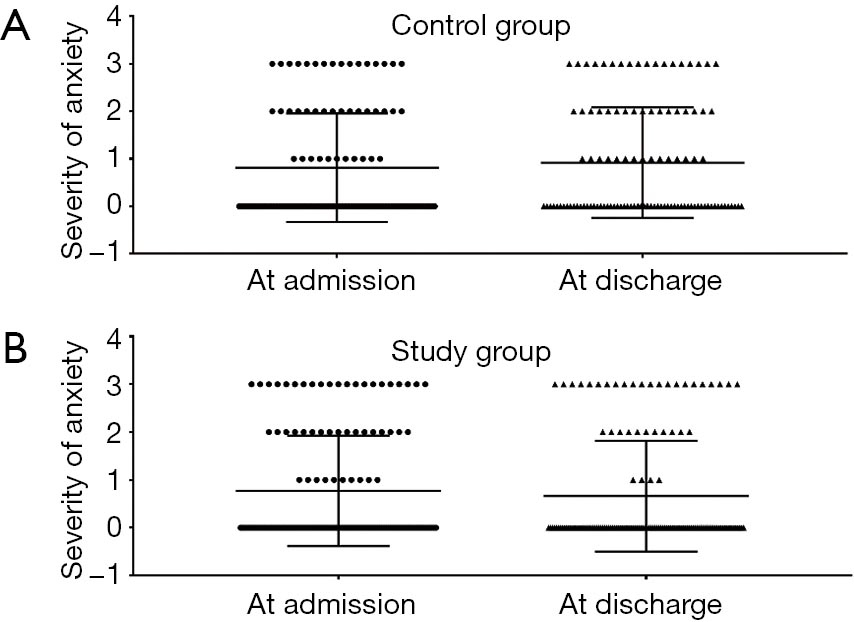 In the present study, we summarized the data of ESRD patients undergoing hemodialysis at a single center within a period of 2 years. The incidence of depression at discharge was 44.6% and that of anxiety at discharge was 34.7%. These incidences were similar to those reported in previously published studies (5,13), indicating that psychological conditions are common in ESRD patients. Previous studies have indicated that depression and anxiety worsen quality of life in ESRD patients (14,15). Efforts have been made to relieve psychological conditions using psychotropic medications or non-pharmacological therapy (16,17). According to a previous study, only a small group of ESRD patients with depression received either psychotropic medications or non-pharmacological therapy (18). It is still unclear whether psychotropic medications are tolerable and efficacious in ESRD patients. The effectiveness of non-pharmacological therapy, which mainly refers to cognitive-behavioral therapy, was confirmed in several studies with small sample sizes (19,20).

Other risk factors of depression and anxiety were also identified in the present study. Age was a significant predictor of anxiety and depression, which was similar to the results of a previous study (3). Married patients were more likely to be depressed or anxious according to our study. However, previous studies have different opinions on the impacts of marital status on psychological condition (7,13). We believe that marital status and living with family is more conducive to the psychological condition of patients, as they provide patients with support and reduce their psychological stress.

The present study has some limitations. First, most patients underwent hemodialysis for a relatively short period (<3 years, 65.8%). Therefore, it was unclear whether these results are applicable to patients who have undergone hemodialysis for longer periods of time. Second, we did not record the prognosis and quality of life due to the short follow-up of less than 3 years. Third, depression and anxiety were diagnosed by the SAS and SDS scores instead of a psychiatrist. Some novel scales to assess depression and anxiety have been proposed in recent years, which may be superior to the SDS and SAS (2,23,24). Further studies are needed to verify their effectiveness in ESRD patients.

Funding: This work was supported by the Social Livelihood Science and Technology Foundation of Nantong (MSZ18190).

Reporting Checklist: The authors have completed the STROBE reporting checklist. Available at http://dx.doi.org/10.21037/apm-21-254

Conflicts of Interest: All authors have completed the ICMJE uniform disclosure form (available at http://dx.doi.org/10.21037/apm-21-254). The authors have no conflicts of interest to declare.

Ethical Statement: The authors are accountable for all aspects of the work in ensuring that questions related to the accuracy or integrity of any part of the work are appropriately investigated and resolved. The present study was approved by the Ethics Committee of Haian People’s Hospital, but informed consent was not necessary due to it retrospective design. All procedures performed in this study involving human participants were in accordance with the Declaration of Helsinki (as revised in 2013).