Diabetes is associated with a high risk of cardiovascular and renal diseases (1,2). The increased incidence of diabetes in the past decades has become the major cause of end-stage kidney disease (3). Telmisartan, an angiotensin receptor blocker (ARB), is one of the most frequently used drugs for the treatment of hypertension. ARBs were first shown to be effective 19 years ago, and they are the only approved treatment for renoprotection in patients with type 2 diabetes (4,5). Telmisartan is a substrate of P-glycoprotein (P-gp/ABCB1), breast cancer resistance protein (BCRP/ABCG2), and multidrug resistance-associated protein 2 (MRP2/ABCC2). Specifically, telmisartan is a potent inhibitor of P-gp and a moderate inhibitor of MRP2 and BCRP (6,7).

Canagliflozin reduces blood glucose levels independently of insulin secretion via inhibition of the sodium glucose cotransporter 2 (SGLT2) receptors in the proximal renal tubules, leading to decreased renal reabsorption of glucose. Furthermore, SGLT2 inhibitors are a novel class of drugs that have been shown to be effective for the treatment of renal diseases, as demonstrated in the Canagliflozin and Renal Events in Diabetes with Established Nephropathy Clinical Evaluation (CREDENCE) and the Dapagliflozin and Prevention of Adverse outcomes in Chronic Kidney Disease (DAPA-CKD) clinical trials (8,9), both clinical trials required the participates to receive treatment with angiotensin-converting enzyme inhibitors (ACEIs) or ARBs, the combination of SGLT2 inhibitors and ARBs is a promising treatment therapy in renal disease, while the potential interactions have not been investigated. Considering that canagliflozin is a substrate of the three efflux transporters (10), modulation of P-gp, BCRP, and MRP2 activities by telmisartan may cause significant changes in the pharmacokinetic profile of canagliflozin. Compared to rats, mice have a higher amino acid homology of transporter proteins to humans (11-13), however, the pharmacokinetic experiment itself has many plasma volume, then we chose rats in consideration of animal welfare regulations for mice. For tissue distribution and subsequent molecular mechanism, we still chose mice as the experiment subjects.

Both SGLT2 inhibitors and ARBs act on tubuloglomerular feedback (TGF), with the former altering afferent arteriole vasoconstriction, while the latter changes efferent arteriole vasodilation (14,15). However, it remains unknown whether combined SGLT2 and ARB inhibition can normalize the intraglomerular hypertension and hyperfiltration associated with renal protection.

It is widely accepted that the concentration of a drug in the tissues is fundamental in determining its pharmacological effects and adverse effects. This study aimed to investigate whether co-administration of telmisartan alters the pharmacokinetics of canagliflozin. The plasma and tissue distribution of canagliflozin were assessed. The results provide clinical guidance regarding adverse drug reactions during co-administration of telmisartan and canagliflozin. We present the following article in accordance with the ARRIVE reporting checklist (available at http://dx.doi.org/10.21037/apm-21-65).

The optimized method used binary gradient mobile phases with water (containing 0.1% formic acid) as mobile phase A, and acetonitrile as mobile phase B. The gradient program was applied as follows: phase B was initially balanced at 40%, then linearly increased from 40% to 75% for 4 minutes, and slightly increased from 75% to 85% in 0.8 minutes. The pre-column equilibrium time was 1 minute and the flow rate was 0.25 mL/min. The prepared sample (3 µL) was injected into the UPLC-MS/MS system. The auto-sampler and column temperature were maintained at 4 and 40 °C, respectively.

The mass spectrometer was equipped with an electrospray ionization (ESI) source. The multiple reaction monitoring (MRM) analysis in the positive ion ESI mode was conducted by monitoring the ion transitions from m/z 462.2 to 191.0 for canagliflozin, and m/z 451.4 to 71.0 for empagliflozin (internal standard, IS), with the declustering potential set at 66.5 and 66 V, and collision energy at 35.1 and 20 eV, for canagliflozin and IS, respectively.

Male Sprague-Dawley rats (220±20 g) and male Kunming mice (26±2 g) were purchased from the Experimental Animal Center of Hebei Medical University (Shijiazhuang, China). Animal were housed in an environmentally controlled room (temperature: 25±2 °C, humidity: 55%±5%, 12-hour dark-light cycle), and given free access to water and food. The animals were fasted for 8 hours prior to the experiments, with free access to drinking water during the experiments. This study was approved by the Hebei General Hospital Ethics Committee (No.202103). All processes were performed according to the Guidelines for the Care and Use of Laboratory Animals of the Japanese Pharmacological Society.

In the pharmacokinetic studies, Sprague-Dawley rats were randomly divided into four groups (each group consisting of six replicates). Group A and B animals were administered canagliflozin with and without telmisartan for a single day, respectively. Animals in group C and D were administered canagliflozin with and without telmisartan for seven consecutive days, respectively. Compounds for oral gavage were mixed in 0.5% sodium carboxymethyl cellulose (CMC-Na) solution. The administered doses were 10 mg/kg for canagliflozin and 8 mg/kg for telmisartan. Blood samples (0.2 mL) were collected via the orbital vein in heparin-containing capillary tubes at 0, 1, 1.5, 2, 3, 4, 5, 6, 8, 10, 12, 24, and 48 hours after drug administration and centrifuged at 3,500 rpm for 10 minutes. The supernatant was transferred into a new tube and stored at −80 °C.

For the tissue distribution studies, the Kunming mice were randomly separated into three groups. These groups were given oral administration of 0.5% CMC-Na, canagliflozin (15 mg/kg), or canagliflozin (15 mg/kg) plus telmisartan (12 mg/kg) for seven consecutive days. The heart, liver, spleen, lung, kidney, intestine, and brain tissues were collected at 0, 2, 4, 6, 8, 10, and 24 hours (three replicates at each time point). All tissues were washed with saline, dried using filter paper, and stored at −80 °C.

A liquid-liquid extraction (LLE) procedure was performed to extract canagliflozin from plasma and tissue homogenates. Plasma samples (50 µL) were combined with 5 µL of IS and 200 µL of methyl tert-butyl ether, vortexed for 1 minute and centrifuged for 10 minutes at 12,000 rpm. The supernatant was transferred to a new centrifuge tube, and evaporated till dry under a stream of nitrogen. The residue was reconstituted in the initial mobile phase, centrifuged for 2 minutes at 12,000 rpm, and 50 µL of the solution was transferred into sample vials.

Tissue samples weighing 100 mg (except for the spleen, which in total weighed less than 100 mg) were homogenized with saline (1:2 w/v for the spleen, and 1:1 w/v for all other tissues) for 1 minute. The supernatant was transferred to a new centrifuge tube and processed as described above for the plasma samples.

Selectivity was evaluated by comparing the chromatograms of six different batches of blank samples with the corresponding spiked biological samples. The signal-to-noise (S/N) ratios of the LLOQ should be no less than 10:1. Biological samples were quantified using the peak area ratios of canagliflozin to IS. A standard curve in the form of y= ax+ b was used, where x represents canagliflozin concentration in the sample and y represents the ratio of canagliflozin peak area to that of IS. A linear least square regression analysis was performed to determine the slopes, intercepts, and coefficients (r2), and demonstrate the linearity of this method. The calibration curves were analyzed on three consecutive days.

Quantitative assessment of the matrix effect was performed by post extraction spiking. The peak area (A) of the standard analyte in spiked blank plasma/liver homogenates was compared with the corresponding peak area (B) obtained by adding the standard analyte in the initial mobile phase at concentrations of 10, 800, and 2,400 ng/mL for canagliflozin in six replicates. The peak area ratio of A/B was shown as a quantitative measure of the matrix effect. Extraction recoveries were calculated by comparing the mean peak area of spiked plasma/liver homogenates to those of analytes in the matrix by spiking extracted analyte-free plasma/liver homogenates prior to chromatography in six replicates of three levels of QC samples. The matrix effect and extraction recovery of the IS were calculated using a single concentration (200 ng/mL) and the same procedure as that for canagliflozin.

The stability of plasma/liver homogenates under different storage conditions was evaluated at the levels of LQC, MQC, and HQC samples (n=6). Short-term stability was determined in an autosampler at 4 °C for 24 hours and at room temperature (25 °C) for 24 hours. Long-term stability was determined in the samples after storage at −80 °C for 30 days. The QC samples at −80 °C were kept at room temperature, and repeatedly thawed in three cycles to determine the freeze-thaw stability of the analytes. 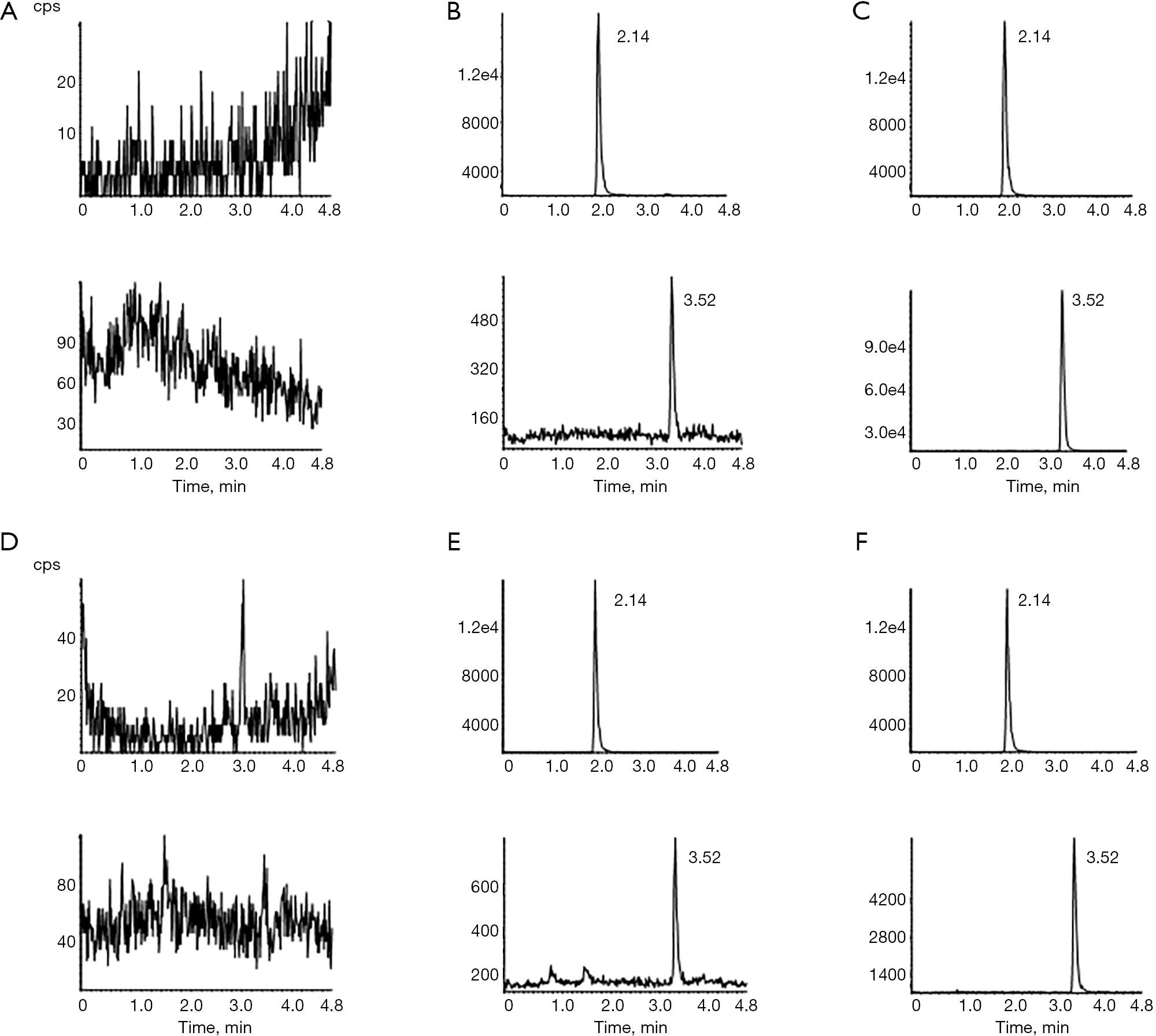 The results for the matrix effect and extraction recovery values in plasma and liver homogenates are shown in Table 3. The matrix effect varied from 90.18% to 98.64%, indicating that there were no endogenous substances or any interference with canagliflozin determination in plasma and liver homogenates. The extraction recovery in different matrices ranged from 91.73% to 107.61%. 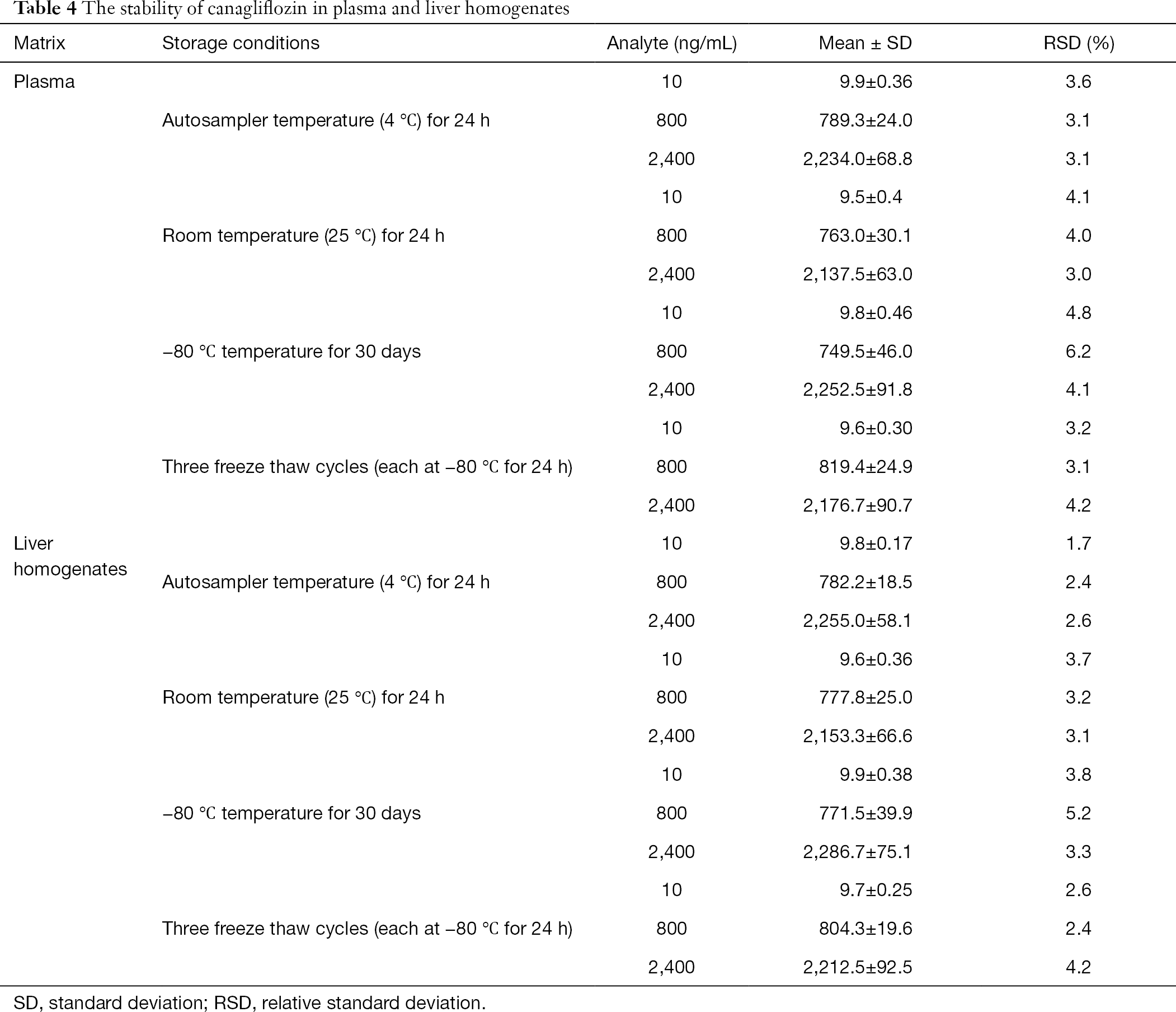 The validated method was successfully applied to examine the concentration of canagliflozin in rat plasma after administration by oral gavage. The mean plasma concentration-time curves of canagliflozin after single- and seven-day administration are shown in Figure 2. The primary pharmacokinetic parameters were determined with the DAS 2.1.1 software using the non-compartmental model and the results are listed in Table 5.

Figure 2 The mean plasma concentration-time curves for canagliflozin with or without telmisartan. (A) After single-day administration; (B) after seven-day administration. Data are expressed as mean ± standard deviation, n=6. 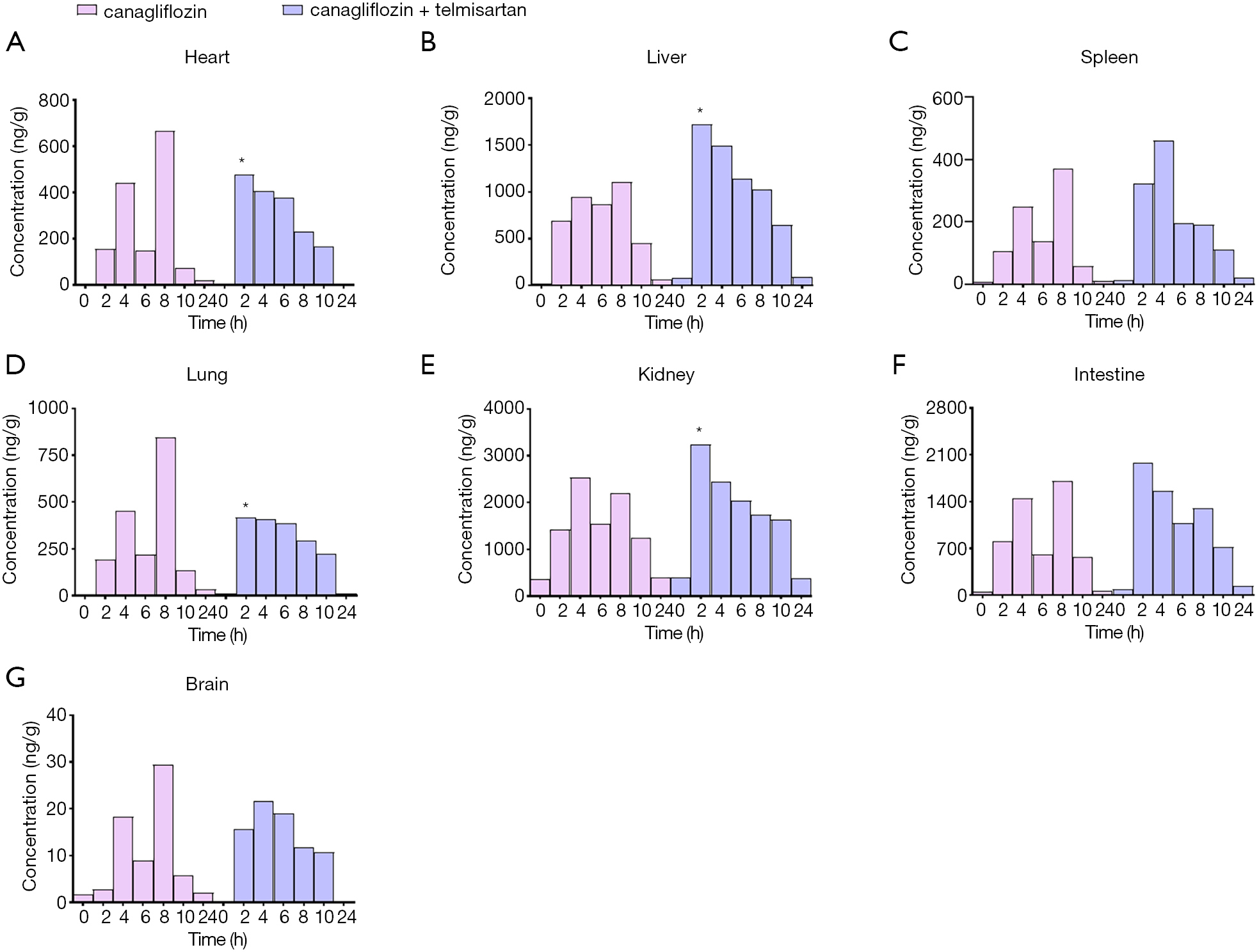 The UPLC-MS/MS method was successfully applied to study the influence of telmisartan on the pharmacokinetics and tissue distribution of canagliflozin. This LLE approach was used to process the biological samples due to its higher extraction recovery compared to that of previous LLE approaches and protein precipitation methods (18-20). Different LLE solvents, including ethyl acetate, dichloromethane, and methyl tert-butyl ether, were explored. Finally, methyl tert-butyl ether was chosen as the solvent as it provided higher extraction recovery and was only required in low volumes (20-22).

For the tissue distribution studies, in accordance with the USFDA guidelines, at least three time points were examined to determine the drug distribution in the absorption phase, equilibrium phase, and elimination phase. Similar to the previous rat plasma concentration-time curves in the pharmacokinetic studies, mice were sacrificed at 0, 2, 4, 6, 8, 10, and 24 hours after the seven-day administration of canagliflozin.

The concentrations of canagliflozin in the heart, liver, lung, and kidney tissues at 2 hours in the combined treatment group were significantly higher than that in the group treated with canagliflozin alone. The concentrations of canagliflozin in all the collected tissues at the elimination phase in the combined treatment group were slightly higher compared to animals treated with canagliflozin alone, and no significant adverse effect was observed. While ABC transporters have been shown to play an important role in the pharmacokinetics of drugs in vitro, its impact in vivo is yet to be explored. There is clear evidence that in vivo telmisartan is a substrate and potent inhibitor of P-gp/ABCB1, and a moderate inhibitor of MRP2/ABCC2 and BCRP/ABCG2. Similarly, in vitro data indicated that canagliflozin is also a substrate of all three efflux transporters. It is possible that telmisartan, being a drug of long-term use, may alter the expression of these efflux transports, and thereby influence the pharmacokinetics of canagliflozin in vivo. However, the detailed mechanisms are yet to be fully elucidated.

Reporting Checklist: The authors have completed the ARRIVE reporting checklist. Available at http://dx.doi.org/10.21037/apm-21-65

Conflicts of Interest: All authors have completed the ICMJE uniform disclosure form (available at http://dx.doi.org/10.21037/apm-21-65). The authors have no conflicts of interest to declare.

Ethical Statement: The authors are accountable for all aspects of the work in ensuring that questions related to the accuracy or integrity of any part of the work are appropriately investigated and resolved. This study was approved by the Hebei General Hospital Ethics Committee. (No.202103). All processes were performed according to the Guidelines for the Care and Use of Laboratory Animals of the Japanese Pharmacological Society.