A 53-year-old woman with a history of end stage renal disease (ESRD) secondary to glomerulonephritis had multiple failed arteriovenous and CUFF catheter dialysis accesses. Her case was also complicated by the presence of chronic edema in the face and left arm, varicose veins, and multiple central venous occlusions (Figure 1A). She had twice undergone surgery that placed an arteriovenous fistula (AVF) on her left arm, had a CUFF catheter in the right jugular vein for 5 years and in the right femoral vein for 4 years, and had an artificial vascular graft (AVG) in the left femoral vein for 2 years. A temporary catheter in the right femoral vein had been placed for the previous 3 months because of dysfunction of the AVG. CT scan and angiography confirmed narrowing and occlusion of multiple veins, especially the right innominate, superior and inferior vena cava, left jugular, and bilateral common iliac veins (Figure 1B,C,D,E). 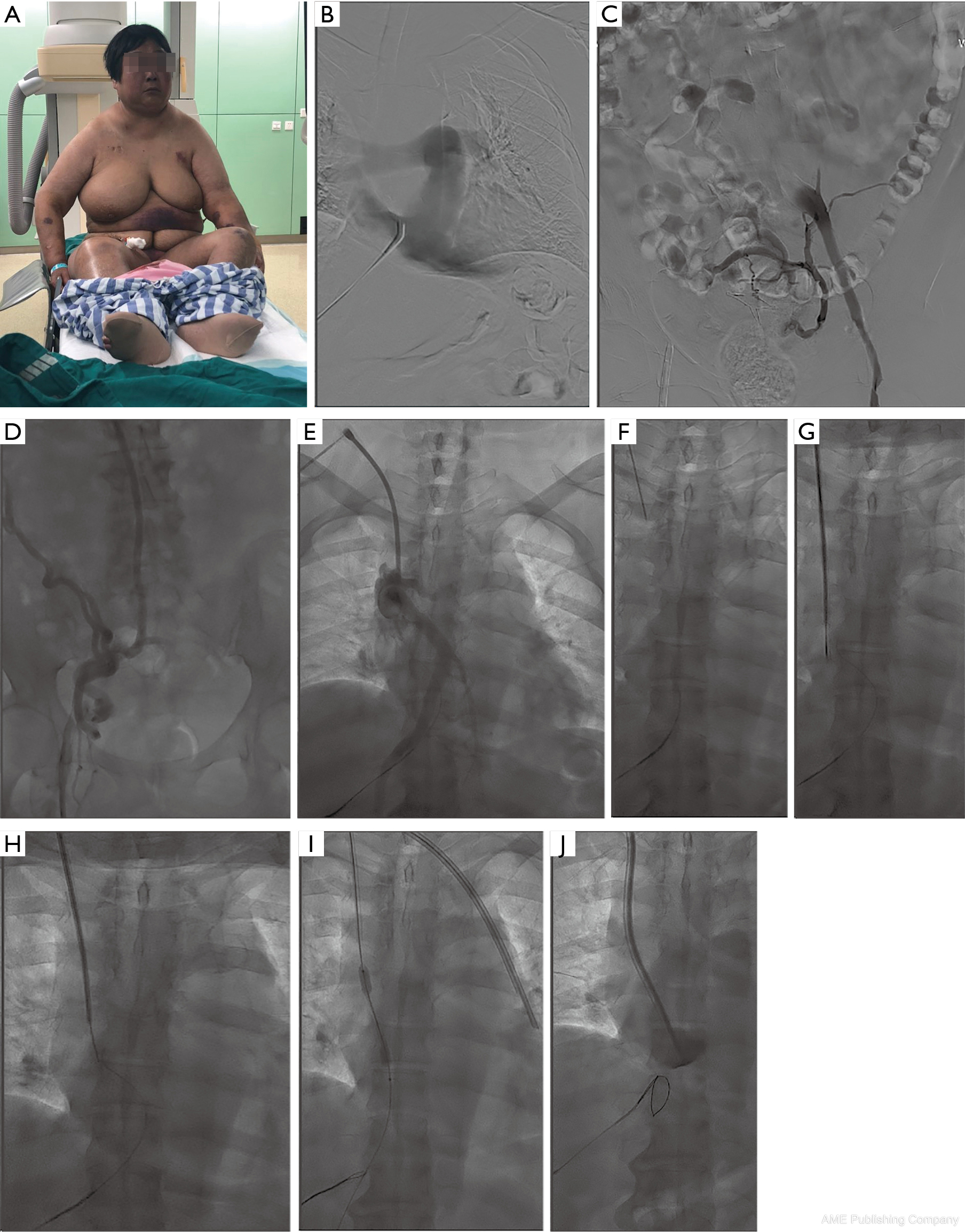 Figure 1 The patient at prior to the procedure and anteroposterior fluoroscopic images during the procedure. (A) Chronic edema is seen in the face, arms and legs, and varicose veins on the arm, thoracic and abdominal wall; (B,C,D,E) computed tomographic scan and angiography confirmed narrowing and occlusion of the superior and inferior vena cava, right innominate, left jugular, and bilateral common iliac veins; (F) percutaneous direct puncture of the superior vena cava was applied; (G) a failed first attempt at reopening with RUPS 100; (H,I,J) a successful secondary attempt with RUPS 100 and balloon.

The first attempt at recanalization of the AVG failed due to severe occlusion of the inferior vena cava and bilateral common iliac vein, despite the use of balloon-expanding and stent placement. A second attempt took place 1 day later using percutaneous direct puncture of the superior vena cava guided by a double C arm angiographic device (Figure 1F). Prior to this, single bend and vascular snare as orientations were placed in the right atrium via hepatic vein percutaneous direct puncture. The initial attempt at recanalization of long-segment complete occlusion of the superior vena cava failed with RUPS 100 and was complicated by pericardial tamponade (Figure 1G). However, after 30 minutes of observation, a secondary recanalization with RUPS 100 and balloon succeeded (Figure 1H,I,J). The catheter was placed without hindrance and edema or varicose veins and its patency has remained for over 18 months following the intervention.

All procedures performed in studies involving human participants were in accordance with the ethical standards of the institutional and/or national research committee(s) and with the Helsinki Declaration (as revised in 2013). Written informed consent was obtained from the patient’s guardian for publication of this study and any accompanying images.

Occlusions of the inferior vena cava and superior vena cava/right atrium junction meant that in this case, puncture and catheterization was not desirable via the hepatic vein or inferior vena cava. As a life saving measure, orientation of the right atrium via the hepatic vein and sharp recanalization of the superior vena cava were attempted as a novel approach. Factors for procedural success included: position, length of vein, collusion, elastic recoiling, and method of recanalization (3-5). The placement of catheters in the right jugular and femoral veins, together with the high blood flow of the AVG, were the main causes for occlusion as well as superior and inferior vena cava syndromes and represented a serious challenge to establishing vascular access. Fortunately, a 6 cm segment of vein remained available between the right femoral and right external iliac veins, which made a temporary catheter for briefly providing blood flow of 150 mL/min and allowed daily hemodialysis prior to the operation.

The consulting nephrologist cautioned that the femoral vein was used more than the right jugular vein, and that the catheter should be transferred to the AVF as soon as possible. AVF first and AVF prepared in advance were recommended methods to prevent superior and inferior vena cava syndromes and CT angiography should be applied before AVG implantation to verify there was no stenosis of the central venous.

Recently, using different methods and tools to cross the chronically occluded segments have been called sharp recanalization. The most common method for sharp recanalization uses a stiff guide wire, PTCD puncture needle, and RUPS100 and transseptal needle (1,7). Common complications in this type of surgical procedure include pain, bleeding associated with vein varicosities caused by compensatory changes in the operation area, infection, and damage to nearby tissue and organs (8). More severe complications include malignant arrhythmia, hydrothorax, hydropericardium, and especially pericardial tamponade, for which there is no efficient hemostasis method, posing a serious threat to life.

Although the patient suffered pericardial tamponade during the procedure, after 30 minutes of non-active bleeding of pericardium, a second attempt resulted in success, with the catheter being placed with its tip to the right atrium and with good blood flow. It is advisable to adopt the technique combining RUPS-100 and hepatic vein direct puncture in a life-threatening situation.

Although superior and inferior vena cava syndromes are not rare in hemodialysis patients, they are often neglected. Sharp recanalization with RUPS100 may be a successful method for relieving long-segment occlusion of the superior vena cava. While pericardial tamponade is a possible complication, in the absence of an active bleed, a second attempt might be considered.

Reporting Checklist: The authors have completed the CARE reporting checklist. Available at http://dx.doi.org/10.21037/apm-21-189

Conflicts of Interest: All authors have completed the ICMJE uniform disclosure form (available at http://dx.doi.org/10.21037/apm-21-189). The authors have no conflicts of interest to declare.

Ethical Statement: The authors are accountable for all aspects of the work in ensuring that questions related to the accuracy or integrity of any part of the work are appropriately investigated and resolved. All procedures performed in studies involving human participants were in accordance with the ethical standards of the institutional and/or national research committee(s) and with the Helsinki Declaration (as revised in 2013). Written informed consent was obtained from the patient’s guardian for publication of this study and any accompanying images.