Polycystic ovary syndrome (PCOS) is a common reproductive endocrine metabolic disease, which is characterized by high androgen, menstrual dysfunction, and polycystic ovarian changes. The etiology of PCOS is multifactorial and has not yet been clarified. Studies have shown that familial and genetic factors may contribute to the predisposition of PCOS (1,2). Insulin resistance plays an important role in the development of PCOS, but its mechanism remains to be further elucidated (3-5). Although there are different opinions on the diagnosis of PCOS, high androgen and sparse ovulation or no polycystic ovarian changes are regarded as the important diagnostic basis. PCOS is associated with multiple metabolic abnormalities, including insulin resistance, type 2 diabetes mellitus (T2DM), obesity, and dyslipidemia. Myonectin, a newly discovered actin, belongs to the C1q/TNF-related protein (CTRP) family, also known as CTRP15. Myonectin is secreted by skeletal muscle and participates in glucose and lipid metabolism. Studies have shown that recombinant myonectin can promote the uptake of fatty acids in mice, thereby reducing the level of serum-free fatty acids (6). When fed with a high-fat diet (HFD), mice with myonectin deficiency can store more fat, and the degree of liver steatosis is lower, accompanied by increased insulin resistance and triglyceride (TG) levels (7). In addition, after oral administration of liposomes, the lipid clearance of myonectin-deficient mice was impaired (7). Two preclinical studies that concentrated on the relationship between myonectin and metabolic diseases showed that no increase or decrease of circulating myonectin was detected in subjects with T2DM, and the level of myonectin in obese people was lower than that in lean people (8,9). The above results indicate that myocintin is associated with a variety of endocrine and metabolic diseases, but whether it plays a role in the pathogenesis of PCOS is unknown (9). Therefore, we studied the correlation between myoctin level and the clinical characteristics of PCOS to explore its possible role in the pathogenesis of PCOS, and to provide a theoretical basis for looking for a new treatment method.

We present the following article in accordance with the STROBE reporting checklist (available at http://dx.doi.org/10.21037/apm-21-458).

One hundred PCOS patients who sought medical advice from September 2017 to March 2019 in our hospital were selected as the PCOS group and had a mean age of 27.83 years (±5.62). One hundred healthy women matched with the PCOS patients’ age and body mass index (BMI) were selected as the control group and had a mean age of 28.14 years (±4.57). The inclusion criteria were as follows: (I) a clinical diagnosis consistent with PCOS; (II) no treatment that would affect glucose metabolism, lipid metabolism, or sex hormones; (III) no recent surgery or acute infection; (IV) onset of menarche more than 3 years and less than 36 years before enrolment in the study; (V) no history of pregnancy or abortion within 3 months. Exclusion criteria were as follows: (I) PCOS combined with Cushing’s syndrome, congenital adrenal hyperplasia or other adrenal diseases, thyroid dysfunction or other diseases causing menstrual cycle disorders or androgen excess; (II) PCOS accompanied by abnormal liver and kidney function: (III) PCOS associated with ovarian cyst or tumor. All participants in the study signed informed consent. This study was approved by the Ethics Committee of Wenzhou Hospital of Traditional Chinese Medicine Affiliated to Zhejiang Chinese Medical University (No. WZY2016-027). The study was conducted in accordance with the Declaration of Helsinki (as revised in 2013).

SPSS 21.0 software (SPSS, lnc., Chicago, IL, USA) was used to analyze the data, and results were expressed as mean ± standard deviation (SD). Data consistent with normal distribution were compared by independent sample t-tests. Pearson correlation analysis was used for the correlation analysis among all indices. P<0.05 was considered statistically significant.

Compared with the control group, the luteinizing hormone (LH) level of the PCOS group was significantly higher, and the SHBG level was significantly lower (P<0.05). There was no significant difference in follicle-stimulating hormone (FSH), estradiol (E2), testosterone, or progesterone between the two groups (P>0.05) (Table 3). 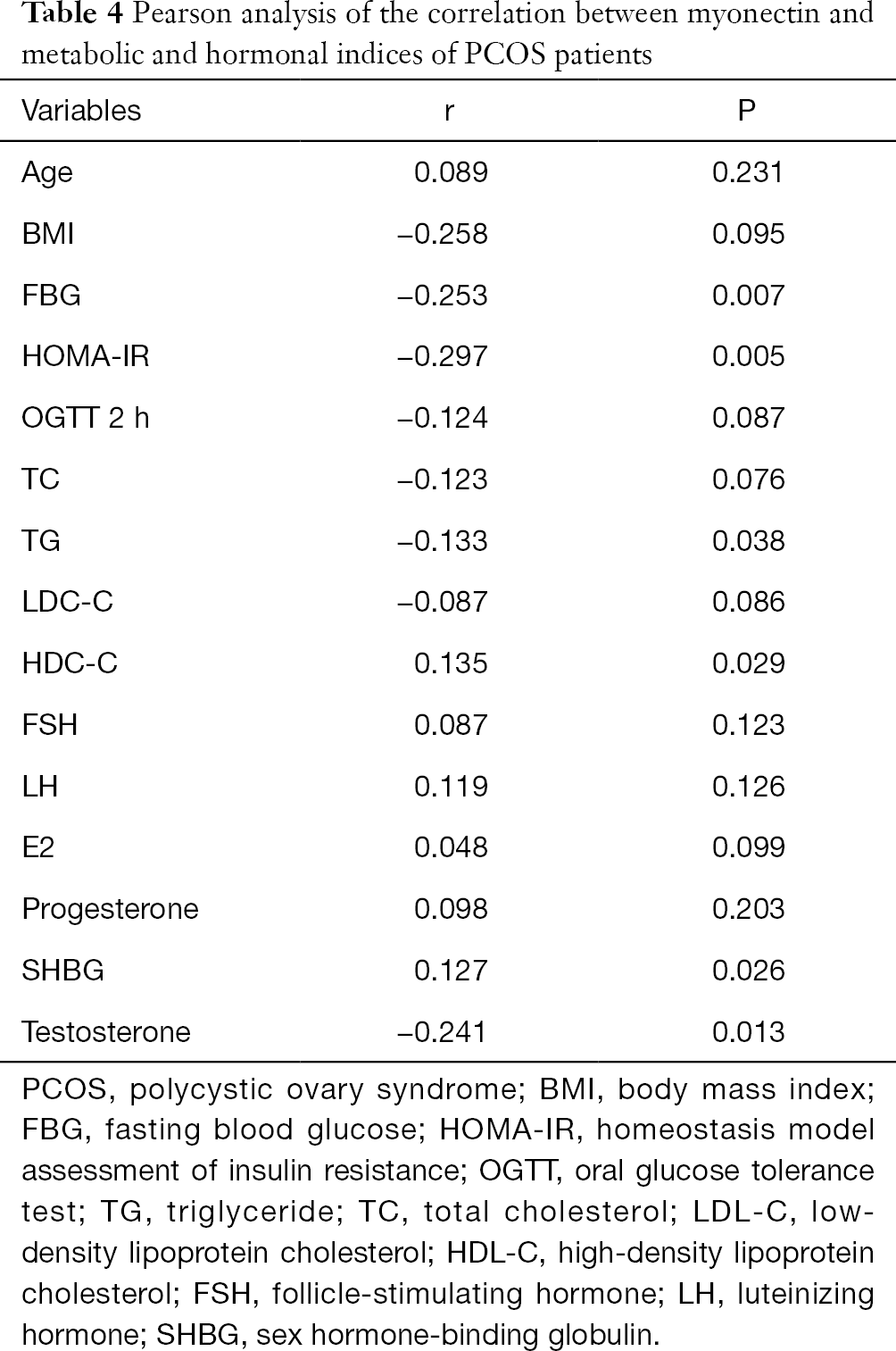 PCOS is the most common endocrine disease in women of childbearing age in China. It is a group of clinical syndromes characterized by dysgenesis, endocrine abnormalities, metabolic disorders, and mental health problems (10). PCOS not only affects the fertility of patients but can also affect their pregnancy and long-term health. Therefore, it is crucial to clarify the pathogenesis and identify the early metabolic and hormonal disorders associated with PCOS to improve patients’ long-term quality of life. Cytokines and growth factors (muscle factors) secreted by skeletal muscle cells can participate in the metabolic regulation process through autocrine, paracrine, and endocrine effects (11,12). Myonectin is a new muscle factor discovered in recent years, which plays an important role in regulating glucose and lipid metabolism (6). However, there are few studies on the effect of myonectin in the metabolic and hormone disorders of PCOS. In this article, we compared the levels of myonectin between PCOS women and healthy women and the general clinical information, metabolism, and sex hormone-related indicators of the two groups of patients, and analyzed the correlation between myonectin, metabolism, and hormones.

There are differences in the results of many studies on myonectin, which may be due to the heterogeneity of the study populations. PCOS subjects usually have lipid metabolism disorder, accompanied by lower HDL-C levels and higher TG levels. We found that circulating HDL-C levels were decreased in the PCOS patients, while TG levels were consistently higher than in the control group. Our study showed that the level of myonectin was negatively correlated with TG and positively correlated with HDL-C. Therefore, the decrease in myonectin levels may be an important cause of lipid metabolism disorder in PCOS patients.

Our research also has some limitations. In this study, we used the HOMA-IR index instead of the hyperinsulinemic-euglycemic clamp technique to evaluate the level of insulin resistance. Although this cross-sectional design study cannot confirm the causal relationship between molecules and diseases, it assists in determining the correlation between them. In conclusion, low levels of myonectin are associated with hormone and metabolic abnormalities in PCOS patients. Myonectin may increase the risk of PCOS by participating in the pathophysiological process of PCOS.

Based on the current research progress of intestinal flora and glucose and lipid metabolism, it can be inferred that metabolic abnormality is the key factor in the occurrence of PCOS, and genetic polymorphism of specific population leads to its susceptibility to metabolic changes. This type of PCOS is known as metabolic associated polycystic ovary syndrome (MAPS). Combined with our study, the dysregulation of myocinetin expression may play an important role in the pathogenesis of MAPS. The proposal of MAPS is conducive to changing the current clinical practice and clinical research thinking with anti-androgen as the main strategy, emphasizing more on etiological treatment. Therefore, myocinetin may be a potential therapeutic target for MAPS.

Reporting Checklist: The authors have completed the STROBE reporting checklist. Available at http://dx.doi.org/10.21037/apm-21-458

Conflicts of Interest: All authors have completed the ICMJE uniform disclosure form (available at http://dx.doi.org/10.21037/apm-21-458). The authors have no conflicts of interest to declare.

Ethical Statement: The authors are accountable for all aspects of the work in ensuring that questions related to the accuracy or integrity of any part of the work are appropriately investigated and resolved. This study was approved by the Ethics Committee of Wenzhou Hospital of Traditional Chinese Medicine Affiliated to Zhejiang Chinese Medical University (No.WZY2016-027). All participants in the study signed informed consent. The study was conducted in accordance with the Declaration of Helsinki (as revised in 2013).