Intervertebral disc degeneration (IDD) is a chronic progressive disease caused by many factors. Its pathological changes are characterized by the decrease in proliferation activity, the quantity of nucleus pulposus cells, and the decrease in extracellular matrix synthesis (1,2). IDD is one of the main causes of chronic low back pain and the basis of various spinal diseases such as intervertebral disc herniation and spondylolisthesis. It seriously affects patients’ quality of life and labor ability and imposes a great burden on the social economy.

Traditional Chinese medicine believes that improving renal function can effectively delay low back pain caused by IDD. Bushen Huoxue decoction (BHD) was recorded in the Great Achievement of Traumatology, written by Zhao Lian, a physician in the Qing Dynasty. It can effectively improve renal function and promote blood circulation. It is a commonly used prescription in the treatment of degenerative diseases of intervertebral discs in traditional Chinese medicine, with excellent clinical effect (3). Previous studies revealed that BHD could inhibit the adipogenic differentiation of bone marrow mesenchymal stem cells (BMSCs), promote their osteogenic differentiation and migration in vitro, and regulate the expression of IL-1β (4), TGF-β1 (5,6), and p38MAPK proteins (7) in degenerative discs. BHD can also regulate multiple targets and multiple mechanisms. Although we have uncovered part of the mechanism of BHD in the treatment of degenerative disc disease, this is just the tip of the iceberg. More complex regulatory mechanisms need to be explored and reviewed.

Previous studies on the regulation mechanism of BHD on IDD are generally one-sided, lacking macroscopic and overall understanding. Therefore, based on network pharmacology technology, this study explored the corresponding relationship between drug components and disease targets, predicted all possible regulatory mechanisms, and provided a theoretical basis for the follow-up experimental study of BHD in the treatment of IDD. The study flow chart is shown in Figure 1. We present the following article in accordance with the MDAR reporting checklist (available at http://dx.doi.org/10.21037/apm-20-2586). 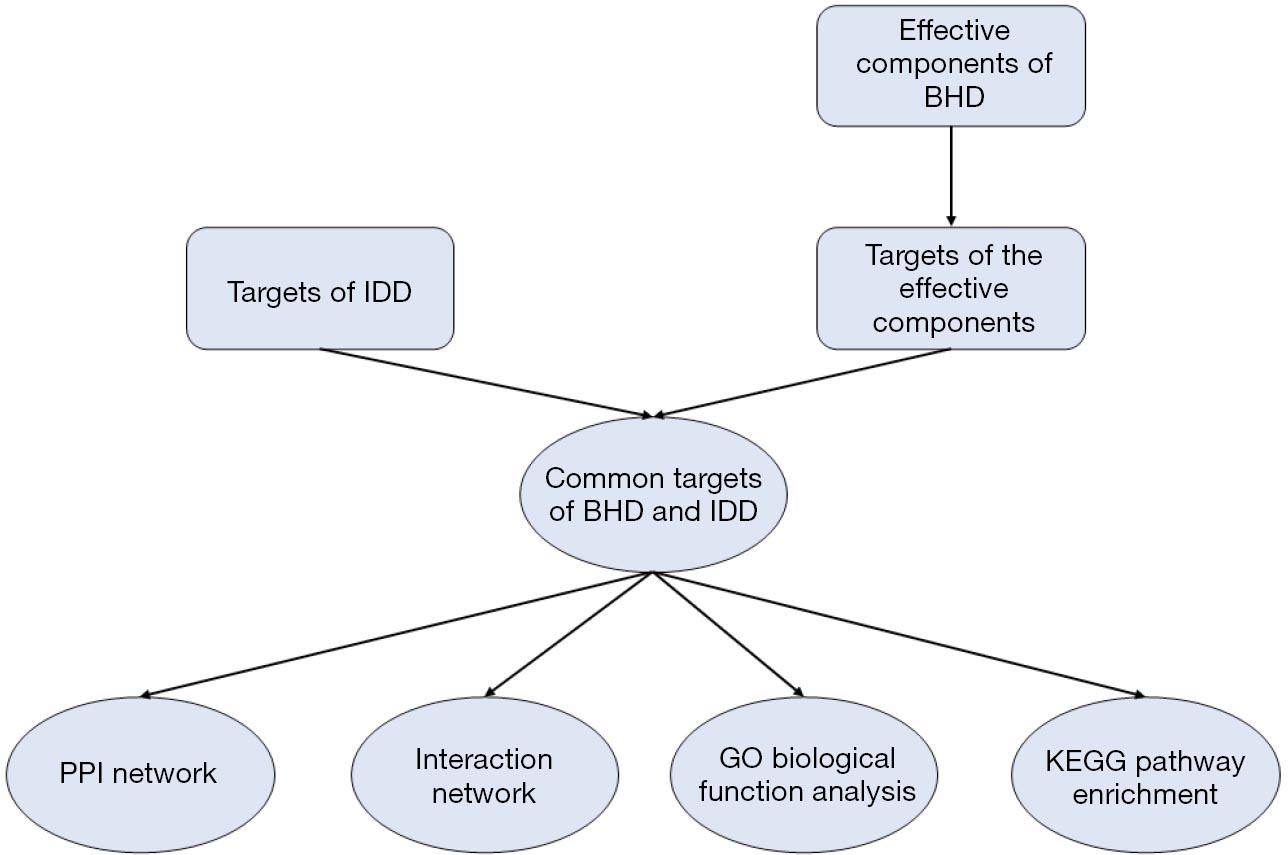 The study was conducted in accordance with the Declaration of Helsinki (as revised in 2013). The study was approved by ethics board of Affiliated Hospital of Hunan Academy of Chinese Medicine (No. LLBH-201910310001) and informed consent was taken from all the patients.

Effective components and the selection of targets of BHD

The TCMSP database (http://lsp.nwu.edu.cn/tcmsp.php) and BATMAN-TCM database (http://bionet.ncpsb.org/batman-tcm/) were used to retrieve all the effective components of the raw materials of BHD: Radix Rehmanniae, Eucommia ulmoides Oliv, Fructus Lycii, Fructus Psoraleae, Dodder, Angelicae Sinensis Radix, myrrh, Fructus corni, safflower, Angelica, and Cistanche deserticola. The preliminarily screened literature was read according to the criteria of oral bioavailability (OB) ≥30% and drug-likeness (DL) ≥0.18. The primarily screened literature was re-screened, thus, obtaining the effective components of BHD. Subsequently, through the TCMSP and BATMAN-TCM database, all the targets of each component of BHD were retrieved. The targets and the effective components of BHD were then inputted into the Perl plug-ins.

The screening of targets for degenerative disc disease

The screening of common targets of active ingredients, disease, and PPI network construction

To clarify the interaction between the related targets of IDD and the potential targets of BHD, the R language (https://www.r-project.org/) software and the Perl language program were used to intersect the disease targets and drug targets. After, the Wayne map was drawn. The STRING (https://string-db.org/) plug-in was used to build a common target protein-protein interaction (PPI) network. The protein type was set to “Homo sapiens”, and other parameters remained as the default settings to obtain the PPI network. The Count. R plug-in was used to obtain the frequency of common protein targets.

In the Bioconductor database (http://www.bioconductor.org/) after the data download, R software was used (https://www.r-project.org/). GO enrichment analysis and KEGG enrichment analysis were carried out automatically for drug and disease interaction targets, and Perl plug-in was used to transform and output the results. GO analysis is mainly used to describe the function of gene products, including cell function, molecular function, and biological function. KEGG analysis mainly describes the location and role of the target in related biological signal pathways.

All the GO and KEGG enrichment analysis results were selected by P<0.05 as the critical criterion, and the first 20 pathways were screened out.

The screening of the active components of BHD

In the present study, the disease targets of IDD were retrieved from the GeneCards and OMIM database. The relevance score of ≥17.0 was used as the inclusion criterion. After eliminating the repeated targets, 630 therapeutic targets of IDD were obtained.

Common target screening and the construction of the PPI network

The R language software and Venny plug-in program were used to screen the common targets from 661 targets of intervertebral disc degenerative disease and 131 active drug components. A Wayne map was drawn (Figure 2). Then, 31 common targets were input in the STRING database (https://string-db.org/), the human genome was chosen, and the PPI network was constructed in the mode of "medium confidence: 0.4" (Figure 3). The Count. R plug-in was used to count the top 30 protein targets. The findings showed that IL6, VEGFA, CASP3, EGFR, ESR1, and MAPK8 appeared more frequently (Figure 4). 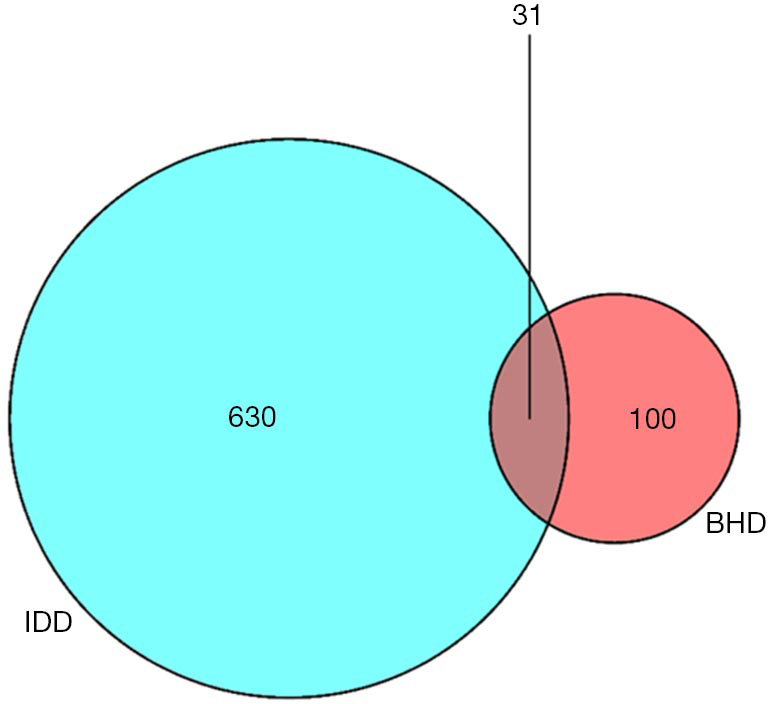 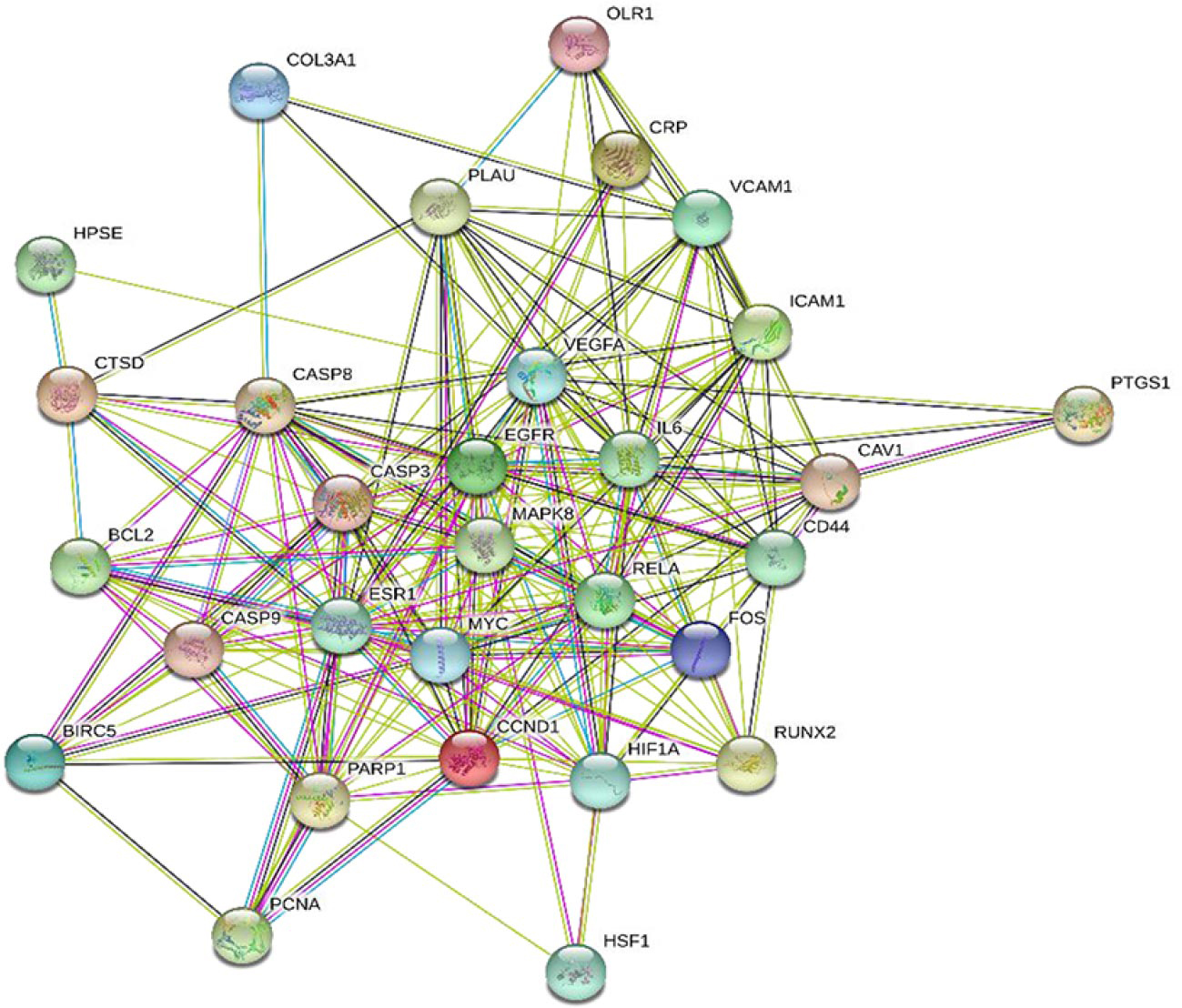 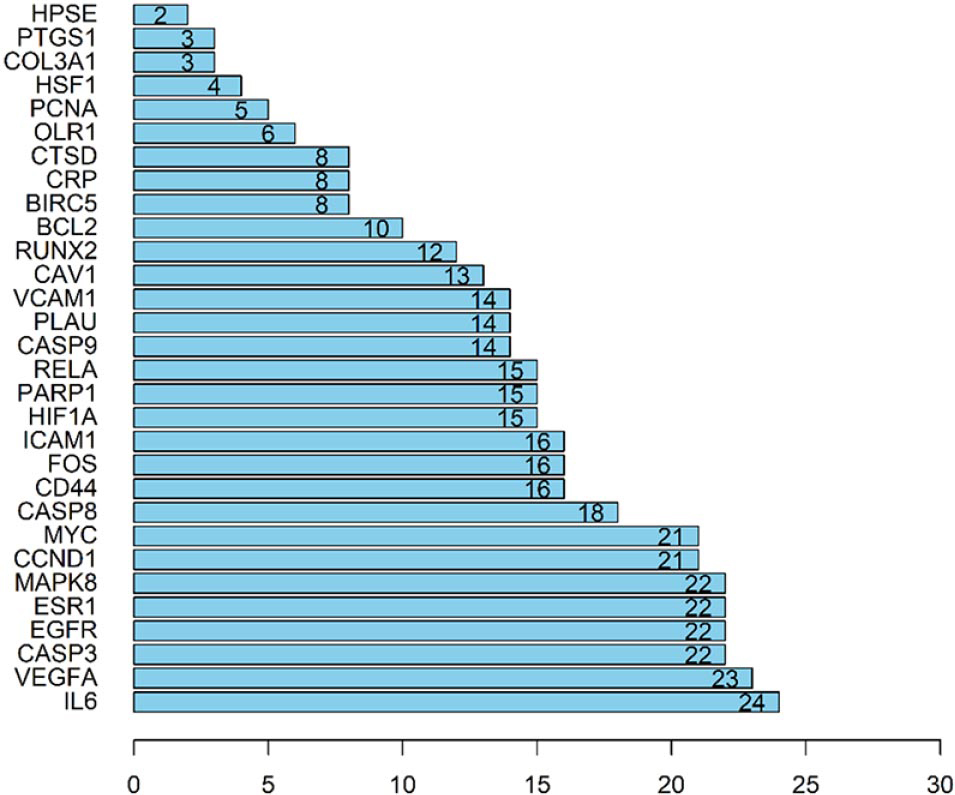 Figure 5 Active constituents-IDD-target interaction network. In the picture, purple is BHD, red is the disease disc degeneration, yellow is the active ingredient of BHD, and green is the common target of BHD and IDD. BHD, bushen huoxue decoction; IDD, intervertebral disc degeneration. 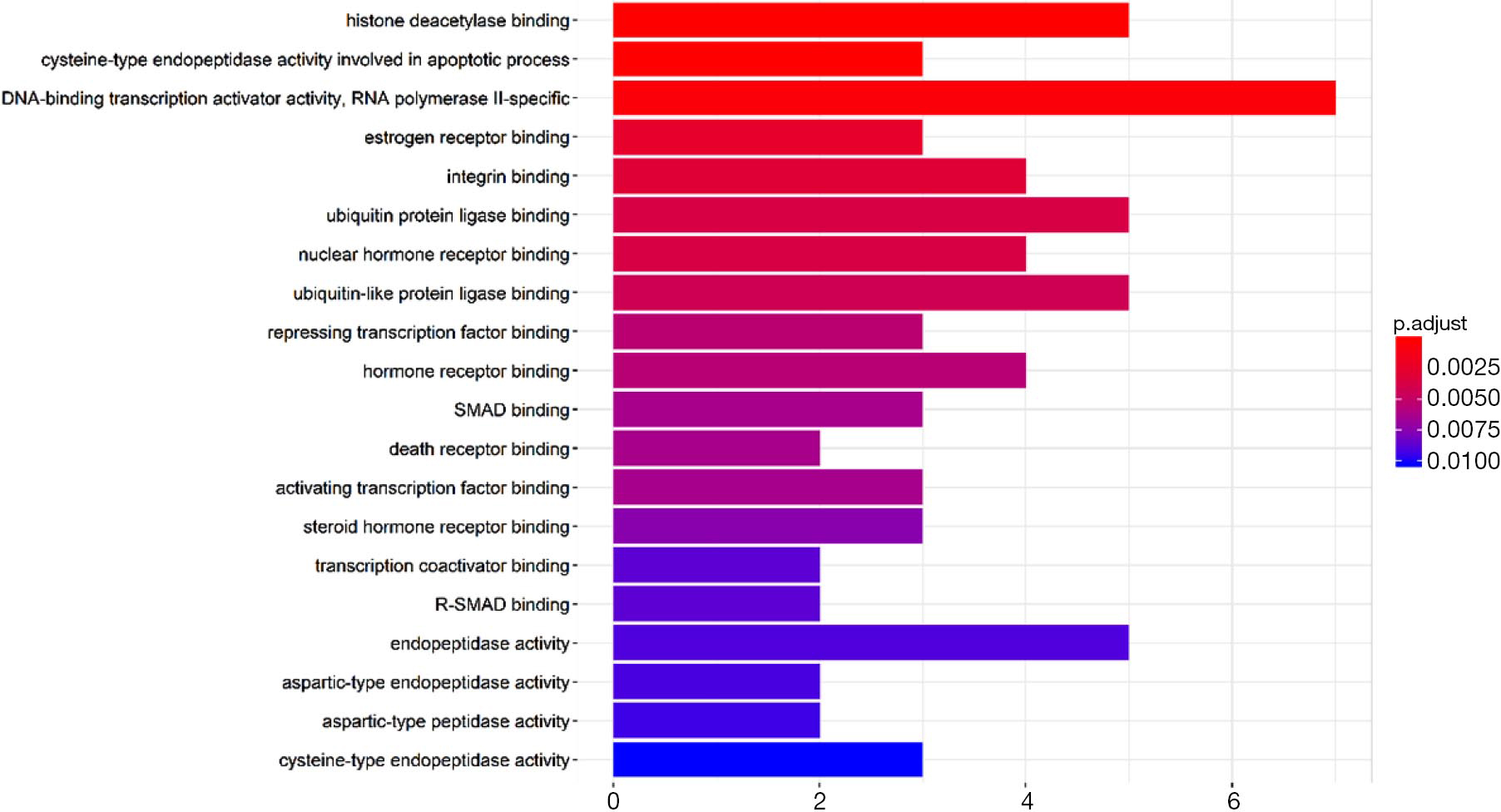 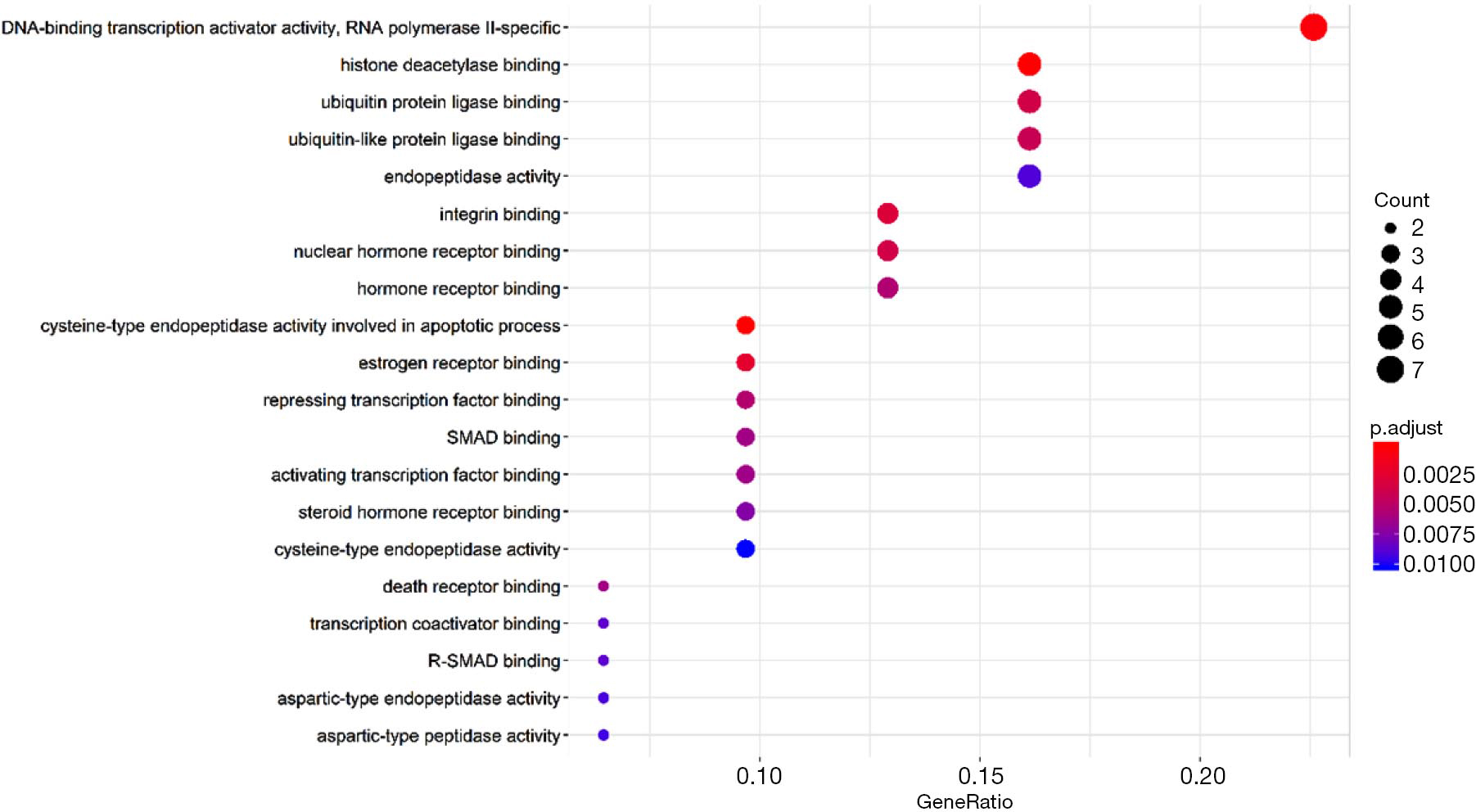 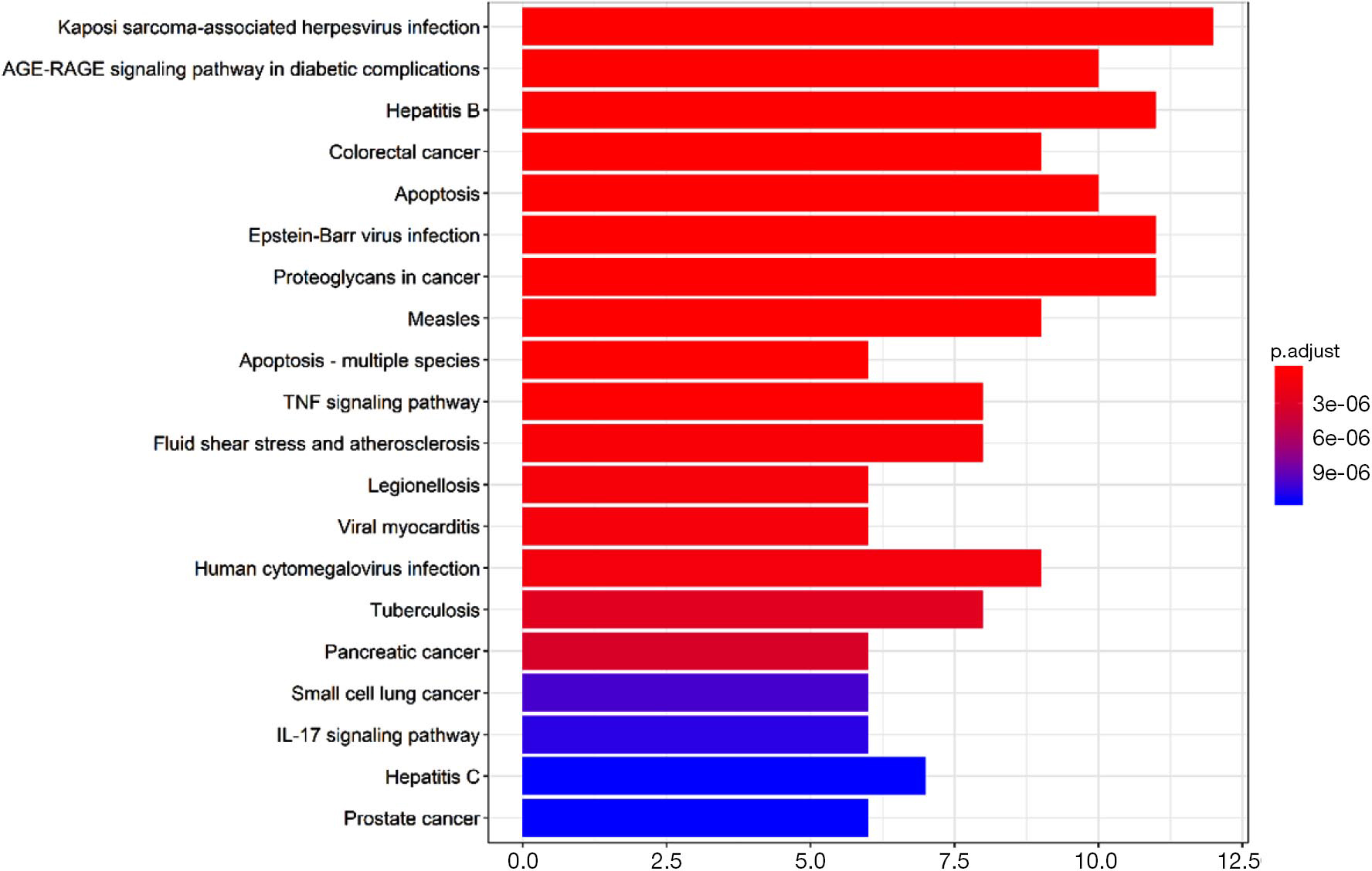 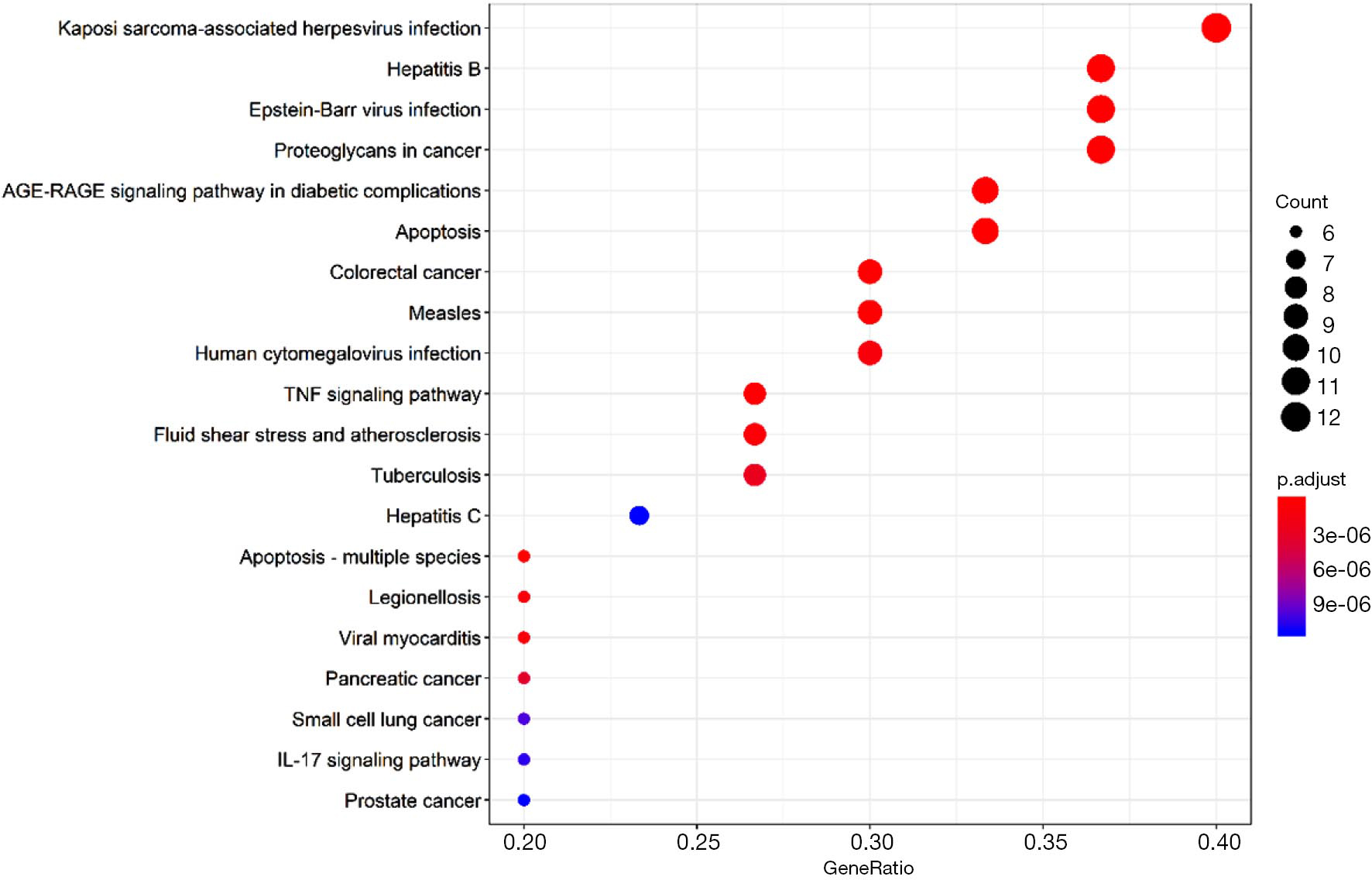 In the present study, 164 effective components and 131 targets of BHD and 626 targets of IDD were screened, and 31 common interaction targets were obtained. IL6, VEGFA, CASP3, EGFR, ESR1, and MAPK8 appeared more frequently, which were mainly enriched in the AGE-RAGE, TNF, PI3K Akt, and MAPK signaling pathways.

The specific mechanism of IDD remains unknown. The biological characteristics of its degeneration are tissue fibrosis caused by the progressive decrease of proteoglycan, dehydration of type II collagen, and an increase in type I collagen (8-10). During the process, interleukin-1 (IL-1), tumor necrosis factor α (TNF-α), and other pro-inflammatory factors affect the balance of the extracellular matrix by stimulating the production of NO, matrix metalloproteinase, and proteoglycans while resulting in the degradation of the extracellular matrix and the degeneration of the pulpiform nucleus and fibrous rings (11-13). At present, research in traditional Chinese medicine puts the intervertebral disc into the category of muscles and bones, which is closely related to the liver and kidneys. BHD is from “The Great Achievement of Traumatology”, written by Lian Zhao in the Qing Dynasty. During the decoction intervention, prepared Rehmannia and Eucommia are considered as sovereign medicine. These tonify the liver and kidneys and strengthen the muscles and bones. Cornus Officinalis, wolfberry, Cistanche deserticola, Psoralea, and Cuscuta are ministerial drugs that warm Yang and tonify the kidneys. Angelicae Sinensis Radix, myrrh, and safflower are conducting drugs that clear the channels and remove blood stasis. Angelica eliminates wind and dampness, disperses arthralgia, and relieves pain. The decoction tonifies the liver and kidneys, removes rheumatism, strengthens the body’s resistance, eliminates pathogens, clears channels, and removes blood stasis. Drugs are used according to these symptoms, while both the symptoms and the roots are simultaneously considered. Satisfactory effects have been obtained in the clinical application of the decoction intervention. The investigators’ previous study revealed that BHD could reduce the expression of various pro-inflammatory factors and key protein molecules in the degenerative intervertebral disc of rats while simultaneously controlling the degeneration of the intervertebral disc.

In the present study, TCMSP, BATMAN-TCM, GeneCards, STRING, and other biological information databases were used preliminarily to explore the mechanism of BHD-regulating IDD. The study screened 131 interaction targets of the effective components of BHD, and 31 were targeted at degenerative disc disease. Of these 31 targets, IL6, VEGFA, and CASP3 appeared most frequently. IL6 is confirmed to be involved in the degradation of the extracellular matrix in IDD (14). It is one of the most studied cytokines in the study of IDD. VEGFA may be co-expressed with the p53 gene in degenerative disc tissue and co-acts in neovascularization and infiltration to accelerate the degeneration of intervertebral disc tissues (15). CASP3 is mainly involved in the initiation of apoptosis in the process of IDD (16).

From the interaction network diagram of the active component-intervertebral disc degeneration-target, 77 nodes and 384 edges were obtained. These reflected the complex network characteristics of multiple targets and multiple mechanisms of BHD in the intervention of IDD. The results of the GO enrichment analysis of the molecular function of the common targets of BHD and IDD also revealed that these top-ranked components were mainly molecules with the function of protein binding. The enrichment analysis of the KEGG biological pathway revealed that the signal pathways with the most target enrichment of BHD intervention on IDD were the AGE-RAGE signaling pathway, TNF signaling pathway, PI3K Akt signaling pathway, and MAPK signaling pathway. The TNF and MAPK signaling pathways often play an important role in the process of IDD by promoting the secretion of inflammatory factors, the apoptosis of pulpiform nucleus cells, and the degradation of the extracellular matrix through synergic effects (17-19). The PI3K Akt signaling pathway can delay the degeneration of the intervertebral disc by regulating the expression of MMP-3 (20) while inhibiting the apoptosis of pulpiform nucleus cells (21). The results from domestic and foreign literature revealed that there are fewer studies on the correlation between the AGE-RAGE signaling pathway and IDD. Xunlu et al. (21,22) revealed, through integrating biological information, that the AGE-RAGE signaling pathway may play an important role in the process of IDD. This suggests the next direction of study on the mechanism of the development of IDD.

In summary, BHD intervenes in 31 targets in the process of IDD through 164 active ingredients and regulates various molecular functions and signal pathways through these targets while accordingly delaying the degeneration of the intervertebral disc. These findings provide a theoretical basis for further experimental studies on BHD in treating degenerative disc disease. The results of the KEGG enrichment analysis also revealed that the intervention targets of BHD on IDD frequently appeared in Kaposi’s sarcoma-related herpes virus infection, hepatitis B, Epstein-Barr virus infection, and tumor proteoglycan. Whether the active components in BHD can regulate these pathological processes needs further study.

However, the regulatory targets and mechanisms of BHD on IDD summarized in this study are based on the current bioinformatics database, and the research on the pathogenesis of IDD lacks innovative findings. In addition, this study is based on the database information analysis and prediction of BHD intervention mechanisms related to IDD, which belongs to theoretical research. Further experiments are needed to verify these theoretical results.

This study screened the effective components, targets, and mechanisms of BHD in treating IDD using the network pharmacological technology while providing a theoretical basis for further experimental studies on BHD in treating degenerative disc disease.

Funding: This study was supported by Key Project of Hunan Traditional Chinese Medicine Research (No. 201902).

Reporting Checklist: The authors have completed the MDAR reporting checklist. Available at http://dx.doi.org/10.21037/apm-20-2586

Conflicts of Interest: All authors have completed the ICMJE uniform disclosure form (available at http://dx.doi.org/10.21037/apm-20-2586). The authors have no conflicts of interest to declare.

Ethical Statement: The authors are accountable for all aspects of the work in ensuring that questions related to the accuracy or integrity of any part of the work are appropriately investigated and resolved. The study was conducted in accordance with the Declaration of Helsinki (as revised in 2013). The study was approved by ethics board of Affiliated Hospital of Hunan Academy of Chinese Medicine (No. LLBH-201910310001) and informed consent was taken from all the patients.