Effect of multidisciplinary team care on the management of cirrhotic patients with upper gastrointestinal bleeding: a retrospective cohort study

Cirrhosis is caused by several factors, including hepatitis, excessive alcohol, cholestasis, and the use of certain drugs, of which hepatitis B is the main risk factor in China (1,2). Cirrhosis can lead to portal hypertension, involving increased portal inflow and high portal outflow resistance (3). Portal hypertension can induce several serious complications, such as acute upper gastrointestinal bleeding (UGIB). It was reported that severe UGIB occurred in 10–30% of cirrhotic patients and had a mortality rate of 5–20% each year (4-7). The mortality of UGIB patients is high without appropriate treatment (8). Current first-line treatment for UGIB includes vasoactive drugs and endoscopic procedures to initially control bleeding and prevent early rebleeding. The survival of cirrhotic patients has significantly improved along with the developments in pharmacological treatment strategies. Despite this, the management of cirrhotic patients with UGIB still remains a clinical challenge.

It is known that the management of cirrhotic patients with UGIB is not only dependent on in-hospital care, but also the collaboration of the family. The purpose of in-hospital care is to control bleeding and to take measures to prevent rebleeding, while family care can also enhance measures to prevent rebleeding. In this way, family care may be more important than in-hospital care for improving the health status and quality of life of patients (9). However, the traditional mode of care for cirrhotic patients with UGIB is only dependent on nurses, exhibiting poor accessibility and effectiveness (10).

Recently, multidisciplinary team care (MDTC), a patient-centered medical collaboration, has been proposed to provide specialized and well-rounded care for patients by a group-coordinated symposium including various experts from different disciplines. MDTC is expected to improve the prognosis and quality of life of patients by the collaboration of multiple disciplines. It has been reported to be effective in the management of several types of diseases, such as diabetes mellitus, breast cancer, and ankylosing spondylitis (10-12). However, it is still unclear whether MDTC is effective in the management of cirrhotic patients with UGIB. Therefore, the present retrospective cohort study was conducted to investigate the effects of MDTC on the management of cirrhotic patients with UGIB compared with traditional care.

We present the following article in accordance with the STROBE reporting checklist (available at http://dx.doi.org/10.21037/apm-21-85).

To conduct this retrospective cohort study, we recruited cirrhotic patients with UGIB from Third Affiliated Hospital of Nantong University between July 2015 and December 2019. Patients who were admitted to this hospital between July 2015 and July 2017 received traditional care and those who were admitted between August 2017 and September 2019 received MDTC. UGIB in this study was defined as hematemesis or melena. The age and sex of patients were not limited in this study. Patients were excluded if they died before receiving treatments, had hepatocellular carcinoma or other cancer, had incomplete medical records, or experienced rebleeding within 6 weeks after a previous UGIB. All procedures performed in this study involving human participants were in accordance with the Declaration of Helsinki (as revised in 2013). The study was approved by ethics board of Third Affiliated Hospital of Nantong university (NO. 2019029). Individual consent for this retrospective analysis was waived.

In the traditional care group, patients were admitted to the intensive care unit for close observation and medication treatment after endoscopic procedures, until their condition was stable. Patients then received routine nursing care, such as symptomatic nursing, health education, and psychological counseling. After discharge, patients were followed up once a month for at least 6 months by telephone or internet to learn about their current condition and direct their self-care outside the hospital.

In the MDTC group, a nursing-led multidisciplinary team was set up comprising of 1 digestive disease specialized nurse, 2 digestive disease attending physicians, 1 psychological consultant, a clinical dietitian, some normal nurses, and postgraduate volunteers. Generally, the digestive disease specialized nurse acted as the leader of the team to organize and coordinate the work of team members. The 2 attending physicians were responsible for assessing the condition of patients, analyzing the possibility of future development of UGIB, and providing suggestions for the next step of treatment and nursing care. The psychological consultant was responsible for assessing the current psychological status of patients and providing psychological therapy to improve their psychological status if necessary. The clinical dietitian was responsible for the analysis of the nutritional status of patients and providing suggestions for parenteral nutrition formulations. Nurses in this team were responsible for daily normal nursing care and telephone or online follow-up just as in the traditional care group, and postgraduate volunteers assisted in the collection and analysis of the clinical data. A short symposium was held once per week among the team to exchange experiences and problems, and several senior physicians were invited to evaluate and improve the work of the team.

The primary outcomes in this study were mortality and the incidence of rebleeding of enrolled patients within 1 year. Furthermore, quality of life was chosen as the secondary outcome. Quality of life was assessed according to the EuroQol 5-dimensions 5-levels questionnaire (EQ-5D-5L) within 4 weeks after the patients were discharged. The EQ-5D-5L was designed to assess 5 dimensions, including mobility, self-care, usual activities, pain and discomfort, and anxiety and depression of patients. The response of patients was divided into 5 levels: level 1 represented no problem and level 5 represented extreme problems. All responses were then converted into a score from 0 to 1, 0 representing dead and 1 representing full health, according to a previous study (13).

Categorical values were represented as numbers and proportions, and compared using the chi-square test. Continuous variables were represented as mean and standard deviation, and were compared using the Student’s t-test. Multivariable logistic regression was used to analyze the risk factors of mortality and rebleeding after adjusting for variables showing significant differences in the univariable logistic regression analysis. Similarly, multivariable linear regression was used to determine the effects of MDTC on the quality of life of enrolled patients. All analyses were performed using SPSS 22.0 software. 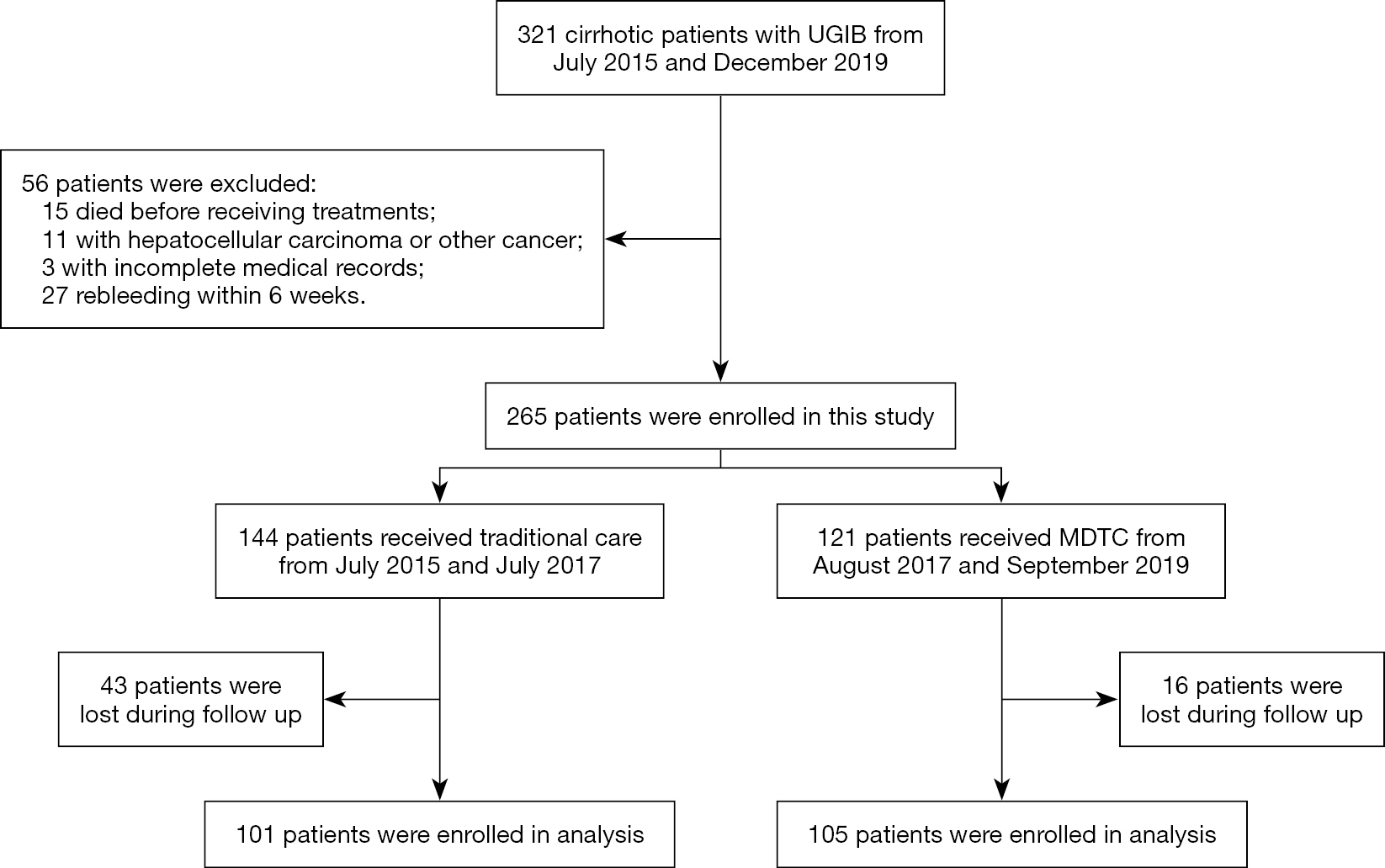 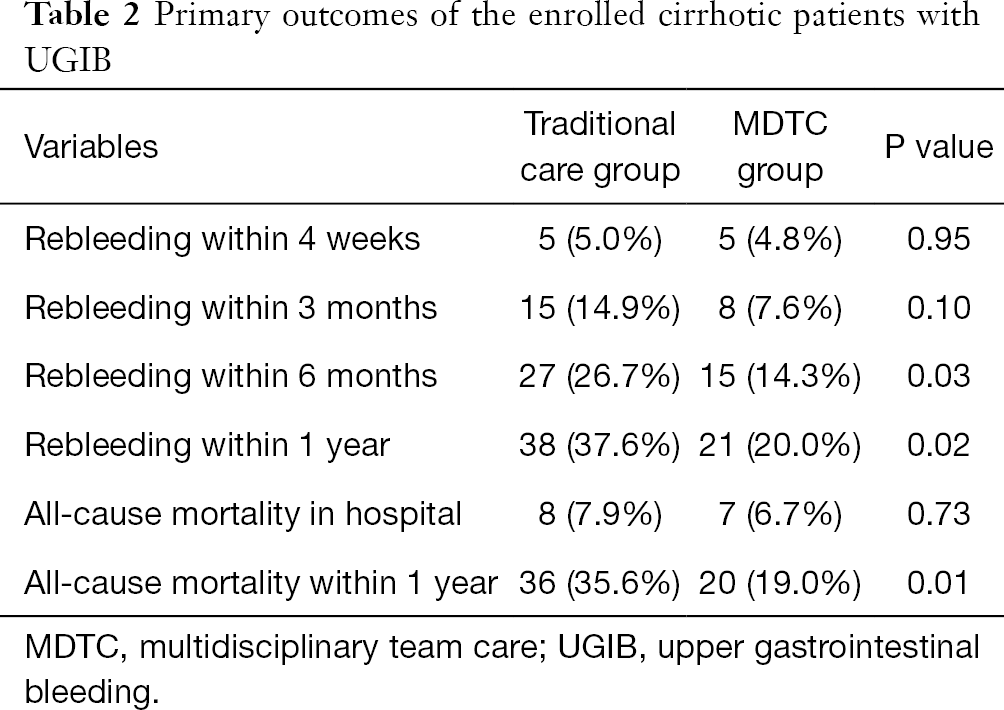 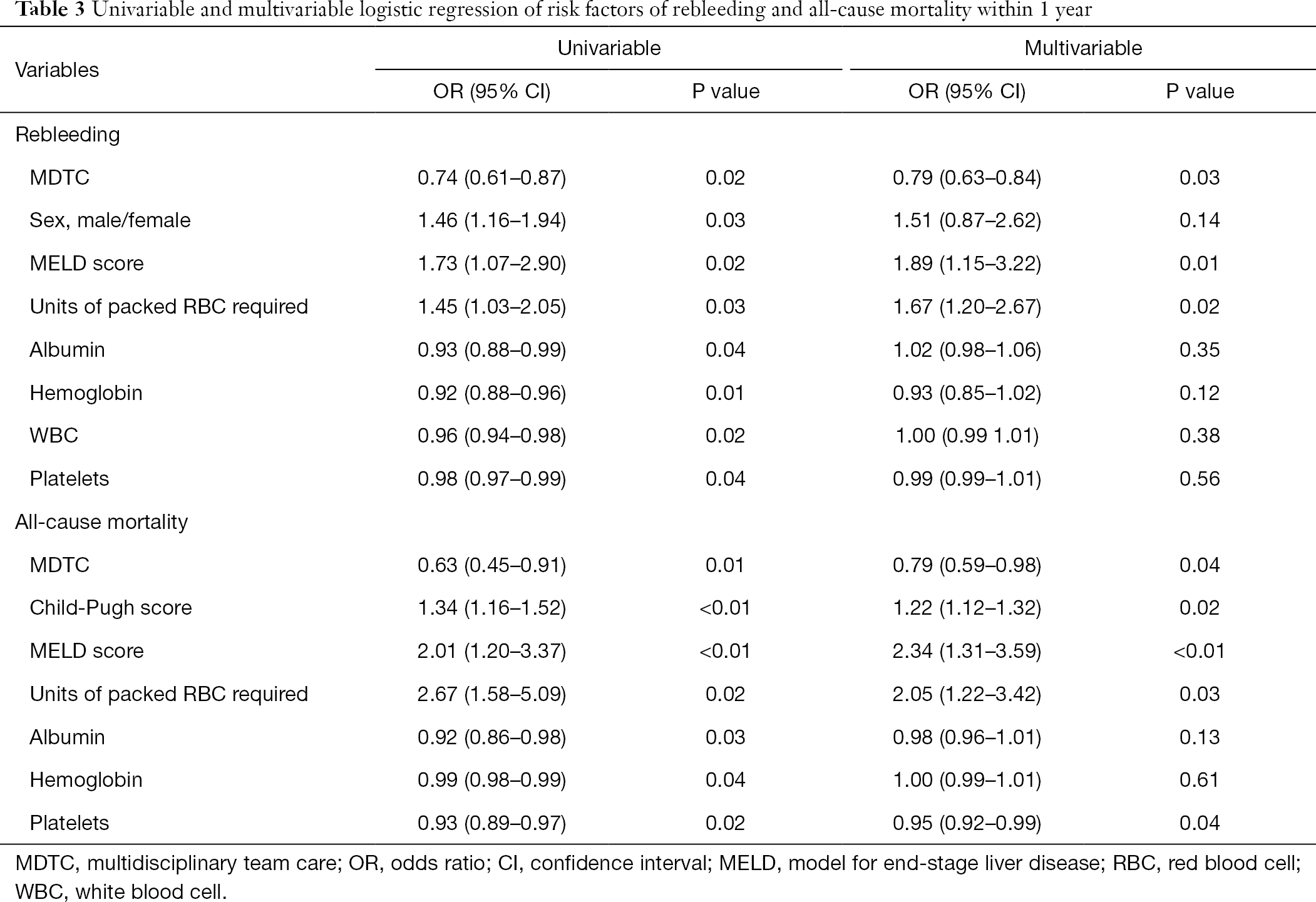 The quality of life of enrolled cirrhotic patients with UGIB within 4 weeks after discharge was assessed using the EQ-5D-5L. The results shown in Table 4 indicated that patients in the MDTC group felt less discomfort and depression than those in the traditional care group (both P<0.01). As for overall quality of life, patients in the MDTC group also had a significantly higher score than the traditional care group (0.68±0.22 vs. 0.76±0.24, P=0.02). The risk factors of quality of life in enrolled patients were then evaluated using multivariable linear regression, as shown in Table 5. MDTC was found to be related to improved quality of life, while older age and higher MELD scores were the risk factors of quality of life in cirrhotic patients with UGIB. 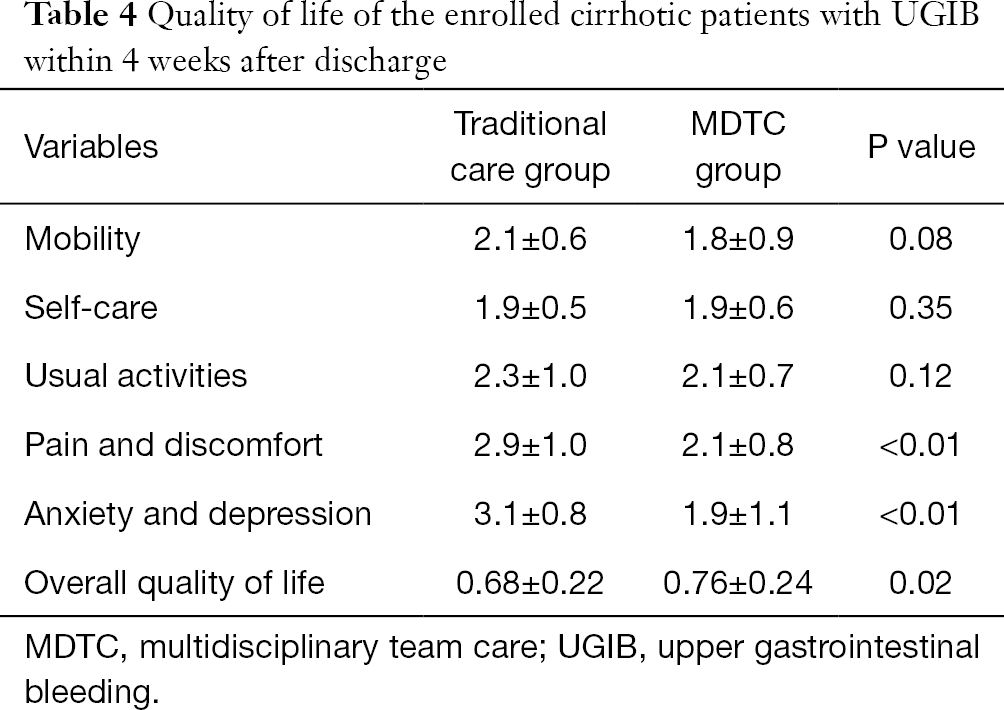 The incidence of rebleeding was another important outcome in this study. Certain blood markers have been reported to be useful in predicting rebleeding in UGIB patients, such as C-reactive protein, prealbumin, and D-dimer (18,19). However, we did not find a meaningful laboratory test indicator for rebleeding in this study. MELD score and required units of packed RBCs were the only 2 risk factors for rebleeding according to the multivariable logistic regression analysis.

The most important aim of this study was to verify the protective role of MDTC in cirrhotic patients with UGIB. Our results indicated that MDTC could not only reduce mortality and the incidence of rebleeding, but also improve the quality of life of enrolled patients. Tsai et al. also found that MDTC could significantly reduce mortality in patients with breast cancer (21). The main reason why MDTC improved the prognosis of patients was that multidisciplinary cooperation and improved team performance relieved the anxiety and depression of patients, as shown in Table 4. Improvements in the psychological status of patients increases compliance, which makes it easier for patients to cooperate with medical staff, leading to improvements in prognosis. Despite these advantages, there were still some problems with MDTC, including increased workload and lack of leadership. The digestive disease specialized nurse usually acted as the leader of the team to organize and coordinate the work of team members in this study. However, the increased workload made it hard for the specialized nurse to integrate teams and assign tasks in a timely manner. These problems have also been described in several previous studies, warranting further improvement in these processes (22,23).

There were some limitations in this study. Firstly, this was a retrospective study. Some laboratory tests were not performed in the enrolled patients, such as prealbumin and D-dimer tests. This might have introduced bias into the multivariate analysis. Secondly, the EQ-5D-5L was used in this study to assess the quality of life of enrolled patients. EQ-5D-5L is one of the most commonly used scales to evaluate quality of life, however, it is relatively simple compared to some other scales, and can only provide limited information about patients. The use of scales that take less time but provide sufficient information would therefore be more beneficial for future studies. Thirdly, the follow-up period was one year, relatively short for the study, and we will prolong the follow-up period in the future.

In conclusion, this retrospective cohort study enrolled 206 cirrhotic patients with UGIB in order to analyze the effects of MDTC on prognosis and quality of life. As expected, MDTC, compared with traditional care, could reduce the incidence of rebleeding and mortality not in the short term but over the long term. Furthermore, MDTC was useful for relieving anxiety and improving the quality of life of patients. Therefore, MDTC may be worth extending into several other fields.

Reporting Checklist: The authors have completed the STROBE reporting checklist. Available at http://dx.doi.org/10.21037/apm-21-85

Conflicts of Interest: All authors have completed the ICMJE uniform disclosure form (available at http://dx.doi.org/10.21037/apm-21-85). The authors have no conflicts of interest to declare.

Ethical Statement: The authors are accountable for all aspects of the work in ensuring that questions related to the accuracy or integrity of any part of the work are appropriately investigated and resolved. All procedures performed in this study involving human participants were in accordance with the Declaration of Helsinki (as revised in 2013). The study was approved by ethics board of Third Affiliated Hospital of Nantong university (NO. 2019029). Individual consent for this retrospective analysis was waived.