Intravenous (IV) catheters are widely used for clinical infusion; they reduce the pain caused by repeated puncture, facilitate emergency salvage, and improve medical staff efficiency (1). However, IV catheter insertion may cause adverse reactions such as puncture-site infection, liquid leakage, phlebitis, venous thrombosis, and subcutaneous hematoma. Furthermore, plugging of catheters may occur, which requires reinsertion. Indeed, reinsertion has been reported in 10−40% of patients receiving IV catheter (2). Catheter plugging may be caused by backflow of venous blood, patient movement, incomplete flushing after parenteral nutrition infusion, inappropriate needle type, too rapid injection, or improper selection of the tube-sealing solution (3). Of these, improper sealing operation by nurses, excessive movement of patients, and venous blood return due to high venous pressure in limbs after sealing are the most common causes.

In 1999, the PosiFlow regulator was introduced to China. Since then, compared to traditional tube sealing, it has been shown to significantly reduce the incidence of adverse events such as coagulation in the IV catheter hose and infusion particles and pollution caused by repeated puncture of the heparin cap. Its design, with dead space of only 0.06 mL, is especially convenient for operation, while the cruciform diversion trench facilitates input of liquid. A vortex is generated by the internal design that automatically advances the liquid into the vein, thus preventing plugging caused by venous blood return, reducing complications caused by the tube-sealing solution and repeated puncture of the heparin cap, and extending the usage time of the IV catheter (4). However, according to Li (4), although the rate of blood return is significantly lower than before using PosiFlow, the incidence is still high. It is still necessary to examine the best methods for reducing blood return and extending the usage time of IV catheter using existing technologies. In this randomized controlled trial, we examined the efficacy of combining PosiFlow and an infusion clip for preventing catheter plugging caused by venous blood return.

We present the following article in accordance with the CONSORT reporting checklist (available at http://dx.doi.org/10.21037/apm-21-145).

From January 2017 to August 2017, 960 patients requiring IV catheter insertion during hospitalization in our department were recruited to this study. Inclusion criteria were as follows: (I) age under 70 years old, (II) more than 5 days of perfusion and infusion time plus at least 5 hours per day, (III) intact skin without scarring, inflammation, ulceration, edema or induration, and normal limb movement, (IV) conscious and able to sign the informed consent. Exclusion criteria were as follows: edema, hypoproteinemia, and coagulation dysfunction.

The study was approved by the Human Research Ethics Committees of the Second Affiliated Hospital of Army Medical University (2019-065-01). All procedures performed in this study involving human participants were in accordance with the Declaration of Helsinki (as revised in 2013). Written informed consent was provided by the participants prior to randomization.

Catheter plugging and blood return were chosen as primary outcomes.

After unified training, 10 nurses were assigned responsibility for measuring, observing, and recording these indexes daily.

Participants requiring IV catheter insertion during hospitalization in our department were recruited from January 2017 to August 2017. There were no statistically significant differences in mean age, gender ratio, and primary disease distribution among the 4 groups (all P>0.05, Table 1). 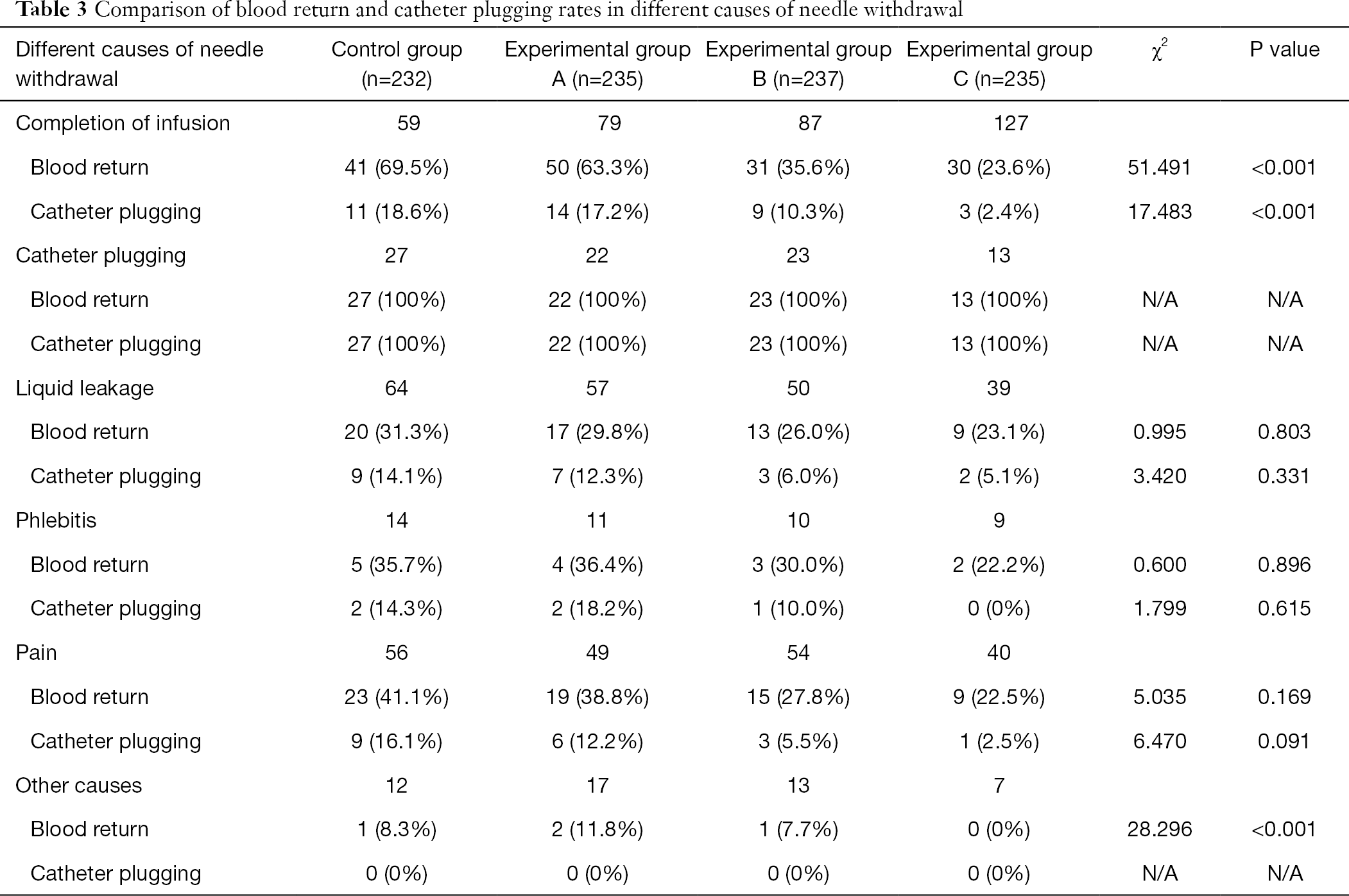 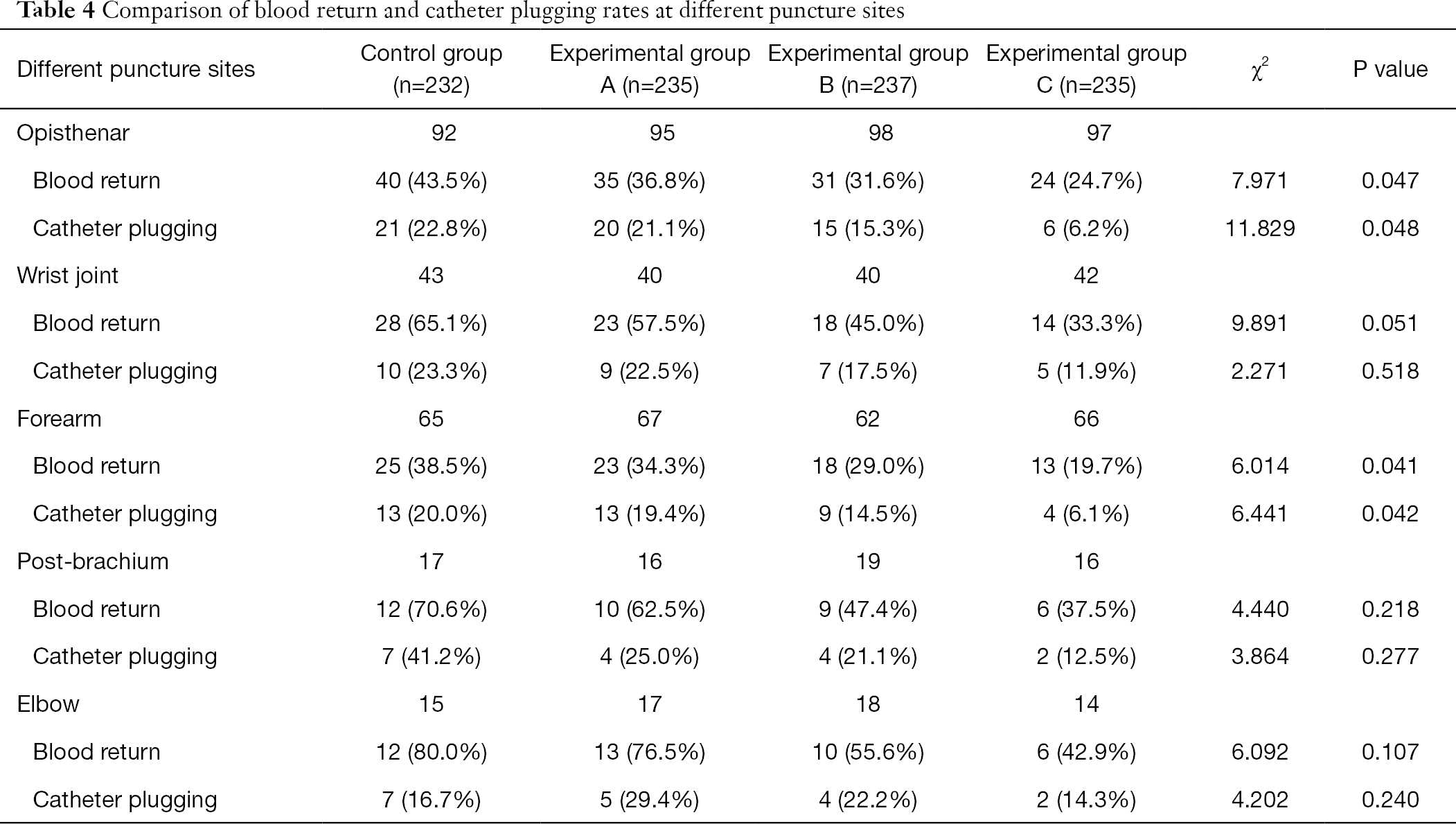 At present, the majority of models of IV catheters adopted by our department are equipped with infusion clips, which should be closed when using 0.9% sodium chloride solution or pre-flushing sealing solution. However, there are no definitive rules on whether it is necessary to clamp the infusion clip after using the PosiFlow, nor clear stipulations provided by the Infusion Treatment Nursing Practice Guideline and Rules. According to the relevant literature, it is reasonable to disconnect the infusion connector after pulse sealing without clamping the infusion clip while using the PosiFlow. During clinical infusion, we found that a drop of liquid overflowed from the tip of the catheter after using the PosiFlow and infusion clip, achieving the effect of secondary positive pressure sealing and helping prevent venous blood return. After applying this improved method, the rate of catheter plugging for any reason was only 2.36−5.12%. Furthermore, the usage of an infusion clip can further enhance the benefits of the PosiFlow regulator for preventing venous catheter plugging caused by blood return. This procedure should be a standard operating procedure for routine IV catheter insertion (5).

The choice of puncture site also influenced the rate of IV catheter plugging caused by venous blood return, with significantly lower incidence at the forearm compared to other puncture sites. Thus, whenever possible, the nurse should insert an IV catheter into the forearm to reduce the risk of catheter plugging due to venous blood return (6). This is consistent with the recommendations of the Infusion Treatment Nursing Practice Guidelines and Rules (2016 edition).

This methodology is simple, effectively reduces the rate of IV catheter plugging by venous blood return, and offers the additional benefit of being more cost effective. On average, 80 (107.8 RMB) fewer IV catheter sets and PosiFlow regulators were required every month in group C, which would save more than 100,000 RMB annually. Use of the PosiFlow and clip also reduced the number of syringes (0.35 RMB) and 0.9% sodium chloride solution (1.46 RMB) discarded due to catheter plugging, for a total savings of 1,781.04 RMB. The normal puncture time for each IV catheter is around 10 minutes, so this method will also save nurses 9,840 minutes per year in time required for re-puncture, equivalent to 20.5 working days. Further, 2 minutes on average is required for IV catheter flushing necessitated by catheter plugging, so this method will save an additional 1,968 minutes per year, equivalent to 4.1 working days.

The use of PosiFlow with an infusion clip will reduce both material and labor costs as well as staff time.

Reporting Checklist: The authors have completed the CONSORT reporting checklist. Available at http://dx.doi.org/10.21037/apm-21-145

Conflicts of Interest: All authors have completed the ICMJE uniform disclosure form (available at http://dx.doi.org/10.21037/apm-21-145). The authors have no conflicts of interest to declare.

Ethical Statement: The authors are accountable for all aspects of the work in ensuring that questions related to the accuracy or integrity of any part of the work are appropriately investigated and resolved. The study was approved by the Human Research Ethics Committees of the Second Affiliated Hospital of Army Medical University (2019-065-01). All procedures performed in this study involving human participants were in accordance with the Declaration of Helsinki (as revised in 2013). Written informed consent was provided by the participants prior to randomization.