Extraction of the mandibular third molar (M3M) is a widely performed procedure with several possible postoperative complications (1). These morbidities may aggravate the body’s stress response and prolong the recovery (2). The postoperative symptom severity (PoSS) has been proposed and proved to be a reliable, valid, and responsive measurement for assessing health outcomes after the removal of the third molars (3,4). It has been often used to evaluate PoSS after M3M removals (5,6) and has been attracted much attention in recent years. PoSS has been associated with demographic and surgical variables (7,8). Difficulty and complications related to the procedure have been discussed in the literature (9,10).

Recently, several regression models have been proposed to evaluate the surgical time of M3M extraction (19,20). However, most of these observational studies may have been biased because prognostic factors were unequally distributed between patients who were exposed or not exposed to an intervention. Although the effectiveness and clinical role of time have been partly discussed, it would be preferable that adjusted or stratified analysis was used to create prognostically homogeneous groups and to combine the effect estimates across the groups. Moreover, it would be much more informative to measure the non-linear relationship between time and postoperative symptoms.

Therefore, we hypothesized that the operation time may be independently associated with PoSS among different impaction status classifications after adjustment and stratification for confounders. The aim of our study was to examine the association between operation time and PoSS at different degrees of impacted in patients with M3M removal.

We present the following article in accordance with the STROBE reporting checklist (available at http://dx.doi.org/10.21037/apm-20-2340).

In accordance with the research purpose, a hospital-based retrospective observational study was carried out using a self-reported questionnaire in Tianjin, China. Adults who had surgical extractions of M3Ms between May 2016 to June 2017 at the Department of Oral and Maxillofacial Surgery were eligible. Patient recruitment complied with the following inclusion criteria: indication for M3Ms surgery under local anesthesia and good health without systemic diseases. Patients with systemic diseases or behavior disorders, the absence of the mandibular second molar, and who were unable to respond to questionnaires, were excluded. The study was conducted in accordance with the Declaration of Helsinki (as revised in 2013). The study was approved by institutional committee (No.: TMUhMEC2018110). Informed consent was taken from all the patients.

The primary independent variable was surgery operation time. We defined the operation time as the duration from the start of the incision to the end of the wound suture. It was further categorized into equal quartiles (Q1–Q4). The reference group was defined as <8.43 minute.

The primary outcome measure for the study was the total PoSS. The PoSS included seven subscales for evaluating the oral health-related quality of life (HRQOL) after M3M removal. The definition of PoSS was assessed using the postoperative symptom severity scale (PoSSe) questionnaire (3). The PoSSe score was calculated from the self-reported questionnaire items as follows:

Data were collected using a standardized form for each operation. The designated recorder was present at each operation. The covariates used in this study were classified as follows: (I) demographic data; (II) anatomical and radiographic variables that have been reported in previous literature; and (III) surgical operation-related factors.

Panoramic radiographs were used to classify the M3M according to the P-G classification system (14,22). This system classifies the teeth based on the amount of tooth covered by the anterior border of the ramus (Class I–III) and the impaction depth, relative to the adjacent tooth (Positions A, B, or C).

Anthropometric parameters were recorded using a standard protocol. The following confounders were recorded: patient variables [sex, age, body mass index (BMI), mouth opening, smoking status, and pre-surgery symptoms] and tooth-related variables (the Winter classification, number of roots, root curvature, and root morphology). The degree of mouth opening and tooth-related variables have been described in previous research (7,8,19). Patients were asked whether they had any history, symptoms, or signs of pericoronitis. Pre-surgery panoramic radiographs were used to evaluate tooth-related variables and P-G and Winter classifications. Furthermore, the root curvature was classified into two categories in accordance with the measured angle between the tooth length axis and the tangent of the curved root. Root morphology was defined as conical, spherical, and bifurcation, as described by Qiao et al. (7). To address potential sources of bias, Kappa values were used to assess consistency (Kappa =0.72, P<0.05), which indicating high consistency.

According to the standard operating procedures, local anesthesia was administered under the same conditions using either 2% lidocaine and 4% articaine. A contra-angle high-speed turbine (NSK Ltd., Tokyo, Japan) and a tungsten steel crack needle drill (NSK Ltd.) were used for conventional rotary osteotomy. The flap design was categorized as no flap, relaxing incision, triangular flap. The surgical procedure was recorded as elevator/forceps alone, bone removal or tooth sectioning, bone removal and tooth sectioning according to the degree of impaction of the M3M. Surgical experience was defined as the number of years since the completion of residency, which was categorized as 0–5, 5–10 or >10 years. We completed all protocols under the same environments to address potential sources of bias. Patients were given the usual postoperative instructions immediately after the surgery. Antibiotics and anti-inflammatory drugs were prescribed (usually cefuroxime 250 mg 2 times daily for 3 days and ibuprofen 60 mg three times daily for 3 days).

Data were collected using a standardized form for each operation. All data were entered into EpiData, version 3.1 (The EpiData Association, Odense, Denmark), and then transferred to SPSS (Version 25.0), and R, version 4.0.1 (R Foundation for Statistical Computing, Vienna, Austria) for statistical analyses. Distributions of continuous variables were assessed for normality using the Shapiro-Wilk (n≤2,000) tests. The distributions of all continuous variables were not normal in our study. Categorical variables were presented as percentages and continuous variables as medians (25%, 75% quantiles). The differences among categories regarding PoSS were examined using the Kruskal-Wallis (comparison of >2 groups) for continuous and ordinally distributed variables and the Chi-squared test was used for categorical variables. For further analysis, the presence of severe symptoms was used as a response variable and the operation time was used as independent variable. Logistic regression analysis was used to examine the association between the duration of surgery and the presence of serious symptoms after adjustment for potentially confounding factors. Interactions between the duration of operation and potential confounders were tested by the addition of cross-product terms in the regression model. We also used restricted cubic splines with three knots to flexibly model the association of operation time with PoSS. Adjusted odds ratios (ORs) with 95% confidence intervals (CIs) were also constructed. Nominal, two-tailed P values were used. P values less than 0.05 were considered statistically significant. 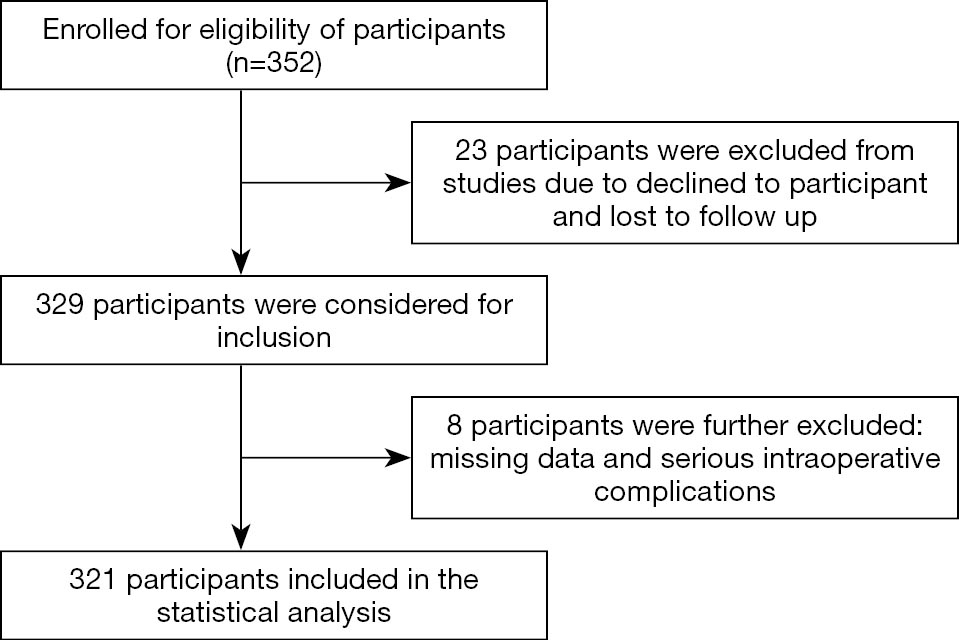 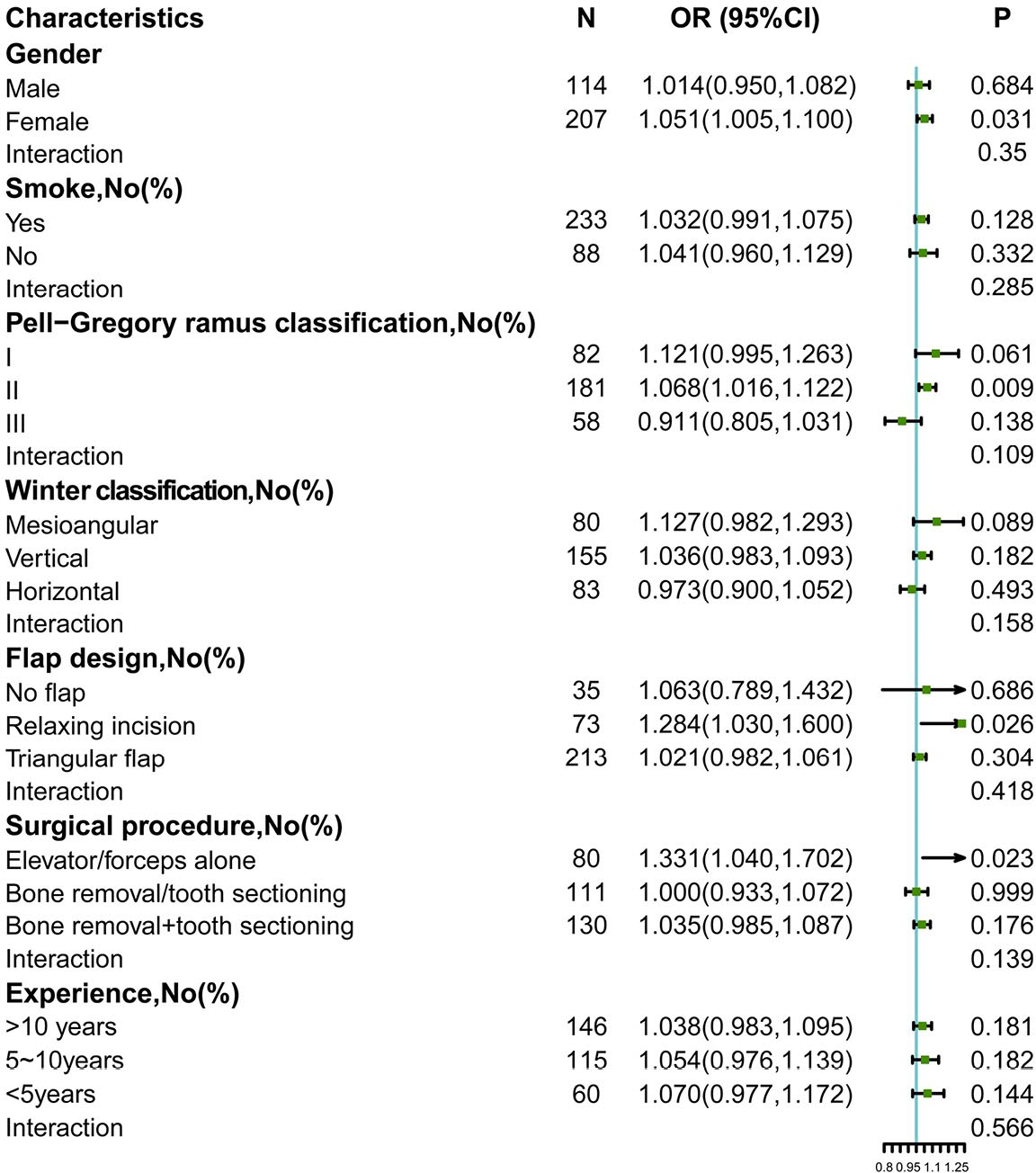 Analyses using the restricted cubic spline suggested a dose-response association between operation time and the PoSS OR (Figure 3). The risk of PoSS started to increase (P for non-linearity =0.117). The predicted OR of PoSS per 5 min incremental increase was 1.201 (95% CI, 1.18–1.26). Regarding the non-linear relationship between the operation time and PoSS, the plot showed a substantial increase in the risk within the surgical duration range. 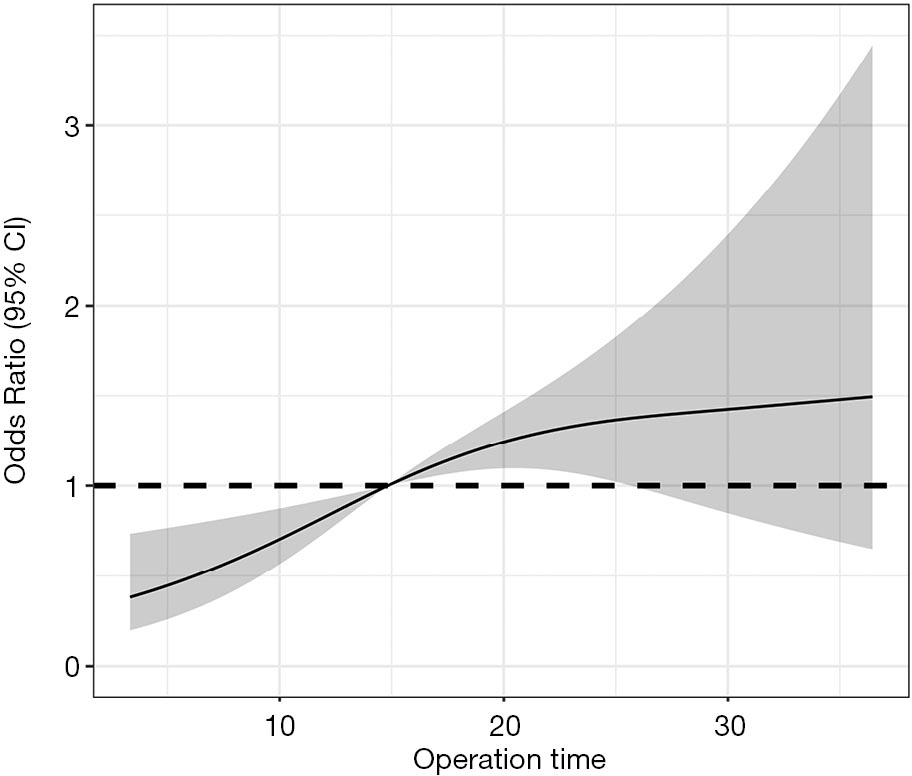 Figure 3 Restricted cubic spline analysis of the association between operation time and PoSS. The middle solid line indicates the point estimates of odds ratios and the shaded part indicate the lower and upper limits of the corresponding 95% confidence intervals. The horizontal dashed line is at odds ratio =1. Three knots were used for the restricted cubic spline analysis. The non-linear association was not observed (P for non-linearity =0.117). CI, confidence interval.

Our analyses found that operation time was significantly and positively associated with serious PoSS, independent of several risk factors, even adjustment for the P-G ramus classification. These results help to clarify the relationship between the operation time and PoSS.

Some studies have shown that prolonged operation time increases the likelihood of complications, and possibly results in postoperative symptoms (23). Several studies have also reported an association between impact status and postoperative complications (24-26). Current evidence support that operation time is strongly associated with the difficulty of the surgery (27). Phillips et al. showed that an increase in the risk of prolonged recovery for HRQOL outcomes and delayed clinical outcomes after third molar surgery (28,29). In general, insufficient space available in relation to the ramus means greater trauma and complications during the surgery. Since studies have shown that the severity of postoperative symptoms is related to the P-G classification (8), we first adjusted for this confounder. Our results are consistent with those of a previous study (29).

It is well known that many factors contribute to postoperative symptoms and prolonged recovery (28). We subsequently additionally adjusted for sex, age, BMI, the Winter classification, number of roots, root curvature, root morphology, pre-symptom, smoking status, flap design, operation procedure, experience, and mouth opening. The results of our study show that comparing the top and bottom quartiles, the risk PoSS increased by 2.031 times when adjusted for the P-G classification (OR 3.031, 95% CI, 1.551–5.923). After adjusting for the confounding factors (such as the P-G classification), the independent effect of operation time on the severity of PoSS was quantified. This result indicates that operation time may independently increase the risk of PoSS. After a similar multivariable adjustment for demographic and surgical characteristics, the effect of operation time on the risk of PoSS in patients with M3M extraction was weakened. This indicates that multi-factor adjustments played a role in controlling the confounding factors. Our study implied that longer surgical times may dictate a more aggressive pain regimen, including the use of opioids.

There are some limitations to the interpretation of the results. First, due to the limitations of a retrospective study, possible selection bias and the single-center sample population, may have been present in this research. Second, self-reported questionnaires are subjective indicators, which may be more prone to information bias and/or recall bias. Replication of these studies is required to enhance the generalizability and external validity of study findings. Third, although we adjusted for several potential confounding factors where appropriate, residual confounding from other unmeasured factors may remain.

In conclusion, the operation time is independently associated with PoSS in patients who underwent M3M removal. Minimizing the duration of surgery would not only improve the postoperative recovery but also maximize patient satisfaction.

We would like to thank Editage () for English language editing.

Reporting Checklist: The authors have completed the STROBE reporting checklist. Available at http://dx.doi.org/10.21037/apm-20-2340

Conflicts of Interest: All authors have completed the ICMJE uniform disclosure form (available at http://dx.doi.org/10.21037/apm-20-2340). The authors have no conflicts of interest to declare.

Ethical Statement: The authors are accountable for all aspects of the work in ensuring that questions related to the accuracy or integrity of any part of the work are appropriately investigated and resolved. The study was conducted in accordance with the Declaration of Helsinki (as revised in 2013). The study was approved by institutional ethics board of School and Hospital of Stomatology Tianjin medical university (No.: TMUhMEC2018110) and informed consent was taken from all the patients.