Stereoelectroencephalography (SEEG) is widely used for surgical evaluation of epilepsy patients whose epileptogenic zone cannot be located by a noninvasive assessment approach (1-3). The safety and effectiveness of SEEG electrodes depend on accurate implantation. With the development of frameless stereotactic robot-assisted system technology, the SEEG electrode angularity and length can be increased to span multiple lobes. However, compared with that of conventional electrodes, the implantation of long-spanning electrodes is highly challenging, especially for high skew-angle trajectories (more than 30 degrees from classical orthogonal trajectories). This can lead to a larger error in the accuracy, as oblique trajectories, often used for insular lobe (4), hippocampus (5), or hypothalamic hamartoma (6), could lead to the drill sliding at the entrance of the skull and a subsequent error in the direction of the electrode. The accuracy of SEEG not only influences the safety of the procedure but also could be related to the therapeutic efficacy because oblique, long-spanning electrodes are often designed for radiofrequency thermocoagulation. We report the results of a quantitative, multiple influencing factor analysis of the accuracy of 61 multilobe-spanning SEEG electrodes in a subset of 39 patients.

We present the following article in accordance with the STROBE reporting checklist (available at http://dx.doi.org/10.21037/apm-20-2123).

We retrospectively reviewed the medical and imaging data of 39 consecutive patients who received multilobe-spanning SEEG electrode implantation due to intractable epilepsy from January 2017 to January 2020 at Xuanwu Hospital by a single surgeon. A total of 322 SEEG electrodes were implanted. Noninvasive investigations, including scalp electroencephalography, magnetic resonance imaging (MRI) and semiology analysis, were performed for all patients, which indicated the diagnosis of focal epilepsy and candidates for SEEG implantation. All patients underwent SEEG electrode implantation procedures for intracranial electrophysiological monitoring and minimally invasive treatment after a multidisciplinary team (MDT) evaluation.

The study was conducted in accordance with the Declaration of Helsinki (as revised in 2013). The study was approved by the ethics committee at Xuanwu Hospital (No. LYS [2019] 097) and informed consent was taken from all the patients.

The SEEG electrode implantation strategy was determined by the MDT, which included neurosurgeons, neurologists, neuroradiologists and electrophysiologists specializing in epilepsy. SEEG electrodes with a diameter of 0.8 mm and 5–18 contacts (Alcis, Besancon, France) were used in our center. A three-dimensional magnetization-prepared rapid acquisition gradient echo (MPRAGE) sequence was carried out for presurgical SEEG electrode trajectory planning via ROSA software, and a thin-slice computed tomography (CT) scan was performed, with or without scalp fiducials attached to the head, for robotic registration.

The electrodes were implanted under general anesthesia via the following surgical procedure. The head was positioned by a Mayfield clamp or Leksell frame as the head holder, which was fixed with the ROSA system. Next, laser facial scanning or scalp fiducial markers were registered by the robotic system. Then, the skin and skull were drilled with a regular drill; a predrill procedure involving a thick, flat-tip drill was used to grind a platform onto the skull to avoid trajectory deviation for electrodes with a planned angle of less than 60 degrees with respect to the skull surface (details in another paper, unpublished). After attaching the bolt, the dura was ruptured by a needle and a blunt guide to establish a tunnel for electrode implantation.

A thin-slice CT scan was performed within 1 day after implantation and was then fused with the preoperative CT scan using ROSA software. The electrode position on the postoperative CT scan was then compared with the planned trajectory on the preoperative MPRAGE images. The midcommissural point (MCP) was labeled for all patients as the coordinate origin (X = Y = Z =0), which was used as the reference point to determine the Cartesian coordinates of the tips and entry points of both the planning and actual electrodes. We defined the coordinates of the actual target point as (X0, Y0, Z0), the actual entry point as (X1, Y1, Z1), the planning target point as (X2, Y2, Z2), and the planning entry point as (X3, Y3, Z3). The entry points of the electrodes were selected as the point at which they intersected the inner plate of the skull. The Euclidean distances between two points were calculated using the formula:. The angular deviation was calculated as the intersection of the lines corresponding to the planning electrode and the actual electrode. 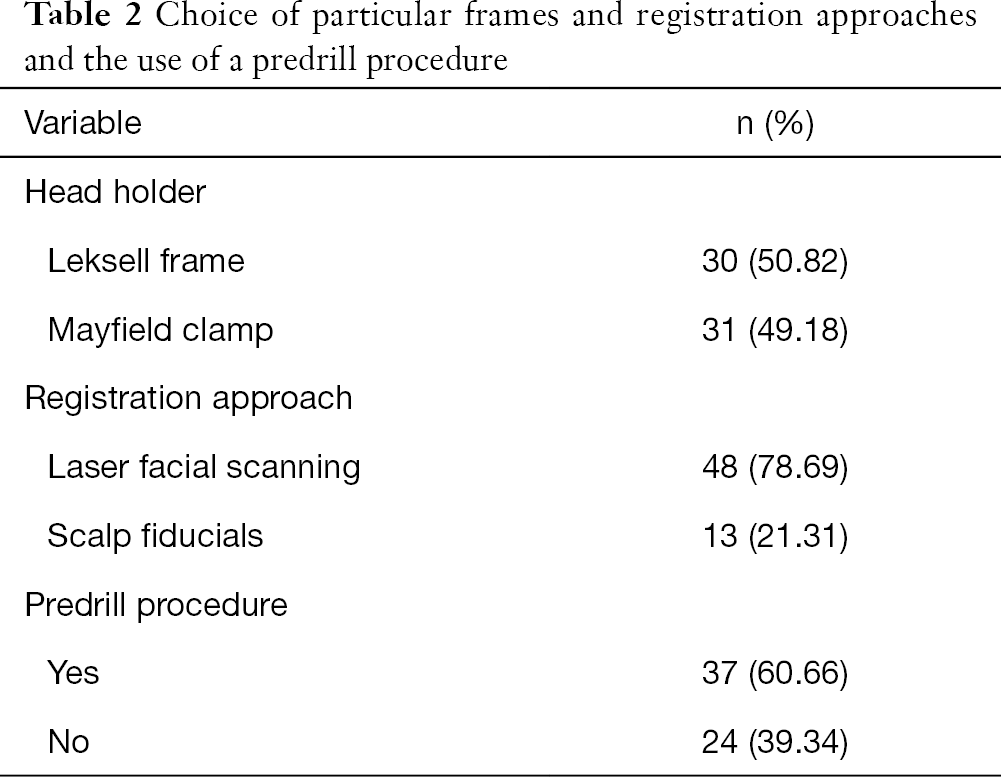 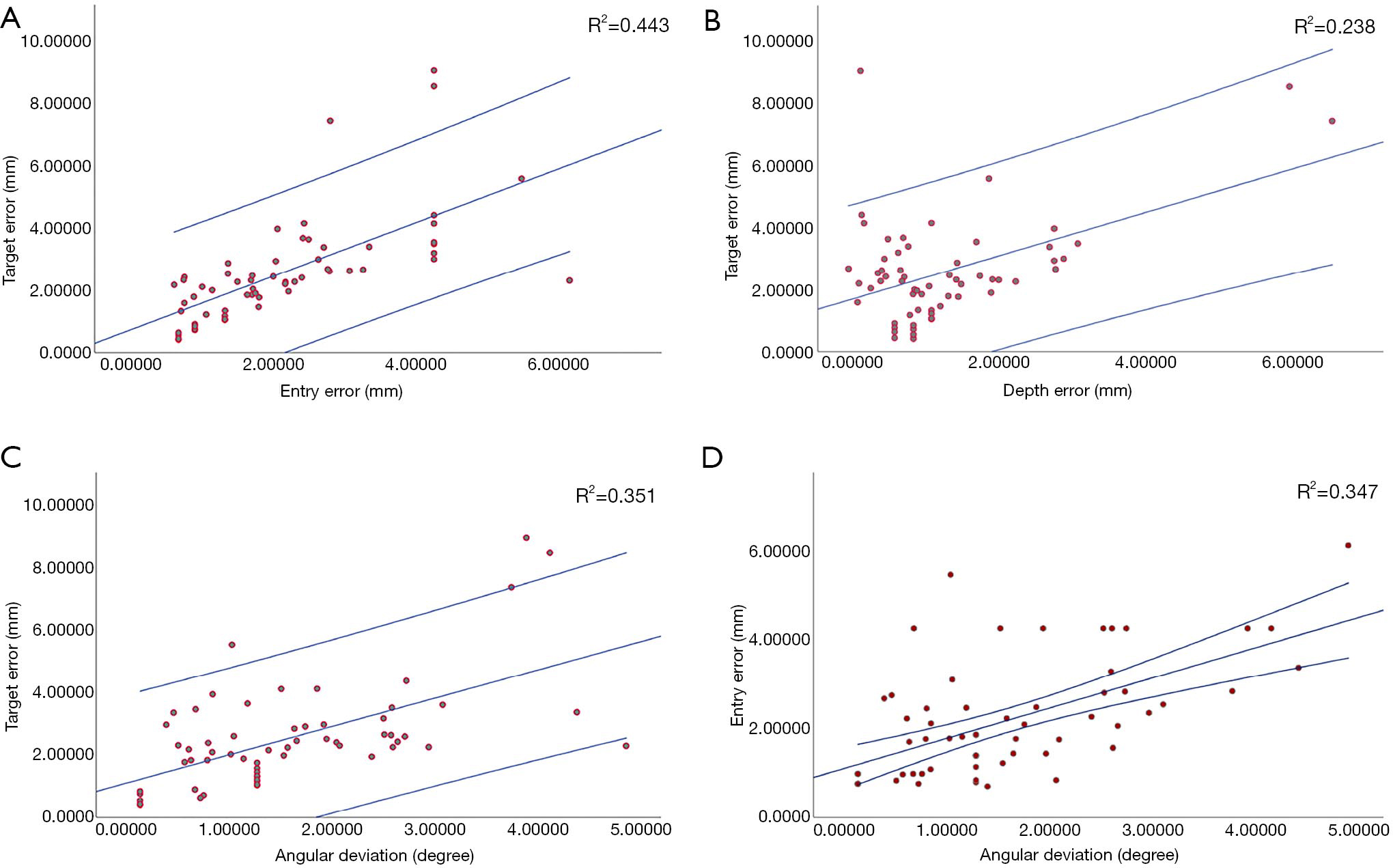 The development of stereotaxy can be dated back 100 years, and frameless stereotaxy has been shown to be comparable to frame-based stereotaxy in terms of accuracy, diagnostic yield, morbidity, and mortality (7,8). However, the craniotomy direction and angle are more flexible in frameless stereotaxy than those in frame-based stereotaxy. The SEEG electrode can span multiple lobes using a frameless stereotactic robot-assisted system with a direction and angle suitable for clinical needs (Figure 2). Nevertheless, compared with conventionally-implanted electrodes, accurately implanting SEEG electrodes is challenging, especially for high skew-angle trajectories (more than 30 degrees). This can lead to a larger error in the accuracy because an oblique trajectory often leads to the drill sliding at the entrance of the skull and a subsequent error in the direction of the electrode (9).

Accuracy is the key to depth electrode implantation. Complications could arise from deviations in electrode placement, such as a failure to localize the seizure onset zone or injury to blood vessels and important functional areas (10). In the present study, we analyzed the factors that influenced the accuracy of multilobe-spanning SEEG electrodes implanted using a frameless stereotactic robot-assisted system to offer a methodology to improve electrode placement accuracy. Target errors were mainly caused by entrance errors, angular errors, depth errors and direction deviations. In the present study, we showed that the target error exhibited significant correlations with the entrance error, depth error, and angular error by multifactor linear regression, and thus deviation in the direction of the electrode was excluded from the subsequent statistics. Therefore, to control the target error, measures should be taken to minimize the effects of influencing factors. None of the techniques for SEEG electrode implantation directly affected the depth error, as this is controlled by the surgeon. It is necessary to perform accurate calculations to the decimeter/millimeter level and have them doublechecked by two medical staff members. Iordanou et al. noted that SEEG trajectories with a planned angle of >30 degrees had significantly higher radial errors than trajectories with a planned angle of <30 degrees (9). They suggested lowering the robotic sleeve slowly until it pinches the skin slightly to decrease the distance from the robotic guide to the target. Additionally, when drilling is initiated, very slight pressure should be applied initially to allow the drill to penetrate the outer cortex of the skull. In our previous study, we developed a predrill procedure that uses a thick, flat-tip drill to grind a platform onto the skull surface before burr hole drilling. The analysis showed that the predrill procedure could significantly reduce deviations in the electrode angle.

Entrance errors were mainly caused by angular deviations and the choice of the stereotaxic system and registration approach. In a single-center study, Girgis et al. demonstrated that frame-based SEEG implantation is significantly more accurate and precise and results in more clinically useful electrode contacts than frameless implantation using a navigation guidance system (11). Cardinale et al. demonstrated a significant improvement in the SEEG electrode accuracy with the NeuroMate robotic system than with the Talairach frame (8). A similar study showed that the entrance error was not significantly different between the ROSA robotic system and the Leksell frame (12). In the present study, laser facial scanning registration did not significantly improve the entrance accuracy. Bone fiducials may lead to high registration accuracy due to their stability (13). A retrospective study demonstrated that the bone fiducial registration approach did not significantly improve the target error, entry error or angular deviation over laser facial scanning registration (14). The authors concluded that this was due to the use of high-definition CT scans as registration images and of bone fiducials as posterior trajectories, which may affect the accuracy. In our center, laser facial scanning registration is commonly used in clinical practice. However, the facial expression during the CT scan and the pull of the frame nail on the scalp may affect the accuracy of registration. The patients in our center are required to maintain neutral facial expressions and to not wear anything, including a hat or mask, during the CT scan. According to the present study, the choice of head holder resulted in a statistically significant difference in the electrode target and entry point errors. The Leksell frame seemed to be more stable than the Mayfield clamp in subjective experience during clinical use. In addition, we noticed that the target errors of some electrodes were smaller than the entry errors, which may be due to a rotation offset along the center of the brain caused by the registration.

Limitations still exist in the present study. The sample that we evaluated was from a single center, which may have resulted in selection bias. Moreover, as SEEG electrodes were implanted based on a frameless stereotactic robot-assisted system, the reference error, including the lateral, longitudinal and rotary deviation, could not be obtained for analysis. These deviations were finally shown as the entrance error, angular deviation and radial error. However, due to recent studies, the reference error is becoming very low. Additionally, we did not compare the accuracy between different stereotactic systems. A further study to analyze SEEG accuracy based on different stereotactic systems may be performed if necessary.

Reporting Checklist: The authors have completed the STROBE reporting checklist. Available at http://dx.doi.org/10.21037/apm-20-2123

Conflicts of Interest: All authors have completed the ICMJE uniform disclosure form (available at http://dx.doi.org/10.21037/apm-20-2123). The authors have no conflicts of interest to declare.

Ethical Statement: The authors are accountable for all aspects of the work in ensuring that questions related to the accuracy or integrity of any part of the work are appropriately investigated and resolved. The study was conducted in accordance with the Declaration of Helsinki (as revised in 2013). The study was approved by the ethics committee at Xuanwu Hospital (No. LYS [2019] 097) and informed consent was taken from all the patients.