Alone with the change of the common causative organisms, some scholars have studied the response of renal abscess to antibiotic therapies to avoid unnecessary invasive treatment. However, waiting for the response may delay early invasive treatment and lead to poor prognosis. Therefore, some indicators related to disease severity in early onset may be a good alternative. Red blood cell distribution width (RDW) is associated with the severe morbidity and mortality of some Gram-negative associated chronic diseases, which has reported by some scholars (12). In view of this point, we designed this retrospective study to identify whether RDW can be used as a factor that to provide reference for the treatment of renal abscess. We present the following article in accordance with the STROBE reporting checklist (available at http://dx.doi.org/10.21037/apm-20-2305).

All patients with renal abscess in our institution between April 2016 and November 2019 were collected, and 38 cases with the characteristic of initially diagnosis and no prior treatment (antipyretics excepted) were enrolled. Patients without complete image data were excluded. The diagnosis of renal abscess was made by experienced radiologists with the CT performance of abscess confined to the renal cortex, central medulla or calyces (13). Conservative treatment group and surgical intervention group were set based on the treatment of patients. The data of basic characteristics, laboratory examination and imaging data before treatment were collected and the clinical data between two groups were analyzed and compared respectively. The maximum diameter was measured for each abscess as the size of renal abscess with the sum of maximum diameters of all the abscess in one kidney for multiple renal abscesses. Renal dysfunction was defined as estimated glomerular filtration rate less than 90 mL/min*1.73 m2 and nonfunctional kidney was defined as unilateral estimated glomerular filtration rate less than 10 mL/min*1.73 m2.

EAU guidelines point out that empirical antibiotic treatment for urological infection was necessary, with fluoroquinolone, group 3b cephalosporin or carbapenem being the most common used (14). In our study, both two groups received empirical antibiotic treatment after admission with fluoroquinolones, Group 2, 3 cephalosporin or aminoglycoside. Antibiotics were adjusted on the basis of drug sensitivity test and the response of initial antibiotic therapy. The vast majority of patients got clinically effective treatment, and patients who fail in initial treatment ultimately succeed in further treatment. Clinically effective treatment involved cure and clinical improvement. The standard of cure was the disappearance of clinical symptoms and abnormal examination results. When the clinical symptoms were significantly relieved and laboratory tests got improved, but not yet fully normalized and antibiotic therapy was still required, the outcome was considered as clinical improved (2).

The study was conducted in accordance with the Declaration of Helsinki (as revised in 2013). The study was approved by institutional board of the Peking University People’s Hospital (2016-010) and informed consent was taken from all individual participants.

IBM SPSS Statistics Version 25.0 was used for all the data analysis. The independent samples t-test, Mann-Whitney U Test and Fisher’s Exact Test were used for different variables. On the basis of univariate analysis, multivariate analysis was carried out for variables with P value less than 0.2, and ROC curve was drawn for variables with statistical difference. The standard for statistical difference was P value less than 0.05.

There were 24 (63.16%) female patients and 14 (36.84%) male patients. The average age of all the patients with renal abscess in this study was 48.87±15.89 years old and the distribution was wide, ranging from 22 to 82 years old. The clinical manifestations of renal abscess include fever, lumbago, chills, abdominal pain, nausea, vomiting, with fever (76.32%) and lumbago (52.63%) being the most common. Diabetes and urolithiasis with the ratio of 42.11% and 42.11% respectively were the most common comorbidities in our study. Twenty (52.63%) patients received drug therapy only and 18 (47.37%) patients got surgical intervention. Among all the variables of the basic characteristics, only diabetes showed a significant difference (P=0.008) between two groups. The data details are represented in Table 1. 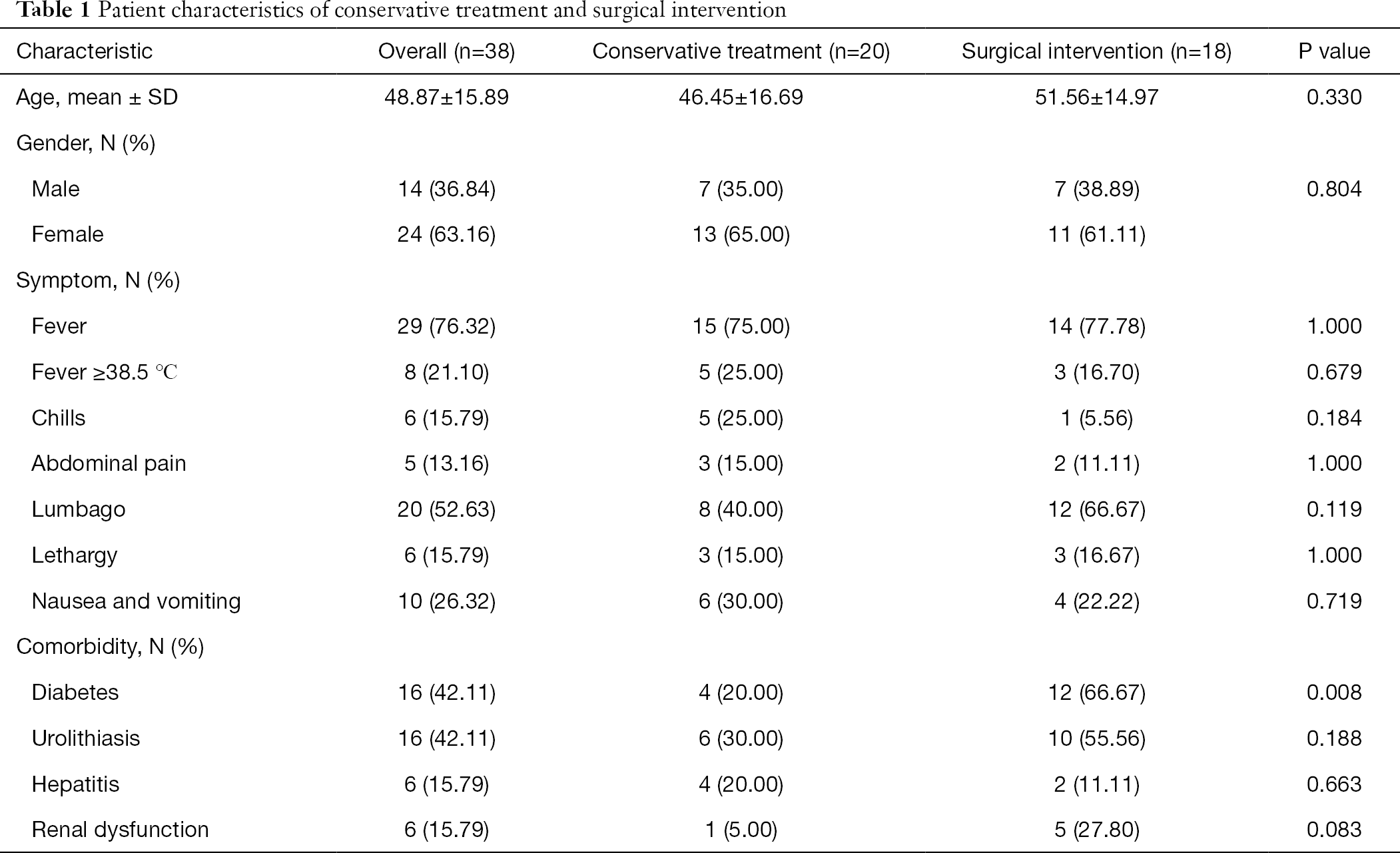 The results of blood and urine test on admission were used as reference data. Variables with P values less than 0.05 between the two groups included PLT, RDW%, BUN, PLR, AG and WBC in urine, as shown in Table 2. The median value of initial RDW in all patients was 13.62%, with 13.15% in conservative treatment group and 14.20% in invasive treatment group. Significant difference was shown in the size of renal abscess (2.77±1.48 vs. 5.85±2.67 cm), with the surgical intervention group being larger (P<0.001, Table 3). 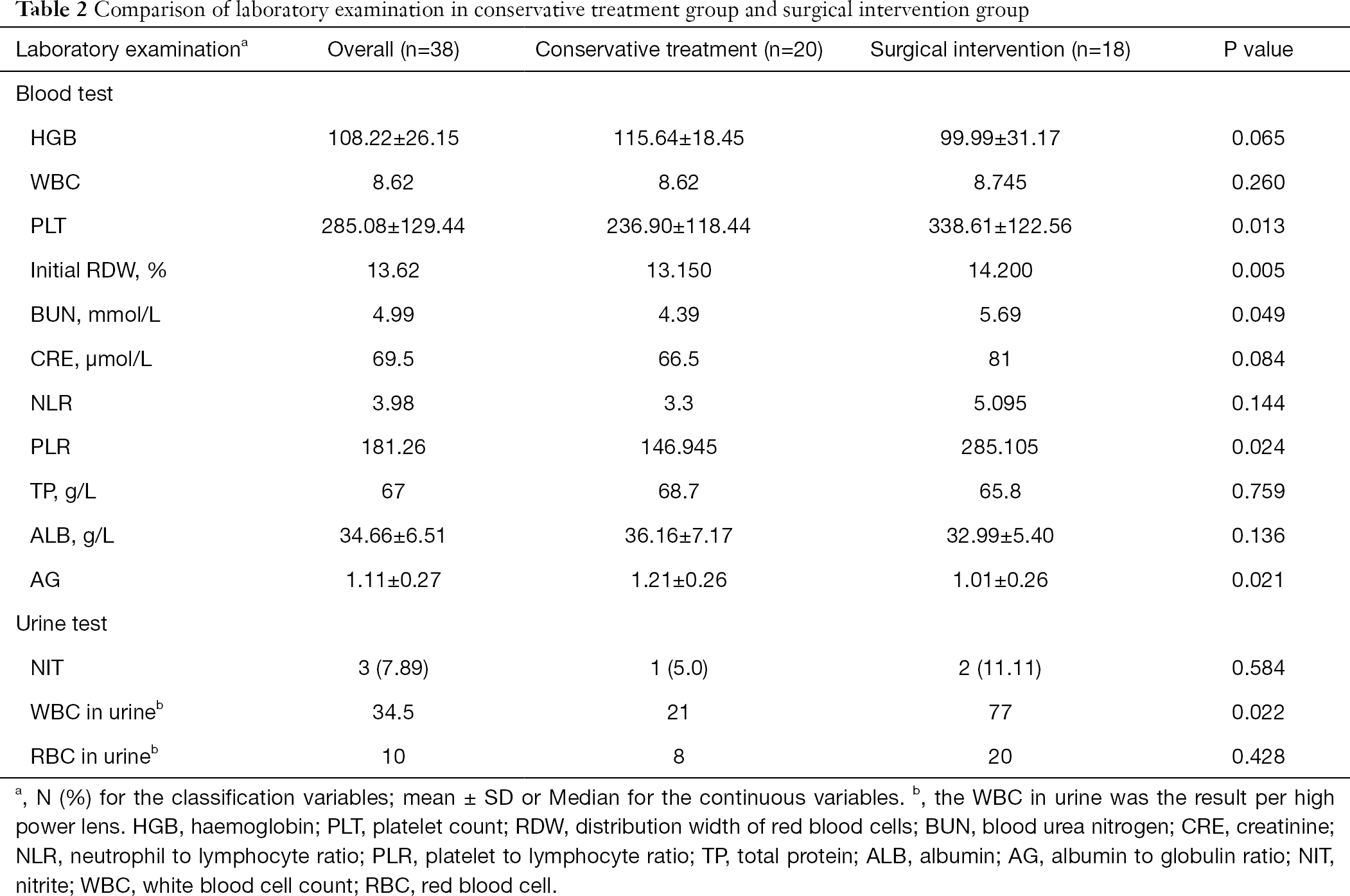 In patients who received conservative treatment, 19 cases showed clinical improvement or cure. While in patients who received surgical intervention initially, 3 patients showed no clinical improvement or cured, with one patient received further treatment of surgical drainage and two patients required nephrectomy after the diagnosis of nonfunctional kidney. Of the 4 patients who failed the initial treatment, 3 had a renal abscess between 3 and 5 cm, and 1 patient with large abscess failed due to long-term use of bone marrow suppressive drugs. After summarizing the characteristics of 4 patients with initial treatment failure, it can be found that 3 patients got the size of renal abscess of 3–5 cm, and 1 patient failed due to long-term use of myelosuppression drugs. 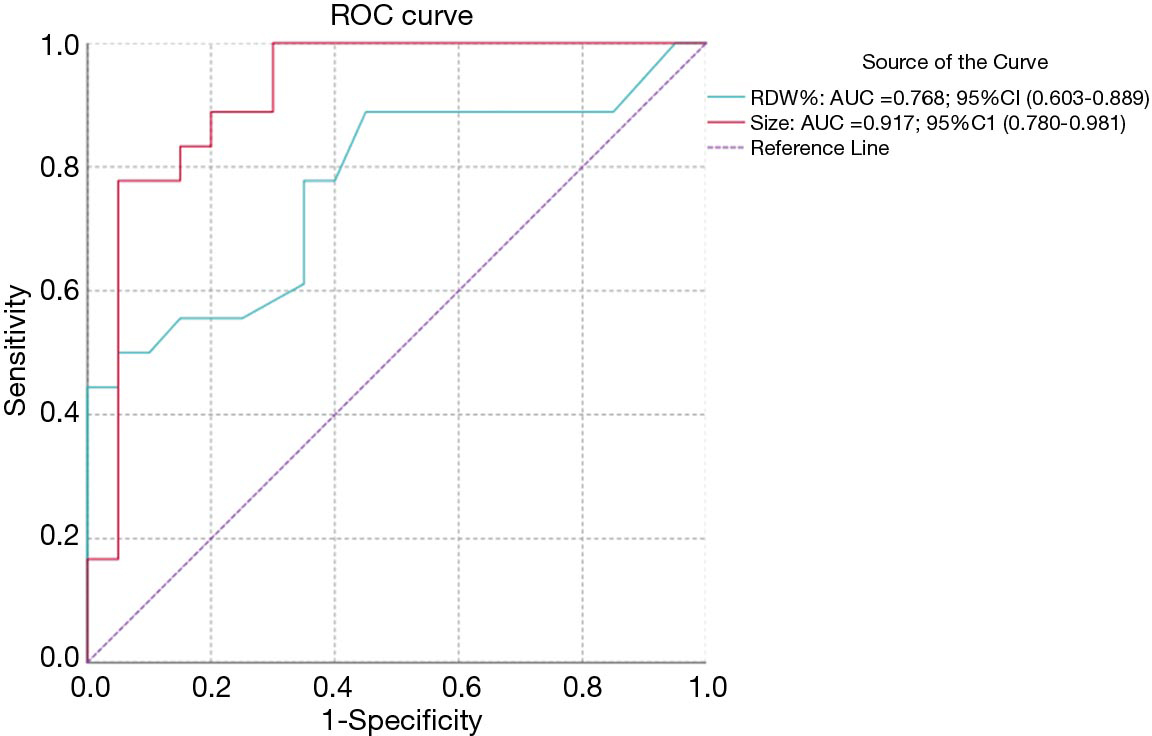 Renal abscess characterized by low incidence and high mortality is a clinically important diagnosis during clinical work. The update of examination technique (CT, MRI) has improved the accuracy of the diagnosis of renal abscess and the prognosis of renal abscess is related to the early and accurate diagnosis (15). In 1996, Siegel proposed for the first time that 3 and 5 cm can be used as a reference standard for surgical intervention of renal abscess (9). After his proposal, many researchers had further studied the relationship between the abscess size and surgical intervention. However, no definite consensus of the proper treatment has been reached, especially for the size of 3~5 cm (3,6-8,16). Nevertheless, consensus on the use of antibiotics for renal abscess, an infectious disease, has been unanimously reached.

Recently, Gram-negative bacteria gradually replaced Staphylococcus aureus and became the main pathogenic bacteria of renal abscess due to the use of antibiotic (2,11). In a study conducted by Yamamichi et al., E. coli was responsible for 23% of renal abscesses (17). Although there were some negative results, our study also found that Gram-negative bacteria was the main causative organism. In the meanwhile, some scholars found that the increase of RDW to some extent indicates the severity and mortality of Gram-negative bacteria diseases (12). In view of this point, we speculated whether initial RDW can be used to indicate the severity of renal abscess and guide surgical intervention. In our study, the median value of initial RDW in all patients was 13.62%, with 13.15% in conservative treatment group and 14.20% in invasive treatment group. Compared with the conservative group, patients receiving surgical intervention appeared to have higher initial RDW values. After excluding other factors through multivariate analysis, it was found that RDW was still the influential factor that may influence the choice of surgical intervention for renal abscess. This may be attributed to the changes of the predominant pathogens of renal abscess. To our knowledge, for the first time, the increase of initial RDW has been considered as an influential factor that guiding the treatment of renal abscess.

Although the patients of renal abscess receiving surgical intervention with higher initial RDW was found for the first time in our study, its concrete pathophysiologic mechanism is still unknown, the role of RDW in predicting severity and mortality in patients with Gram-negative bacteremia may be one explanation. It has been generally established that, Gram-negative bacteria can cause systemic inflammation which can influence bone marrow function and iron metabolism (18,19), thus lead to the suppression of erythrocyte maturation. When inflammation is severe, even sepsis, the newer and larger reticulocytes are allowed to enter the circulation, consequently cause the increase of RDW (20,21), which may explain why RDW was higher in patients with renal abscess who needed invasive treatment. Oxidative stress may also one reason for the elevated RDW (22,23). To sum up, higher initial RDW value may represent a higher severity of renal abscess and a greater likelihood of the need of invasive treatment.

In additional to RDW, the difference was also found in diabetes mellitus (P value 0.008). In our study, diabetes mellitus occurred in 42.11% of patients, with the ratio of 20.0% in conservative treatment group and 66.67% in surgical intervention group. Diabetes can increase the risk of infection and control difficulty (24). This may be one of the reasons why renal abscess patients with diabetes received more surgical intervention. Research by Ko et al. may also explain this phenomenon (25).

Some studies also reported that the poor prognosis and high mortality of renal abscess are related to some other factors such as advanced age, higher C-reactive protein levels and blood urea nitrogen, occurrence of lethargy (6,26). In our study, the mean age was 48.87±15.89 years, the ratio of female was 63.16%. Although the youngest renal abscess patient was reported to be only 6 months old (27), no pediatric patient was included. In our study, the average value of PLT was 285.08±129.44, with patients receiving invasive treatment had higher value which was contrary to the outcome of poor prognosis indicated by thrombocytopenia (3). This may be related to the bias of subjective choice in clinical work.

In addition to the above variables, BUN, PLR, AG and WBC in urine with differences in univariate analysis were excluded in multivariate analysis. Diabetes mellitus, size of renal abscess and RDW were retained in the regression equation and ROC curves were drawn for variables of RDW and size. In general, for patients with RDW >14.07%, abscess size >3.9 cm and diabetes mellitus, surgical intervention should be taken into consideration.

However, there were several limitations to our study. Firstly, there is a certain degree of subjective bias in this retrospective study, especially in the choice of initial treatment. Secondly, the number of cases is limited due to single center study. Since renal abscess is a rare urinary system disease, more cases and multicenter study are needed. Thirdly, some factors such as C-reactive protein, erythrocyte sedimentation rate which were demonstrated to be associated with prognosis were excluded due to incomplete data. Lastly, blood culture was not been discussed for the reason of limited data.

Reporting Checklist: The authors have completed the STROBE reporting checklist. Available at http://dx.doi.org/10.21037/apm-20-2305

Conflicts of Interest: All authors have completed the ICMJE uniform disclosure form (available at http://dx.doi.org/10.21037/apm-20-2305). The authors have no conflicts of interest to declare.

Ethical Statement: The authors are accountable for all aspects of the work in ensuring that questions related to the accuracy or integrity of any part of the work are appropriately investigated and resolved. The study was conducted in accordance with the Declaration of Helsinki (as revised in 2013). The study was approved by institutional board of the Peking University People’s Hospital (2016-010) and informed consent was taken from all individual participants.