Intrahepatic cholangiocarcinoma (ICC) is a malignant disease of the biliary tree and the second most frequent primary hepatic malignancy after hepatocellular carcinoma (HCC), accounting for 10% to 15% of primary liver cancers (1). Although the frequency of ICC is considerably less than HCC, of note, the incidence and cancer-related mortality of ICC have rapidly increased over the last few decades worldwide (2).

Partial hepatectomy is considered the standard curative treatment option for ICC. However, despite advances in surgical modalities, prognosis after tumor resection remains very poor (5-year survival is only 30%), mainly due to the highly malignant biological behavior of ICC, which leads to recurrence early after radical resection (3-6). Previous prospective/retrospective studies have shown that transarterial chemoembolization (TACE) is not only beneficial for patients with intermediate HCC who are not suitable for surgical treatment or local ablation, but also for patients with moderate (tumor size >5 cm) or high risk of HCC after resection Recurrence (single tumor with microvascular invasion; 2 or 3 tumors) (7-9). The basic principle of TACE is that the infusion of cytotoxic agents into the arteries and then embolization of the blood vessels for the tumor will result in strong cytotoxicity and ischemic effects (10). Because HCCs are usually hypervascular, TACE may have anti-tumor effects. However, most ICC lesions are diagnosed with insufficient blood vessels in contrast-enhanced tomography and may exhibit extensive fibrosis, which is often seen at the site of tumor resection. Theoretically, these features may reduce the penetration of the intra-arterial payload into the tumor, thereby reducing the efficacy of TACE on ICC. However, more and more evidences show that TACE can achieve anti-tumor effects in some patients with advanced ICC. A single-center, retrospective cohort study of 155 patients with unresectable ICC reported a significantly longer median overall survival (OS) (12.2 months) in the TACE group than patients in the symptomatic treatment group (11). A recent meta-analysis including a total of 16 articles and 542 patients with unresectable ICC further demonstrated transarterial chemotherapy-based treatments for ICC appeared to confer a survival benefit of 2–7 months compared with systemic therapies (12). Related research also explored the use of TACE as an adjuvant treatment after radical surgery. In a retrospective analysis of 125 ICC patients, it was found that compared with the control group, the survival time of patients receiving TACE treatment was prolonged. The median OS of the adjuvant TACE group was 12 months, while the median OS of surgery was only five months (13). Jeong et al. also found TACE significantly improved the prognosis of patients with HBV-associated ICC (14). However, Wu et al. found that postoperative adjuvant TACE may only prolong the survival time of ICC patients with tumor size ≥5 cm or advanced TNM stage (15). Another recent retrospective cohort of 553 ICC patients also demonstrated that the TACE and non-TACE groups had similar median OS, 1-, 3-, and 5-year OS rates, and 1-, 3-, and 5-year tumor recurrence rates using 1:1 propensity score matching method. The study also found that a stratified analysis based on the TNM seventh staging system showed that adjuvant TACE had no significant difference in OS or recurrence-free survival (RFS) in stage I and II patients, but it seemed to improve prognoses in patients at stages III and IV. In terms of OS and disease recurrence rates, there were no significant differences between TACE and non-TACE groups (16). Thus it can be seen that differences in tumor stage may be the primary drivers of disparities in survival and recurrence. And whether any benefit gain could be achieved for early-stage ICC after hepatectomy with adjuvant TACE remains unclear. To address this issue, we conducted a retrospective cohort study to evaluate the prognosis of postoperative TACE in UICC stage I ICC patients.

We present the following article in accordance with the STROBE reporting checklist (available at http://dx.doi.org/10.21037/apm-20-1337).

The research was conducted in accordance with the Declaration of Helsinki (as revised in 2013). The study was approved by the institutional ethics committee of the Eastern Hepatobiliary Surgery Hospital [K2016001-P002(III)]. The committee waived the need for informed consent (both written and oral) from participants because this was a retrospective observational study, involved no more than minimal risk to the subjects and did not include intentional deception; this waiver does not adversely affect the rights and welfare of the patients.

In this retrospective analysis, we collected 269 patients diagnosed with TNM stage I ICC received surgery in Eastern Hepatobiliary Surgery Hospital from January 2012 to December 2016. All patients in this study underwent R0 resection (liver transplantation excluded). The staging of tumors was determined according to the TNM classification system of the 8th edition. The histological grade of tumor differentiation was assigned by the Edmondson grading system. R0 resection refers to complete resection of all tumors and no tumor cells on the edge of the tumor under microscope. Patients who met the following criteria were enrolled: (I) TNM stage I ICC; (II) liver function of Child-Pugh grade A or B. (III) no evidence of extrahepatic metastasis. (IV) absence of extrahepatic disease. The exclusion criteria are as follows: (I) past or current medical history of other concurrent malignant tumors; (II) recurrent ICC; or (III) radiofrequency ablation (RFA), microwave coagulation therapy (MCT) or cryoablation was performed before surgery. Patients without clinical or imaging follow-up were also excluded from the analysis.

OS and RFS were used as primary endpoints. OS was defined as the interval between hepatectomy and death, or the last date of follow-up program. RFS was defined as the time interval to tumor recurrence after previous hepatectomy or metastasis was diagnosed. Continuous data are expressed as median [interquartile range (IQR)] and compared with Mann-Whitney U test; for comparing categorical variables, Fisher’s exact test or Chi-square test was used. Firstly, clinicopathologic characteristics between patients with and without postoperative TACE were compared. Secondly, Kaplan-Meier survival curves were used to estimate the median, 1-, 3-, and 5-year OS and RFS, while the log-rank test was used to compare differences in survival. The median follow-up time was estimated using the reverse Kaplan-Meier method. Factors were entered into the multivariable Cox proportional hazards regression model using backward stepwise selection with the Akaike information criterion (AIC). Hazard ratios (HRs) and 95% CI were estimated. Statistical analyses were performed using SAS, version 9.4 (SAS Institute Inc), and R version 3.5.2 software packages (http://www.r-project.org/). Two sided P value <0.05 were considered statistically significant.

In this retrospective analysis, we collected 269 patients diagnosed with TNM Stage I ICC received surgery from January 2012 to December 2016. Of the 269 patients included, the median age was 60.0 years (IQR, 51.0–66.0 years) and the majority of patients were male (n=176, 65.4%). Overall, 109 (40.5%) patients were concomitant with HBV infection, and 266 (98.9%) patients had a tumor size of larger than 5cm. Most patients had moderately differentiated tumors (249; 92.6%). Nerve invasion was noted in 18 (6.7%) patients. Postoperative adjuvant TACE was carried out in 35 patients (13.0%). The baseline demographic and clinicopathologic characteristics of patients with and without postoperative TACE were listed in Table 1. The differences in the baseline clinicopathologic features between the TACE group and the non-TACE group were statistically insignificant. 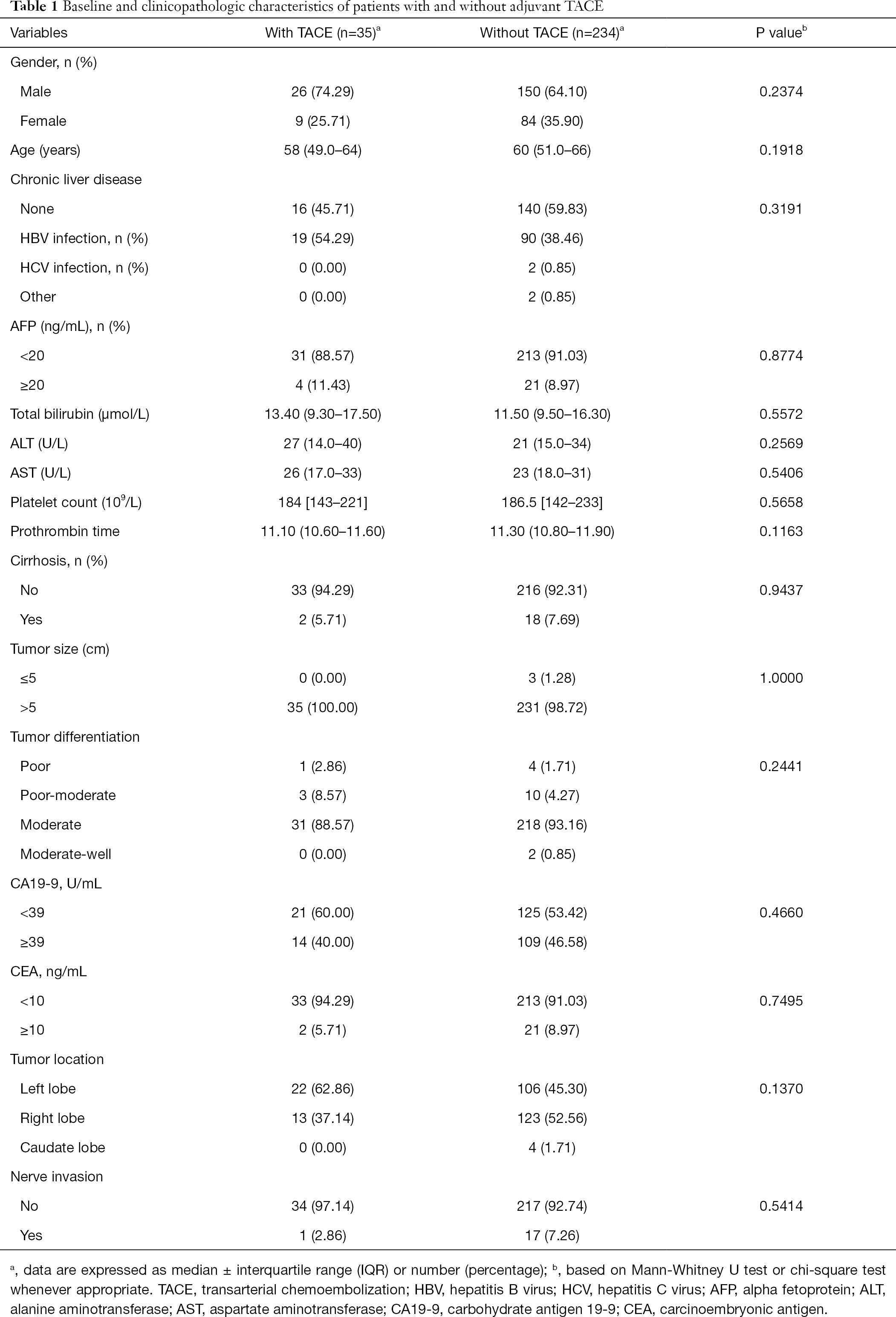 Table 2 Median, 1-, 3-, and 5-year overall survival and recurrence-free survival in all patients and according to with TACE and without TACE groups
Full table 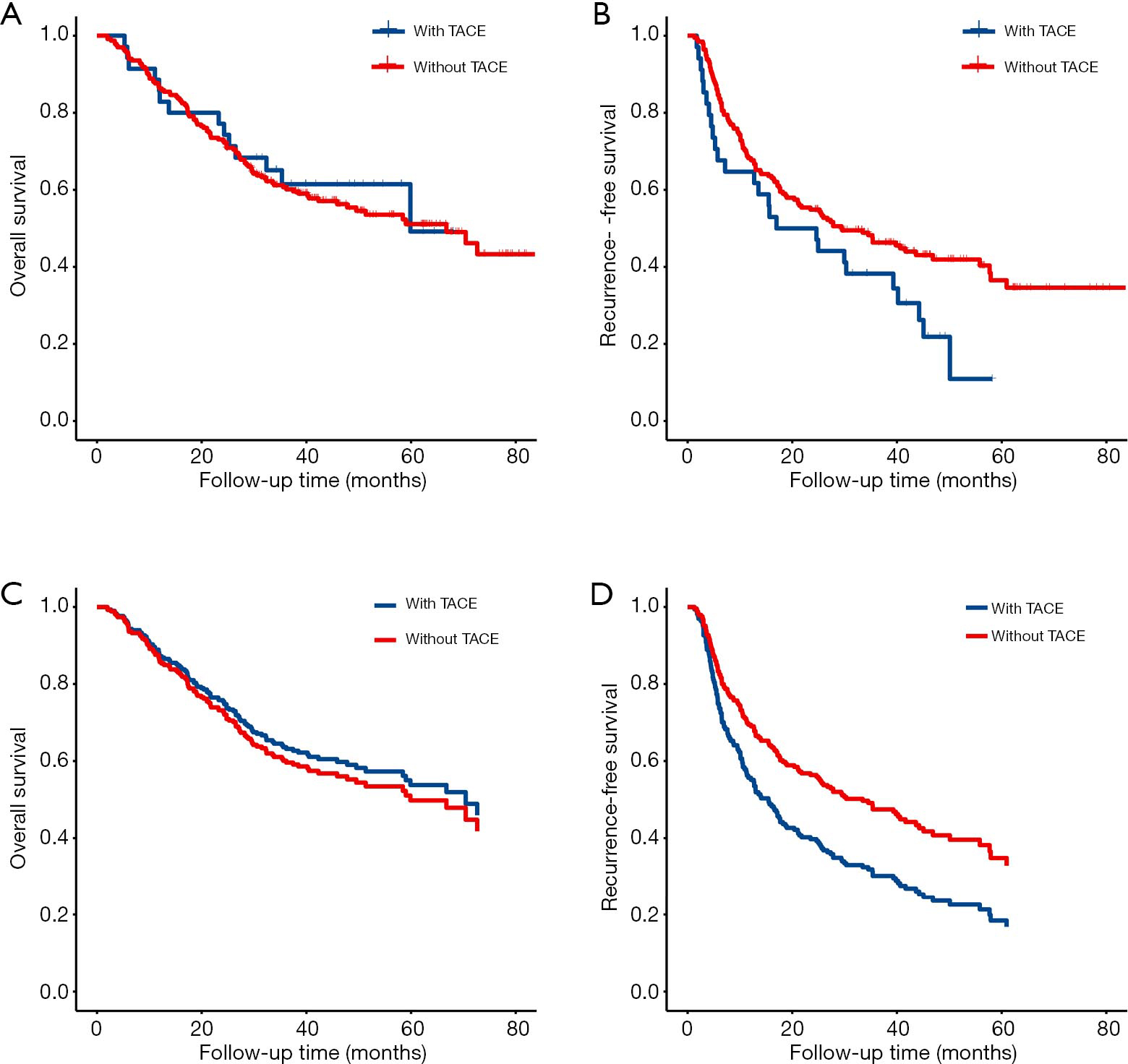 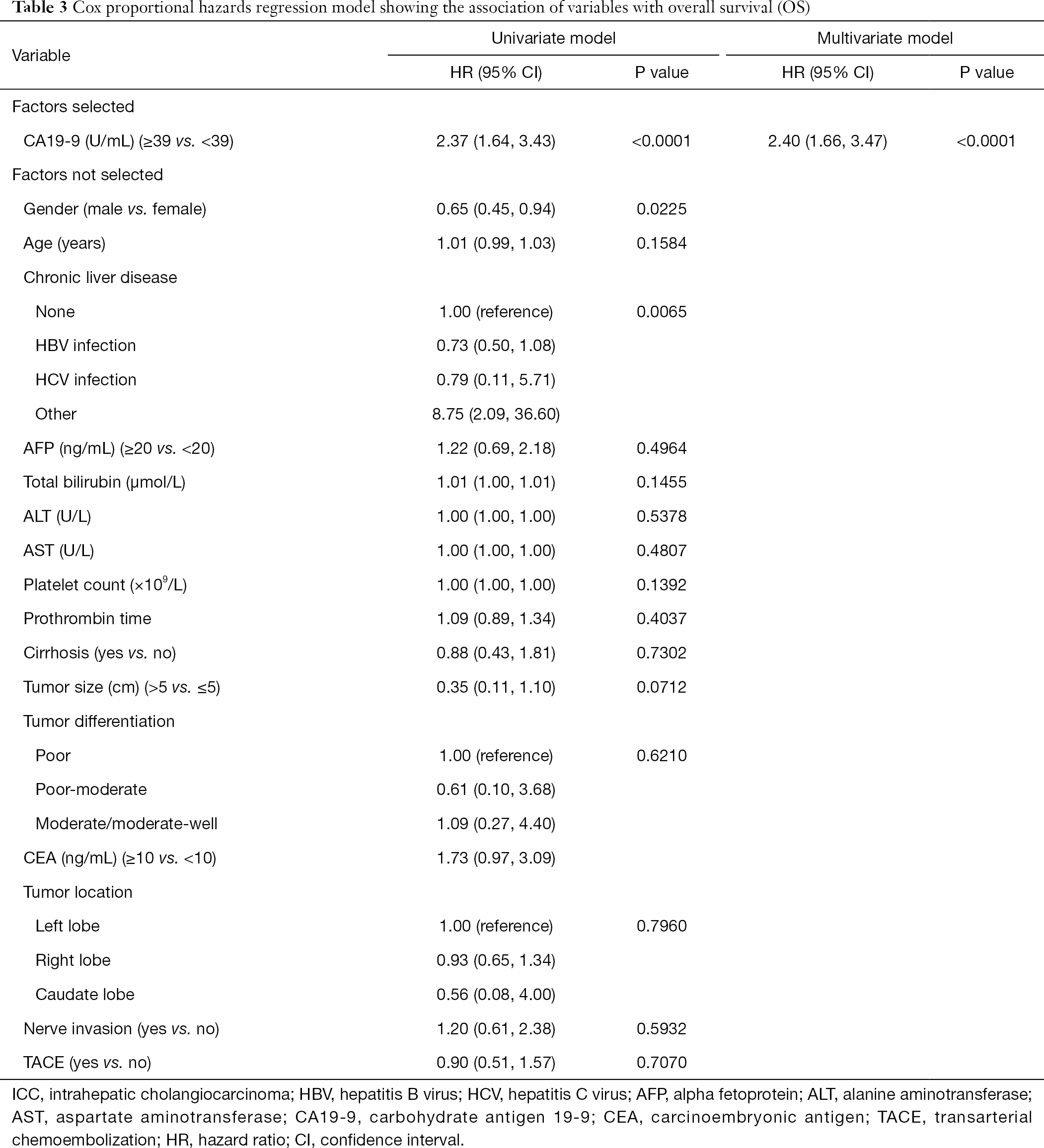 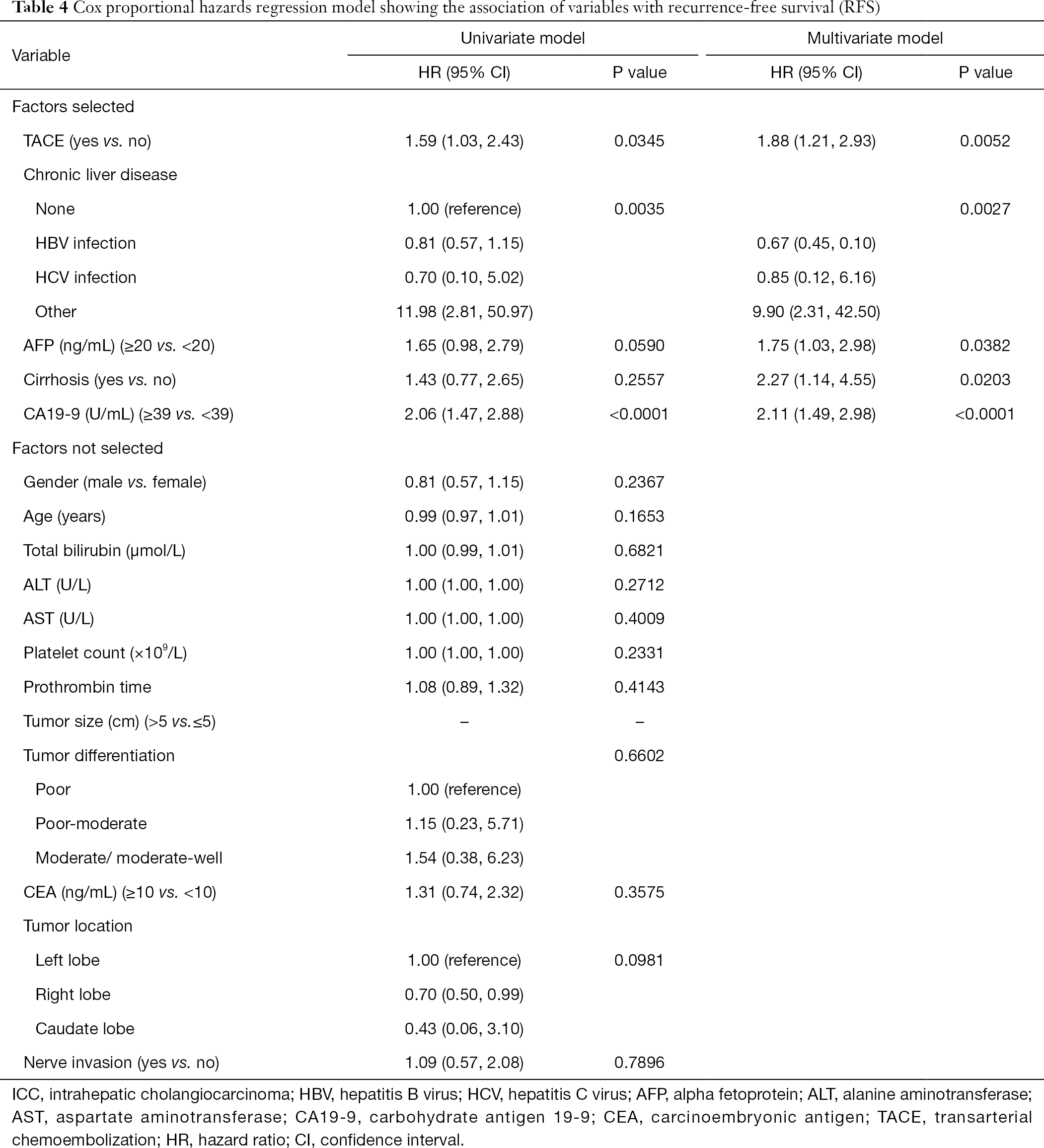 Among primary hepatic malignancies, ICC is the second most prevalent neoplasm after HCC (2), with the age-adjusted incidence increasing from 0.32 per 100,000 to 0.85 per 100,000 between 1975 and 2000 worldwide (17). Despite the progress of local-regional treatment, R0 resection provides the greatest long-term survival opportunity for ICC patients (2). Duo to delayed diagnosis, only 30–40% of patients with ICC (stage 1 and 2; TNM staging) are amenable to surgical resection (18). Unfortunately, even after R0 resection, the recurrence rate of the disease is still high, with some series reporting of 60% and 80% at a median follow-up of 21 months and 5 years, respectively (19,20). ICC is related to shorter survival and lower resectability rates compared to other liver malignancies. Given the high recurrence rates observed in surgically treated ICC, postoperative adjuvant therapy seems to be very necessary. However, its exact role remains to be defined.

In clinical practice, multiple adjuvant and neoadjuvant therapies have been commonly conducted to reduce recurrence and improve the OS (21,22). Among these methods, TACE is regarded as an adjuvant way to prolong the OS after hepatectomy (13,16,23). TACE is an effective adjuvant therapy for HCC patients after hepatectomy. A meta-analysis demonstrated that adjuvant TACE may suppress recurrence and improve survival rates following resection (24). TACE can effectively block the nutrient vessels of the invisible metastatic liver cancer and allowing sustainable chemotherapeutic killing of the microscopic HCC cells (25). Previous studies have shown that adjuvant TACE may benefit selected patients, but the sample size of these studies is small, and the roles of adjuvant TACE in patients with ICC after hepatectomy is still controversial.

Four articles reported the efficacy of adjuvant TACE after resection of ICC. One of the studies showed that adjuvant TACE did not delay disease recurrence, but prolonged OS in patients with early disease recurrence (13). Another study found that TACE can improve the survival rate of patients with ICC >5 cm (15). In a study from Fudan University, 68 patients received postoperative TACE and 143 patients did not (23). Adjuvant TACE may be indicated only for patients at advanced stages for better survival. In another study, 122 patients with adjuvant TACE and 431 patients with R0 resection alone were analyzed (16). The 5-year recurrence rates were significantly lower after adjuvant TACE. Adjuvant TACE was associated with improved OS, the 5-year OS rates with and without TACE were 38% and 30%, respectively. However, after 1:1 PSM, adjuvant TACE was not associated with higher OS or RFS. The results of the present study were consistent with these reports. In our study, of the 269 TNM stage I patients included, all of the patients underwent R0 resection. Adjuvant TACE was carried out in 35 patients. Among all patients, the median OS was 66.8 months, and the 1-, 3-, and 5-year OS rates were 85.9%, 60.8%, and 51.2%, respectively. Moreover, the median OS of patients with TACE was 59.9 months compared to 66.8 months in patients without TACE, which was not significant in univariate analysis (P=0.707).

Our study has some limitations. This is a single-center, small sample-size retrospective cohort study, and the findings may be susceptible to unmeasured confounding. Further research from multicenter, randomized controlled trial with longer follow-up should be conducted in order to verify and extend the results in the present study.

Reporting Checklist: The authors have completed the STROBE reporting checklist. Available at http://dx.doi.org/10.21037/apm-20-1337

Conflicts of Interest: All authors have completed the ICMJE uniform disclosure form (available at http://dx.doi.org/10.21037/apm-20-1337). The authors have no conflicts of interest to declare.

Ethical Statement: The authors are accountable for all aspects of the work in ensuring that questions related to the accuracy or integrity of any part of the work are appropriately investigated and resolved. The study was conducted in accordance with the Declaration of Helsinki (as revised in 2013). The study was approved by the institutional ethics committee of the Eastern Hepatobiliary Surgery Hospital. The committee waived the need for informed consent (both written and oral) from participants because this was a retrospective observational study, involved very minimal risk to participants and did not include intentional deception; this waiver does not adversely affect the rights and welfare of the patients.