Survival differences between chemotherapy and chemoradiotherapy in metastatic esophageal cancer: a propensity score-matched study based on the SEER database

Esophageal cancer (EC) is the ninth most common type of cancer (1), and is comprised of two main pathological types namely, esophageal adenocarcinoma (EAC) and esophageal squamous cell carcinoma (ESCC). EC has a complex lymphogenous hematological pathway that leads to distant metastasis and cancer-related death (2). At the time of initial diagnosis, cancer in 35–50% of patients had metastasized to distant lymph nodes or organs (1,3,4). Tanaka et al. reported that the 5-year relative survival of metastatic esophageal cancer (mEC) was less than 5% and only 11.2% of patients could survive for more than 2 years (5).

Chemotherapy (CT) and chemoradiotherapy (CRT) play major roles in palliative therapy and are currently the primary modes of treatment for mEC (6,7). However, it is not clear whether there is a survival difference between CT and CRT in the treatment of mEC. Further research is needed to explore better treatment strategies for mEC. The aim of this study was to compare the OS and CSS of mEC patients who underwent CT or CRT and select the subgroups which benefit more from CT or CRT based on the Surveillance, Epidemiology, and End Results (SEER) database. We present the following article in accordance with the STROBE reporting checklist (available at http://dx.doi.org/10.21037/apm-20-2126).

All patients in the current study were obtained from the SEER database (http://seer.cancer.gov/). The SEER cancer data represent a large portion of the American population (30%), covering 18 population-based registries. Relevant information of patients was retrieved through the SEER*Stat software (Version 8.3.6). The study was conducted in accordance with the Declaration of Helsinki (as revised in 2013). All data were extracted from the public database and did not involve personally identifiable information, so informed consent was not required.

Primary EC was selected using the International Classification of Diseases for Oncology (ICD-O-3) codes 150 to 155 and 158 to 159. Adenocarcinoma and squamous cell carcinoma were respectively identified as 8140–8389 and 8050–8089. The upper esophagus codes were defined as the combination of C15.0 (cervical esophagus) and C15.3 (the upper third of the esophagus); the middle esophagus code was C15.4; the lower esophagus codes were C15.2 (abdominal esophagus) and C15.5 (lower esophagus). The marital status of every patient was redefined as either partnered (domestic partner or married) or un-partnered (divorced, separated, single, or widowed). The OS referred to the interval from initial diagnosis to death, regardless of the cause. CSS was defined as the period from diagnosis to death associated with EC.

The inclusion and exclusion criteria of this study are summarized in Figure 1. The inclusion criteria included: primary EC patients aged over 18 years and diagnosed with EC between January 2010 and December 2016. The exclusion criteria included: (I) cases with unknown or negative metastatic status; (II) cases without pathological diagnosis; (III) cases that received surgery or were unclear; (IV) cases without radiotherapy and CT data; (V) cases whose survival time was either missing or 0; (VI) cases who received radiotherapy alone or did not undergo any other treatment; (VII) cases with other pathological types, other than ESCC and EAC. 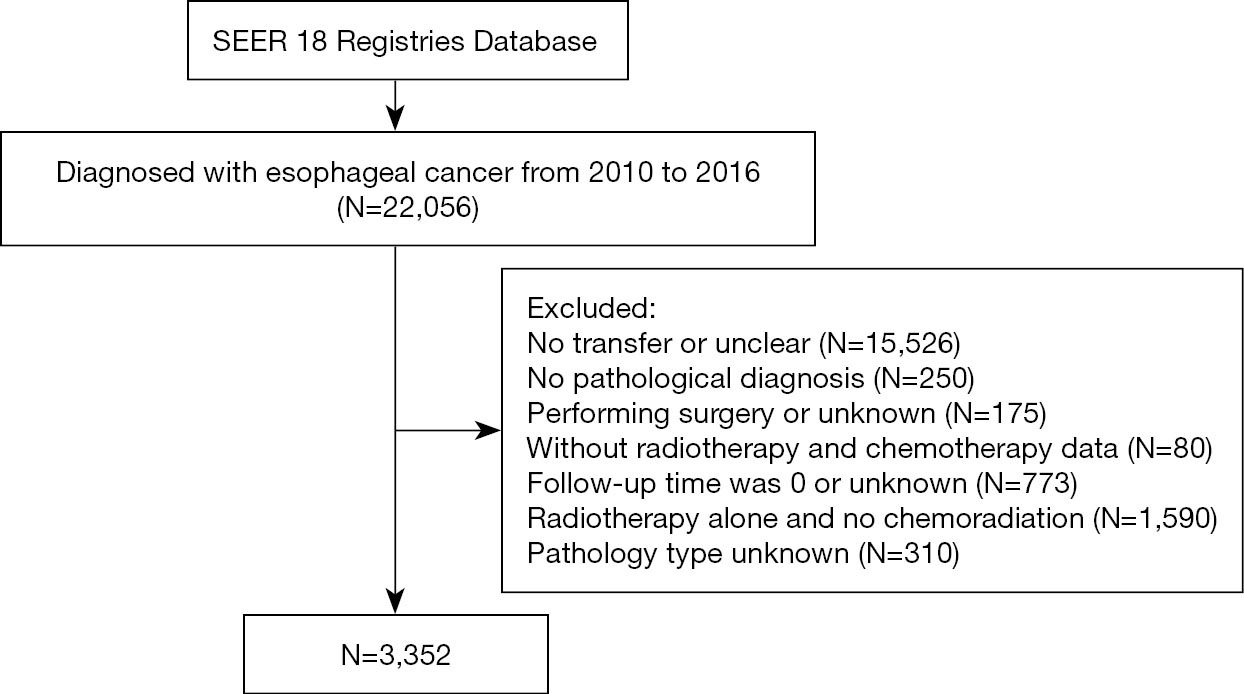 Figure 1 The flow diagram of the selection process for the study.

To minimize possible selection bias, a 1:1 propensity score matching (PSM) was implemented between patients with CT or CRT using the nearest neighbor matching algorithm and a caliper of 0.05 based on the R package MatchIt (Figure S1). Independent variables were selected into the propensity model, including age, gender, pathological type, marital status, race, grade and tumor location. The chi-square test was used to evaluate all variables between two groups, represented as numbers and percentages.

We performed multivariable Cox proportional hazards regression analysis to account for potential confounders and screen prognosis-related factors, which were expressed as the adjusted hazard ratio (HR) and 95% confidence interval (CI). Independent prognostic factors were included in subgroup analysis. Moreover, interaction tests were performed to explore whether any survival benefit conferred by treatment varied across subgroups. The survival estimates were obtained using the Kaplan-Meier method and compared using the log-rank test. Moreover, interaction tests and survival analyses were used to examine the survival benefits of different subgroups in different treatment modes. Statistical significance threshold was set at 0.05. Statistical analyses were performed using the R software (version 3.3.4; http://www.r-project.org/).

All characteristics between the CT and CRT groups were matched by PSM at a 1:1 ratio. The histograms of propensity scores for patients stratified by therapeutic strategies are shown in Figure S1. Finally, 1,431 patients were enrolled in both groups. Before matching, there were significant differences in race, pathological type and tumor location between the two groups. Patients who underwent CRT were mainly non-whites and had a higher proportion of ESCC, but were less likely to have a lower tumor location (all P<0.05, Table 1). After matching, no significant difference was revealed in residual factors between both groups (P>0.05), except for tumor location (P<0.001). 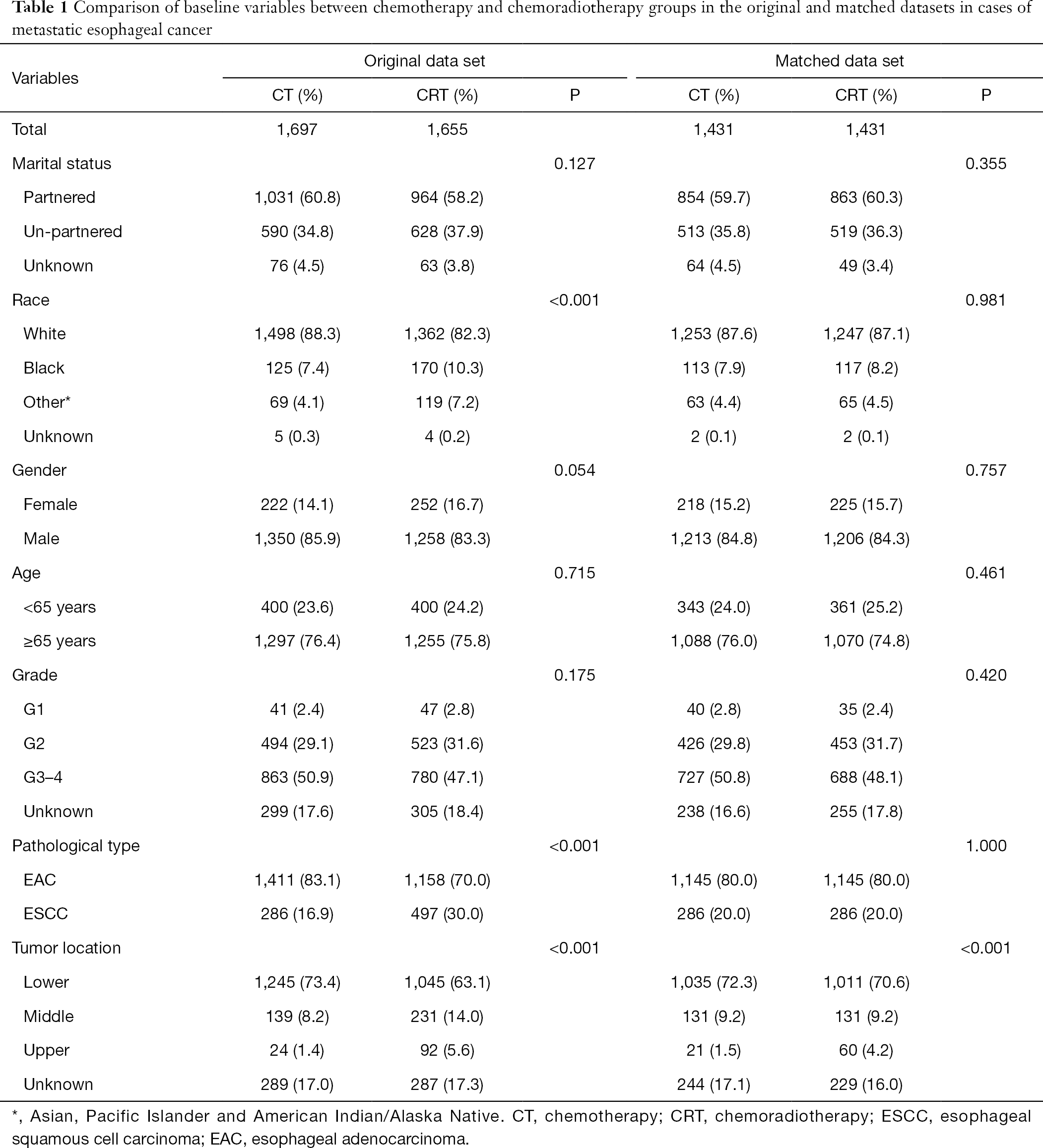 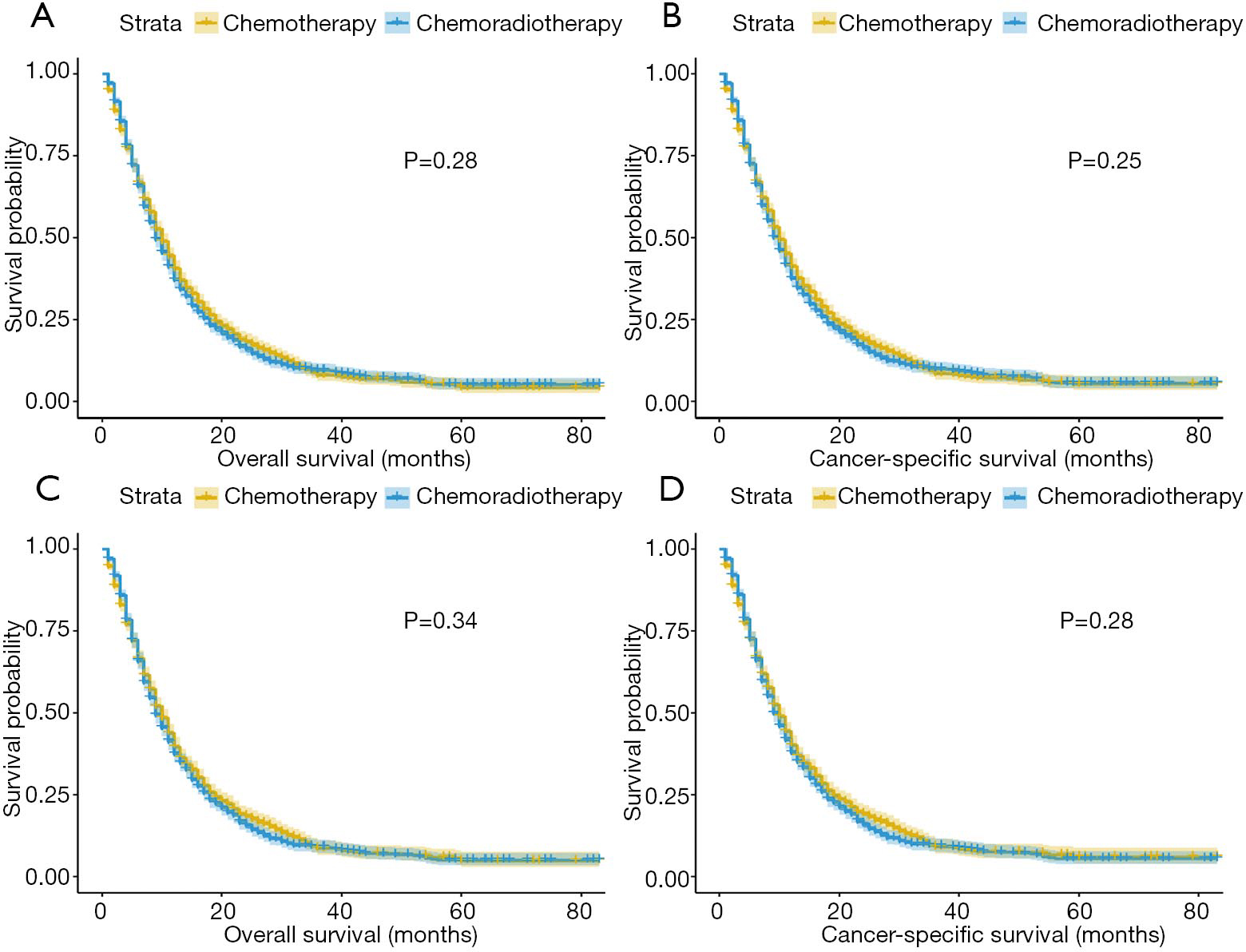 The results of multivariate Cox regression analyses for cohorts before and after matched are shown in Table 2. Multivariable analyses indicated that un-partnered, male and ESCC were significantly correlated with worse OS and CSS before and after matching (all P<0.05, Table 2). However, in the original model, CRT group displayed no significant differences in OS (HR =1.02; 95% CI, 0.94–1.11; P=0.584) and CSS (HR =1.03; 95% CI, 0.94–1.11; P=0.542) compared with the CT group. Similar results were observed in the PSM Cox regression model. Other factors were not associated with the prognosis of mEC patients (all P>0.05). 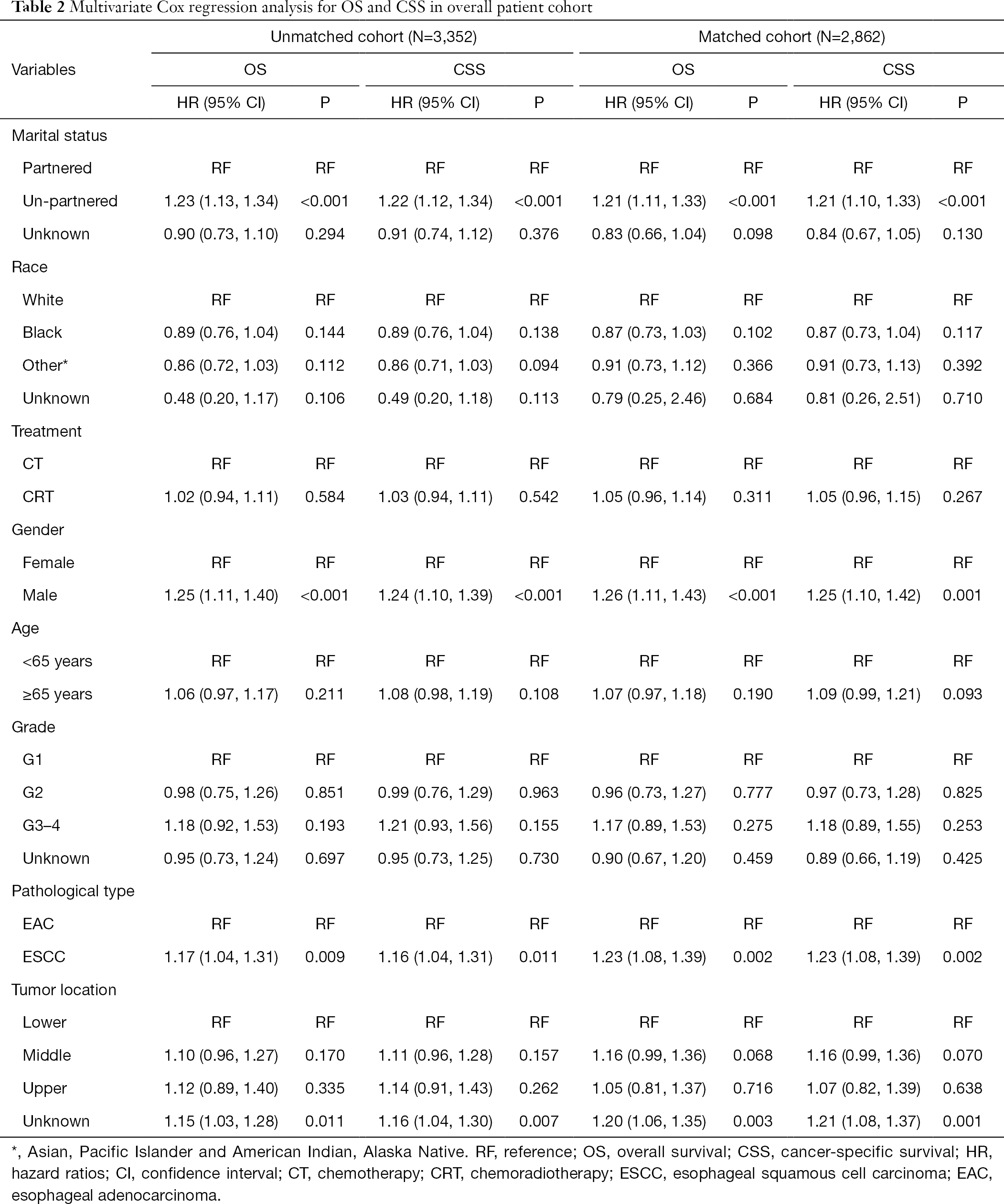 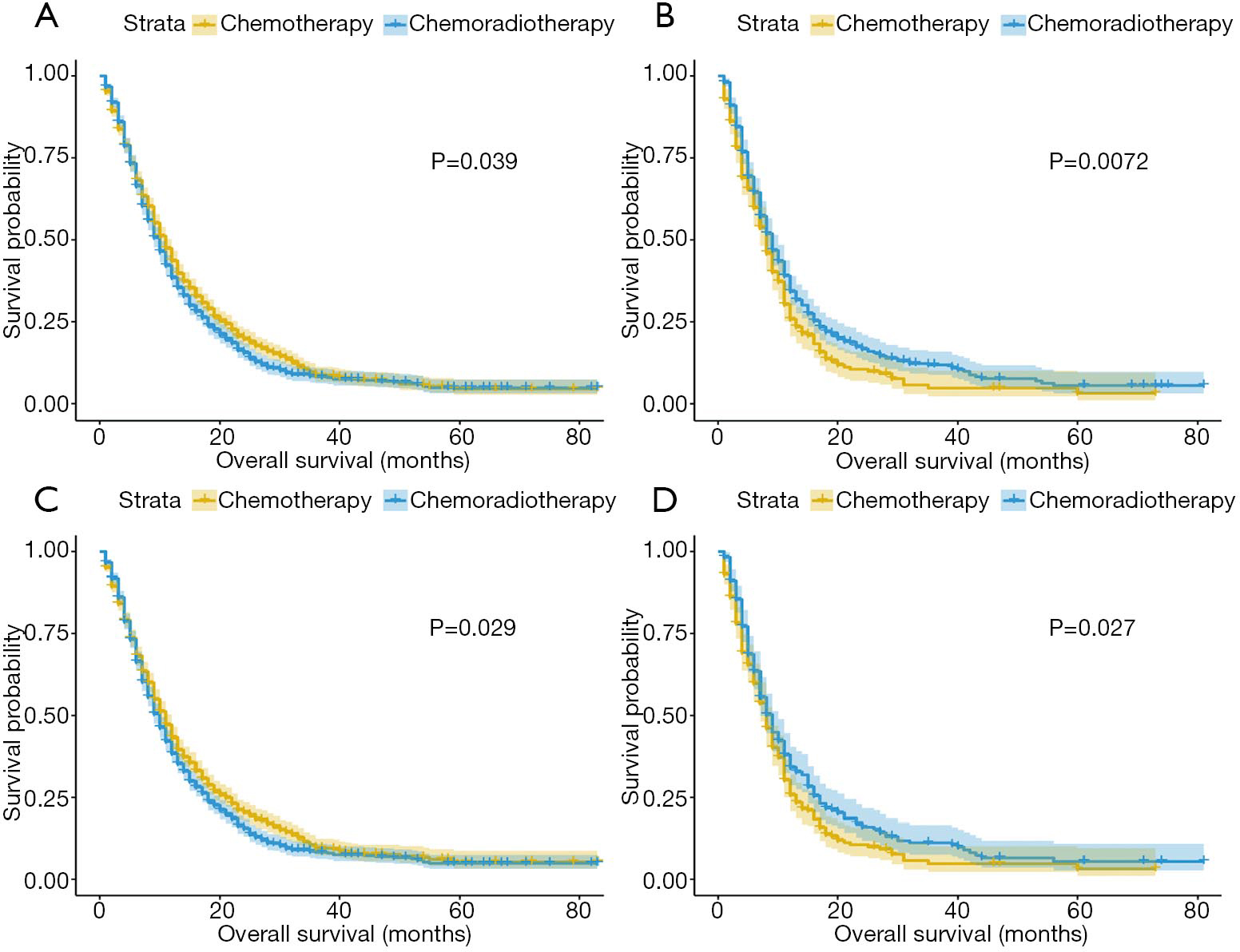 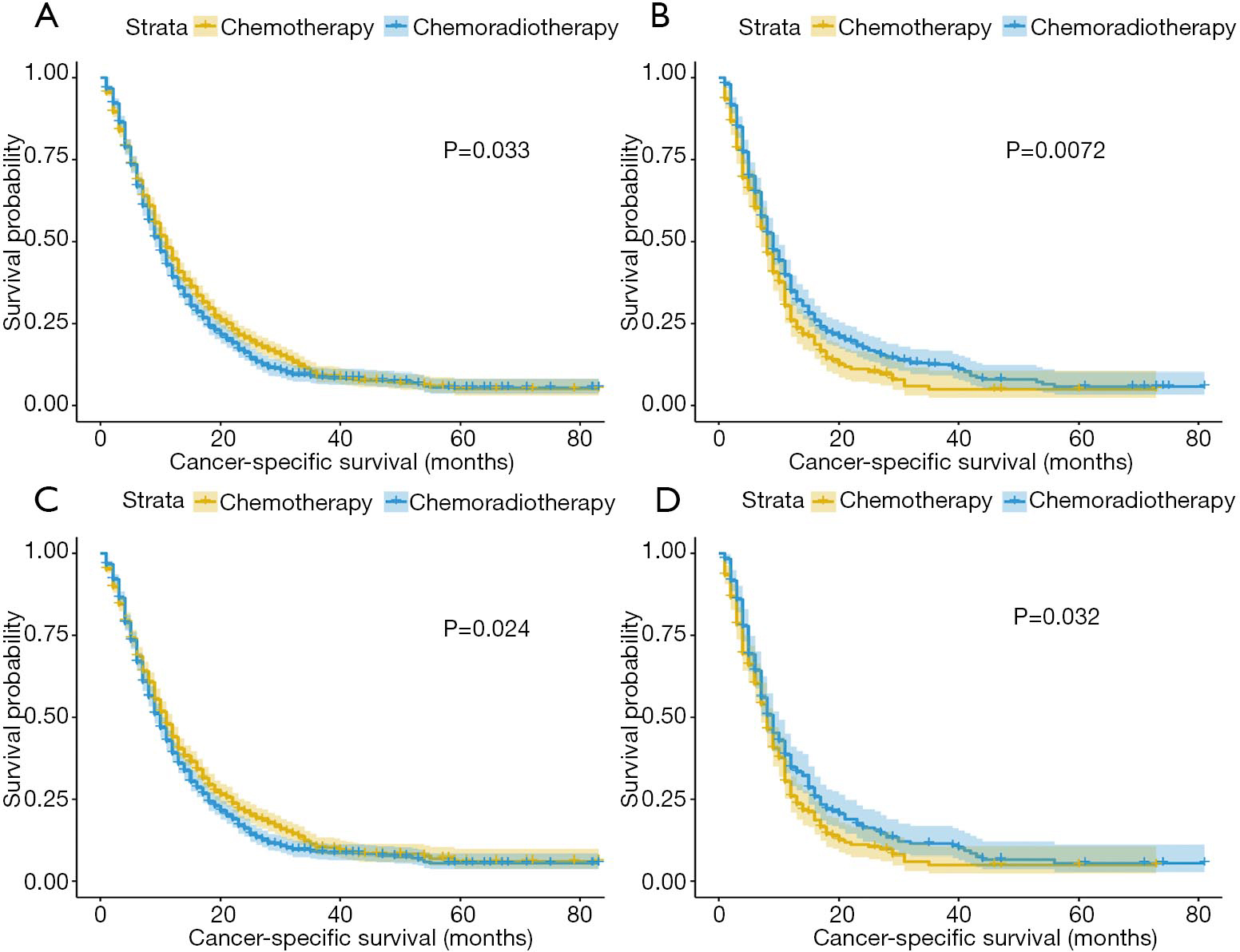 This study demonstrated that ESCC patients who underwent CRT had better OS and CSS compared with those receiving CT. In contrast to CRT, perioperative CT improves OS and CSS for EAC patients. In addition, we identified un-partnered, male and ESCC are independent risk factors for mEC.

Although the treatment regimens for mEC have undergone drastic changes, the standard treatment is yet to be optimized. According to the treatment guidelines in the west, CRT is an acceptable treatment for unresectable mEC (8,9). Tanaka et al. (5) suggested that multimodality therapy, which included CT, radiotherapy and surgery, could improve the outcome in patients with ESCC with distant organ metastasis compared with single-modality. However, mEC is until now not generally treated with a multimodality approach. Guidelines for the National Comprehensive Cancer Network (NCCN) recommend CT as the preferred treatment for mEC patients (9). Notably, our research showed that there were no significant differences in OS and CSS between CT and CRT groups before and after PSM.

In recent years, researchers have found that EC is a heterogeneous cancer with distinct subtypes (10,11). However, most previous therapies have been developed to treat all subtypes of EC. Specific treatment options based on biology of cancer is important for improving outcomes for patients with advanced EC (12). Related biomarkers may help to further personalize radiotherapy and chemotherapy choices (13). Our analysis revealed that the pathological type is potential marker that can distinguish treatment options, hence can prolong life expectancy. Previous studies revealed that ESCC was more sensitive to radiotherapy (14,15), and patients with ESCC has a higher rate of pathological complete response to CRT (16). Normal cells undergo DNA repair through G1/S phase arrest after radiation, and the key gene in this process is wild-type TP53 (17,18). However, multiple studies have confirmed that the high mutation rate of TP53 in patients with ESCC (19,20). Therefore, ESCC is more sensitive to radiotherapy. Steins et al. (21) reported that CRT may contribute to resistant metastatic disease in EAC patients by inducing epithelial-to-mesenchymal transition. CRT may lead to more radiation-related complications, such as pneumonia, acute respiratory distress syndrome, anastomotic leakage, and cardiac complications (22-24), which could present an additional risk. In addition, previous studies had revealed that CRT had more costs compared with CT alone (25). That may be important reasons why CT alone is more suitable for metastatic EAC.

In line with previous studies (26-30), we also found that marital status, gender and pathological type were associated with prognosis of mEC. Marital status plays a significant role in the prognosis of various cancers (31,32). Patients with severe illness are less likely to get married and have a higher risk of divorce (33). Better health-related support from a partner may contribute to better prognosis.

Our study had some limitations that should be taken into account. The EC data in this paper were all from the publicly accessible SEER database, so we could not control the quality of the original data. Besides, the SEER database lacks information on radiation dose, quality of life, immunotherapy and recurrence data, which may affect our results. As far as we know, this is the first study to explore whether survival differences existed between patients with mEC undergoing CT and CRT. This study is a retrospective, non-randomized analysis that needs further research for verification.

We find that CT-receiving EAC patients have favorable OS and CSS. However, patients undergoing CT have worse CSS and OS compared with patients who have CRT in the ESCC subgroup. We recommend that as further efforts are made to improve the prognosis of patients with mEC, treatment plans should be tailored to the biological characteristics of an individual’s cancer.

Funding: This work was supported by the Health Bureau of Chongqing (20121015) and Chongqing Medical University Scholarship Fund for Development of Young Talents (XRJH201905).

Reporting Checklist: The authors have completed the STROBE reporting checklist. Available at http://dx.doi.org/10.21037/apm-20-2126

Conflicts of Interest: All authors have completed the ICMJE uniform disclosure form (available at http://dx.doi.org/10.21037/apm-20-2126). The authors have no conflicts of interest to declare.

Ethical Statement: The authors are accountable for all aspects of the work in ensuring that questions related to the accuracy or integrity of any part of the work are appropriately investigated and resolved. The study was conducted in accordance with the Declaration of Helsinki (as revised in 2013). Demographic and clinicopathological data extracted from SEER database, and all data included are anonymous. This study has been approved to be exempted research for no human subject involved by the Ethics Committee of the First Affiliated Hospital of Chongqing Medical University.