Patients’ understanding of communication about palliative care and health condition in Japanese patients with unresectable or recurrent cancer: a cross-sectional survey

Previous studies reported that patients typically want physicians to provide adequate information that is straightforward and understandable (16). Therefore, this study aimed to examine agreement between patients’ and physicians’ reports of communication about palliative care and current health condition among patients with unresectable/recurrent cancer and explore factors associated with optimistic understanding in Japan.

We present the following article in accordance with the STROBE reporting checklist (available at http://dx.doi.org/10.21037/apm-20-2045).

This study was a cross-sectional, multicenter, observational study in Japan. Between February 2015 and January 2016, patients with unresectable/recurrent solid cancers who were treated at Tohoku University Hospital and Miyagi Cancer Center were included. The researcher checked the medical record and asked physicians to enroll both inpatients and outpatients. Because the number of researchers was limited, we skipped enrollment when we identified several eligible patients on the same day at two hospitals. In addition, although we tried to enroll patients consecutively, however, in the specific periods when the research was not performed due to practical reasons, e.g., unavailability of researchers on certain days of the week, over the weekends or holidays or due to staff rotations, we allowed each institution to skip patient enrollment for the specific periods and the numbers of the patients were recorded. Therefore, patients were enrolled by convenience.

To examine the proportion of agreement between patients’ recollection and physicians’ explanation, we asked patients about palliative care and current health condition.

In addition to survey data, we obtained patient characteristics, including age, sex, type of cancer, name of the primary responsible physician and number of chemotherapy regimens, from medical records. We inquired about patients’ educational level, marital status, family income, European Organization for Research and Treatment of Cancer Quality of Life Questionnaire Core 30 (EORTC QLQ C30) score and communication score [physician communication (18)] via questionnaire. Regarding EORTC QLQ C30 score, we calculated the score based on the EORTC QLQ-C30 scoring manual (19). For communication score, patients were asked following five questions: “How often did your doctors listen carefully to you?”, “How often did your doctors explain things in a way you could understand?”, “How often did your doctors give you as much information as you wanted about your cancer treatments, including potential benefits and side effects?”, “How often did your doctors encourage you to ask all the cancer-related questions you had?” and “How often did your doctors treat you with courtesy and respect?”. Response options for each question were “Always (score 3)”, “Usually (score 2)”, “Sometimes (score 1)” and “Never (score 0)”. We converted the total scores (0–15) to 100-point scales, multiplying by 100/15, with 0 representing the worst possible communication and 100 representing optimal communication. Furthermore, we solicited patients’ Eastern Cooperative Oncology Group performance status (ECOG PS) from the primary responsible physicians.

In addition to survey data, we investigated physicians’ approach to communication in routine clinical situations. Questions about the general approach to communication were asked of each physician only once by the questionnaire during the survey period. Physicians were asked about when they explained the purpose of chemotherapy, prognosis, impossibility of cure, hopes about place to die, palliative care unit, home medical care, and do-not-resuscitate (DNR) orders. Response options were: “Explain immediately”, “Explain when cancer symptoms first appear”, “Explain when there is no treatment other than palliative care”, “Explain when patient is hospitalized for worsening symptoms” and “Explain when patient or their family raises the topic”.

Second, we performed bivariate analysis of patient factors (patient characteristics, EORTC QLQ C30 score and communication score) and physician’s approach. We performed the Wilcoxon rank-sum test for continuous variables, the Cochran-Armitage trend test for ordinal variables and Fisher’s exact test for categorical variables to identify the factors associated with patients in the “Optimistic” group. We considered a P value of <0.05 as significant for a parsimonious model.

Between February 2015 to January 2016, we enrolled 178 patients (114 men and 62 women) in this study [mean (standard deviation) age, 66 (12.2) years]. The characteristics of these patients are shown in Table 1. Between study recruitment, the responsible researcher was transferred to another hospital. The consequent inability to recruit additional patients considerably limited the study sample size compared with the target of 250.

Sixteen physicians with medical oncology backgrounds participated in the survey. Physicians primarily attended to patients with solid cancer, including lung, gastrointestinal, hepatobiliary, head and neck, breast and sarcoma. We did not receive responses from two physicians. 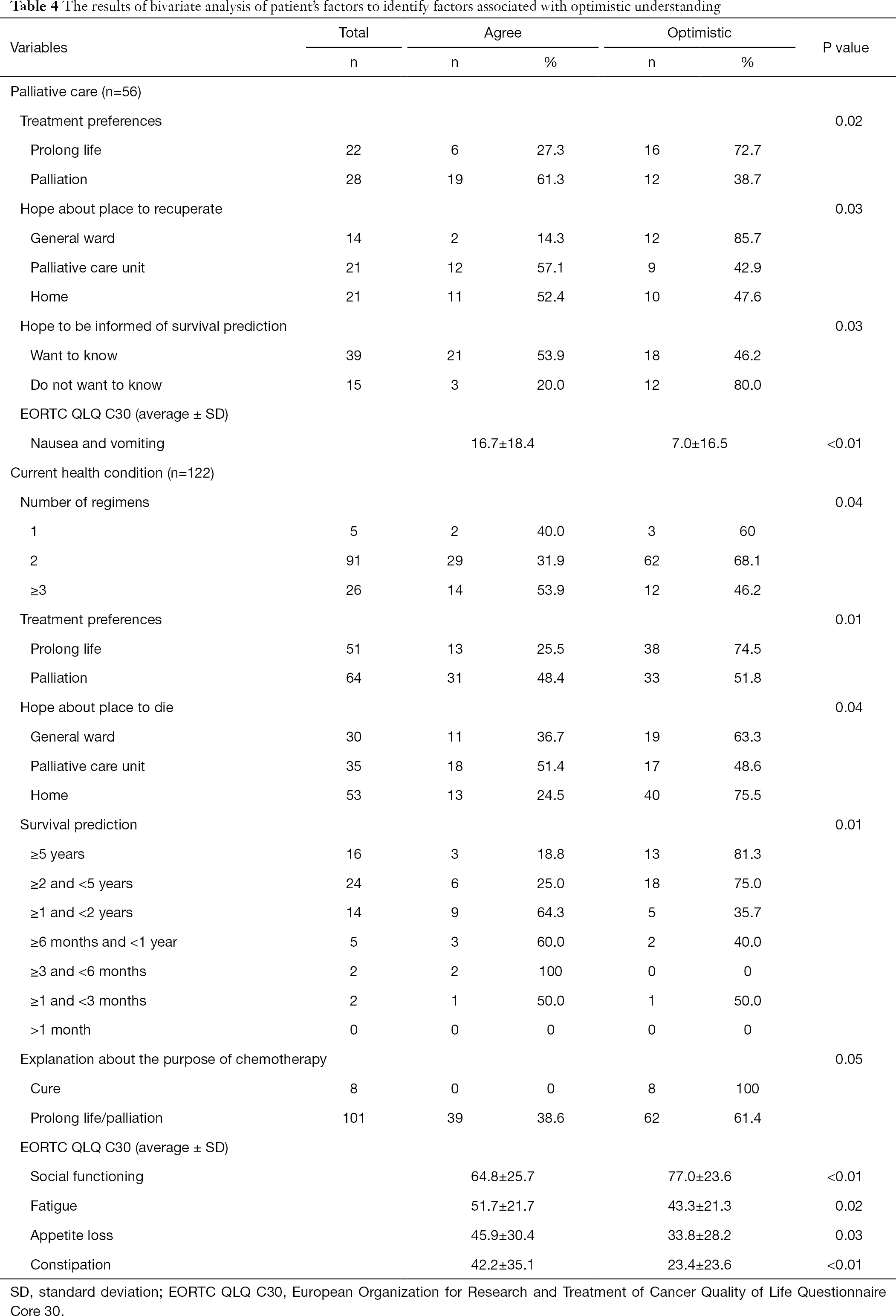 Table 5 shows the results of the univariate analysis of physicians’ factors associated with patients in the “Optimistic” group. Most physicians explained “immediately” about “impossibility of cure”, “when patient and his or her family raises the topic” about “prognosis”, “when there is no treatment other than palliative care” about “palliative care unit and home medical care” and “when hospitalized for worsening symptoms” about “do-not-resuscitate”. However, physicians’ approach about explaining “hope for a place to die” were disparate. Regarding explanation of the purpose of chemotherapy, all physicians answered “explain immediately”. Therefore, the variable was excluded from the analysis. However, no variables had an independent value. 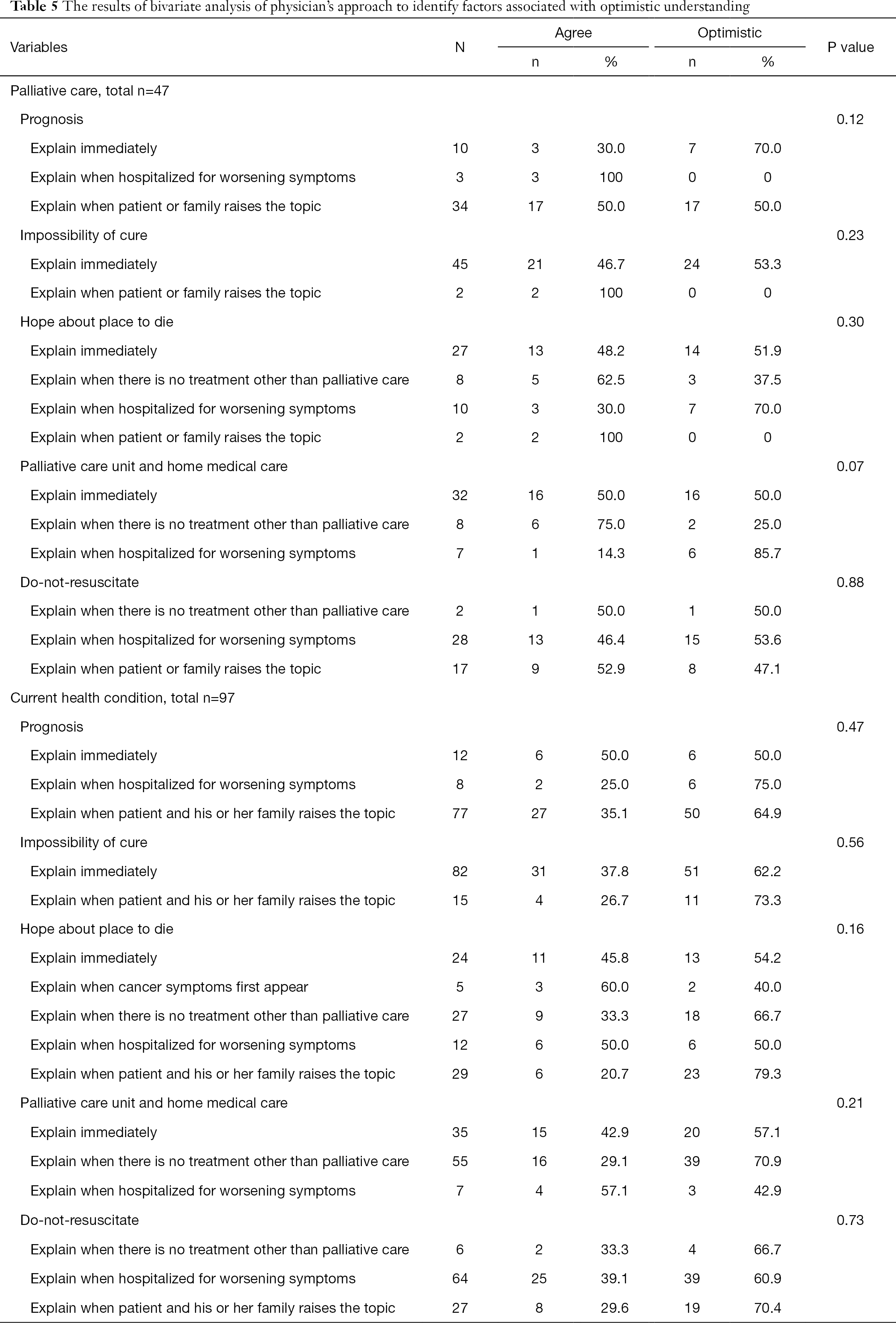 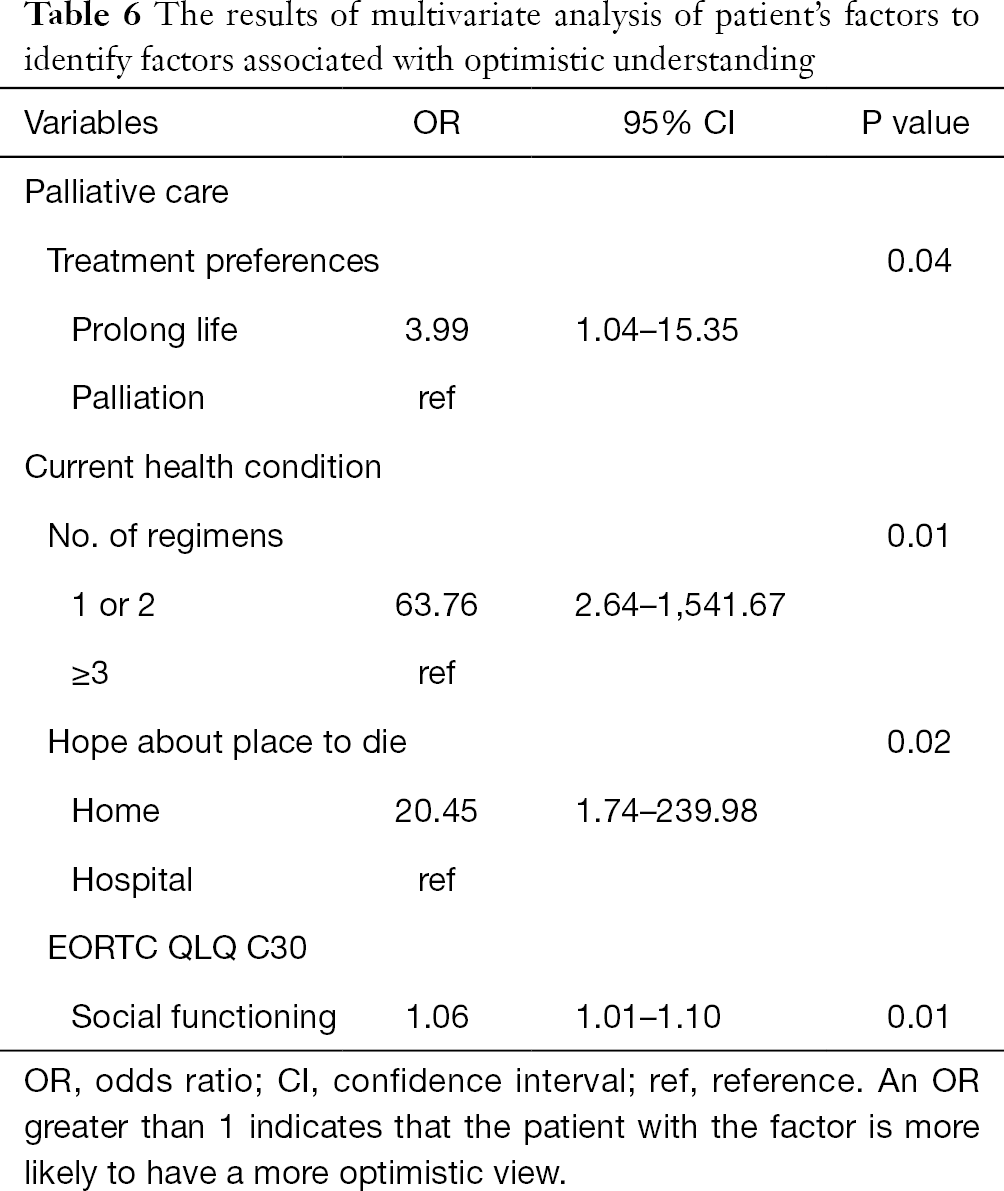 One of the goals of good communication between physicians and patients is to make sure that the patients understand what they are told by physicians. Previous studies have suggested that patients only remember 20% of what they hear in the clinic, and, of that, only remember half of the information correctly; thus, only 10% of everything patients hear is understood and recalled correctly (20). Therefore, the current finding that 30–50% of patients correctly understood the physician's explanation can be considered a relatively high proportion. Based on previous reports, some patients would be expected to hold unrealistic views rather than physicians’ realistic explanations, in order not to lose hope (21); therefore the actual proportion of patients who actually understood their prognosis may have been slightly higher. However, the finding that fewer than 50% of Japanese patients agreed with their physicians suggests that physician-patient communication could be improved. The finding that most patients were more optimistic than physicians’ explanations may also be an obstacle to decision-making according to individuals’ stated goals, values and preferences. A systematic review reported that approximately half of unresectable/recurrent ill cancer patients had accurate prognostic awareness (22). Furthermore, it has been reported that terminally ill cancer patients tend to develop accurate prognostic awareness late in their terminal illness trajectory (23). Therefore, the proportion of agreement might be improved in the late stages of the illness trajectory.

Patients with fewer regimens were more optimistic about their current health status. Although previous studies reported that patients with unresectable/recurrent cancers tend to have excessively optimistic perceptions of their curability (1,5-7), patients with first-line or second-line regimens might tend to have high expectations for chemotherapy. We found that patients who hoped to die at home had more optimistic views about their current health status. A previous study reported that the predictors of preferred home death included better physical health (29). Thus, patients who preferred home death might have perceived their physical health to be better than their actual health. In addition, it has been reported that social functioning scores evaluated by EORTC QLQ C30 were higher in progressive disease (PD) patients after chemotherapy for gastrointestinal cancer in Japan (30). One of the inclusion criteria in the current study was failure of first-line chemotherapy (PD); therefore, social functioning scores tended to be higher. We speculate that patients with higher social functioning scores may have felt that their disease disturbed their daily life and believed that chemotherapy would improve their health to regain their daily lives.

The current study involved several limitations. First, the statistical power was weaker than planned. The proportion of agreement may have been affected by this limitation. Second, this study was conducted in one region in Japan. Our results regarding the proportion of agreement may not be generalizable to other regions of Japan, or other countries. Third, the cross-sectional design did not allow us to determine causality between the proportion of agreement and other factors. Fourth, because we asked patients and doctors about previous communication, recall bias might be present. Although the physician response was considered the gold standard as to whether communication took place, we cannot be sure that physicians actually discussed the information. Fifth, although patients who answered “I don’t know” despite having discussed the topic with their physicians were included in the “Optimistic” group, the patients might have answered “I don’t know” because physicians’ explanation was too vague or indirect. Therefore, the patients might not be optimistic. Sixth, because physicians approached their own patients with the study, and because they could choose which patients were selected, selection bias is a possible limitation. It would have been more appropriate to obtain informed consent by a researcher other than the primary responsible physician and to conduct rigorous consecutive enrollment.

Overall, the results revealed that many Japanese patients with unresectable/recurrent cancer were optimistic about palliative care communication and their health condition relative to physicians’ explanations. Ensuring effective communication is essential for informed decision-making.

We thank Inga T. Lennes, MD, MPH, at Massachusetts General Hospital Cancer Center, Boston, MA, USA for assisting with the backtranslation of the questions used in this survey. We are also deeply grateful to Mrs Yamagishi, RN, of the Department of Palliative Nursing, Tohoku University Graduate School of Medicine, Miyagi, Japan for participant recruitment and data collection. We thank Benjamin Knight, MSc., from Edanz Group () for editing a draft of this manuscript.

Reporting Checklist: The authors have completed the STROBE reporting checklist. Available at http://dx.doi.org/10.21037/apm-20-2045

Conflicts of Interest: All authors have completed the ICMJE uniform disclosure form (available at http://dx.doi.org/10.21037/apm-20-2045). Dr. Mitsunori Miyashita serves as an unpaid editorial board member of Annals of Palliative Medicine from Jul 2019 to Jun 2021. The other authors have no conflicts of interest to declare.

Ethical Statement: The authors are accountable for all aspects of the work in ensuring that questions related to the accuracy or integrity of any part of the work are appropriately investigated and resolved. The study was conducted in accordance with the Declaration of Helsinki (as revised in 2013). The primary responsible physicians obtained written informed consent from all patients in both Tohoku University Hospital and Miyagi Cancer Center. The independent ethics committee of Tohoku University School of Medicine (approval no. 2014-1-085) and Miyagi Cancer Center (approval no. 2014-010) approved this study.