Renal cell carcinoma (RCC) was the most common renal parenchyma malignant that originated from the kidney, accounting for 80–85% of renal tumors and 2–3% of systemic malignant malignancies (1). According to statistics, the number of newly diagnosed cases of RCC worldwide in 2018 was 403,262, and the number of deaths were approximately 175,100 (2). Due to the lack of reliable diagnostic biomarkers and concealed early clinical symptoms of RCC, 20–30% of patients were in the advanced stage at the first visit (3,4). Even after surgical treatment with early-stage RCC, 30% of the patients progressed to metastatic RCC eventually (5,6).

At present, some studies had shown that sex, age, tumor size and other clinicopathological factors may affect the prognosis of patients with RCC. But there were still few studies on independent prognostic factors of lung metastatic RCC (11,12). Therefore, a comprehensive prognostic assessment model incorporating a variety of important demographic and clinicopathological variables was necessary. The nomogram based on the regression coefficients of each variable, combines many important prognostic correlates to more accurately predict individual patient survival rates (13).

We present the following article in accordance with the TRIPOD reporting checklist (available at http://dx.doi.org/10.21037/apm-20-1488). 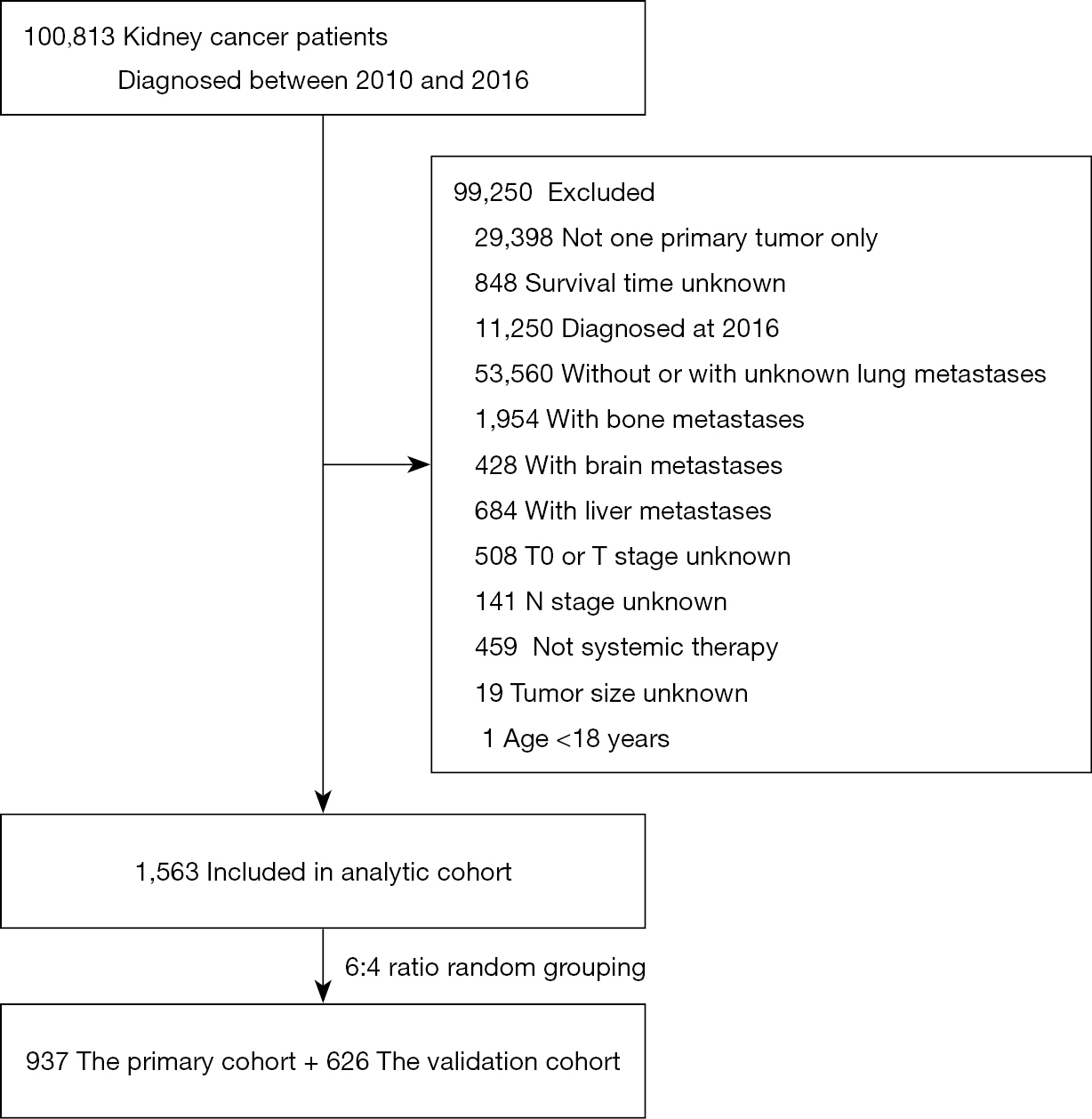 Figure 1 Schematic flowchart of the inclusion and exclusion criteria for this study.

Cases, which were diagnosed after January 1, 2016 were excluded to make sure that all cases had a longer than 1-year survival status observation at the last follow-up in December 2016. Finally, we confirmed the data of 1,563 eligible patients diagnosed with lung metastatic RCC. The study was conducted in accordance with the Declaration of Helsinki (as revised in 2013).

Specific information on age, year of diagnosis, race, sex, tumor T-stage, N-stage, histology, tumor size, chemotherapy, surgery, radiotherapy, survival time and causes of death can be found in the SEER database. The overall survival (OS) time was defined as the time from the date of diagnosis of RCC to the date of death from any cause or the last follow-up visit in December 2016. Deaths from other causes were excluded from the analysis of cancer-specific survival (CSS).

According to the optimal cutoff value generated by the X-tile software (Version 3.6.1), the age was trivially stratified (<65 years, 65–74 years and >74 years; Figure S1). By RStudio software, all patients were randomized in a ratio of 6:4 into a primary cohort and validation cohort. In the entire cohort, Kaplan-Meier curves were used to detect variables related to OS and CSS of lung metastatic RCC and differences between the curves were analyzed by the log-rank test. We used univariate and multivariate Cox models to analyze prognostic factors associated with lung metastasis RCC and to measure hazard ratios (HR) and 95% confidence intervals (CI).

Based on the results of the multivariate Cox proportional hazard regression model, the RStudio software was used to construct prognostic nomograms of RCC patients with lung metastasis to predict the OS and CSS probability of each patient. In addition, the calibration curves and consistency index (C-index) were used to evaluate the predictive performance of the nomograms, and to calibrate the predictive ability of the nomograms for 1-, 2- and 3-year OS and CSS. The value of C-index statistic ranged from 0.5 (non-discrimination) to 1 (perfect discrimination), and a higher value means a better prognostic model. All these assessments were performed by bootstrap with 1,000 resamples. Since there is no direct clinical explanation for the C-index, we analyzed the decision curve analysis (DCA), a new method for evaluating predictive models for net benefit assessment in terms of clinical outcomes (15). SPSS software (version 20.0) and RStudio software (Version 1.2.5033) were used for all statistical analyses. A P value of <0.05 (two-sided) was considered statistically significant. 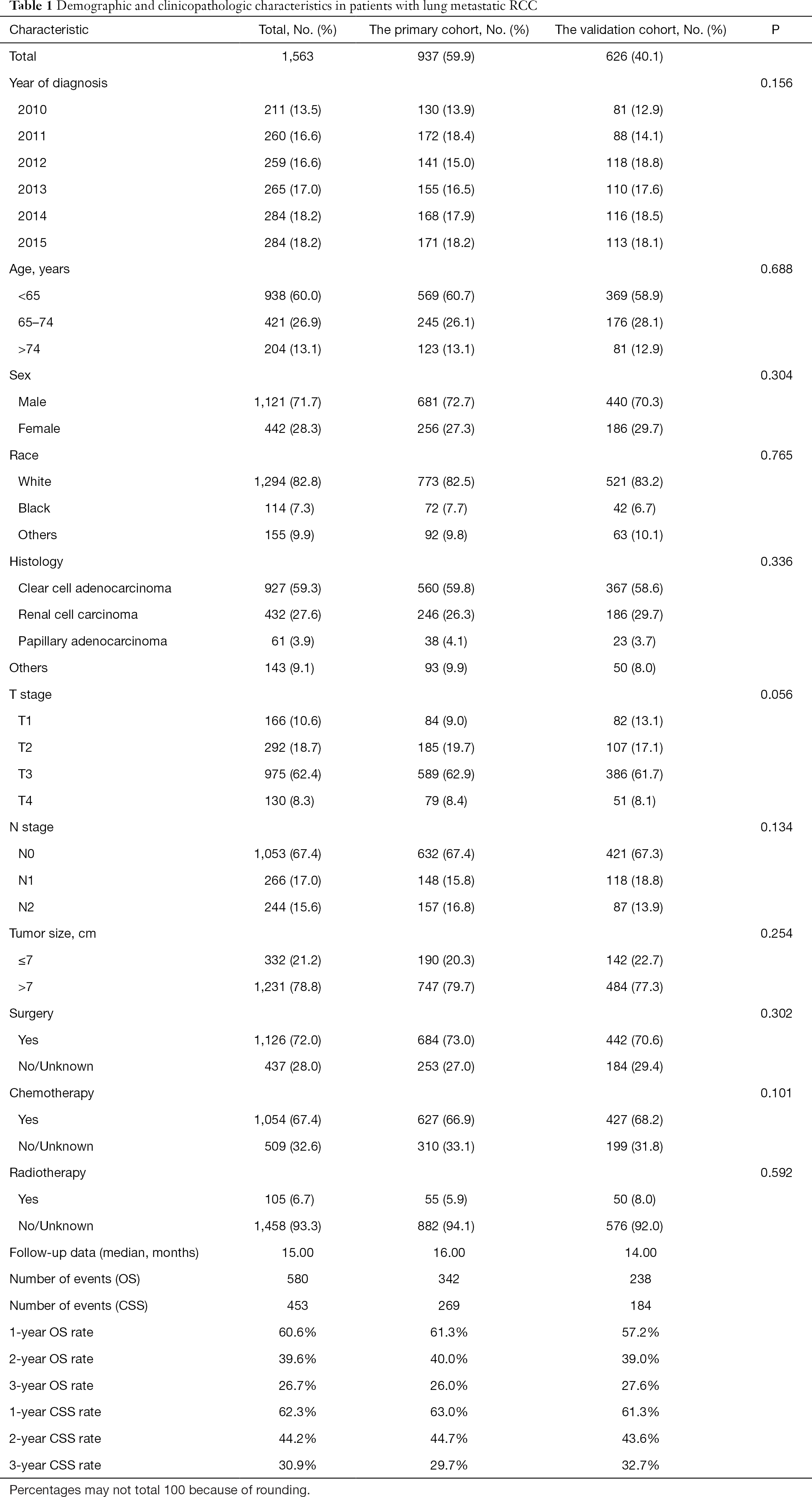 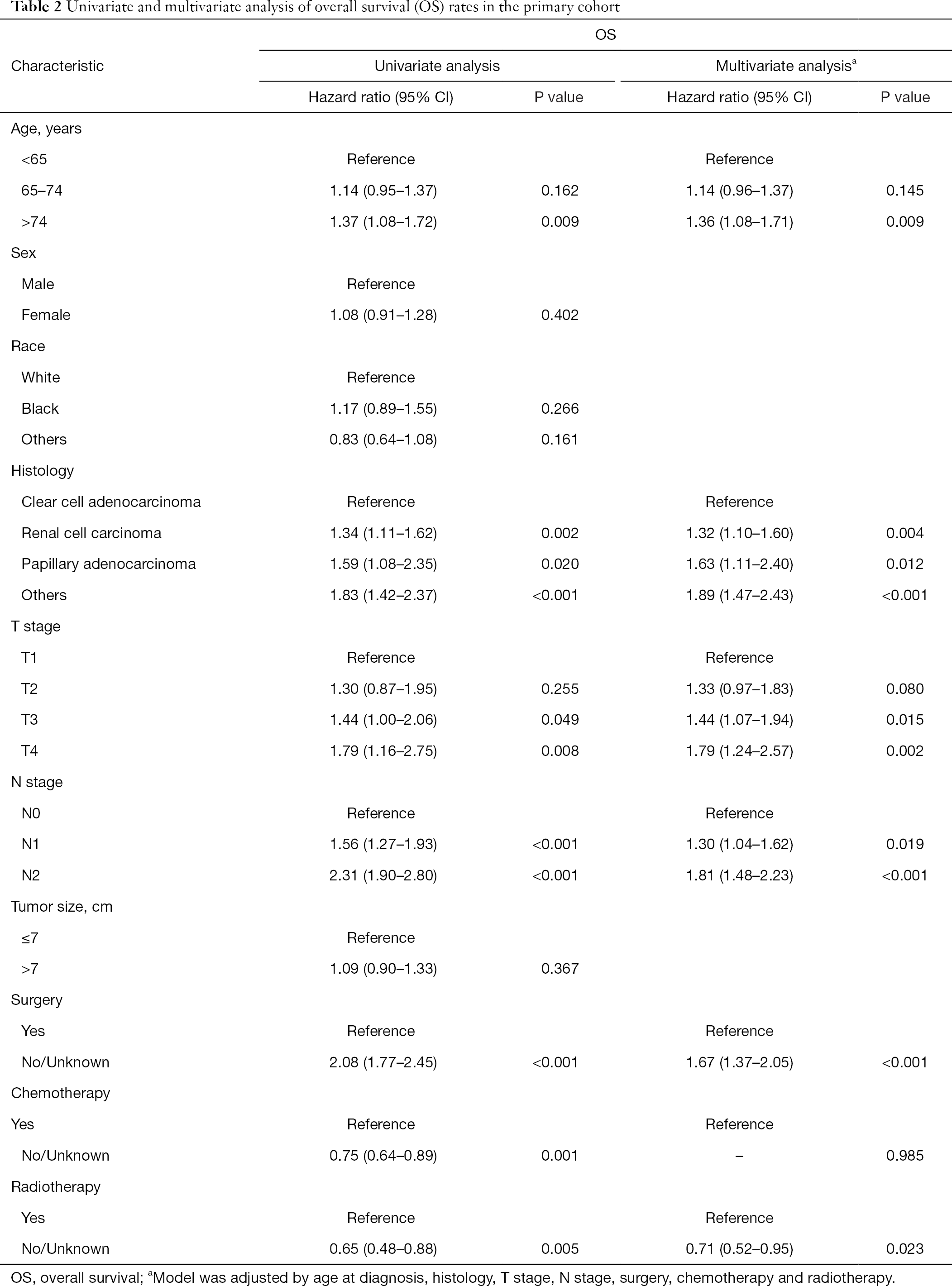 And in terms of CSS, in univariate Cox regression analysis the demographic and clinicopathological factors, which were significantly correlated with CSS were diagnostic age, histology, N-stage, T-stage, surgery, chemotherapy and radiotherapy. All the factors identified above were included in the multivariate Cox proportional hazard regression analysis, indicating that histology, N-stage, T-stage and surgery were independent prognostic factors of RCC with lung metastasis RCC, while age, chemotherapy and radiotherapy were not (Table 3). 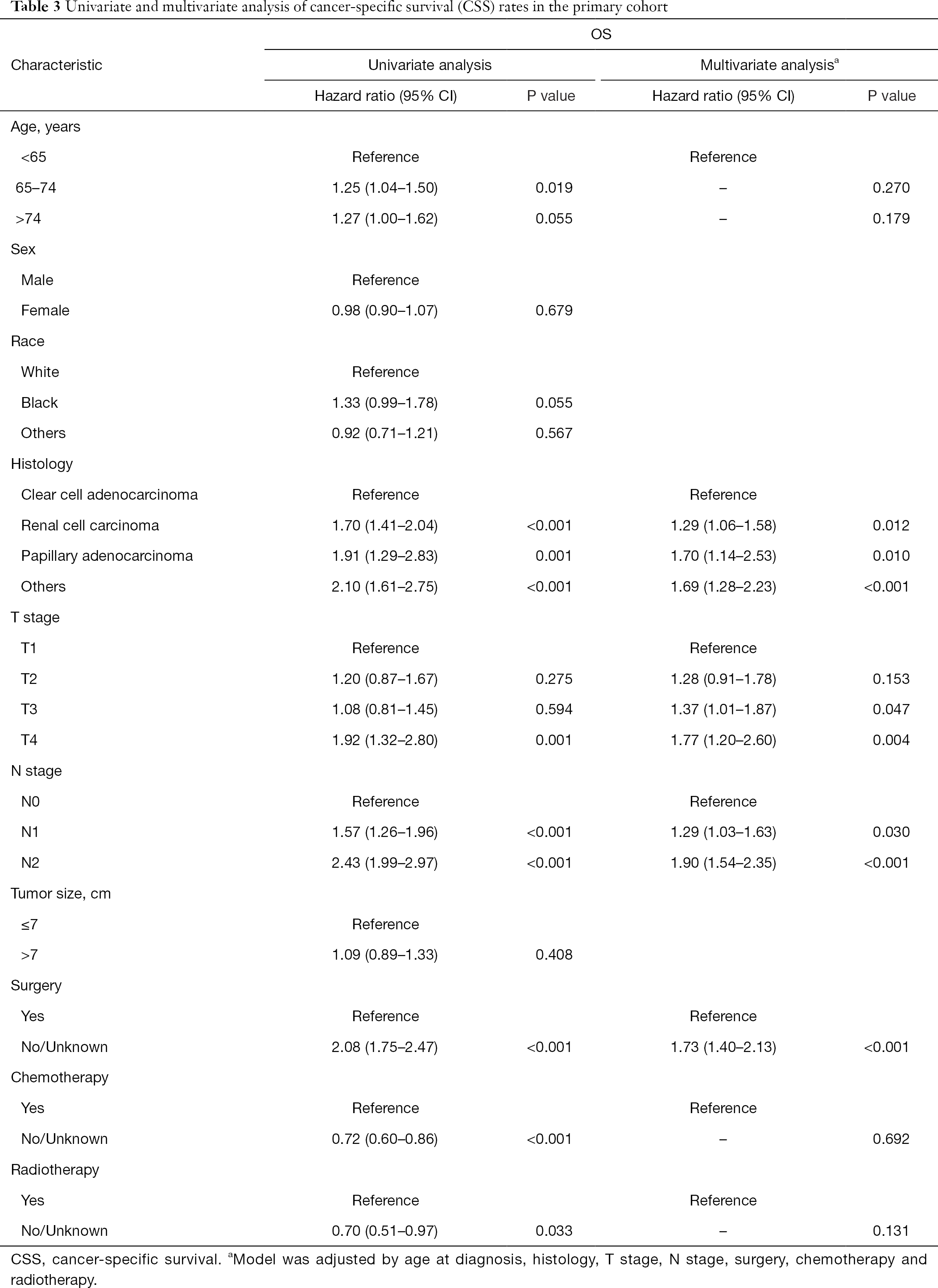 In the primary cohort, combined with the results of multivariate Cox regression analysis of OS and CSS in patients with lung metastatic RCC, we developed and established nomograms of OS and CSS that included all independent variables. Figure 2 shows the nomogram of the prognosis of 1-, 2- and 3-year OS and CSS. 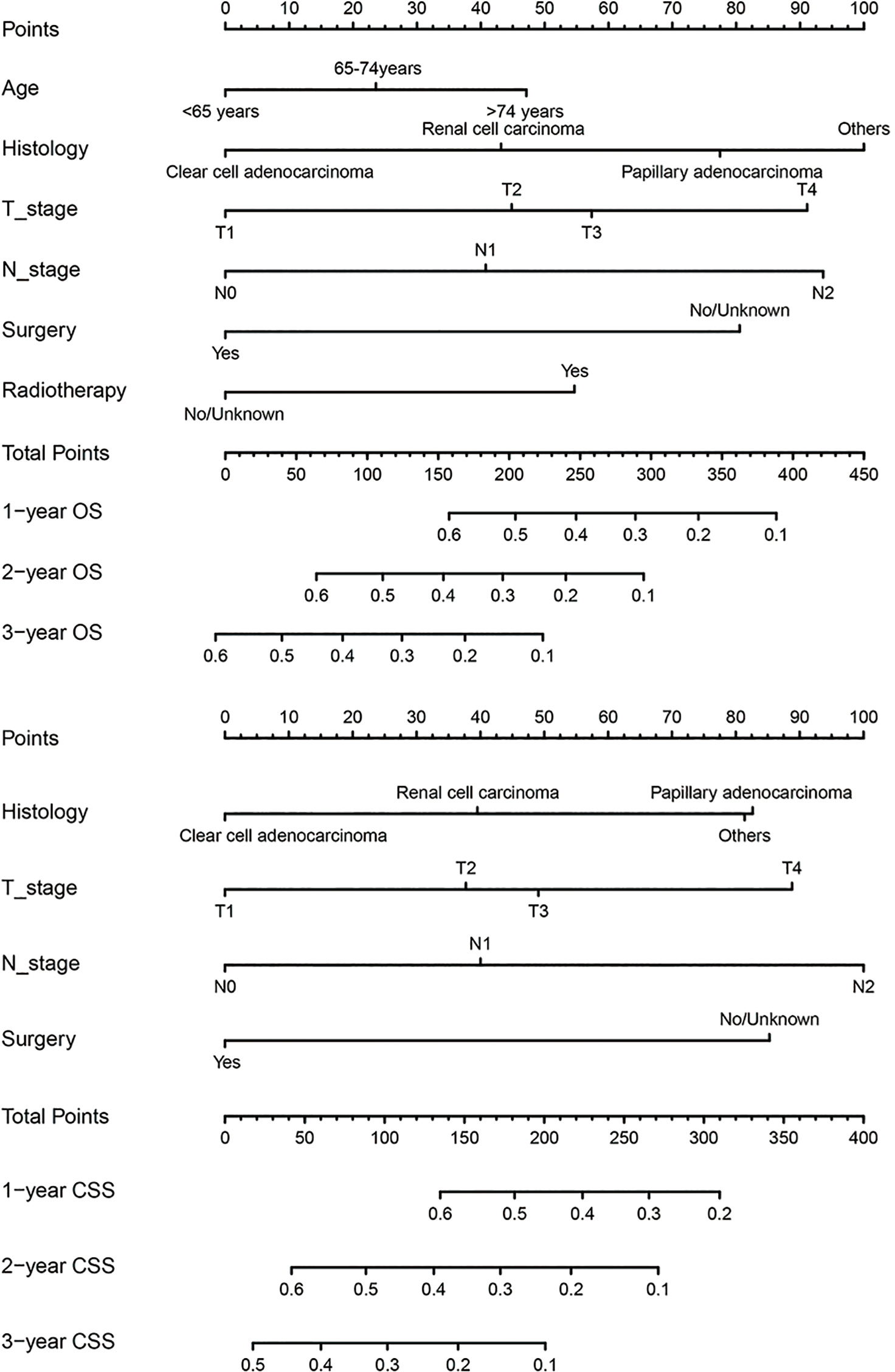 Validation and calibration of the nomograms 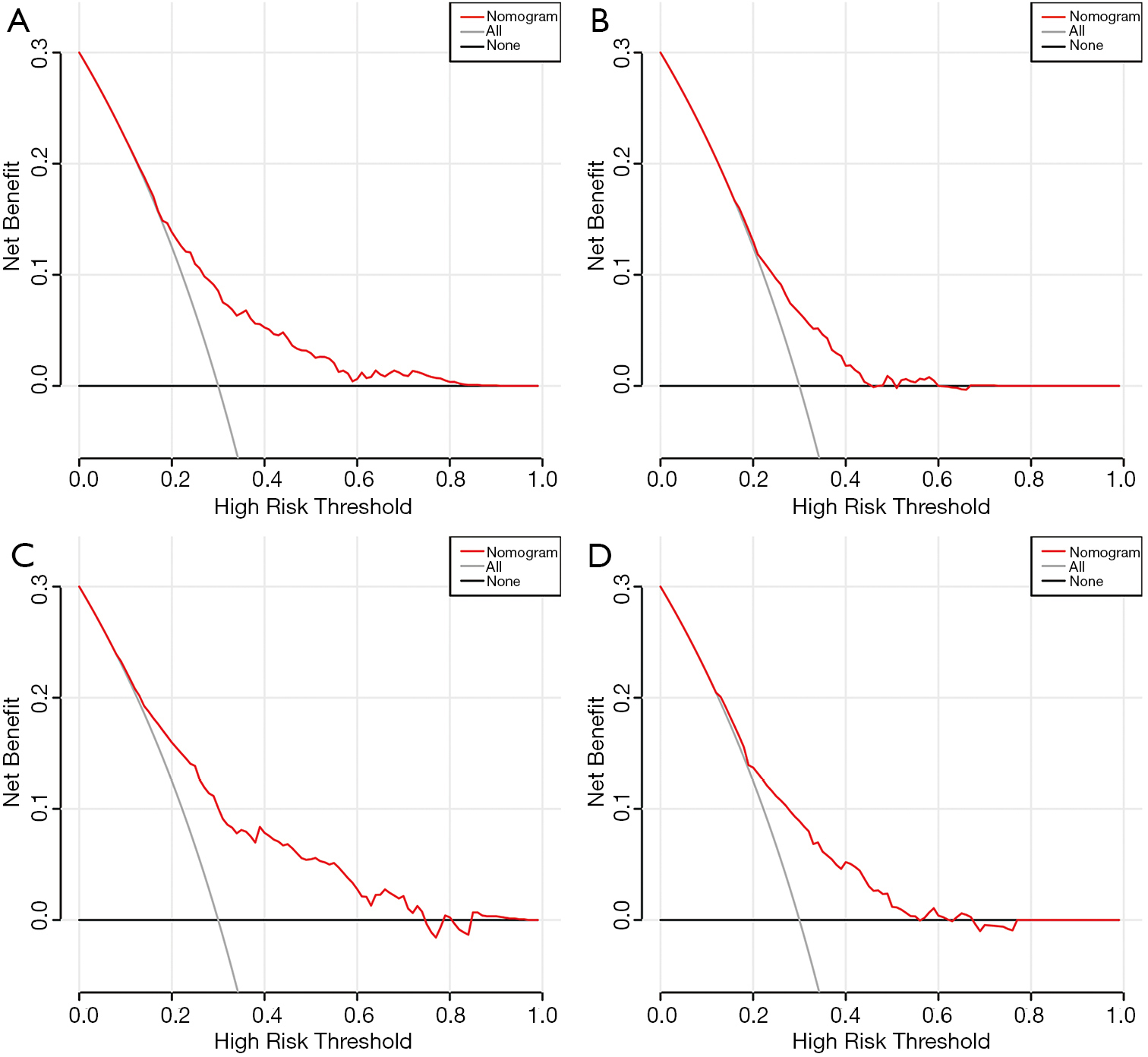 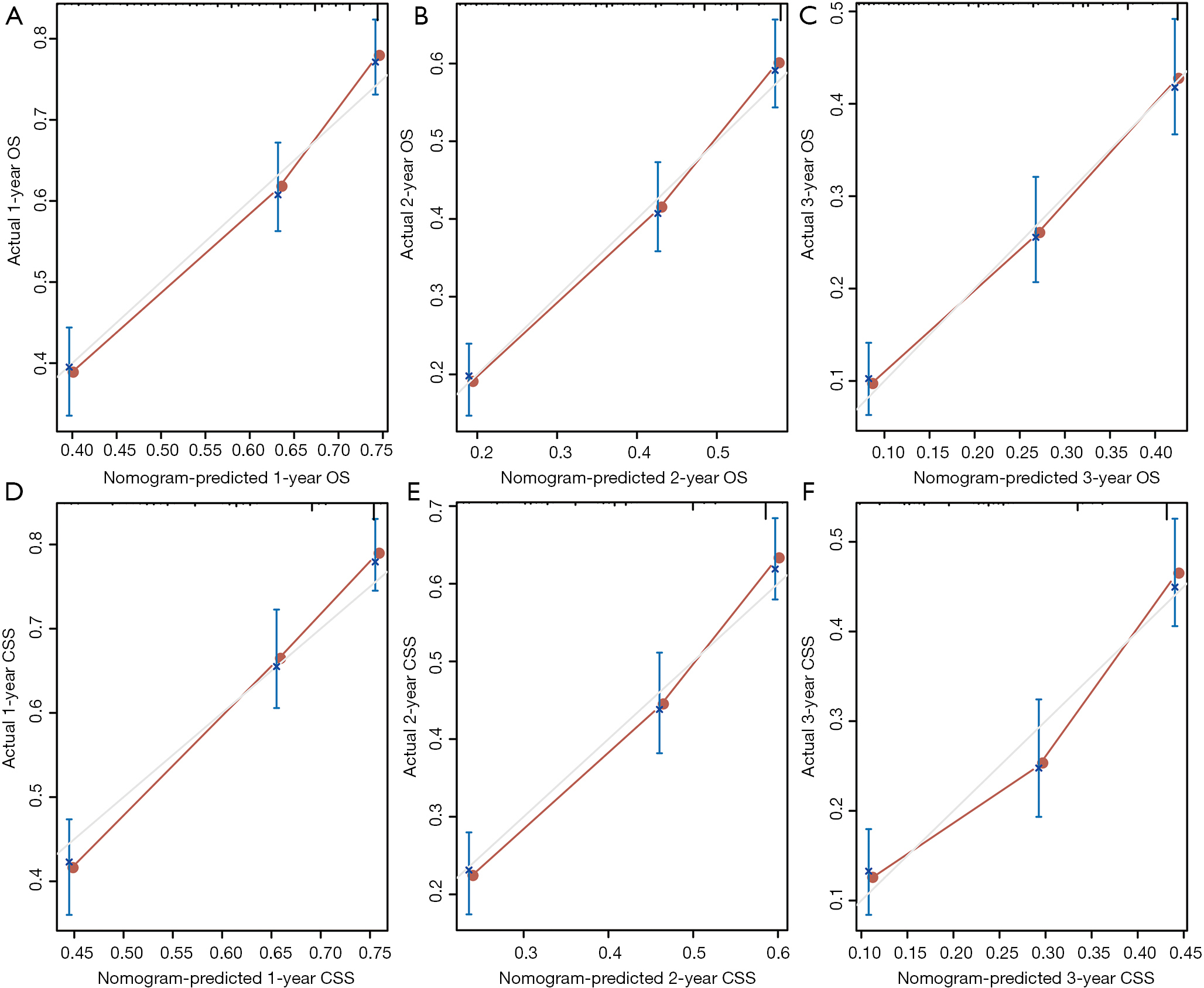 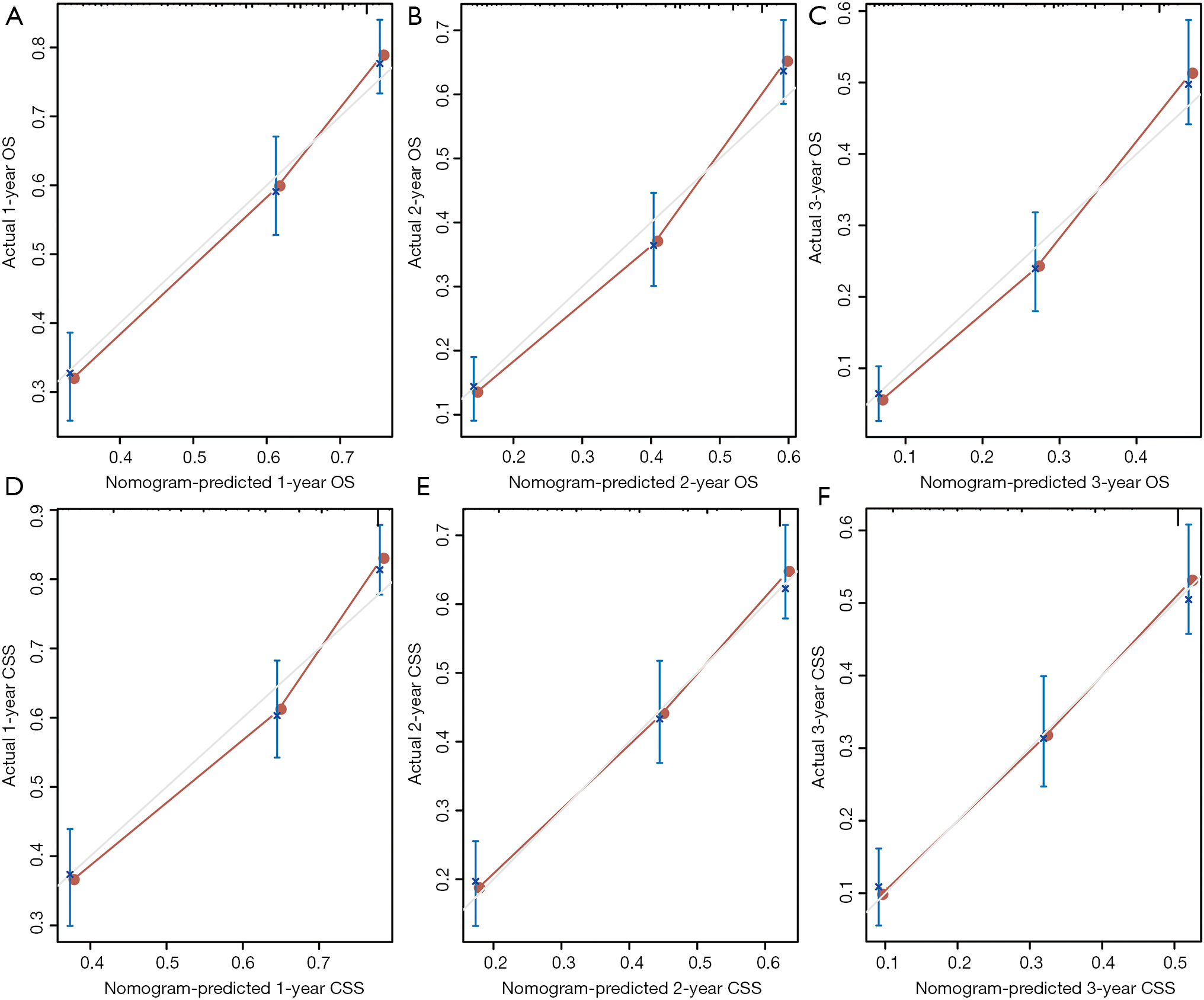 In our study, Cox regression analysis was performed on a large number of patients with lung metastatic RCC from the SEER database. It was found that age at diagnosis, histology, N-stage, T-stage, surgery and chemotherapy were independent risk factors for OS and while histology, N-stage, T-stage and surgery were independent risk factors for CSS in patients with lung metastatic RCC. Based on the above result, we developed and established a prognostic nomogram of lung metastatic RCC patients. In addition, we calibrated and verified the above-constructed prognostic nomograms and evaluated the accuracy of the OS and CSS prognostic nomograms for 1-, 2- and 3-year. The results showed good agreement between nomogram predictions and the actual observations, and good reliability in both primary and external validation cohorts.

The nomogram was an image representation based on the results of multivariate survival regression analysis, which makes various prognostic factors more intuitive (18,19). The model integrates multiple independent prognostic survival factors, allowing for a more focused evaluation of individual patient survival probabilities (20). To date, prognostic nomograms have been developed for many cancer types and showed a more accurate ability to predict the prognosis than the traditional TNM systems (21). In addition, nomograms allowed clinicians to assess patients' physical condition more intuitively to provide personalized predictions. Therefore, the establishment of a reliable and effective prognostic nomogram is of great significance for the prognosis of patients with lung metastatic RCC and to provide individualized treatment.

The nomogram has been widely used in various tumors of the urinary system, and is important for accurate prognosis prediction and individualized treatment (22). Some studies have found that the bladder cancer nomogram was better than the prognostic model using standard pathological grouping, which can better predict the risk of recurrence after radical cystectomy (23). Similarly, Graefen et al. (24) also found the accuracy of the preoperative prostate nomogram prediction for prostate cancer. Zhang et al. (13) developed a nomogram for patients with clear cell renal cell carcinoma, which could accurately predict the incidence of 3-, 5-, and 10-year of OS and disease-specific survival (DSS) in these patients.

There were some limitations to be recognized in the present study. First, the SEER database published information on liver, lung, bone, and brain-related organ metastases in 2010, follow-up was not long enough, and the degree and amount of lung metastasis were not available from the database. Second, the SEER database was a retrospective analysis and requires prospective studies for further validation. In addition, details of the type and duration of other adjuvant immunotherapies, targeted therapies, or systemic therapies were unclear. Moreover, information on patient complications or performance of metastasectomy was unclear.

We would like to thank three English experts, Jiatong Zhang, Dongyan Wang and Siwan Wang, for their language help.

Reporting Checklist: The authors have completed the TRIPOD reporting checklist. Available at http://dx.doi.org/10.21037/apm-20-1488

Conflicts of Interest: All authors have completed the ICMJE uniform disclosure form (available at http://dx.doi.org/10.21037/apm-20-1488). The authors have no conflicts of interest to declare.

Ethical Statement: The study was conducted in accordance with the Declaration of Helsinki (as revised in 2013). This article does not contain any studies with animals performed by any of the authors. The authors are accountable for all aspects of the work in ensuring that questions related to the accuracy or integrity of any part of the work are appropriately investigated and resolved.