Parkinson’s disease (PD) is a kind of central nervous system degenerative disease. Its main clinical manifestations are static tremor, bradykinesia and postural balance disorder. The typical pathological changes of PD include progressive and selective deaths of dopaminergic neurons in the substantia nigra of the midbrain, which induce a significant reduction of dopamine in the substantia nigra striatum pathways. The exact mechanism of selective death of dopaminergic neurons remains unknown, to date.

The progressive death of dopaminergic neurons is closely correlated to mitochondrial dysfunction. It has been found that the activity of mitochondrial complex I in the substantia nigra of PD patients is generally lower by 30-40%, when compared to normal subjects, and this is accompanied by increased local oxidative stress in the substantia nigra (1,2). Experiment results have suggested that oxidative stress is related to the pathological process of PD (3,4). The coding products of nine familial PD pathogenic genes have been identified either as mitochondrial proteins themselves, or functionally correlated to mitochondria (5,6). Therefore, the protection of mitochondrial function, the prevention or reversal of mitochondrial dysfunction and the series of subsequent harmful reactions may provide more direct and effective treatment strategies and approaches for the clinical prevention and treatment of PD.

The investigators confirmed in a previous study that polygonum cuspidatum resveratrol liposome can significantly improve the behavioral abnormalities of 6-hydroxydopamine (6-OHDA)-induced Parkinsonized model rats, increase the number of cells, neurons and dopaminergic neurons in the substantia nigra, reduce cell apoptosis rates, improve the total antioxidant capacity of tissues, and reduce the total activity of reactive oxygen species (ROS) in tissues (7).

The general view is that resveratrol contains three hydroxyl groups, has a strong antioxidant activity as the basis of its pharmacological effects (8,9), and has a strong neuroprotective effect (10-14). It has been reported that resveratrol can repair the pathological damage of the blood-brain barrier (15,16). Meanwhile, some studies have confirmed that resveratrol can cross the blood-brain barrier, plays an antioxidant and anti-inflammatory role, and protects the blood-brain barrier and brain nerve of experimental animals (17,18). However, the medical dosage of resveratrol does not appear to be able to completely neutralize the oxygen free radical molecules formed in Parkinsonized model rats in the pathological state. Thus, it is speculated that there may be other mechanisms on the positive effects of resveratrol on mitochondria in the substantia nigra cells of Parkinsonized rats. In view of this, the present study determined whether resveratrol liposomes have direct effects on the mitochondrial function of substantia nigra cells in Parkinsonized model rats, in order to preliminarily reveal the targets of resveratrol in neuroprotection, and provide ideas for the clinical development of new drugs for treating neurodegenerative diseases, such as PD.

Polygonum cuspidatum decoction pieces (Hubei Pharmaceutical Company, China) were crushed, pretreated with cellulase enzymatic hydrolysis, roughly extracted by ethanol heating reflux method, separated and refined by AB-8 macroporous adsorption resin, purified by silica gel column and recrystallized by acetone. The acicular crystals were confirmed to be resveratrol monomer by melting point determination and high-performance liquid chromatography (HPLC) detection of the mixture with the control. The purity is over 99%. Soybean lecithin and cholesterol were accurately weighed in proper proportion (imported by Shanghai Dongshan Technology Co., Ltd., batch number 20060905, China). Resveratrol liposomes were prepared by thin film dispersion method. The encapsulation efficiency was 93.52%. TEM2000 transmission electron microscopy showed that most of the liposomes were spherical or elliptical, with particle sizes ranging 146–585 nm, and pH value of 6.87±0.13. The results of pharmacokinetic tests in mice and HPLC showed that the serum concentration of resveratrol liposome was higher than that of resveratrol at the same time, and the half-life of resveratrol liposome was longer than that of resveratrol (19,20).

One hundred male Wistar rats, weighing 180–210 g, were provided by the Experimental Animal Center of Tongji Medical College, Huazhong University of Science and Technology (Lot number: TJLA-2006-043). These rats were randomly divided into five groups: normal group, sham operation group, model group, blank liposome group and resveratrol liposome group (n=20, each). The methods for model establishment and administration were based on a previous experiment (7). Experiments were performed under a project license (No. 2020060101) granted by Animal Use Committee of Beijing Institute of traditional Chinese medicine, in compliance with international, national or institutional guidelines for the care and use of animals.

After deep anesthesia, the rats were quickly decapitated, and the brain was obtained and placed on an ice tray. Then, the midbrain was quickly separated and frozen in liquid nitrogen for subsequent testing.

Concentrated gum concentration was 5%, separation gum concentration was 12%, and protein sample size was 20 µg. After electrophoresis, the protein was transferred to PVDF membrane by electro-transfer method. Tris-Buffered Saline and Tween 20 (TBST) containing 5% skimmed milk powder (0.1% Tween-80, 100 mmol/L Tris, 0.9% NaCl pH 7.5) was used for overnight blocking. The first anti-Goat complex1 antibody (24-51 kD, 1:500, SANTA, SC-20493) was diluted with 0.2 µg/mL, incubated at room temperature for 2 hours, the second anti-rabbit anti goat IgG was diluted at a ratio of 1:1,000 and incubated at room temperature for 1 h.

Western blot was used to detect cytochrome C in mitochondria and cytoplasm respectively.

Concentrated gum concentration was 5%, separation gum concentration was 12%, and protein sample size was 20 µg. After electrophoresis, the protein was transferred to PVDF membrane by electro-transfer method. TBST containing 5% skimmed milk powder (0.1% Tween-80, 100 mmol/L Tris, 0.9% NaCl pH 7.5) was used for overnight blocking. The antibodies against the detected proteins were incubated at room temperature for 2 h, and the corresponding antibodies were incubated at room temperature for 1 h.

According to the operation instructions, tissue homogenate was lysed to obtain protein samples, and non-specific binding was removed by normal mouse IgG. TRAP1 protein was precipitated by Mouse HSP75/TRAP1 antibody (BD, 1:50) and Protein A+G Agarose (Santa Cruz). After washing, centrifugation and supernatant removal, TRAP1 protein was added to 40 µL of x sodium dodecyl sulfate polyacrylamide gel electrophoresis (SDS-PAGE) gel. The samples were centrifuged to the bottom of the tube by instantaneous high-speed centrifugation. The samples were treated in a boiling water bath for 5 minutes. SDS-PAGE was performed. The first antibody was Rabbit Phosphose antibody (CHEMICON, AB1603) detected by Western blot. The band was phosphorylated TRAP1. 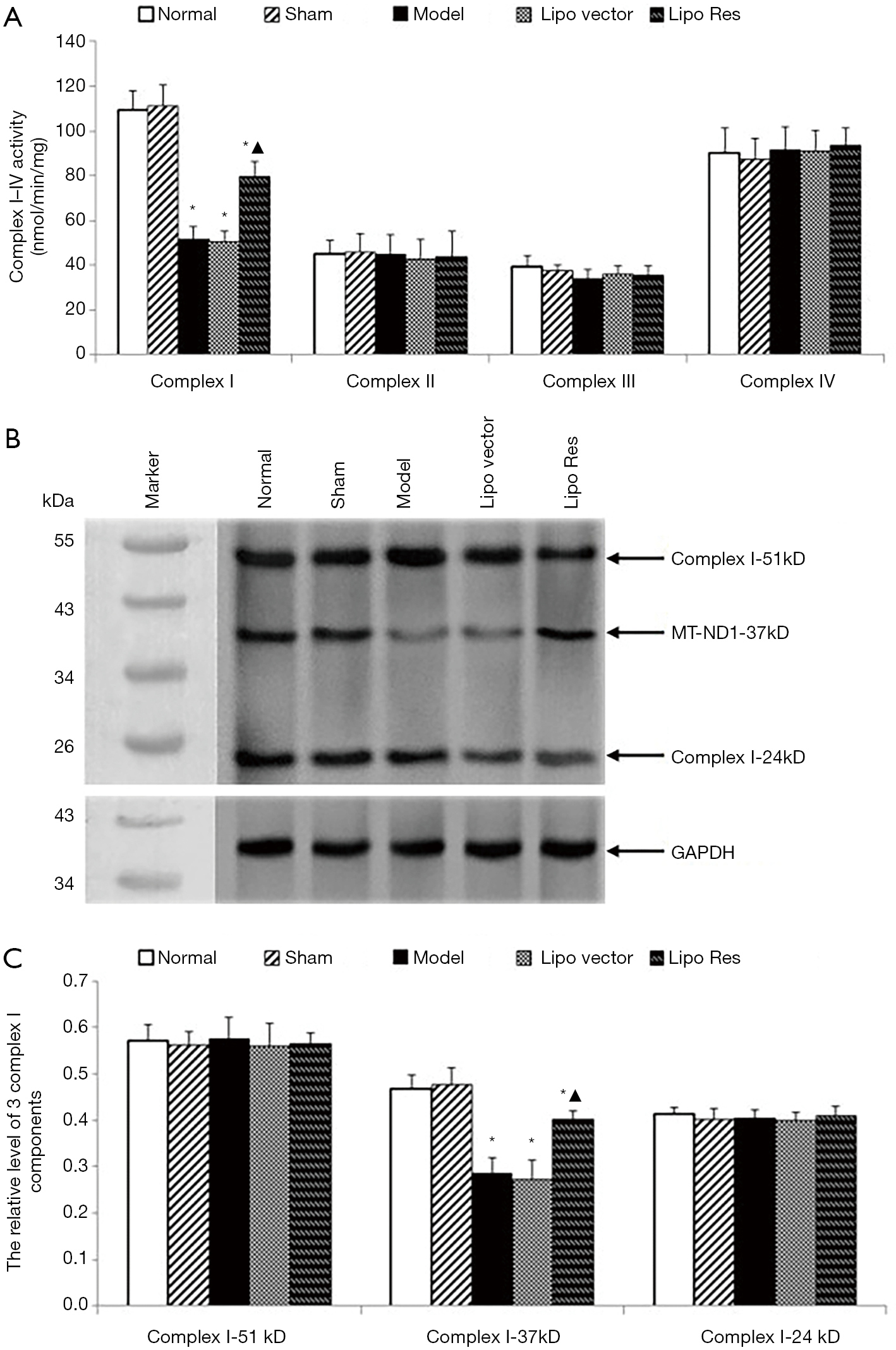 Figure 1 The activities of mitochondrial complexes I-IV and levels of the three subunits of complex I in substantia nigra cells in rats in the groups. (A) Mitochondria were extracted from the substantia nigra of rats in all groups, and the activities of complexes I-IV were determined by ultraviolet spectrophotometry. (B) Proteins were extracted from substantia nigra of rats in all groups, the relative contents of complex I-51kD, complex I-24kD, MT-ND1-37kD, which are the three subunits of complex I, were determined by Western blot, with glyceraldehyde-3-phosphate dehydrogenase (GAPDH) as an internal control. (C) The relative content of mitochondrial subunits complex I-51 kD, complex I-24 kD and MT-ND1-37kD in the substantia nigra in rats in the different groups. All result data were expressed as mean ± standard deviation (mean ± SD). *Compared with the normal group and sham operation group, P<0.01; ▲Compared with the model group and blank liposome group, P<0.01.

The Western blot detection results of the three components of mitochondrial respiratory chain complex I [NADH dehydrogenase (ubiquinone) flavin protein 1, NADH dehydrogenase (ubiquinone) flavin protein 2, and NADH dehydrogenase subunit 1] were as follows: the levels of complex I-51kD and complex I-24kD encoded by nuclear genes were not significantly different among the groups, while the level of MT-ND1-37kD encoded by mitochondrial DNA significantly decreased in the model group. After two weeks of intervention with resveratrol liposome, the level of MT-ND1-37kD significantly increased in substantia nigra cells in PD model rats (Figure 1B,C). 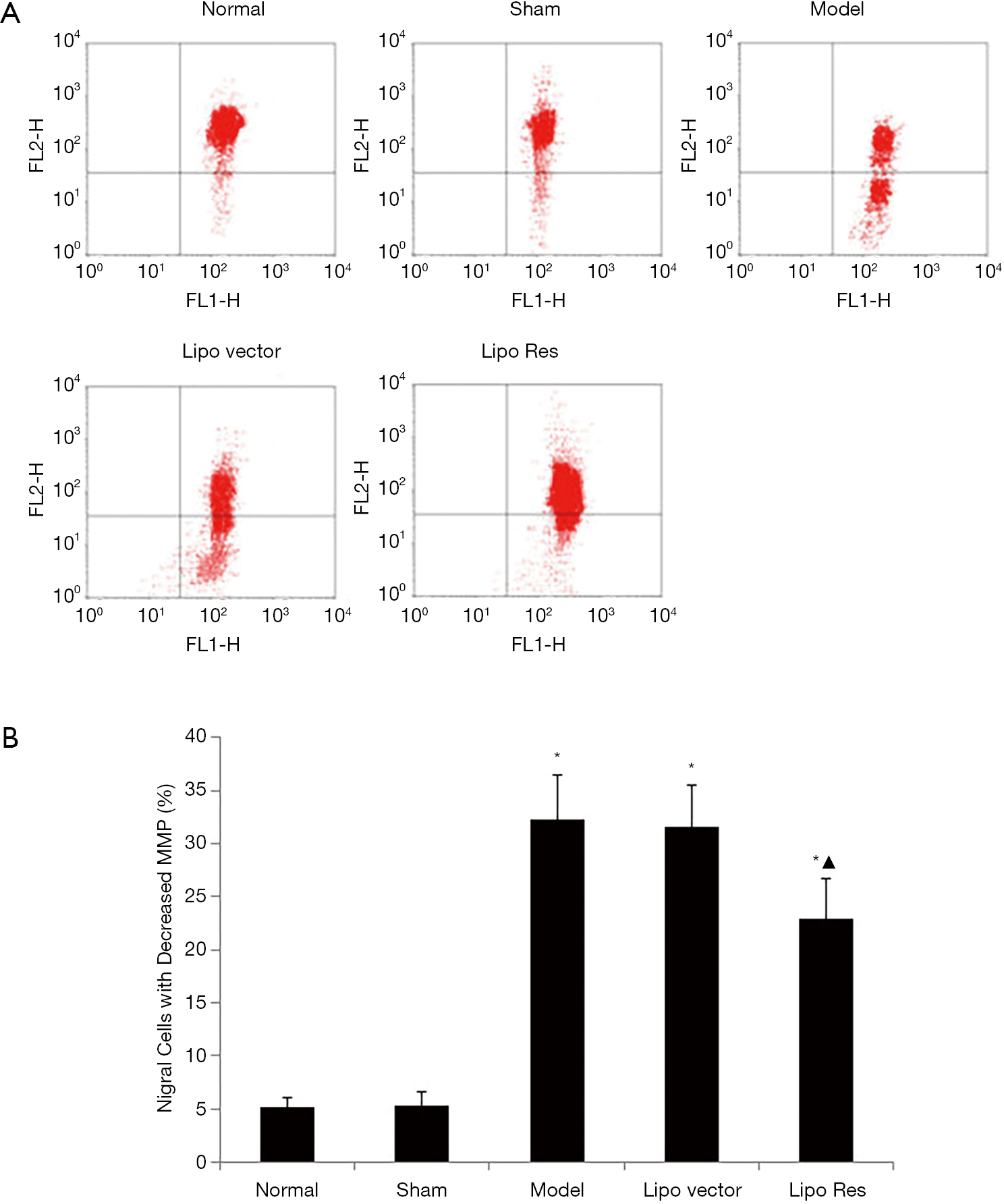 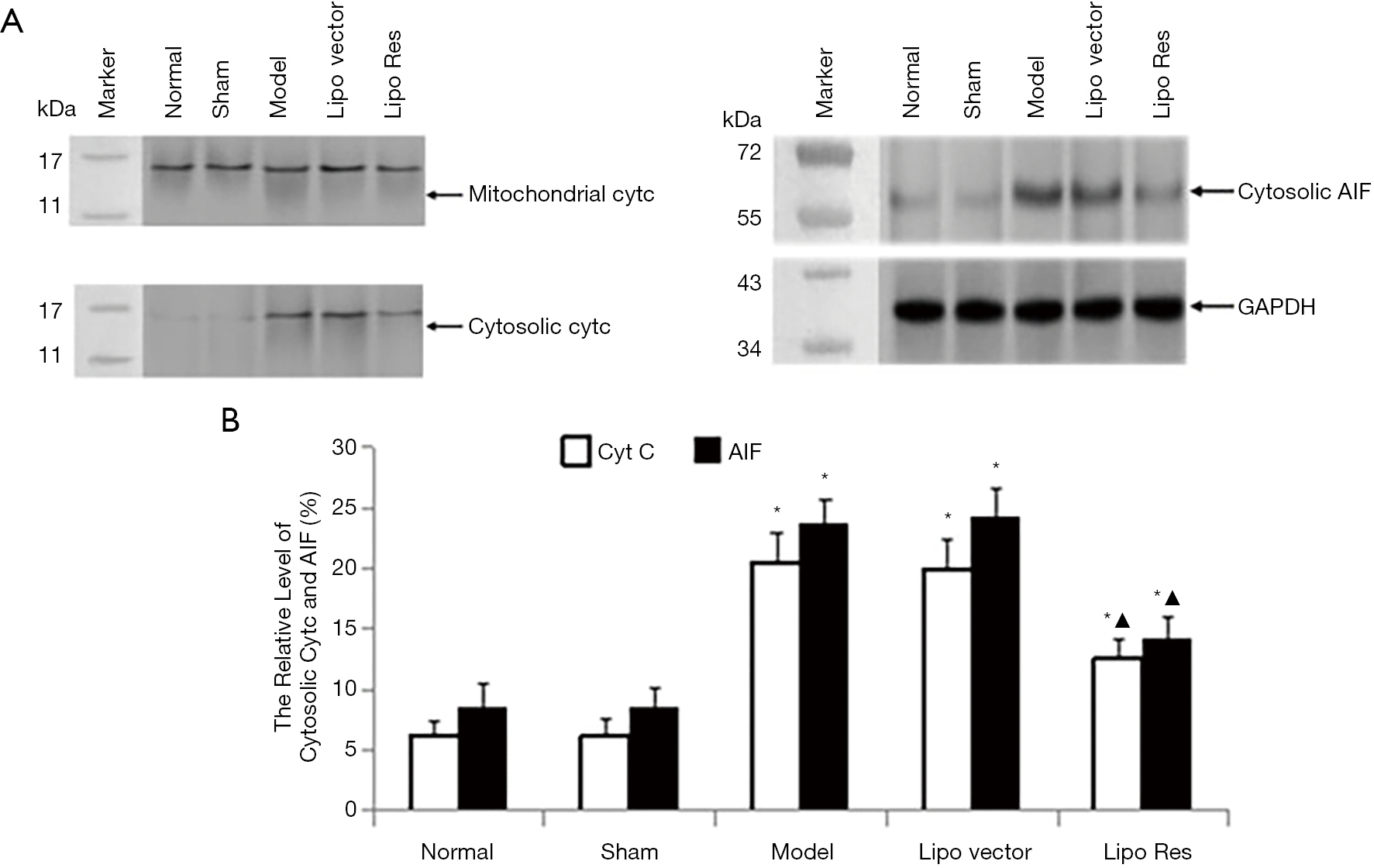 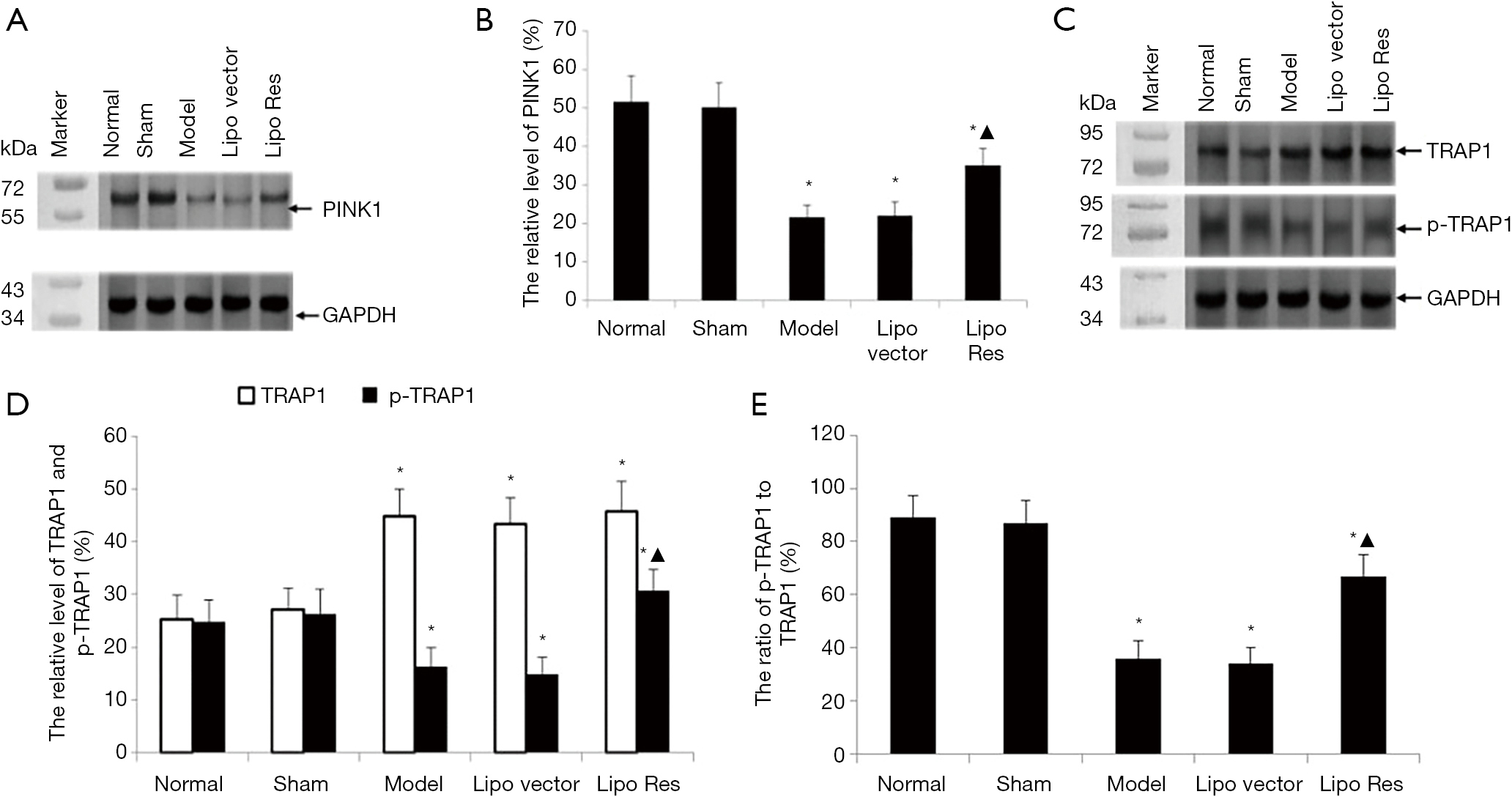 Some studies have confirmed that the mitochondrion was the integration center and executor of apoptotic signals, which initiates and completes the process of cell apoptosis, when various apoptotic factors accumulate to a certain extent (22). Therefore, the functional state of mitochondrion is an important factor in determining the fate of dopaminergic neurons in the substantia nigra in the pathogenesis of PD.

Previous studies revealed that PINK1 could maintain the normal mitochondrial membrane potential (28). TRAP1 has been proven to be closely correlated to the maintenance of normal mitochondrial function (29). Recent studies have revealed that TRAP1 may be the kinase substrate of PINK1, and that the maintenance effect of PINK1 on the mitochondrial membrane potential depends on the kinase activity of PINK1 to TRAP1 (28). The investigators observed in the experiment that resveratrol liposomes could increase the levels of PINK1 and phosphorylated TRAP1 in substantia nigra cells in PD model rats, and elevate the phosphorylated TRAP1/TRAP1 ratio, which may be one of the molecular bases of the protective mitochondrial function of resveratrol liposomes in substantia nigra cells in Parkinsonized rats.

However, there are some limitations in our experiments. The present study is an experimental study of rats, and its experimental results may be biased from those in the human body. Furthermore, the sample size of the experimental rats was small. Hence, if a large sample study is conducted, there may be inconsistencies between the results of that study, when compared to the present study. Although many literatures have dealt with the research results of resveratrol in the treatment of encephalopathy, the permeability and drug concentration of resveratrol and resveratrol liposomes in the blood-brain barrier and the relationship between the therapeutic effect and blood drug concentration remain unknown. These problems would be discussed and investigated by our research team in the future.

Conflicts of Interest: All authors have completed the ICMJE uniform disclosure form (available at http://dx.doi.org/10.21037/apm-19-426). The authors have no conflicts of interest to declare.

Ethical Statement: The authors are accountable for all aspects of the work in ensuring that questions related to the accuracy or integrity of any part of the work are appropriately investigated and resolved. Experiments were performed under a project license (No. 2020060101) granted by Animal Use Committee of Beijing Institute of traditional Chinese medicine, in compliance with international, national or institutional guidelines for the care and use of animals.